The two old codgers had gone to bed early so they were wide awake by 06:00 hrs! We Bears slept on.
The each made themselves a hot drink from the bar in the corridor, Chris tea, Alan coffee and chatted while slowly getting ready!
In the night, our BBF (Bestest Best Friend) had woken to attend to a call of nature, when he noticed that the socket where he had plugged in his mobile phone, his Garmin watch and his phone power pack was not working! 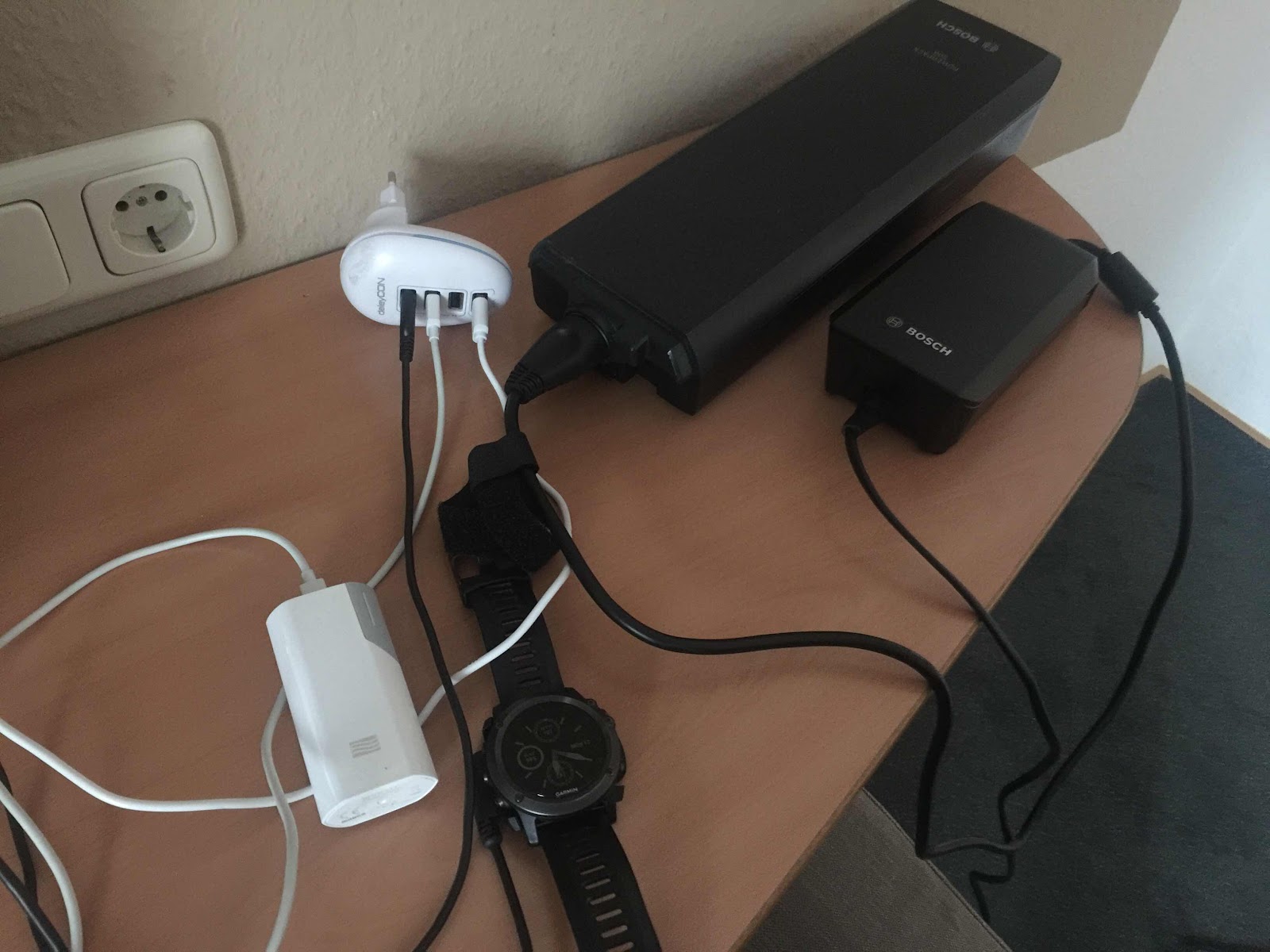 We Bears have to say that you humans do have a problem with the care of the planet! You are all totally dependent on electricity. If also like our BBF you are a Gadget geek, you are a hopeless case and will find it impossible to live CO2 neutral! In fact (Jamie speaking) I can remember that on our circumnavigation, power consumption and battery charging was one of Alan’s bug bears, if you excuse the pun!
Our sail boat at sea had navigation lights, cabin lights, a fridge, VHF Radio, an HF SSB Radio and a laptop. These necessary gizmos need power. The worst consumption was caused by the fridge and the navigation lights at night!
Now we are not sailing, but cycling our BBF and Chris need access to a power point at night! Without one they would be lost and we have to admit that we couldn’t write a Blog either!
Fortunately Alan noticed this charging problem and switched all the gadgets to socket that worked before going back to bed. 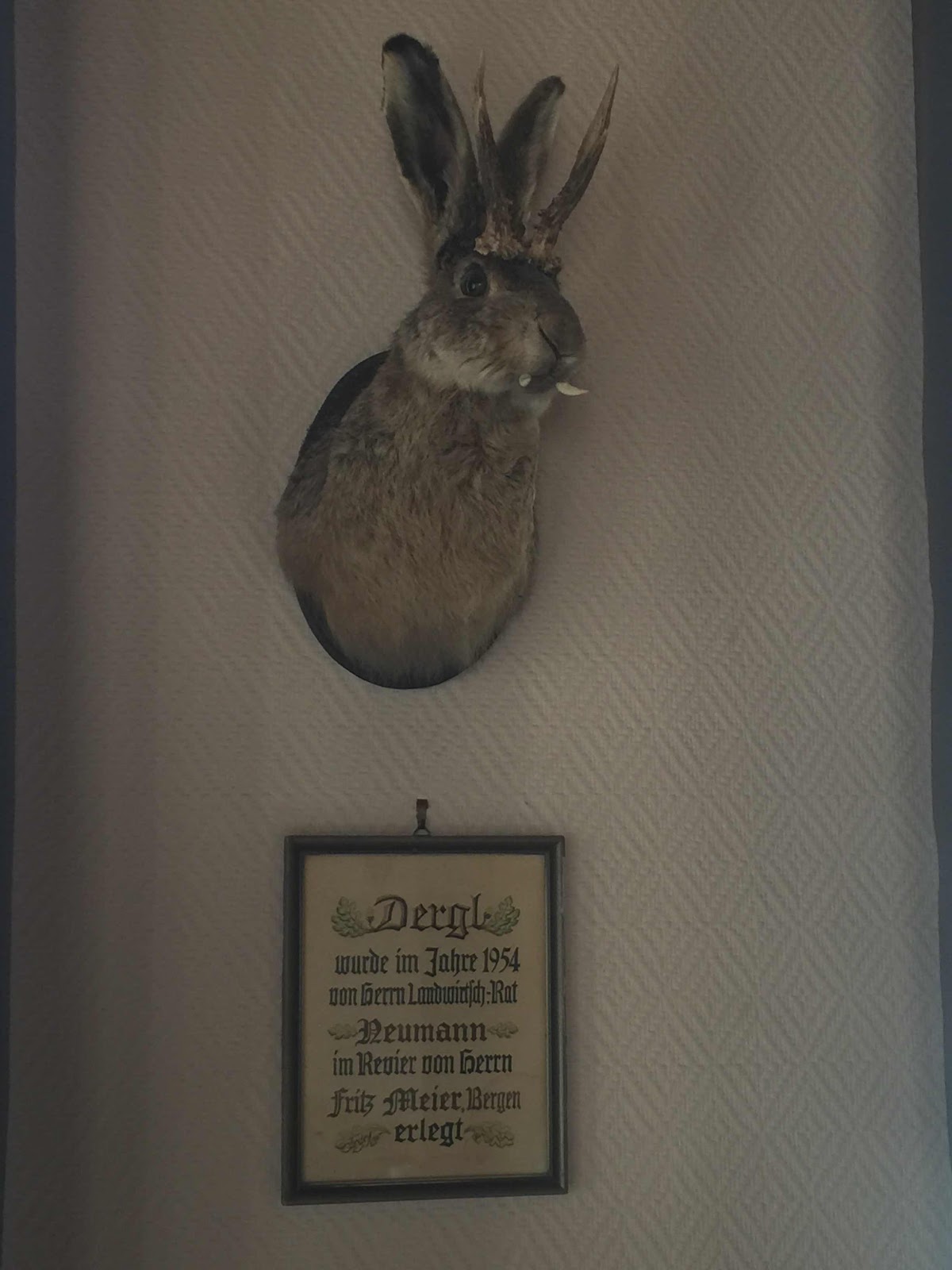 This morning at breakfast the humans were surprised to see it his hunting trophy of Dergl, supposedly shot in 1954! We just think the taxidermist was drunk at the time! 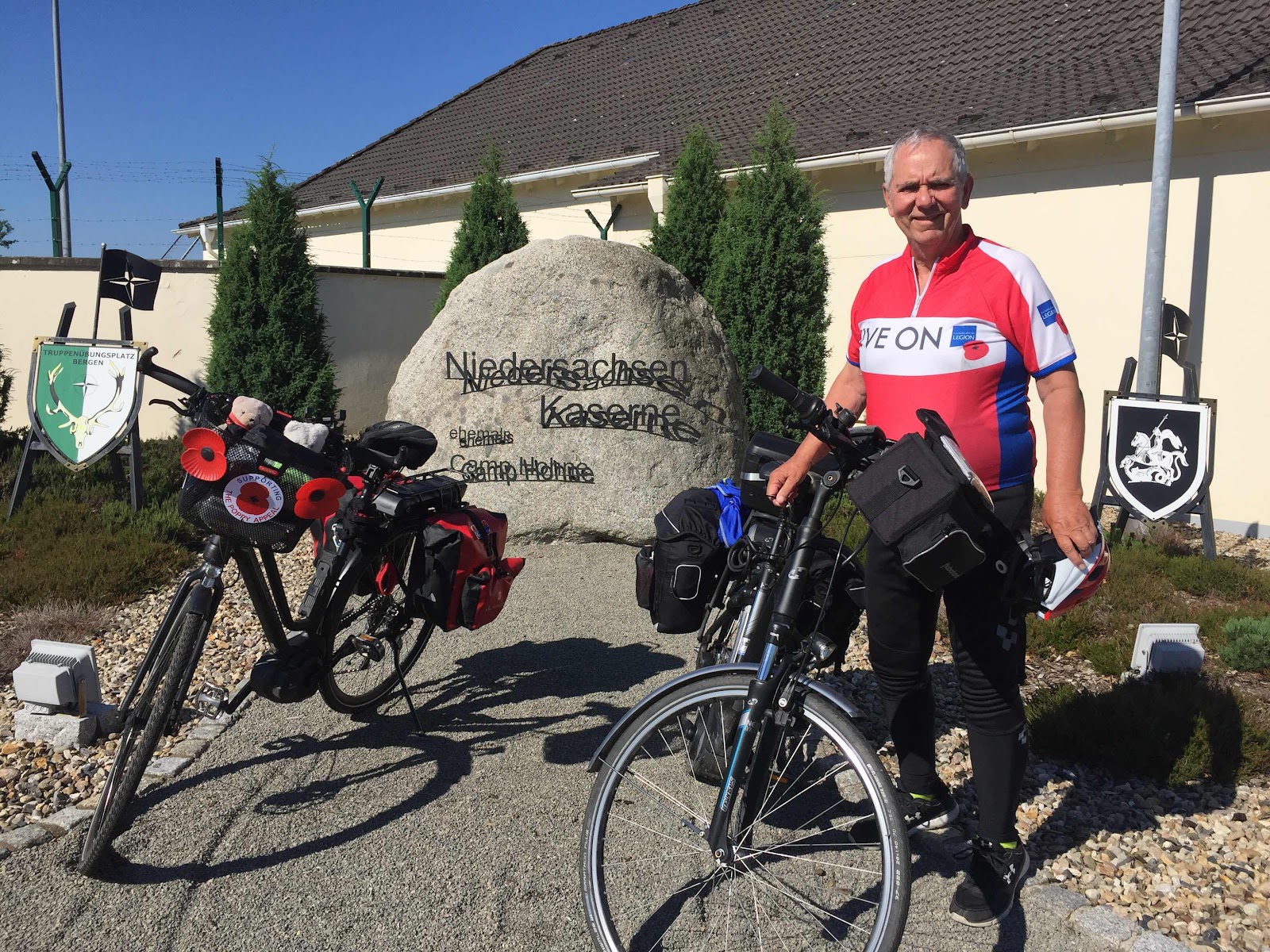 After breakfast we set off and rode towards Belsen. We paused at the Stone outside the entrance to what was once known as Hohne Camp to take pictures. Alan was the Officer Commanding 8 Pioneer Labour Support Unit in the 80’s and Bergen’s second largest employer. In fact he was tasked with amalgamating 7 PLSU, which was based in VERDEN and was responsible for Fallingbostel, and 8 PLSU into one unit and as a consequence employed 4,500 civilians from the Harz Mountains to the Danish Border! 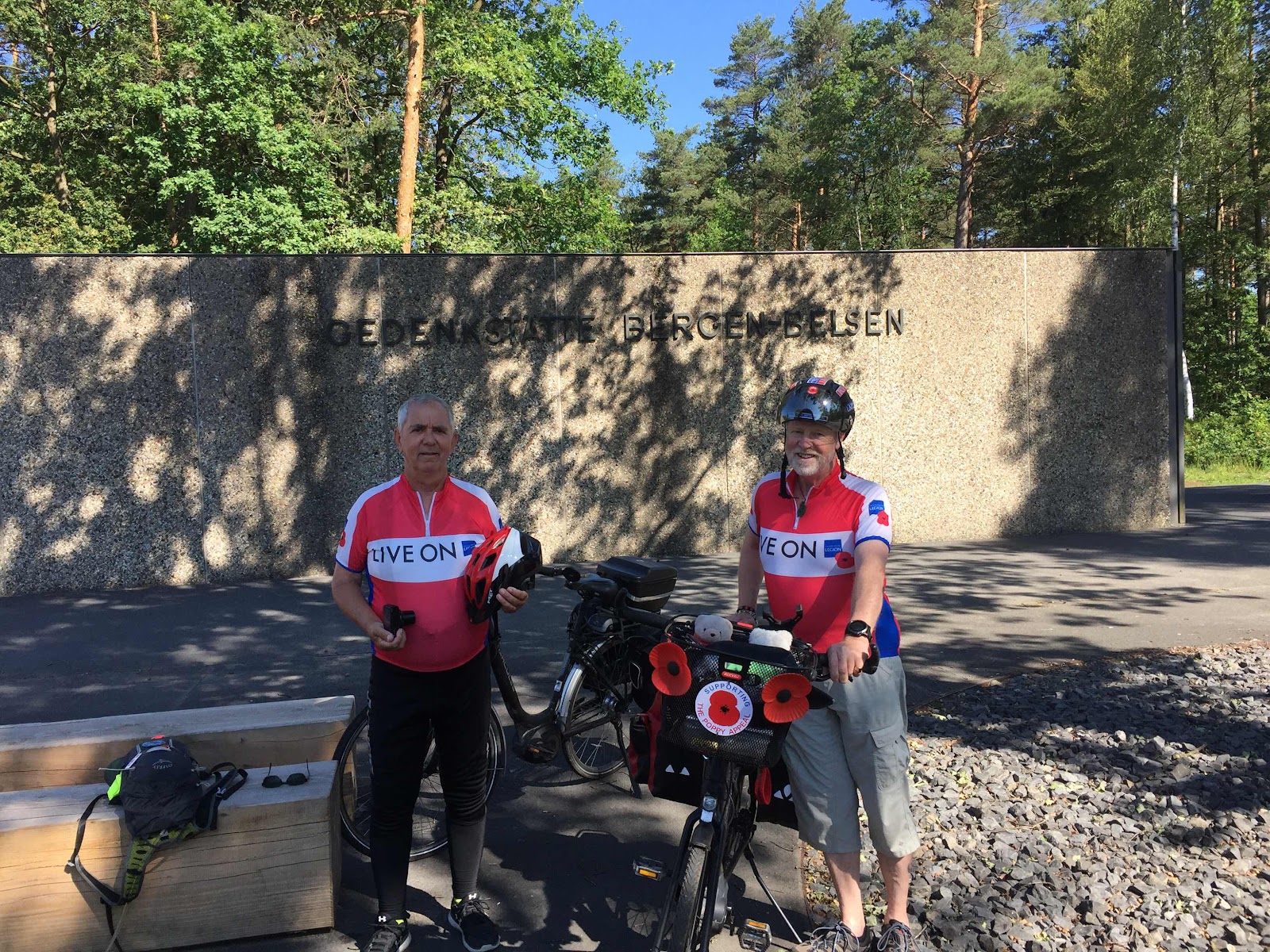 We rode on to the Belsen memorial where more photos were taken. 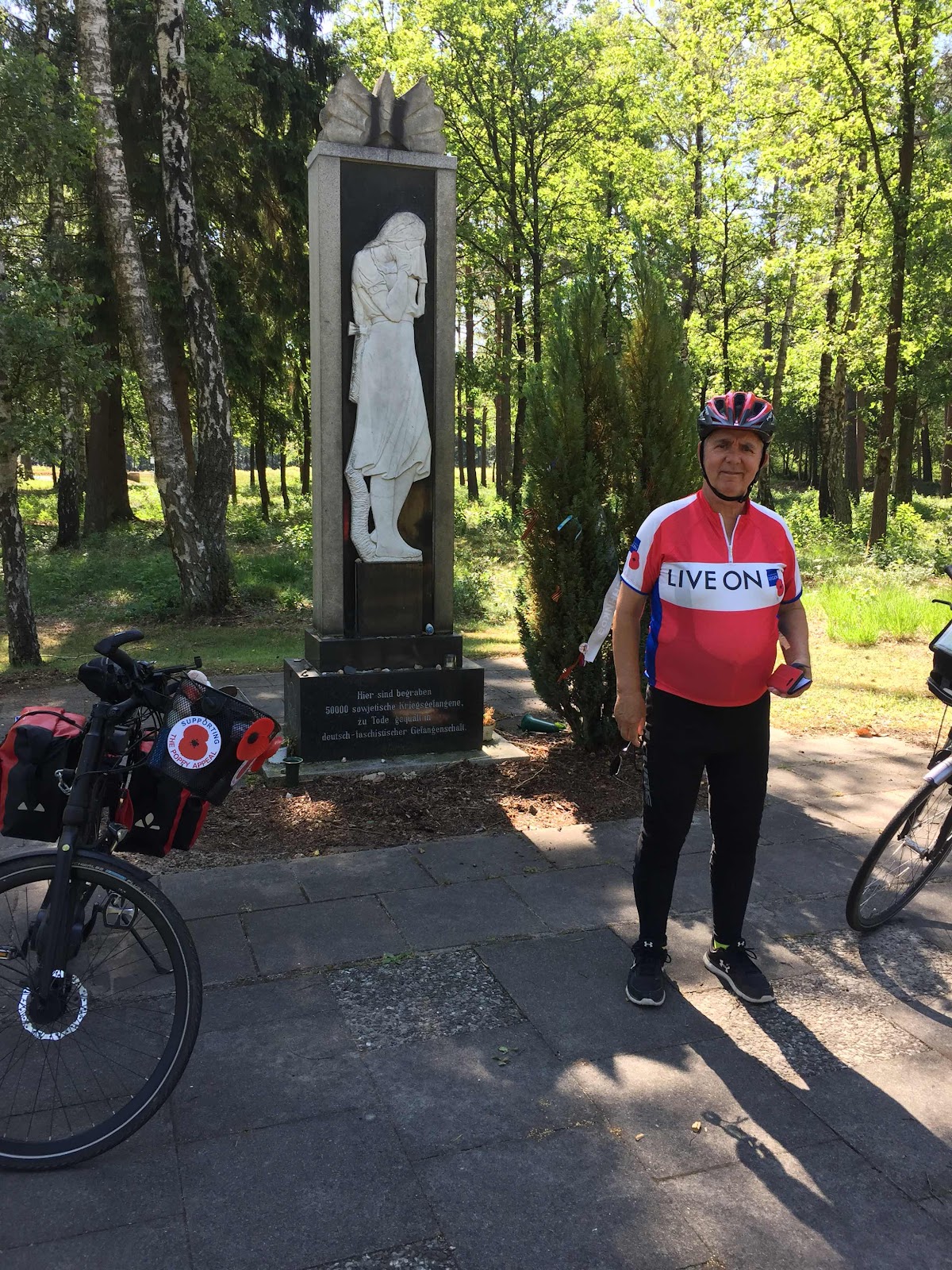 Our route also took past the Soviet POW cemetery so we had a stop there too! 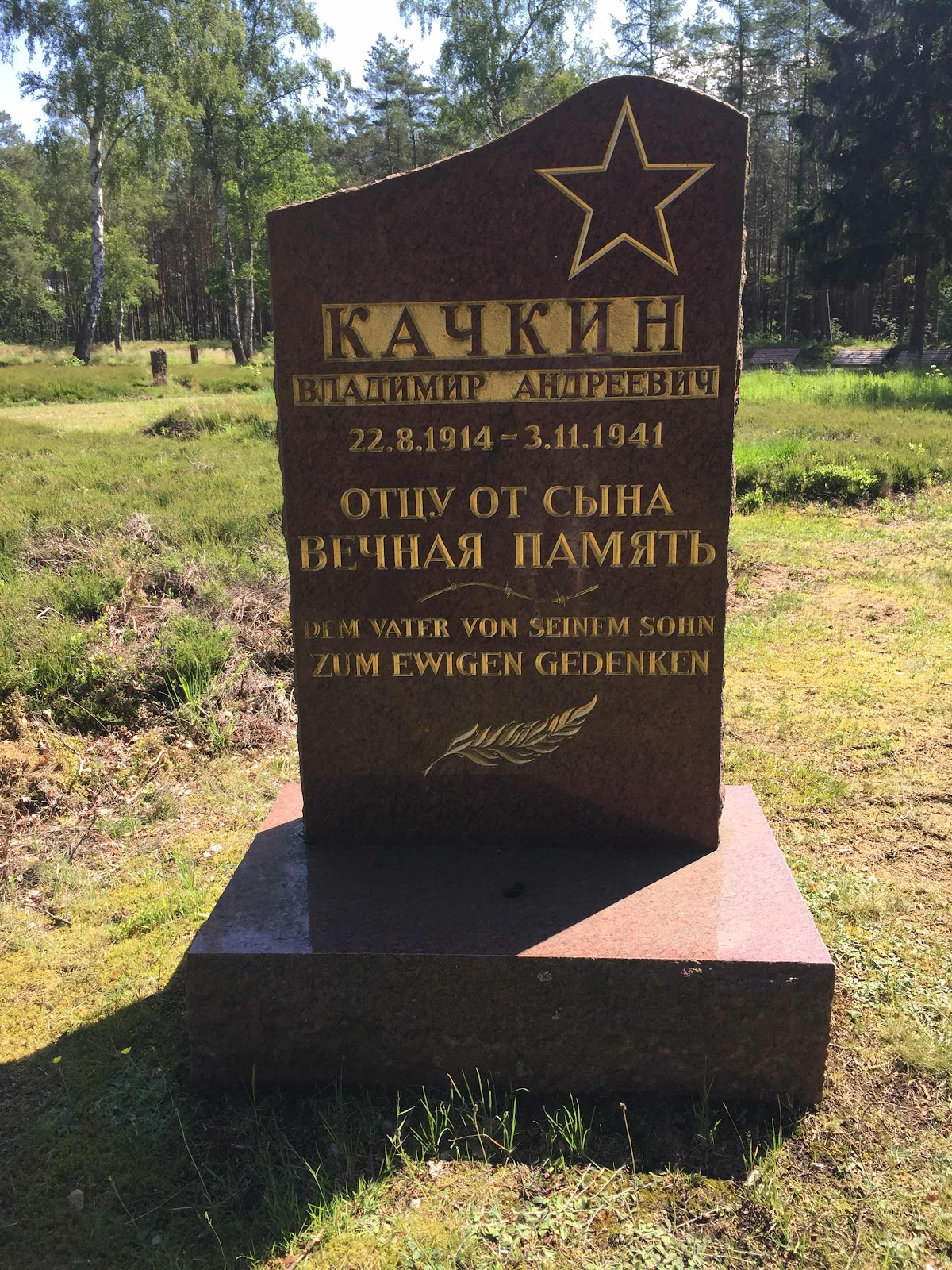 A minimum of 19580 Soviet Prisoners are buried here in Hörsten. It is a quiet place and makes one reflect on man‘s inhumanity to man! 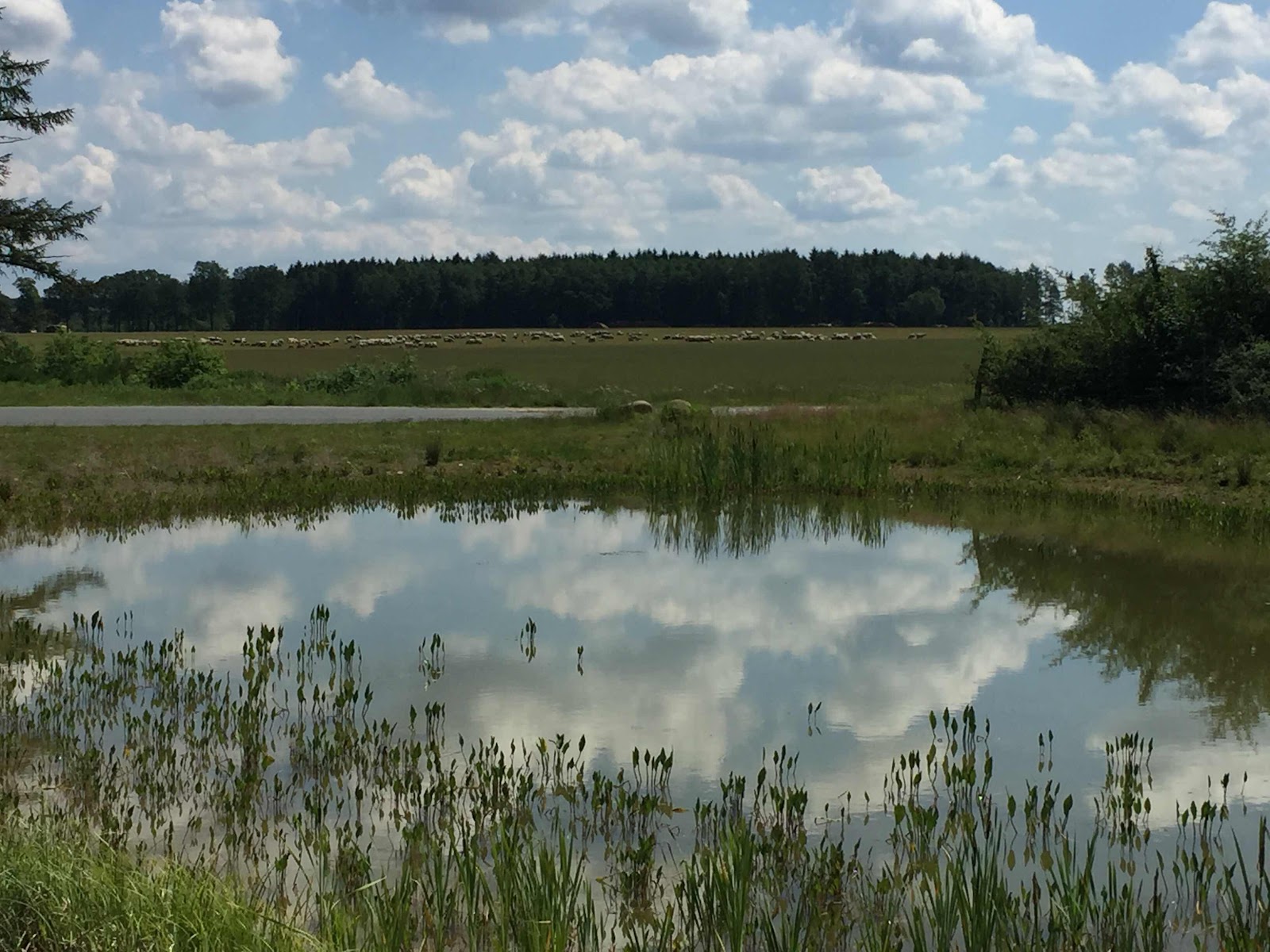 It was a lovely day to be out cycling. There was the scent of pine in the air and occasionally, as we were on a Road that circumnavigated the Live Firing Ranges the sound of heavy machine guns and the smell of cordite! Alan was in his element! He last was here in 1989 when the last Canadian Army Trophy Tank Gunnery Competition was held by HQ Northern Army Group, another unit he served in. 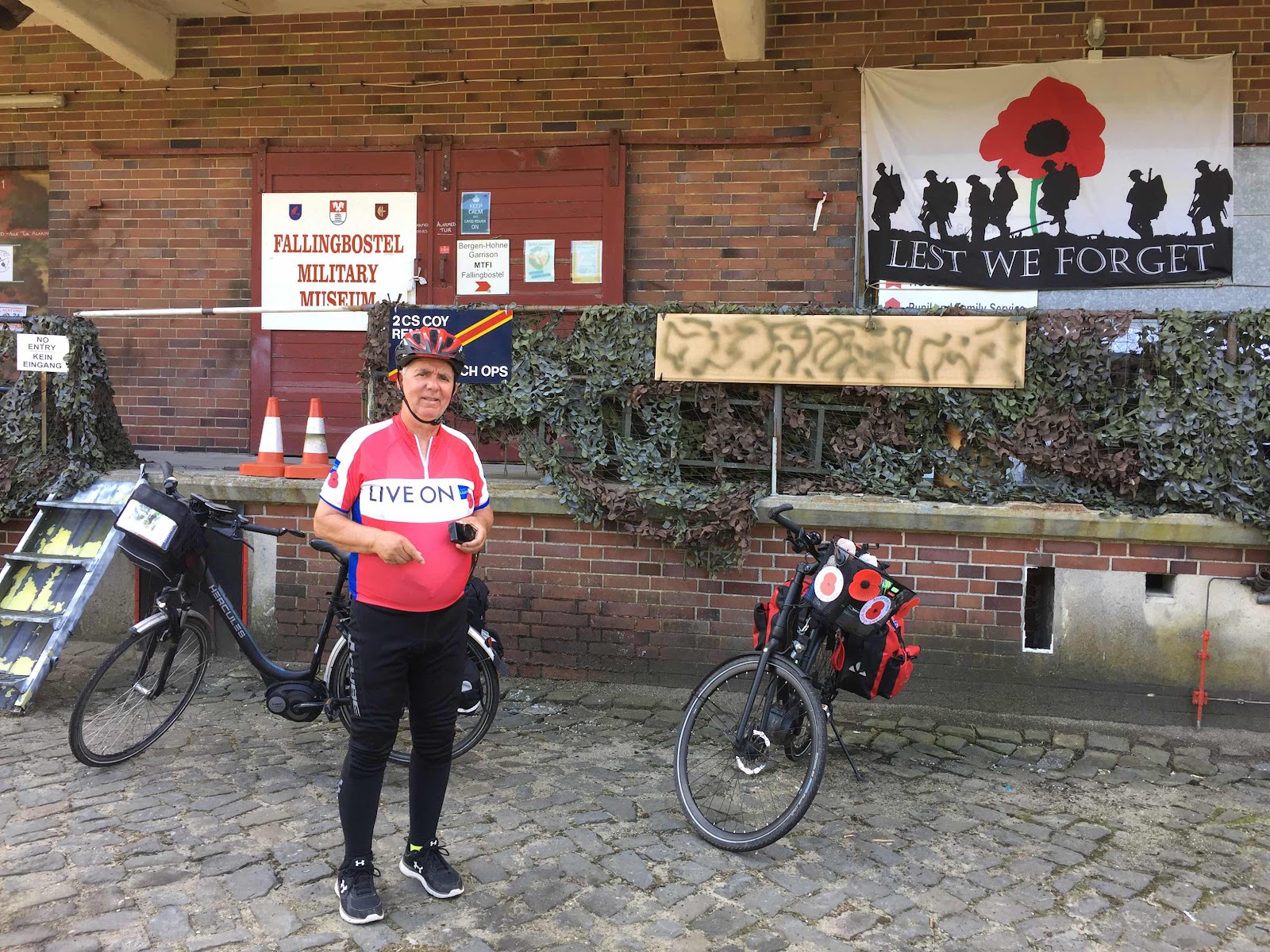 We passed the Fallingbostel Military Museum, which sadly was closed! 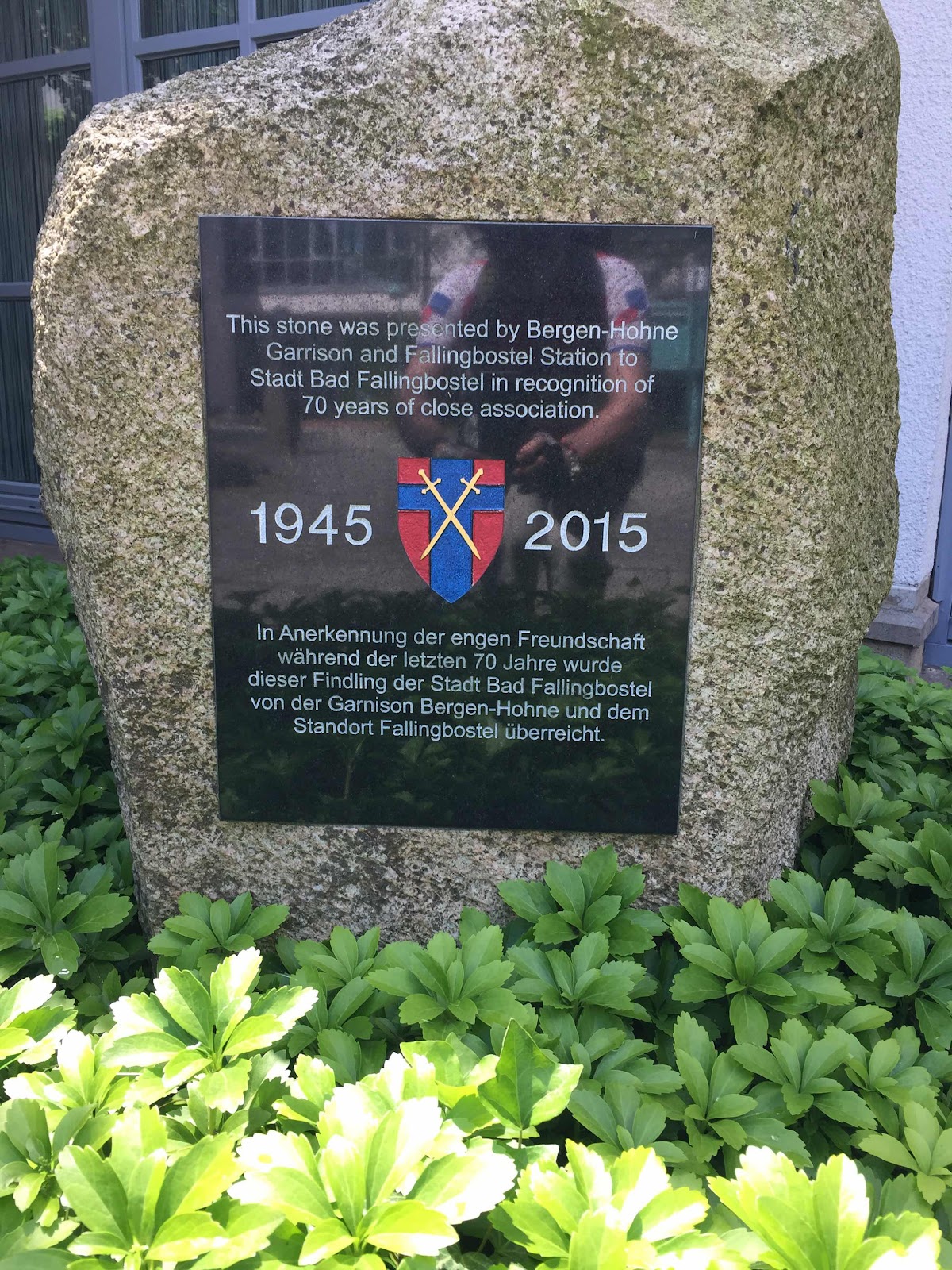 In Fallingbostel we sought out the Tourist Information Office which found US suitable accommodation for the night! 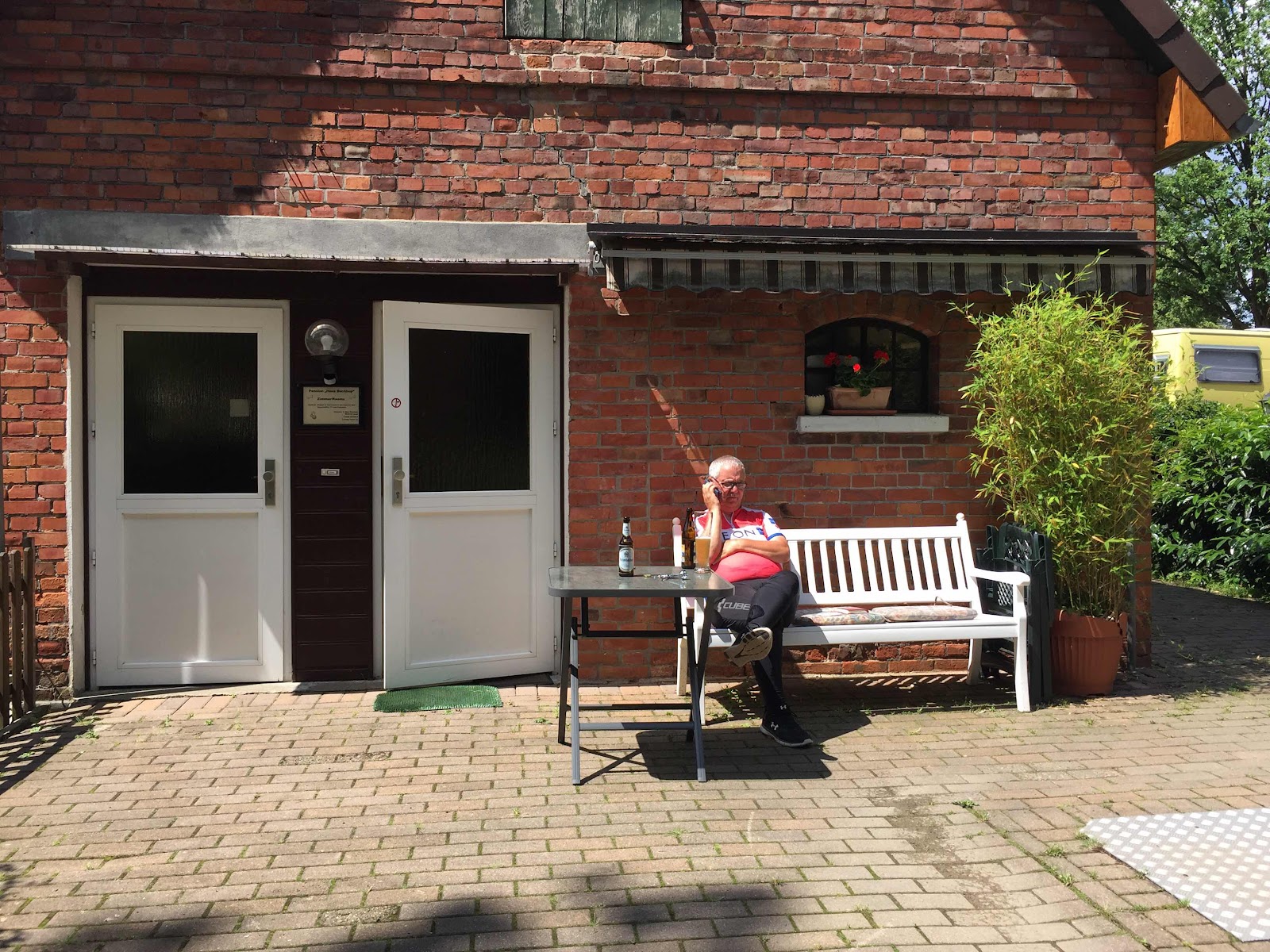 A relaxing isotonic drink was had and calls made to home.
It is hard to imagine a better end to the day!
Posted by Alan Tyson-Carter at 16:10