A Fun Ride to Paderborn! 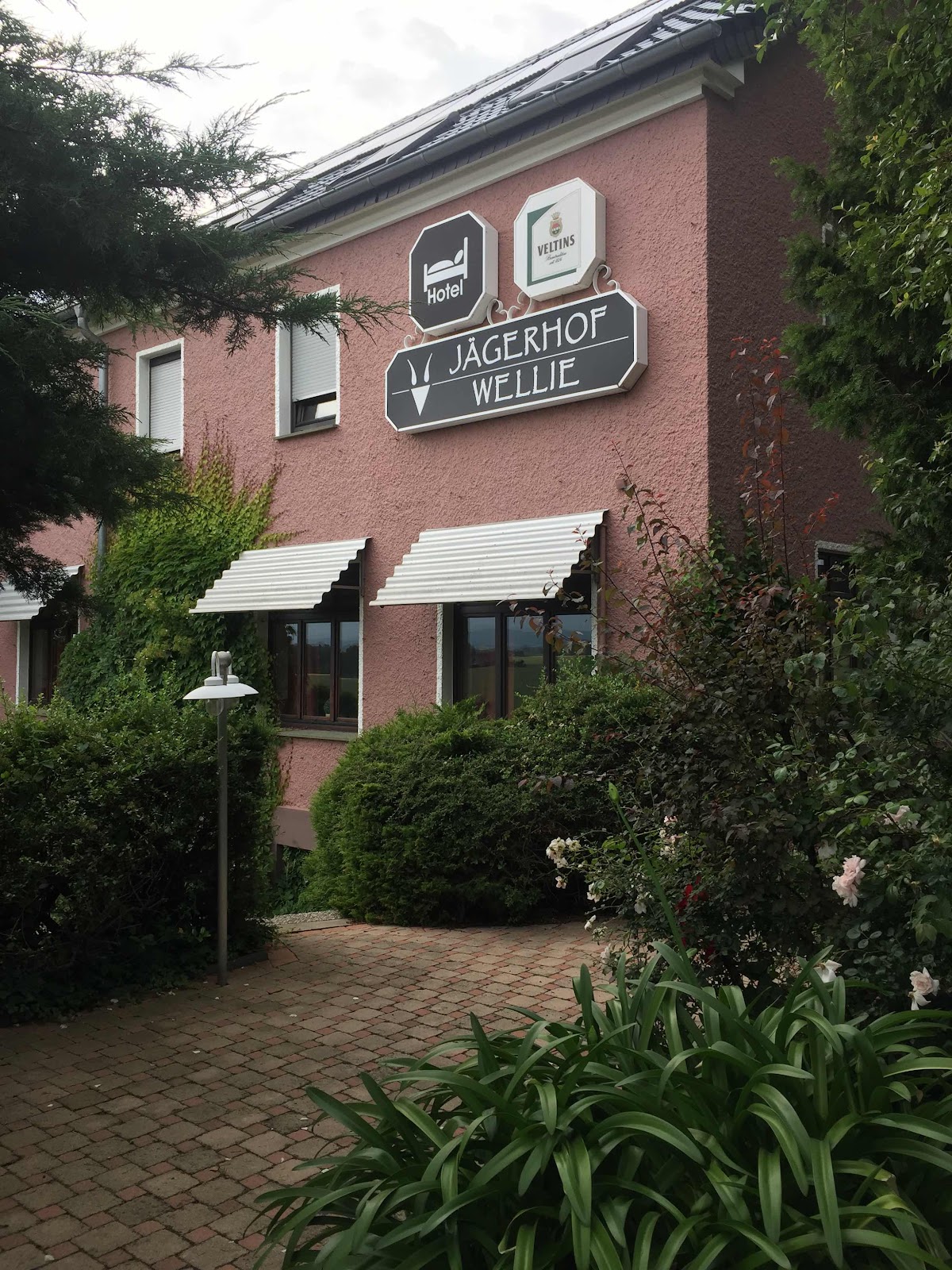 The humans slept well, so well that our BBF was woken only by Chris going to breakfast! He was up in in a flash, had a cat lick and a promise for a wash and rushed out to join Chris in the breakfast room.
As we did not have far to go to meet the Lippe RBL Branch there was no real rush now.
We set off on a fine day with blue skies and fluffy white clouds. There was a hill to go up, but generally the going was easy. The boys took their time and enjoyed the ride. 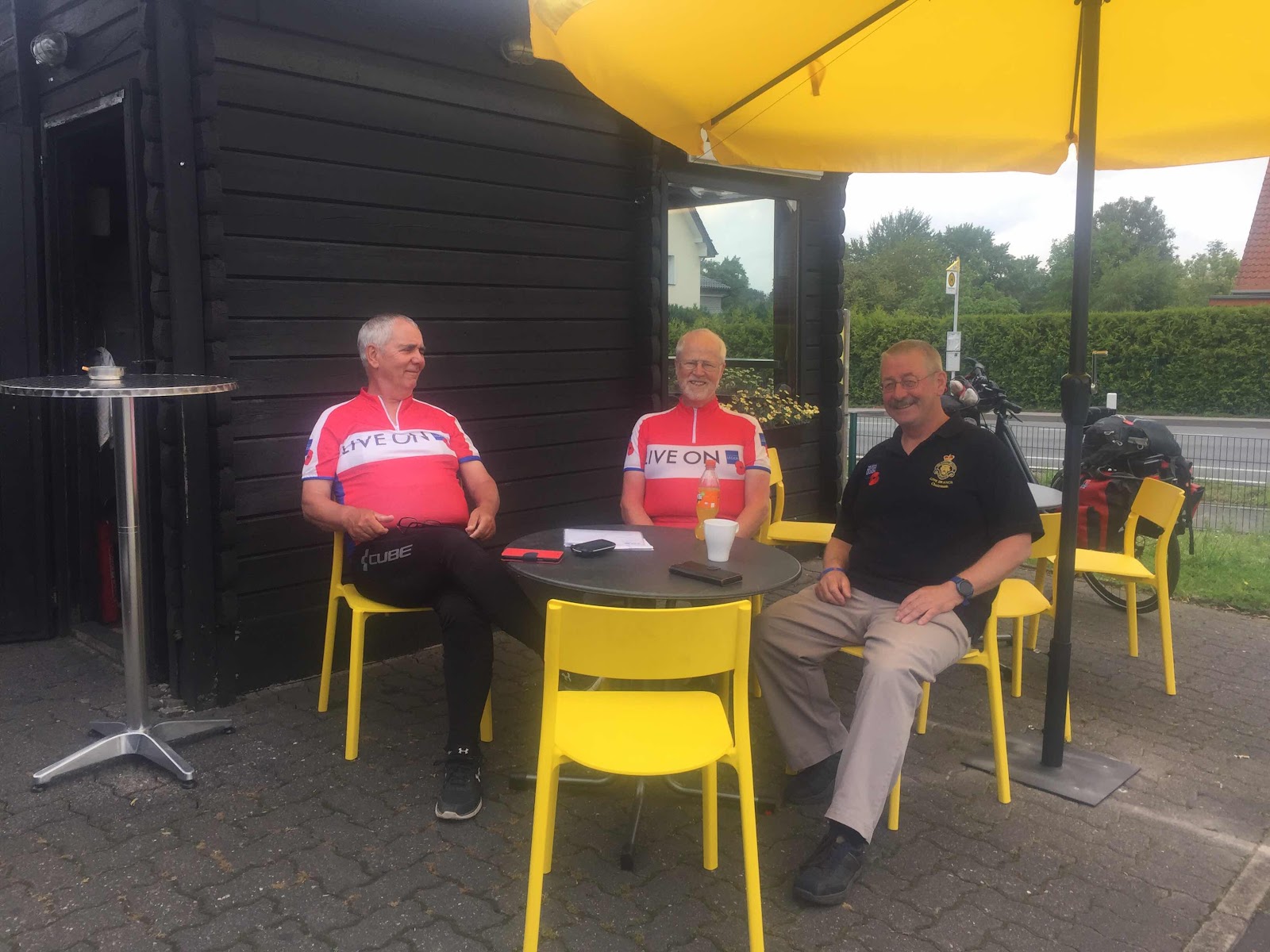 We met the Chairman, Jake at Rita’s Grill! Rita being a long time member of the RBL. Later Allan another member of the Lippe Branch joined us. Rita made sure we all had refreshments, but as our two humans had just had breakfast only drinks were required. Photos were taken and stories exchanged, before it was time for us to continue our journey!
The sky was darkening and threatened to rain, but we were fortunate once again for these dark clouds passed. 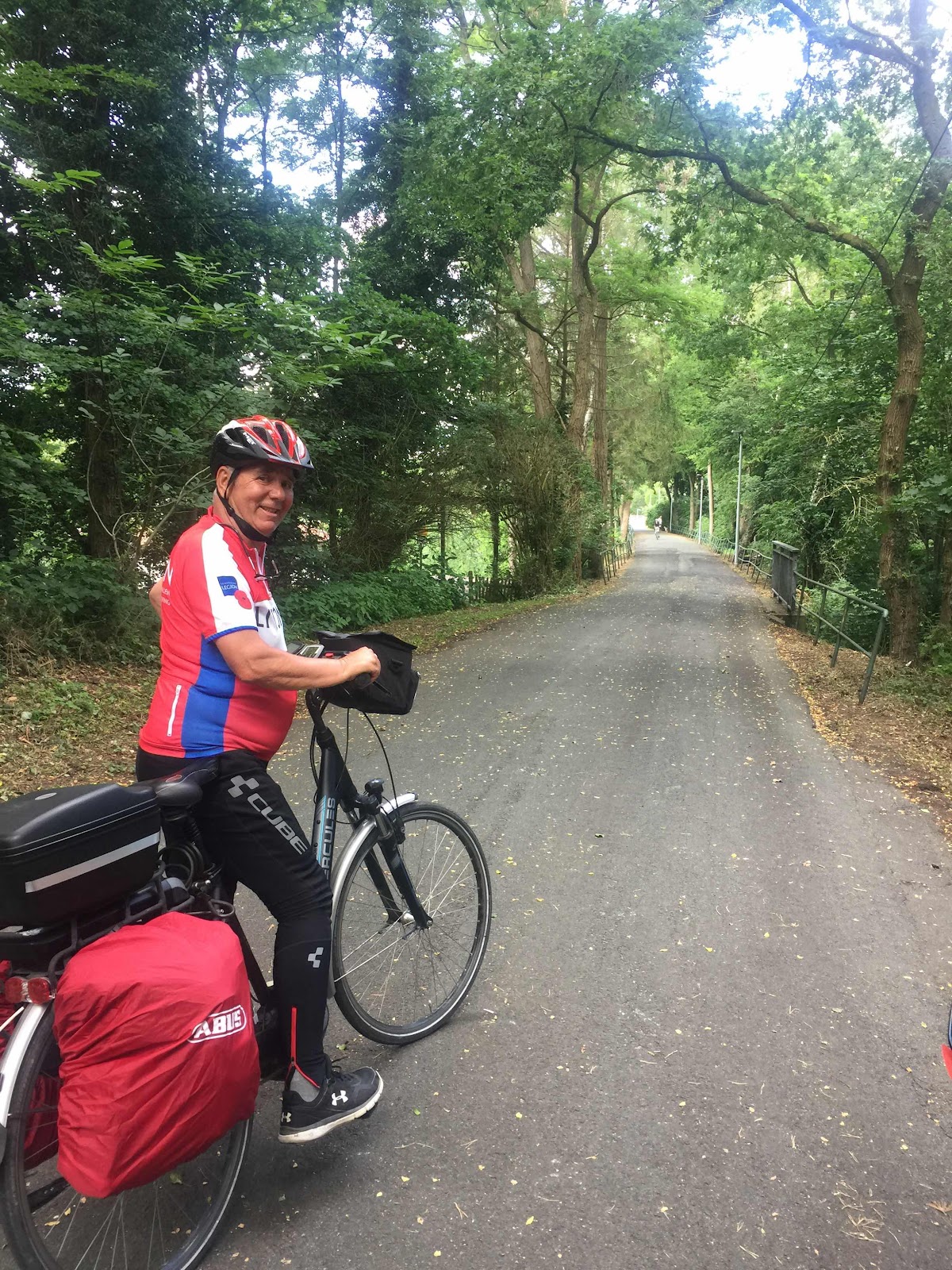 The route now was along really good cycle paths, like a cycle motorway! 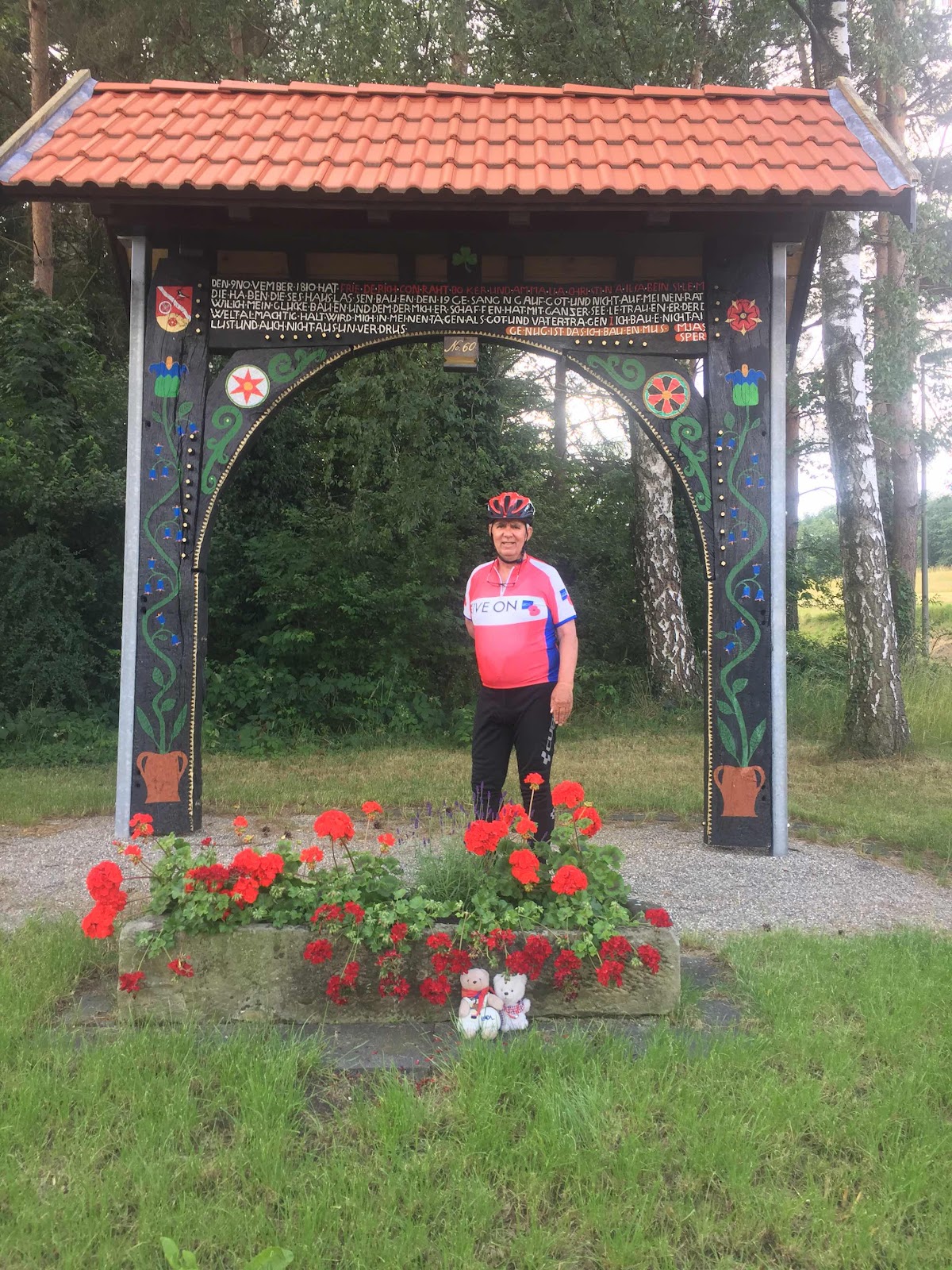 Consequently we made good progress and the humans were able to stop and take photos! 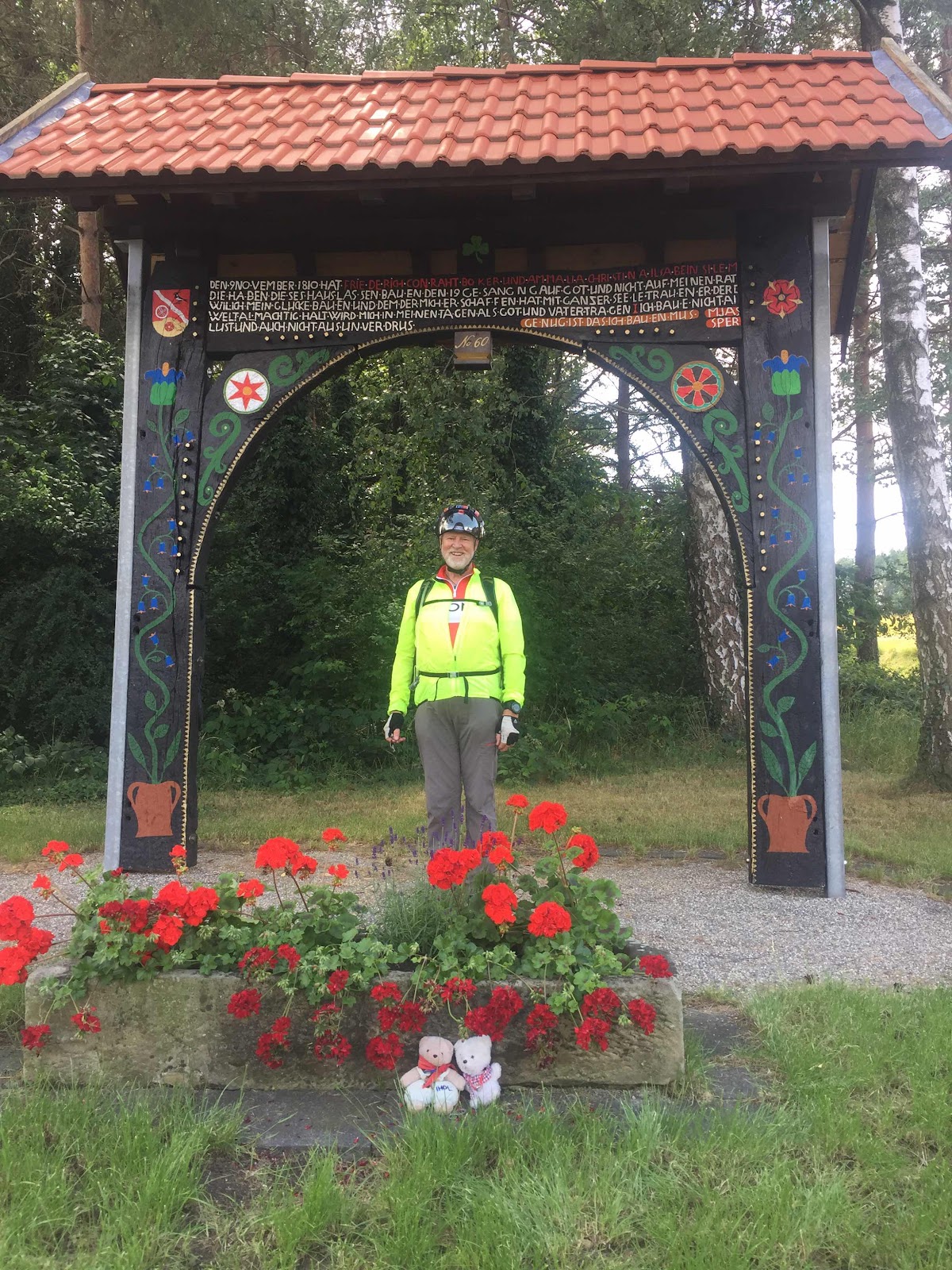 Although it was sunny and warm, our BBF wore his light fluorescent top as his arms are sunburnt, despite sun lotion! 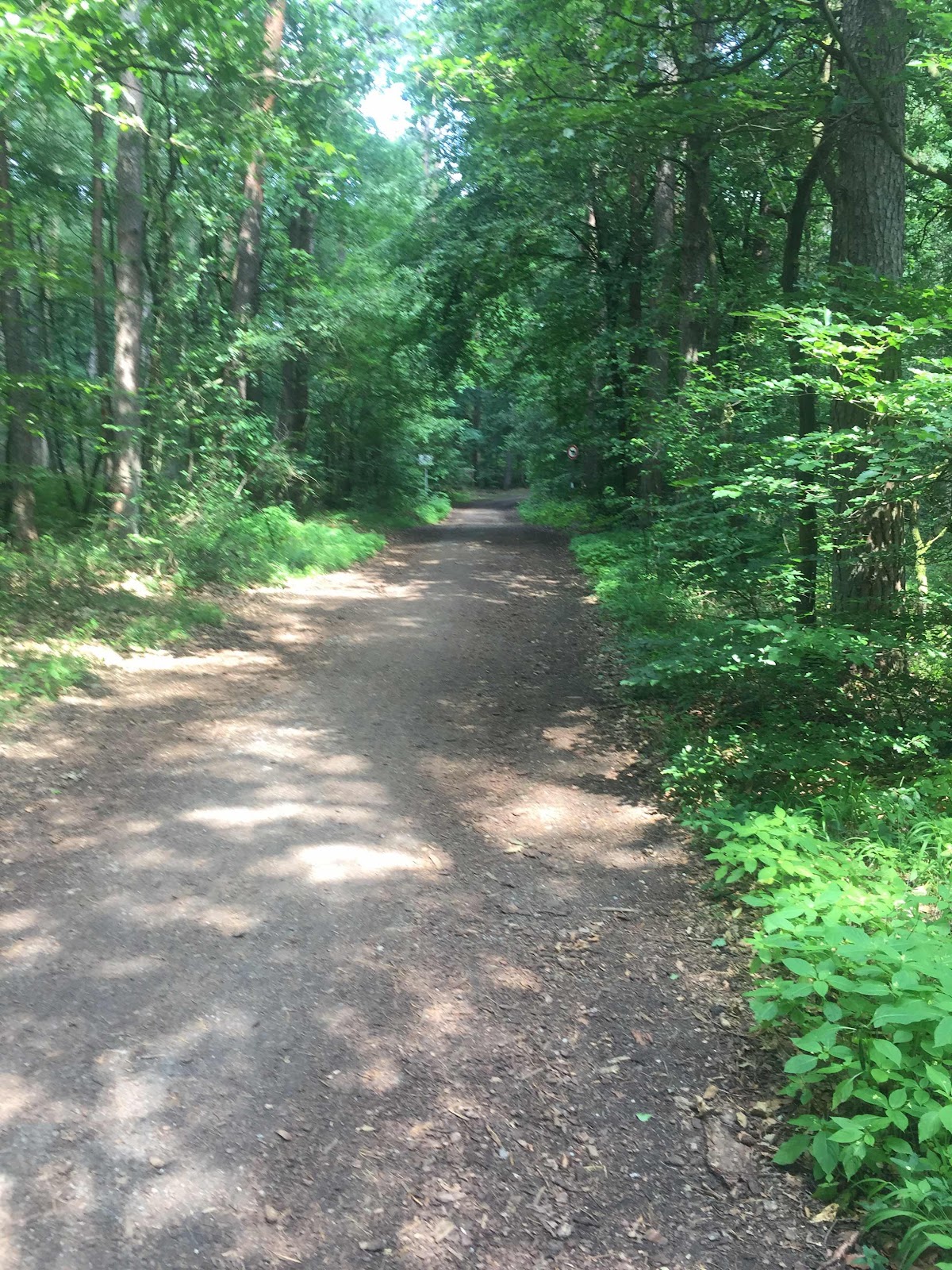 At the top of another hill we now entered a forest and nature reserve. It was lovely riding through the forest which we seemed to have to ourselves.
At one short stage the route took us on a sandy track and down a steepish hill. This had to be taken carefully, but even so Chris was not best pleased with Alan’s route. 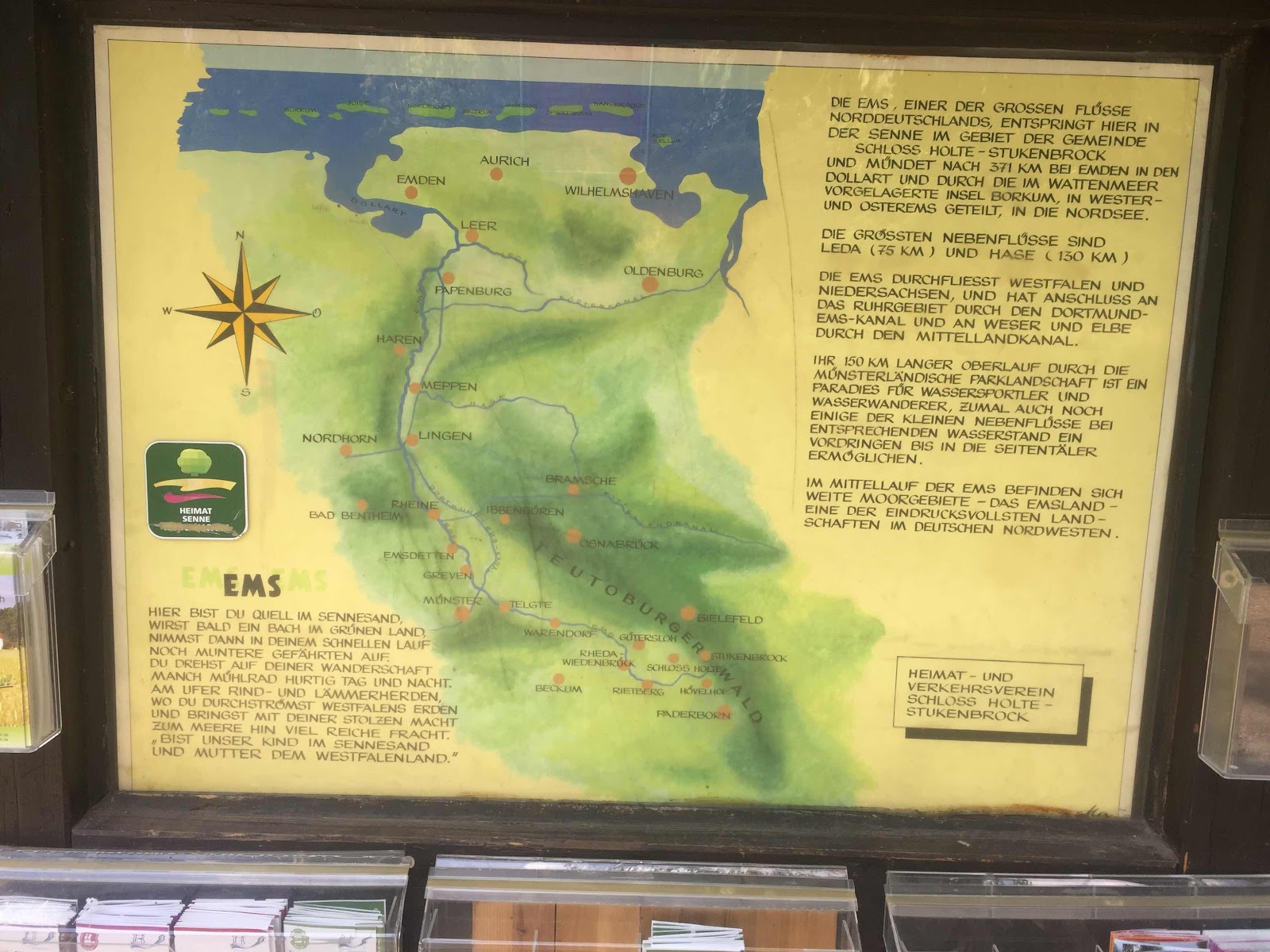 As we passed signs indicating that the source of the river Ems was not far the humans decided on a short detour to take it in, as we had plenty of time. 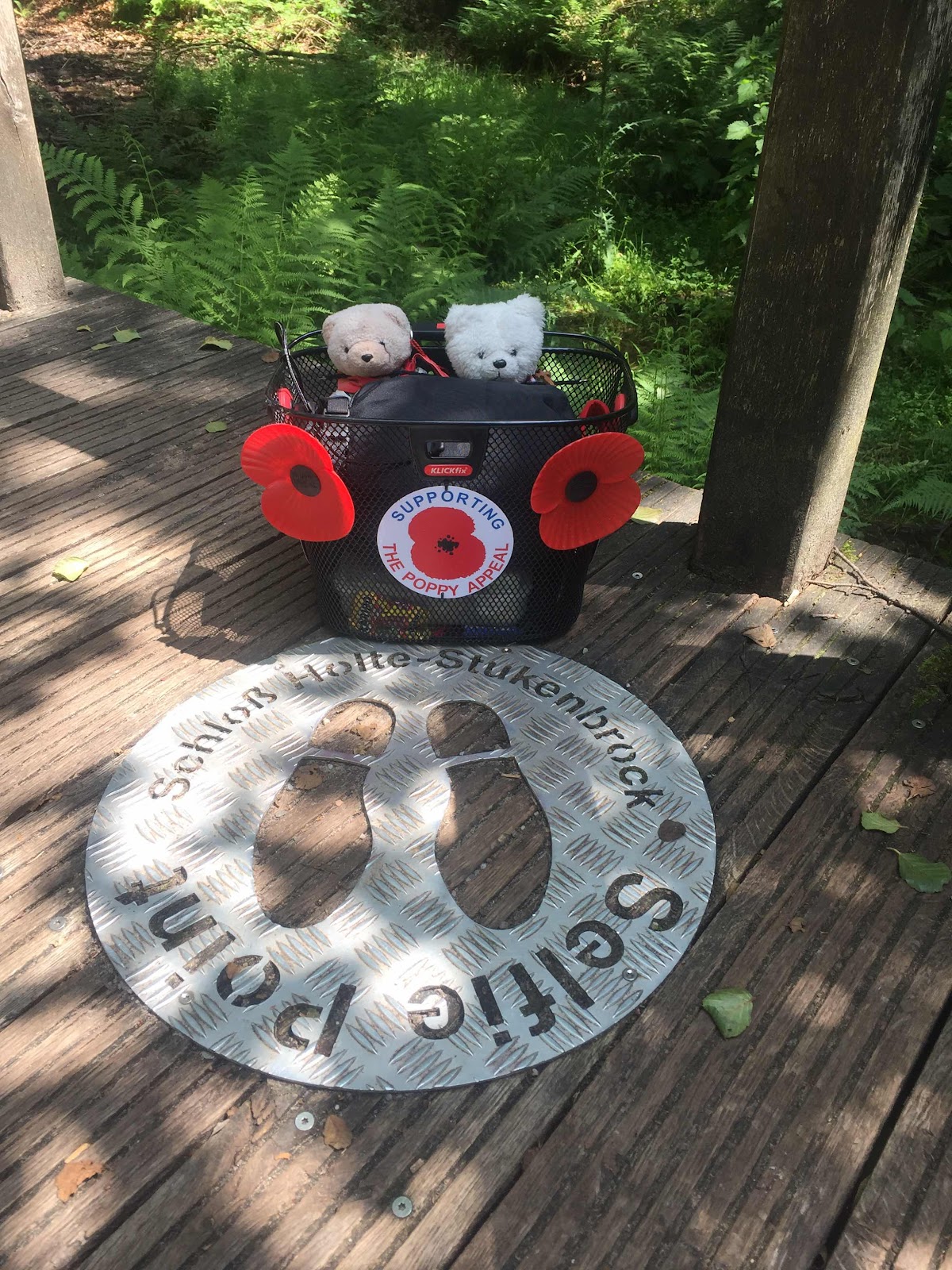 We were not left out either! 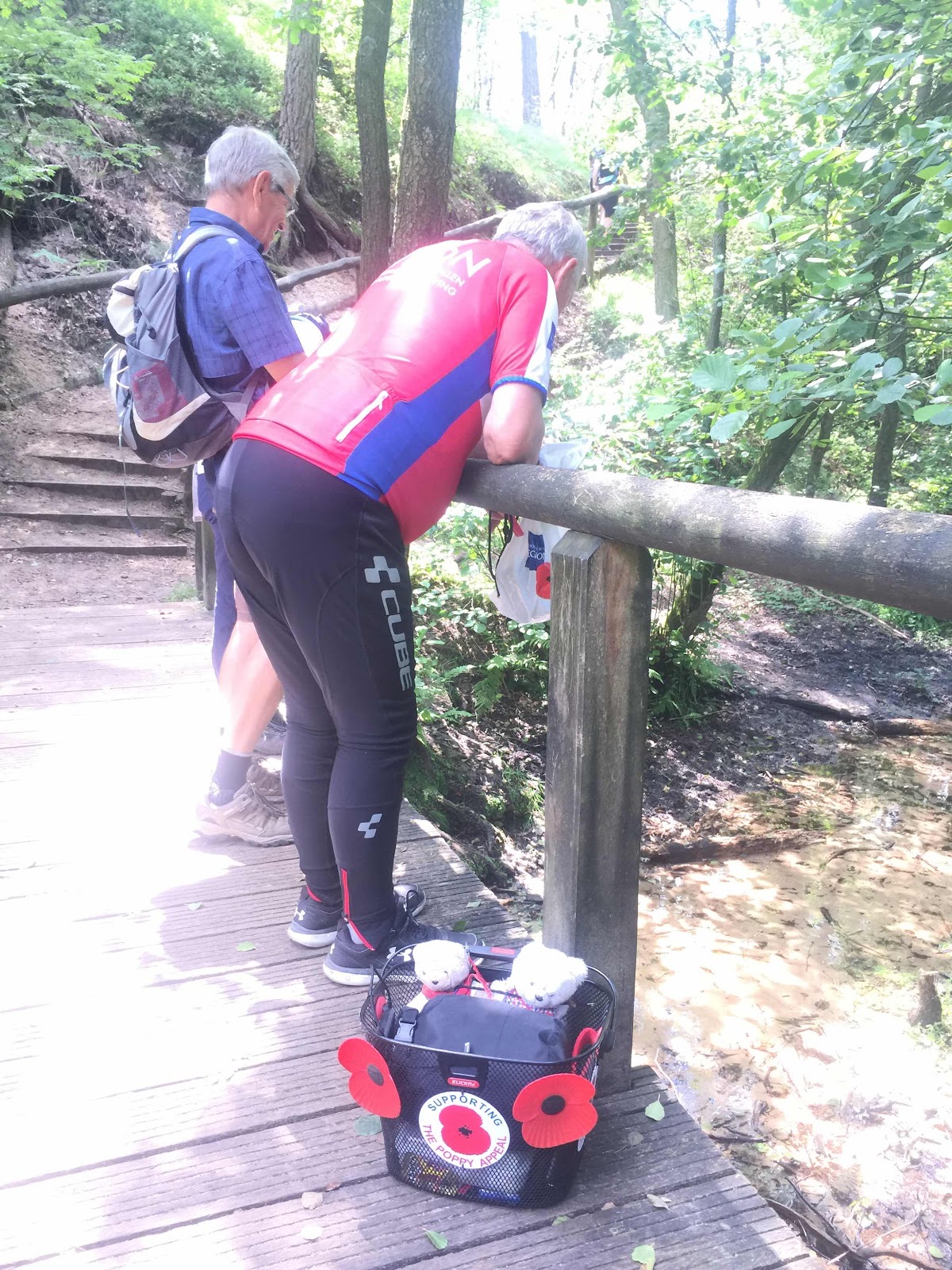 The source is just a muddy bit of water seeping out of the ground! 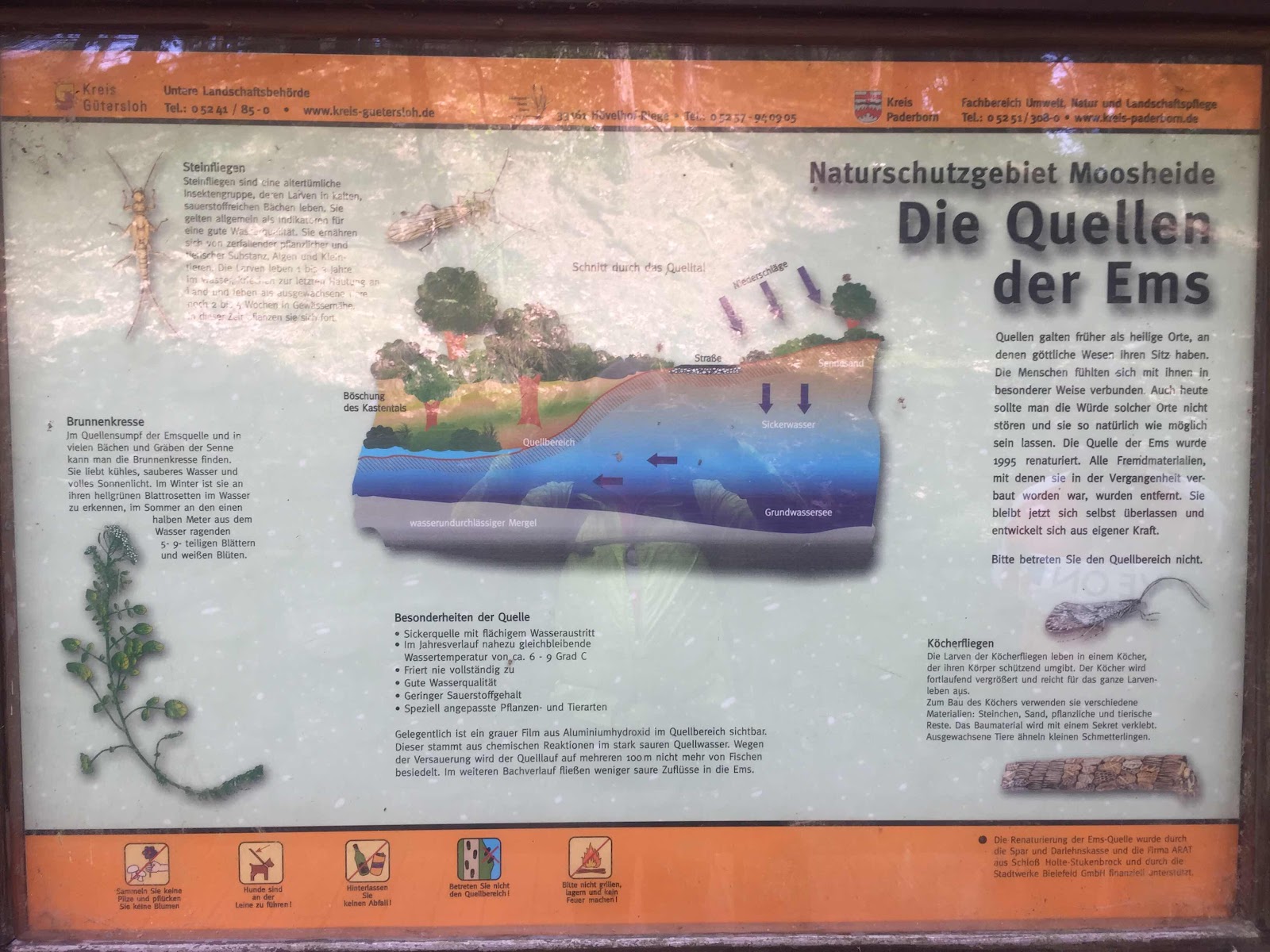 It was not far now and Chris phoned the chairman and said we would be there in half an hour! Alan was surprised as it would only take about 15 mins to get there! 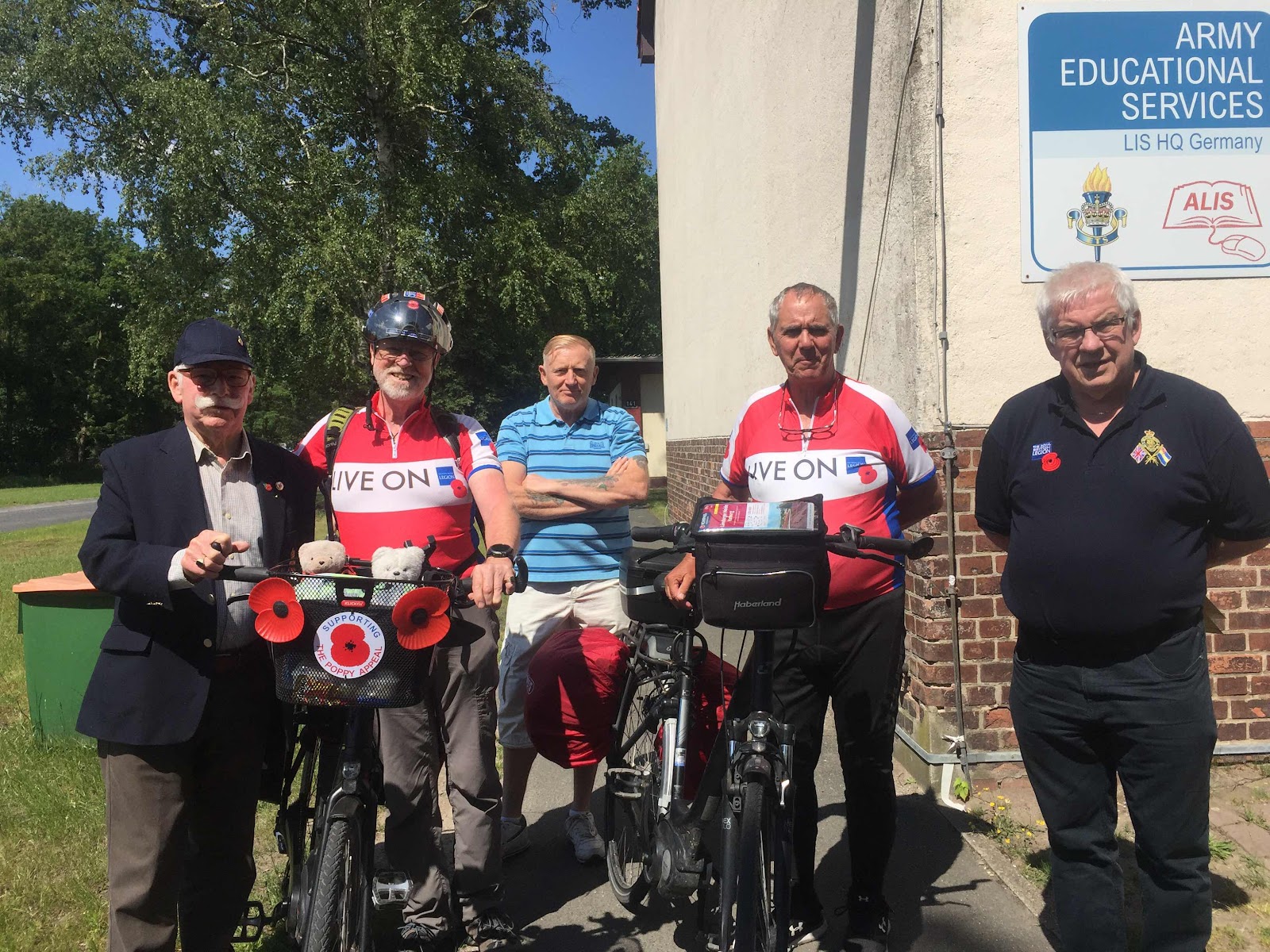 The welcome party consisted of Dusty, the RBL District Secretary, Jim the Poppy Appeal Organiser, Keith the Vice Chairman of the local Paderborn Branch and Akylah Rodriguez a BFBS reporter!
As our BBF entered the main gate he was assailed with memories of all the time he had been in Sennelager; to take the Staff Promotion Exam, to train in “Tin City”, for his fourth OP BANNER NIRELAND tour and to take part with 1 QUEENS in the 1977 Queen’s Jubilee Parade. Here he popped the cork of a champagne bottle as the Queen stepped on to the saluting Dias, out of the cupola of his 432! How many can say that they have drunk champagne on a Parade?
The group retired to the NAAFI where Akylah conducted an interview with our two old codger cyclists, which will go out on BFBS Radio on the Monday morning breakfast show sometime between 06:30-10:00 hrs!
Dusty took our humans to their accommodation where showers and enforced rest were in order until he returned at 19:00 hrs to take them to a nice Chinese restaurant for an excellent evening meal! John a member of the local RBL Branch joined in the celebration! For it was a celebration as Dusty had learnt that he had passed his MSc degree with flying colours!
Steel helmets, sand bags and lamp swinging were the order of the evening!
Tomorrow Dusty will be joining our two for breakfast before we set off for Gütersloh!
Posted by Alan Tyson-Carter at 18:02