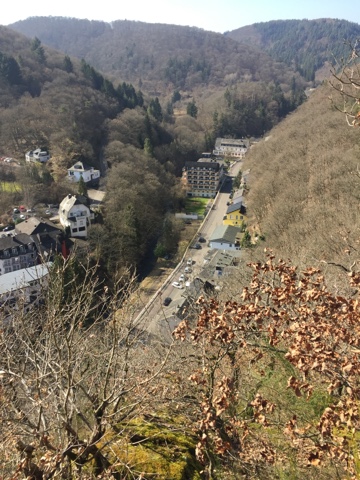 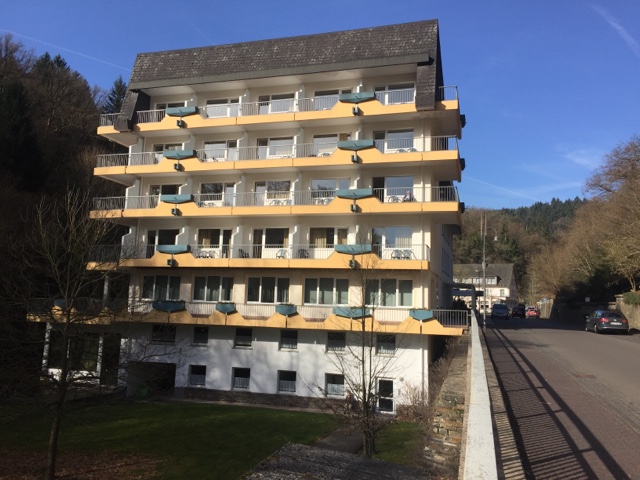 We have now been in the Median Clinic Haus Fortuna in Bad Bertrich for some eight days now. The routine has become part of our DNA! That is to say we get up around 06:45 hrs to either go promptly to Breakfast or to some therapeutic activity! Lunch is at 11:45 hrs and the evening meal at 17:30 hrs! Generally our program is quite full in the mornings, but in the afternoon we are  free.
Alan still feels out of place here and has begun to wonder if he made the right decision! Nothing is ever certain, but he is making progress, so lives in hope.
The staff here are all very competent and, what is important, friendly and helpful! They are fully able to cope with the various demands of the inmates.
The majority of the inmates are female and all are either hip or knee patients! Some are quite elderly and exhibit signs of Alzheimer's while one dear soul is mentally challenged, has a body of a 39 year old but the mind of a toddler!
The majority are also over weight and probably have other medical conditions to cope with such as diabetes and high blood pressure. 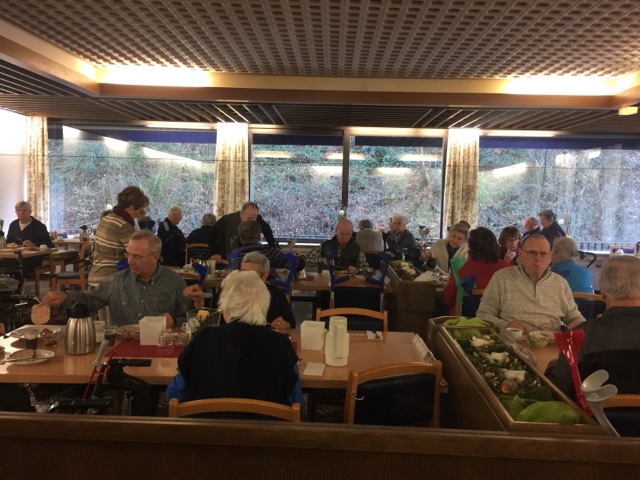 Alan was allocated a seat at a table for four, in the dining room, on arrival. At first it was an all male table but now they are three males and one female! Edgar is a man who arrived at the same time as Alan, sits next to him, is slightly hard of hearing and speaks with a strong dialect which Alan has trouble understanding! Fortunately he is not very talkative so, meals are often taken in silence.
It seems that as you humans get older and less fit the brain atrophies as well, for other than passing the time of day, or talking about one's ailments the conversation is severely limited in scope! Consequently Alan keeps mum!
We were fortunate in having fine weather for the first week, so when free Alan took us for long walks through the little town to the park. Nearly always on the way back we were treated to an ice cream. 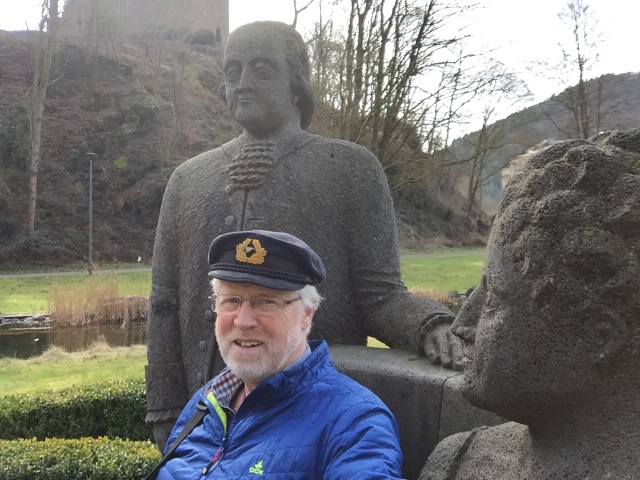 The best conversation Alan had so far was with Prince Wenzeslaus and his sister Konigunde von Sachsen! 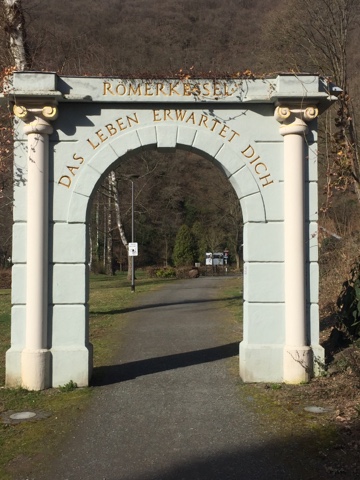 The entrance to the park.
The walk there and back is some 3 kms and after a week Alan felt it was time for more of an adventure so walked round the mountain on the north side of the Valley ! 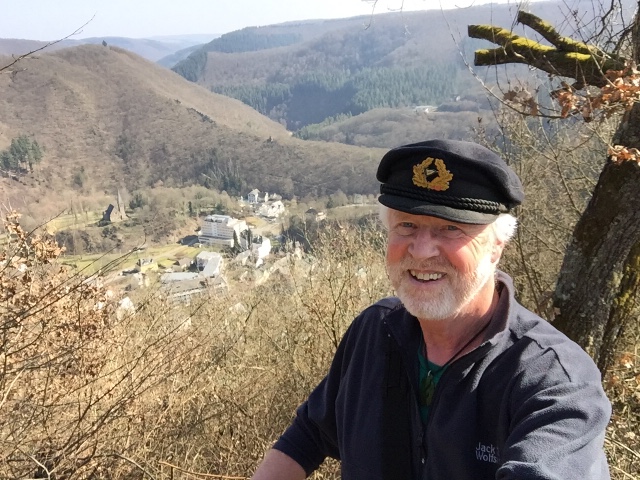 This involved walking up the hill some 247 meters to the top. We took it easy, as clearly the last thing we needed was for Alan to stumble or fall, but we were rewarded with fine views from the top. Going down we were even more careful! 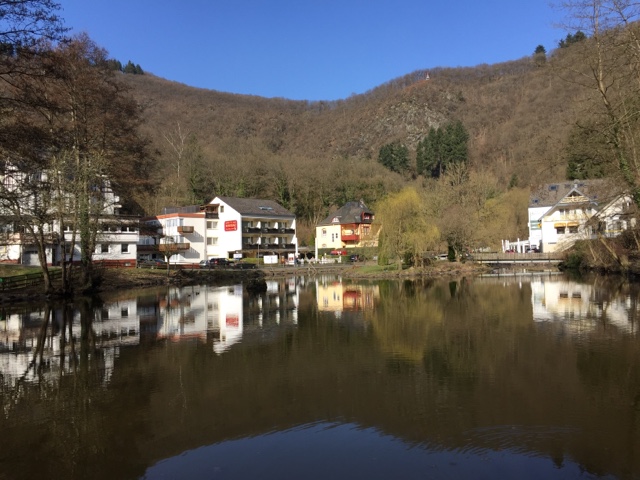 At the bottom looking back up to where we had been is the "Swan Lake" but there were no swans!
Alan had the staples removed during the week, which he said was a great relief! 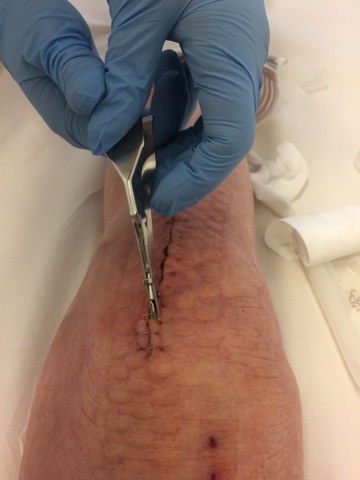 The leg is healing nicely, though the knee is still quite painful! 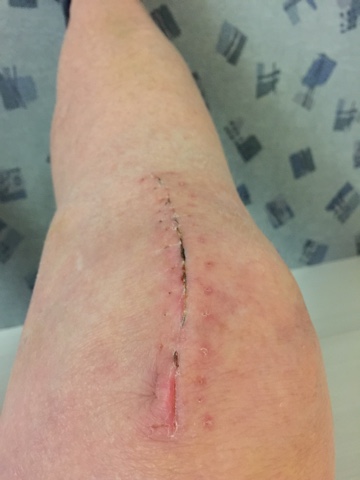 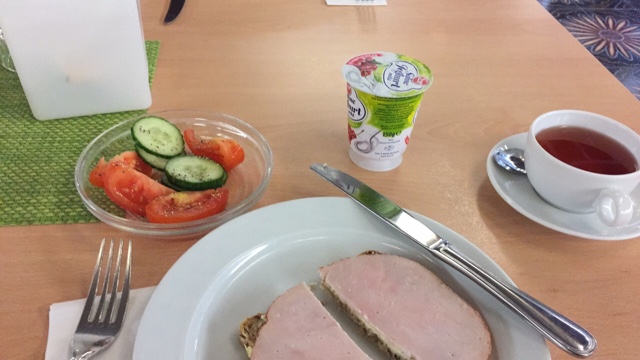 The food is like any hospital OK. Alan finds that breakfast and the evening meal are more or less the same. The only way you can tell the difference is that there is never any coffee to be had in the evening!
The liquid refreshment is little more than coloured water. The coffee is so bland that Alan would be thankful if they were served with American "mud". In the evenings they get peppermint tea or rooibus tea, served so weak that Alan would prefer water! 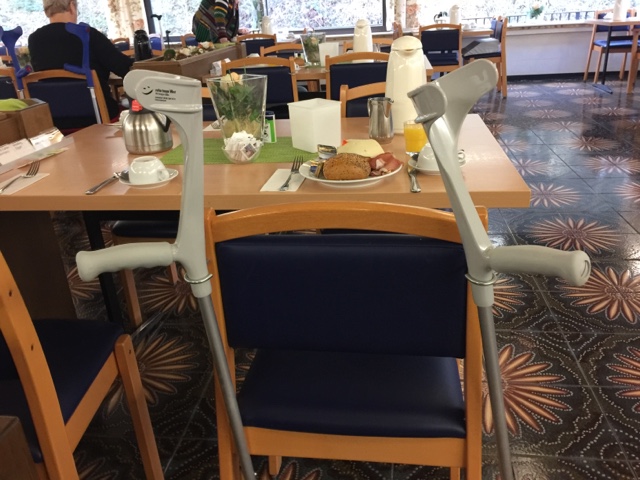 Every chair in the dining room has hooks on the back for the crutches! Some of the inmates use a rollator instead! The advantage of the rollator is that it can be used to carry the food from the buffet!
Patients can be accompanied by a spouse or partner which may make the stay more bearable for the patient, but it must be quite boring for the partner, who just sits and waits while the other half is receiving therapy!
Now the weather has changed and it is wet and windy. Long walks in the woods are now clearly out, but Alan will feel trapped like a caged lion if the weather does not improve soon! Sunday is perhaps the most boring and tedious of days as there is no therapeutic activity but the meal times stay the same! So roll on Monday we say!
Posted by Alan Tyson-Carter at 09:48 No comments:

It was clear to us last October, when we had to abandon our inner German border hike, that Alan would need something drastic done to his right knee if ever we were to walk another Camino.
Alan had some arthroscopy done in November which proved that there was no cartilage on the inside of the right knee, and so a date was fixed to have a partial knee replacement surgery done! On 1 March Alan had this done in the Städtischeskrankenhaus Nettetal by a Doctor Farag, who as luck would have it, is an Egyptian. 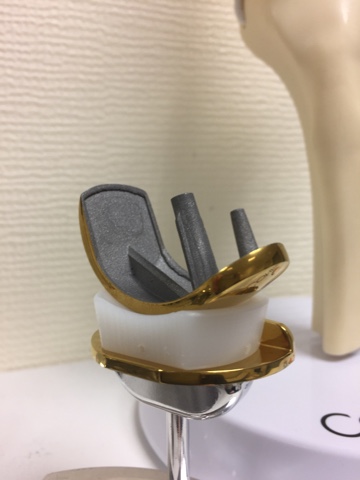 Something similar to what you see here, but without the gold was consequently put in. 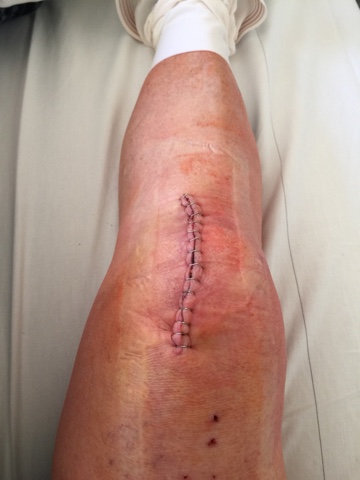 Alan has said that stapling must have been invented by a surgeon with poor needle and thread skills!
It was clear to us Bear's of little brain, that this whole procedure was painful. 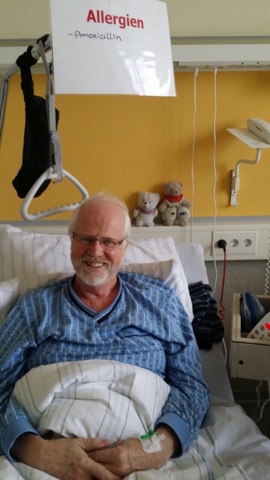 But we were there in the hospital to administer TLC when needed.
To all our delight we were visited by many friends and realatives. Monika T, who kindly delivered us to and later collected us from hospital, was the first visitor followed a day later by George and his wife Petra. This was a wonderful surprise for we all know how much George hates hospitals, and with good reason.
On the Saturday Petra brought Monica and Christopher and of course little Vincent. We all had a wonderful afternoon being chased round the garden by Petra. 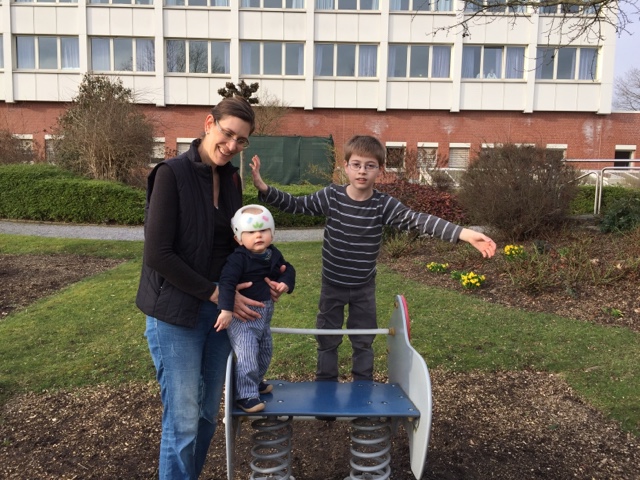 Hardly had this fun group departed when we were surprised by Natalie and Heiner visiting. Heiner had just returned from Mexico and brought us Bears a nice little Sombrero which now adorns the head of Sandra's little bear that lives with us! 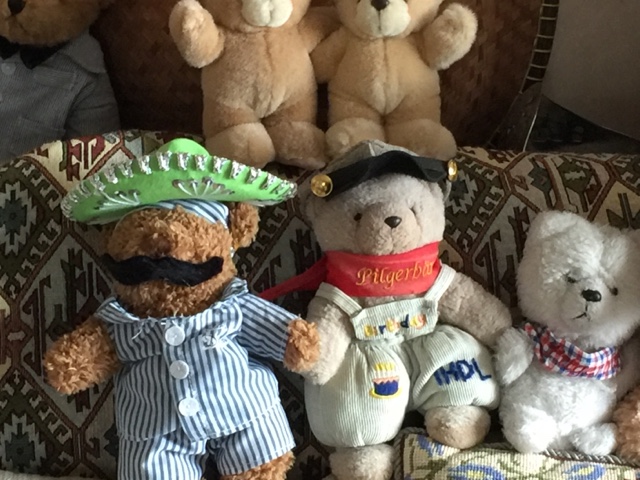 While Natalie brought some of our favourite chocolates!
Alex visited too and he was doubly welcome as he brought Alan a G+T and the Sun newspaper! 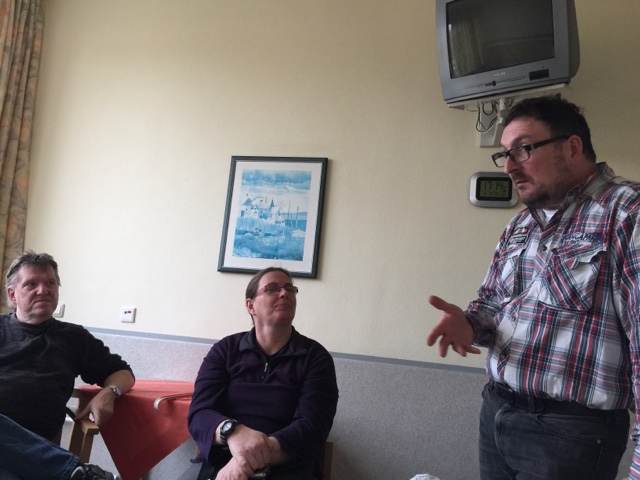 The last couple of visitors were then Alistair and Karin C on the Sunday. In such a manner the time in hospital flew by.
After only six days we were sent home and here too we were inundated with offers of help and visitors.
Alan had the opportunity of going out for a meal with Karin and Alistair C on one evening. 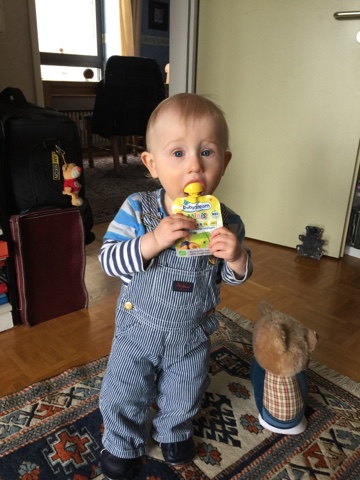 Vincent dragged Petra round to see us and had great fun reorganising everything he could lay his hands on.
Anja and Karoline came round too, just to have a chat. 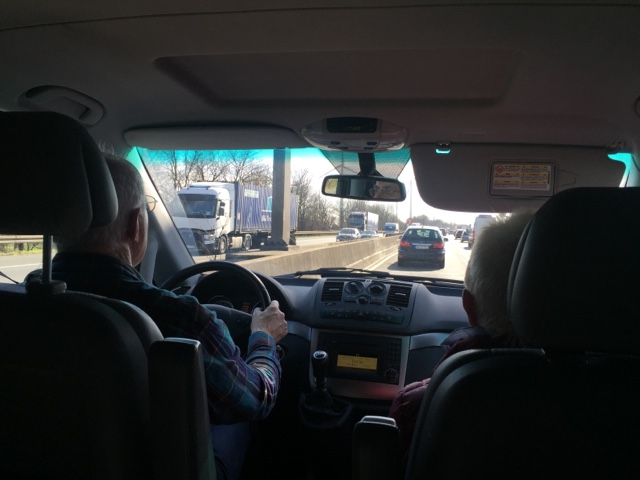 Then on Friday 10 March we were collected by a minibus which already had two female cripples in it. We drove via Düren where we collected a third female and this made a two hour journey a four and a half hour one!
Alan was in some pain when we got here, but had to wait until late in the evening before he could see the duty doctor to get some painkillers! 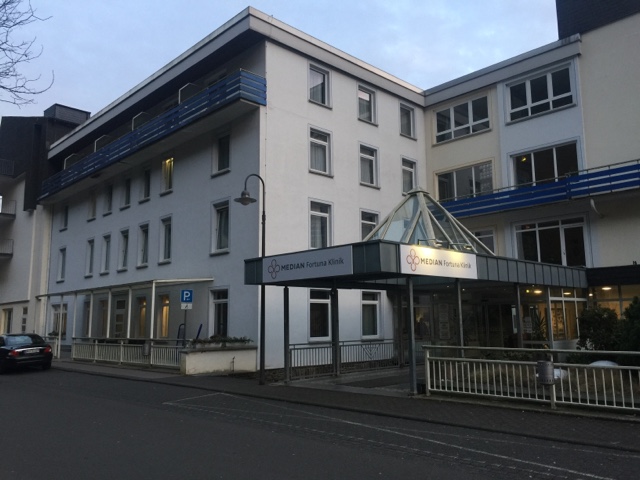 Where the light is on the second floor is where our room is! 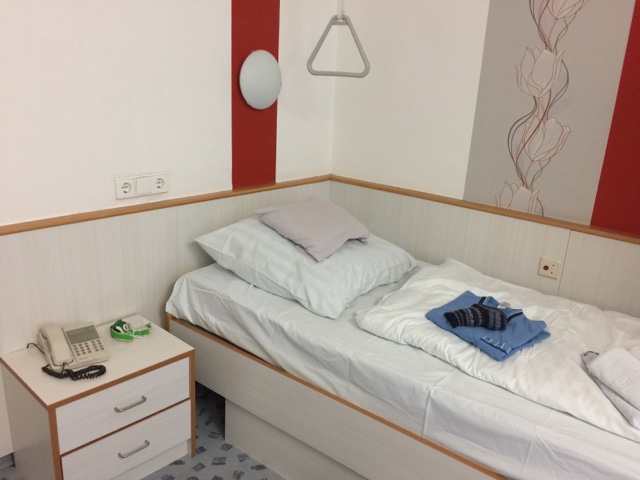 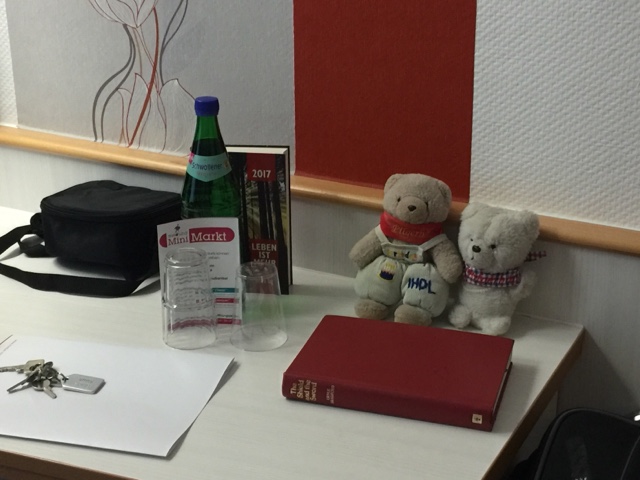 In the dining room Alan was allocated a place at a table with three other men. Two were coming to the end of their time here and are a talkative couple, Alan says more like old women for it's inconsequential rubbish that they say!
It's a considerable culture shock being here too. The majority are clearly OAPs, though there are some younger patients too, but they are all so old in the head! At least one poor soul is mentally challenged and two females and one male are Turkish Muslims! Many seem to have a poor attitude to the requirements to work hard in the Physiotherapy sessions too.
After our first session this morning we went for a walk round town and after lunch we walked along a Camino path to an elves grotto! 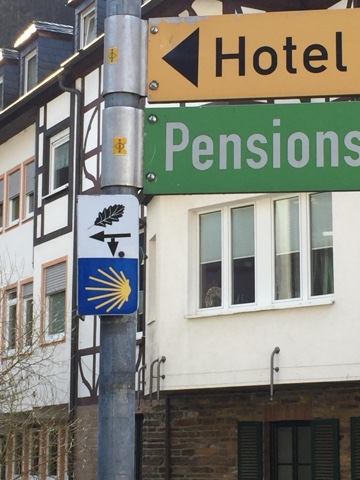 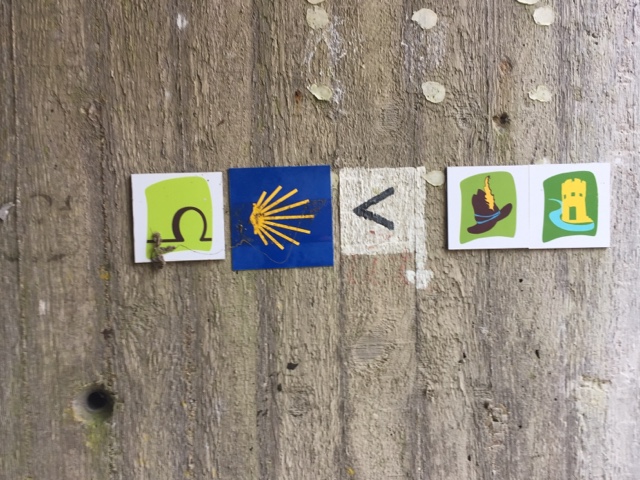 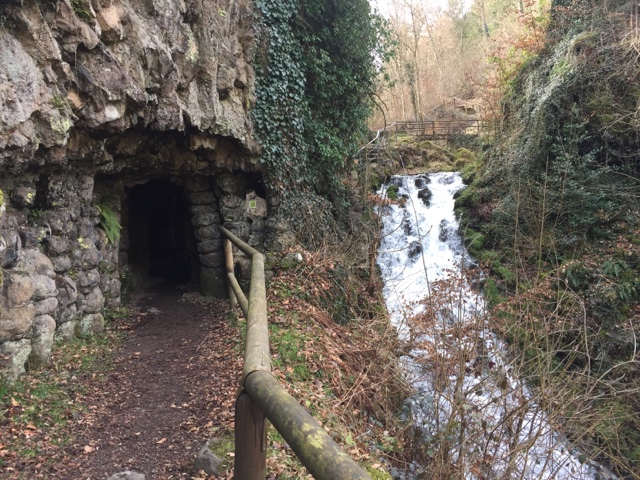 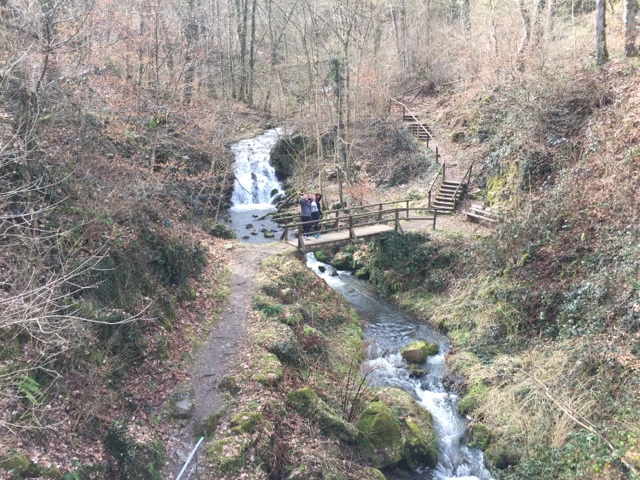 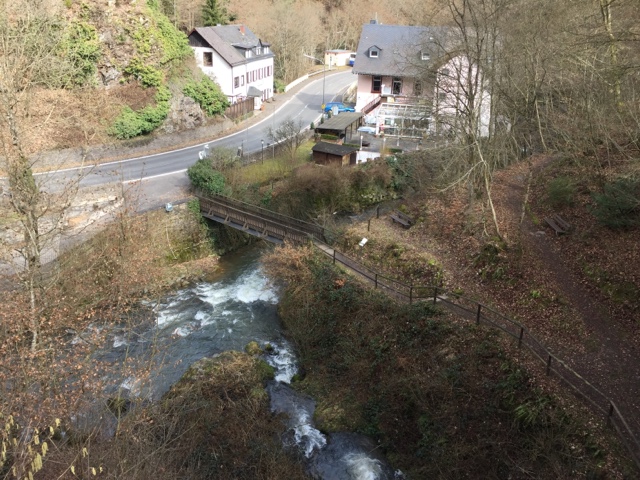 When we returned from these outings we found Alan's plan for the week. 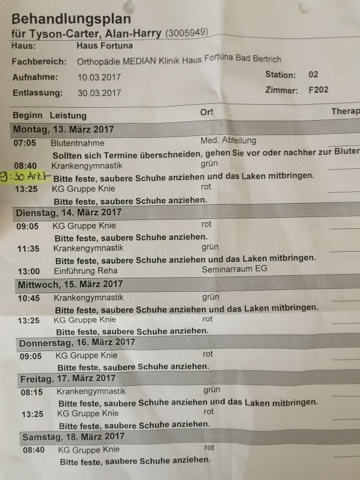 Early starts will mean early to bed but we are told it makes a man healthy wealthy and wise!
Posted by Alan Tyson-Carter at 15:28 No comments: