A hospital visit in time of COVID-19! 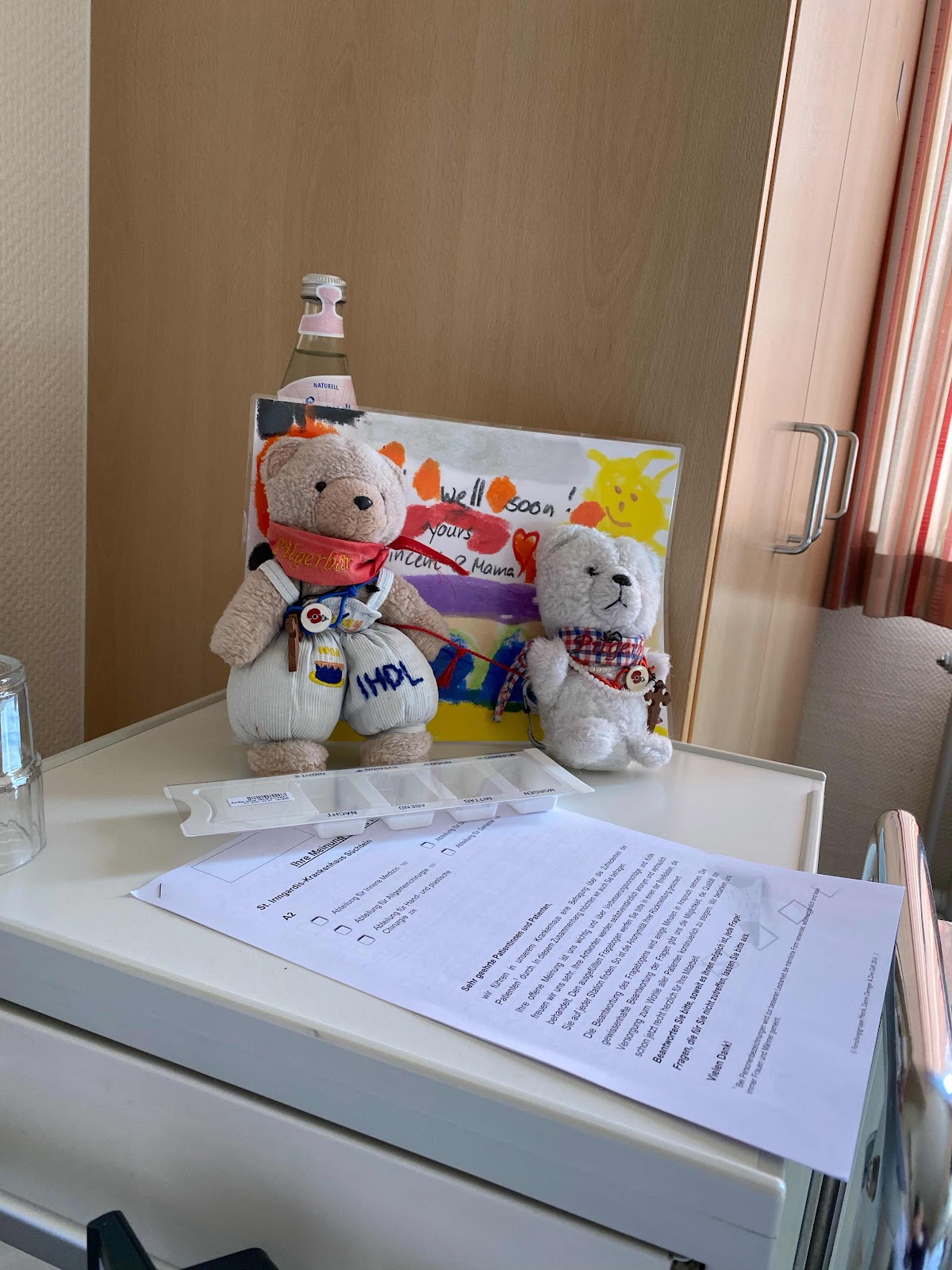 Two weeks ago now our BBF had a show his face visit to our GP and he just mentioned in passing that his gallbladder had been giving him grief! Dr Aretz did an ultrasound scan and said it was time to remove it. Now you have to know that Dr Richard Aretz is also a sailor and has his own boat, so we get on well. He now rang a friend who just happened to be the Chief Surgeon in a hospital who was also a sailor! After a little discussion Dr Maciey agreed to see Alan that day! So off we went to the St Irmgadis Hospital in Süchteln, some 30 mins away by car. 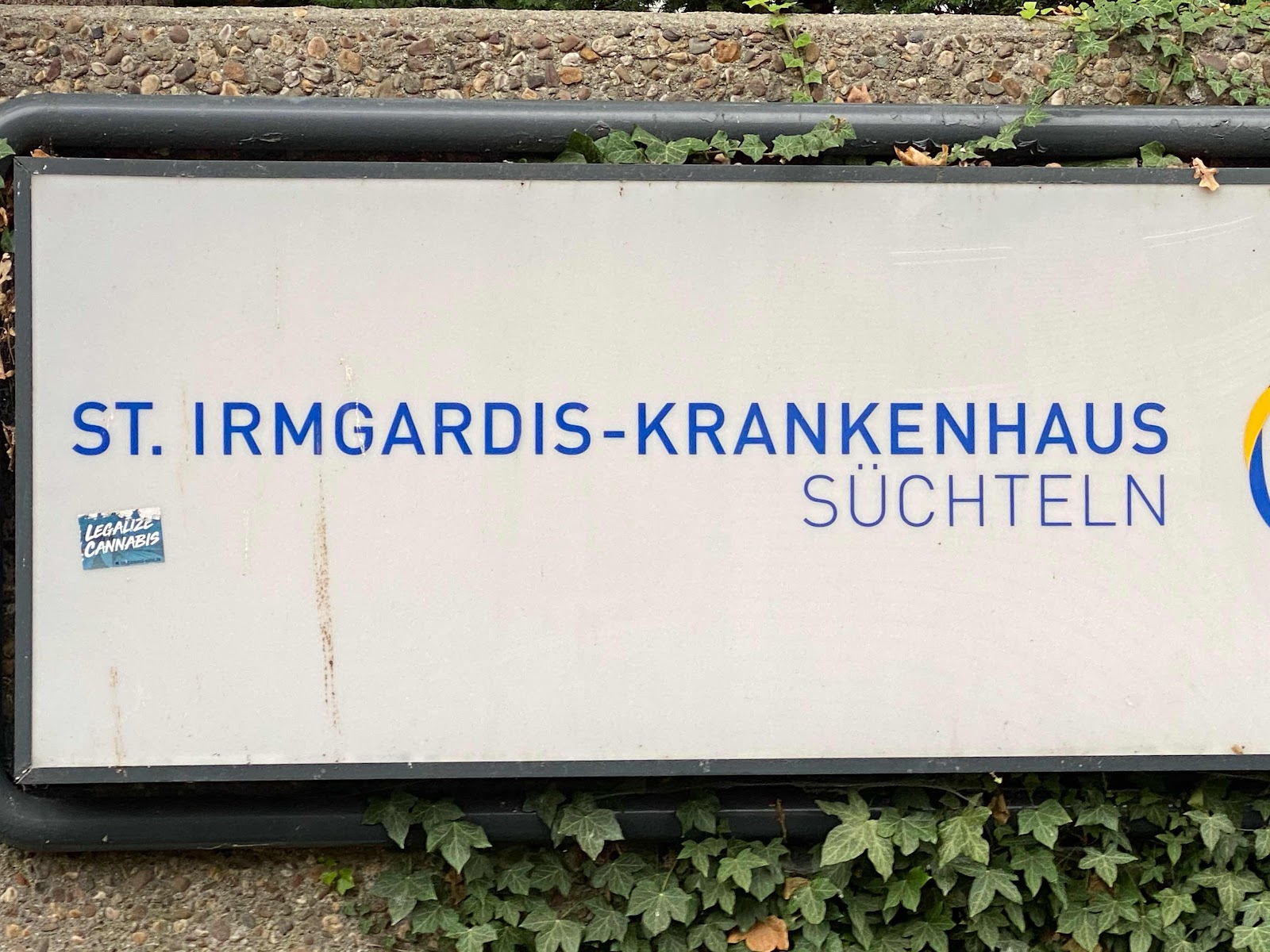 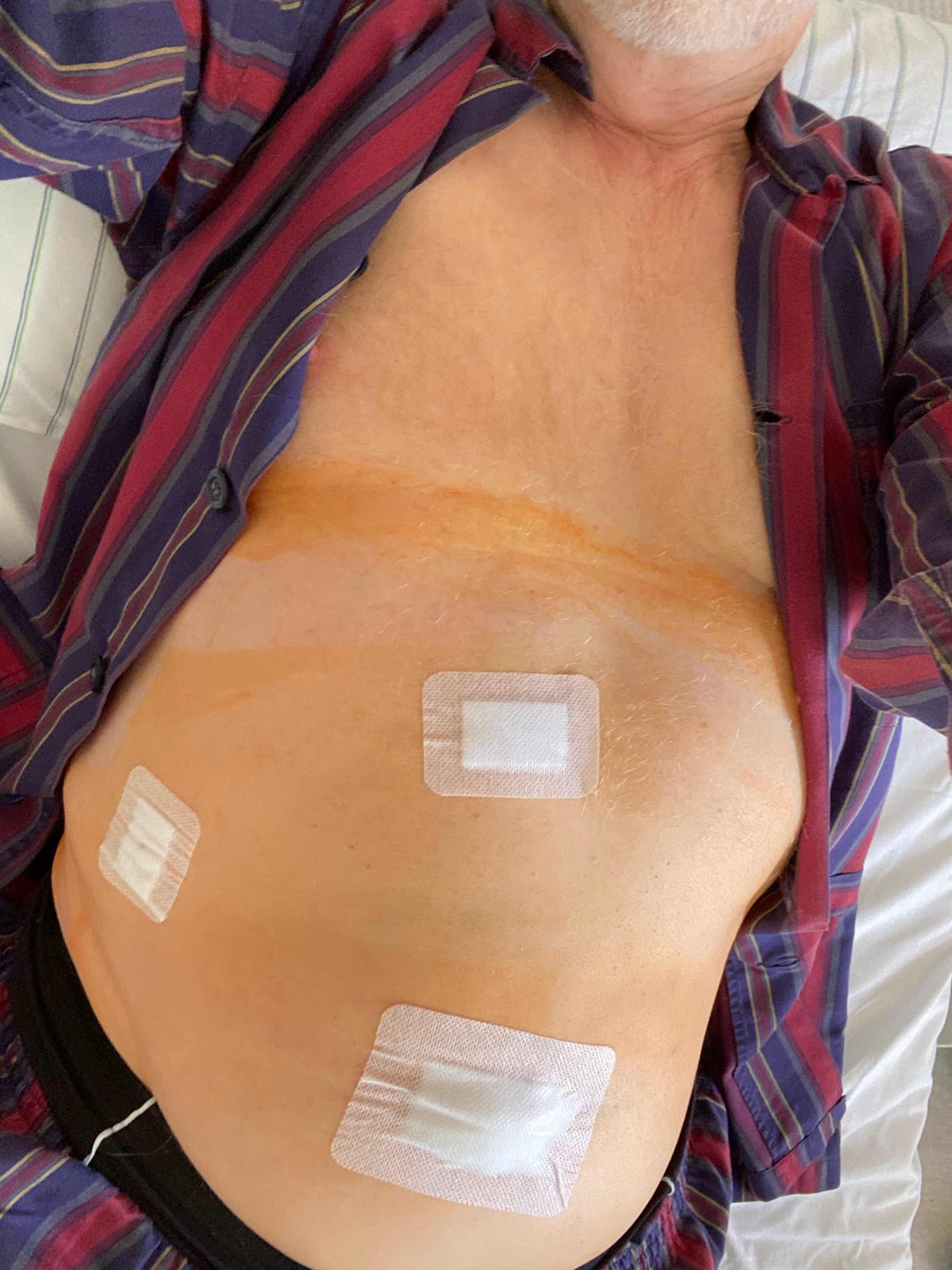 Alan was later collected and taken back to his Ward. On the way the Nurse Thorsten said that if he wanted they could put him in a room with an en-suite bathroom as the old room only had a wash basin! Needless to say Alan thanked him and said yes please. He then had to explain to Thorsten where the key to the safe was kept. Alan had given it to Jamie to look after and it was wrapped into his Pilgrim neckachief! 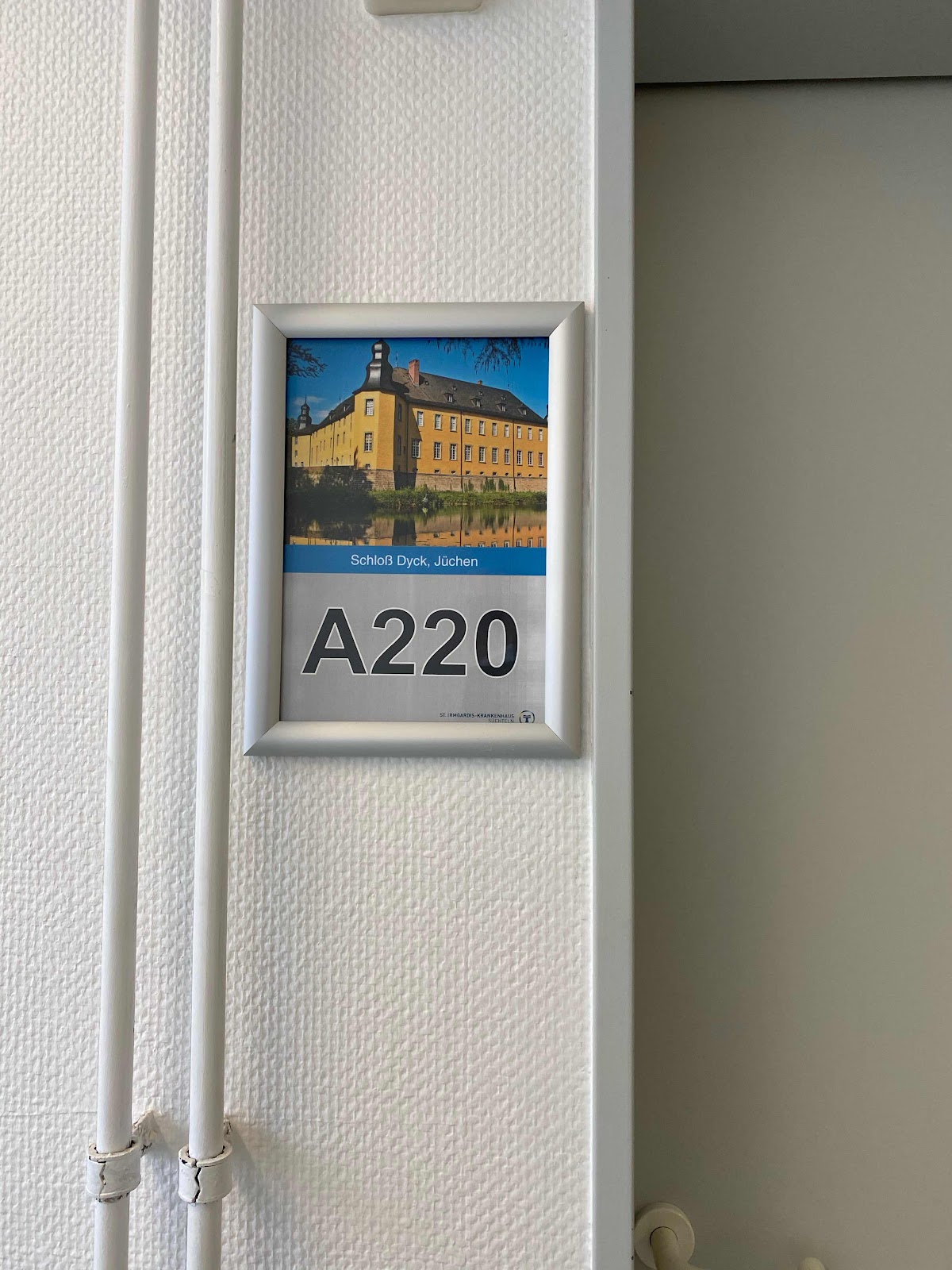 Once the move had been completed and Thorsten had helped Alan put on his pyjamas our BBF dozed the afternoon away as the effects of the anaesthetic gradually diminished. Someone said at some stage that there would be nothing to eat today but that the next day would be soup only. Then a Dr must have taken pity on him as Thorsten came with a cup of peppermint tea, (something Alan always associates with being old or ill in Germany) and one slice of white bread, butter and cheese. 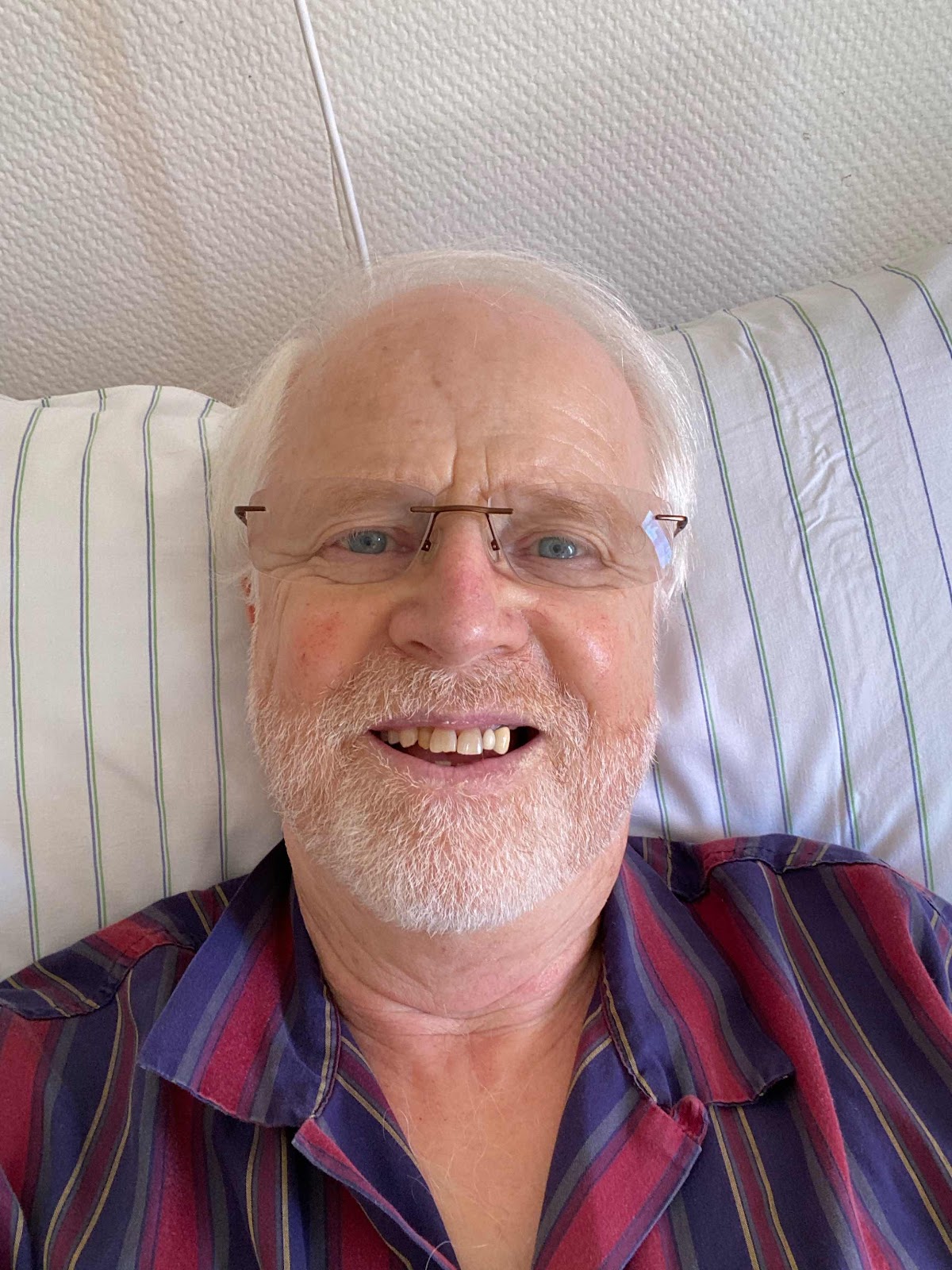 Much to our pleasure we held a Whatsapp video call with our Worms Family, and then we slept some more! Shortly after our video call Thorsten came and hooked Alan up to a drip. This was a pain killer he was told. As it was only a small drip it was removed later in the evening! 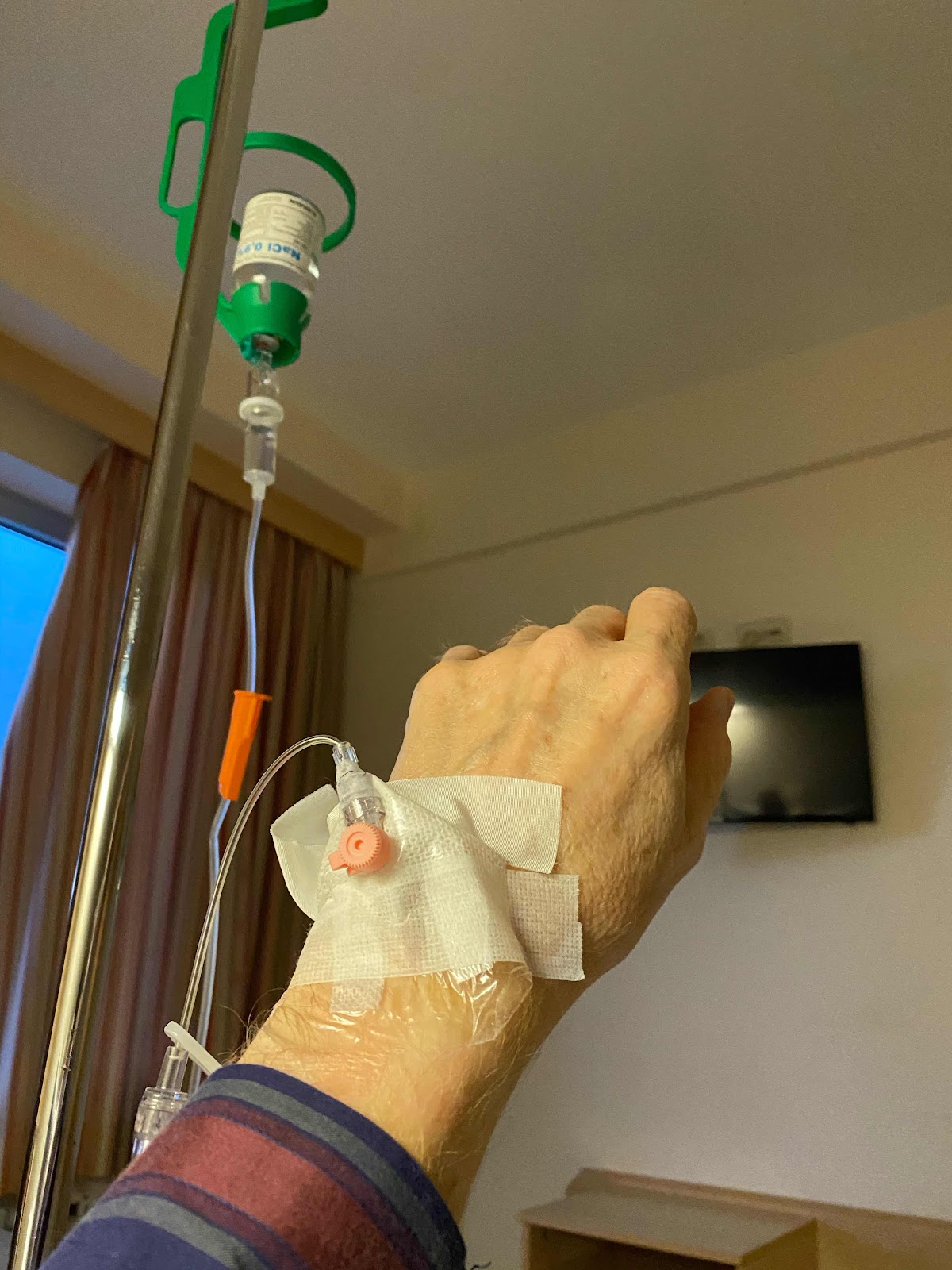 We watched TV now until about 22:00hrs when we turned the lights out and went to sleep!
Our second day in hospital was uneventful! The morning circus of nurses and doctors coming in and taking, blood, temperature etc started at around 07:30hrs followed by a light breakfast! 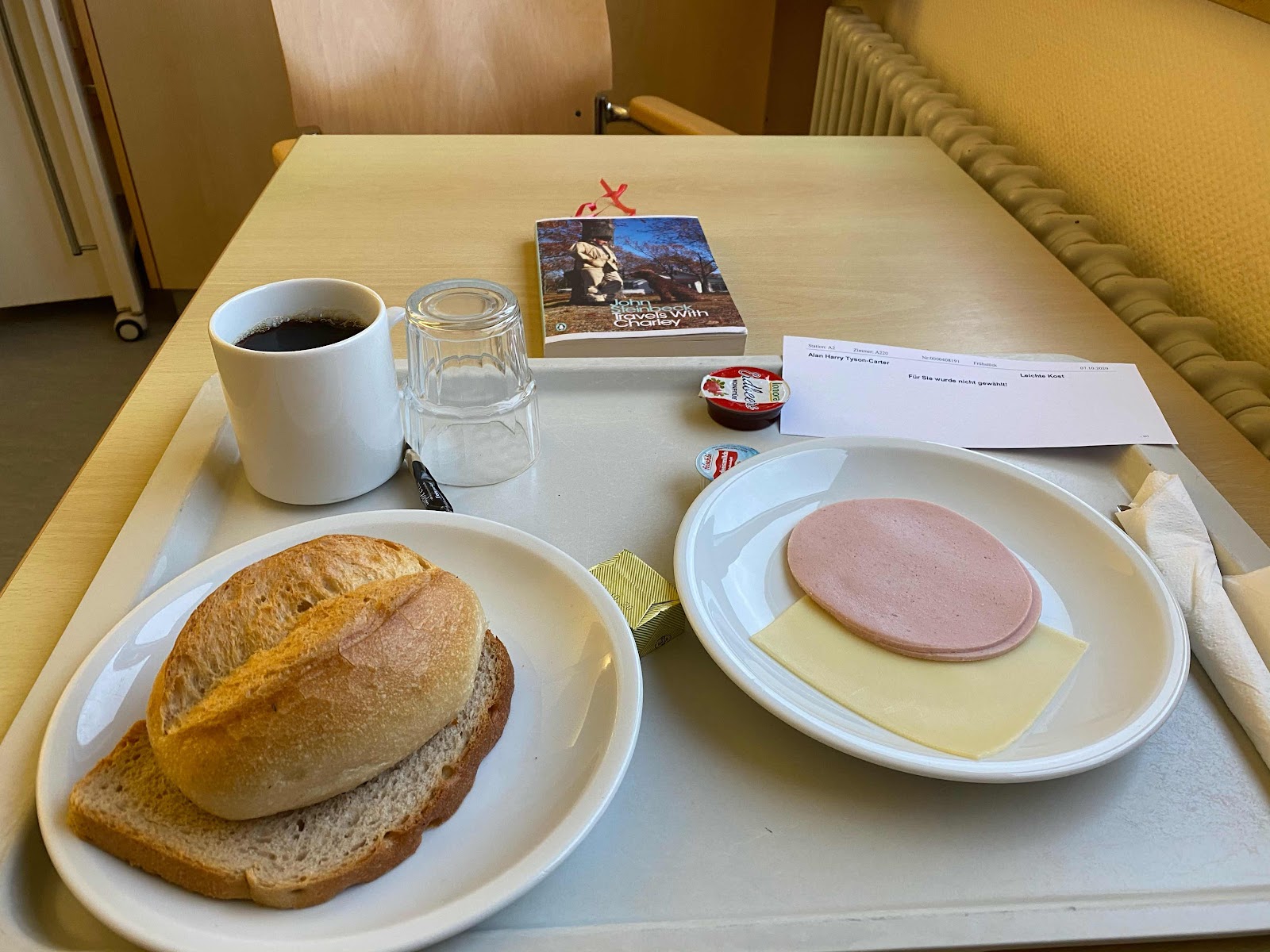 Alan had a bit of a strip down flannel wash and then sat and read, while we Bears attempted to write it all down. Petra and Vincent had a short video call to make sure all was well, which was doubly nice. Alan used SMS to chat to the other half of his patchwork family during the day. Christopher has cocked up his iPhone by changing the password which he did not write down, or tell his mum what it was, and after three attempts can’t get in anymore! So no more whatsapp chats with him! Moni has not yet taken her iPhone into use and still uses a steam driven mobile! Hence SMS is the method of maintaining contact!
Our human when he got bored with reading, paced up and down the room like a caged lion. He told us it was an attempt at keeping a modicum of fitness. He did this a few times during the day. He complained though that his stomach muscles ached and moving around in bed was not so easy anymore and he felt like he was now an ancient geriatric! We kept quite and didn’t remind him that he is already a 74 year old geriatric, as he might have thrown us teddies in the corner and sulked!
The staff are kindness and patience itself. They came a  number of times during the day to ensure our human had all he needed. He was allowed lunch, which included soup, but also rice and meatballs! 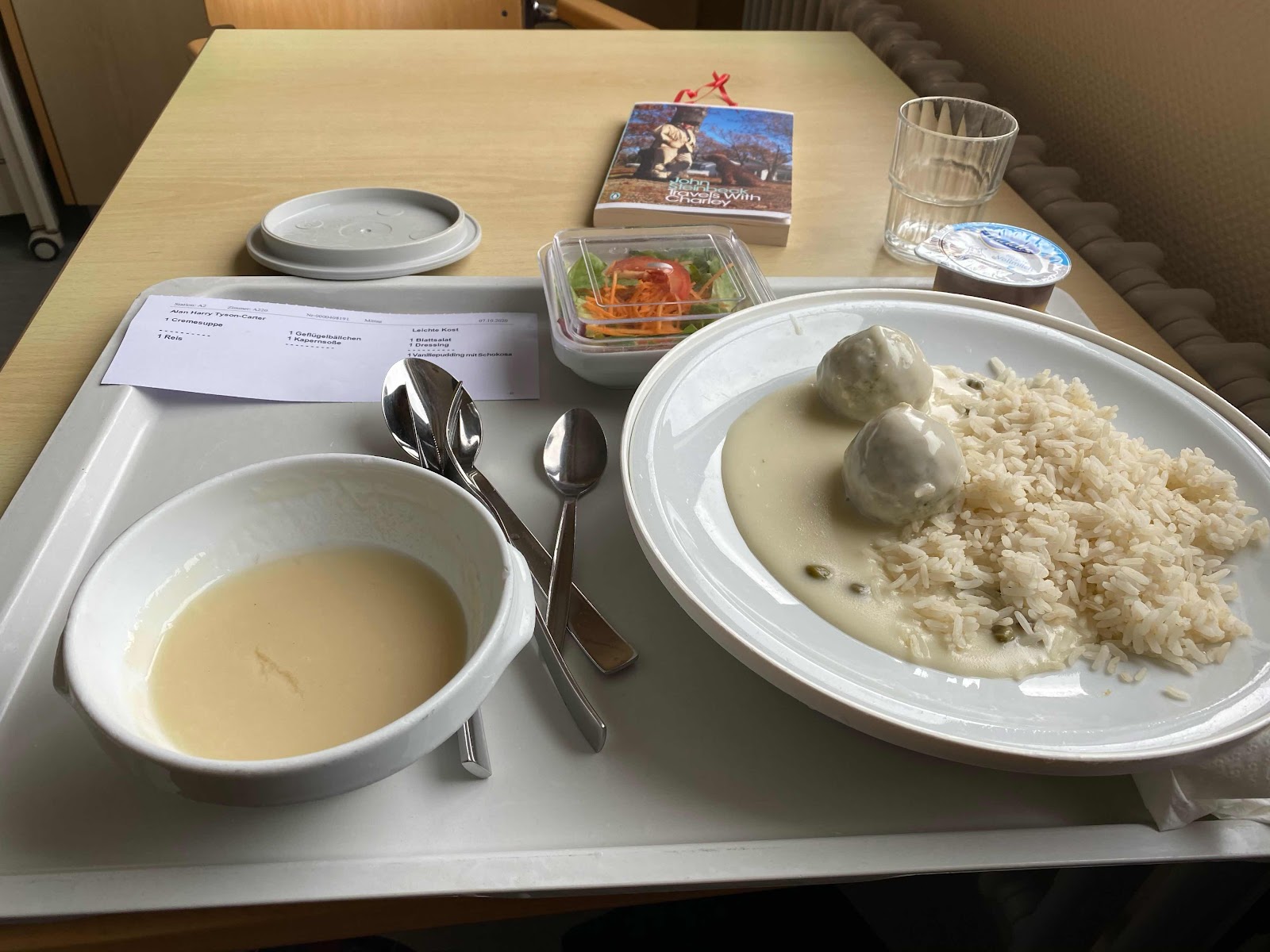 So the forewarned soup only diet was a myth of someone’s imagination! A lady came later in the afternoon to ask what Alan wanted to eat the next day and this confirmed that he would be eating what they call a light diet but included solid food and coffee for breakfast! Coffee though can only be had during the day, Germans just insist on pepper mint tea for old folks in the evening. Alan remarked to us, go with the flow don’t buck the system!
In the afternoon after watching a cooking program we slept some until the evening meal was served. Then we watched TV for the rest of the evening. The events in America are alarming. If the whole of the administration come down with COVID-19 who is going to run the country!
Just before turning the lights out we watch the Lanz talk show on ZDF and they had an American woman supporter of the Republican Party and Donald Trump who was floundering, but attempting to justify Trump and hi policies. She really floundered when she tried to explain that Trump saying that he could just kiss and grab women by their pussy,  was just locker room talk and meant nothing. The other all German panel members looked incredulously. We couldn’t take her poor attempt at argument and switched the TV off and went sleep!
We were rudely awoken at 06:30hrs when a nurse came in with a new patient to occupy the next bed to ours. A Herr Zimmermann. Our human rolled over and did his best to ignore them. By 07:30hrs it was all over trying to feign sleep as the No 2 Surgeon came on his rounds. He explained that the muscle ache our human was feeling was normal. They after all pumped up his tummy with gas which stretched it wide. Some patients complained of shoulder ache as well. Alan replied that he had neck ache too, which he had attributed to the hard pillows! All normal the surgeon replied. He also confirmed that we would be released tomorrow morning after breakfast, providing the liver values were ok. More blood would be taken today to test that it was. Certain values were a little high, though he didn’t say which and departed before we could ask!
After the Drs circus had left Herr Zimmermann was wheeled away for his op and we were served breakfast! 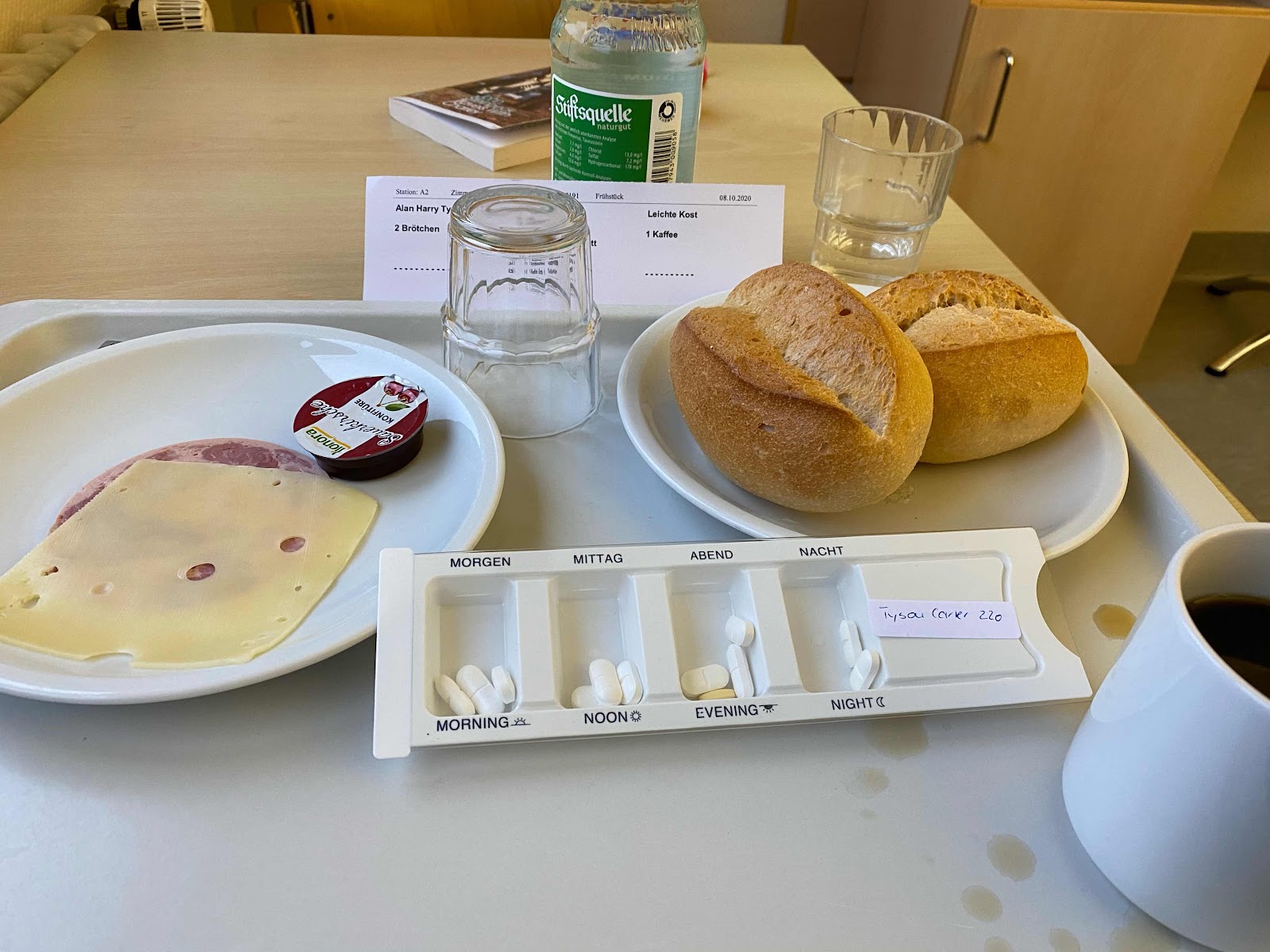 Ibuprofen was given to help with the pain and to reduce inflammation, four times a day!
After our breakfast our human had the three S’s as one would say in the Army! The plasters all had to be replaced after that and so he was able to get dressed and escaped outside for an hours walk round the town.
When he returned Herr Zimmermann was back from his op, but clearly befuddled still, so we left him alone. Mind you the nurses didn’t, they came to test his blood sugar etc. He is a little hard of hearing, so all discussion takes place in a high volume setting.
Lunch was served! 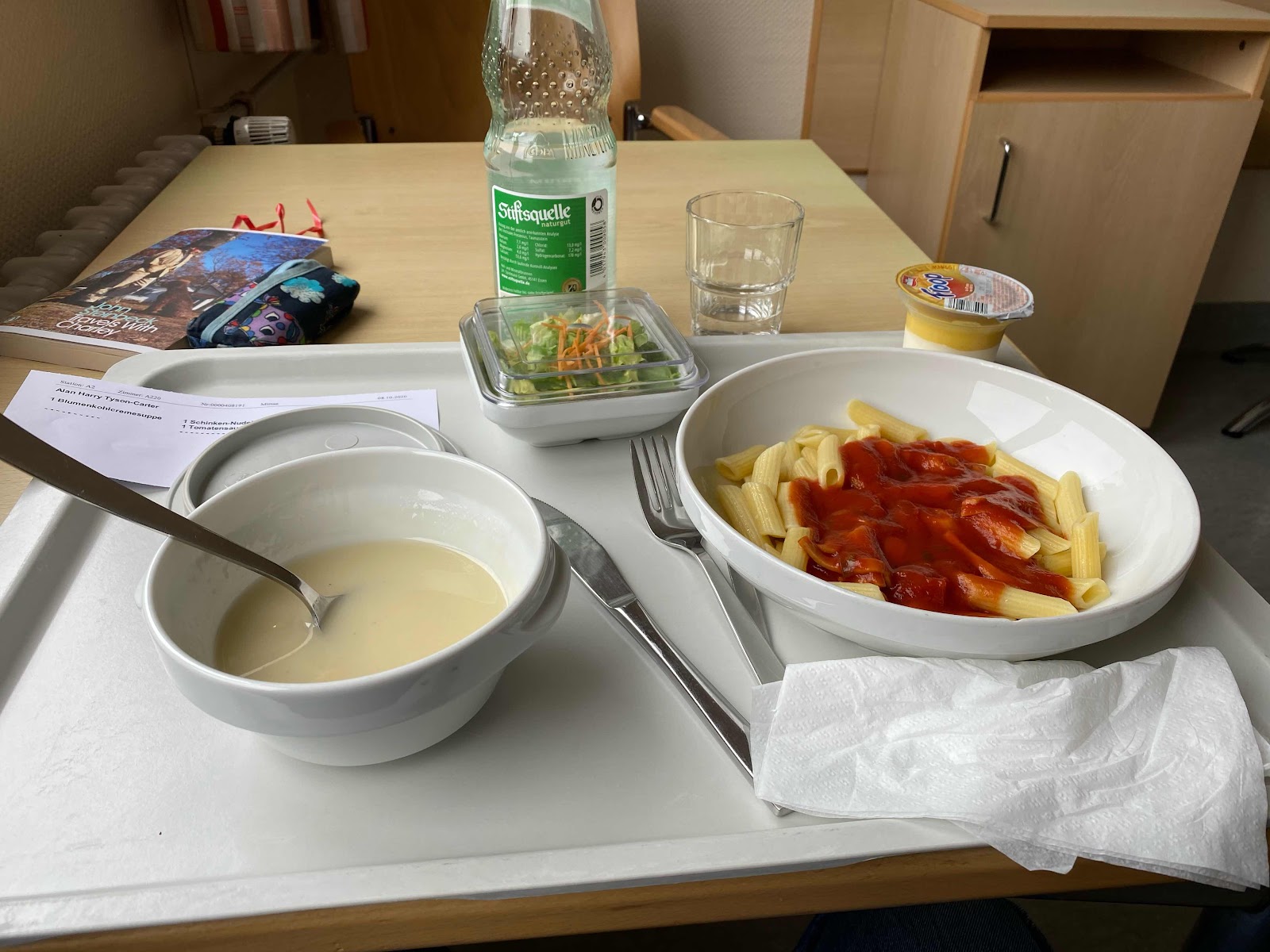 And eaten!
Now it is a question of reading and waiting until tomorrow when we hope to be let out!
We were rudely awoken at 06:20hrs on our last day by a cheery nurse wanting to measure our blood pressure and to take our temperature. Then came the first Dr, Mohammed, who took the sexy white stockings off of Alan and Herr Zimmermann amongst other things that Drs do to patients so early in the morning. He mentioned that Alan’s liver values were all ok and that we could leave after breakfast!
At 07:30hrs Dr Querling came and did his rounds and confirmed that we could leave the hospital today. Alan’s GP would take the stitches out and he was not to do any heavy lifting for at least 10 days, but yes he is allowed to ride his bike!
Sigrid was early and kindly gave our BBF a lovely bunch of flowers to welcome him home and wish him a speedy recovery! 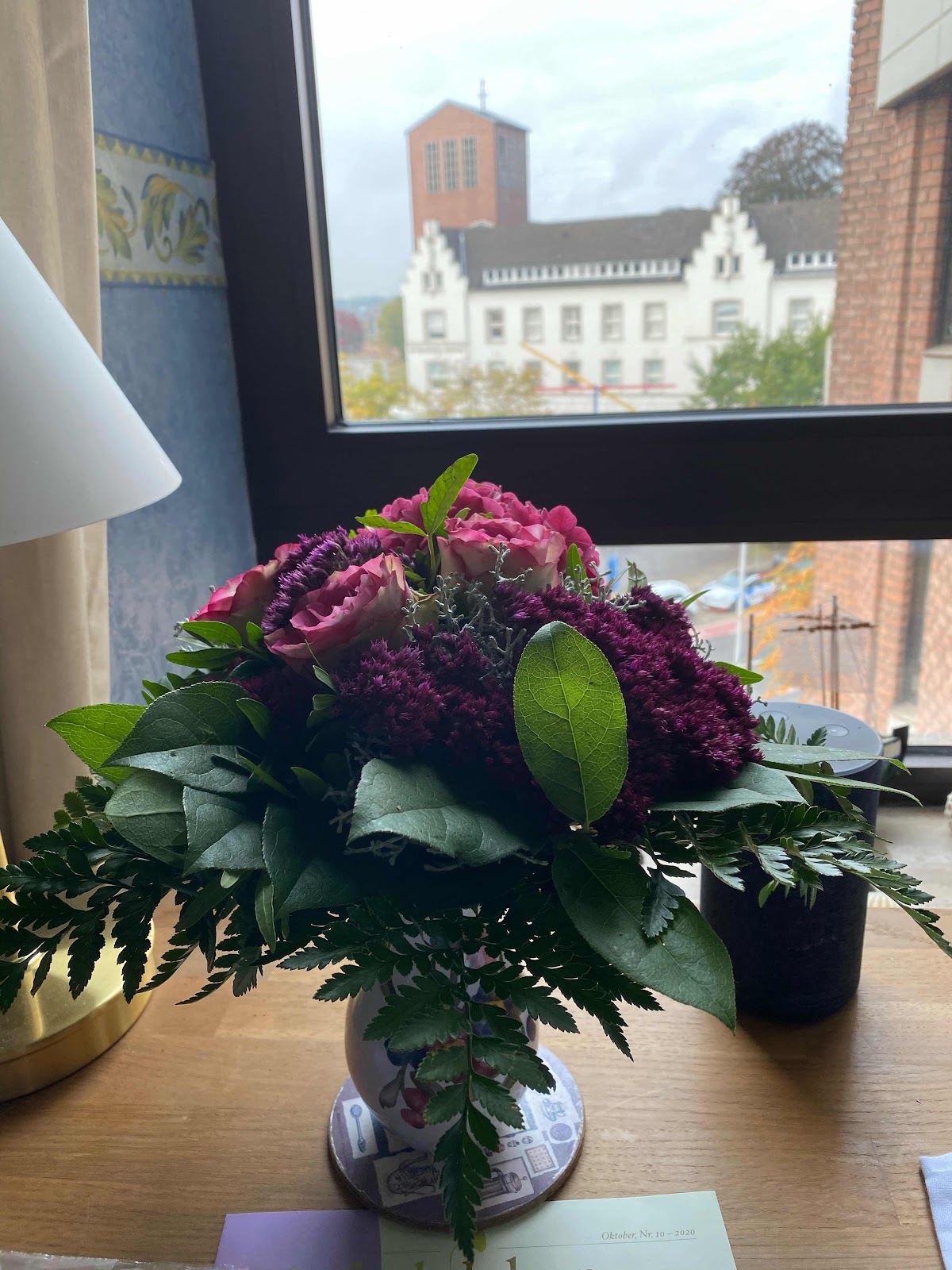 In his letter box he found a surprise gift from Anna and Oliver! 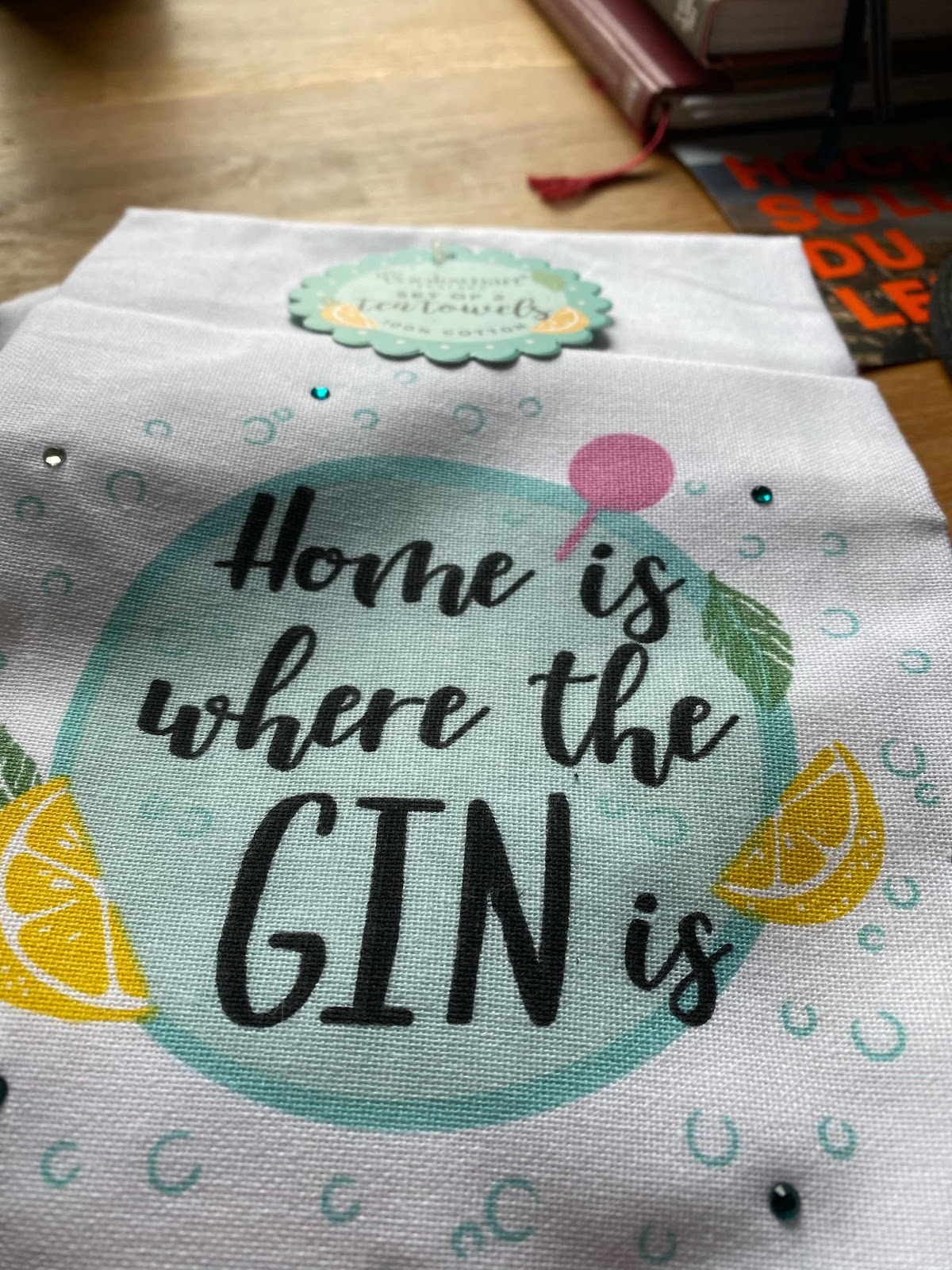 Life is good when you have such good friends!  Stay negative folks.
Yours
Jamie and Hanna Bear!
Posted by Alan Tyson-Carter at 10:09 No comments: