Just before Christmas, friends of our BBF invited us to come and stay in their Senglea flat one last time before they sell it! There was no discussion, we all agreed and leapt at the chance to visit one more time.

Alan was so keen to come, he had a momentary senior moment, and booked flights for a three week holiday, before realising that he had to be in Germany for Vincent’s fourth birthday! A moment of sheer panic gripped him, which lasted some 24 hours, until he sorted it all out and rebooked the flights for just two weeks!

Jürgen kindly collected us the day after Boxing Day and took us to the airport. We were booked on a Lufthansa flight going first to Munich, where we stayed the night. The fun part was that the outward flights were all Business Class! Thus it was that we enjoyed meals at no extra cost in the Lufthansa Lounges in both Düsseldorf and Munich. 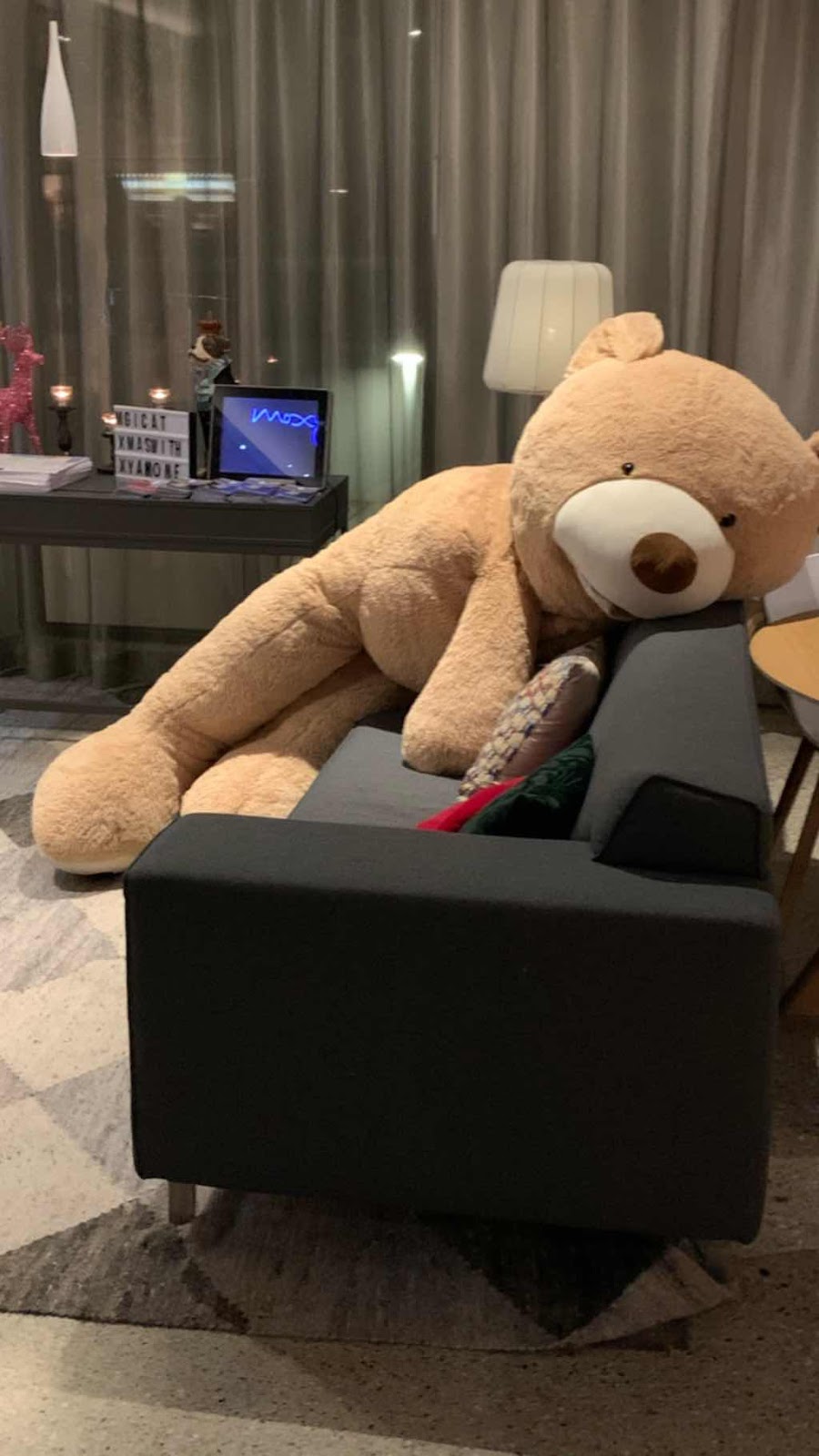 We got to Munich late at night and stayed in an airport hotel and were greeted by a giant of our tribe! 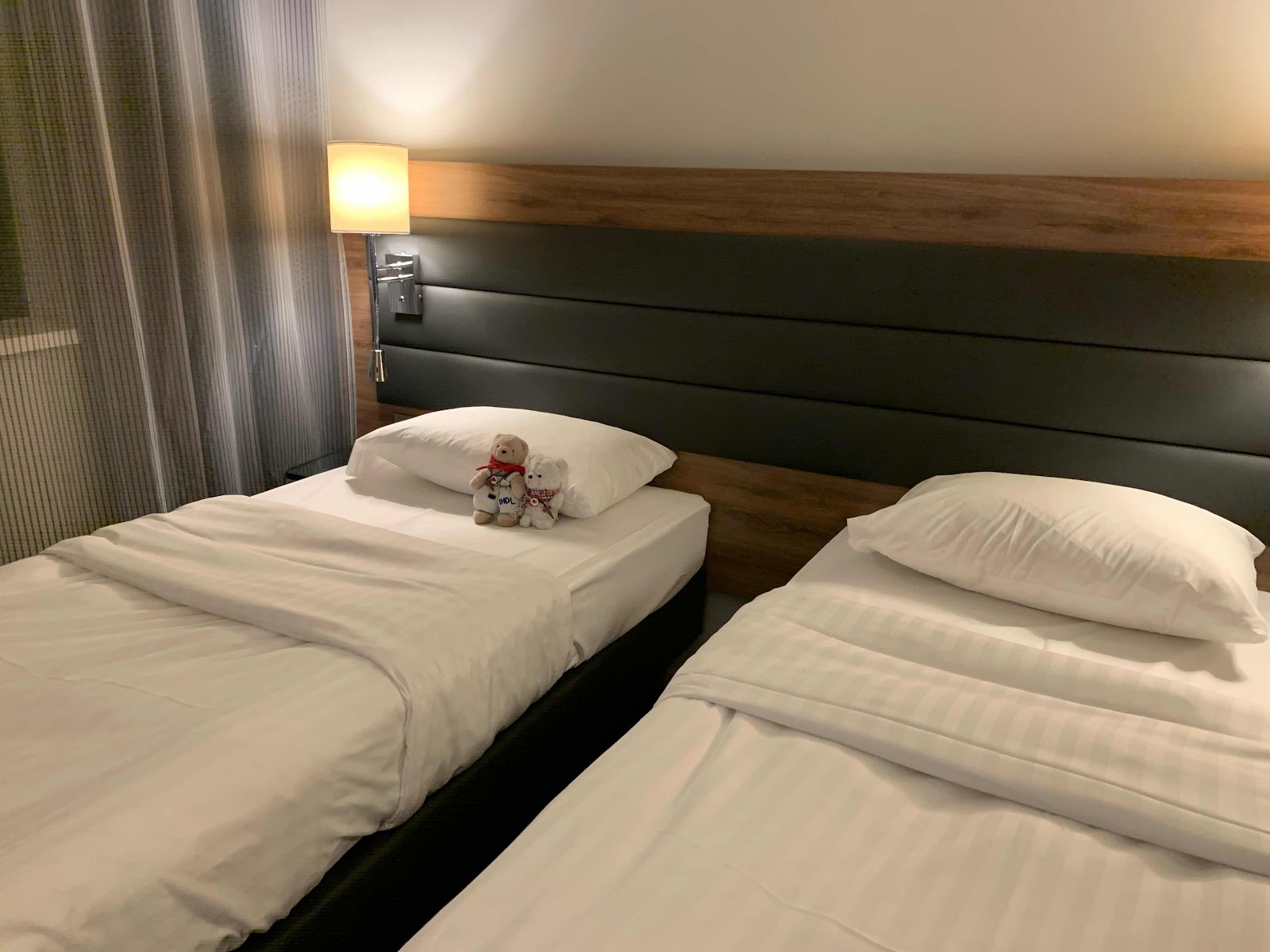 Early the next morning we set off for the airport again without breakfast! 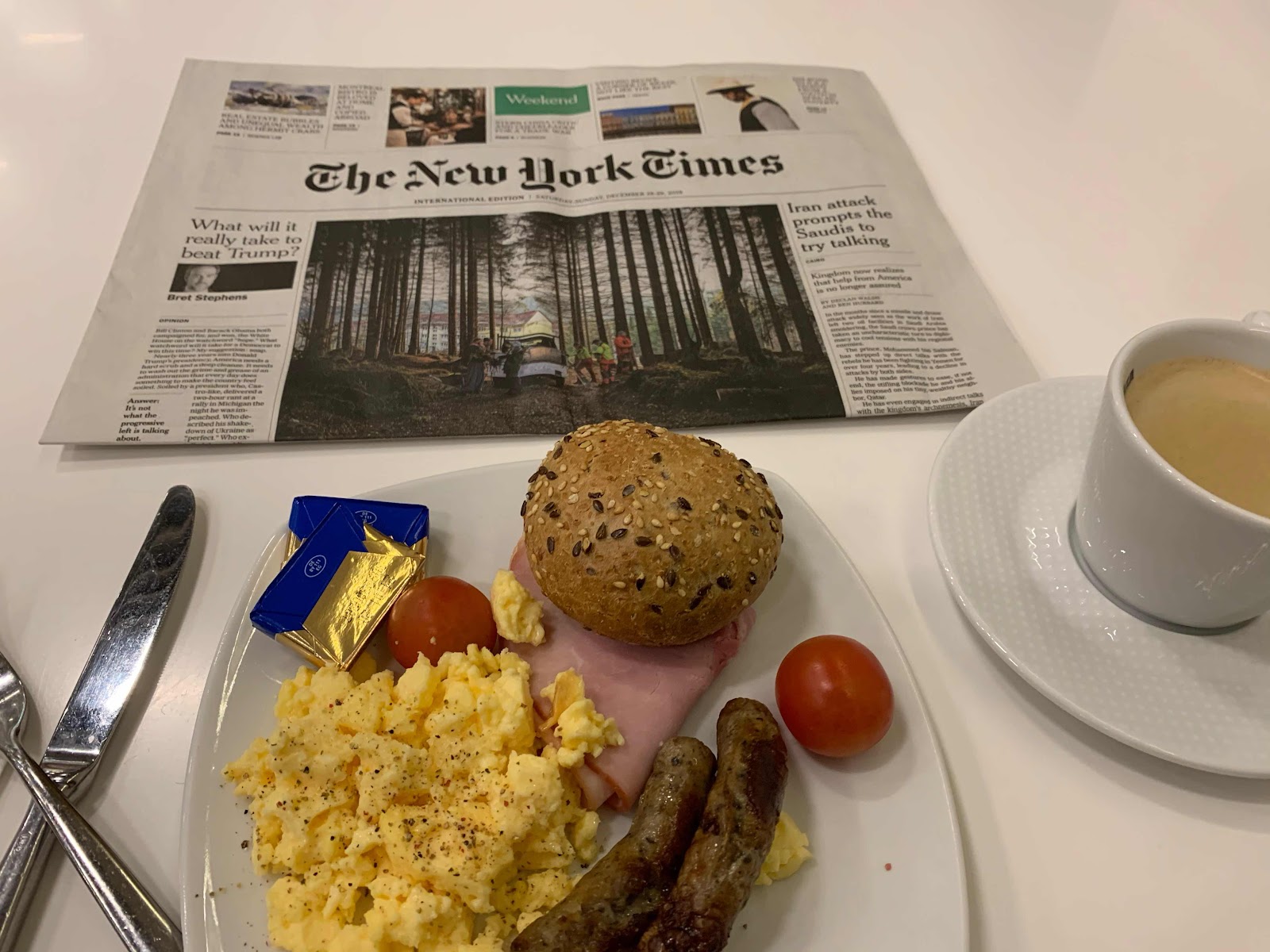 But one was served in the Business Class lounge.

It was cold and frosty outside! 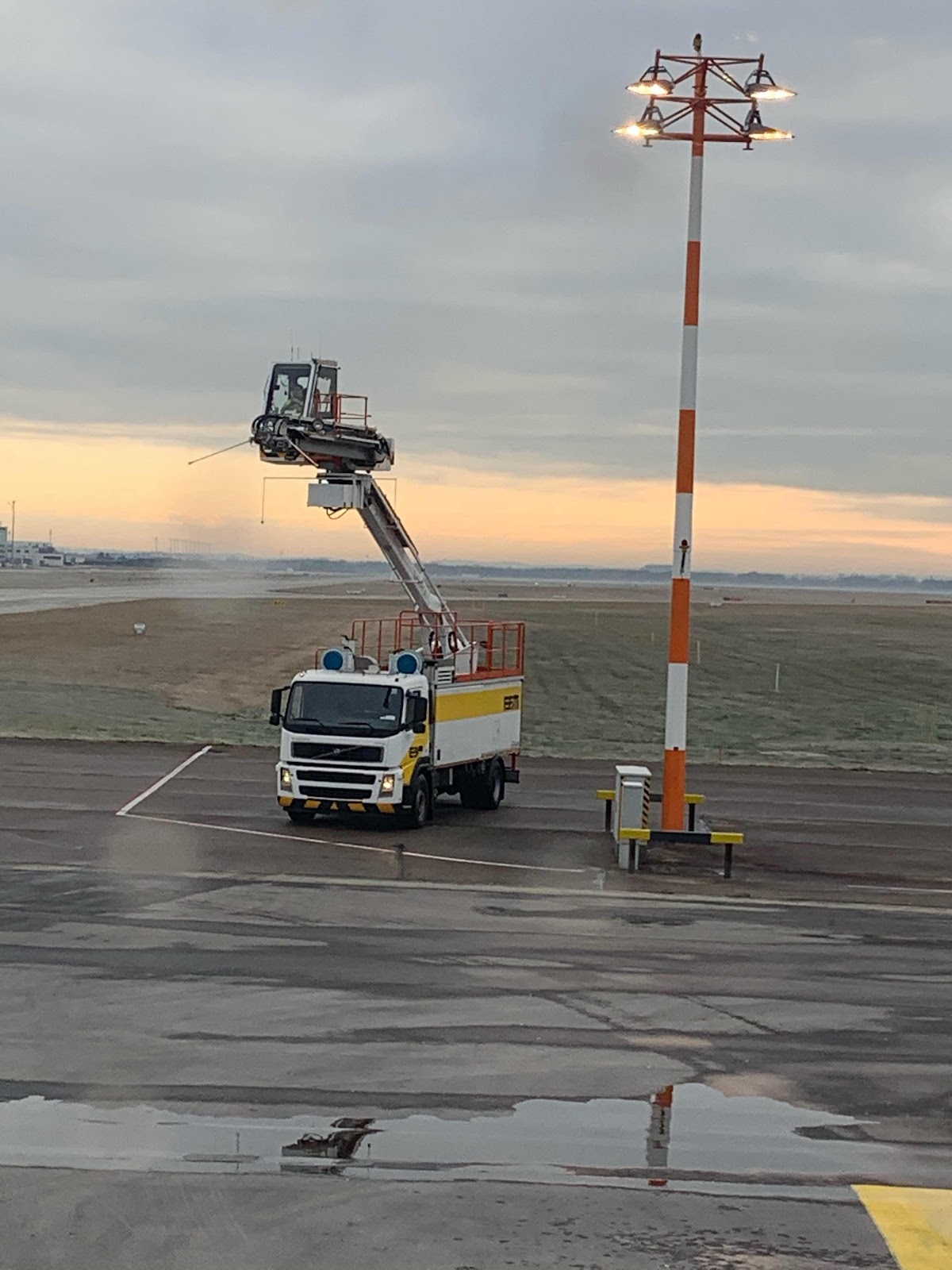 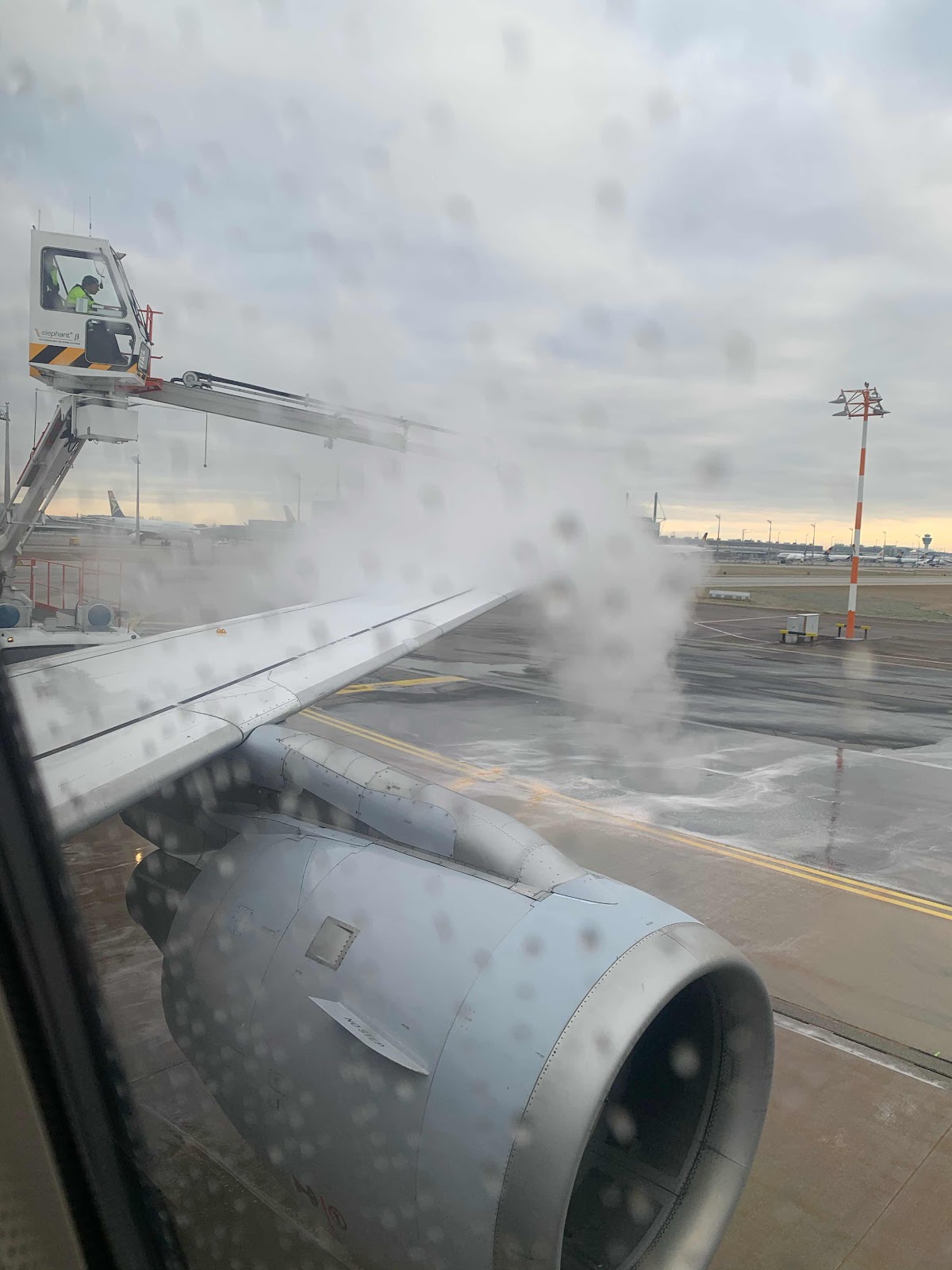 They took the precaution of de-icing the plane before takeoff! A necessary evil which didn’t look very environmentally friendly!

We were served throughout with small eats all served with real metal cutlery! It made us wonder what the peasants back in cattle class were served! Alan thought a ham or cheese roll!

Vince a very friendly chap collected us from Luqua airport and drove us to the flat in Senglea. 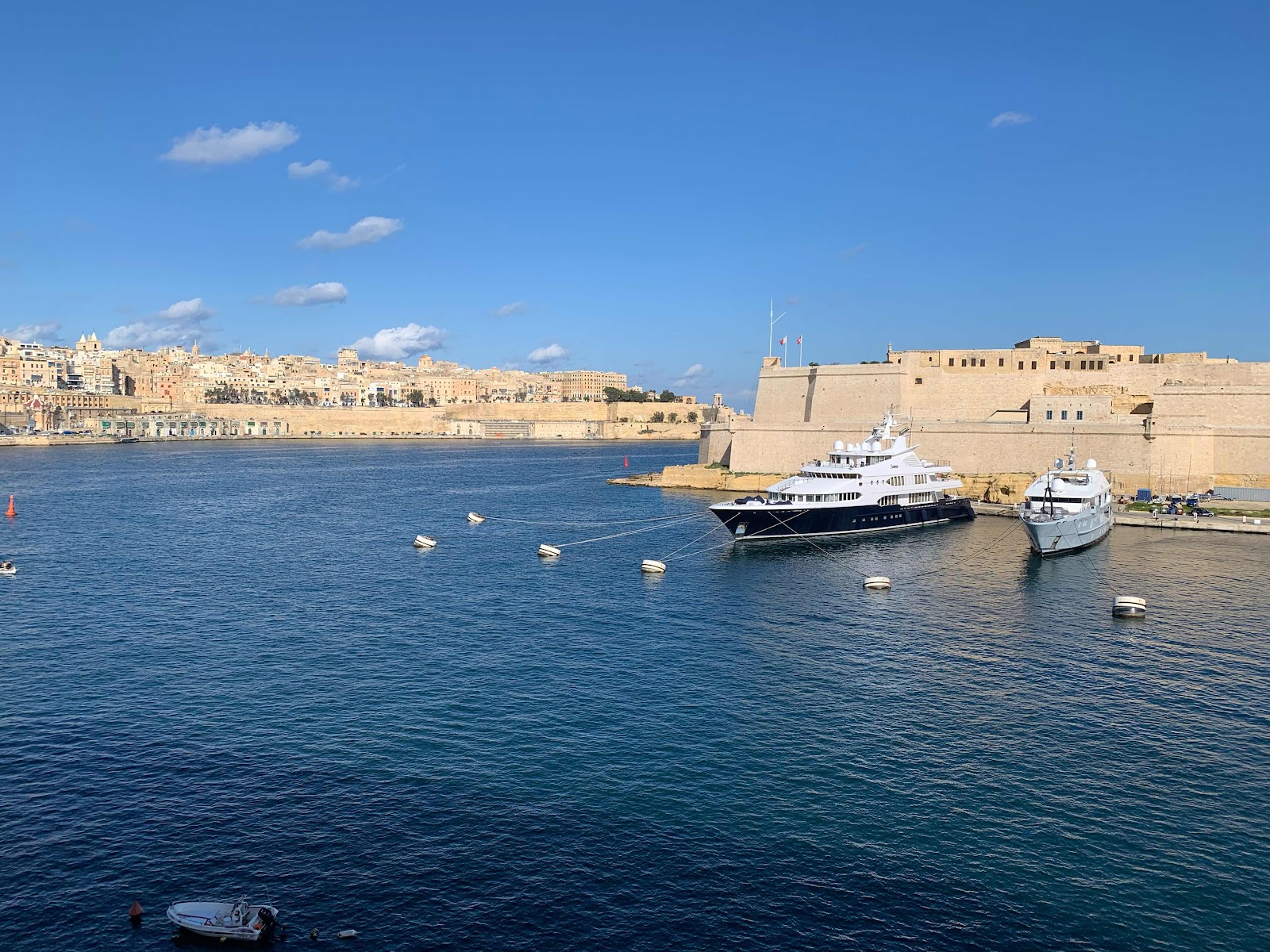 The first thing Alan did on arrival was open the balcony doors wide and admire the view. Little it seemed had changed. 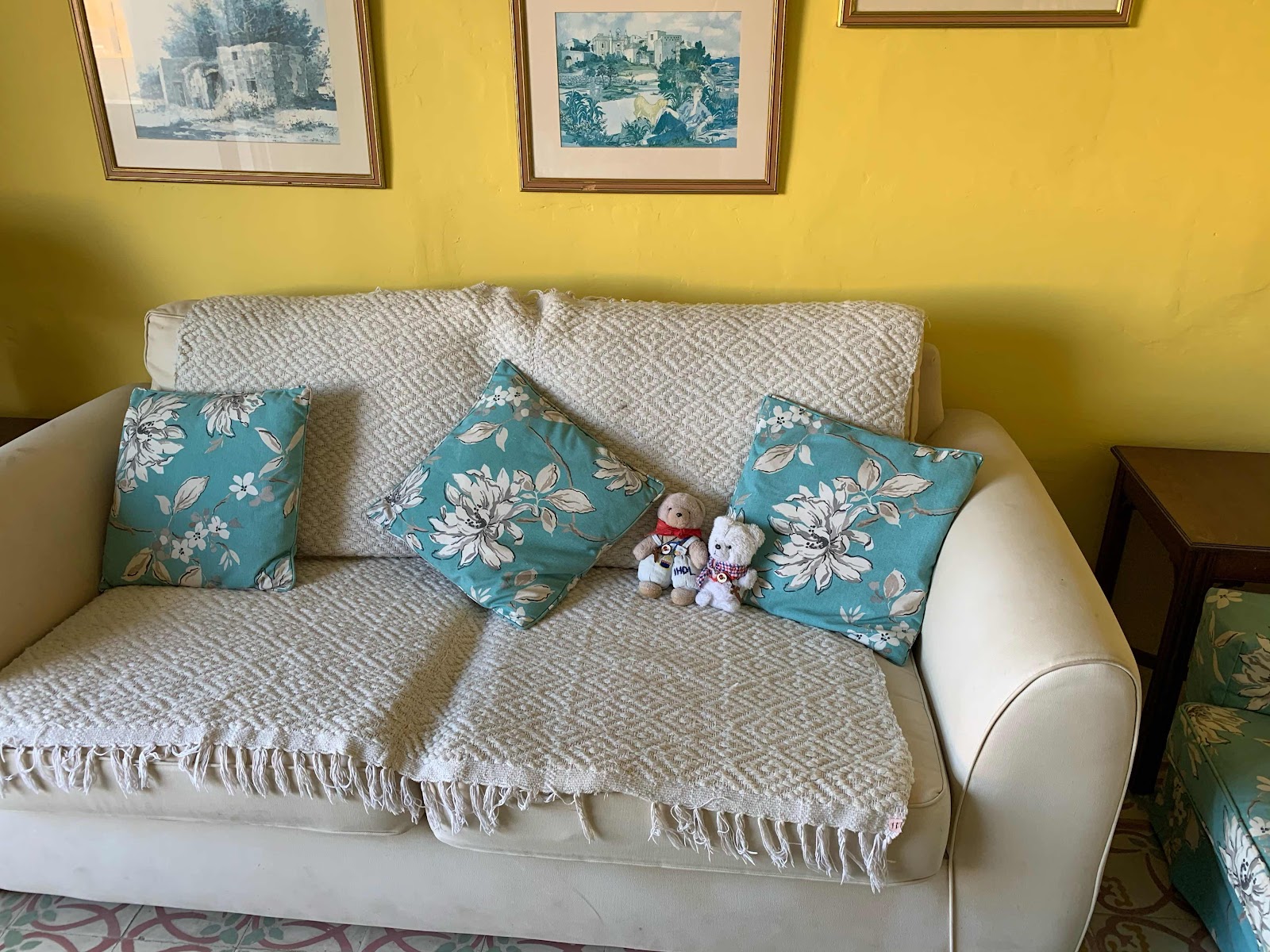 Alan’s friends had ensured we had the basics of coffee, tea milk and sugar, as well as the makings of a breakfast. As we arrived on a Saturday the next thing we did was go out shopping to get the bits for evening meals etc.

It is five years since last we were here and so now we noticed that things had changed a bit. At the end of Dockyard Creek for example the dockyard building had been turned into the American University of Malta! 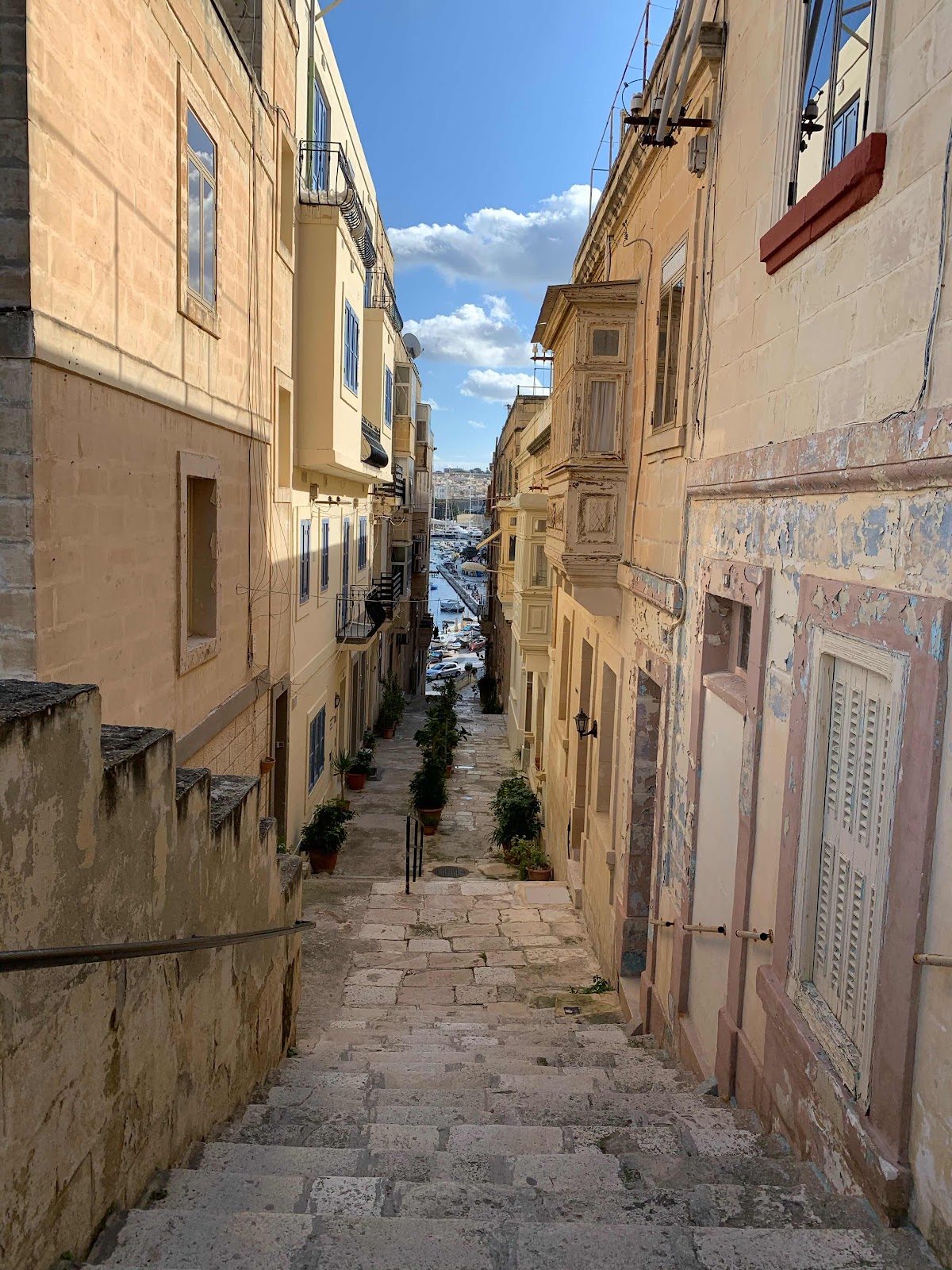 We live on a hill so there are many steps to go down and up to get anywhere. Our BBF will be a bit fitter when we get back and hopefully will have walked off his Christmas fat.

There’s no TV so reading is the pass time of an evening which Alan feels is no real hardship and has read four novels in the first week!

On our first Sunday we took the ferry into Valletta and were surprised by the number of people on the streets. There was no cruise ship in the harbour so where did all the tourists come from? 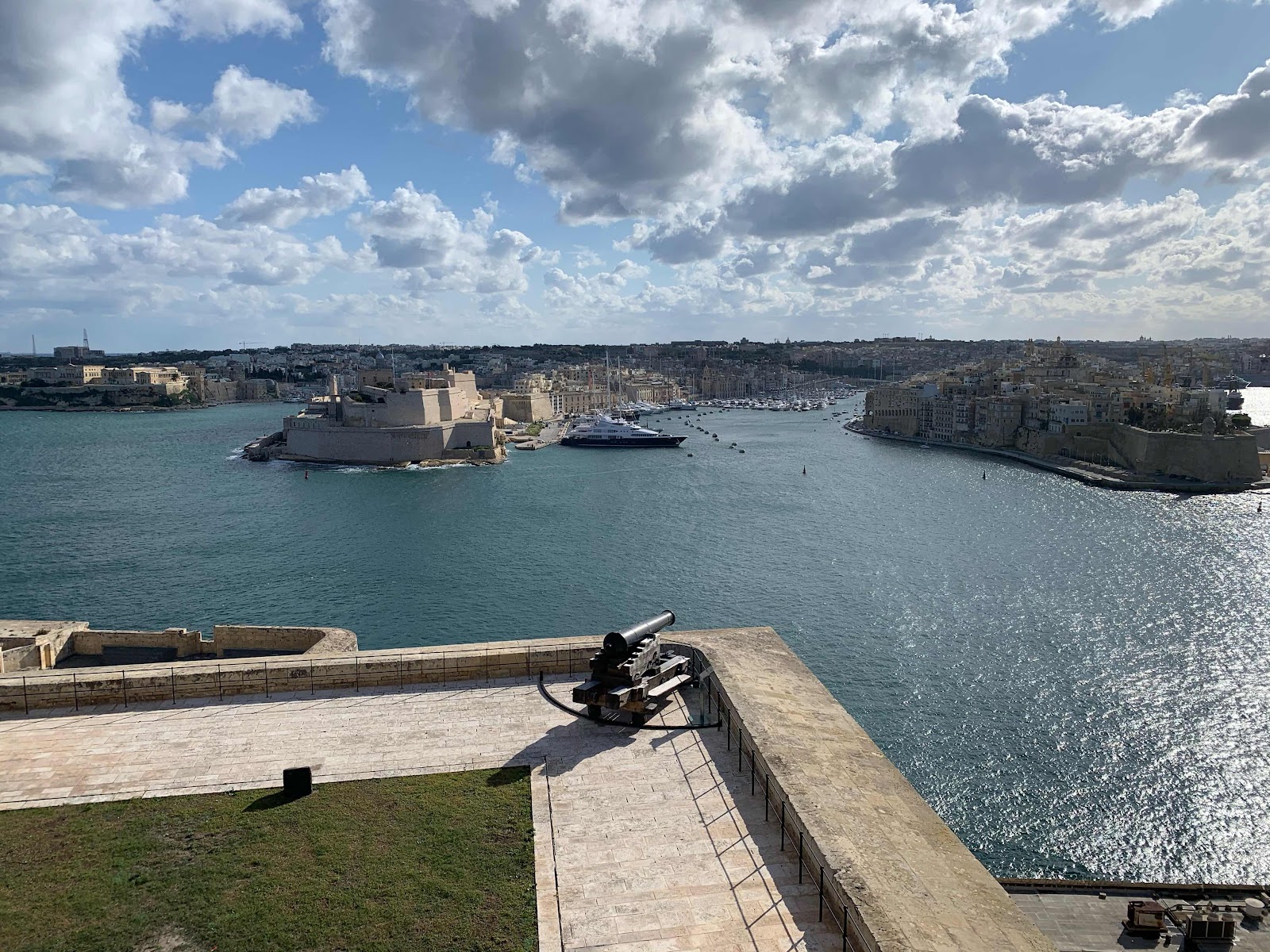 The view from the Upper Barraka Gardens to the Three Cities and Dockyard Creek in the middle.

Malta has been more Catholic than the Pope ever since St Paul’s visit in the first century AD. 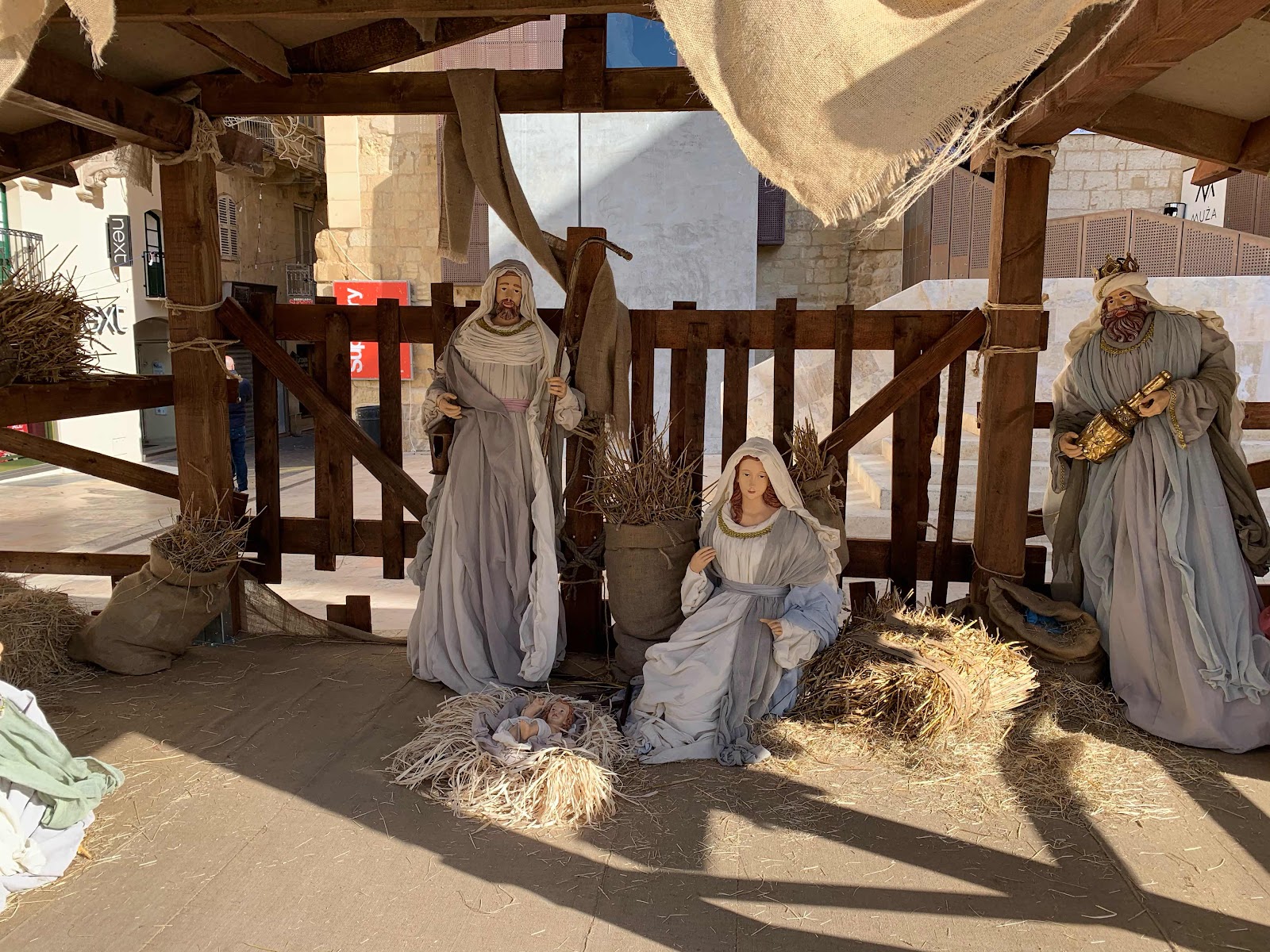 So one is not surprised to find a life size Crib dominating a small square. 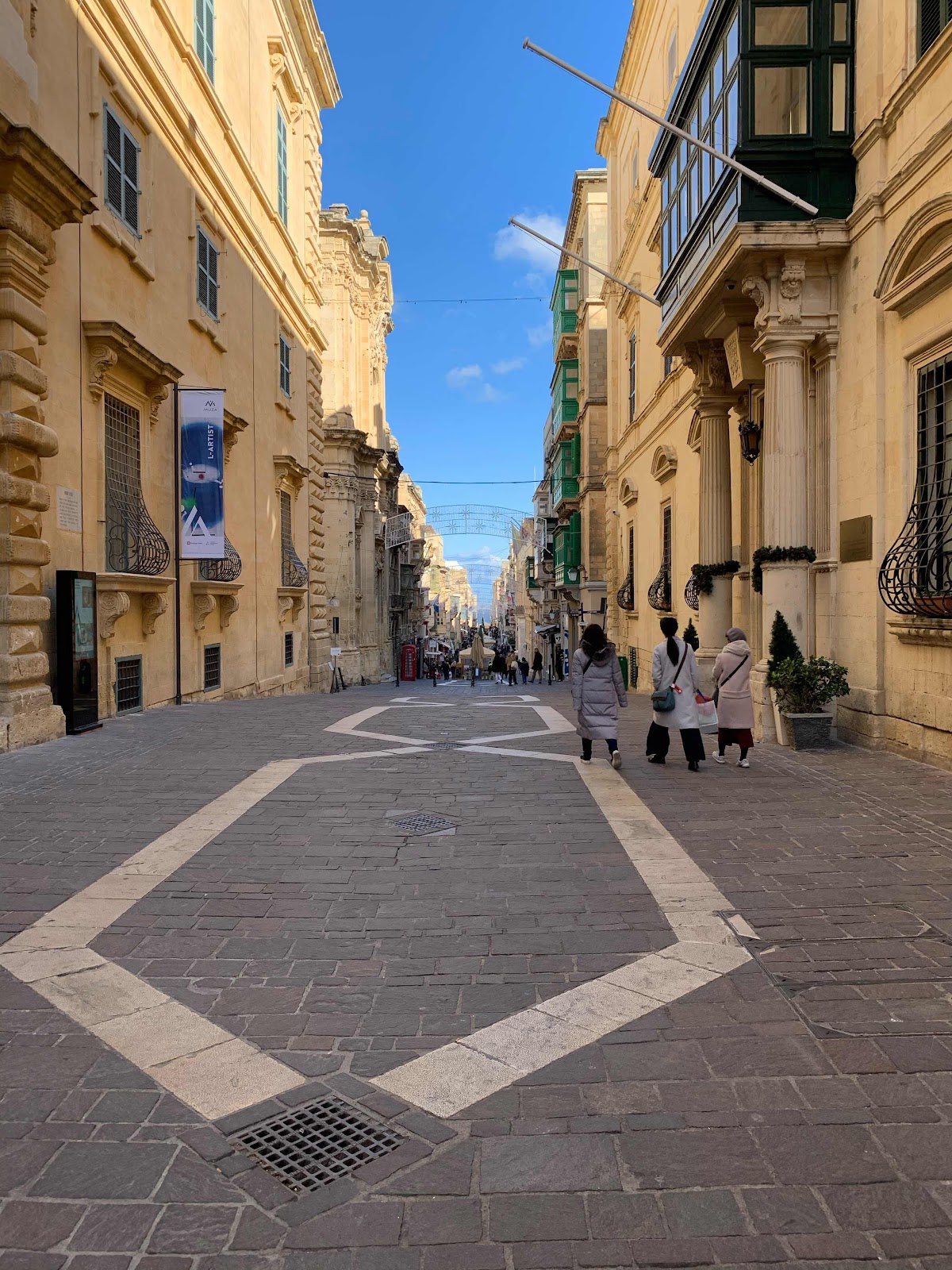 We made a mental note to return at night to see the lights.

Alan has a comrade living here so one day we went to visit him. Terry and his partner Jill work on rich folks yachts. 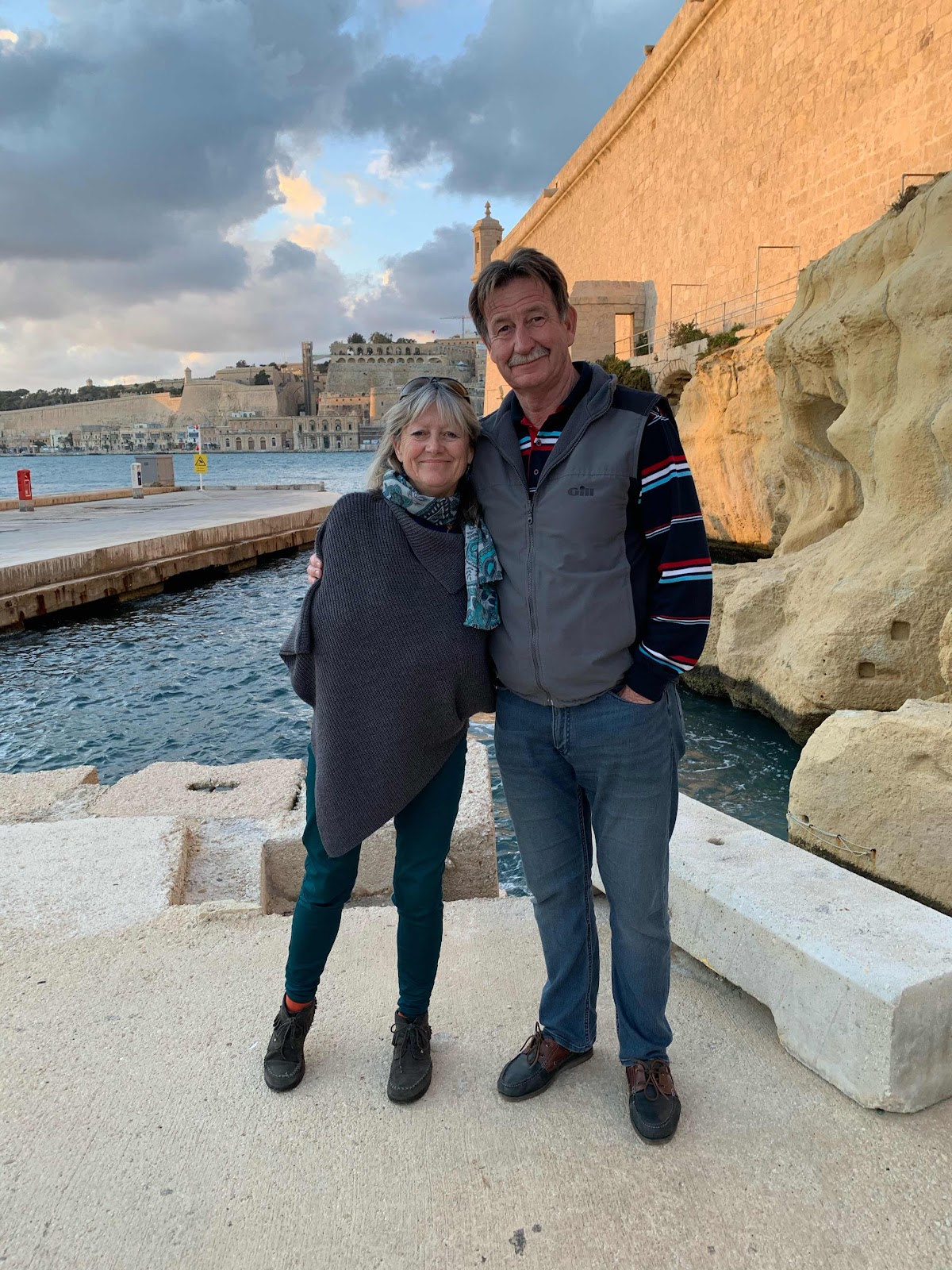 Terry’s yacht is a floating gin palace, but very well appointed and it is in good condition thanks to Terry’s hard work. Jill on the other hand manages a real sailing vessel, a Camper and Nicholson super yacht! 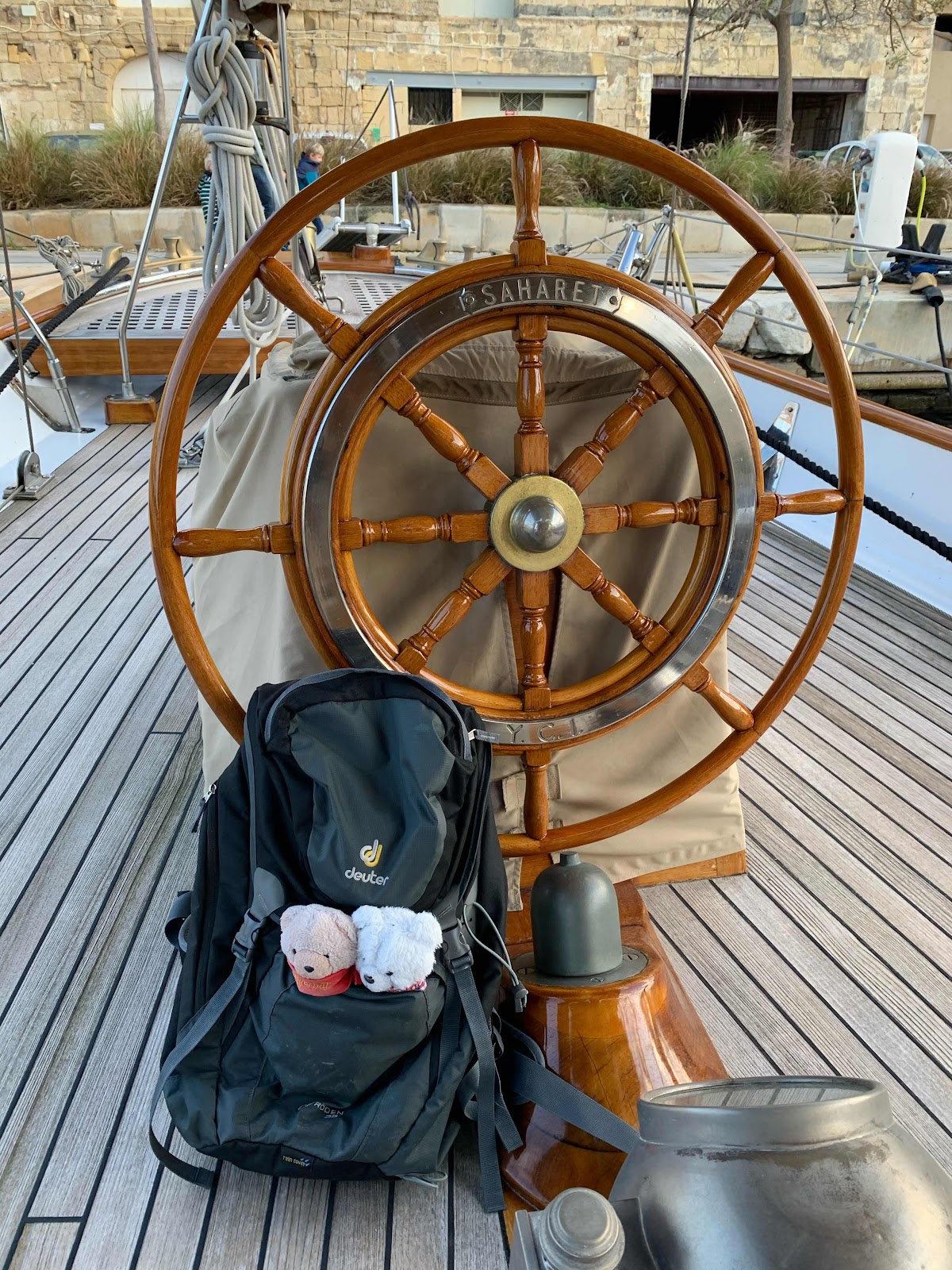 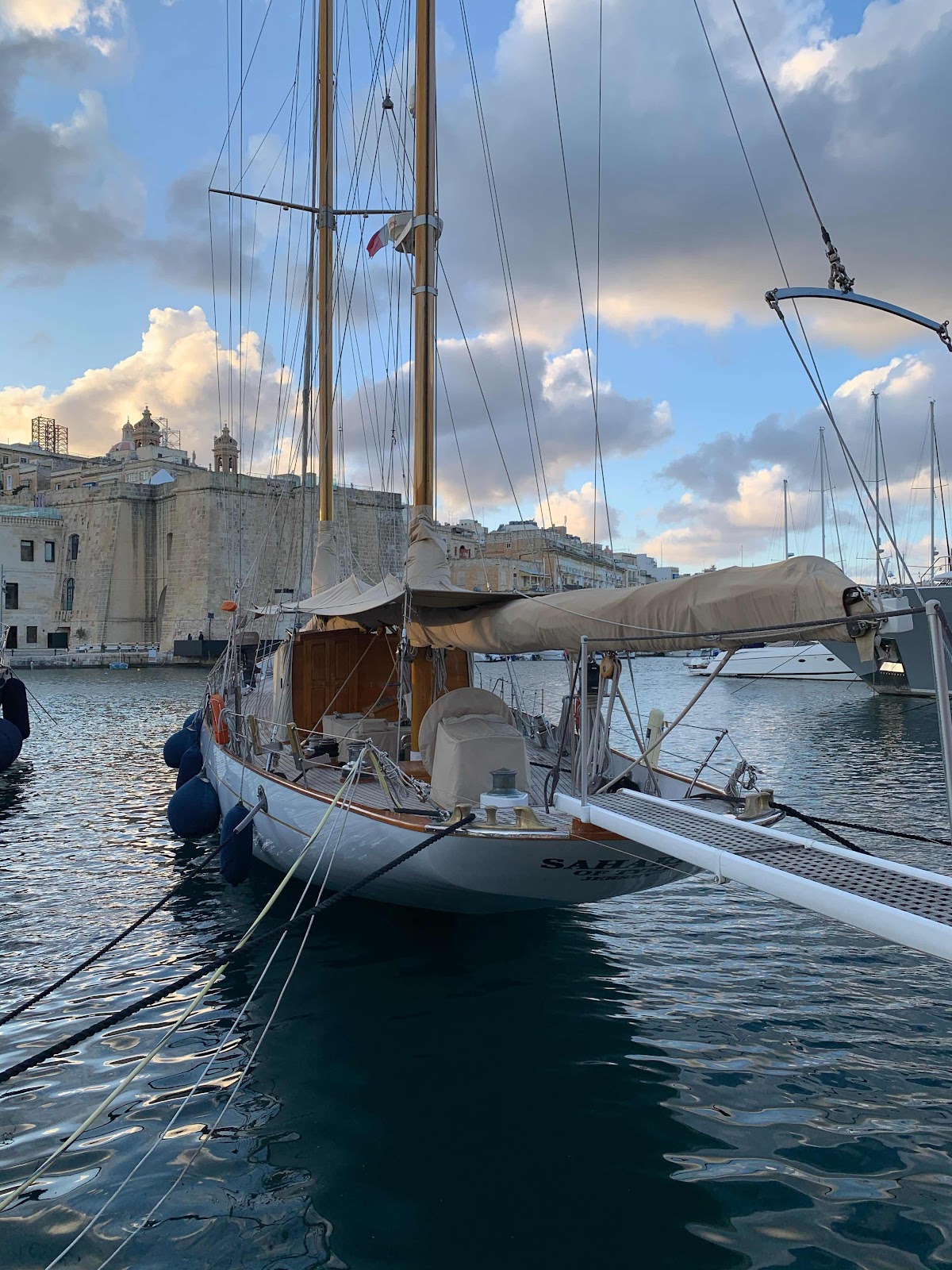 This too is in super condition thanks to Jill’s hard work. We much enjoyed being shown over these two vessels.

On New Years Eve a Gregale was blowing so all ferries were cancelled which put paid to our intention of going into Valletta! Instead we watched the fireworks from the balcony! 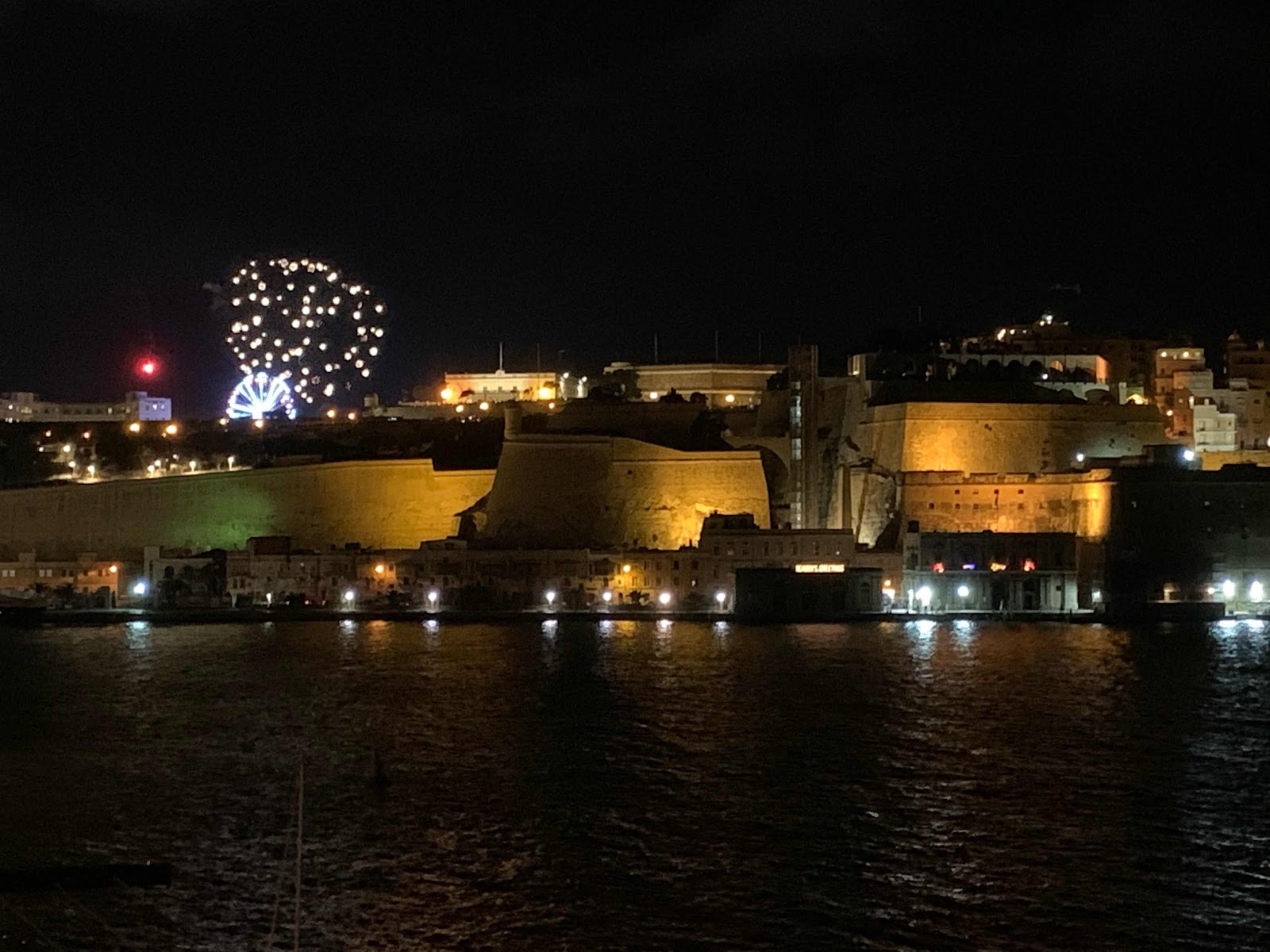 On Wednesday Terry and Jill invited us to go for a hike along part of the Victoria lines. They met us off the ferry and took us to somewhere just outside Mosta. 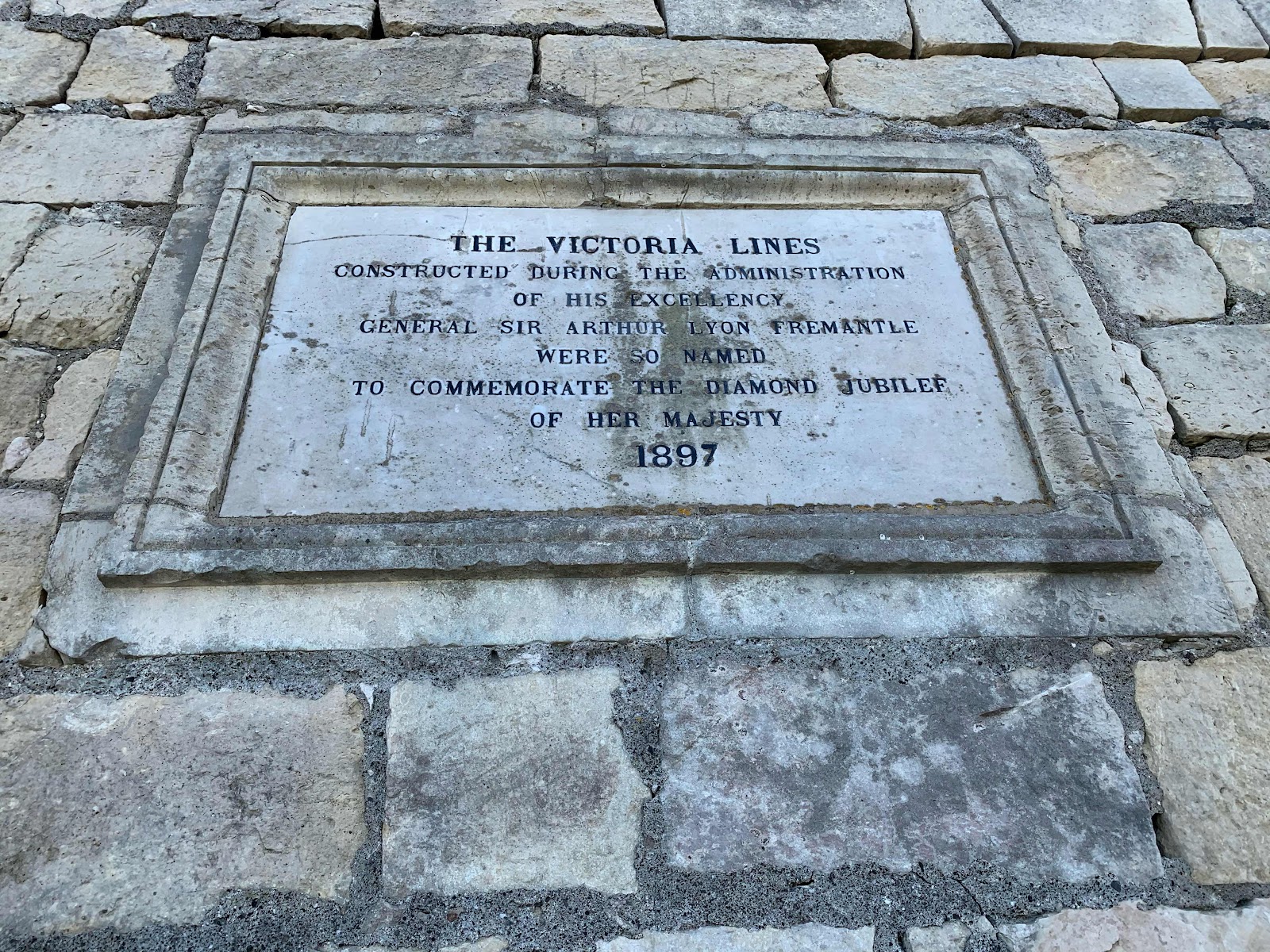 Jill pointed out the plaque commemorating the building of this defence work, which largely goes unnoticed by the cars thundering bye on the road beneath it. 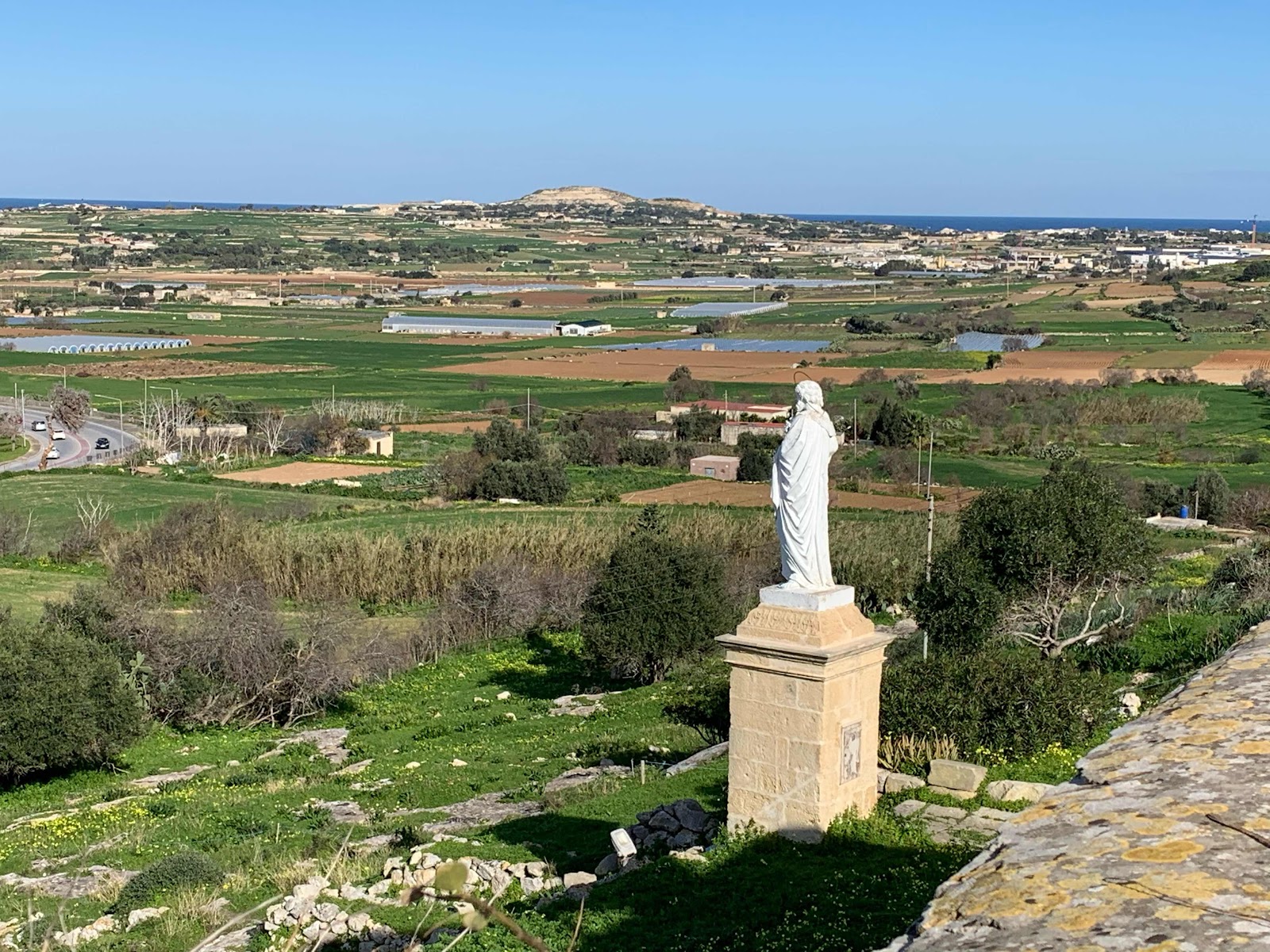 There are fine views over the island from here. 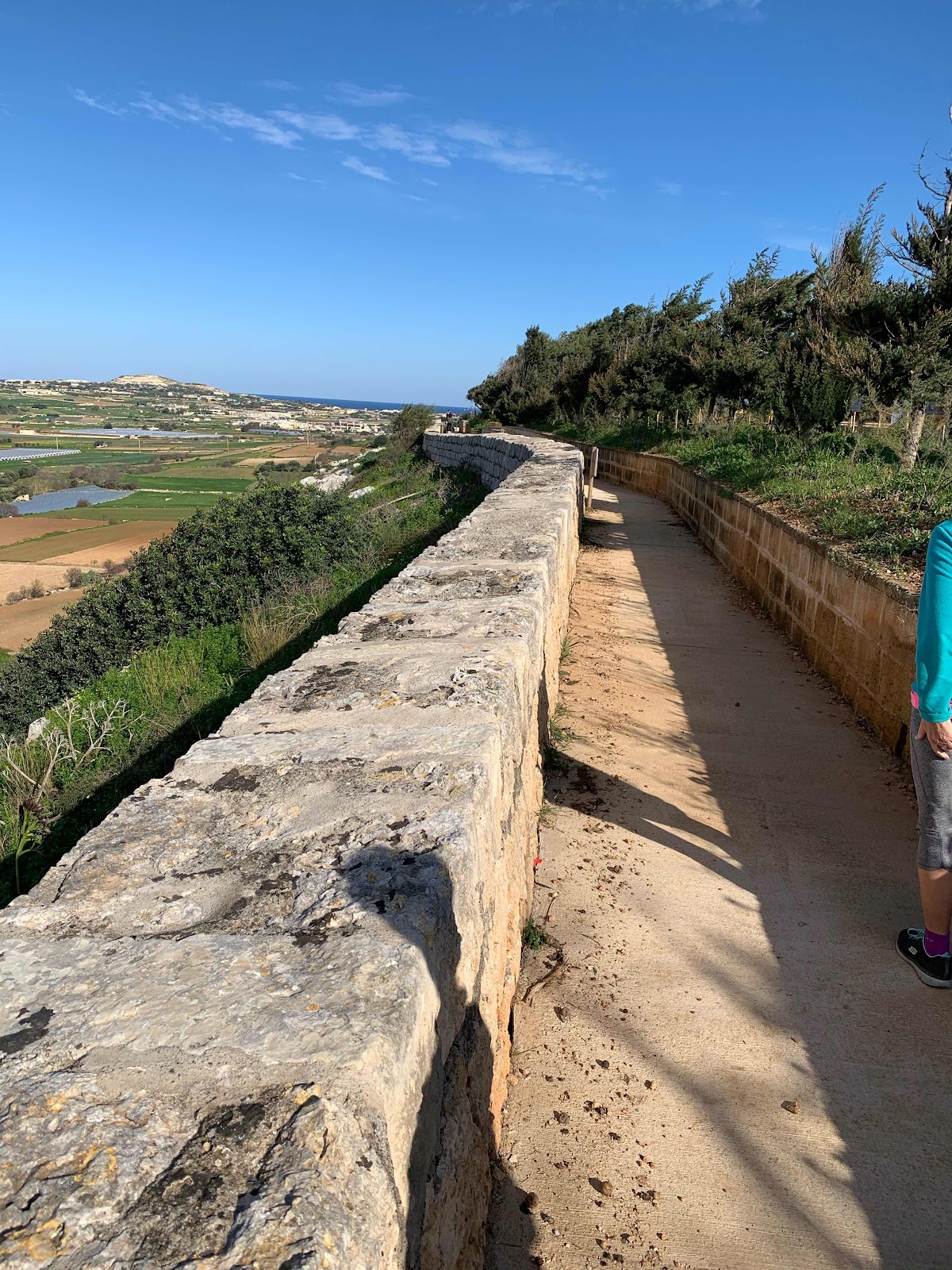 The start of our walk was easy and along the wall. It actually runs from 30 miles coast to coast along an escarpment and is a natural defence position for an enemy that has landed on the only beaches of Malta, which all lay to the North of the island. 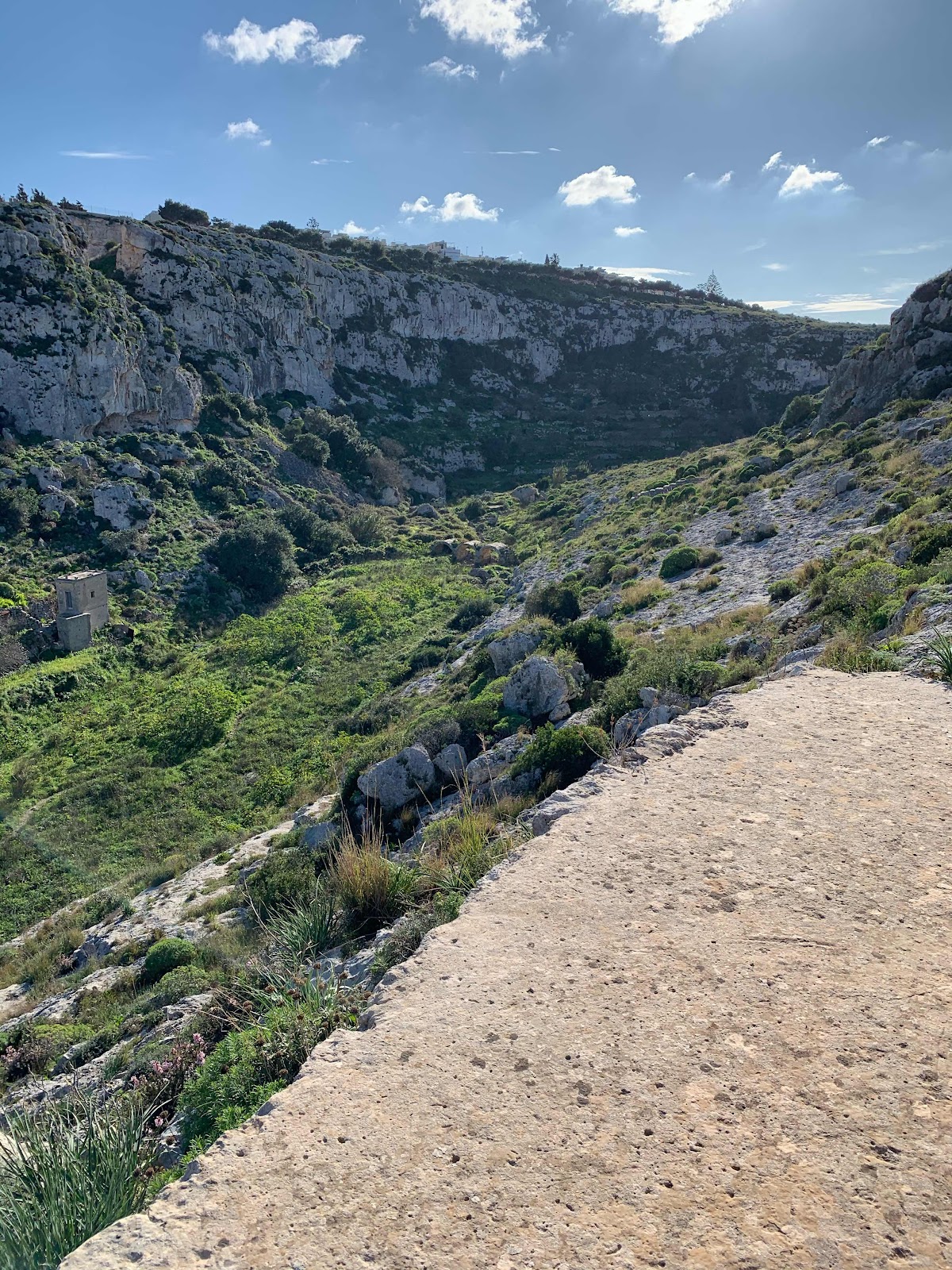 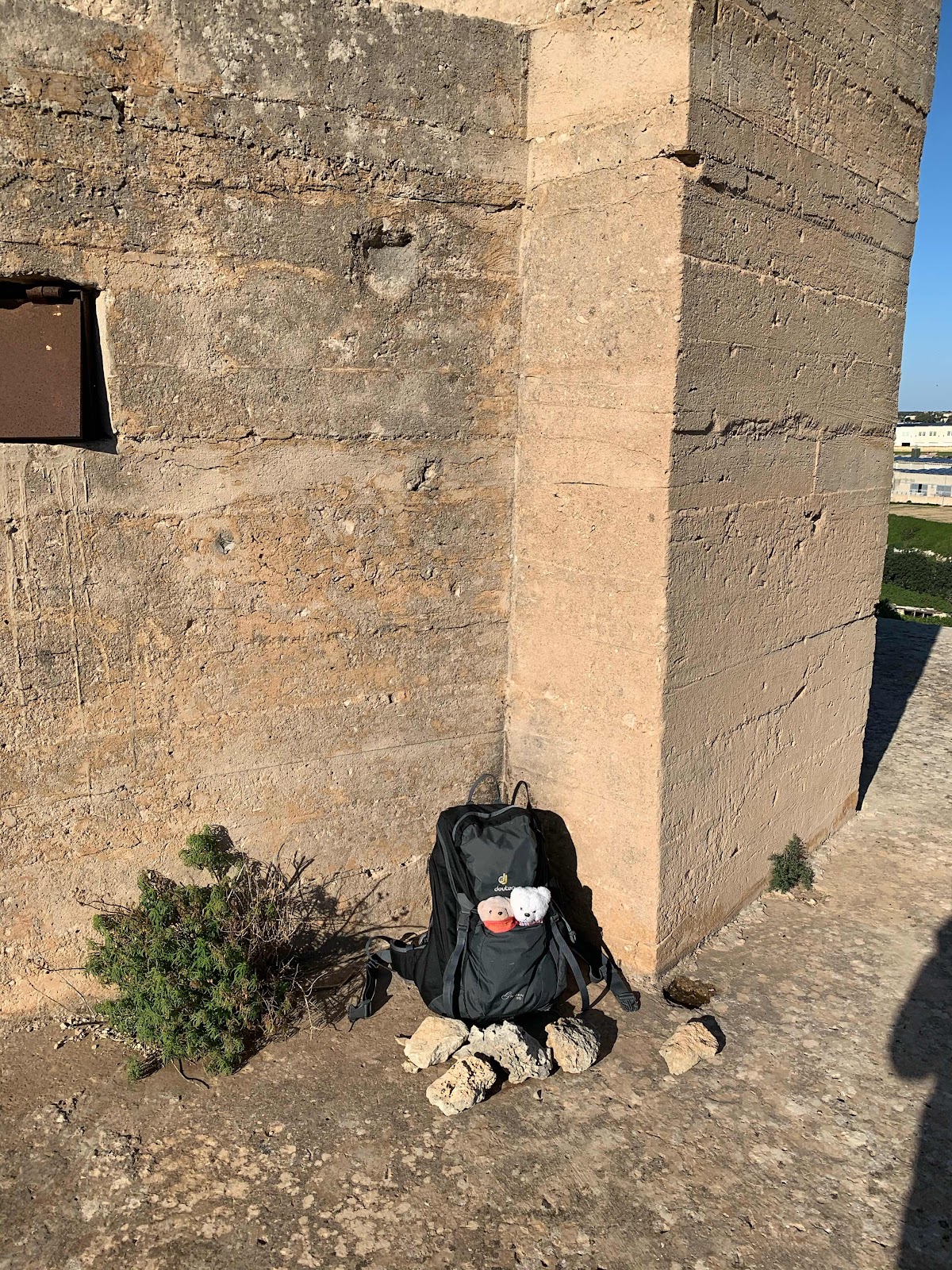 There are Victorian Forts and even WWII pillboxes at various places along the wall. Our mad BBF actually climbed across a sheer cliff to get to this pillbox, while sensibly Terry and Jill followed a goat track into the valley. 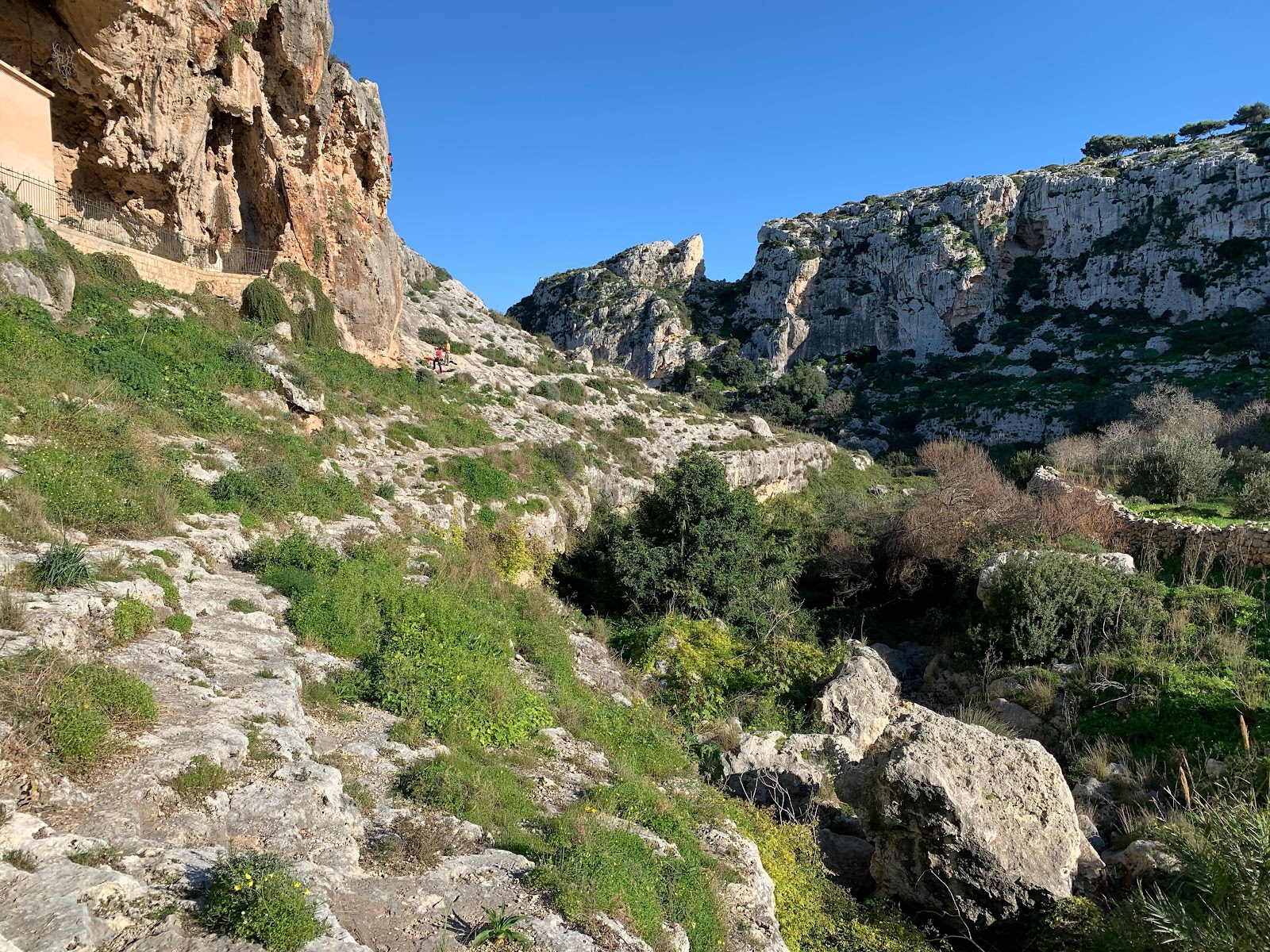 The cliffs here are a favourite with rock climbers and a few were out enjoying the fine weather. 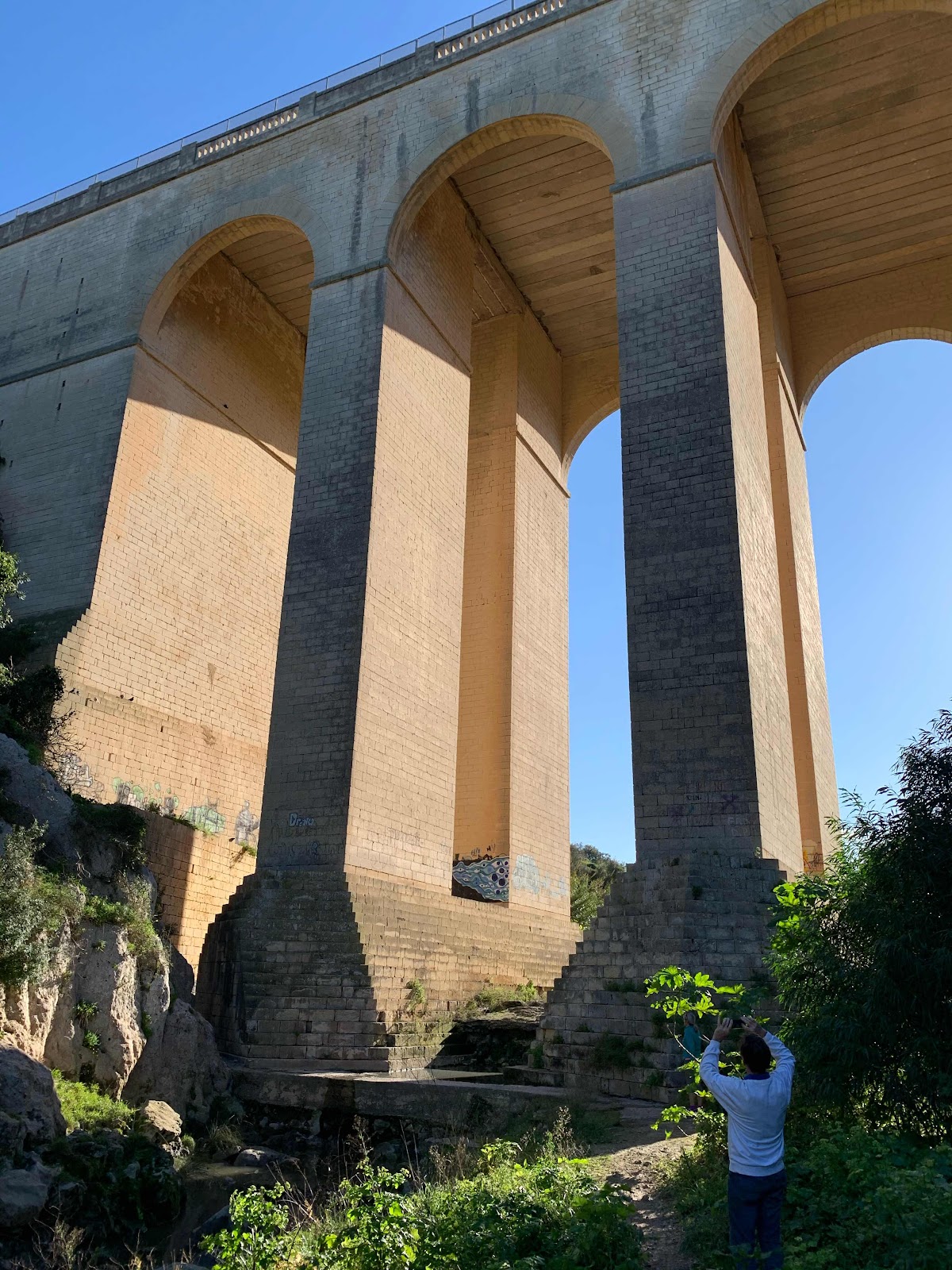 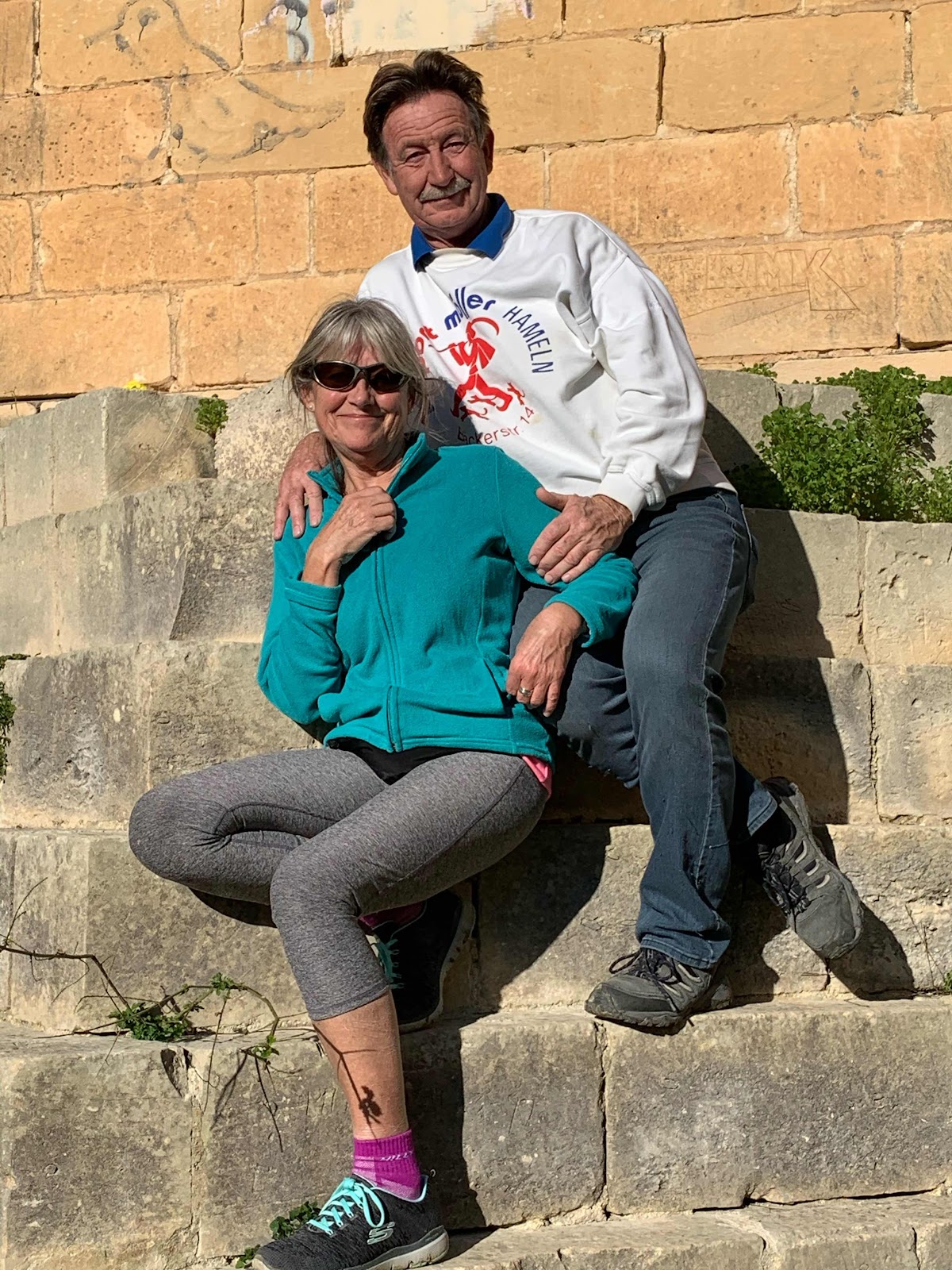 After crossing under the main road into Mosta we continued up the valley into Mosta where we stopped for an isotonic drink! 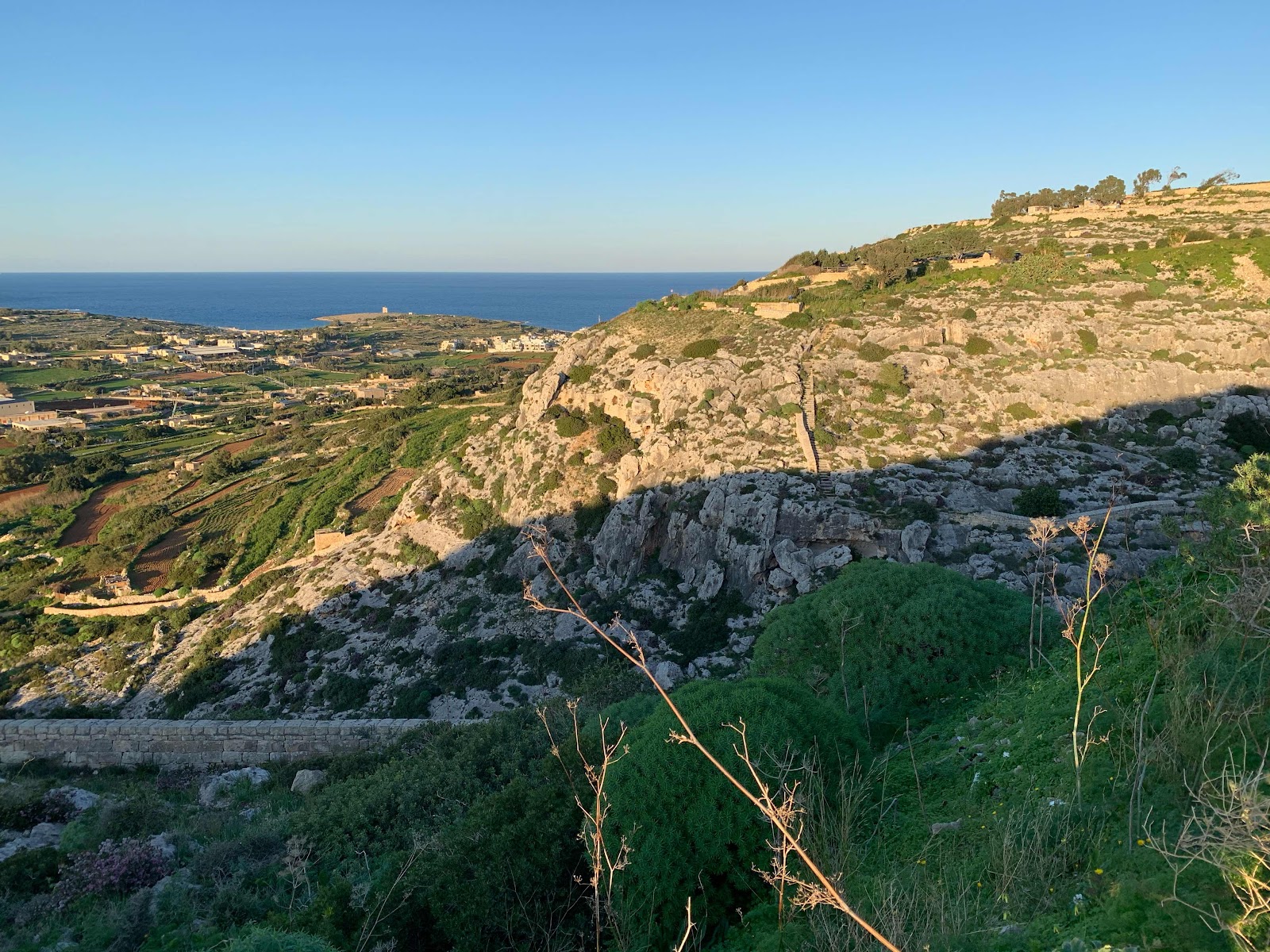 Here you can see the continuation of the defences on the other side of Mosta! 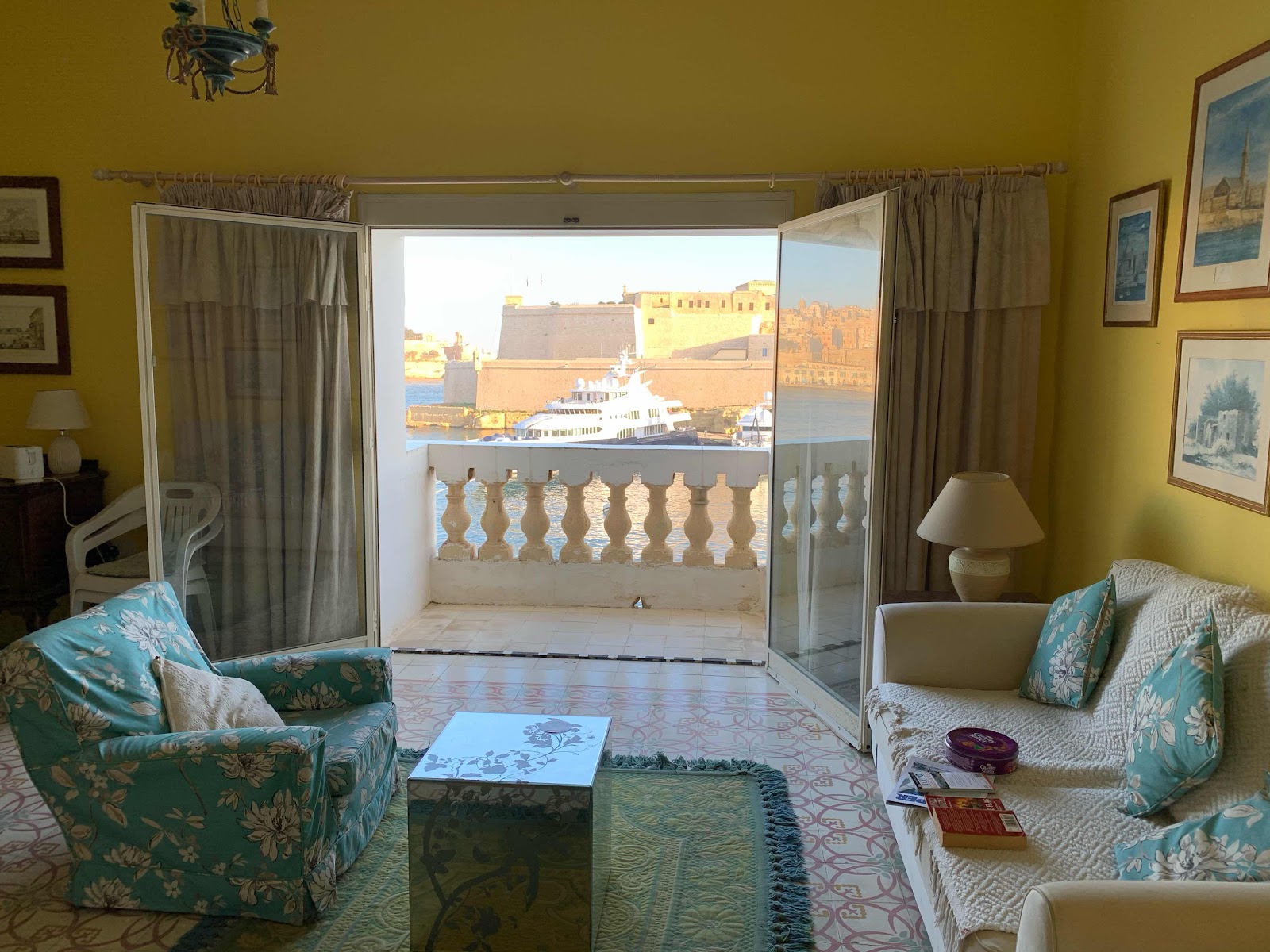 The sun has shone on all our days so far, but more often than not a very cold and strong wind has been blowing. On one day it was too strong and caused a swell in the harbour so there was no ferry. On the days where it is calmer, needless to say it is also warmer and so Alan throws open the balcony doors and we can breakfast there. 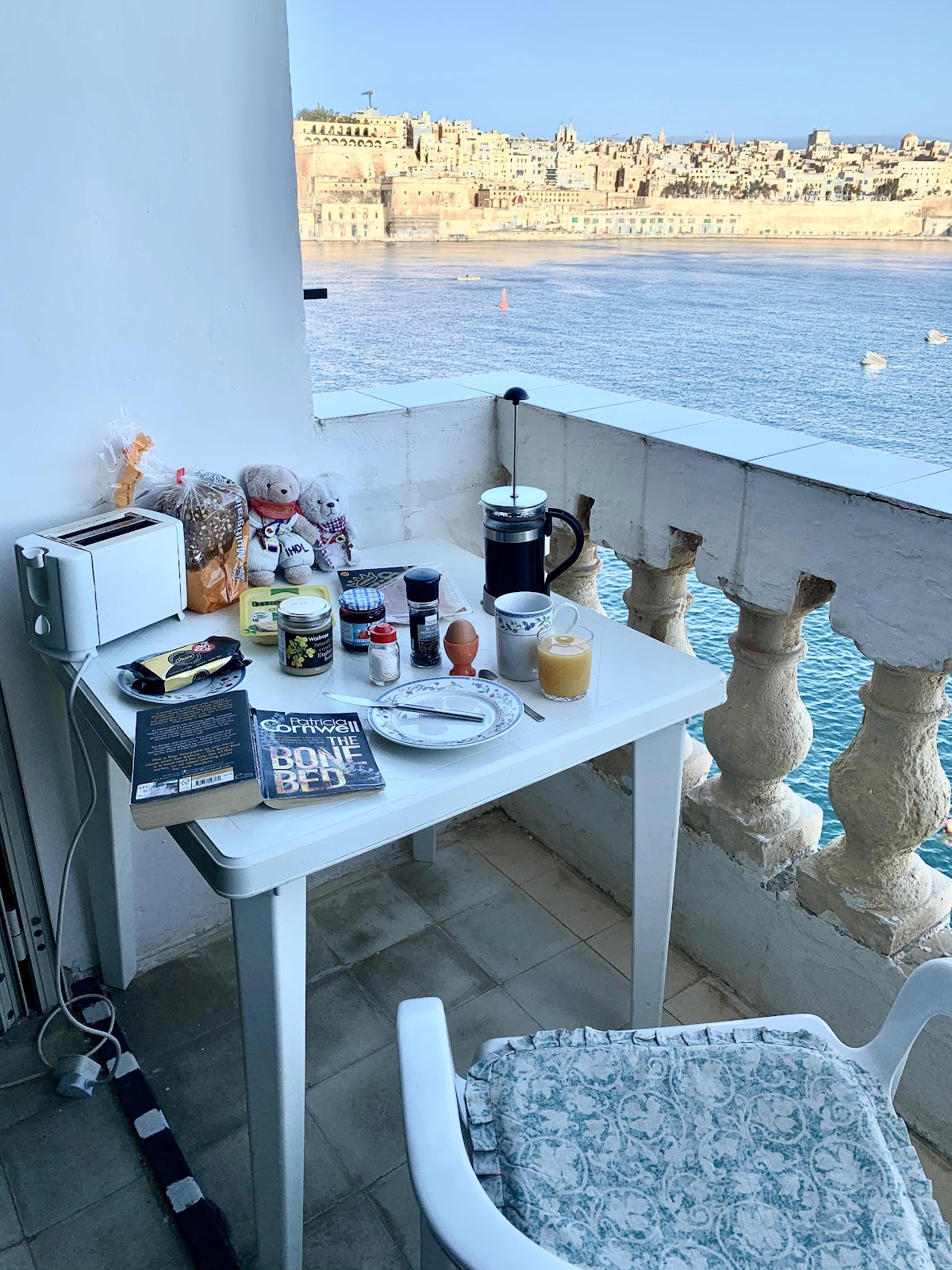 We went by bus to the Playmobil factory where our BBF complained that the motor provided with the pirate ship he had bought Vincent for Christmas only went backwards! 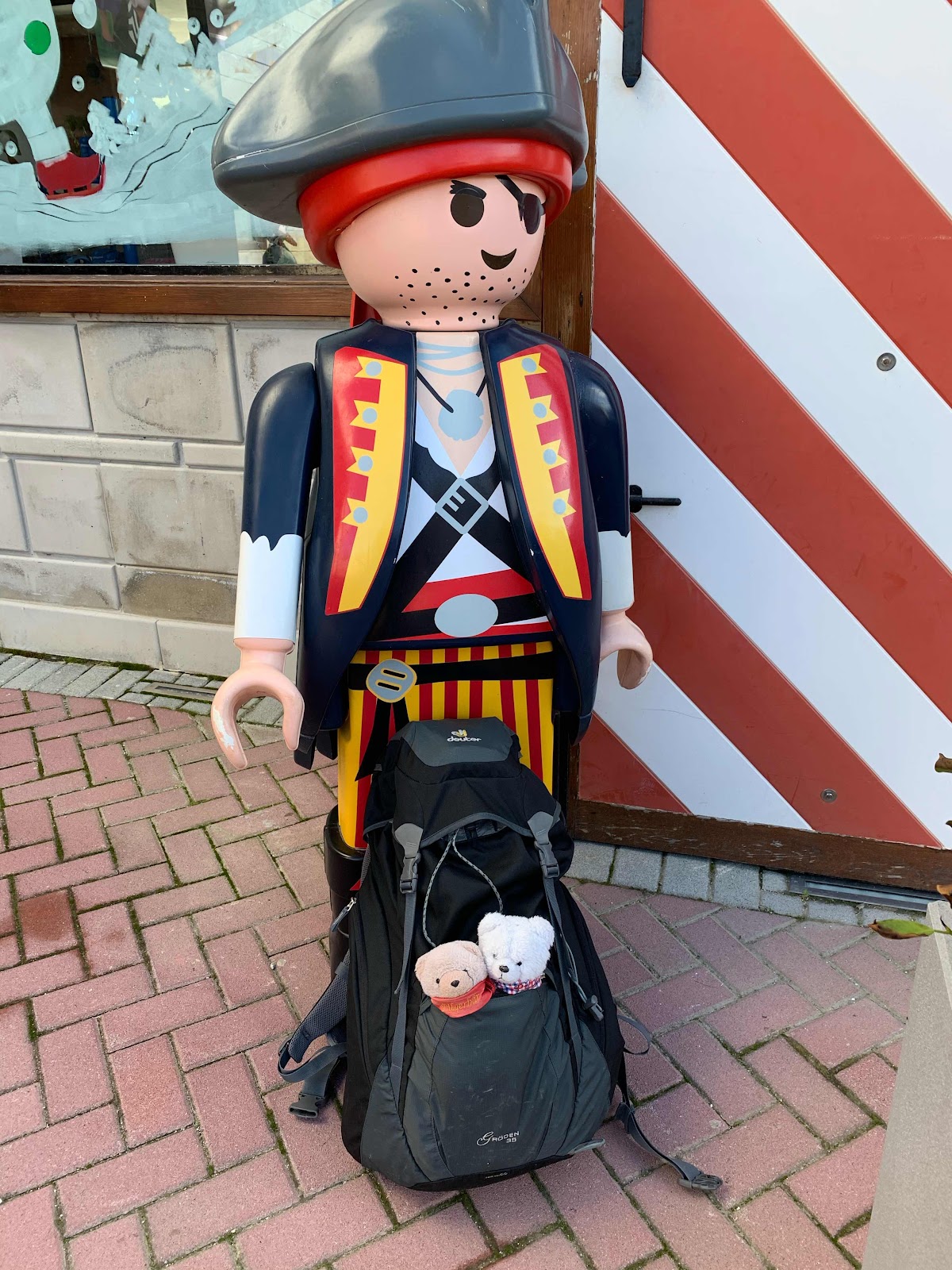 The fun park here was full of families enjoying the activities! We had coffee and then with a new motor provided free of charge we got the bus back. We got off at a shopping centre on the way back where there was a Lidl and after a quick shop got on another bus for Valletta again. All allowed for on the one ticket as it was within two hours of purchase! The ticket costs €1,50!

Generally we walk a lot. Our BBF reads a lot and so we are unwinding from the stress that Christmas brings with it, and meeting old friends that live here. Monday we are having lunch with Lorie and Martin in Qrendi and Tuesday we meet Hanna’s niece Sarah!

Posted by Alan Tyson-Carter at 13:42 No comments: