What is going on in Syria, Iraq and Palestine at the moment is making me weep. I thank God that Hanna and I have visited Syria over a three year period before the current troubles began. When we first went in 2007, we were sometimes the only tourists in town, but by the time of our last visit in 2010, Damascus in particular had profited from the tourist trade and was upping its game to attract even more. To some extent I found it sad to follow countless groups of tourists processing up Straight Street for it had altered the atmosphere since our first visit there.
When we travel, as I am not a sheep, we hire a car, I drive and Hanna always manages to find the best and most romantic of self catering accommodation. In this manner and with our limited Arabic we have toured practically the whole country, only leaving out the eastern desert area. We love ancient rubble and there is much to find going back to before the first century  but the lasting impression we have is of the friendlessness of the people wherever we went. 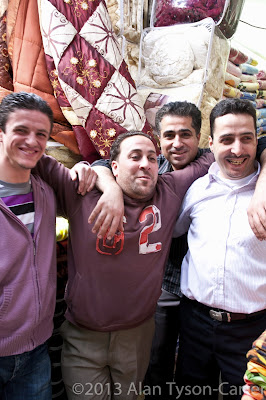 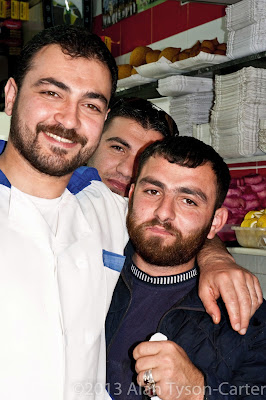 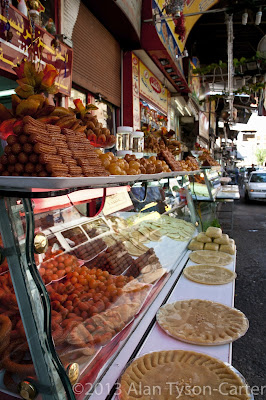 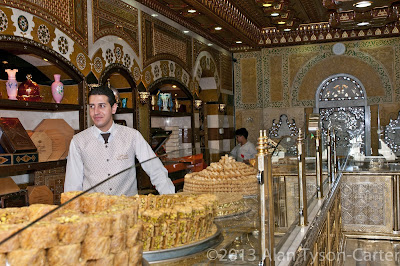 We discovered that Muslims both Shiites and Sunnis, Christian Maronites, and Orthodox Christians, all lived peacefully together. We were there once during Ramadan and later during the Orthodox Easter and took part in a fantastic procession through the Christian Quarter of Old Damascus. No matter the religion the people welcomed us with open arms and were pleased when we accepted their invitation to join them or to photograph them or their children.

The civil war in Lebanon lasted 17 years! The civil war in Syria has gone on too long already and no real thought has been given to its long term effects. Now we see ISIS establishing a Caliphat which stretches across the borders of Syria and Iraq. I have to say that I think that before the Russian invasion of Afghanistan the Sunnis, Shia, Jews and Christians in the countries in the whole of the Middle East lived in tolerance and friendship with each other for generations. I have witnessed the truth of this in Syria, Jordan and other Arab countries. So now they can't live together? So now some are saying that Sunnis and Shias have been enemies since over 1300 years? This hate is being manufactured and driven by other powers and fanatics and is a crime against humanity. Hate between these three great religions is not a product of the doctrine of these religions, for their real doctrine preaches tolerance and peace. The doctrine of hate is a product of man's making for his own devious ends and we should all do what we can to stop it spreading. I pray to God, Allah, Jehovah, call him what you will, that the countless friendly people from all religions I have met and photographed in Syria come out of this conflict safely and that one day they can go about their daily lives in peace again.

Posted by Alan Tyson-Carter at 16:28 No comments: