So how have you been since last we spoke? Here in Mönchengladbach I have swung like a sinus curve from extreme laziness and slovenliness to high industriousness and an attempt at cleanliness. The major reason for these swings is that I hate house work and would rather be doing something exciting and adventurous than vacuuming and dusting. My decluttering is still going on and I am making slow progress. Some days are more emotionally draining than others, because I find old love letters, some written by my father and others by a number of my ex'es! Then I need to go for a walk or bike ride to clear my head. 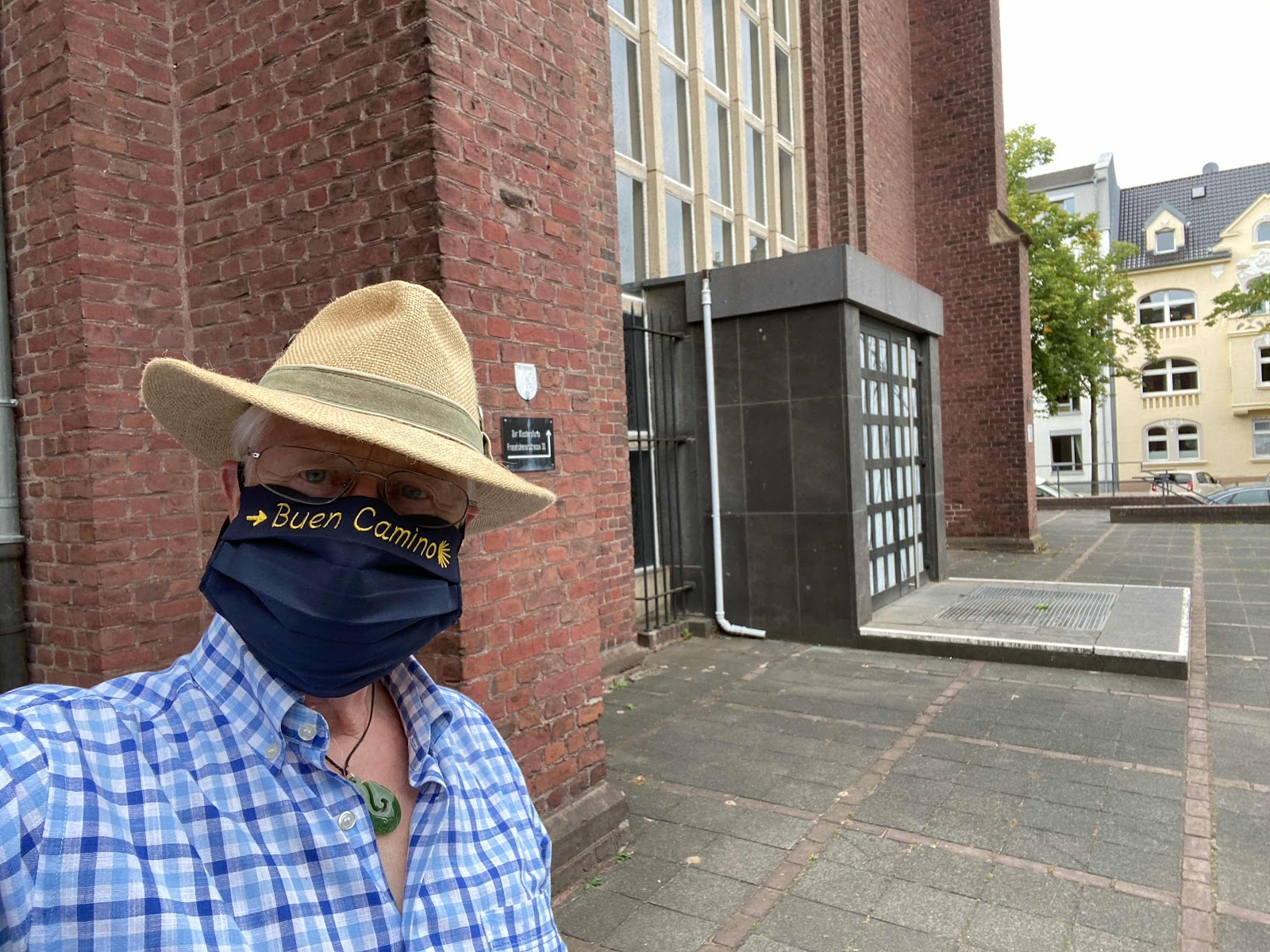 My new normal is that I no longer go shopping regularly. Those that know me well also know that I am a shopaholic. I love it and before this pandemic would go once a week to food shop and every other day window shopping in the centre of town. Thanks to the Internet it is no longer necessary. I now get my food and household stuff delivered every week. There are at least two good supermarket firms that deliver here. REWE and PICNIC. I have used the former and like their products, but they are more expensive than the latter, so I have stayed with PICNIC. Yesterday they sent me an email which said that they have delivered 10 times a total of 175 kilos of Victuals and that I have saved 20 hours of shopping time. 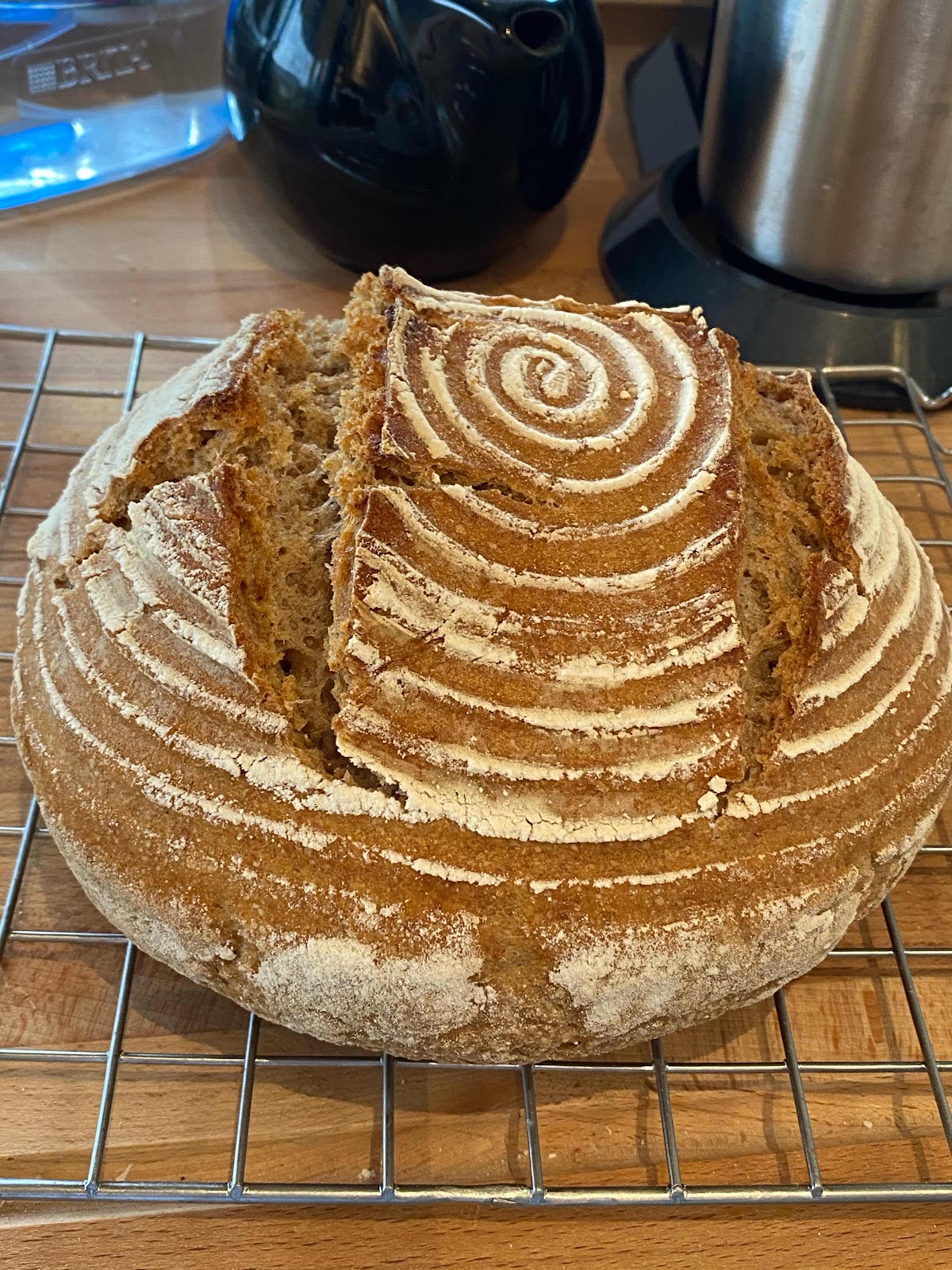 The Big Boys Toys are delivered by DHL, so I don't go without there either. Because I was not going out spending unnecessary amounts of money in coffee shops or on spontaneous purchases, I had cash available for toys. It started back in March with me using my loyalty points from a large supermarket to order a pair of nice bluetooth earphones. This led me to buy an iPod so that I could listen to even more music on my new earphones! I discovered too that the iPod Touch was as good as a Smart Phone as I could receive emails on it as well as listen to the BBC Radio. Then I decided I needed an Apple Watch! This led me to buy a new iPhone 11 Pro Max. I needed new hearing aids and have bought two really smart ones with which I can listen to the music on my iPhone, answer the telephone and listen to the TV. When listening to music or the radio I can adjust the volume or turn it off by using the little digital crown on my Apple Watch! The hearing aids Phonak Audeo M30-R have made my life more fun.  I can go anywhere and still listen to the radio or my music. When watching TV I can now go into the kitchen to do stuff and still listen to the dialogue and not miss anything. I have a need of a new computer and am thinking of now getting a Mac Book Pro, but I needed new spectacles, which I have now ordered and these are expensive so the Mac Book will have to wait a bit. Since I no longer use my car for shopping I hardly seem to use it, that I have thought of selling it, but I shall not jump to quick conclusions here as there are occasions when a motor car is useful. Especially as I shall not be getting on a train any time soon. 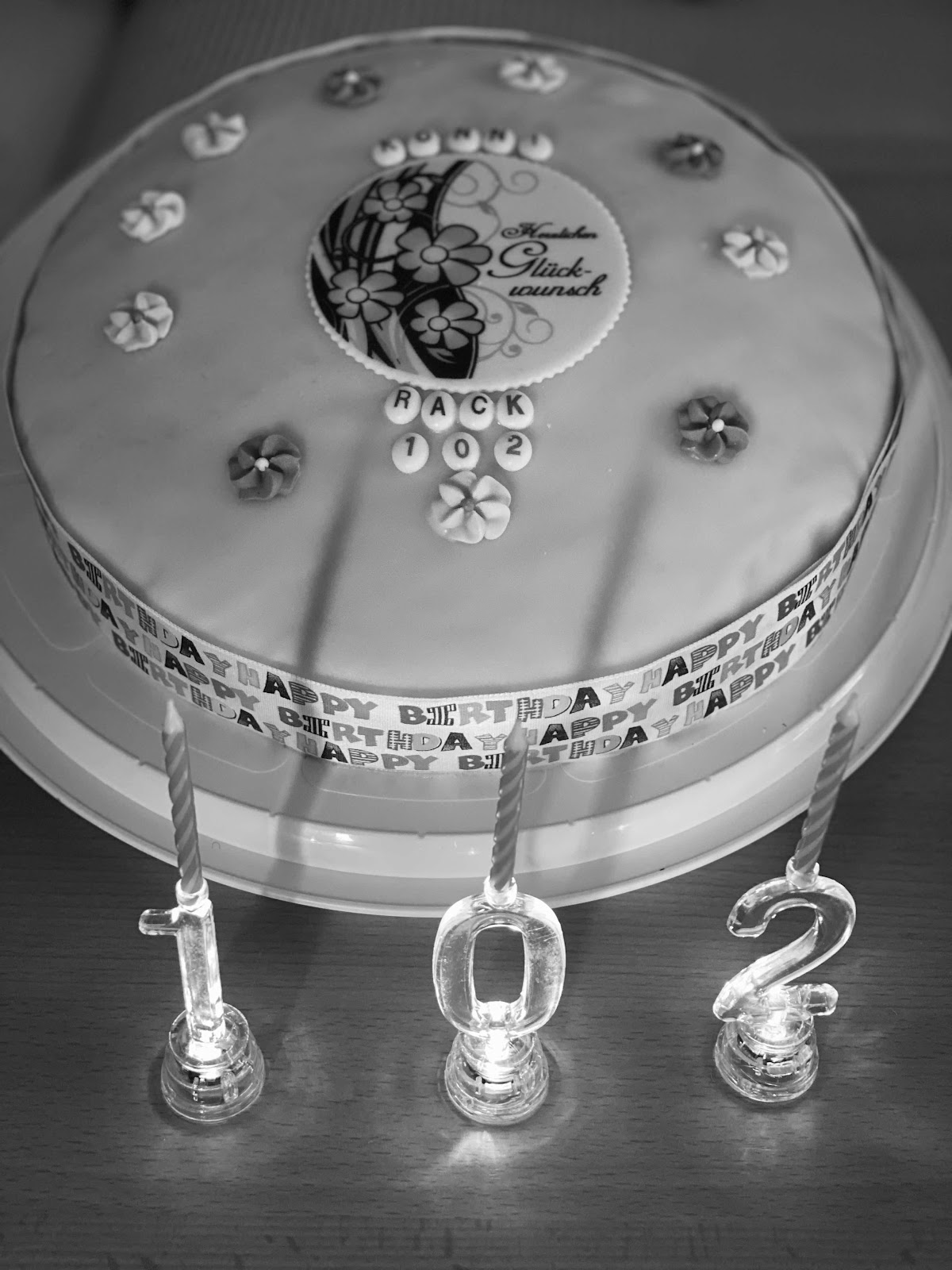 I bake weekly at least a cake which I distribute to a couple of my neighbours and my patchwork family, and every so often a sourdough loaf. I am getting quite good at the bread baking now. I started a notebook in which I record my baking recipes, especially as I am experimenting with the types of flour I use. When my neighbour had her 102nd Birthday I baked her a cake. She was delighted and since then on occasions in return for my regular Sunday cake, drops off a bottle of white wine on my doorstep.

I have met with  my good friend George/Jürgen for a coffee, on a number of occasions maintaining social distance of course. On another occasion my Camino Brother Uwe happened to be in MG for a Mega March and so we met one evening for an ice. He has a sister that sews and embroiders, so I was presented with a nice Camino facemask! I have no idea how such meetings will take place once the colder weather comes since I shall not go inside a Cafe or Restaurant!

My Anglican Church community has continued to have Zoom Services and we even started actual Services once a month. We no longer meet in the Church Hall for coffee and tea after, but go into the park opposite the Church and stand apart for a chat and a bite of my cake, baked as usual.

I have also had a Zoom chat with Brec and Sandy in Connecticut on the one day when Vodafone had a complete shut down in Mönchengladbach! I had to scrabble around until I found a friend that had a Telekom connection which was working. It was a bit hectic for awhile, but so good to see and chat with them.

I also had a less hectic Zoom Chat with Glenn and Gwen in Canada who live just outside Toronto, on a day when my Internet connection was working. 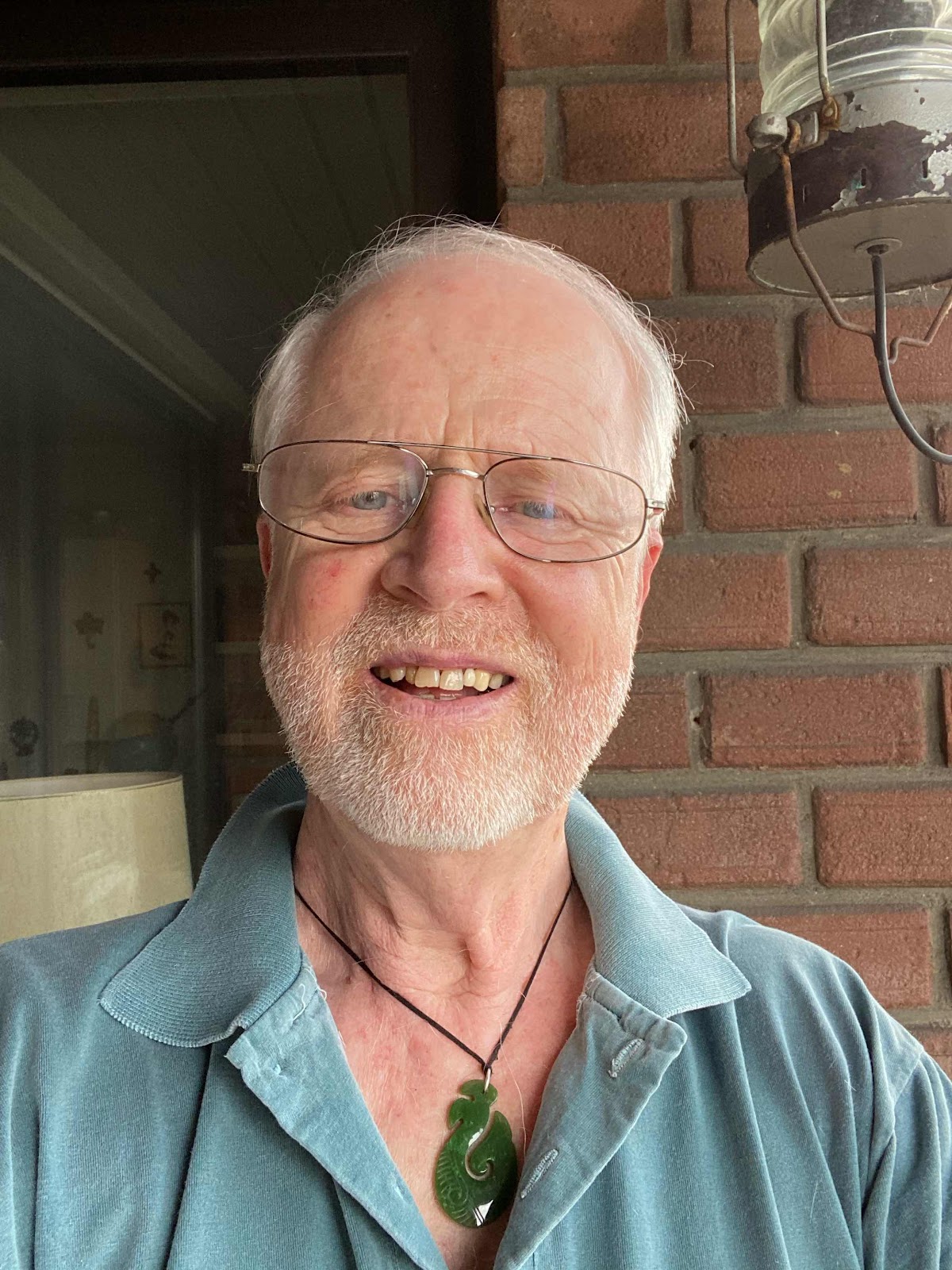 I now have cut my own hair three times in all. From the front it looks OK, it's just the back which is iffy!

2020 looks like being the first year since 1983 that I have not been sailing. Since 2009 I have been without a boat to call my own, but I have somehow always managed to get out on the water in some form of sailing vessel. When the pandemic is over I shall attempt to get the Baltic Four together for a sail on RAGNA R. 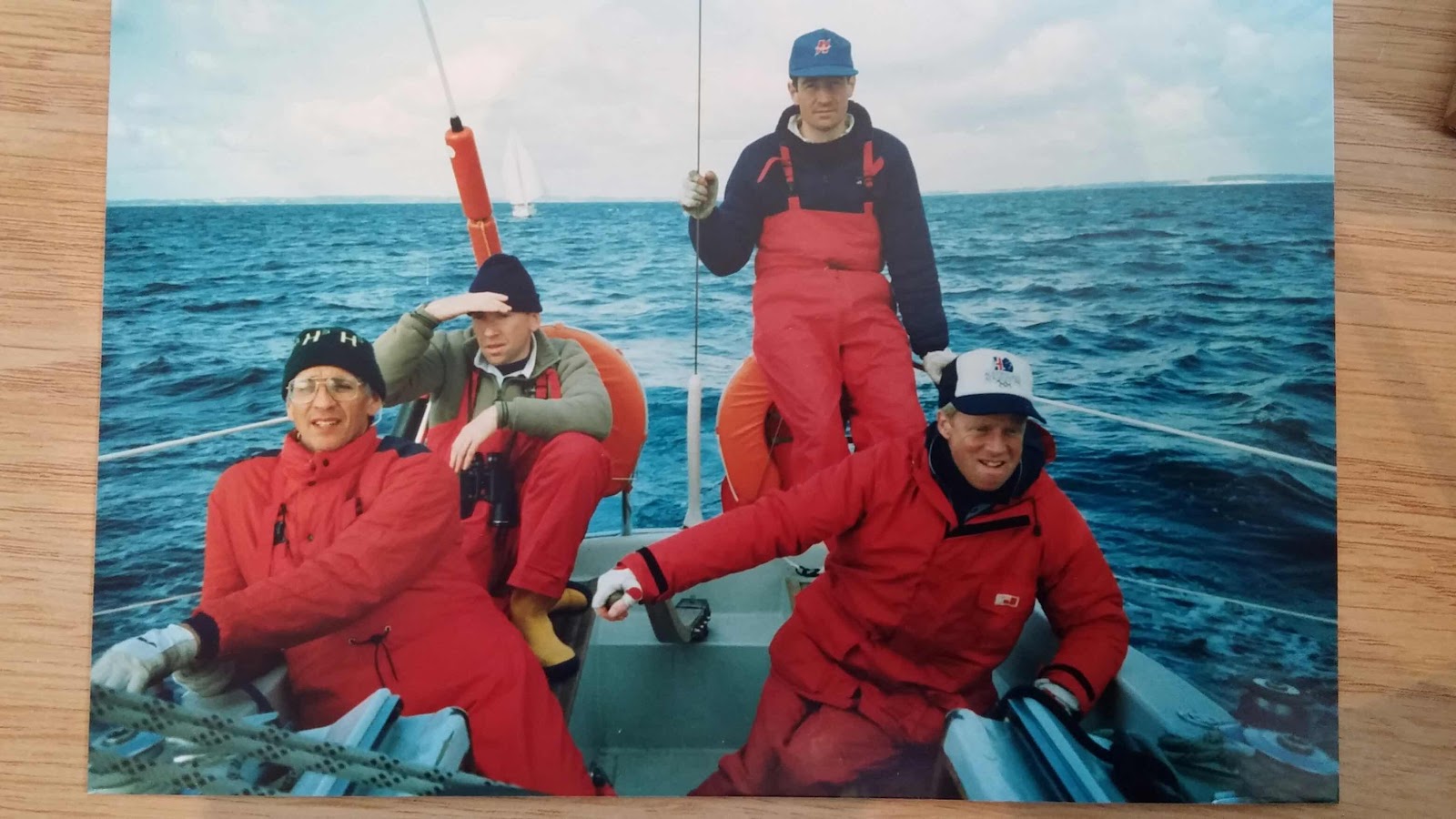 The Baltic Four some time ago in the 80s.

There will be no annual get together of the Nienburg Crew either which is sad. We have met each year since 1992!

At the beginning of the year I introduced a Vice Commodore of the Ocean Cruising Club to member of the German equivalent, Trans-Ocean at the Düsseldorf BOOT and we discussed cooperation between the clubs and the possibility of the OCC having a stand at the BOOT 21. BOOT 21 will take place, but I have had to inform them all that I can no longer participate unless there is a safe vaccine for me! I shall help them if they decide to have a stand from my socially distanced laptop, but more I cannot do.

In another lifetime and when I was super fit and much much younger, I had a serious bout of viral pneumonia and it was touch and go then. After REHAB it still took over three months for me to regain the full capacity of my lungs! Consequently I am doubly cautious now.

It pains me to see the many people around the world who seem to deny the seriousness of COVID-19 or the need to wear masks in public places. One or two I know personally justify their actions by saying they are lateral thinkers, implying that they are the only ones with the right answer. COVID-19 is still so new and the medical and scientific community are still learning about how it is transmitted and what the true consequences are. Younger people are being adversely affected, even if they only have a mild form and recover they are showing long term medical problems and complications.

I remarked in my last blog that what the world needed now was strong leadership for only if all countries pull together will we overcome this pandemic. I pray that the upcoming US election will bring a favourable result and that America can then take up its proper leadership role again.

My Eye Doctor when I was having my check up said to me that once upon a time all Psychiatric Hospitals used to be painted white. Now there is only one left and it is on Pennsylvania Avenue!!

Think about it, in the meantime stay negative!

Posted by Alan Tyson-Carter at 16:56 No comments: