A gentle ride to Münster!

Our two old codgers slept well and deeply last night. Chris complained that he never sleeps this long. Our BBF reminded him that they were two OAP riding bicycles in hot sunny weather, they were bound to need lots of sleep!
After a really good breakfast in the Park Hotel they set off and stopped after only a few hundred metres! 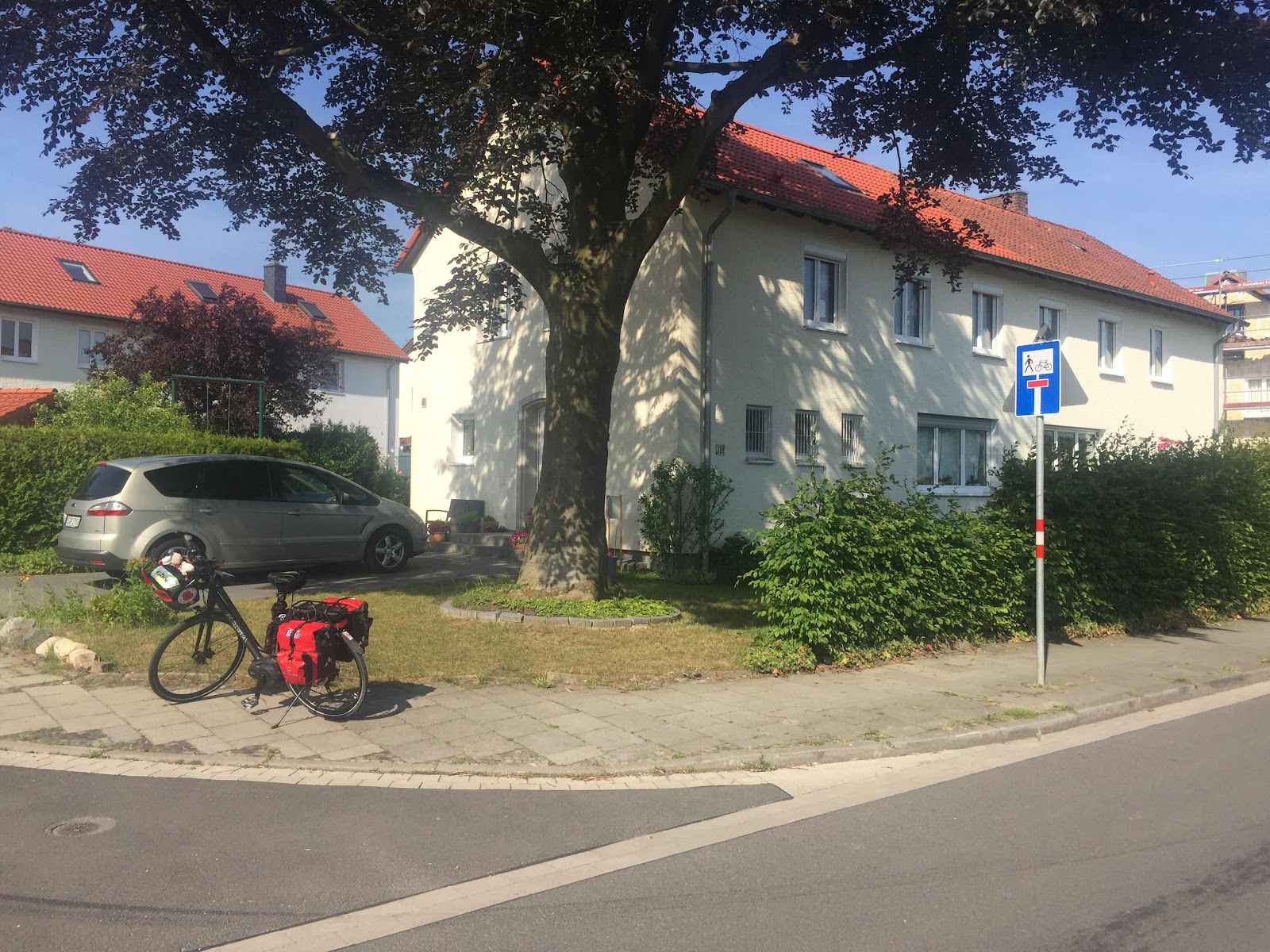 On the corner of an estate which in the 70‘s was called, “Little Mayfair” was where our BBF lived with his first wife and family. He confessed to being very happy here. The marriage all went wrong in his next posting! Naturally it had changed somewhat, he could not park his car on a drive, but had to leave it on the street. 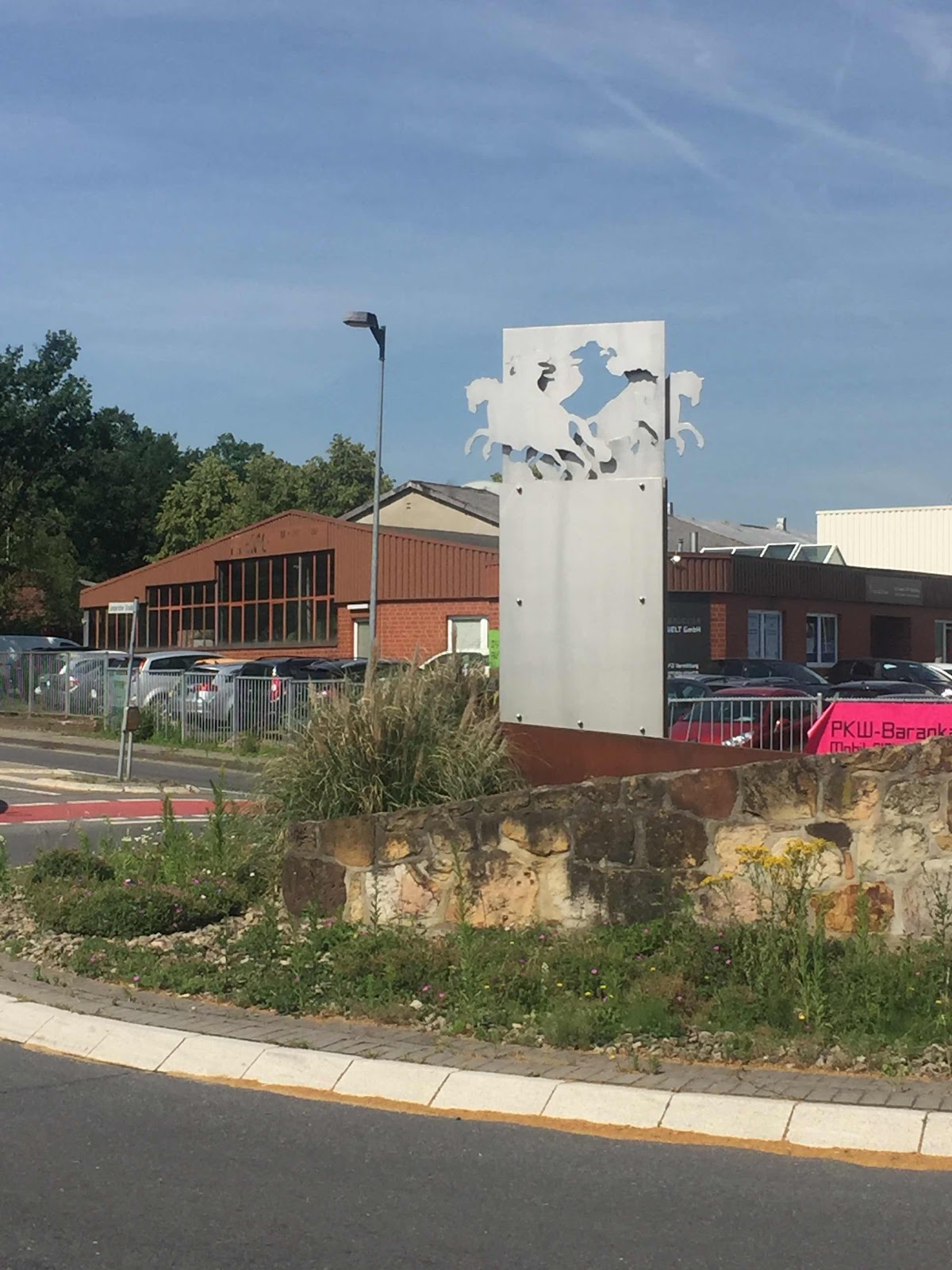 It was another lovely sunny day with clear blue skies as we made our way out of Osnabrück! We took it easy, there was also a hill to get over before it became flat! In fact the hill was not as bad as was first thought, but as usual for us, we enjoyed the thrill of the downhill section! 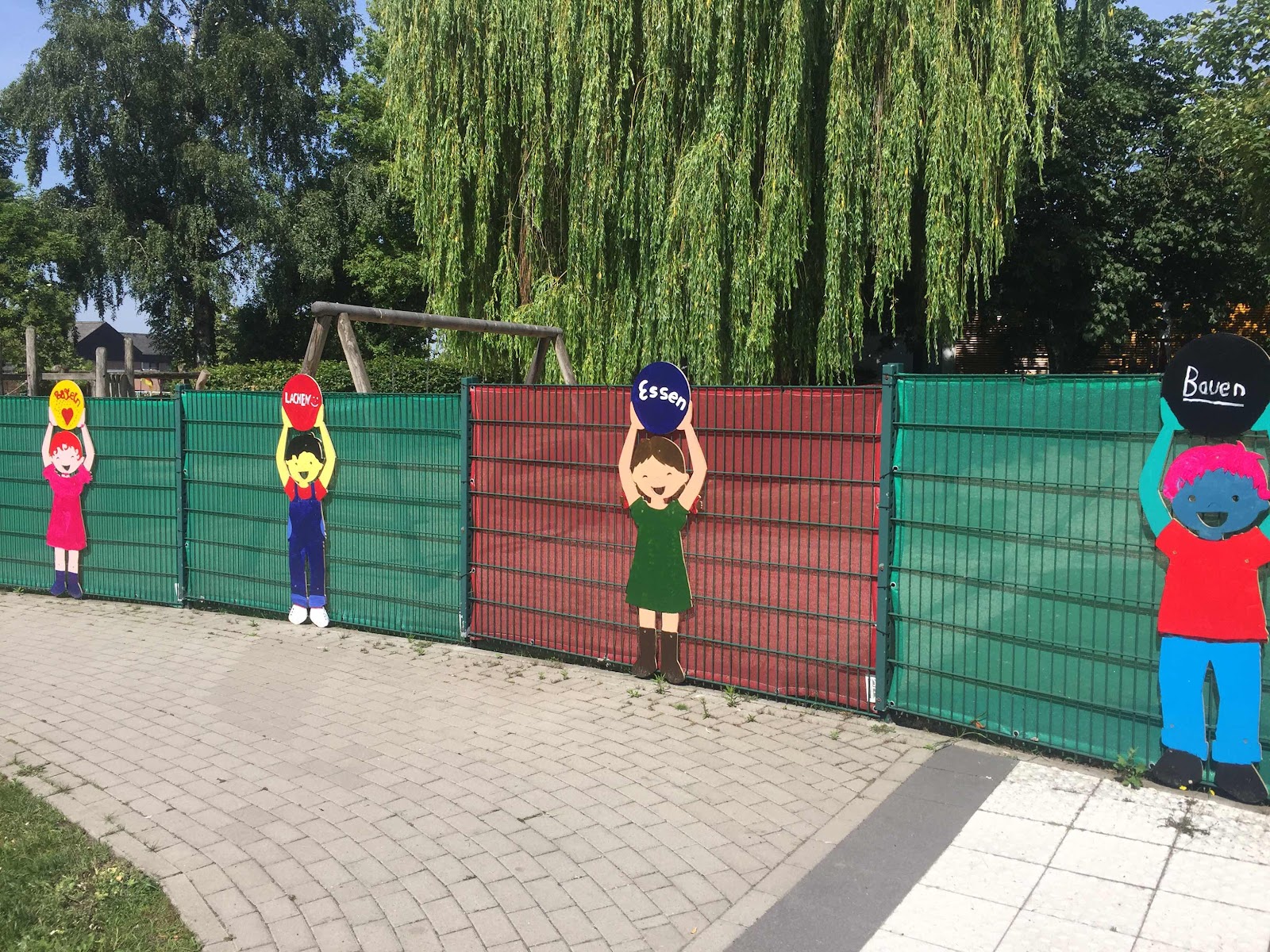 This was at the end of the thrill and was also the start of a little town where we now stopped at an Ice Café for something nice to eat and drink. 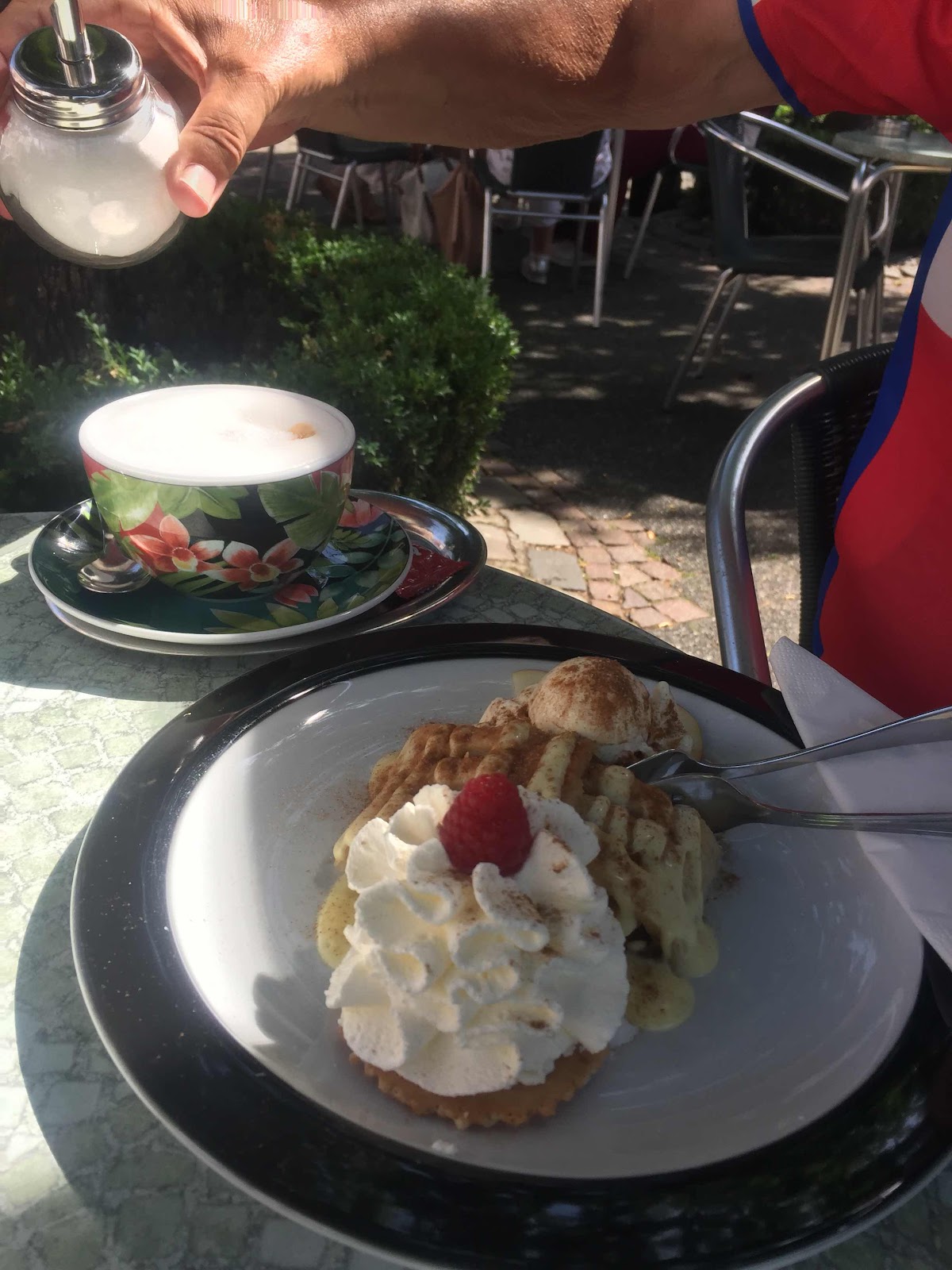 Chris had a Cafe Latte with an Apfelstrudel, 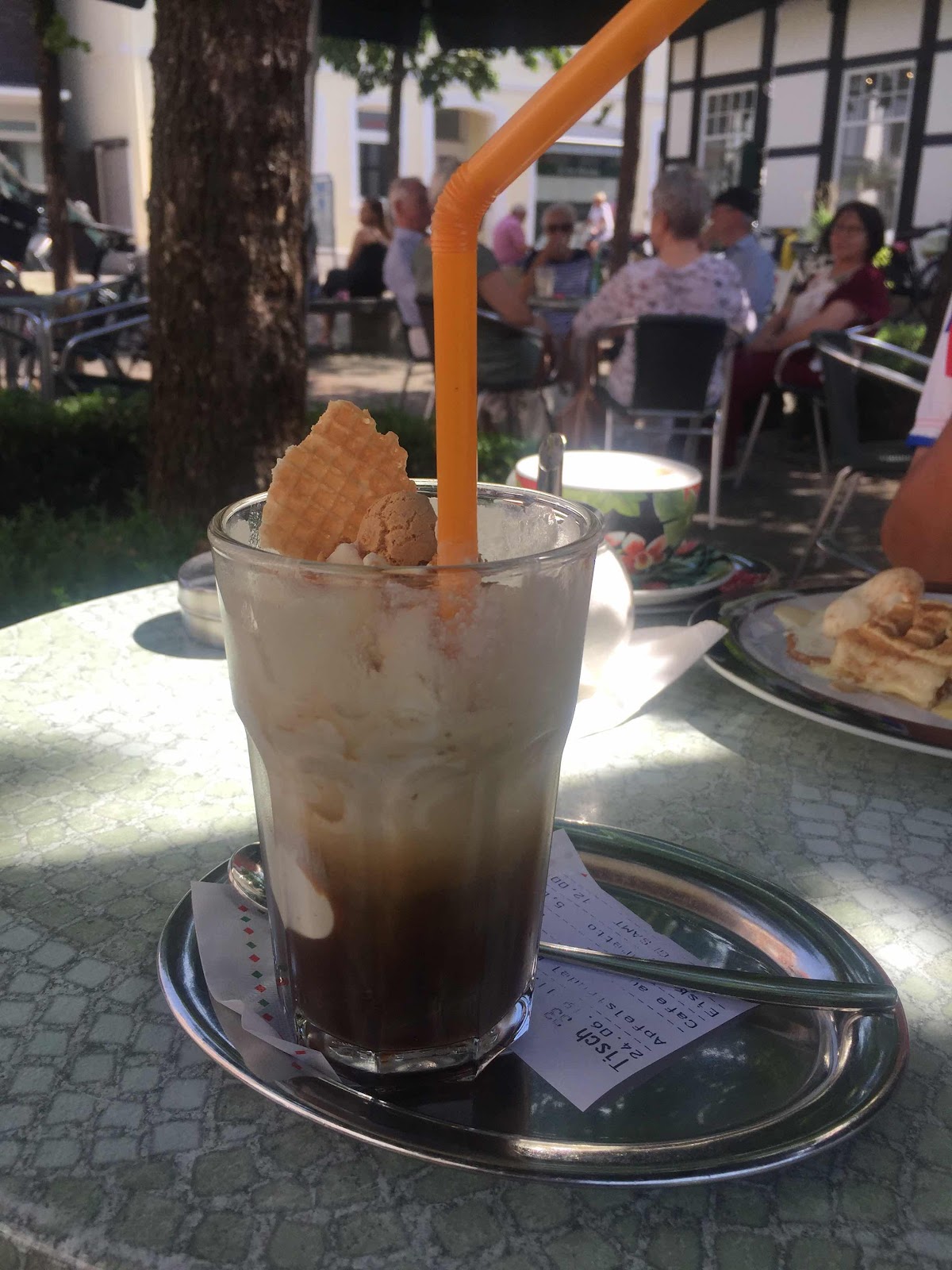 while Alan had an ice café with Amaretto! He almost forgot to take the photo when it came and got stuck straight in. 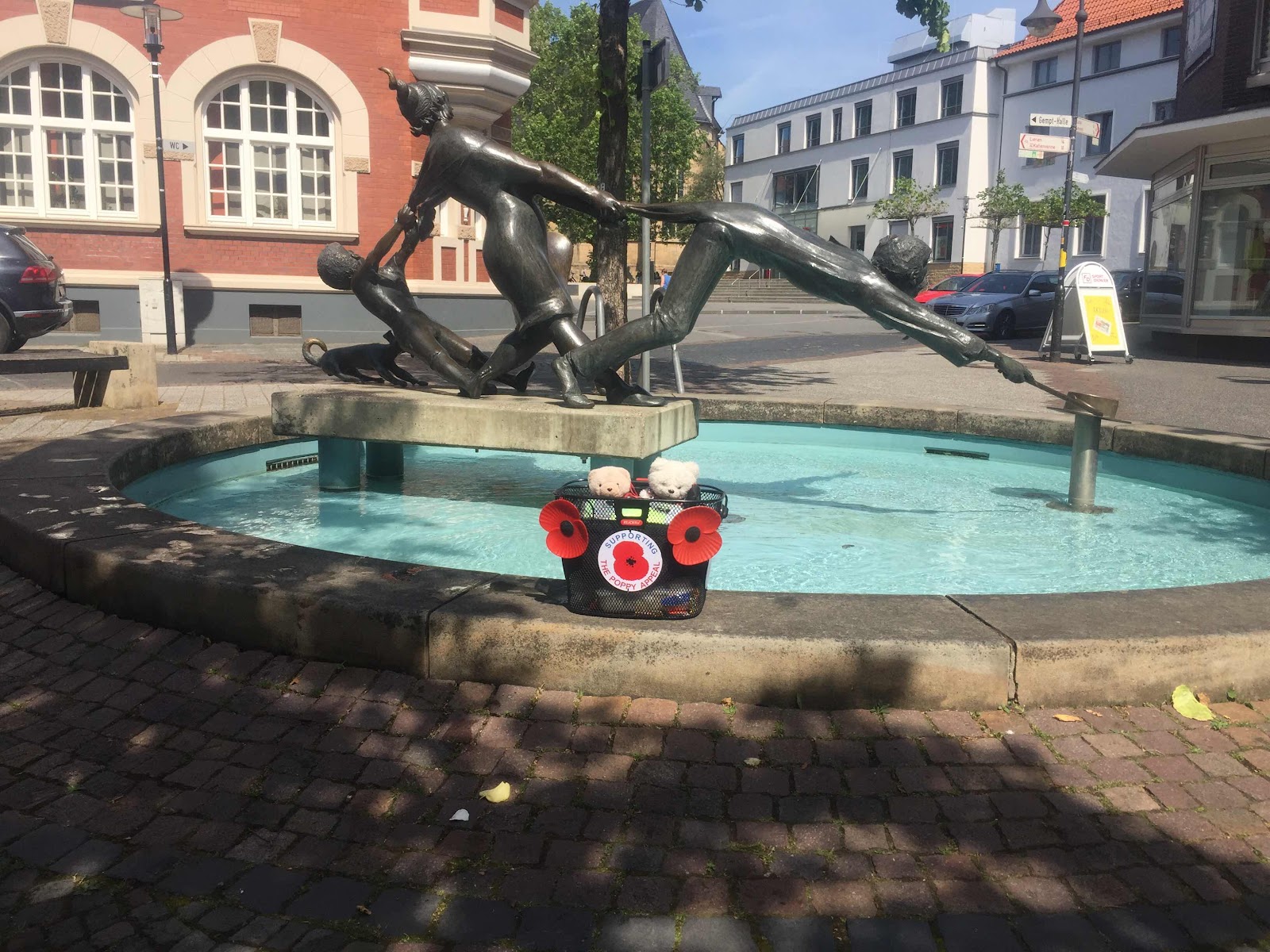 There was an interesting sculpture nearby. A man was trying to retreeve his hat with a walking stick, while a woman hung on to his coat tails, a child held on to the woman and a dog was tugging at the child! 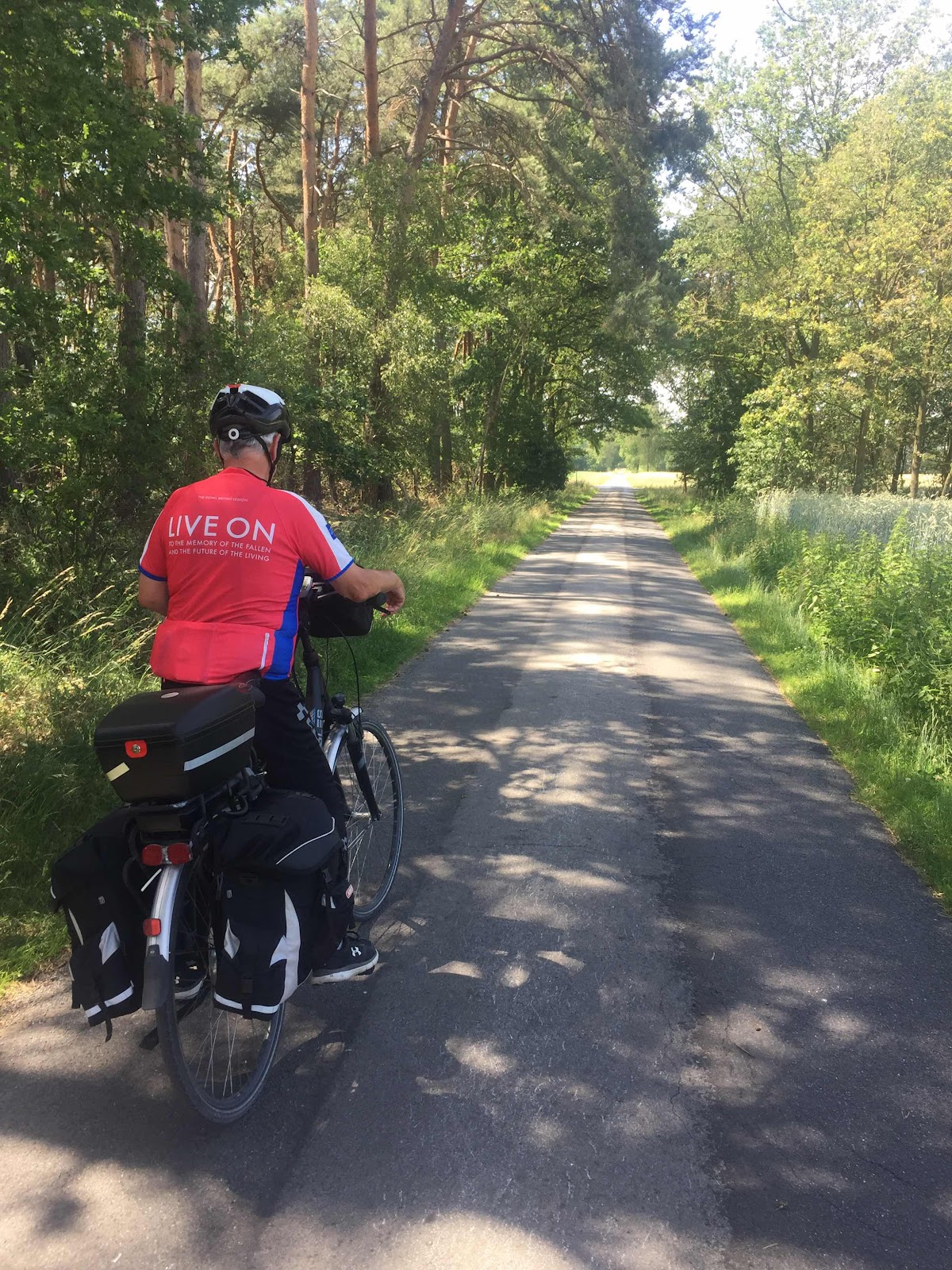 The route took us on country lanes or along cycle paths beside minor roads, and now the hill was behind us all flat! 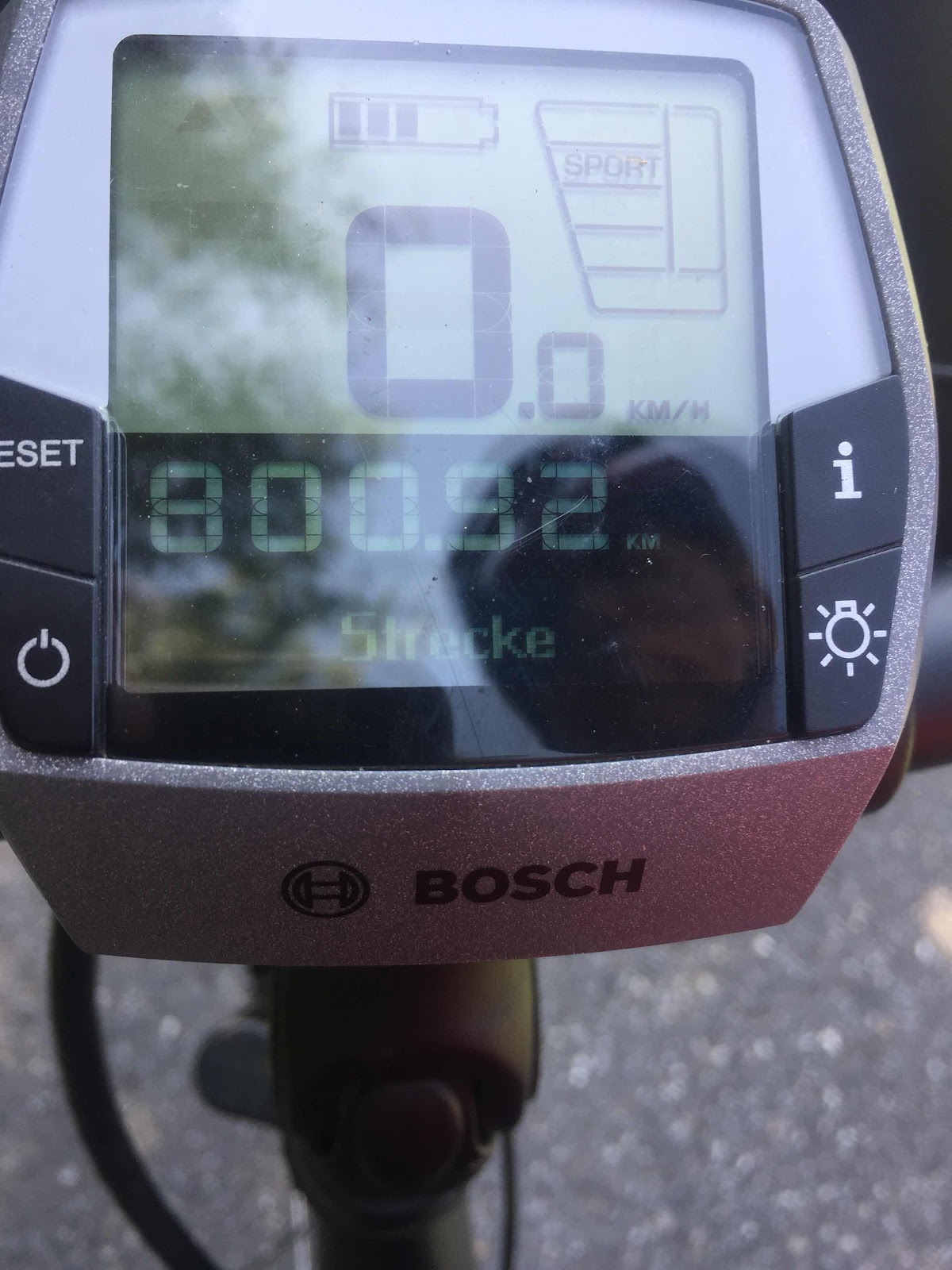 Chris was able to record his 800 kilometres since starting today too! 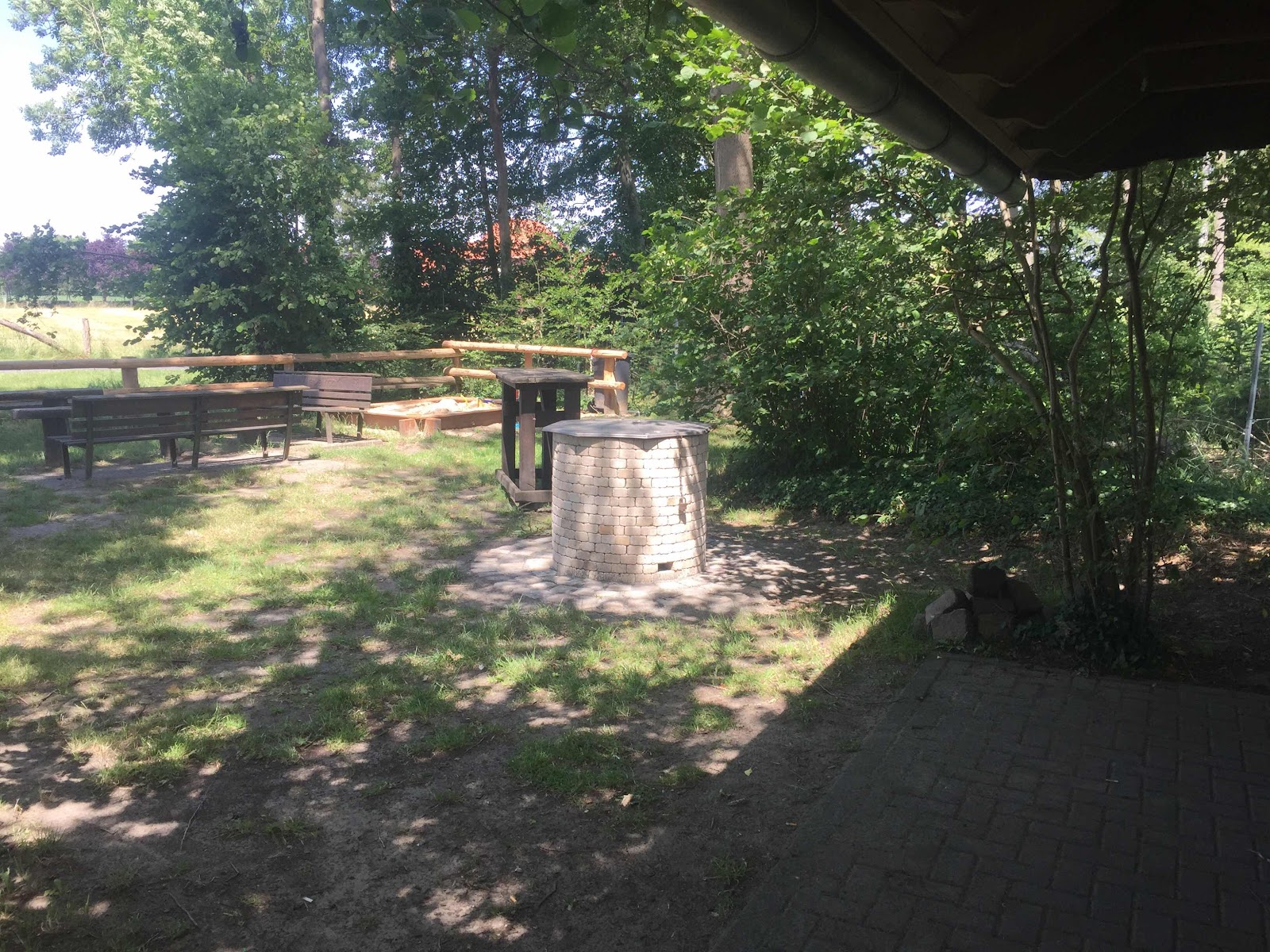 We had another rest stop to drink at a nice barbecue and play area between two small hamlets! 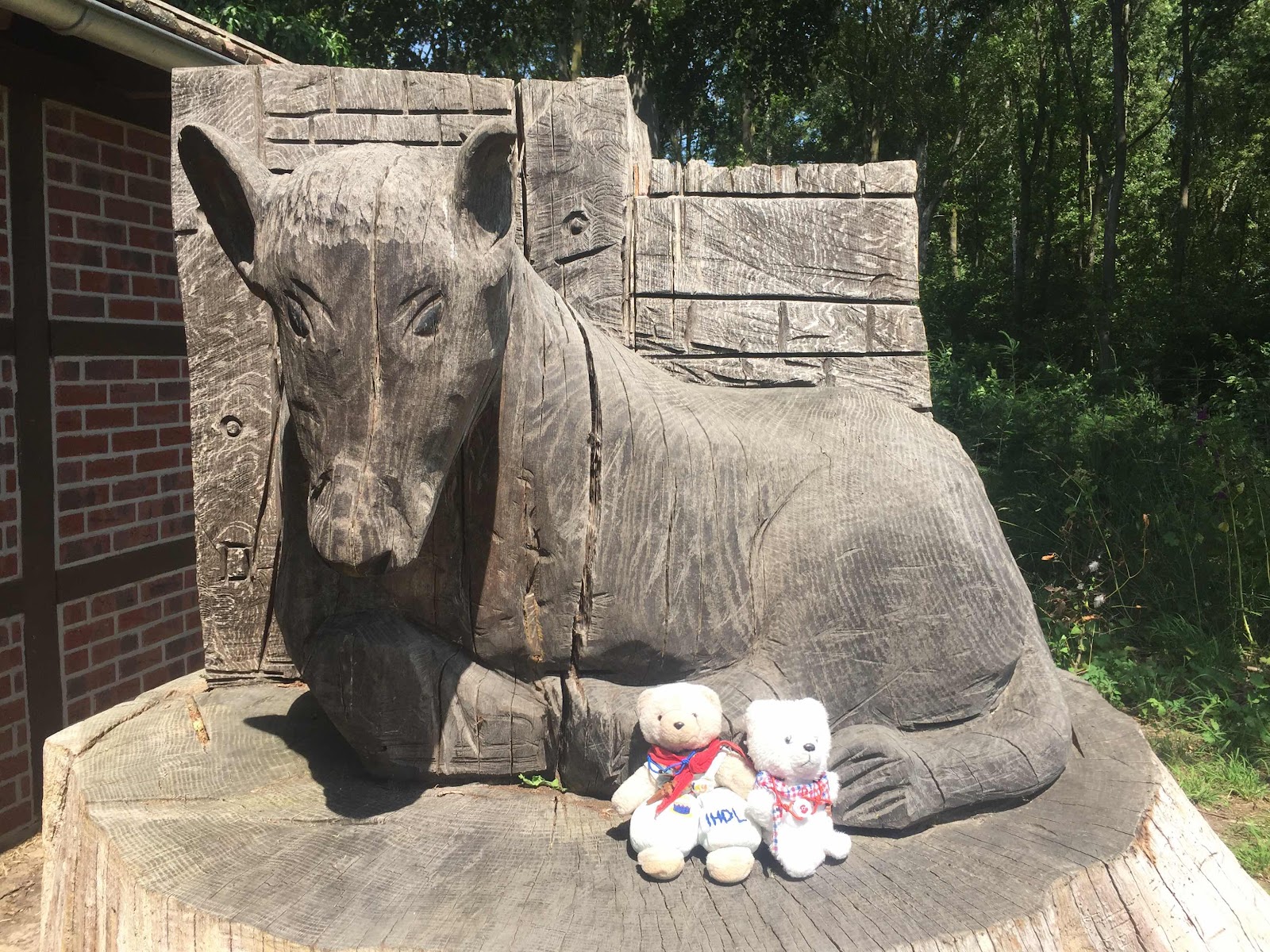 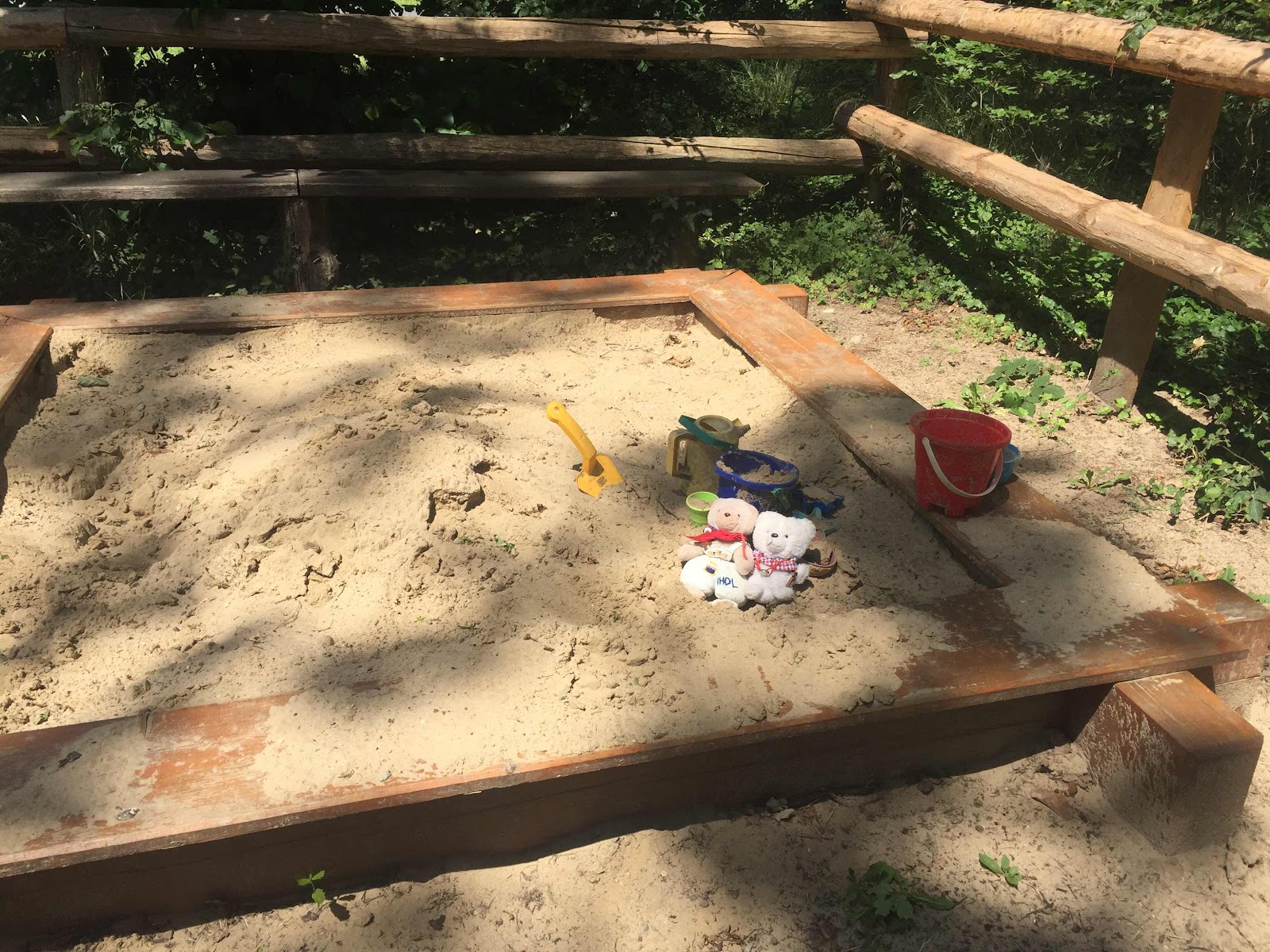 It was great as we were able to play in the sandpit while the grownups talked about what a great day it was. Our BBF said that German was a beautiful country and how he felt it was great to be alive! 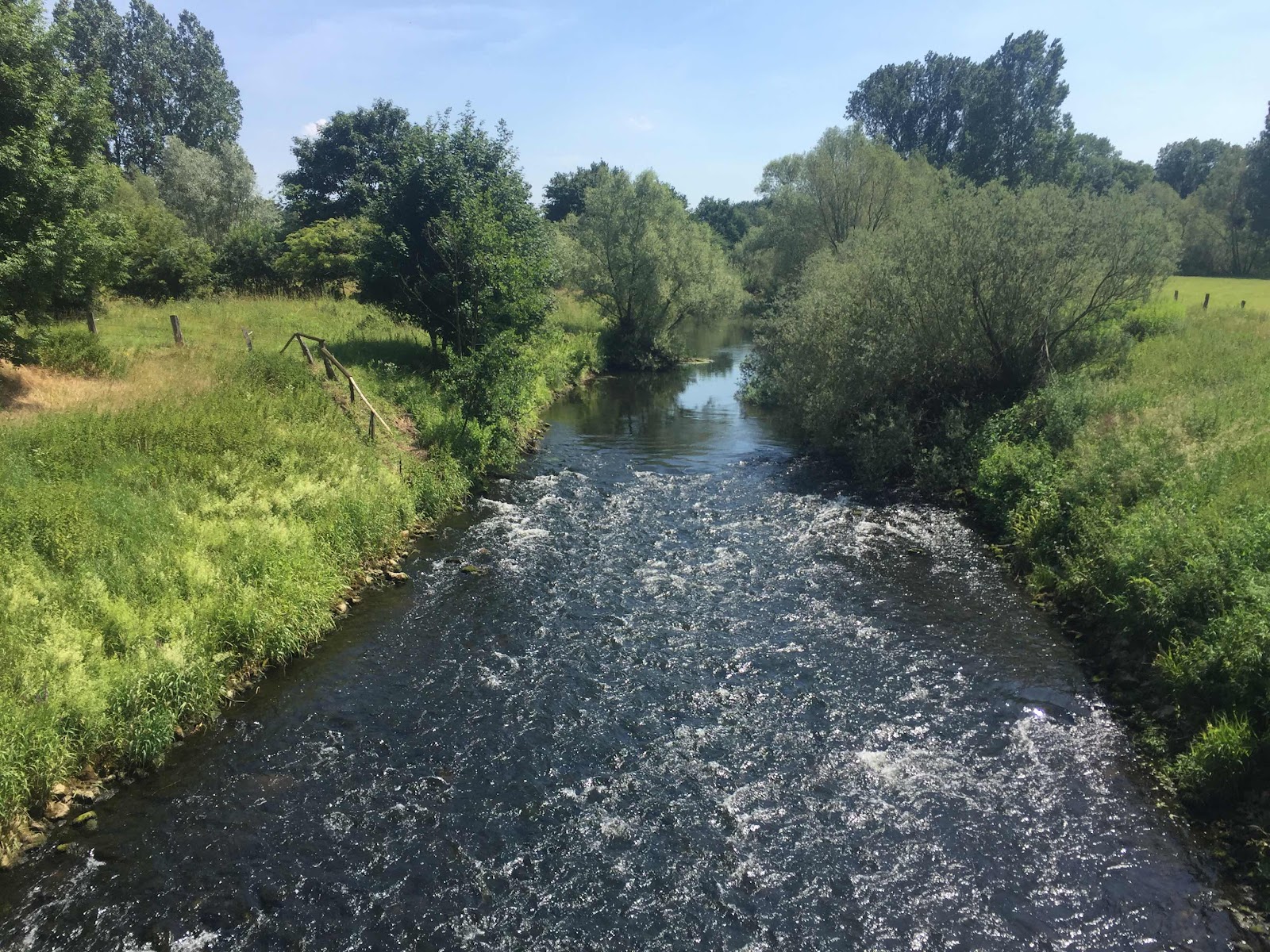 We Bears were totally surprised when we came to a bridge which crossed the Ems River! 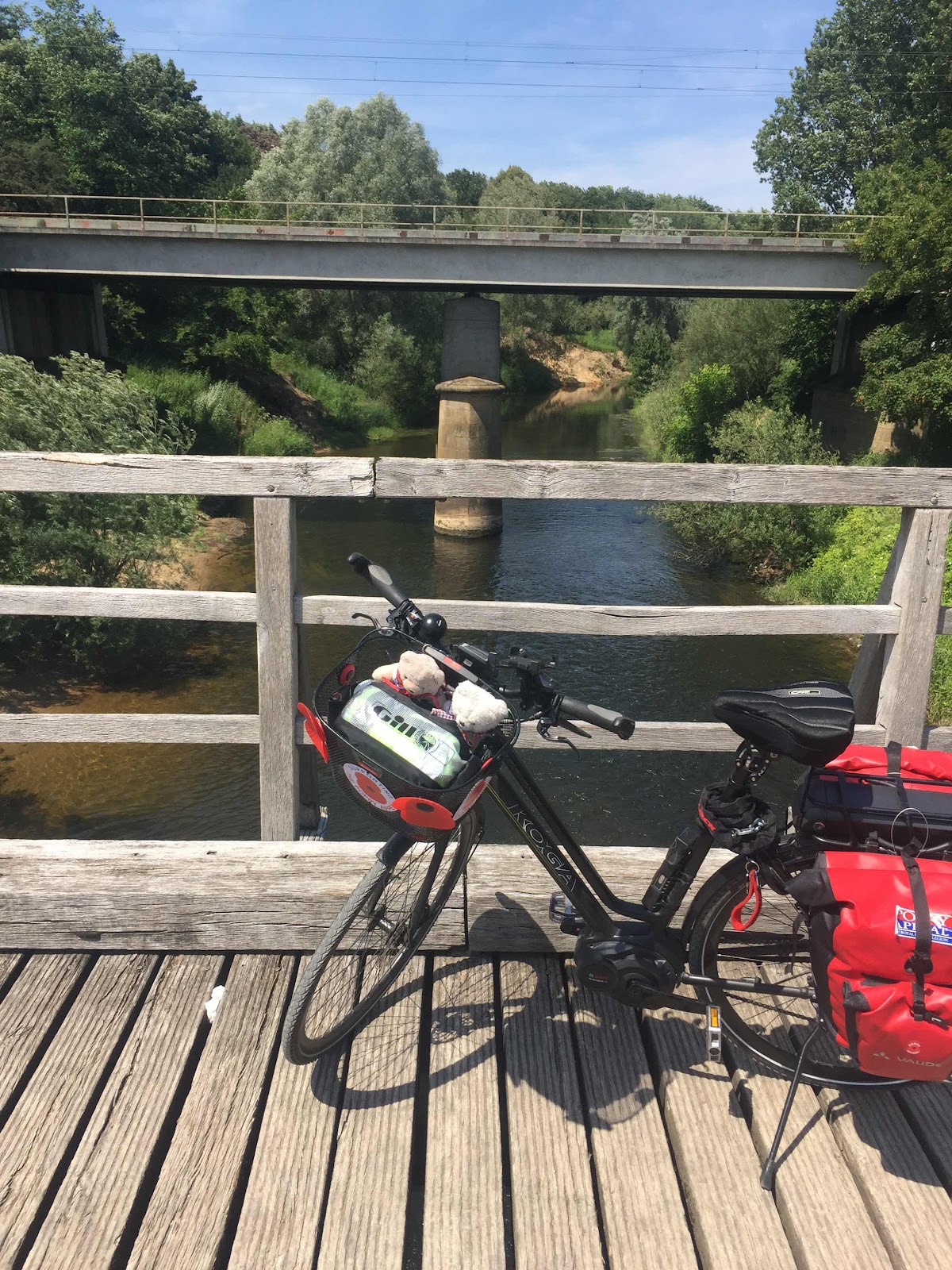 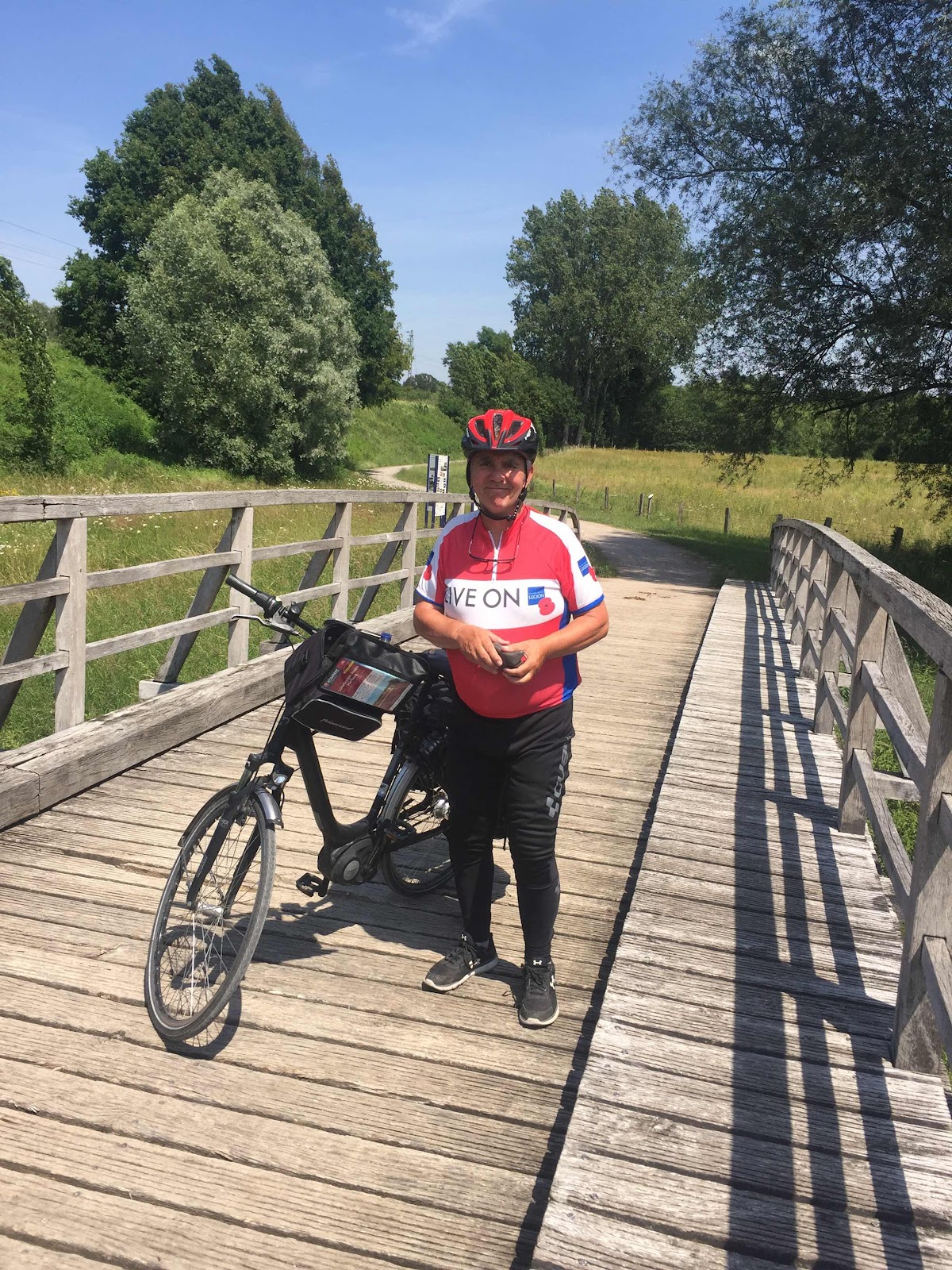 We had been to its source and now we crossed paths again.
The last section took us through woodland and on forest tracks. Chris got phone call from Roy Johnson, the RBL District of Germany chairman who was enquiring when we expected to arrive. Ten minutes was not the answer he wanted to hear, so we had a pause in the shade to allow him to get there.
When we set off again the barracks was on our left and Chris now noticed that the District chairman was behind him in his car, so he indicated to Alan who was leading to cycle on by the turning to the main gate! Needless to say Roy shouted and gesticulated that we should turn round!! 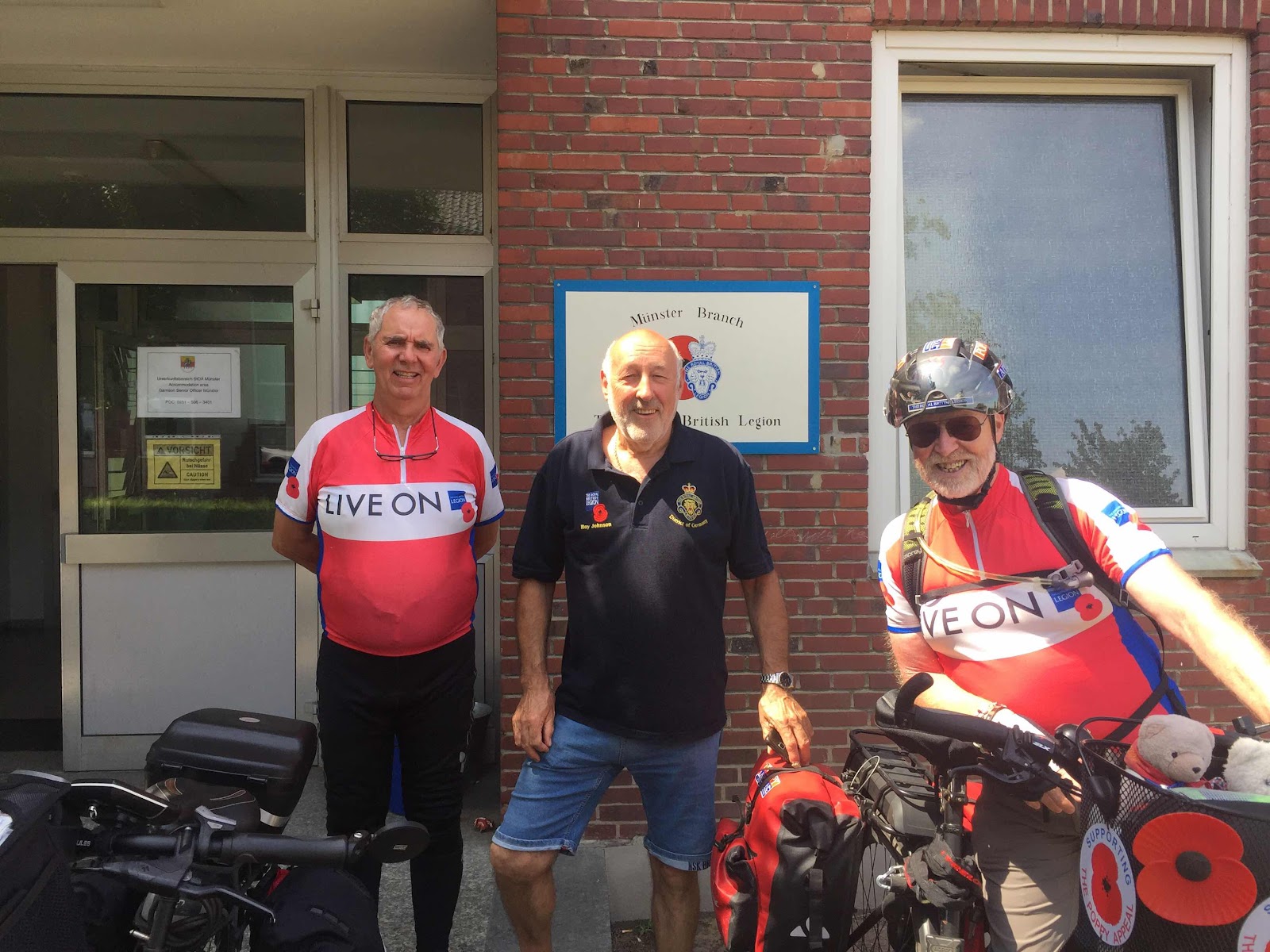 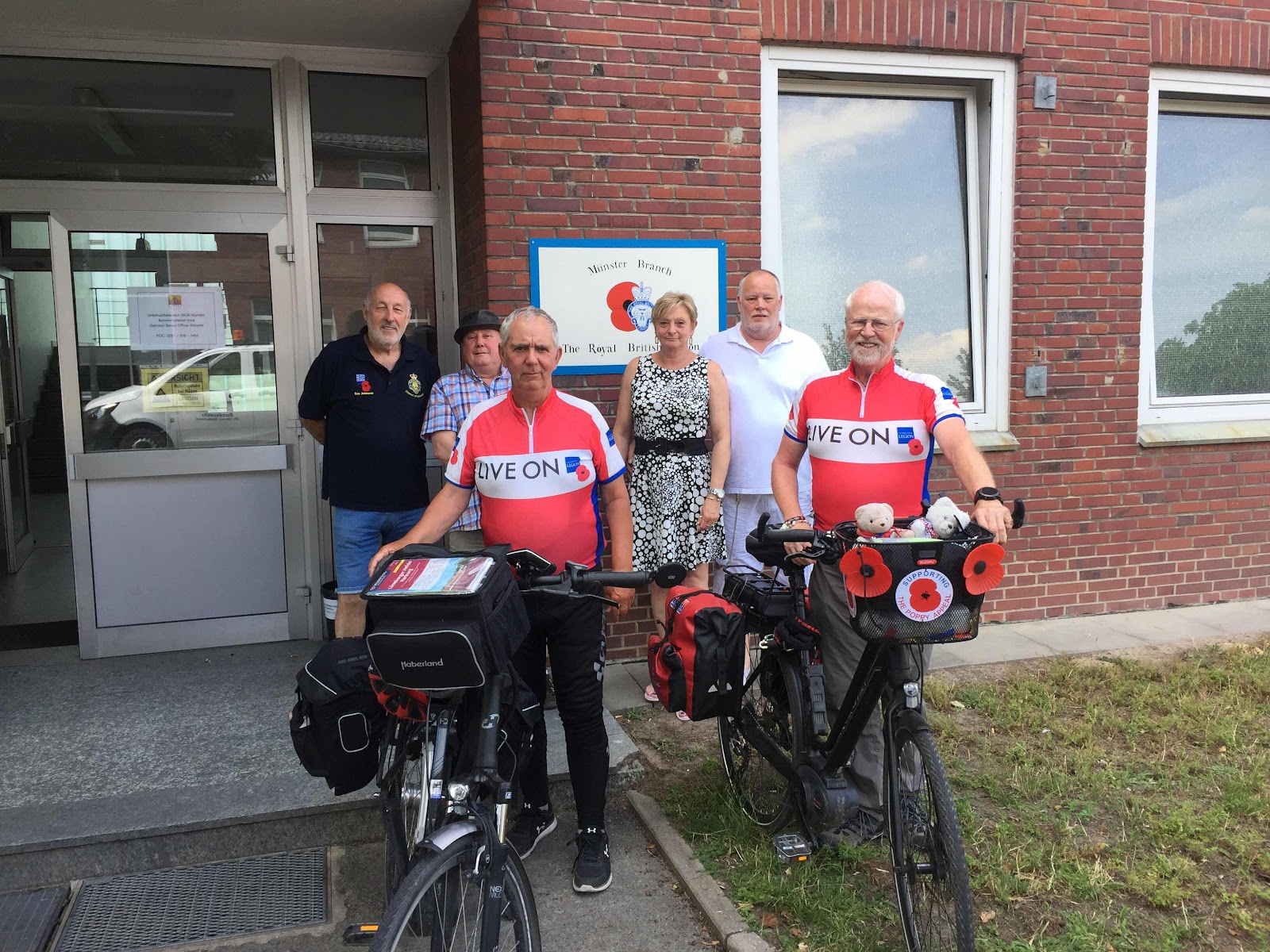 The welcoming party consisted of
Roy Johnson the District Chairman
John Davis the Local Branch Chairman
Ruth Myers the Entertainment sub committee chairwoman and her husband Steve Myers.
Isotonic drinks were handed round and our two just chilled. We are accommodated in a Bundeswehr barrack Block for tonight, for which our old codgers are extremely grateful!
It is planned to go out for a meal with some members of the local branch, which we know our humans are looking forward to!
Tomorrow we make for Dortmund!
Posted by Alan Tyson-Carter at 19:26