Our day started well in that our two humans navigation instruments couldn’t agree on the route to take! „I’ll follow you!“ Chris said as our BBF‘s route was shorter! One left, one right and one left later the two humans were separated! Ours rode on and arrived at the Royal British Ligion Berlin Branch Office where Daniel, Chris‘s son and Andreas from the Berlin Branch were waiting!  Chris eventually arrived from the complete opposite direction all the humans expected! 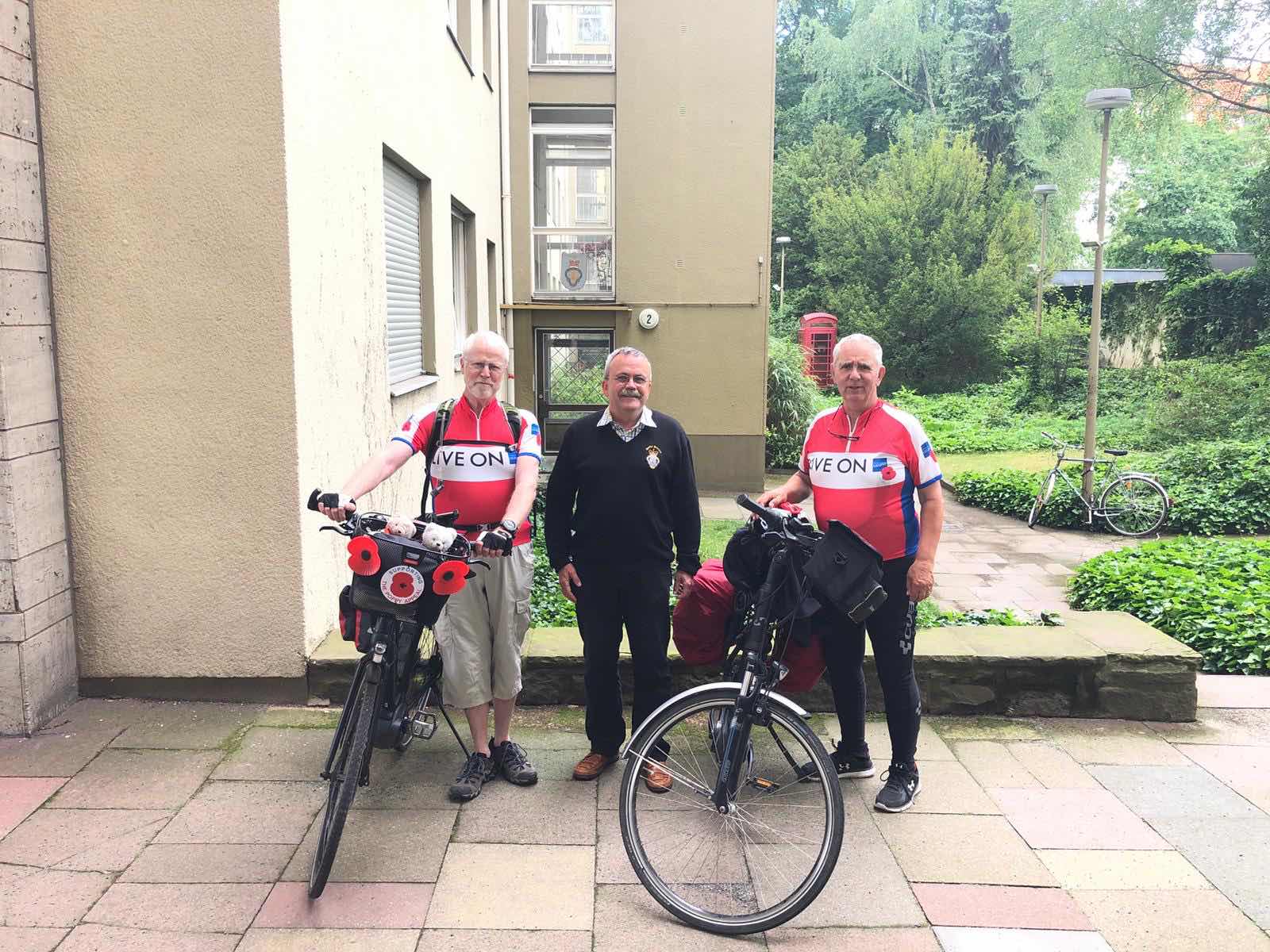 Daniel did the honours with the photos. You can just see the RBL Logo above the human‘s heads! Then without further ado goodbyes were said and we were off. 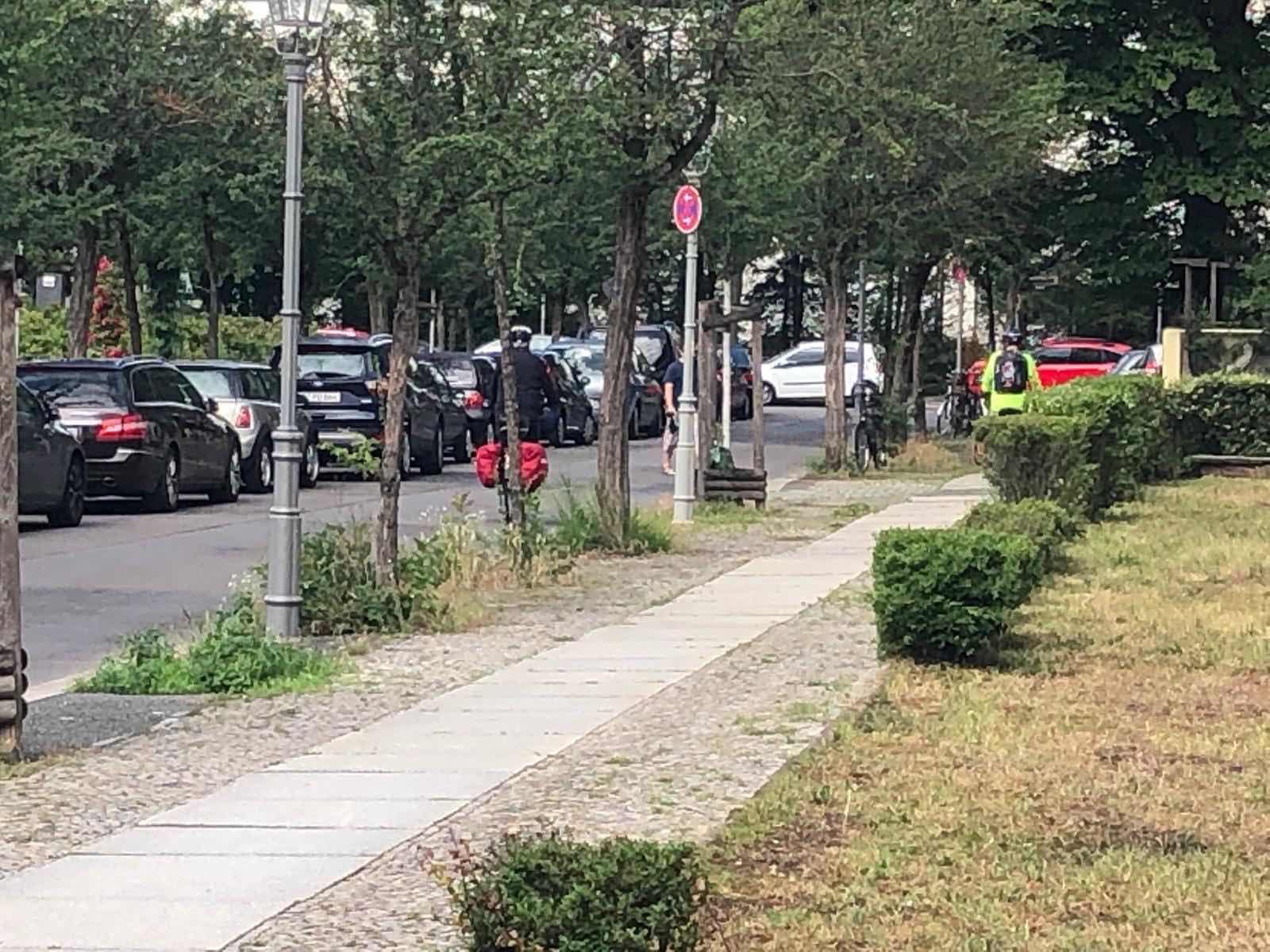 Alan changed the tight RBL cycle Jersey for a more comfy light dayglo yellow top.
Generally now for the first part of the journey we were on a cycle path which followed the Heerstrasse out of BERLIN. This was a noisy route as a lot of traffic thundered by.
Chris‘s navigation instrument is a TEASI a special cycle Navi. It picks out the best cycle routes and catorises them into „recommended“, „easiest „ and „shortest“! Alan uses Komoot which also seeks out cycle paths but does not offer you alternatives! Chri‘s Navi said we had to go 100 odd kilometres, Alan‘s said 94!
The humans started by following Alan’s but got fed up of the traffic for we were following a main road! Then then followed Chris‘s route which took us through woods and along quieter paths and roads.
The day was a lovely sunny one and so we Bears as we were not exerting ourselves were able to enjoy the journey. We think the humans did too, as there were certainly no complaints. It was flat with no hill to speak of until the late afternoon! But even then it was not much to speak about, except for the view from the top. 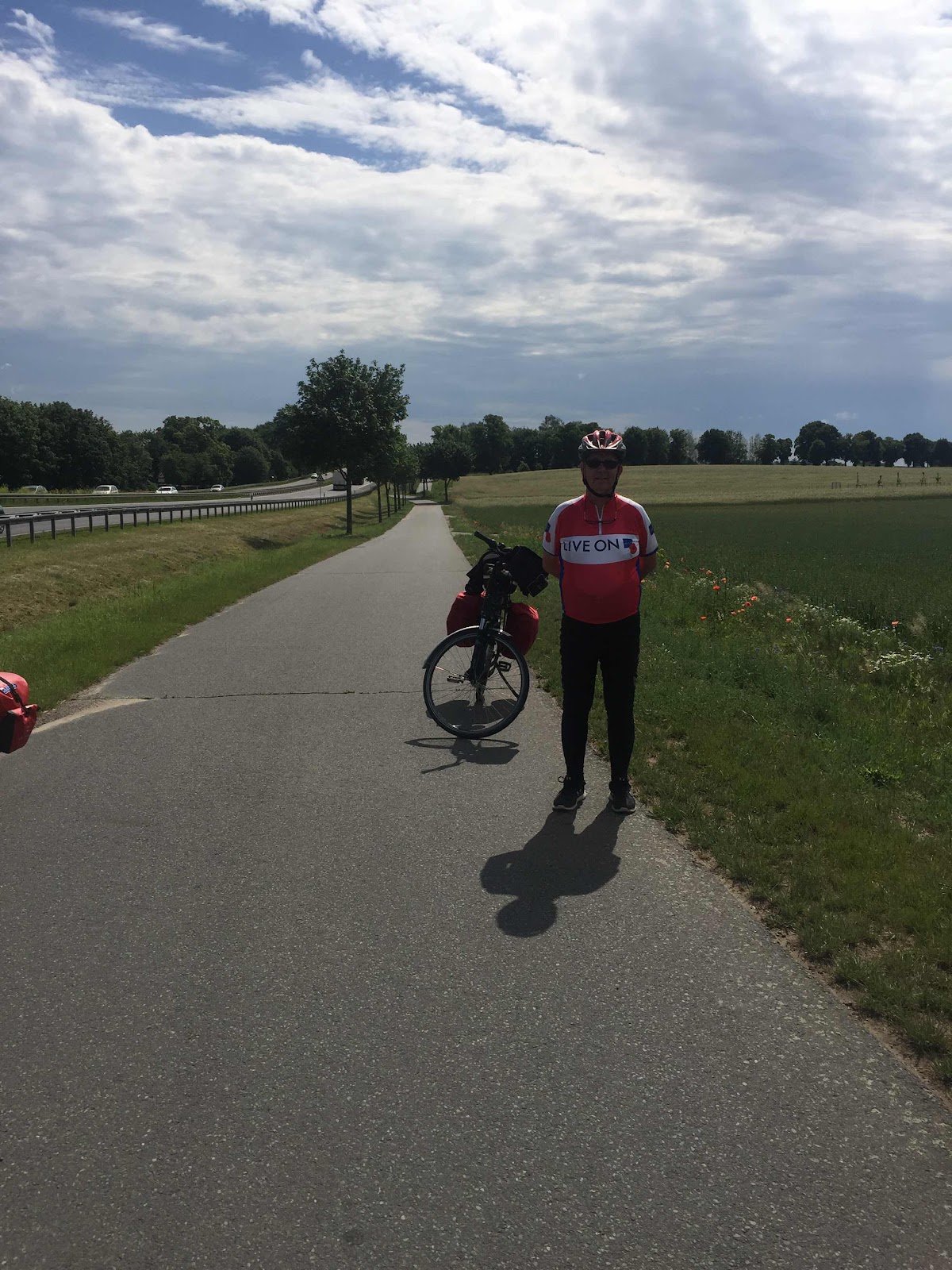 We  did cross over this major road using a foot bridge later. Which in many ways was a shame as we then could not stop to view a Soviet Cemetery! 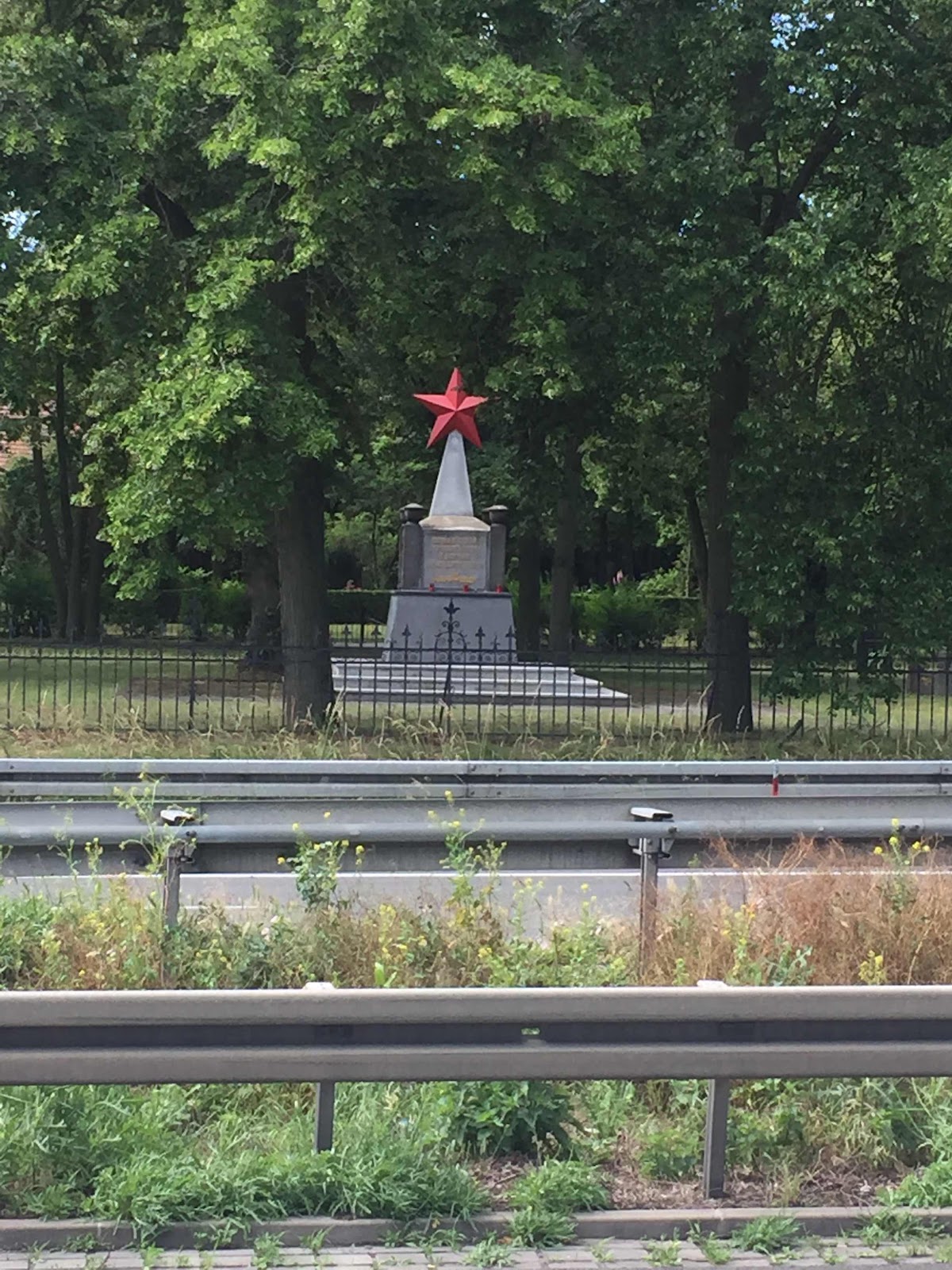 All the humans could do was take a picture from across the busy highway. 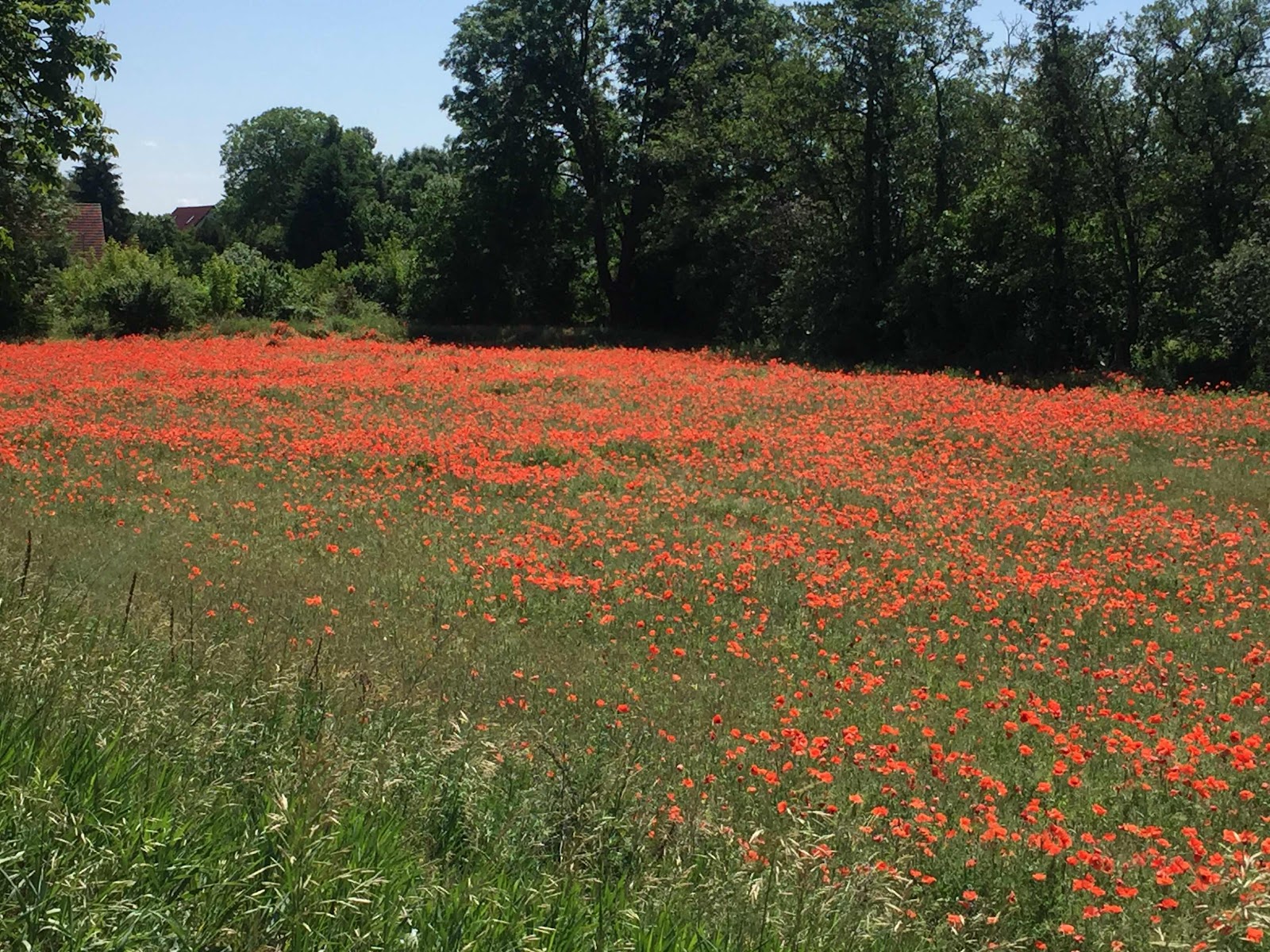 Once in the country we were cycling between fields of corn and often poppies, which reminded us of our Camino travels and the friends we had found on them.
Lunch was had in an Asian Imbiss and shortly thereafter on the other side of Nauen we found ourselves on a former railway track! Initially the going was good but there were patches where the tree roots had made waves in the tarmac! This sudden unevenness caused Chris‘s panniers to leap off his bike! 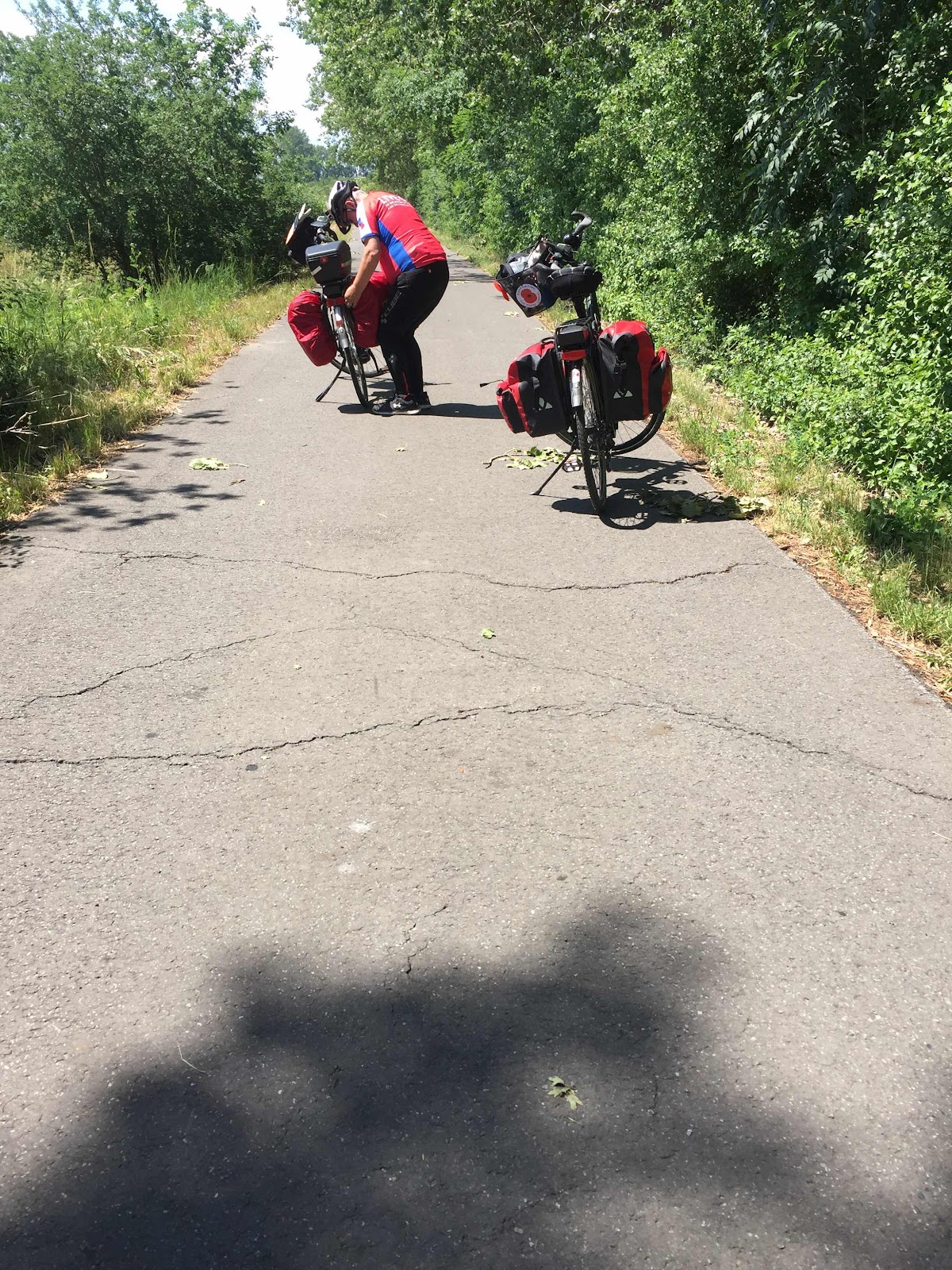 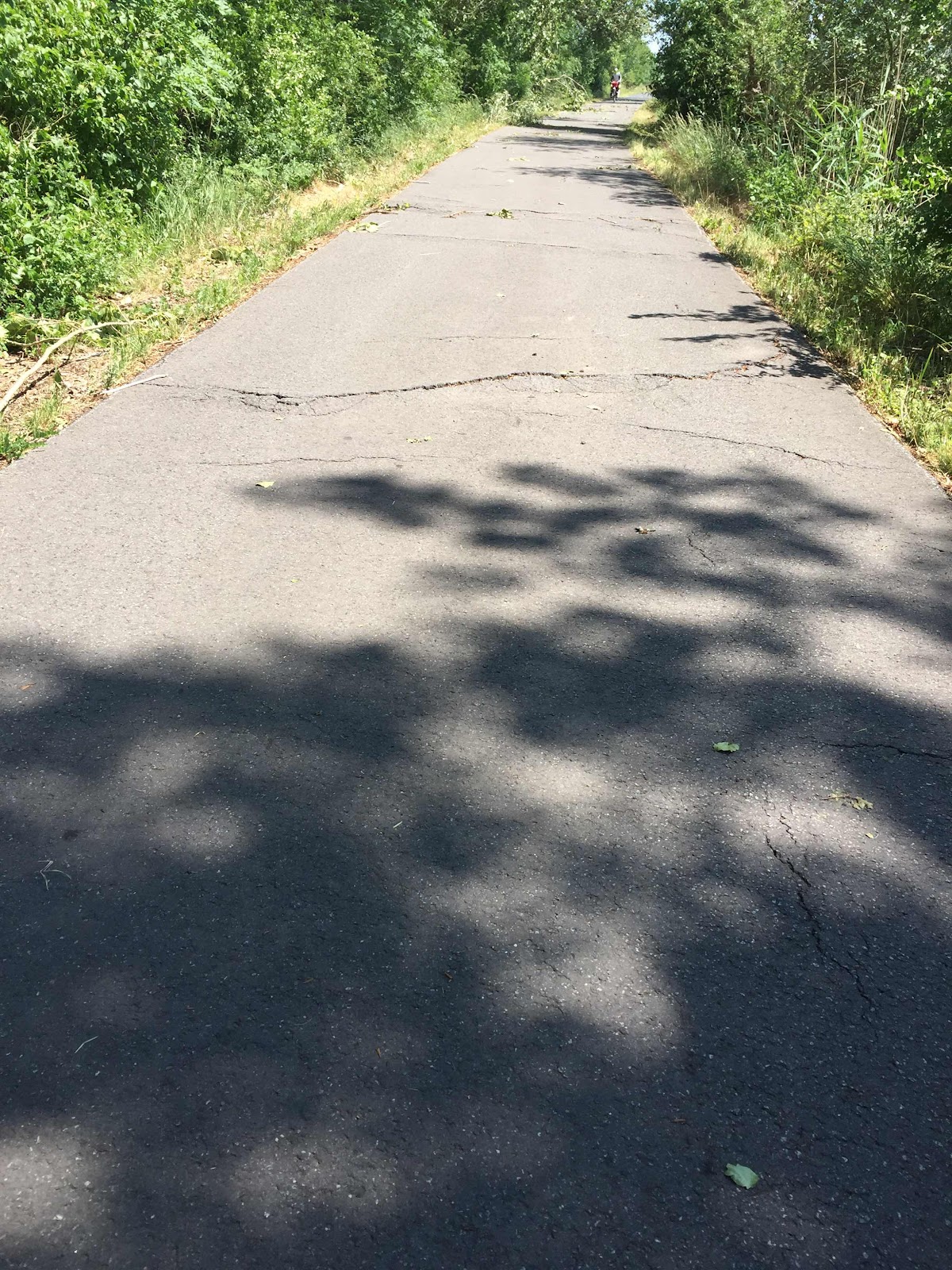 The pictures do not do justice to the actual ground. 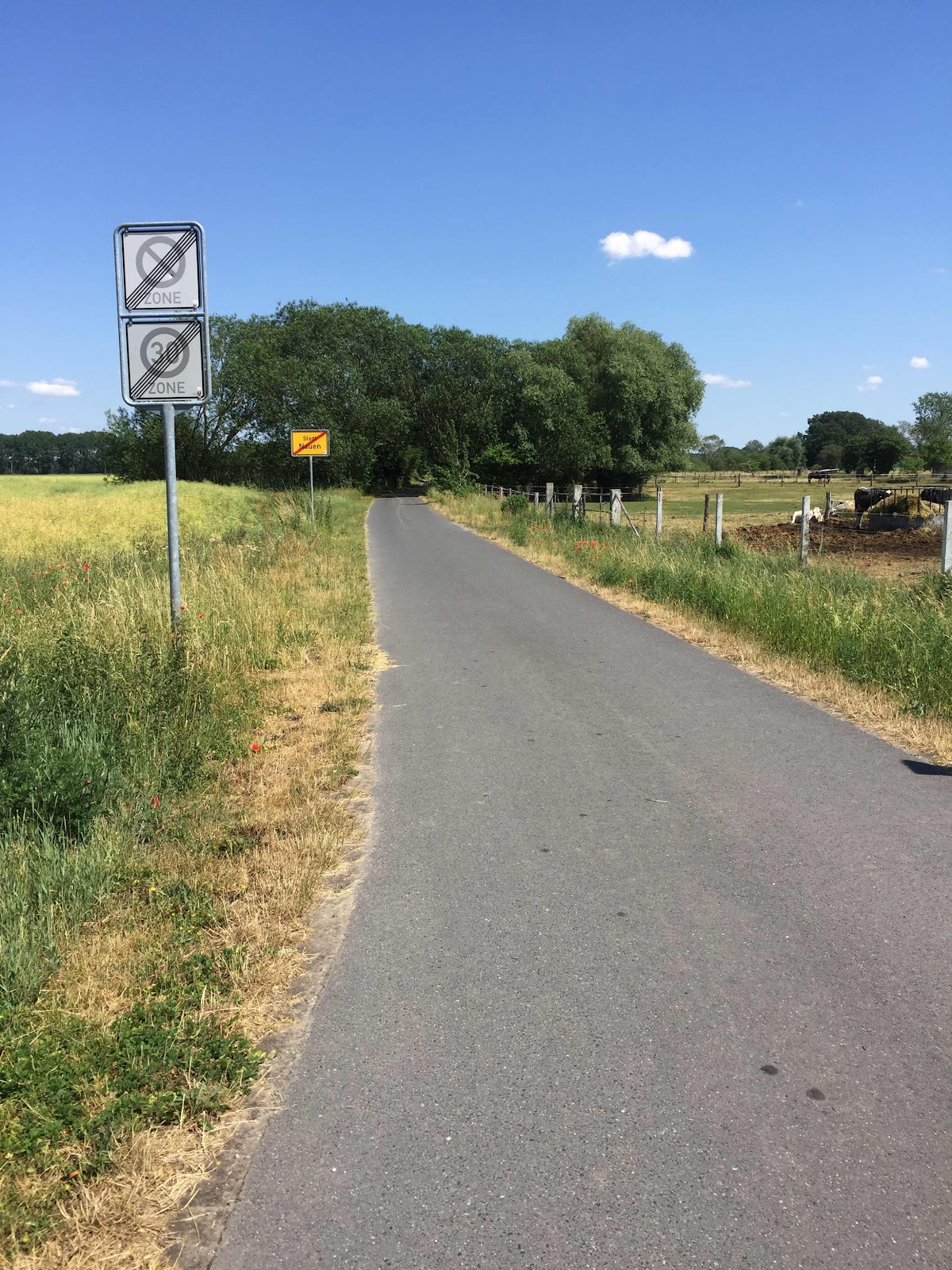 This was the other end of the railway line and now we followed country roads. 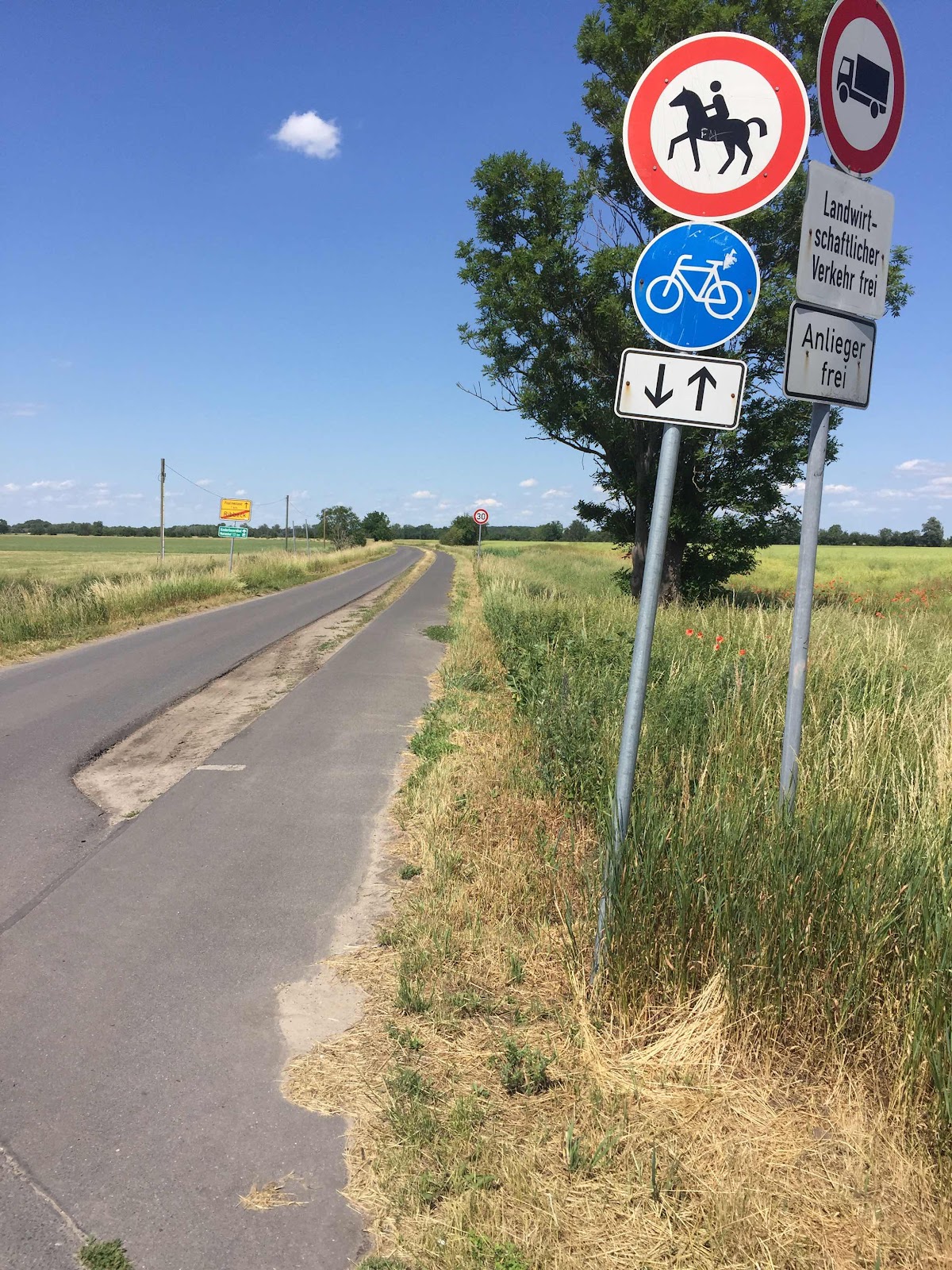 Occasionally the humans paused to study a proper map to ensure we were going in the right direction. 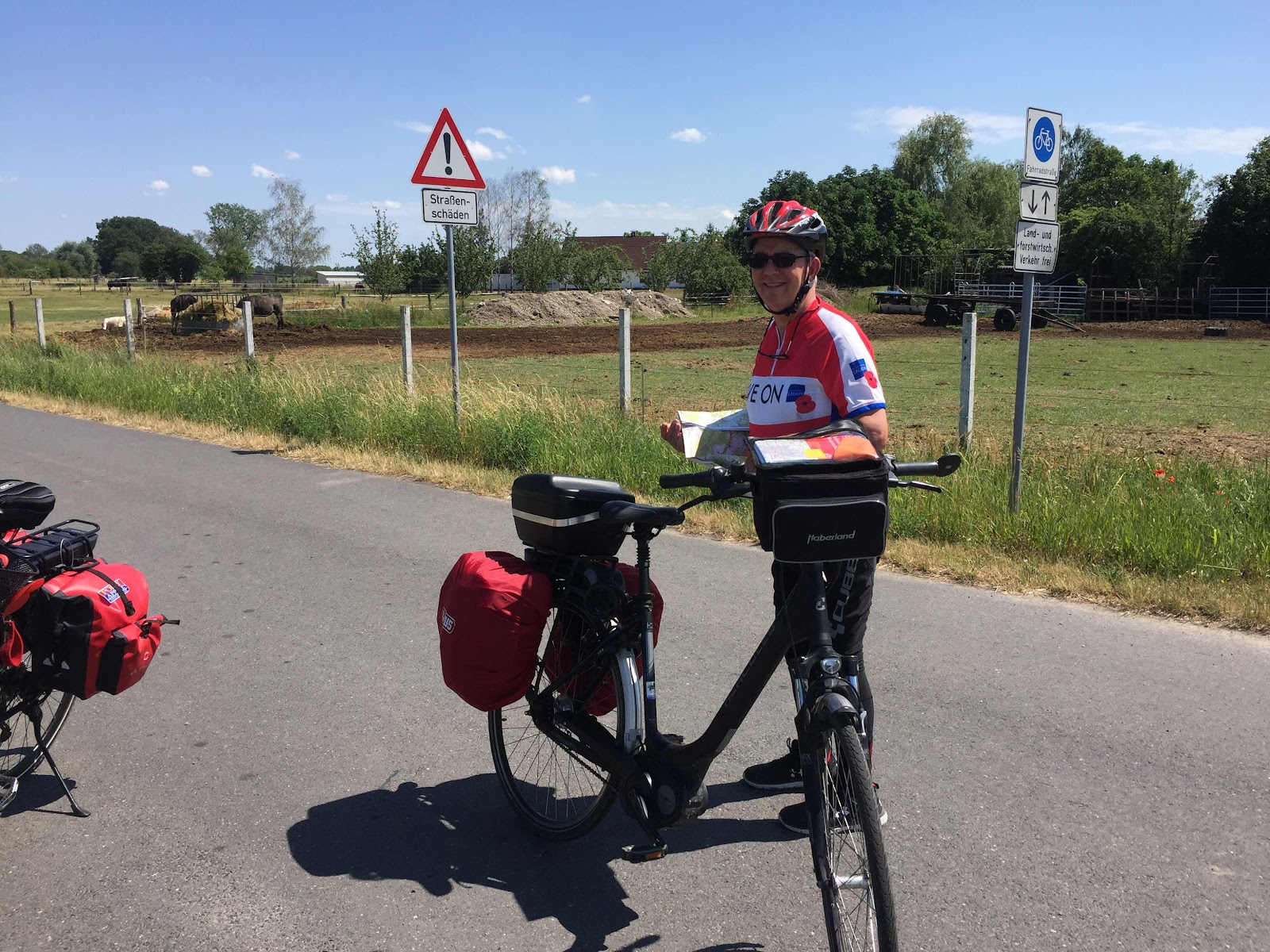 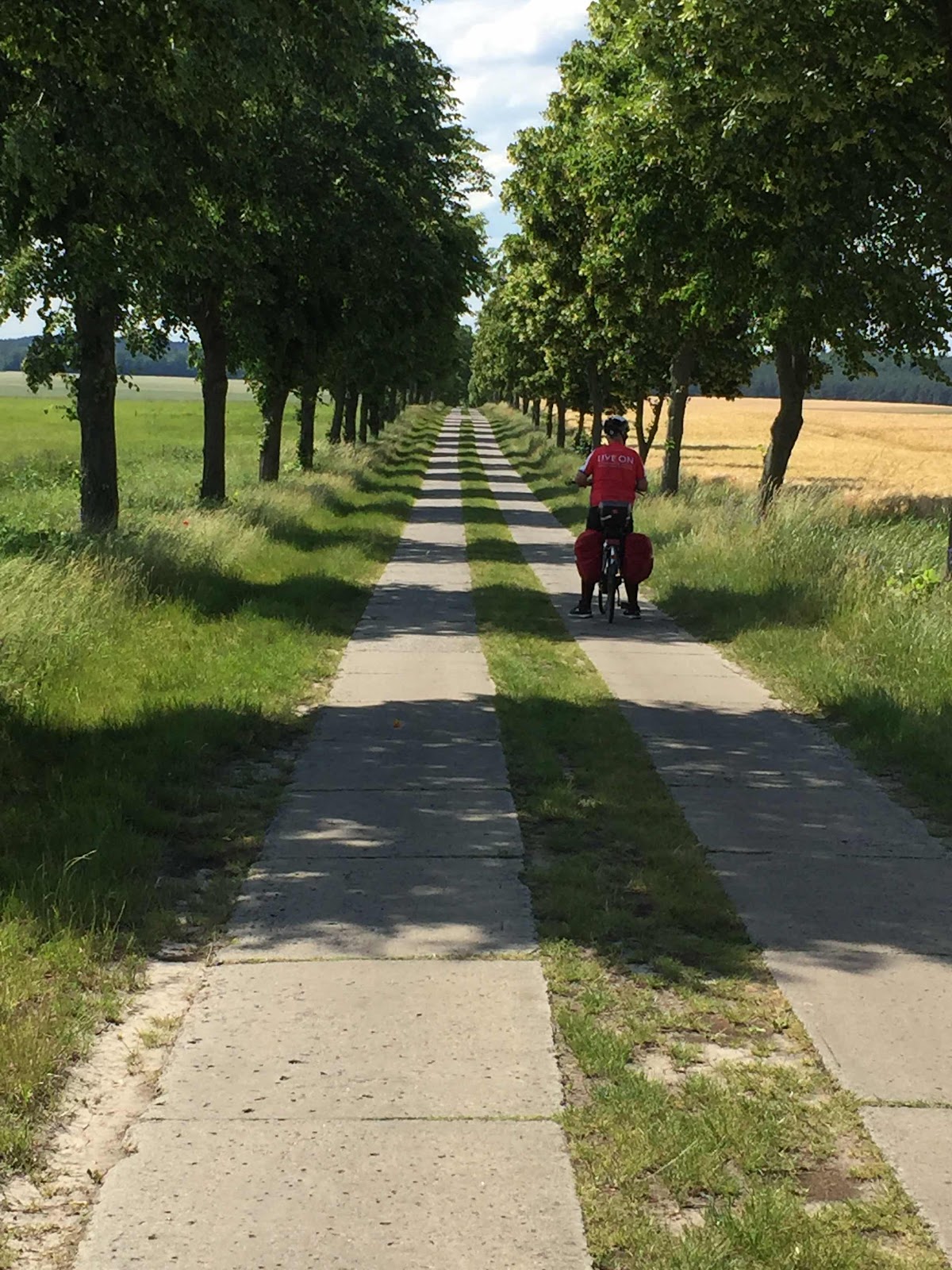 We even followed what Alan thought was a GDR Tank road as it was made out of precast concrete like we have seen on the old inner German border! 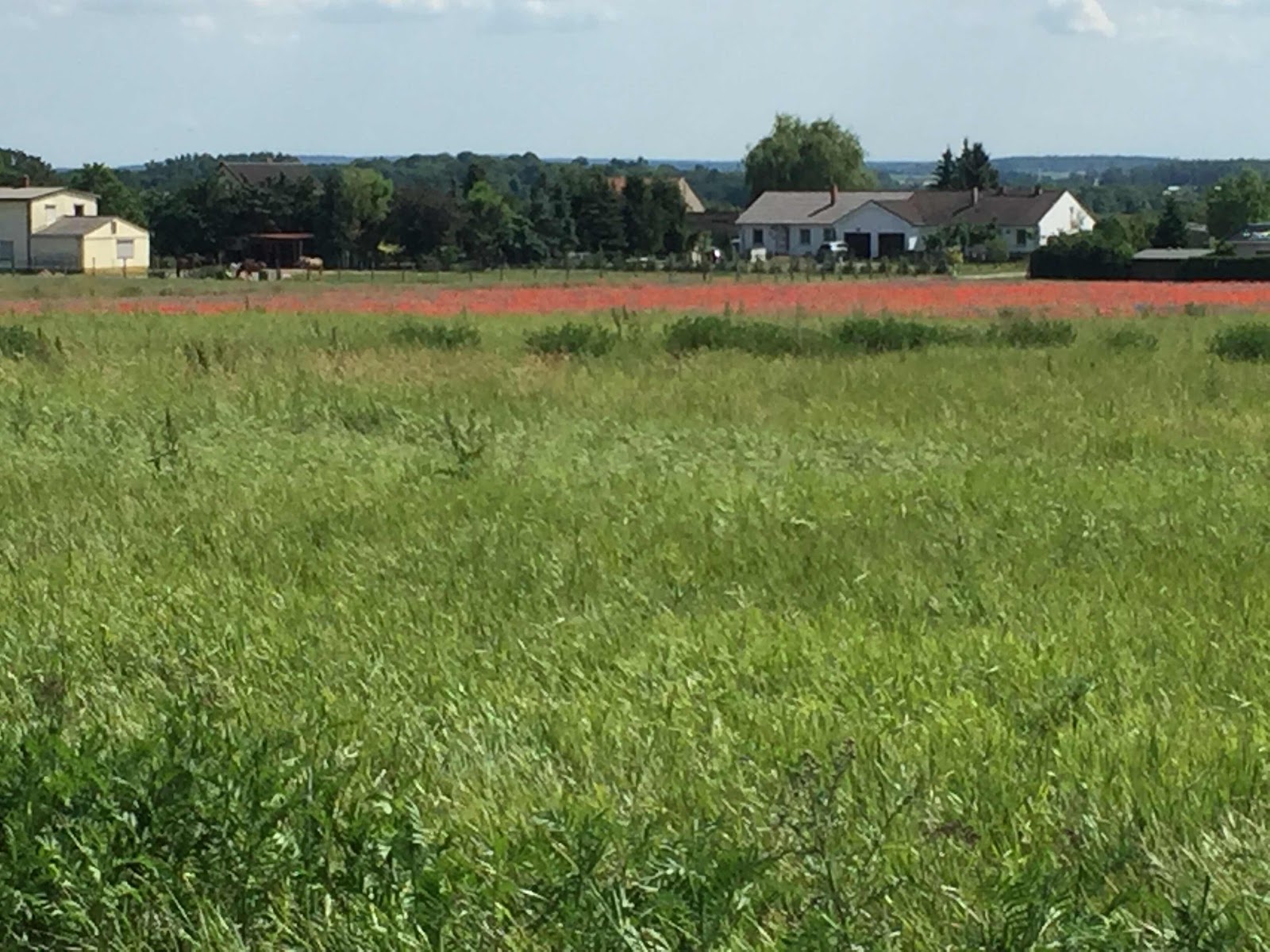 Here we were probably at the highest point of the day! 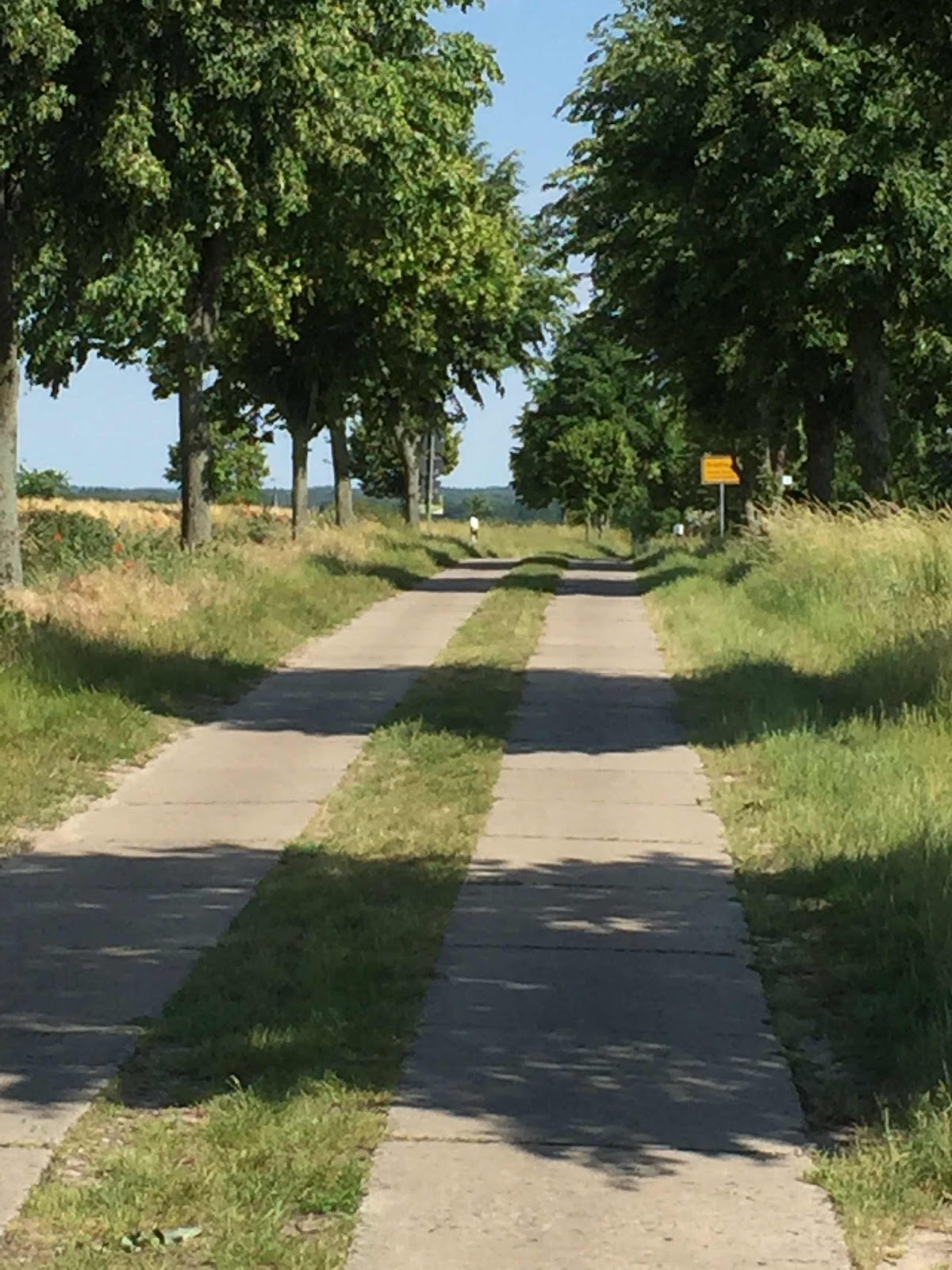 In Friesack the humans stopped for an ice cream! 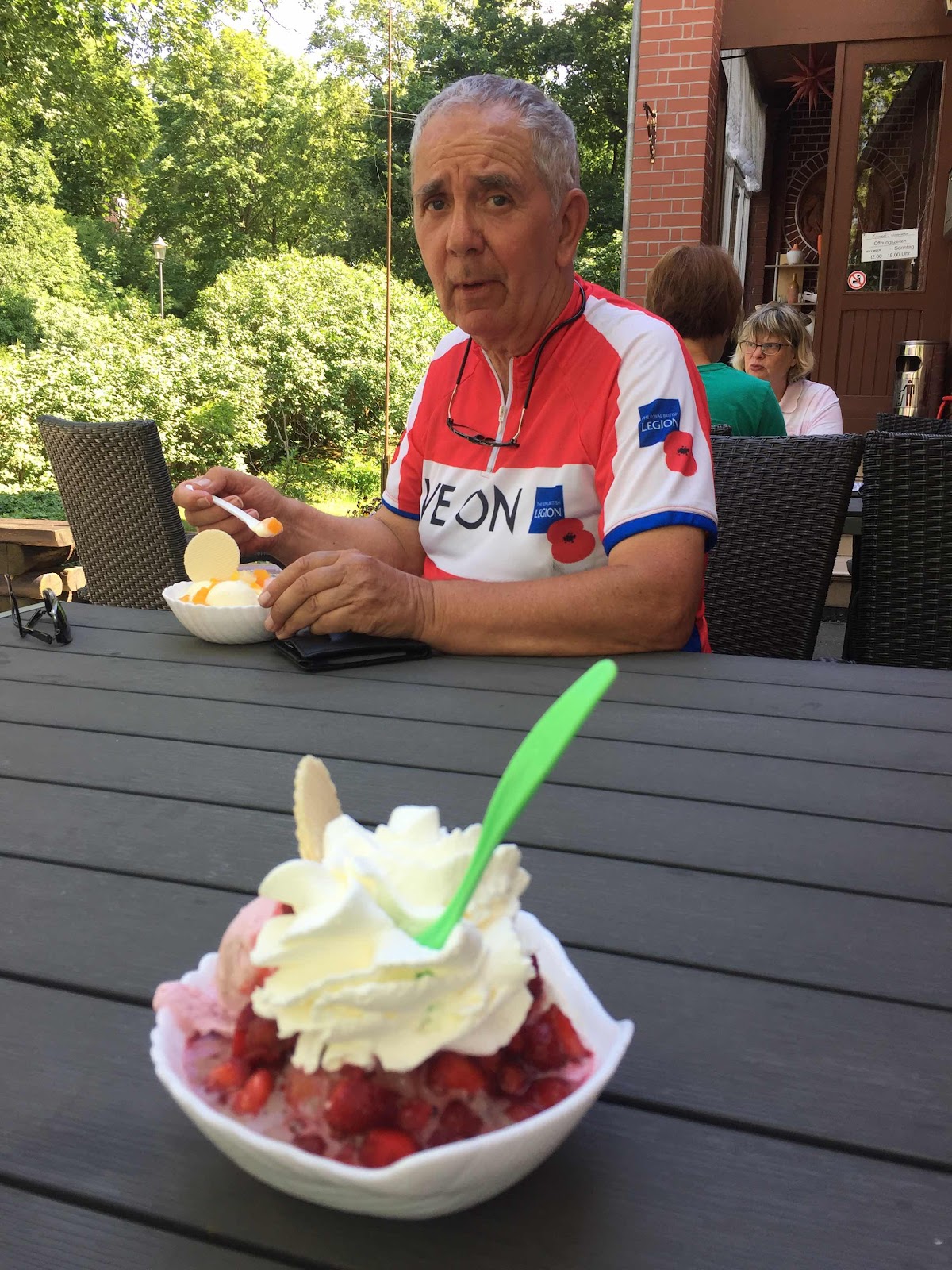 When we arrived in Rhinow the humans had had enough and Alan noticed a sign advertising rooms to let. He rang up and we were all pleased to be given a room each!
The accommodation is in an old Railway Station. Chris had the Kippler Room and we have the Egyptian Room. When our BBF chose it we did not know it was called thus! Some of you will know that we have been five times to Egypt with our human three times to learn Arabic, so we felt it appropriate! 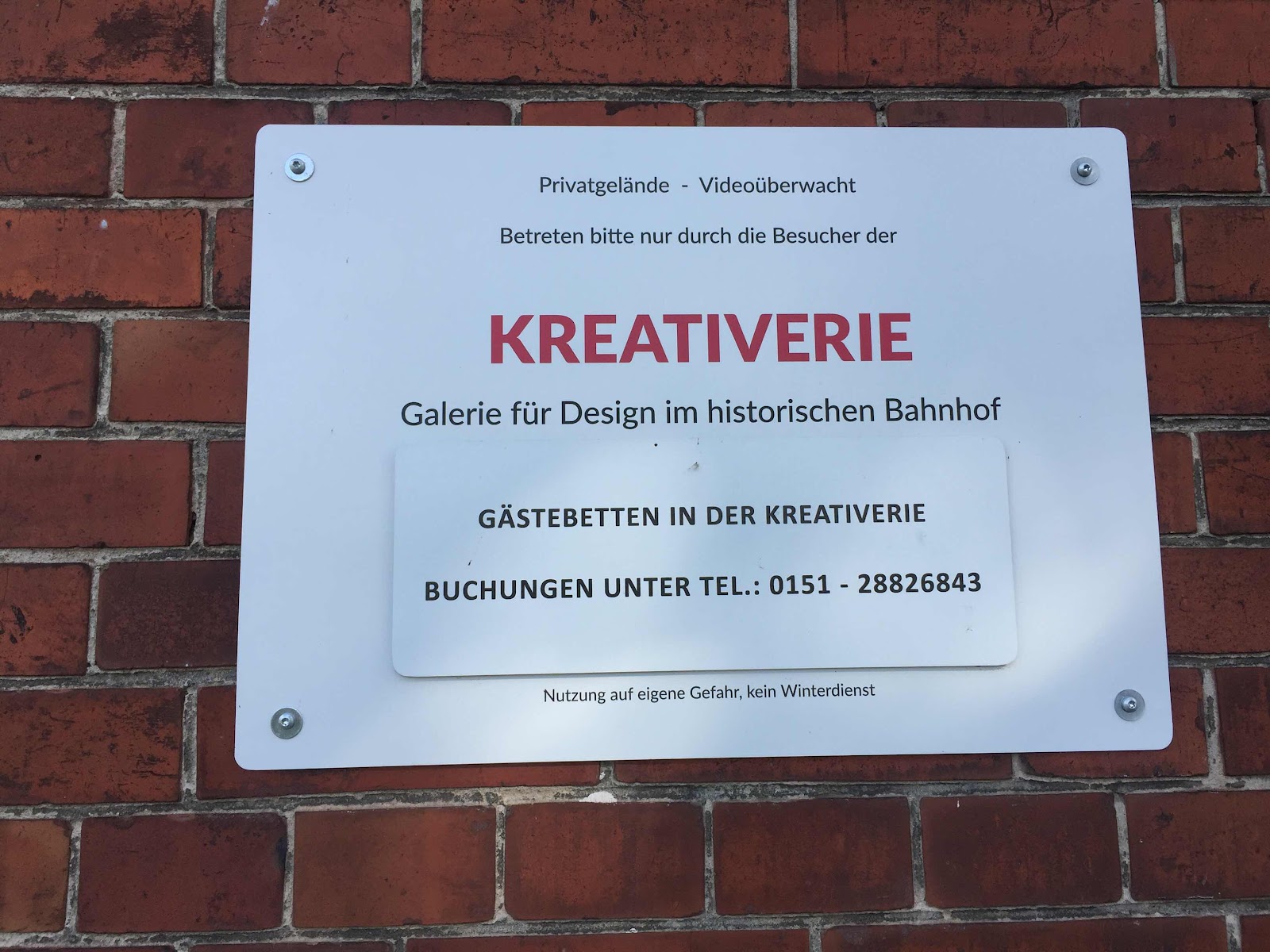 The nice lady that checked us in, also went to the petrol station to get isotonic drinks and mineral water for our humans!
Today our humans have cycled 86.4 kms which is the longest distance Alan has ever cycled in one day.
We have no idea where we will end up tomorrow but you will be the first to know when we get there!
May we also mention that these two humans are cycling this to raise money for the Poppy Appeal and if you have not sponsored them yet please do so by clicking the Just Giving Button on this Blog or by going on the Just Giving Web Page and entering our humans name, Alan-Tyson-Carter! Thank you!