A Cool Ride to Herford, Bielefeld and Beyond!

This morning we were up early for breakfast at 07:00 hrs. James was in good form and was sad to see us go, as we had been company for him, who now lives alone!
We set off, but initially in the wrong direction, turned round and got on the right road soon enough. The day was overcast, grey and cool, which was nice for cycling. Today, Thursday 20  June, was a public holiday, so there were very few cars about. 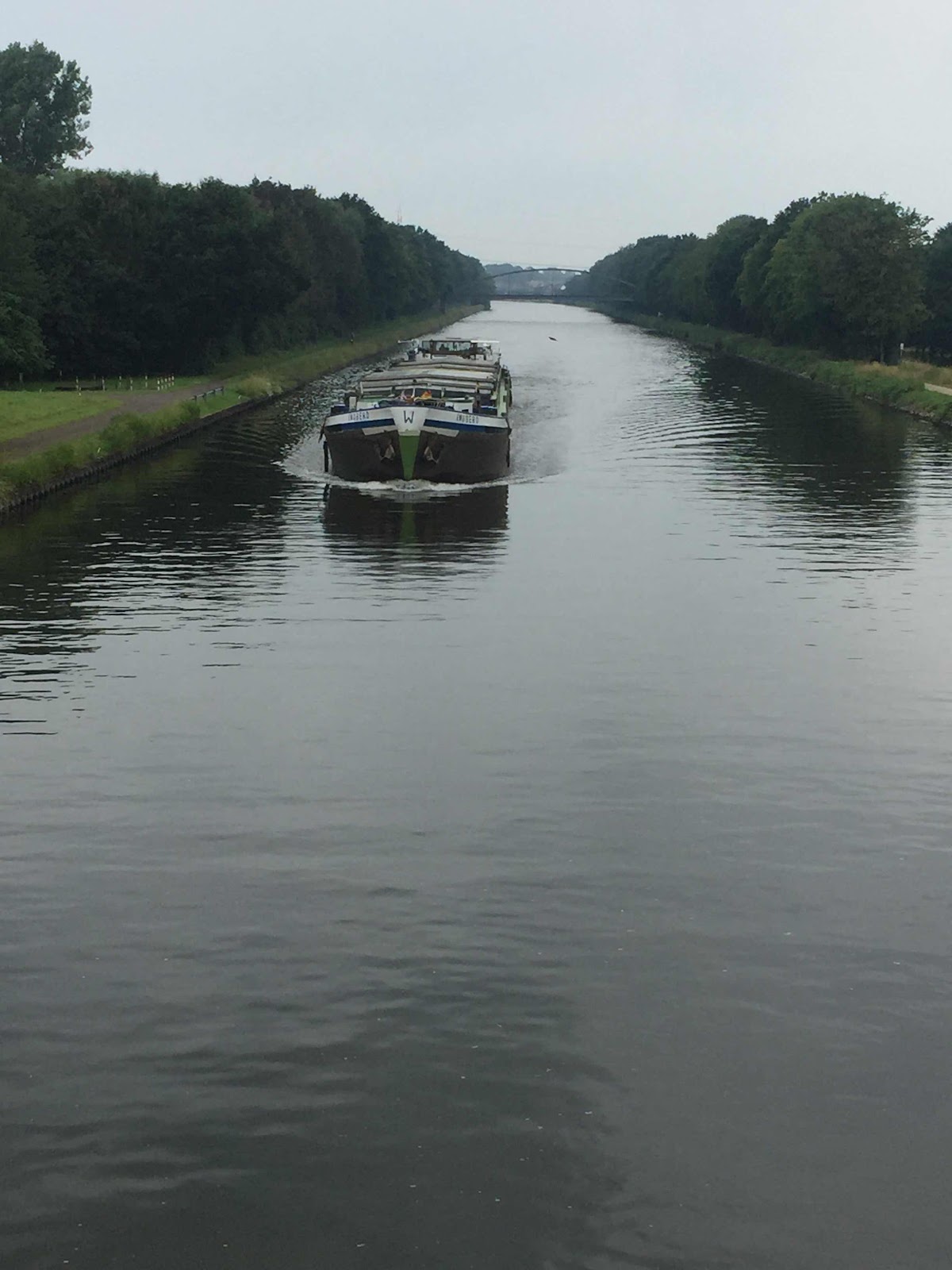 We crossed a canal and as you can see the day was grey. 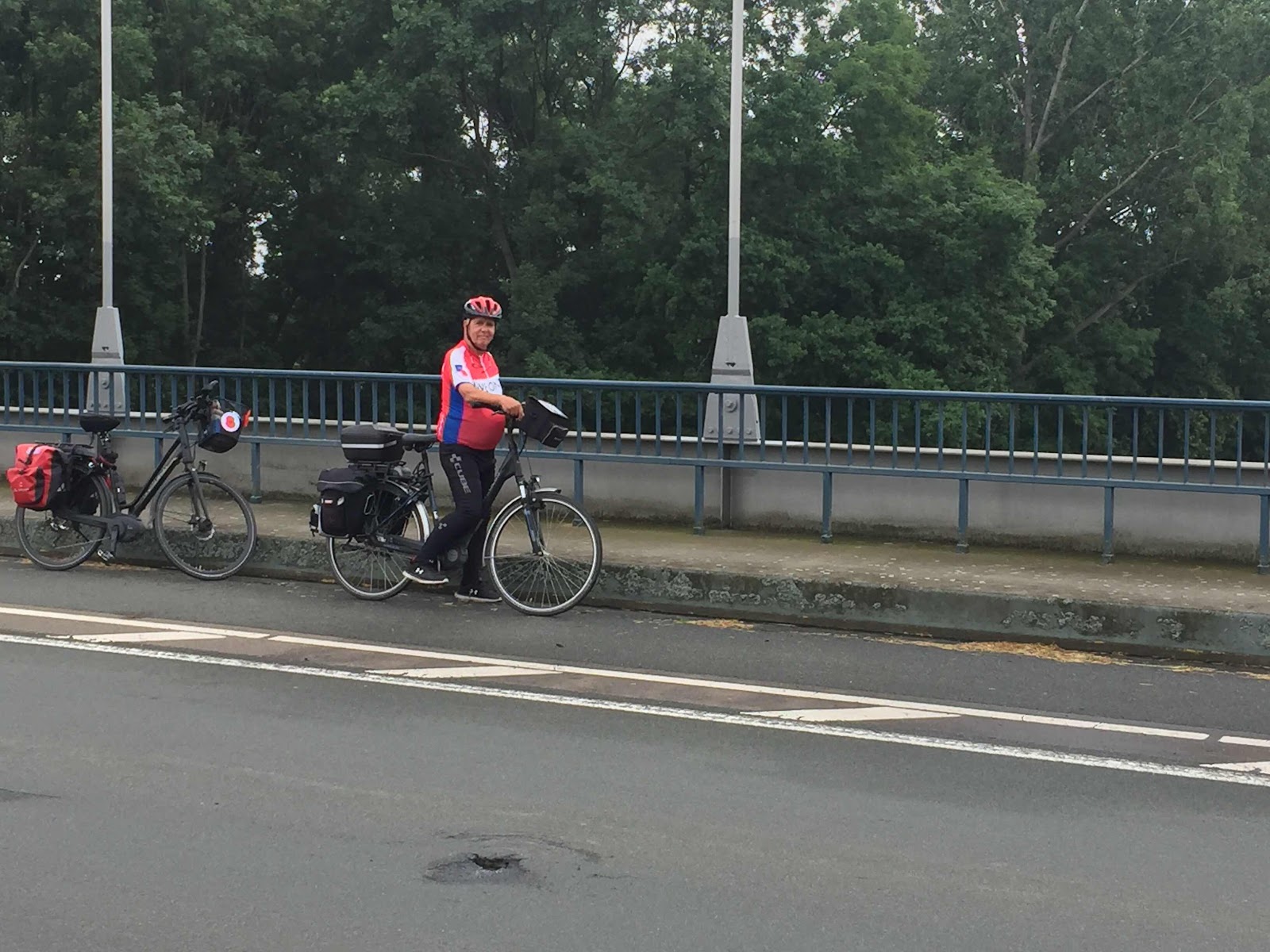 The route was easy enough even though it went slowly up hill, until the big hill we had to cross appeared before us! 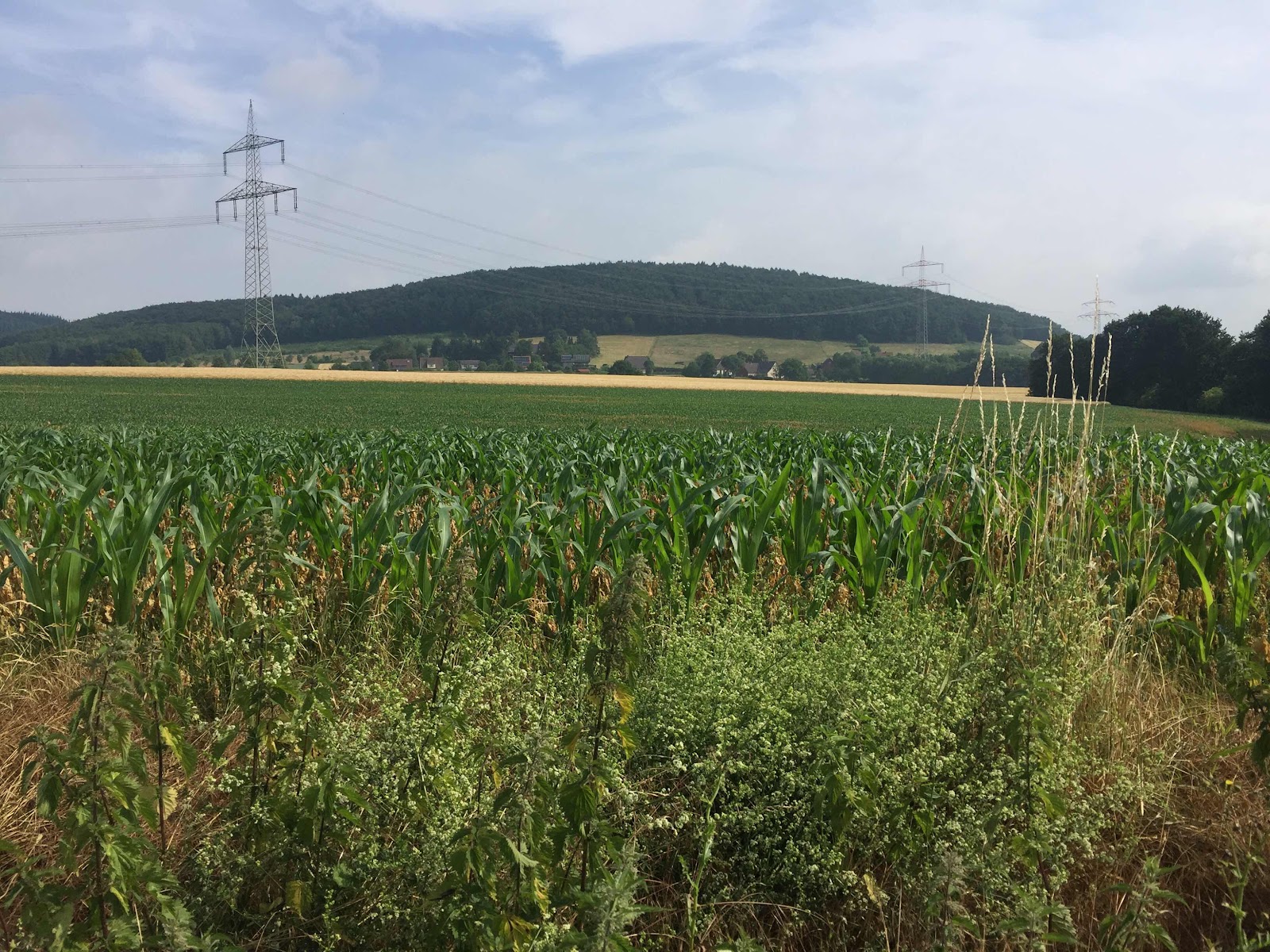 Here we are looking back at the hill we came up and over. Now the sun also smiled on us. 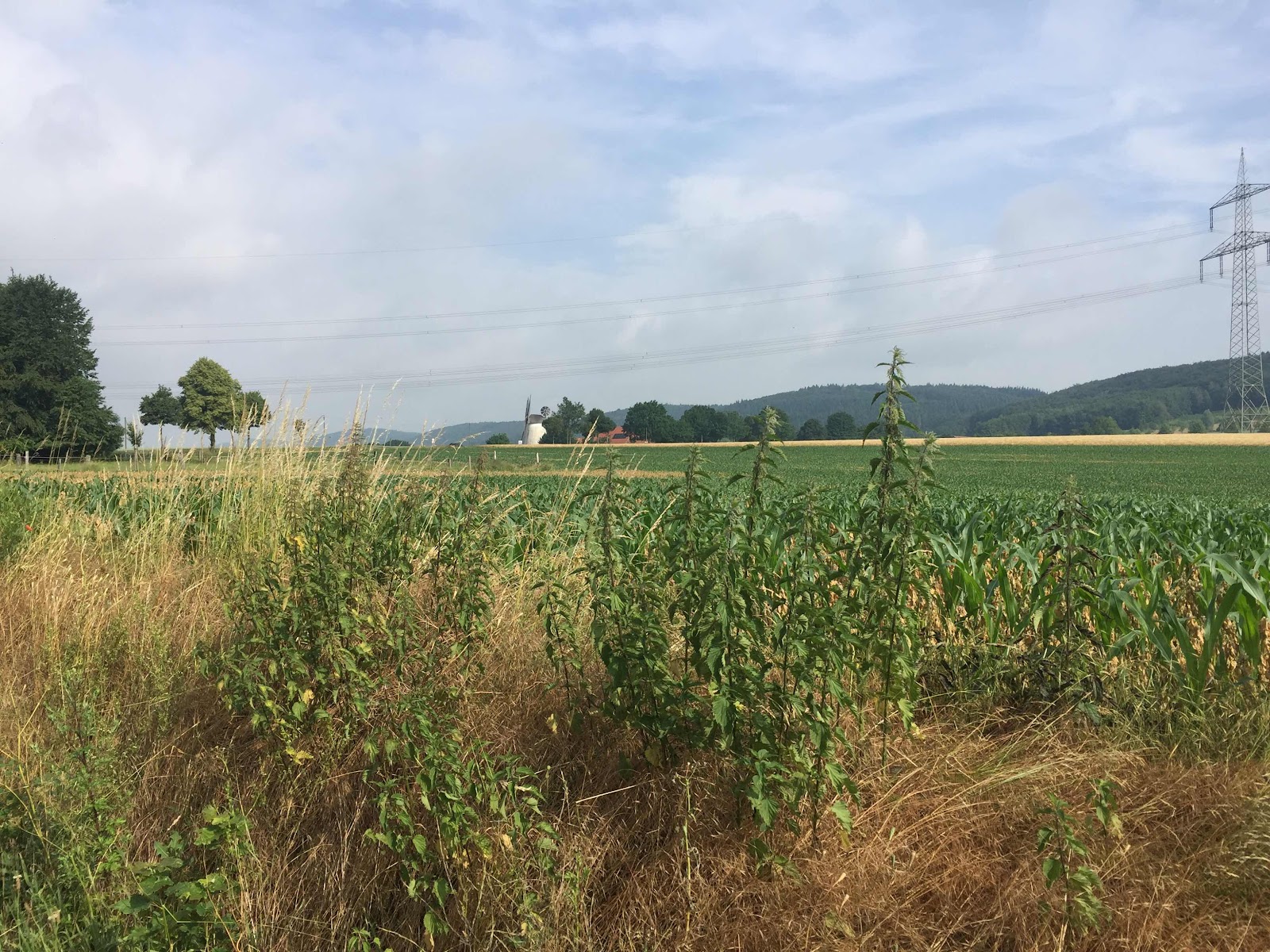 We all enjoyed the rush down the other side and in just a little over three hours we arrived in Herford! 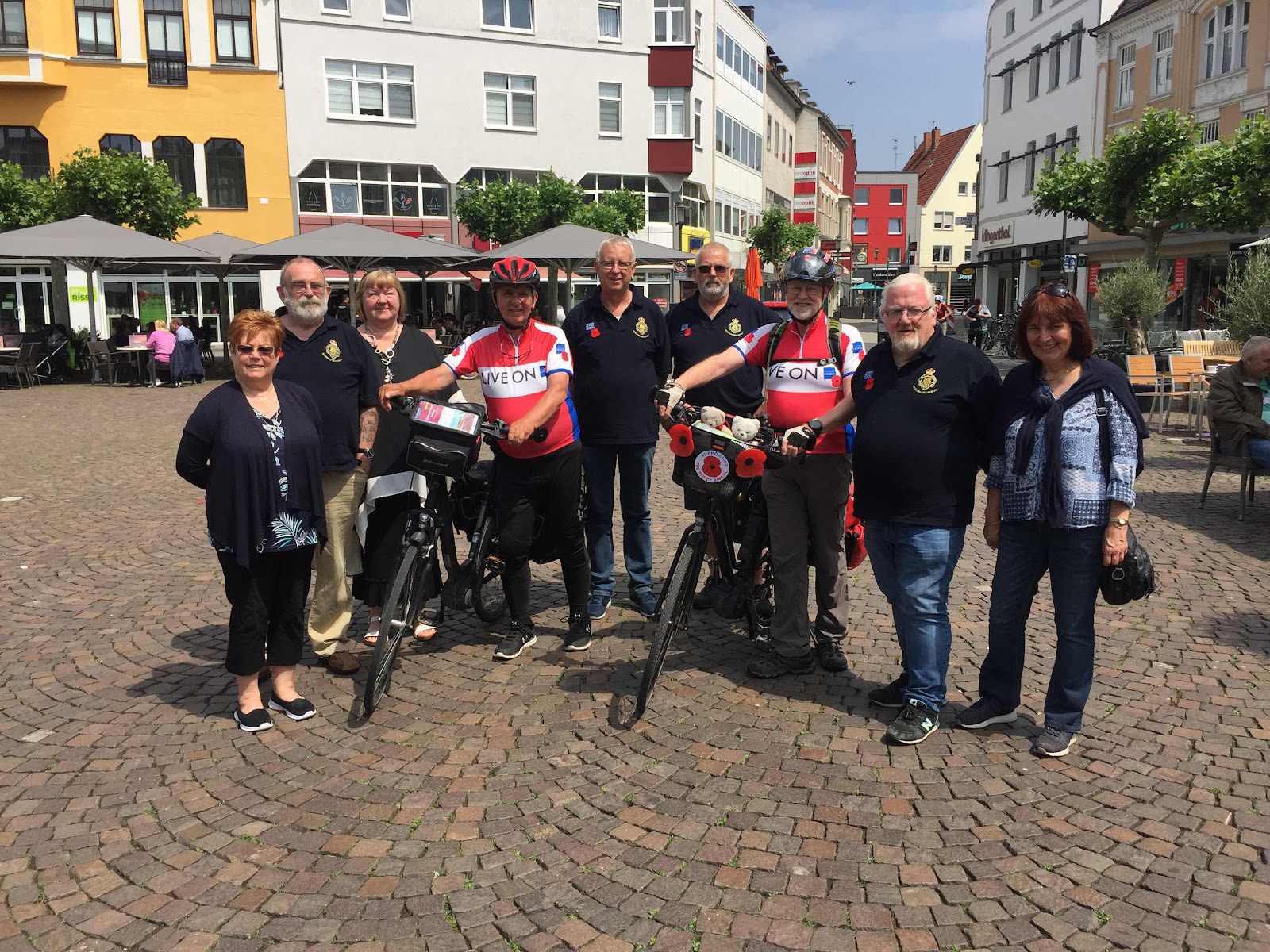 There was a goodly crowd in the Alter Markt to meet us. The Chairman, Terry Salmon, the Vice chairman, Alan Dixson, the Secretary, Pete Wood, and their Photographer, John Hughes were there to meet us, to name but a few! Some even brought their wives.
Our BBF was worried about his battery power, as he had used quite a bit to get up and over the hills, and so permission was sought to charge it in the Café where they all met. Then isotonic drinks were ordered and some victuals to eat. Questions were answered and generally the atmosphere was of a celebration, which was much appreciated by the two cyclists.
To please the photographer our two humans had to cycle round and enter the square again and then we were off to the sound of everyone wishing us well! 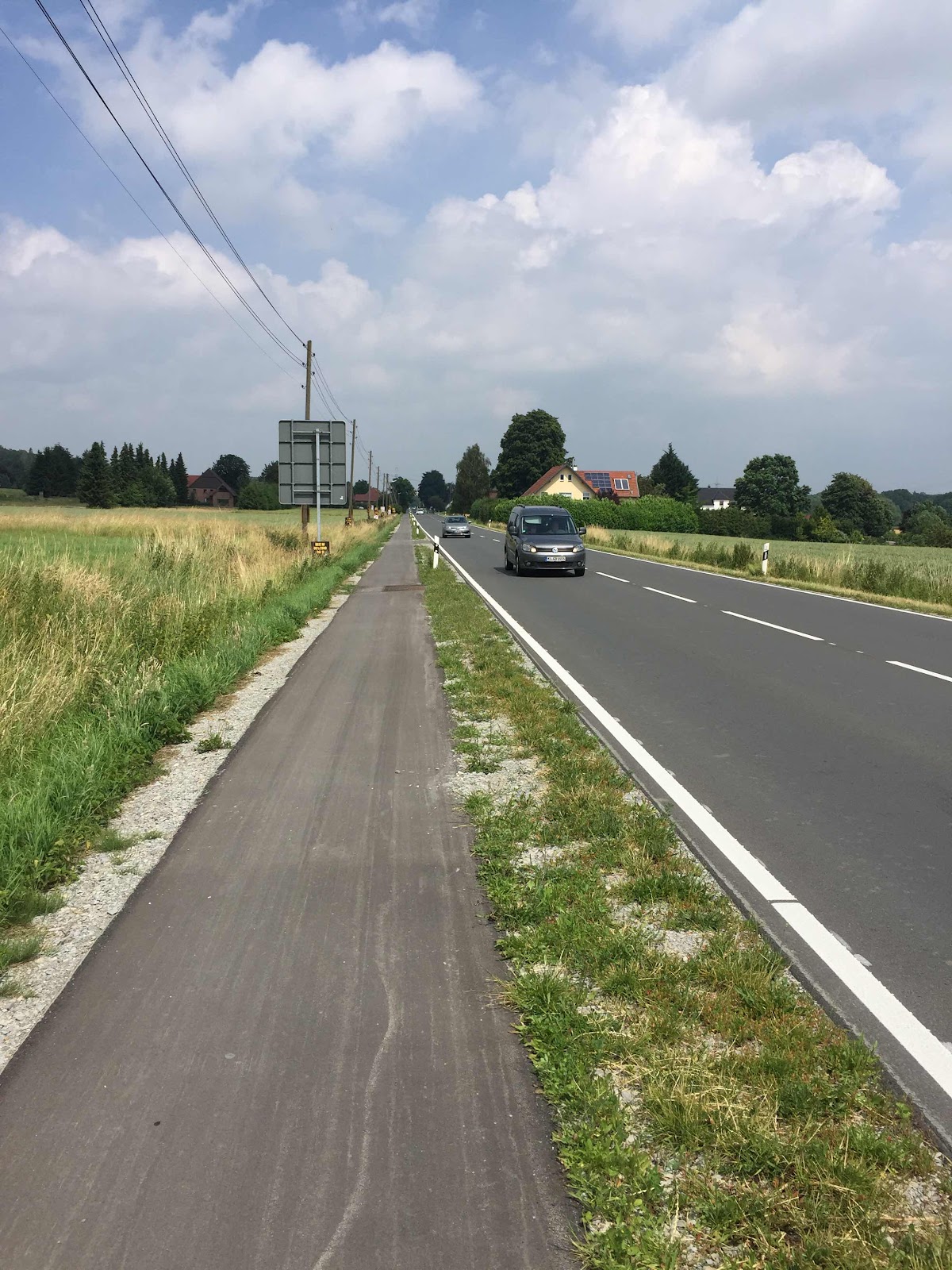 The route to Bielefeld followed a major road, but as it was a holiday there was little traffic. 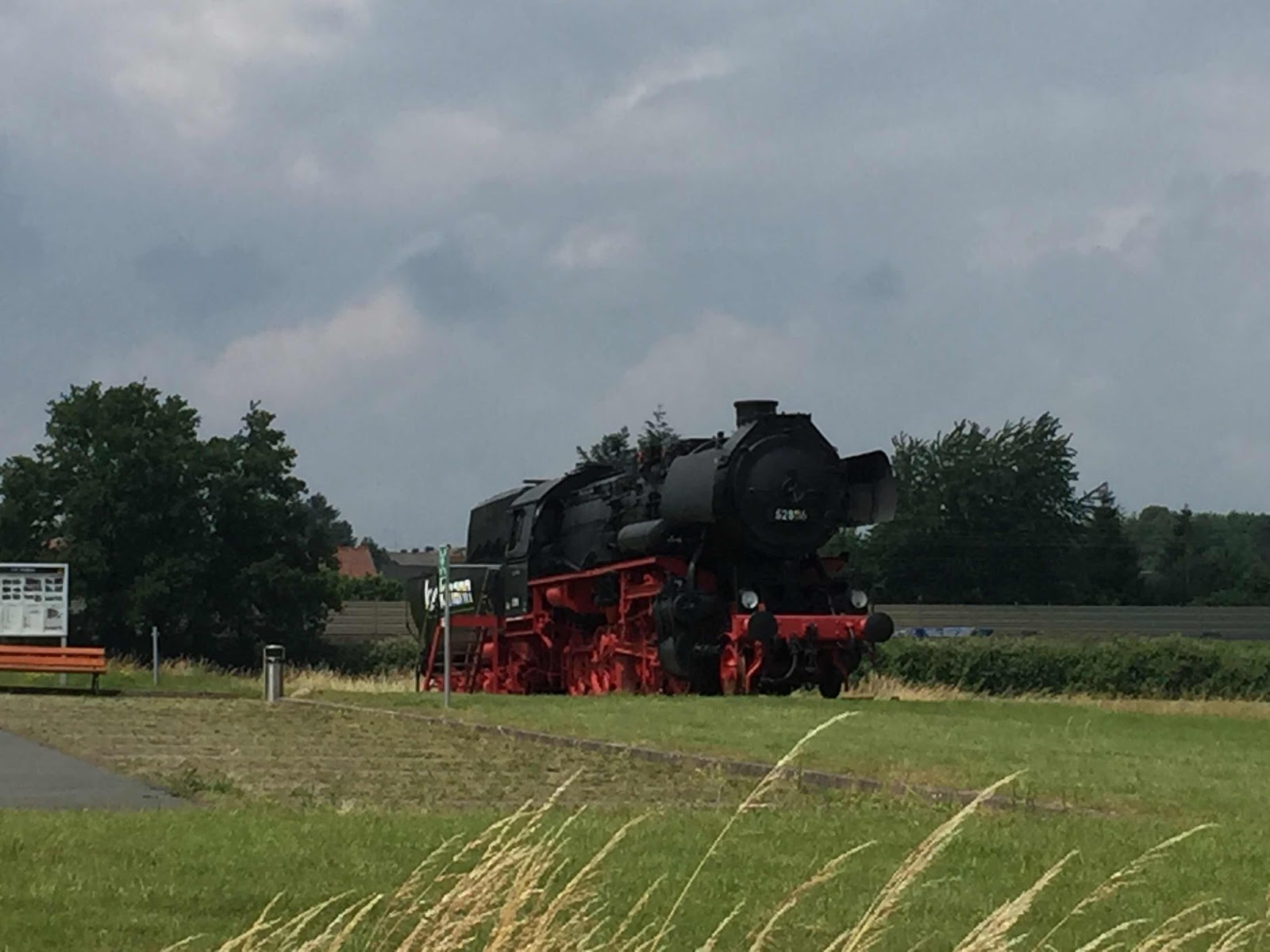 Alan loves old steam engines and so he had to stop to photograph this one!
Further along the road, Chris‘s Navi said turn left, but Alan’s said go straight on. Chris then said, “well you follow yours the!” Which was a mistake as Alan took him at his word. So each went his own way! 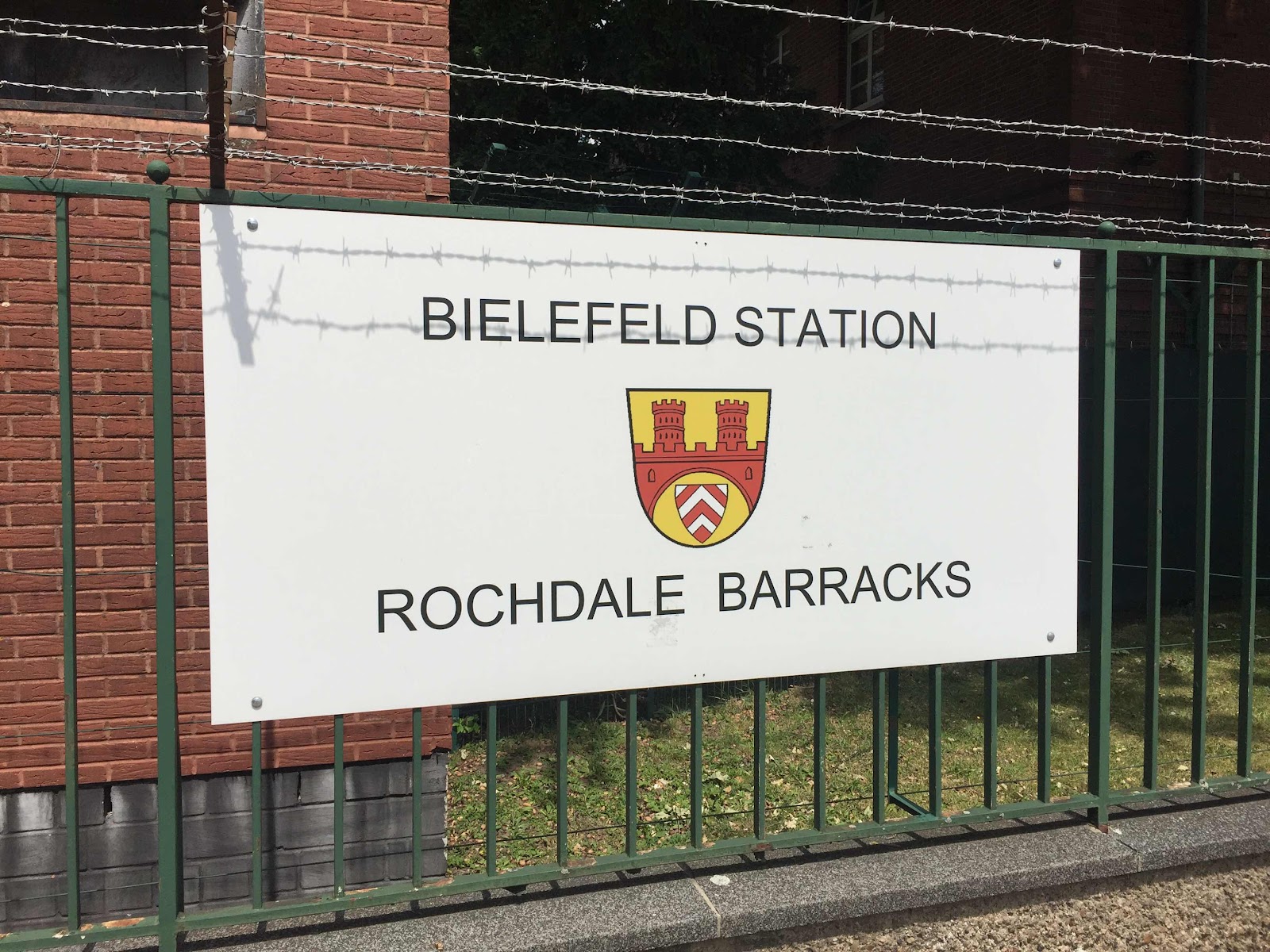 We arrived first by about 10 minutes, and the guards at the main gate to the barracks all shouted at him, no photographs, as he took this picture!
He then went up to them and told them what we were doing. 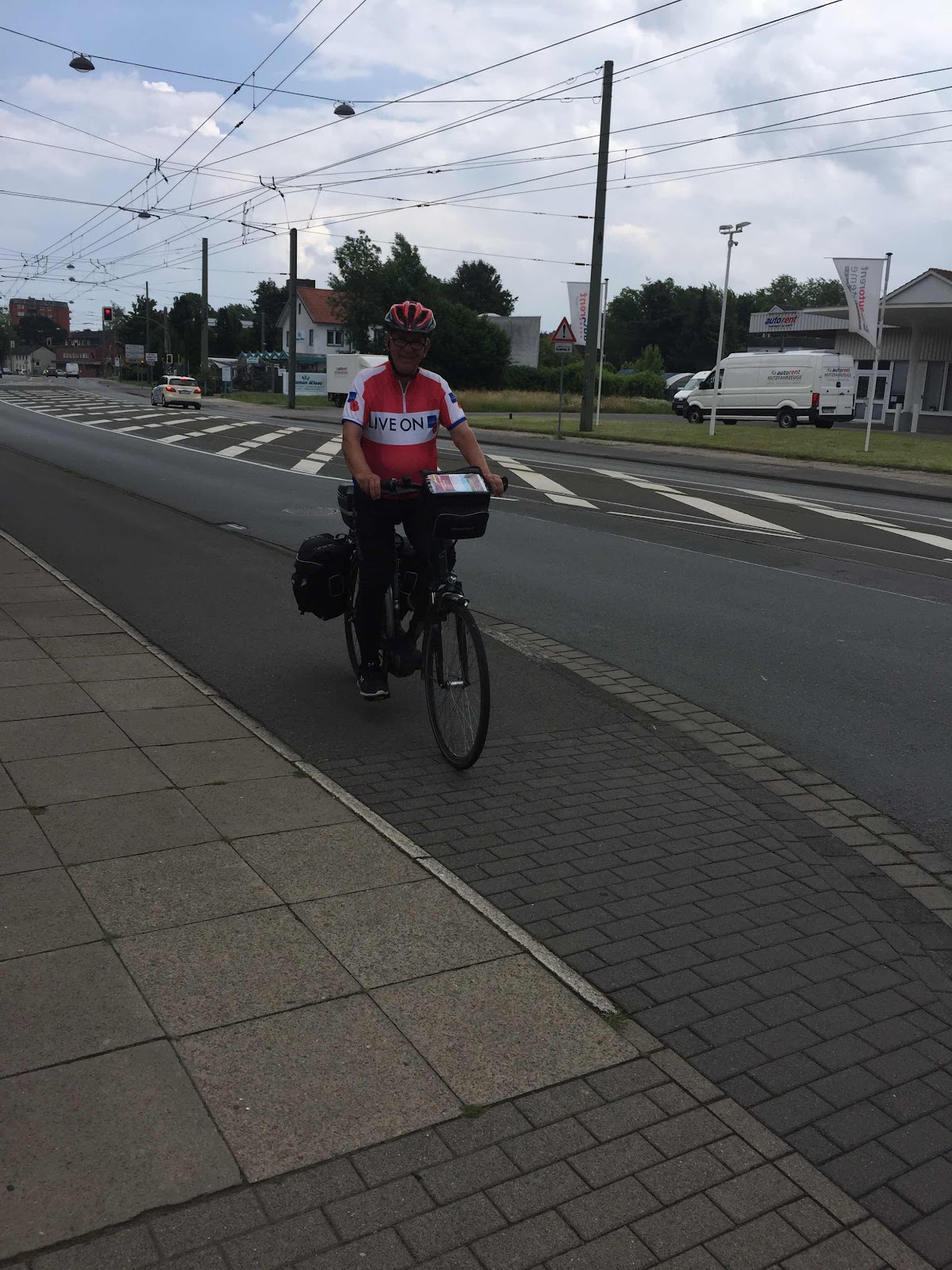 Chris arrived and so now we entered camp and went to the block where the Bielefeld Branch had their office. 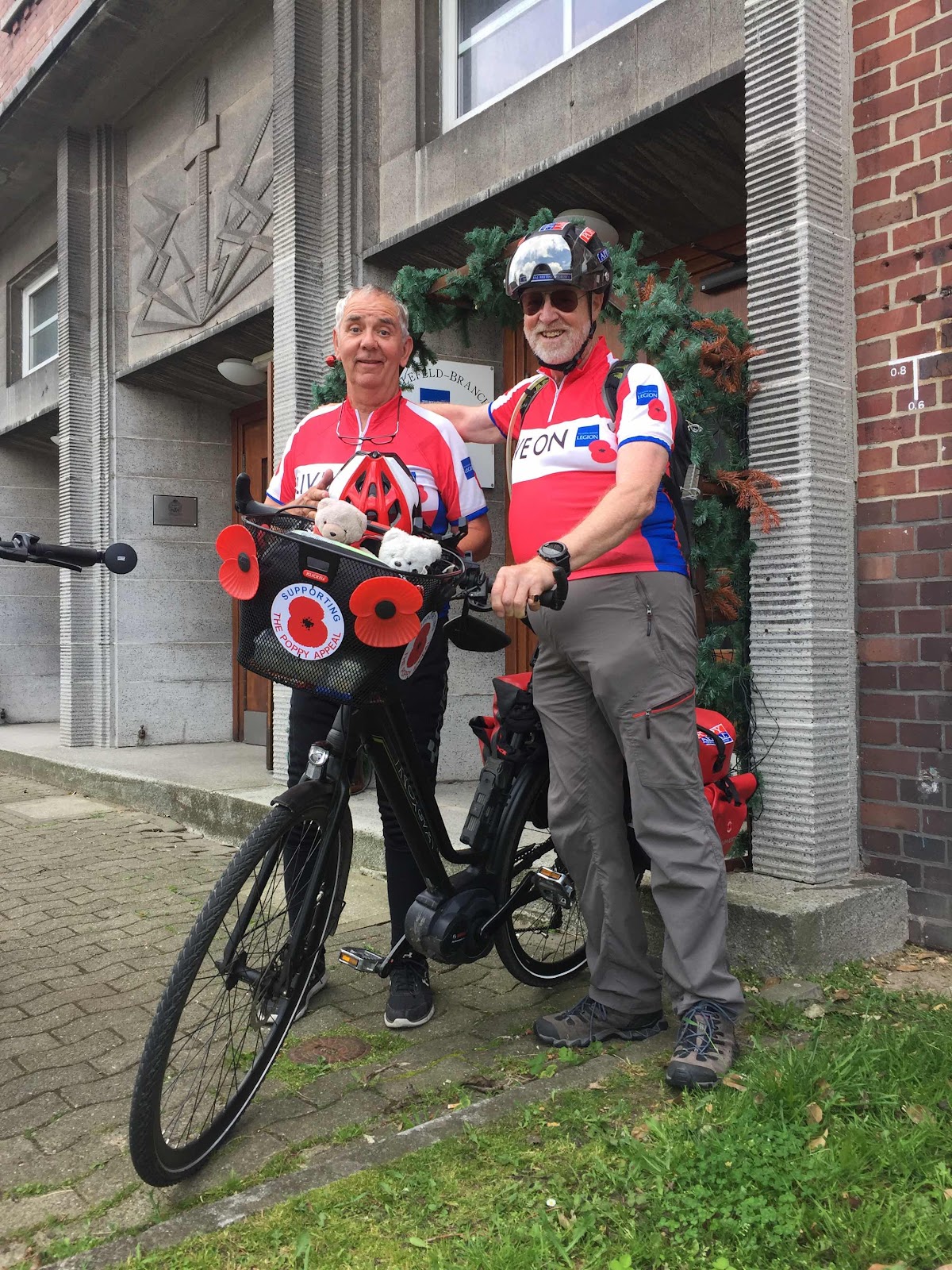 More posing and then our two cyclists were offered a cup of tea by the guards, who were all impressed by their achievement so far! Chris even managed to get one of the RBL Bielefeld Branch members on the phone, but as he lived the other end of the town, no he was not coming out to see them! 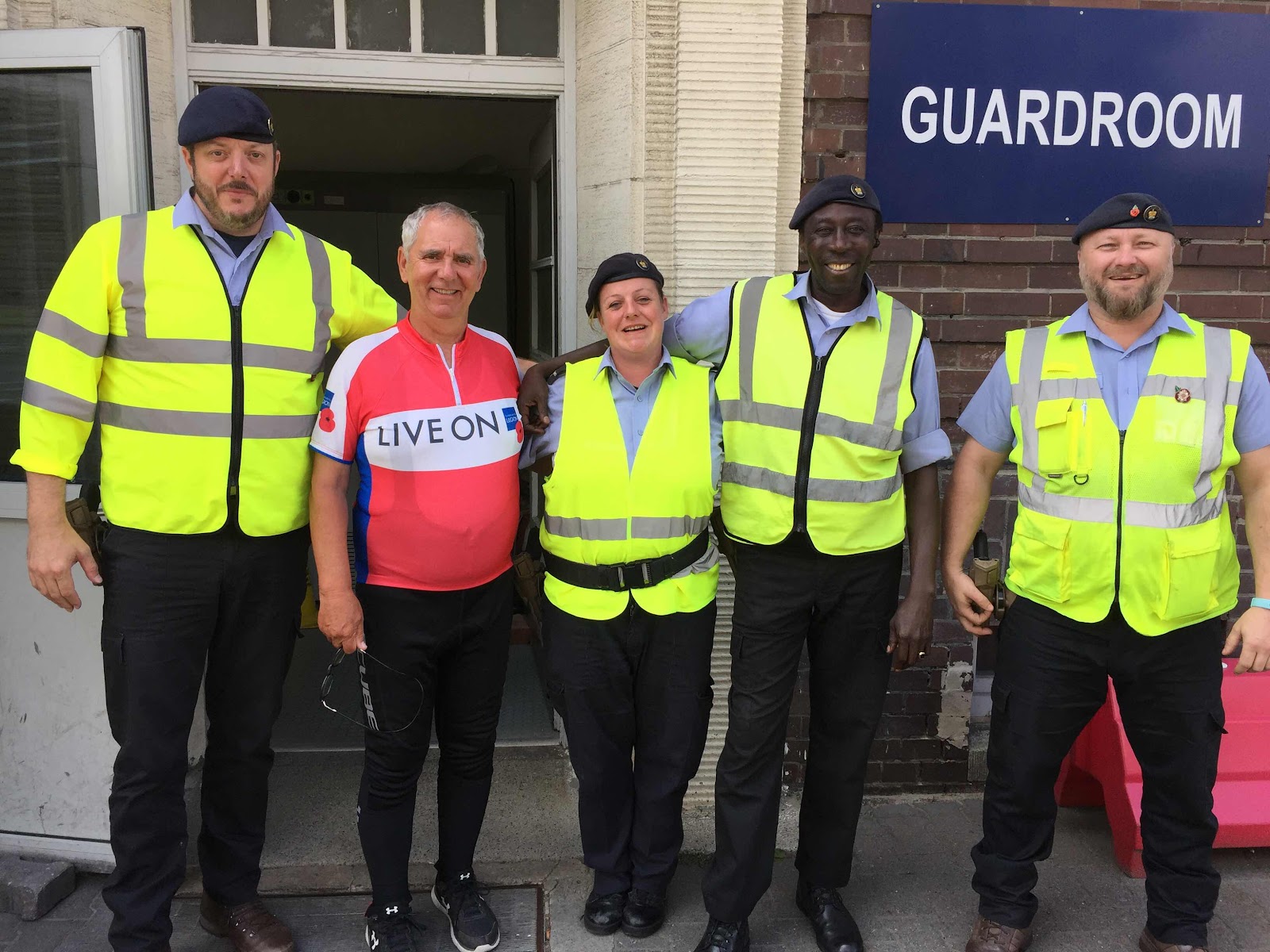 Navi’s were now primed with the next location as our two old codgers had decided to cycle on towards Lippe to make tomorrow an easier day!
There are no hotels where the humans wanted to go, and in any case they had no intention to cycle all the way.
The only accommodation they could find on Booking.com was in Lage so they made for that town! They arrived at the address, but it was only an office which administers accommodation!!!
Luckily there was a Hotel Route Lage sign where we stopped. Alan found one of the hotels listed on Google and rang them up. Yes they had accommodation and were only a few kilometres away. Using Google Maps we now cycled there. 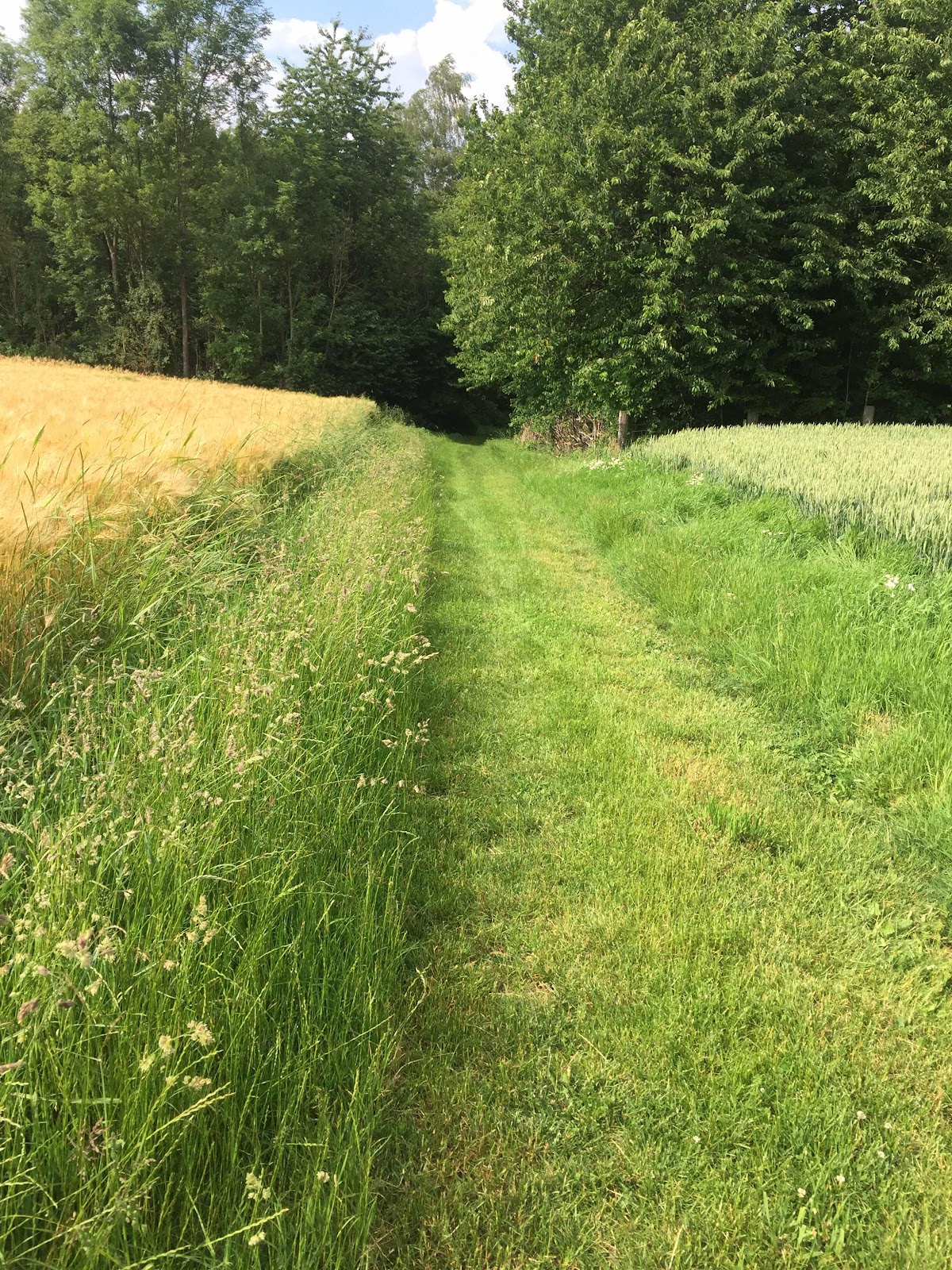 The route chosen was the shortest and took our two adventurers off road!! 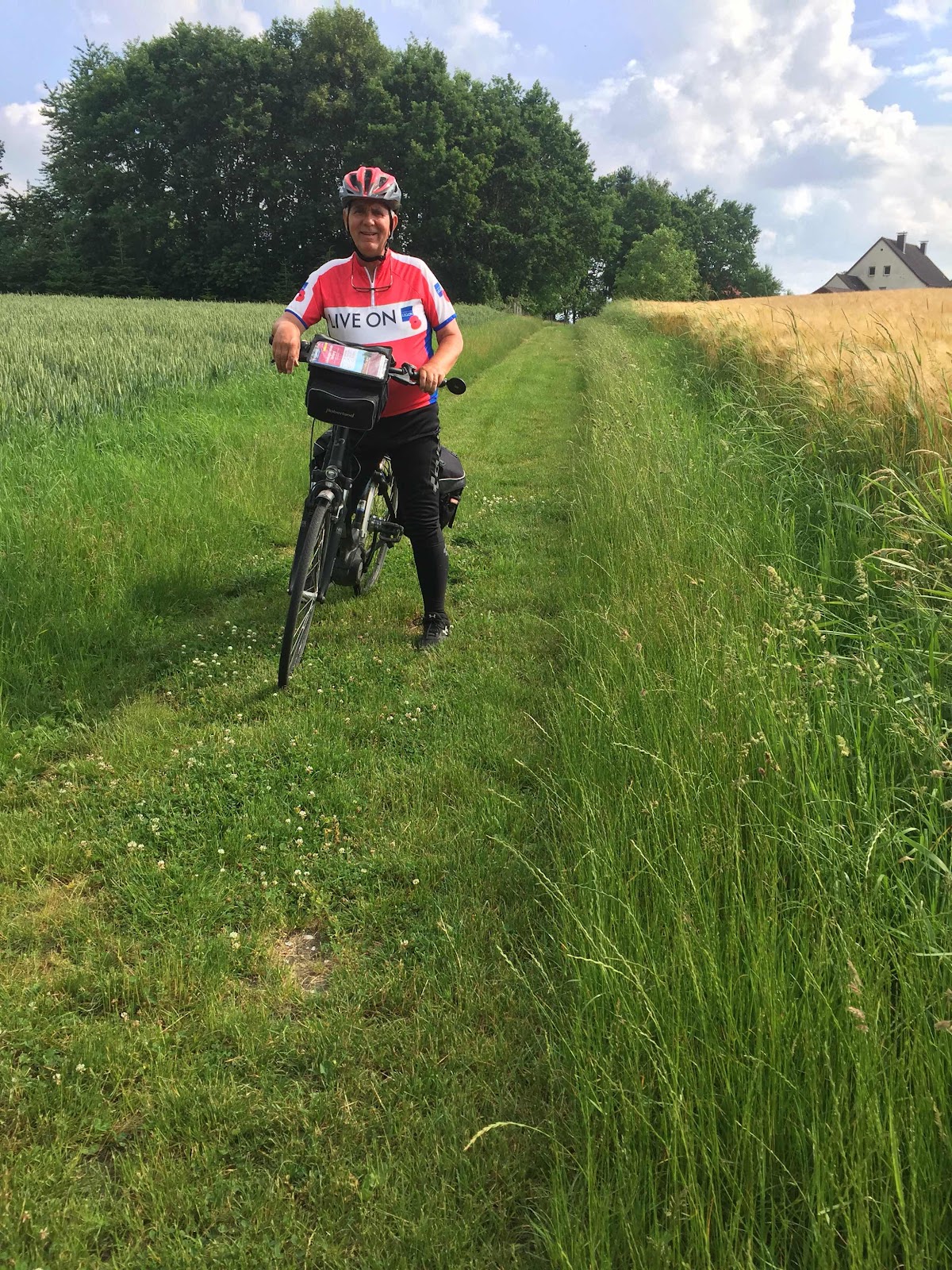 Chris would clearly not have chosen this route, but he went along with it. Little did they know it would get worse before it got better! 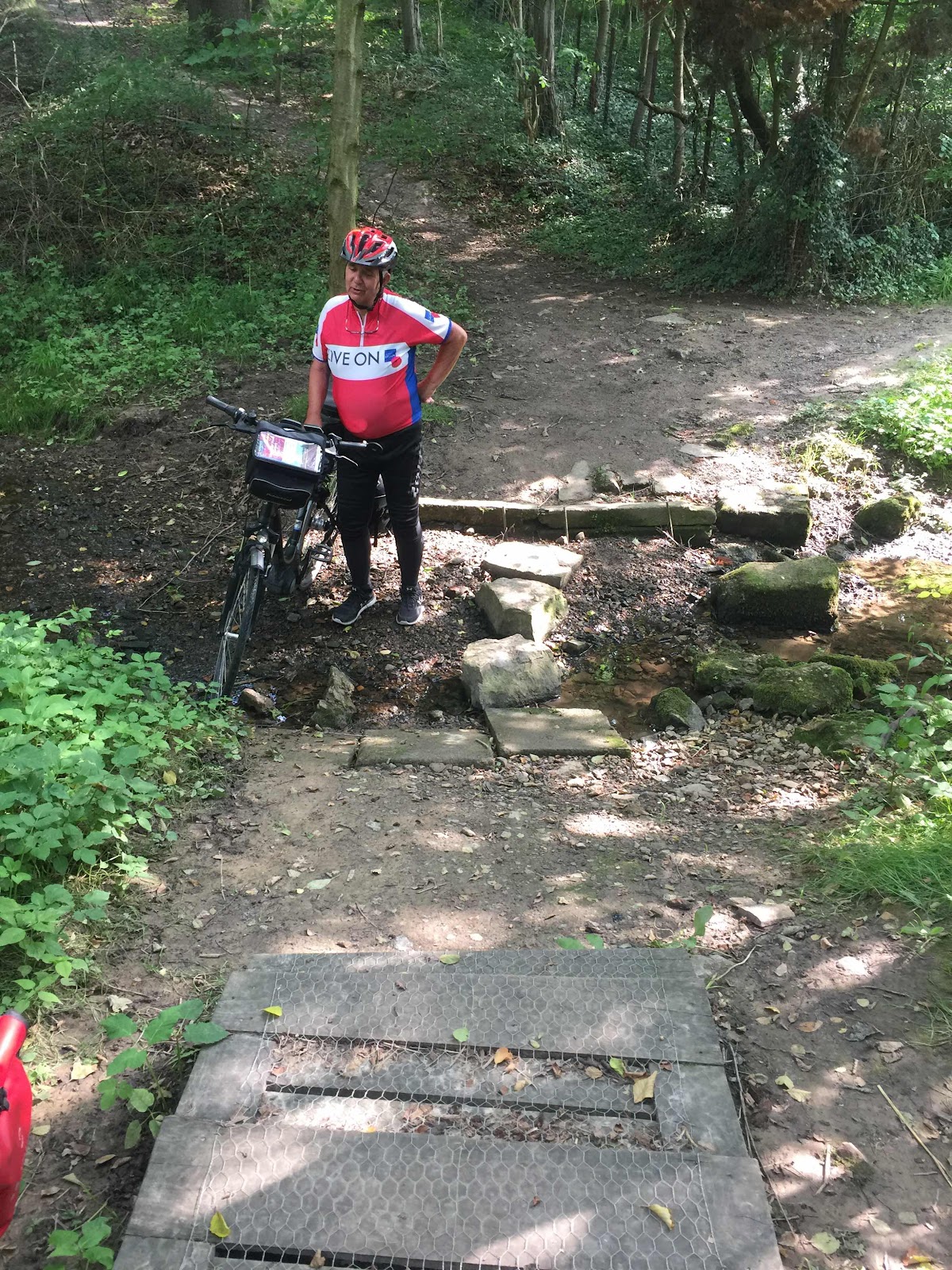 A stream had to be crossed and then a woodland walkway! 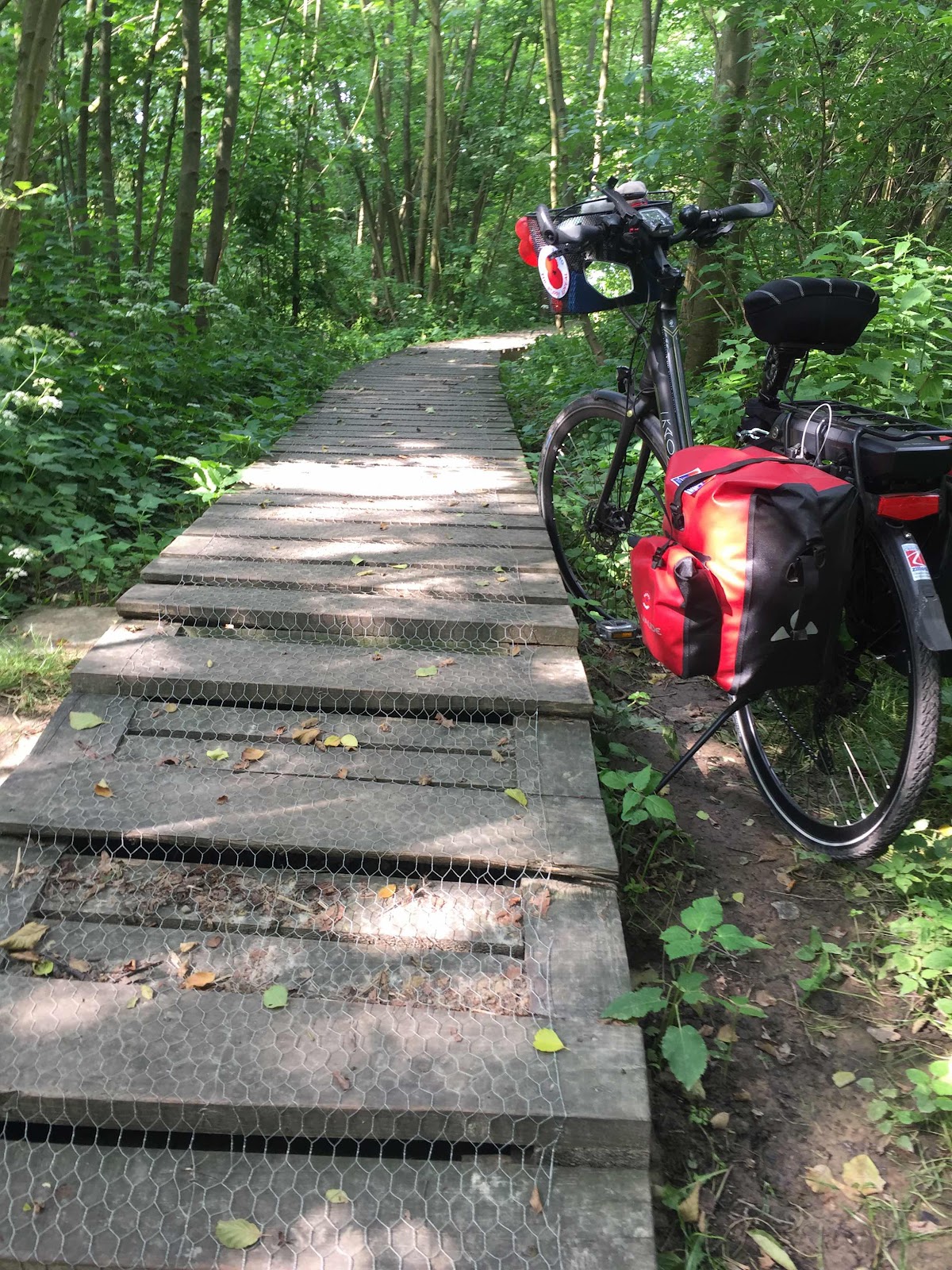 It took two to manhandle the bikes onto it! At the other end was a steep hill and Alan returned to help push Chris’s bike up it. Then they had to push their bikes another 25 metres before the could mount and cycle the rest of the short distance to the Inn!
So folks we are somewhere in the country the other side of Lage and now do not have far to go to meet the RBL Lippe Branch tomorrow!