A hot hill climb to Osnabrück!

The two humans had agreed to meet with Dusty at JB’s for breakfast at 08:00 hrs! Our BBF was the first one there! 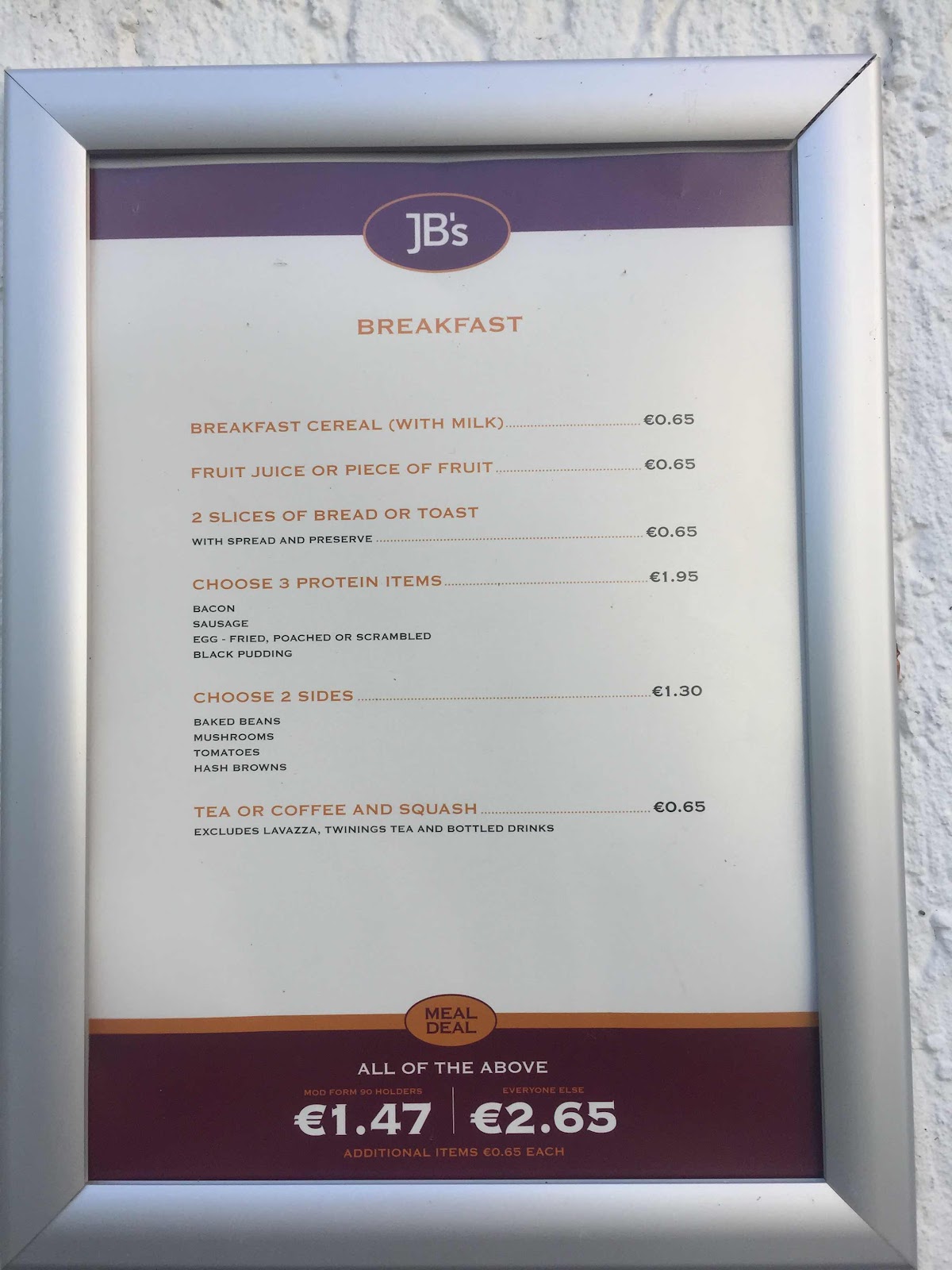 A full English breakfast was eaten by all and Dusty kindly paid! 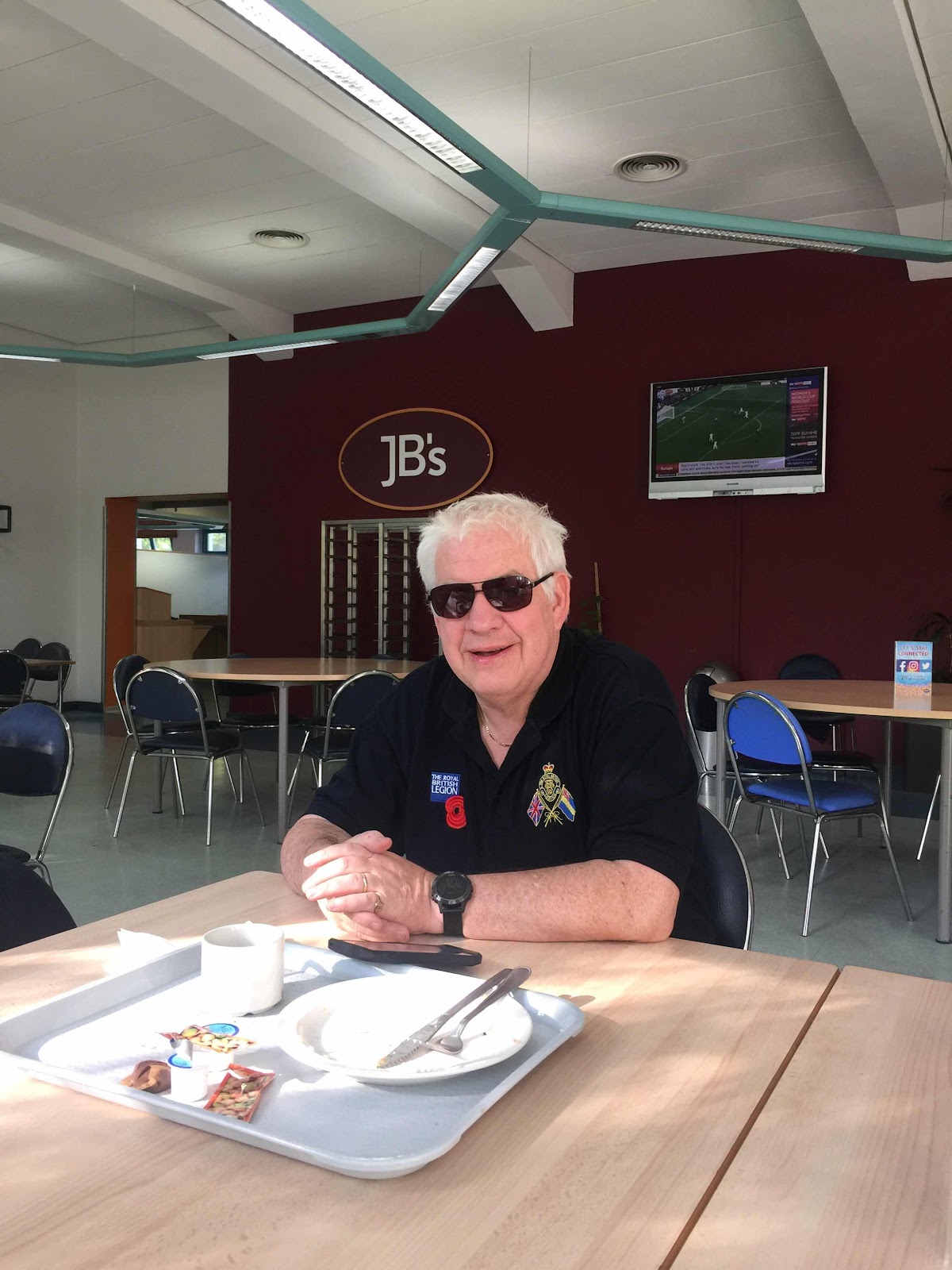 It was at breakfast that Dusty told Alan that we Bears had got a name wrong yesterday in Gütersloh! It was Brigitte and John Doswell not Boswell! We say the mistake is not our but our hard of hearing BBF who should wear his hearing aid more often!
Breakfast eaten kit was loaded into Dusty‘s car for us all to return to Mansergh Barracks, and off we set. When we arrived we were greeted by Mathew the Chairman of the Branch who was once again working.
Bikes were retrieved goodbyes said and off the boys set into a beautiful sunny day, which got hotter as it progressed with not a cloud in the sky.
The route took us along cycle paths which followed main roads or across paved roads through fields of grain. Sometimes there was a little shade to be had because the odd wood was also passed! 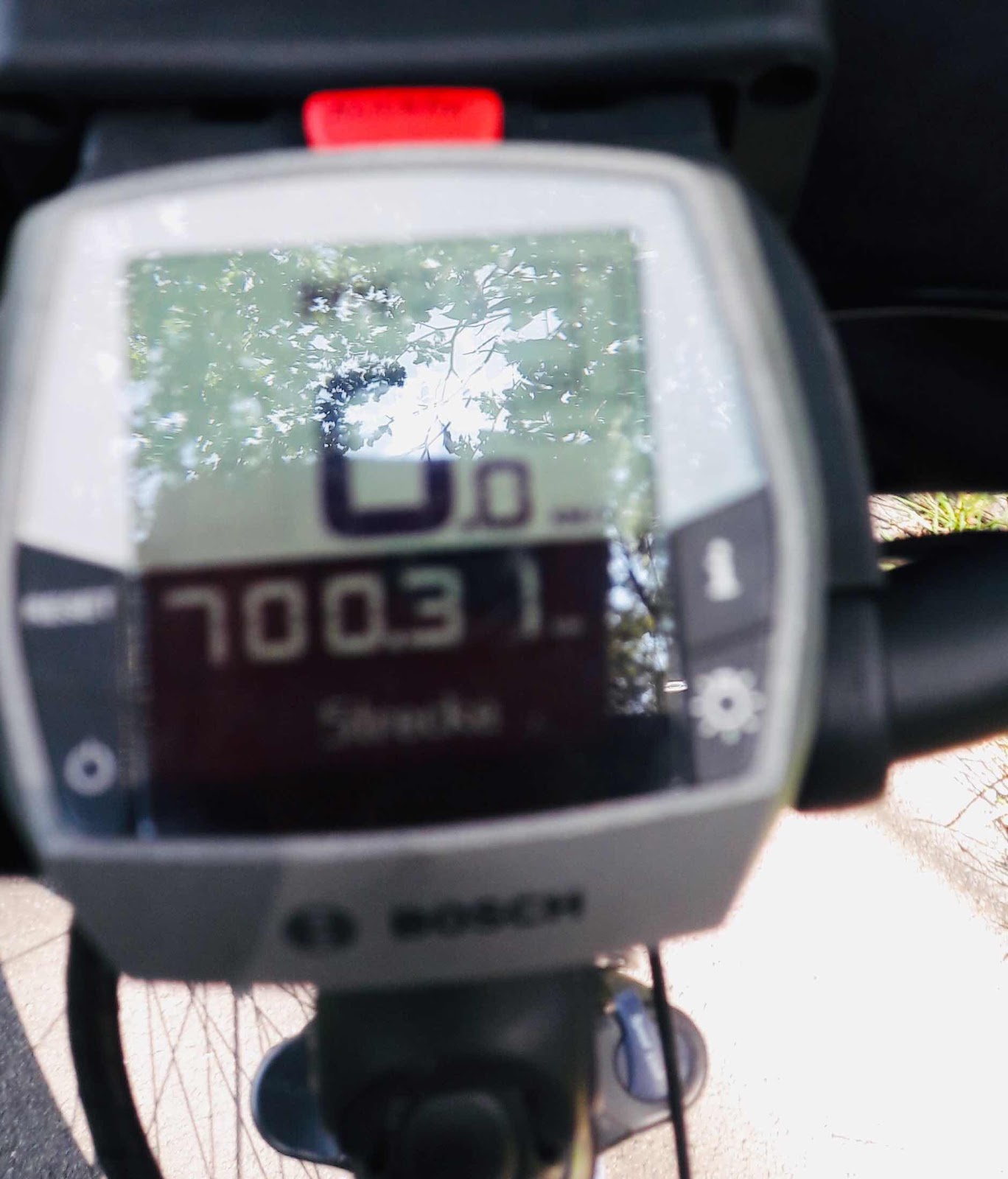 Chris who was leadin and who‘s Navi we were following suddenly shouted and stopped! He at least had now passed the 700 kilometres mark since we started. This included the 15 odd kilometres ride into Mönchengladbach to catch the train! 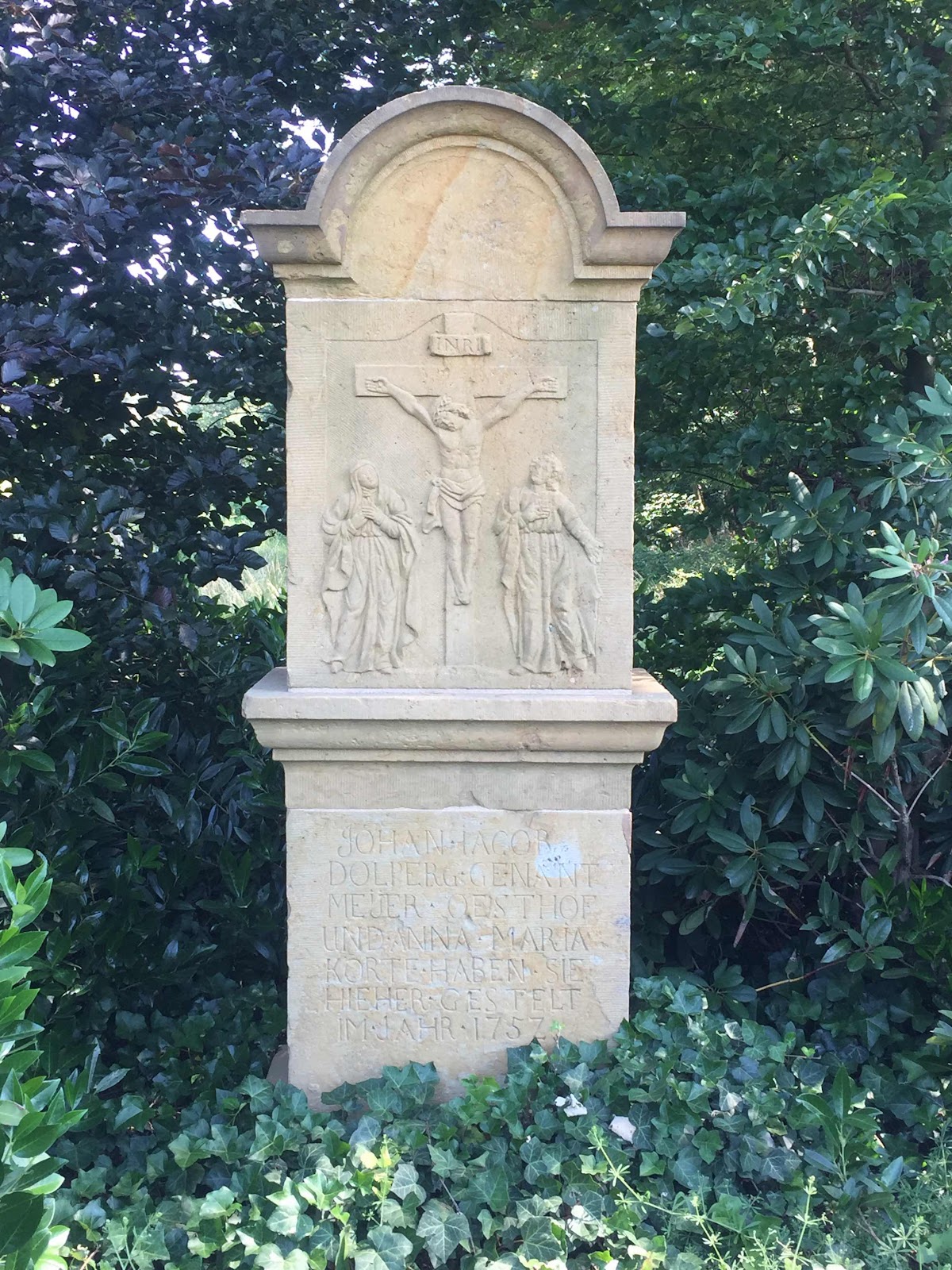 A short rest was had by this wayside cross from 1752! 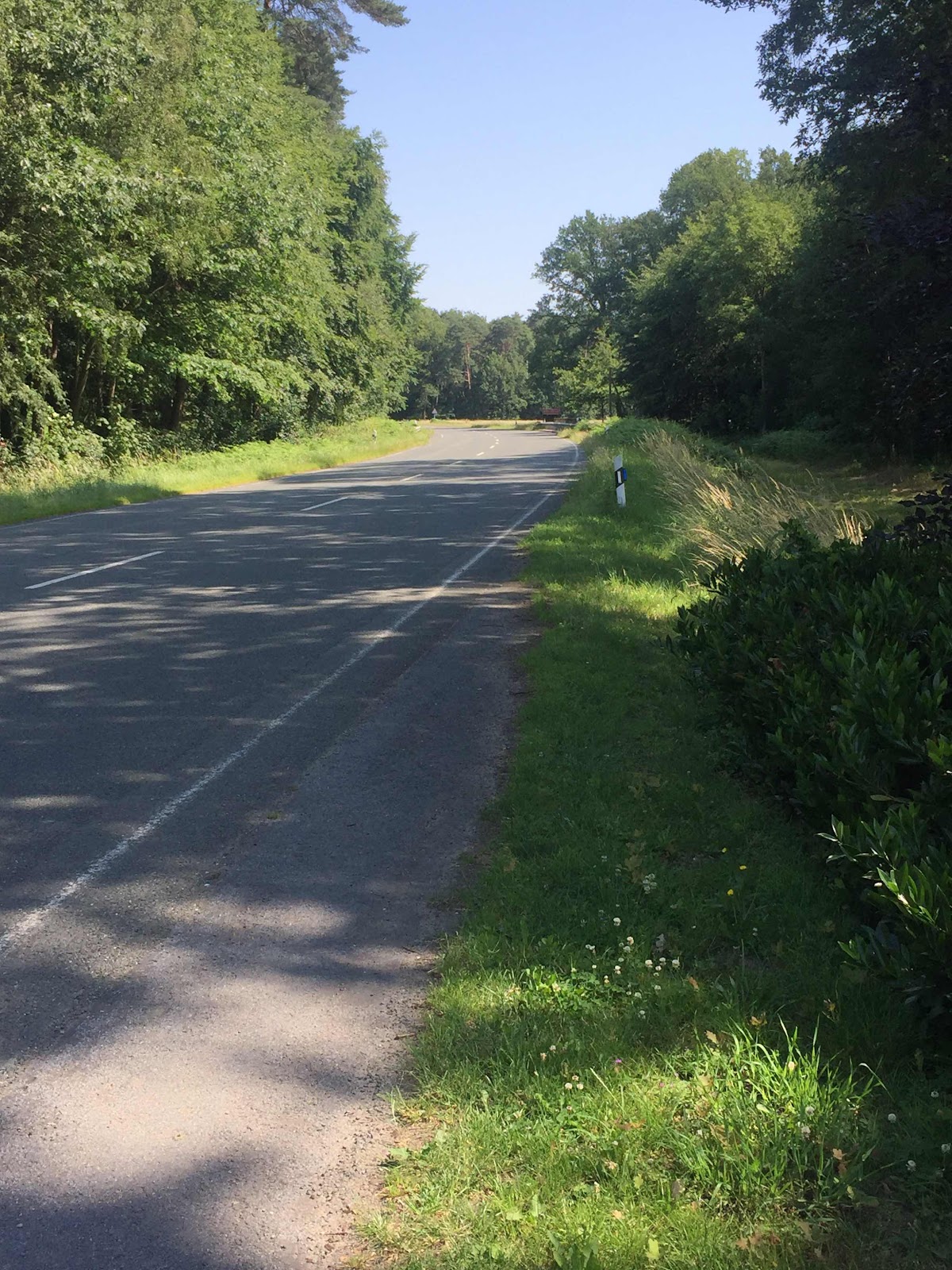 By 12:00hrs the humans were tired and hungry and as luck would have it, a camping site with restaurant was reached so in we went for isotonic drinks and Jäger Schnitzel with Pommes!
Suitably refreshed the boys continued on our journey. 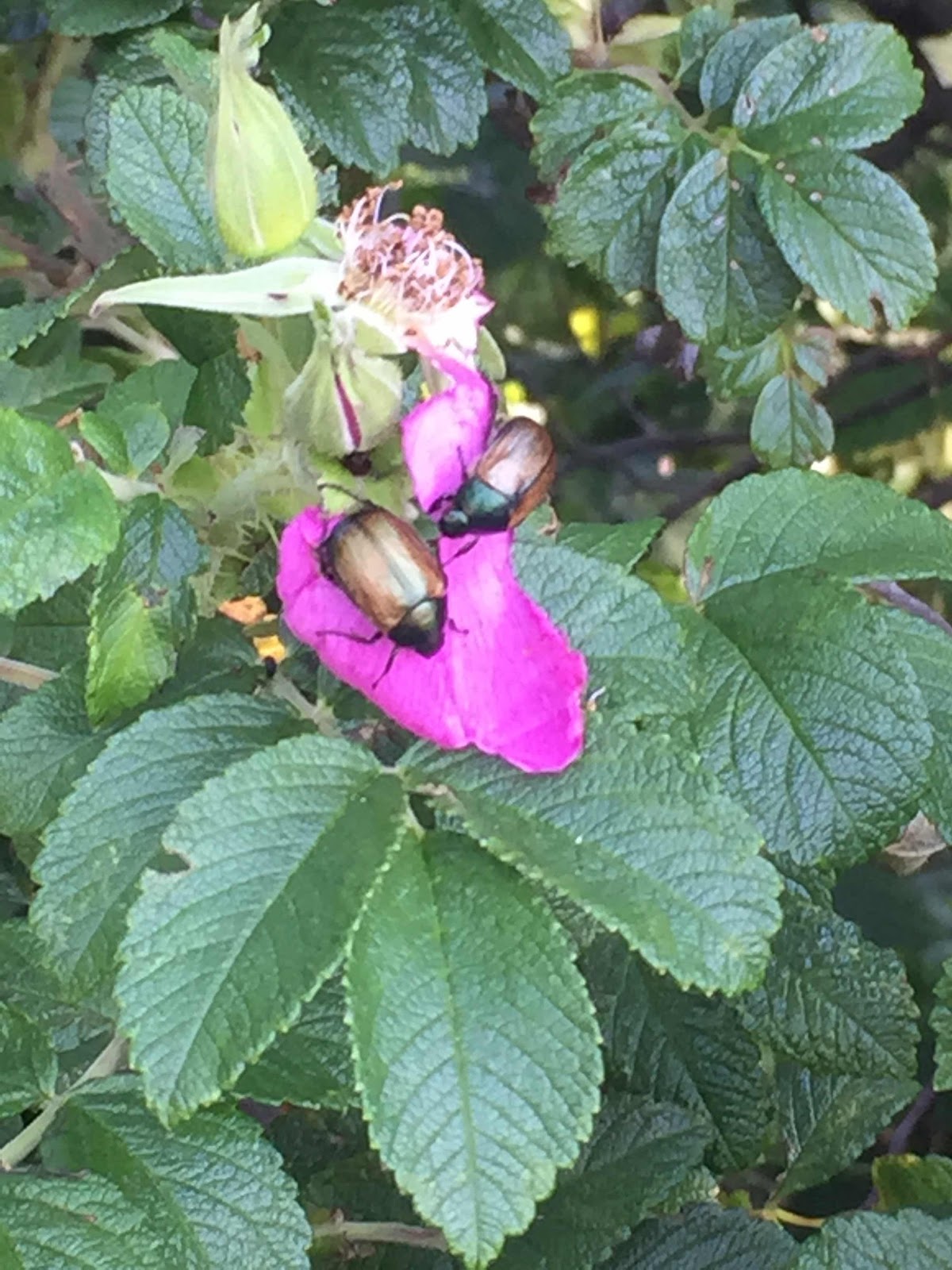 Occasionally Chris‘s phone would ring so we stopped to answer it and this is when Alan was able to take this photo. 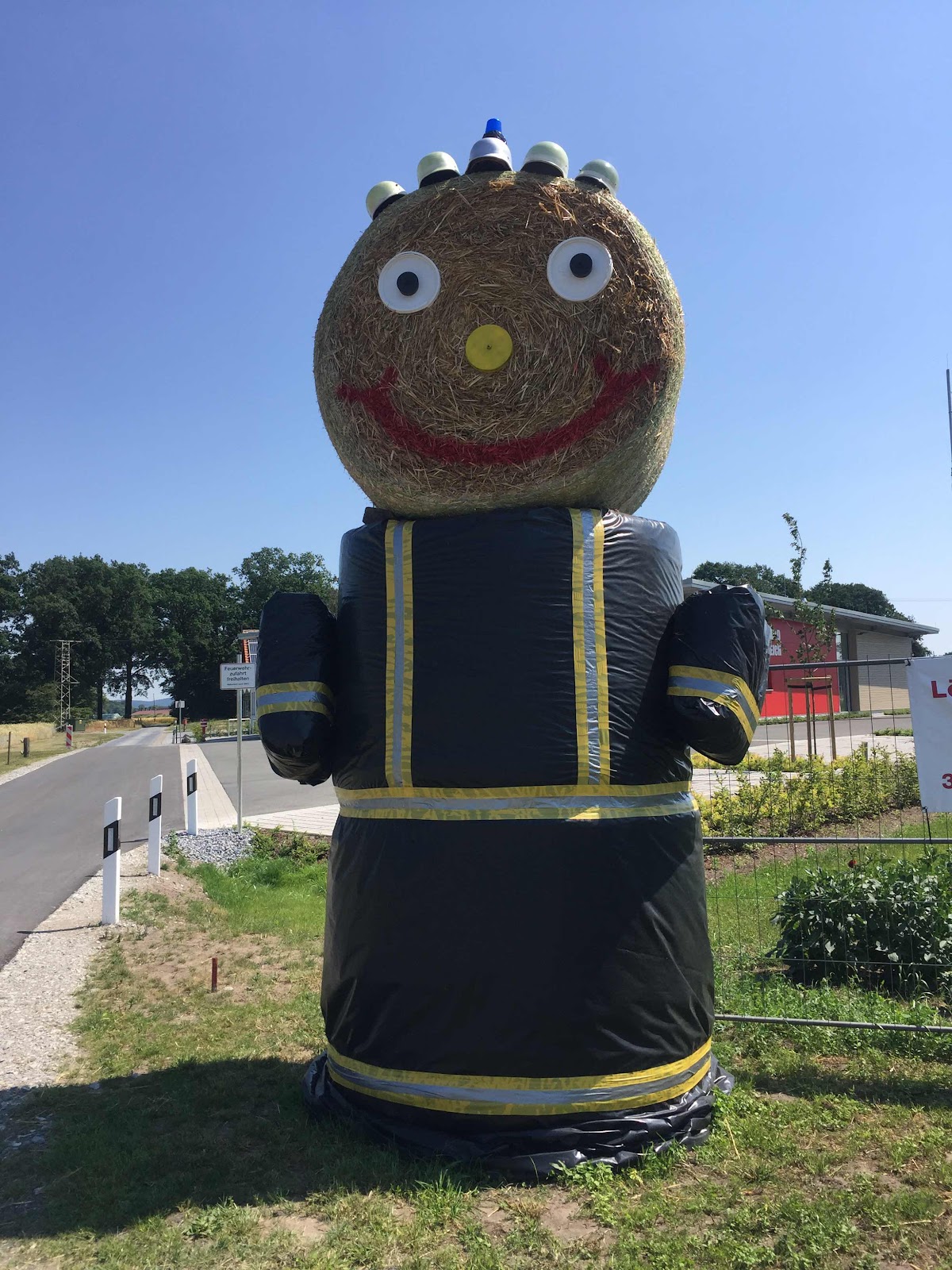 Then again he would stop just to take what he considered to be photos of interest! 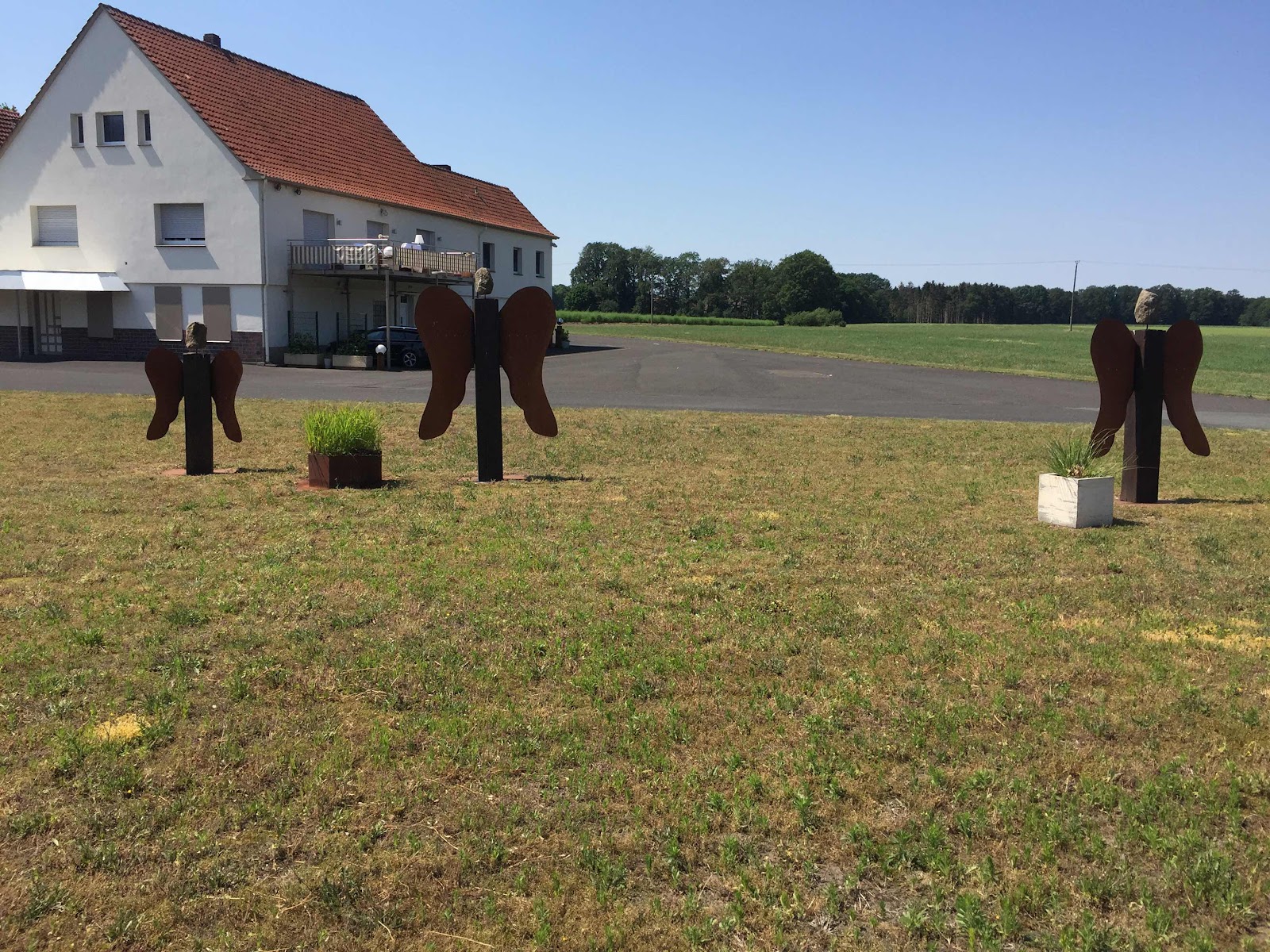 He was also worried about his iPhone! At lunch he had tried to take Chris‘s photo and the phone seized up! It got awfully hot and was trying to reboot itself, but even that was frozen!! When he reconnected the phone to the bike he discovered that it had discharged itself from 90% to 1%! Fortunately it began to work again!
As Osnabrück got closer the going got steeper. In fact the boys had to cycle up and down almost as much as a fiddlers elbow goes up and down! The down bits are what we live for, as we just love the adrenaline rush. Chris said Safety first, Alan replied, but I’m here for the thrill! 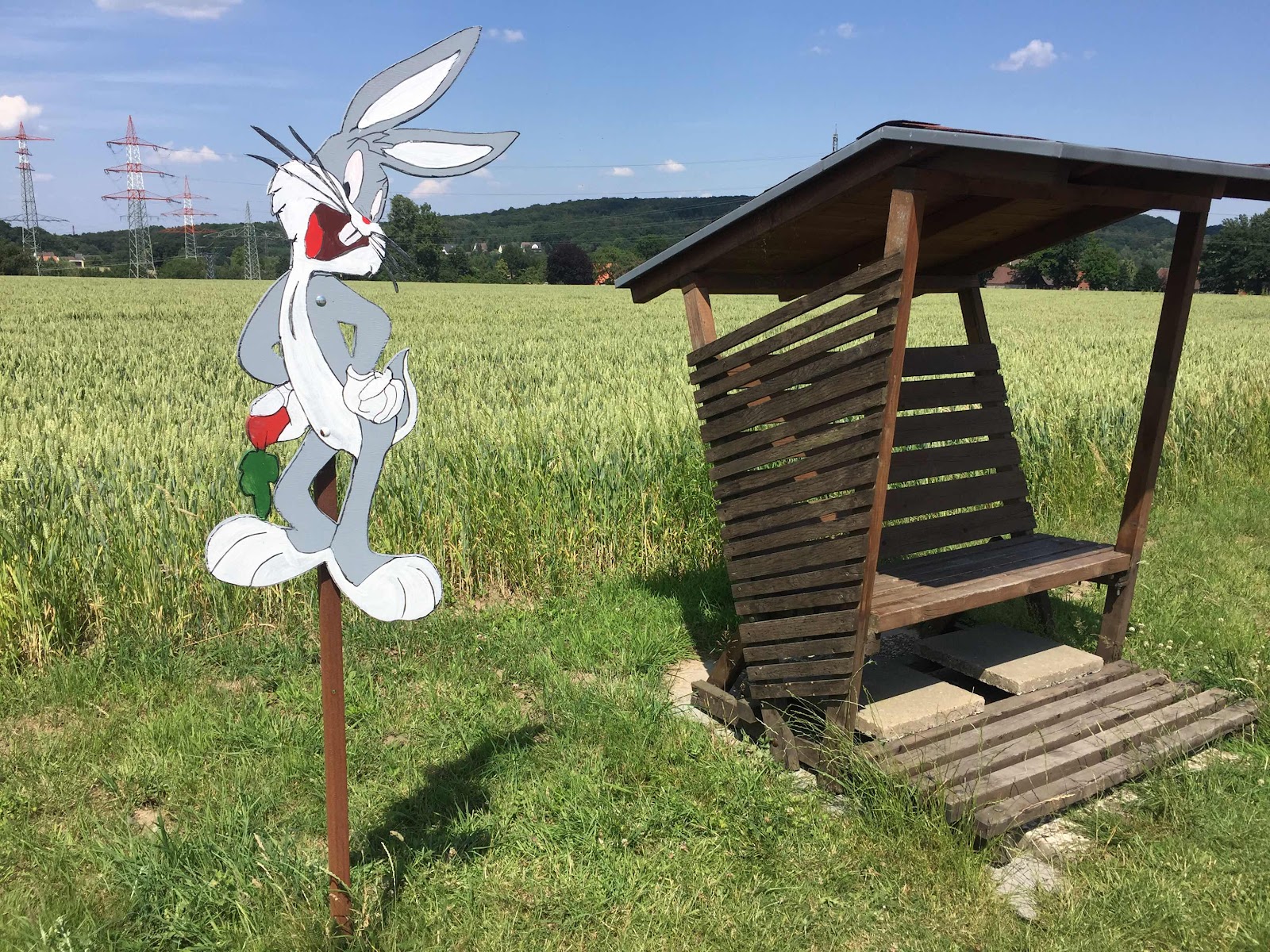 Coming into Osnabrück it was now quite warm and when Chris spyed a McDonalds they stopped for an ice and a strawberry milkshake.
The local RBL Branch was soon found and we were warmly welcomed by the chairman Peter Doyle. Isotonic drinks were given to our two thirsty humans! 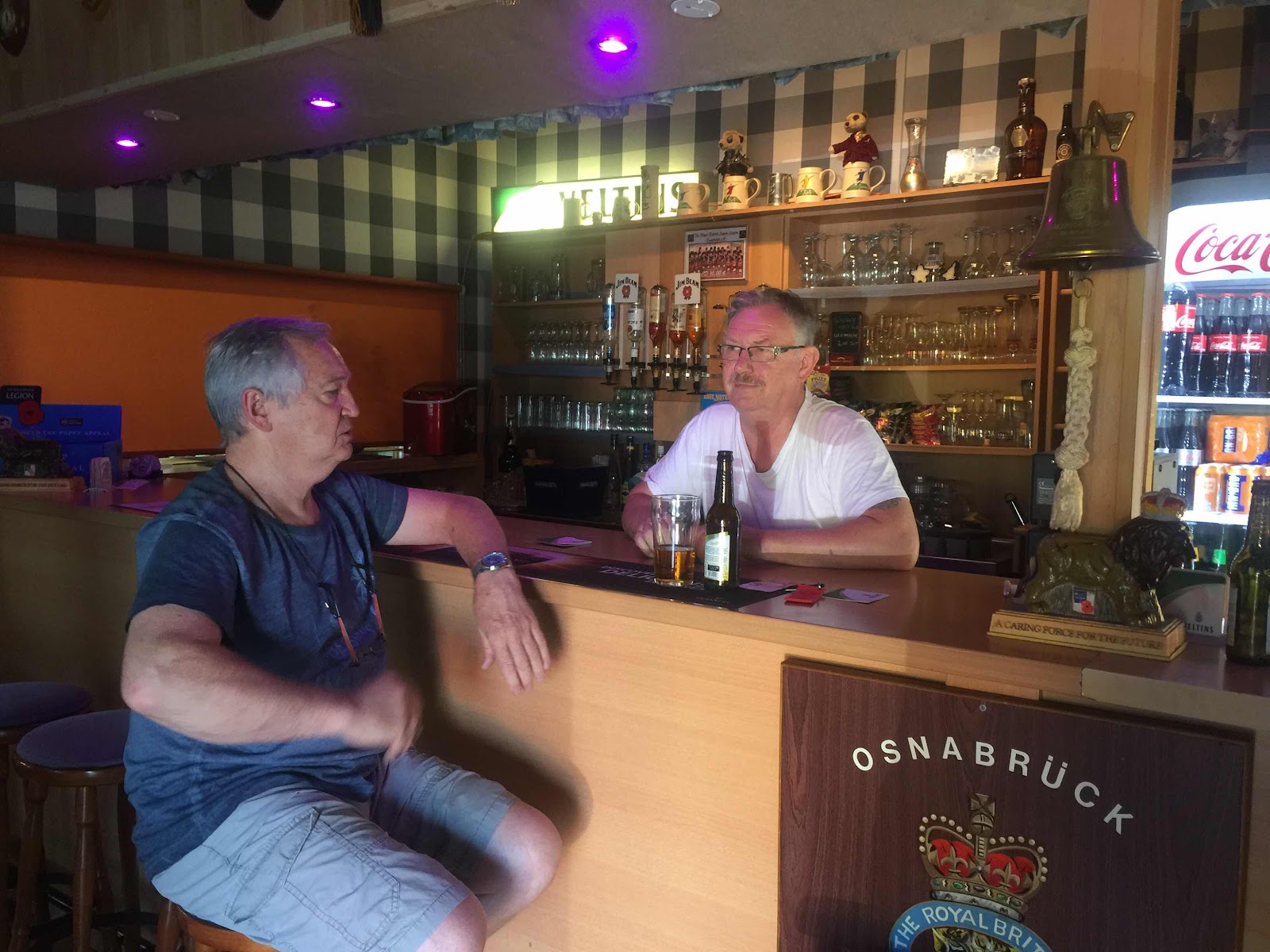 The kind man sitting at the bar bought our pair a second isotonic drink and volunteered to take the official photo outside by the Branches Brass door sign. A number of male members also got into the picture!
But now when the phone was returned to Alan it was trying to reboot itself again and these photos have been lost!
We are now in the Park Hotel which is at the end of the road where our BBF lived when he was stationed here in the 70‘s! He was assailed again with lots of memories of his time here as the Staff Captain A of Osnabrück Garrison! As it was the time of WIDE HORIZON when the MOD tried to do away with Brigades our Garrison Headquarters was also Task Force DELTA Headquarters and then he was the G3OPS! It was a busy but fun time!
Tomorrow we head for Munster!
Posted by Alan Tyson-Carter at 18:58