Last night our BBF wanted to watch the final of Let’s Dance, so after dinner he retired to the room and sat and watched it, while we Bears wrote the blog!
It had been a another strenuous day for the humans and Chris was the first to retire. Alan turned the TV down, but he never made it to the end, before he to succumbed to the need to sleep!
This morning the humans woke at 07:00 hrs and were fit and ready to rock and roll after a good breakfast!
The day, however, had other ideas. To start with it was grey and overcast and it tried to rain a bit! This forced our human to put the rain cover on his helmet, us in his pack and then the rain cover on his pack!
Fortunately the drizzle didn’t last and so the two humans set off on their journey! Bad Bodenteich was where Chris wanted to go, but Alan thought they could cycle on to Sunderburg which is what he had programmed into his Navi!
Though grey the day was fresh and clean with the scent of Linden Blossom on the air. 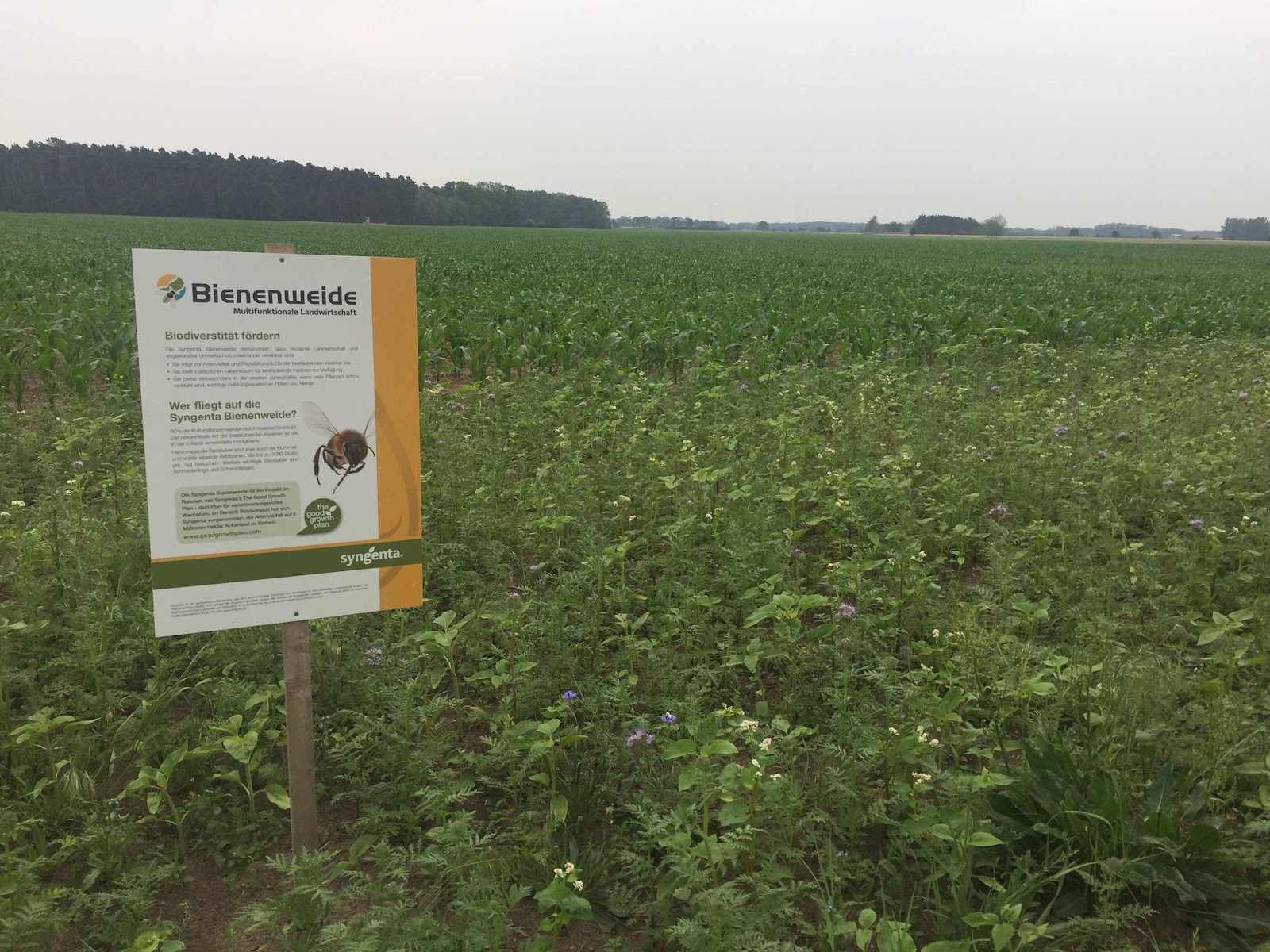 We passed fields where farmers had planted strips to encourage and help bees. 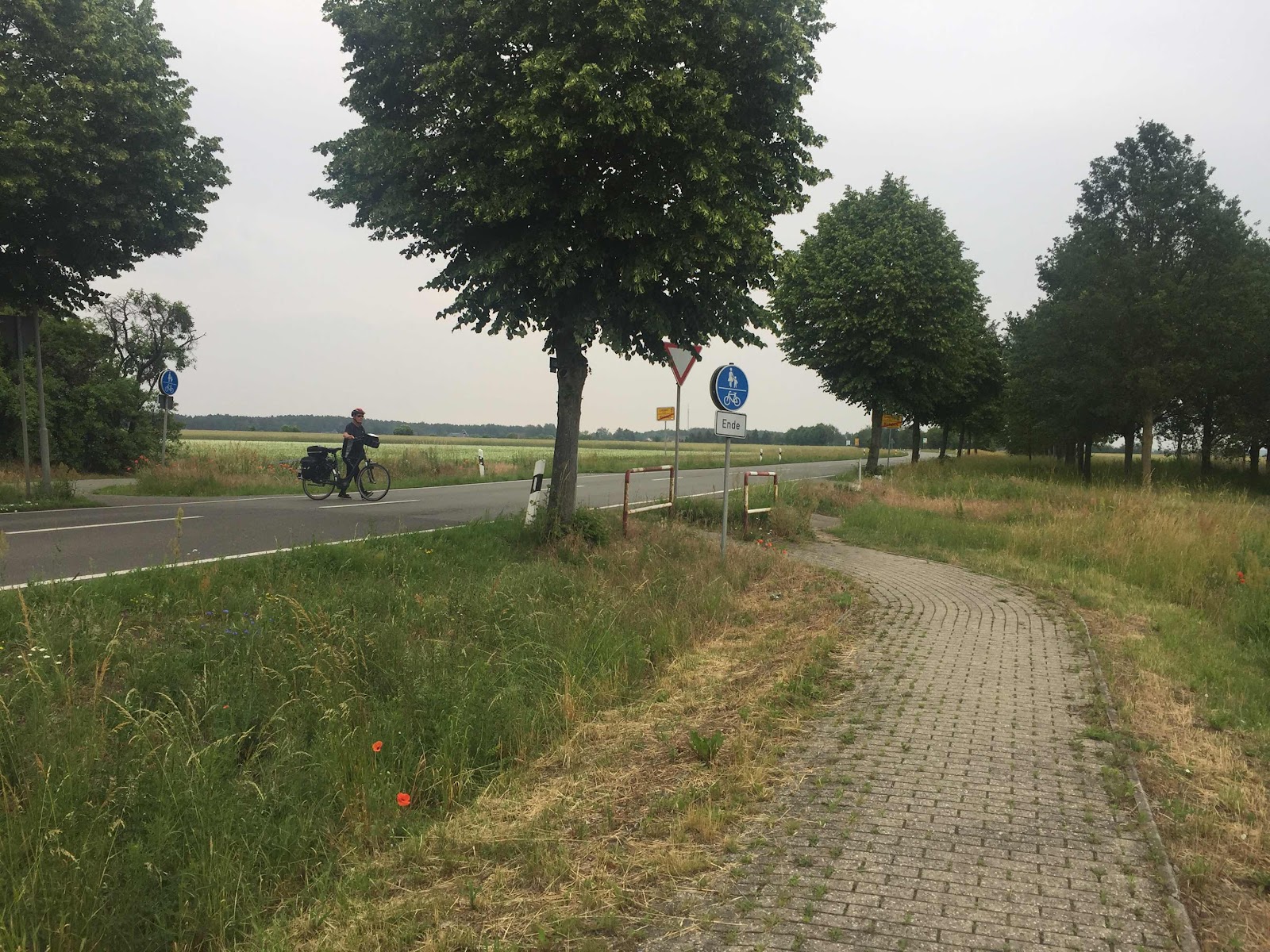 The route today seemed a steady up hill one, sometimes with long dragging hills at others with a short up followed by a short down, and then another up and down. 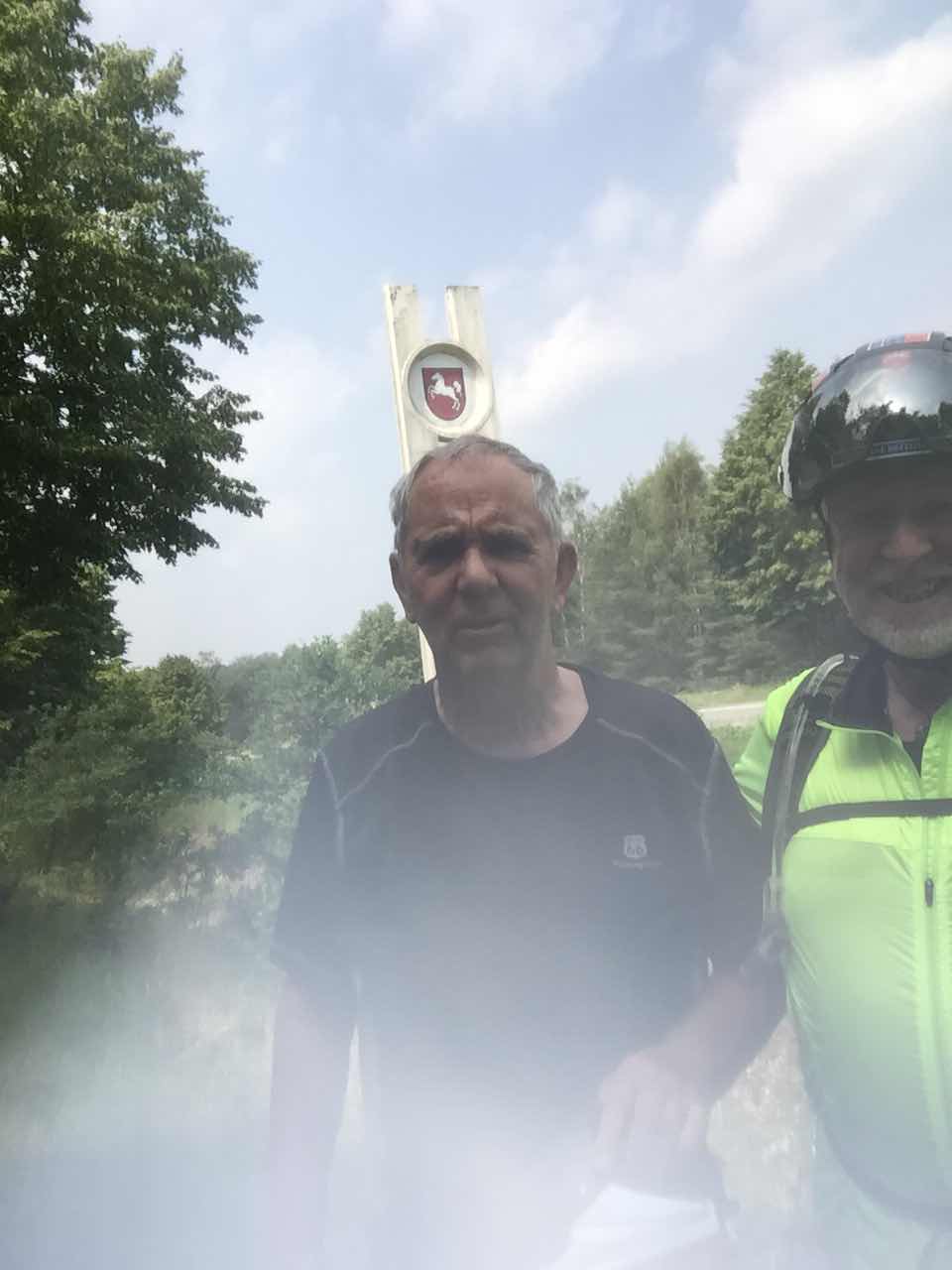 We came to a large white pillar which indicated the border between Saxon-Anhalt and Lower Saxony! 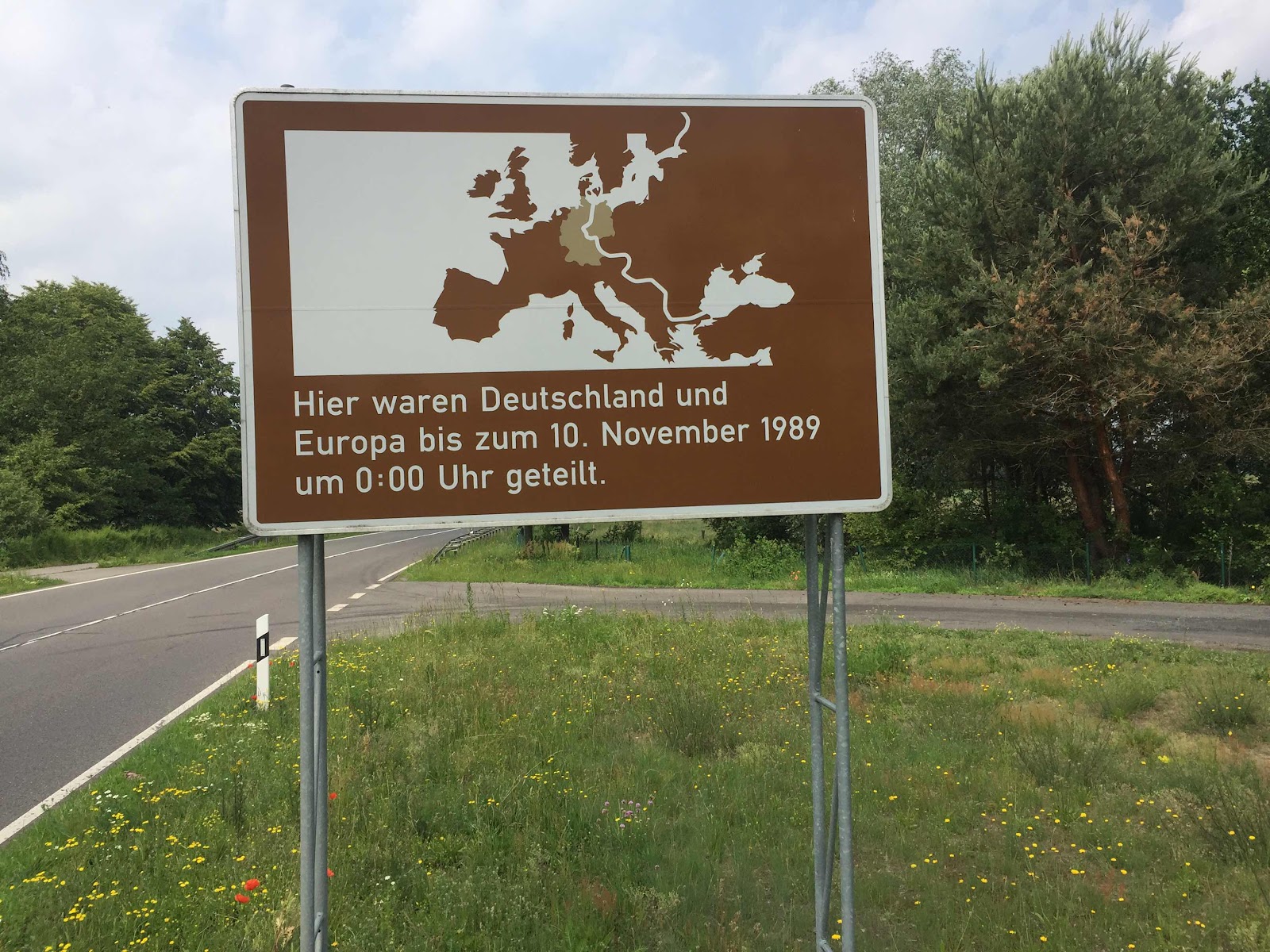 As another sign showed this was the old Iron Curtain Border which came down in 1989.
At one short stop for an isotonic drink the humans discussed how far they could go today. Alan favoured a more Northern route to Sunderburg, while Chris wanted to go the southern way via Eschede. It was decided that they would decide which way in Bad Bodenteich which they hoped to reach around lunchtime!
This is now where our BBF made a mistake. He set off like a greyhound after a rabbit, not realising that his planned route to Sunderburg did not go through Bad Bodenteich!
When Chris realised Alan was off on the wrong track he called him up and we turned back to rejoin Chris.
Now on the road to Bad Bodenteich they met a man who gave them general directions which amounted to, go straight on not turning off at all!
At another junction Alan now made a grave error of judgement! He went straight on instead of following the road round to the left! He saw too, that the path went up hill and into a wood and that the tarmac ended and they would be on Forest tracks. 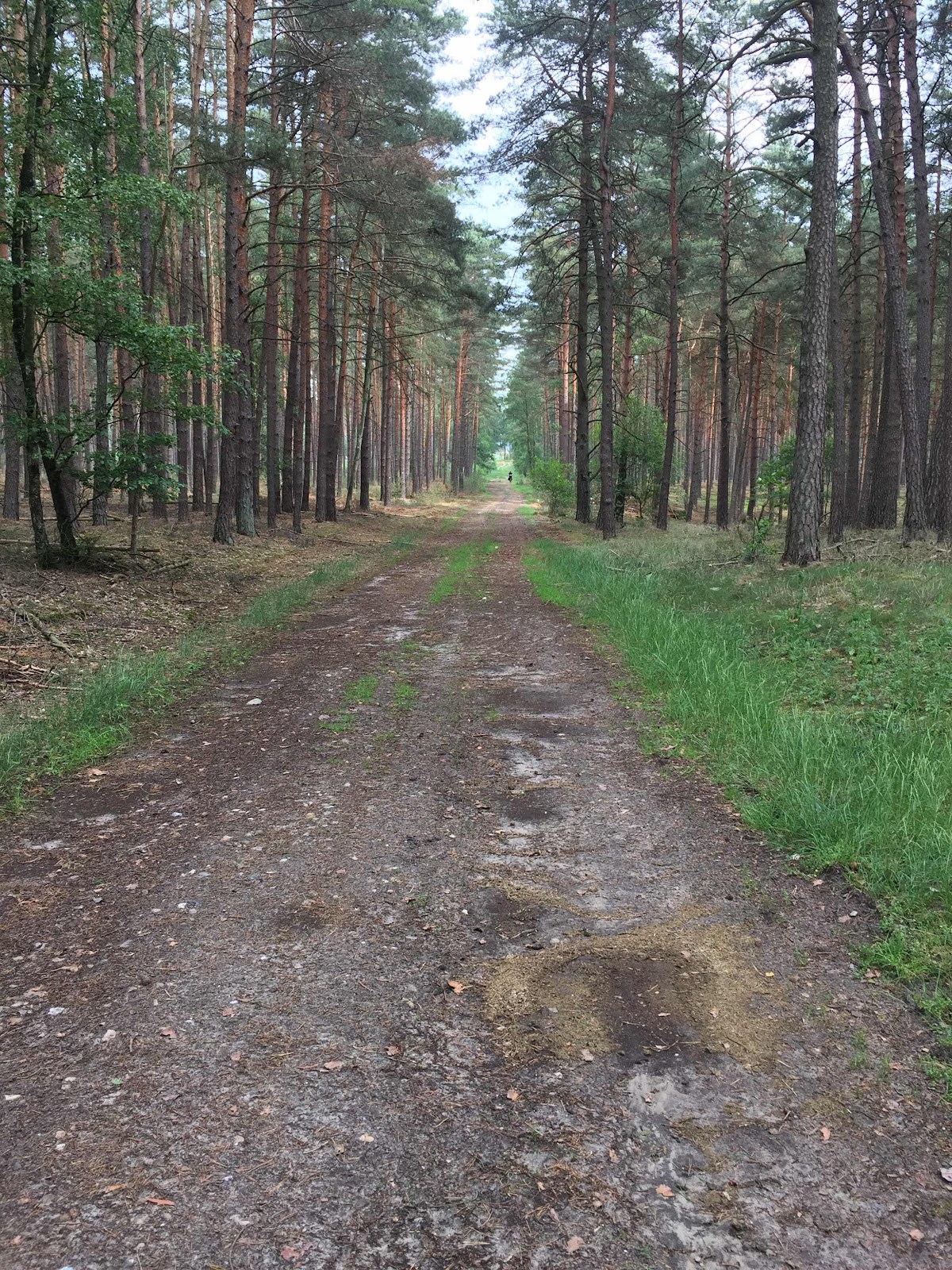 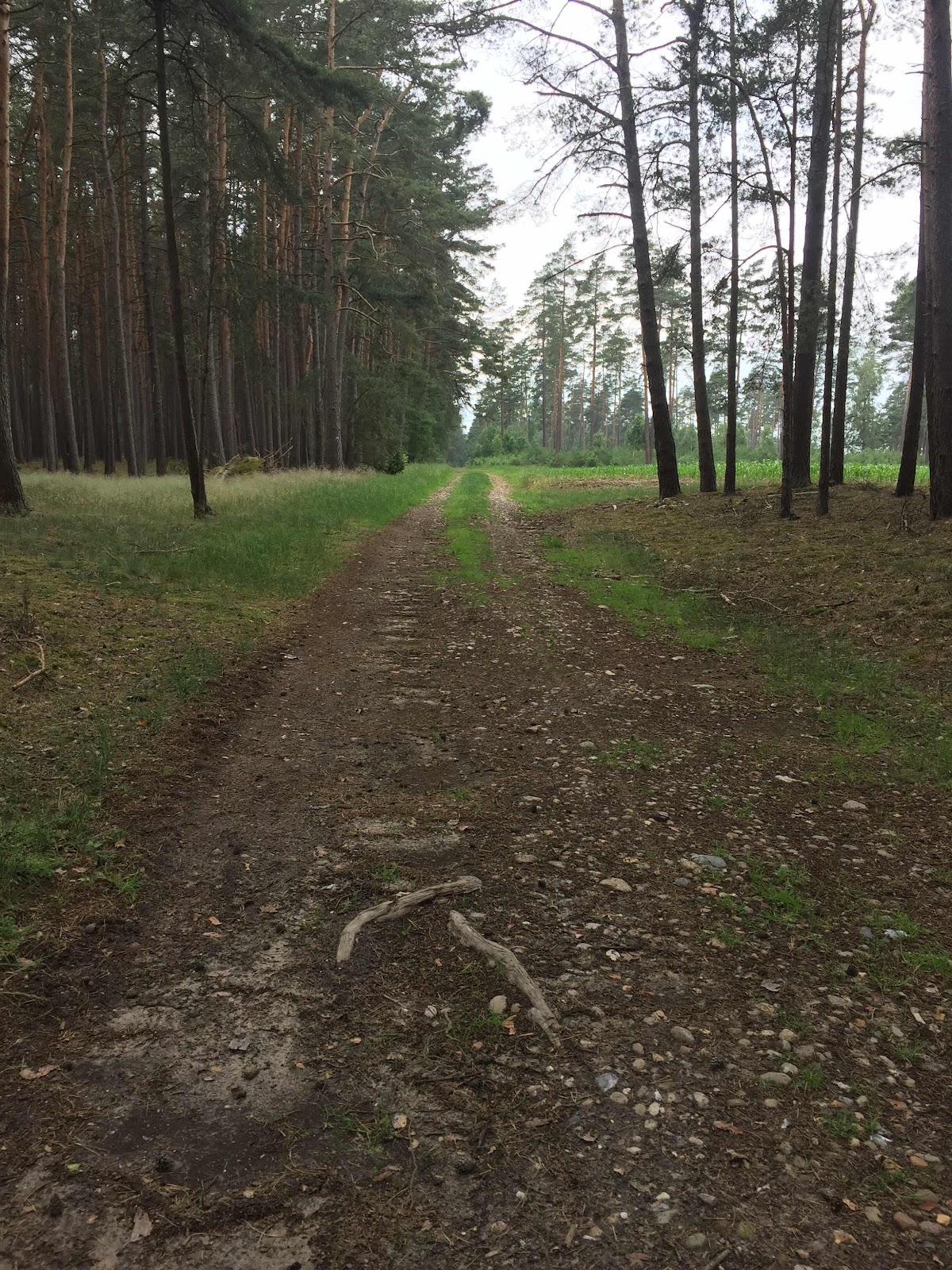 He can be reckless and just forged on. Chris to give him his due followed though he knew it was wrong! The going got tough and both humans were forced by the soft ground to get off their bikes before they fell off! About three kilometres they rode through the wood until they came to a tarmac road again! Chris was rightly angry and told Alan off. They did not have mountain bikes, each had a replacement knee and Chris had a replacement hip as well! To fall off their bikes would be a disaster for them and not to be contemplated. Alan apologised and was suitably humbled by the fact that Chris was actually with his hip and knee 50% disabled!! 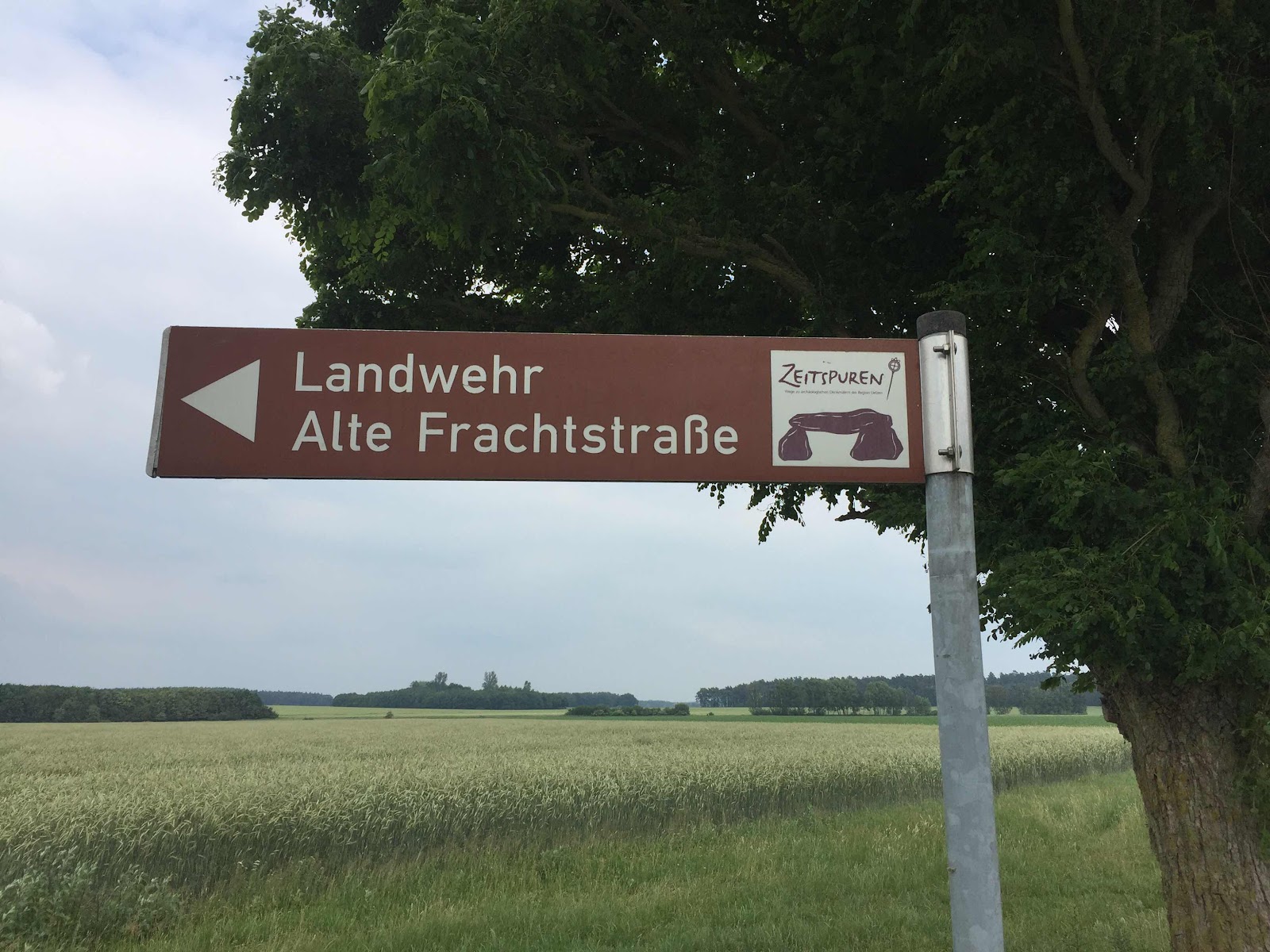 The track through the forest they had traveled on was actually an historic road as it was the old freight road!

Once in Bad Bodenteich we found a nice pub called “Zum Alten Ritter”! We stopped for lunch and large isotonic drinks. Alan charged his bike battery and Chris his Navi. Eschede was the destination it was decided!
The first shock when we reached the hotel in Eschede was that there was no room in the Inn! Using the Bett and Bike App Alan found a  B and B which had two single rooms!
The landlady was kindness itself! She not only provided rooms, but isotonic drinks and a meal! 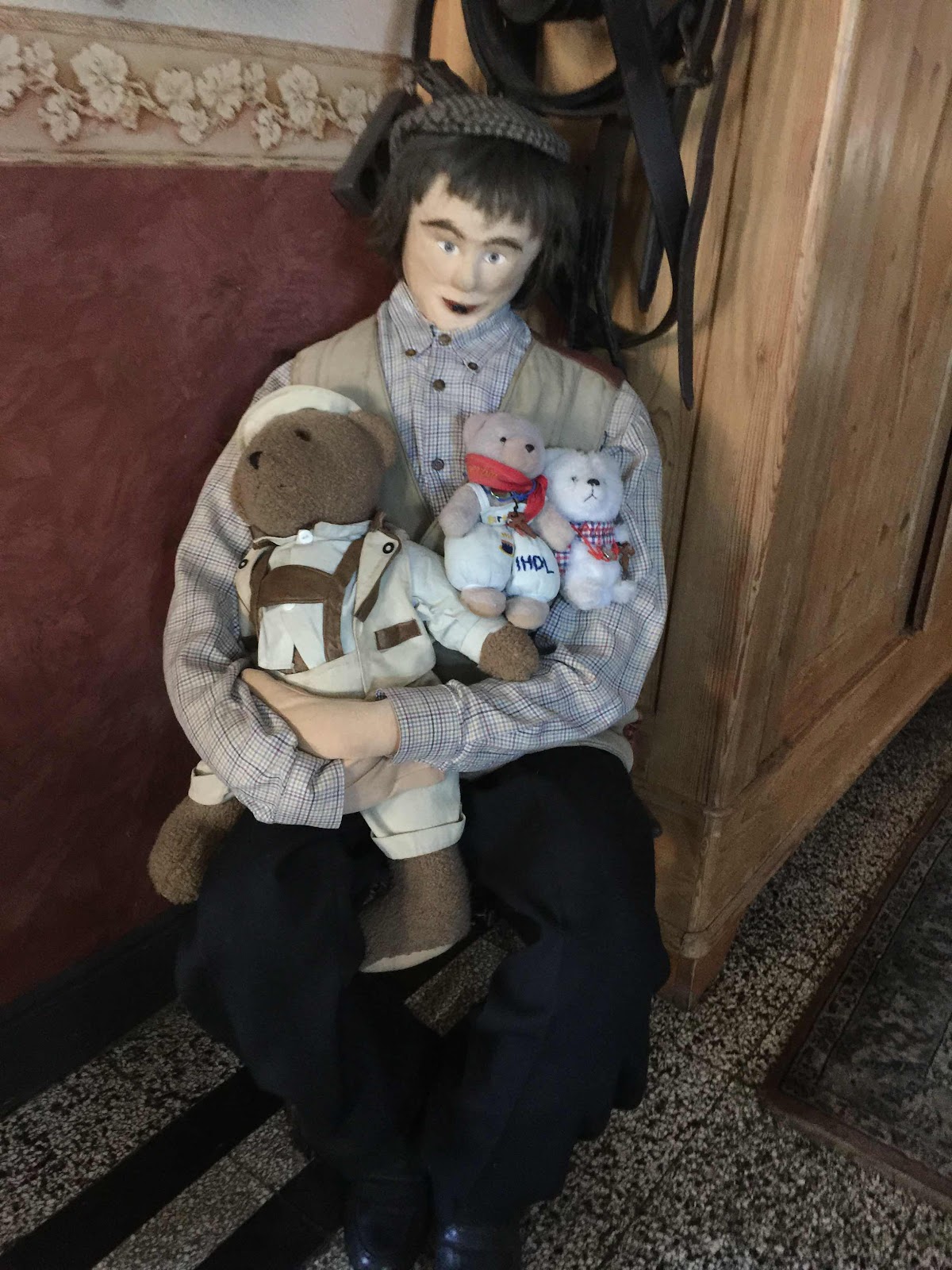 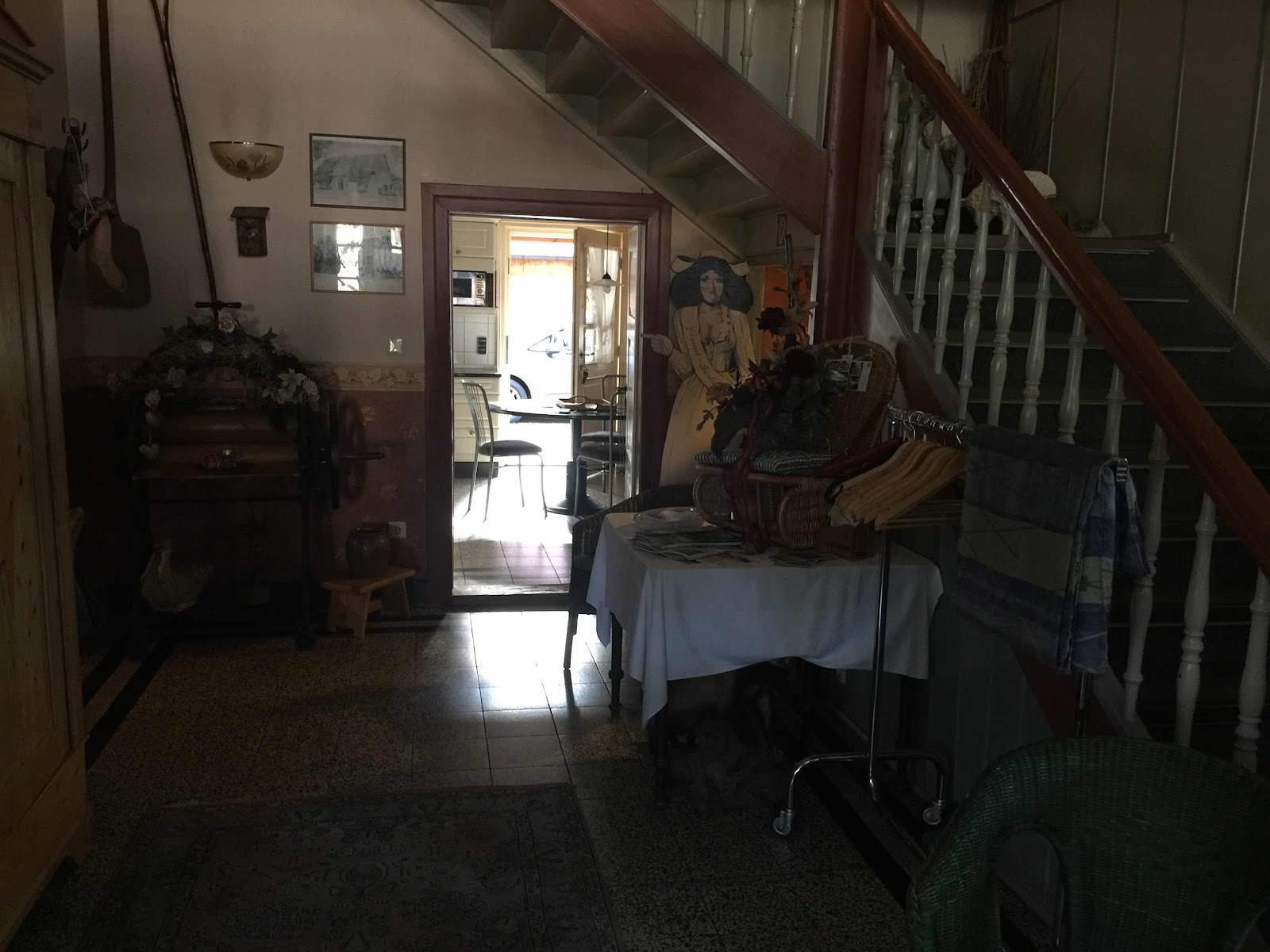 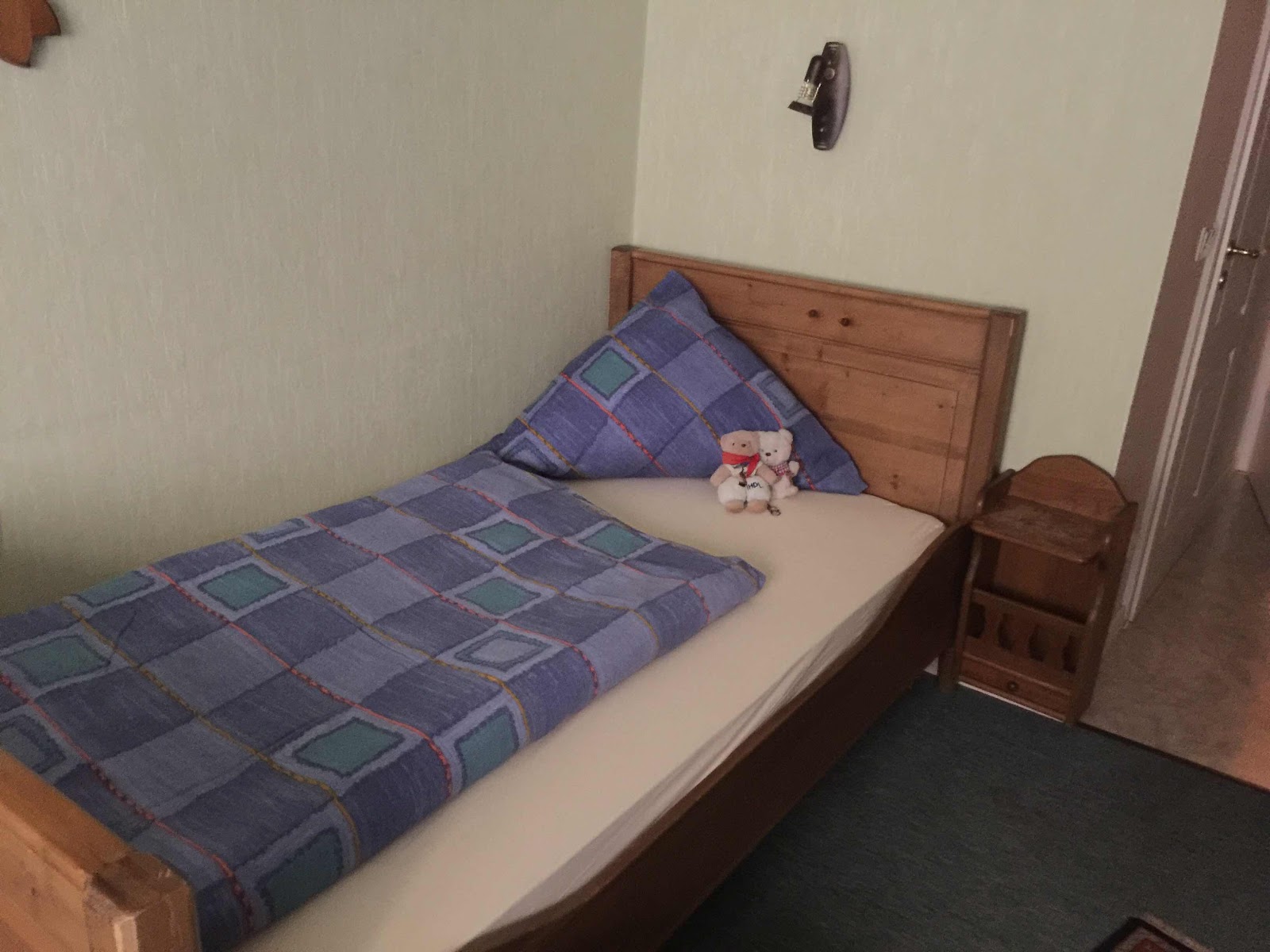 The humans had pedalled over 105 kilometres today! Another personal best for our BBF so all’s well that ends well!
Tomorrow we reach Bergen-Hohne where we understand a lunchtime barbecue awaits us!
Posted by Alan Tyson-Carter at 22:17