Another fun day to Gütersloh 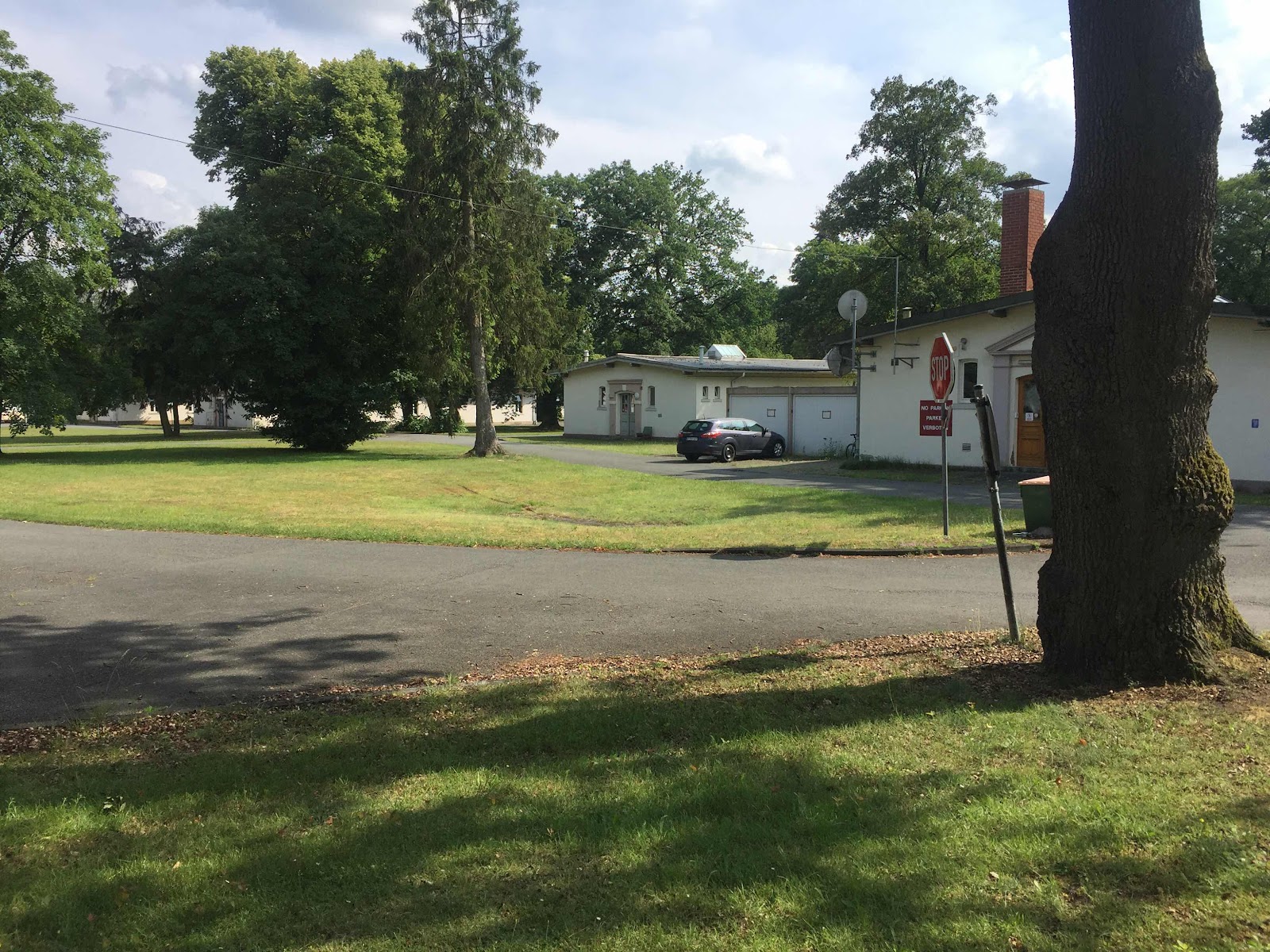 This morning after a good nights sleep the humans left their Block 51 to go to JBs which is the new “Pay as you eat Cookhouse” for breakfast. They met Dusty here, who had ridden his bike in to join our two for breakfast and for part of their onward journey.
We like Dusty because he has a wicked sense of humour, so the conversation was warm and funny as always when he is about! 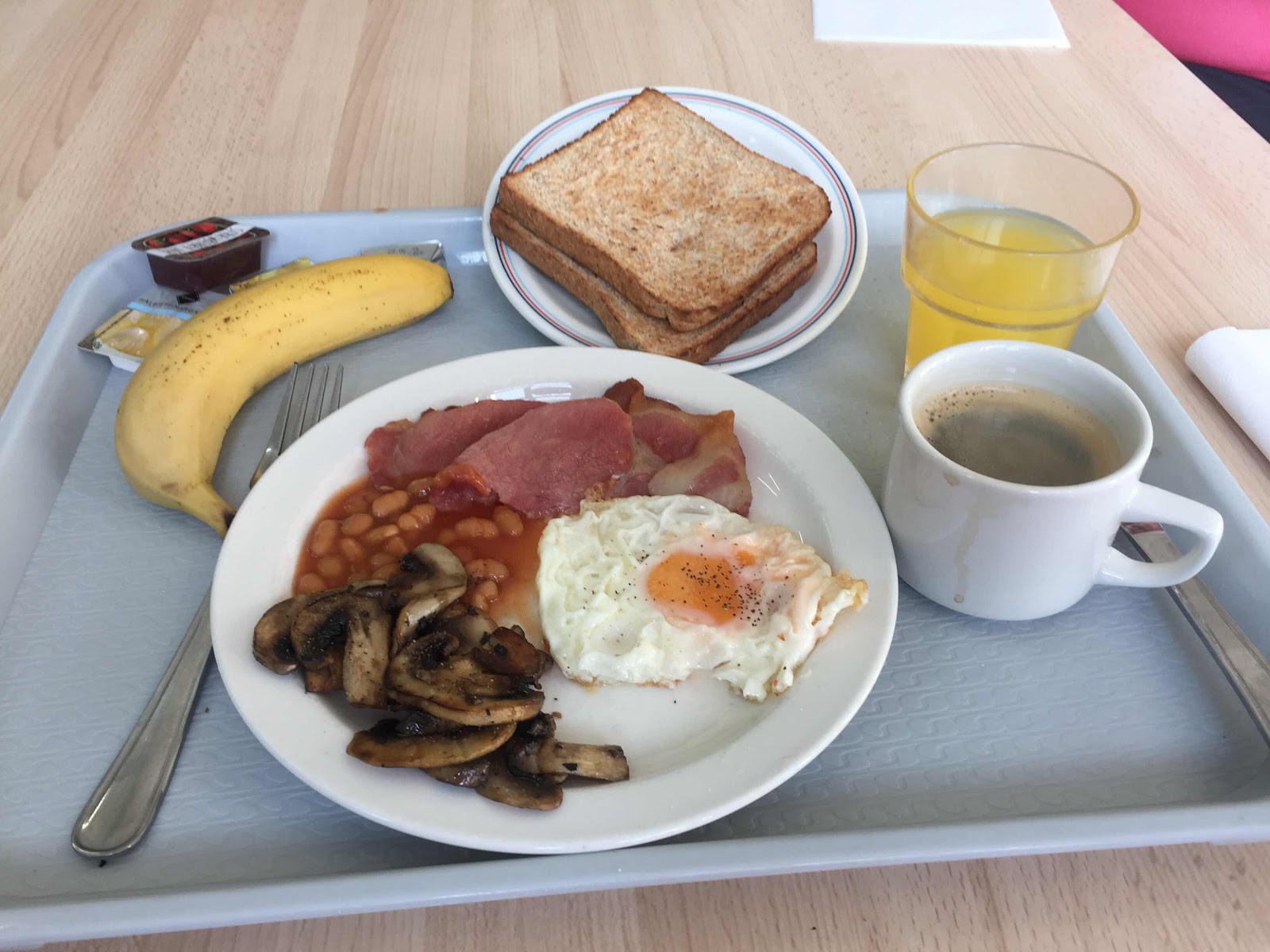 A full English breakfast with baked beans which our BBF loves was offered and eaten by the humans! 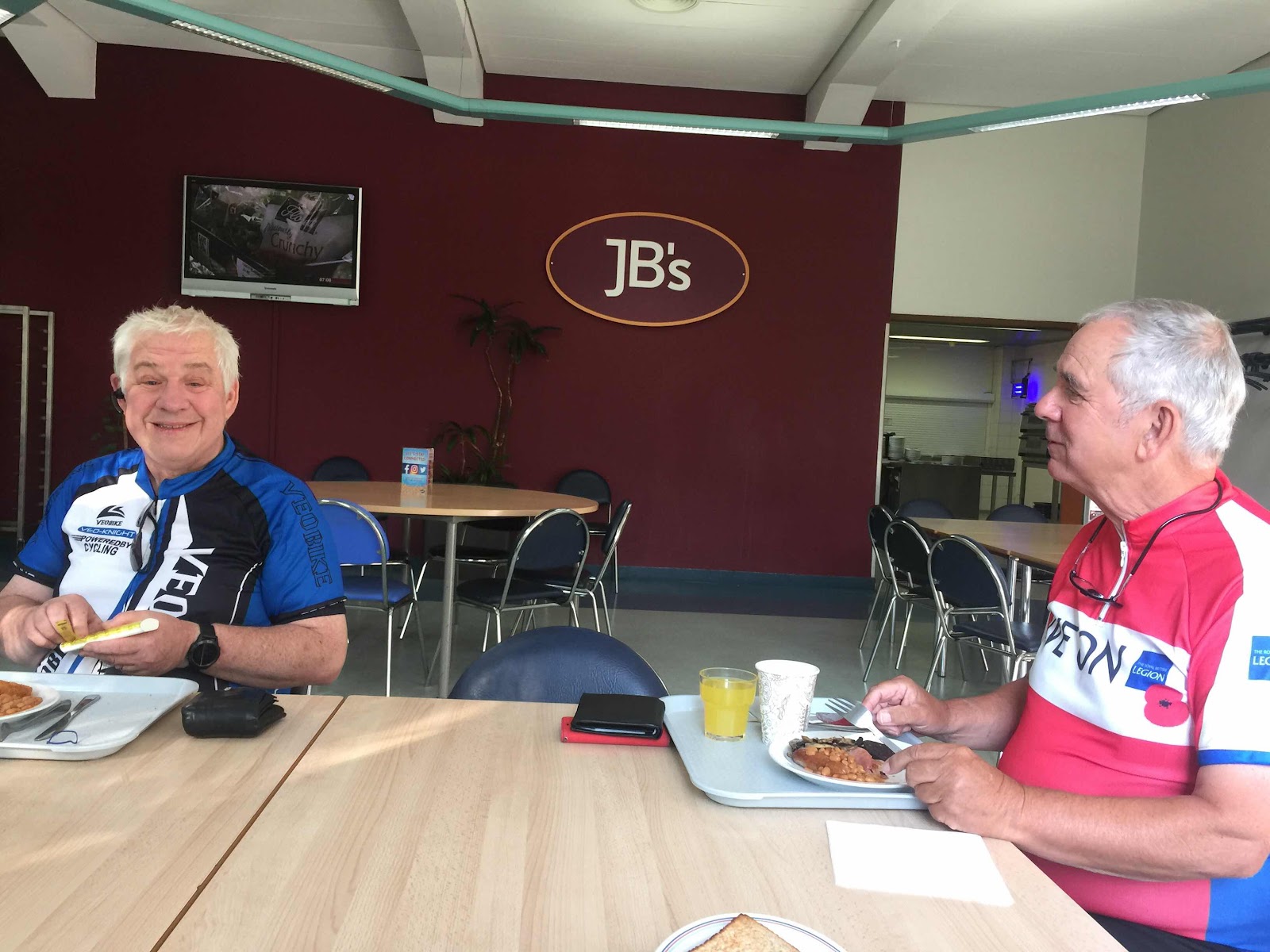 Then we cycled to the guardroom where our two humans had to hand in their barrack passes and get their Passport, or in Alan’s case German ID Card returned. 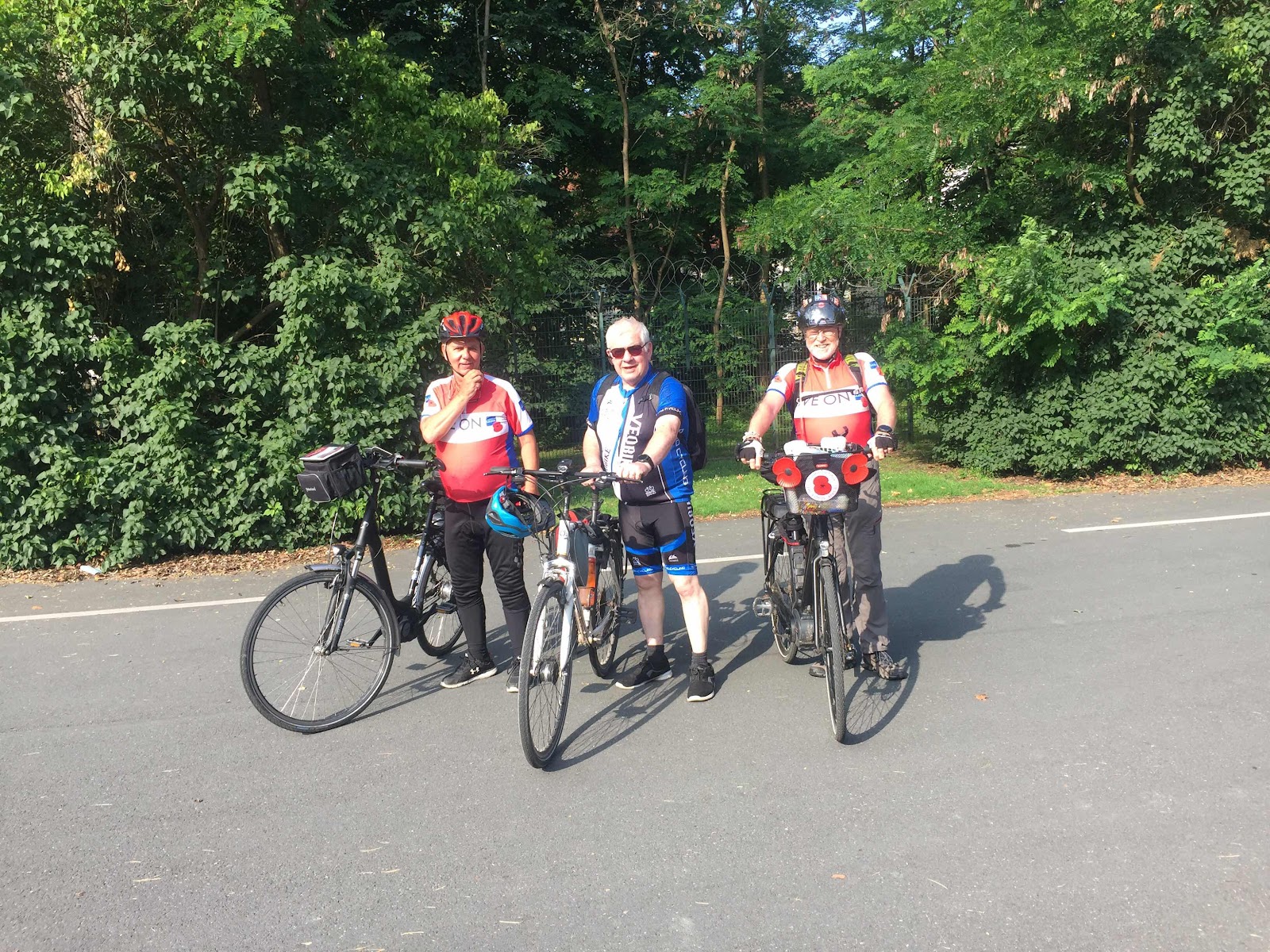 A final photo and then the three intrepid cyclists set off. The day was another lovely sunny and not too hot day. Dusty cycled with us as far as Hövelhof and all in all will have cycled a total of 30 kilometres before he got home again! 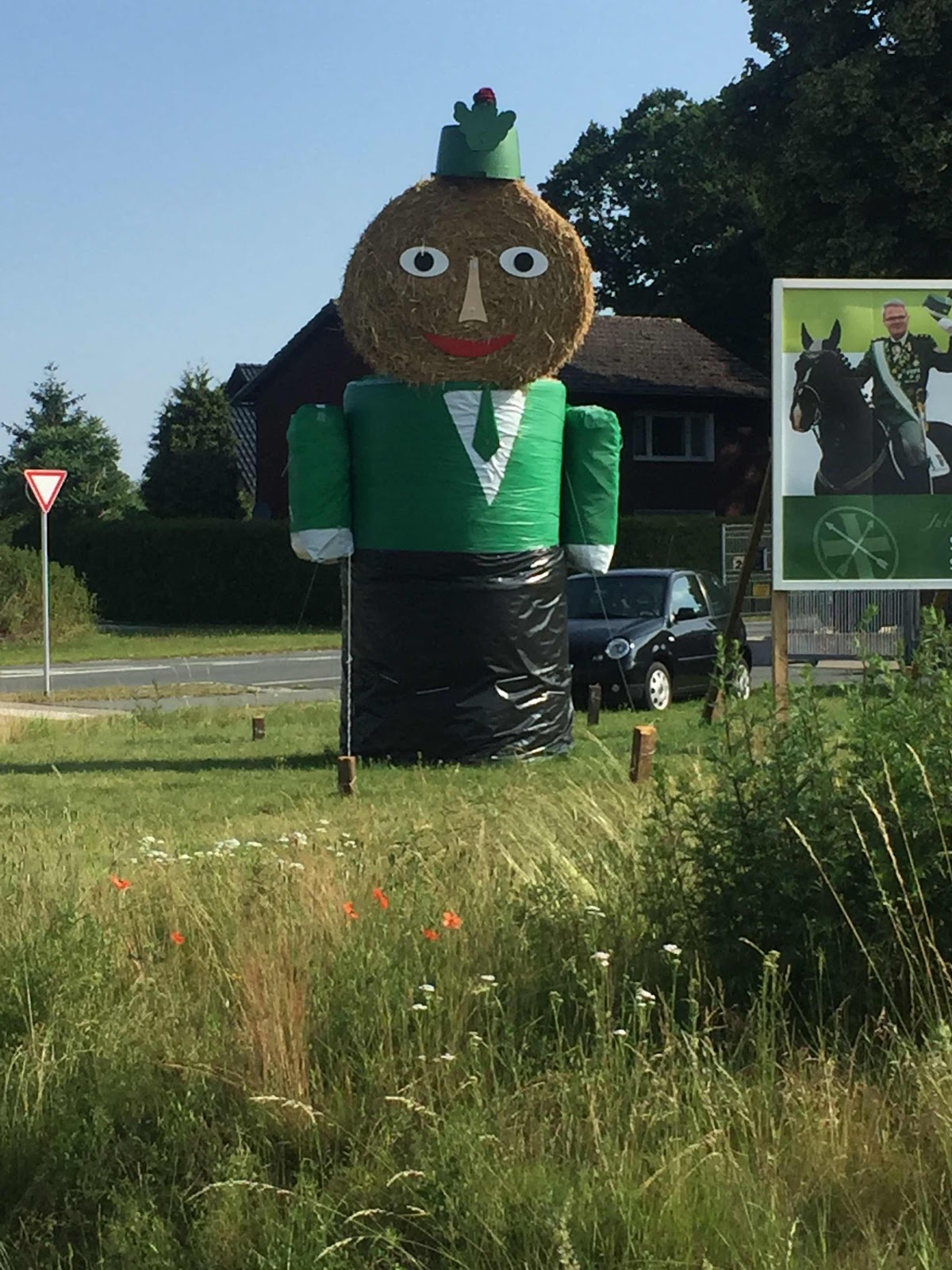 The route was along a long distance cycle path so the going was easy and there were interesting things to see along the way. 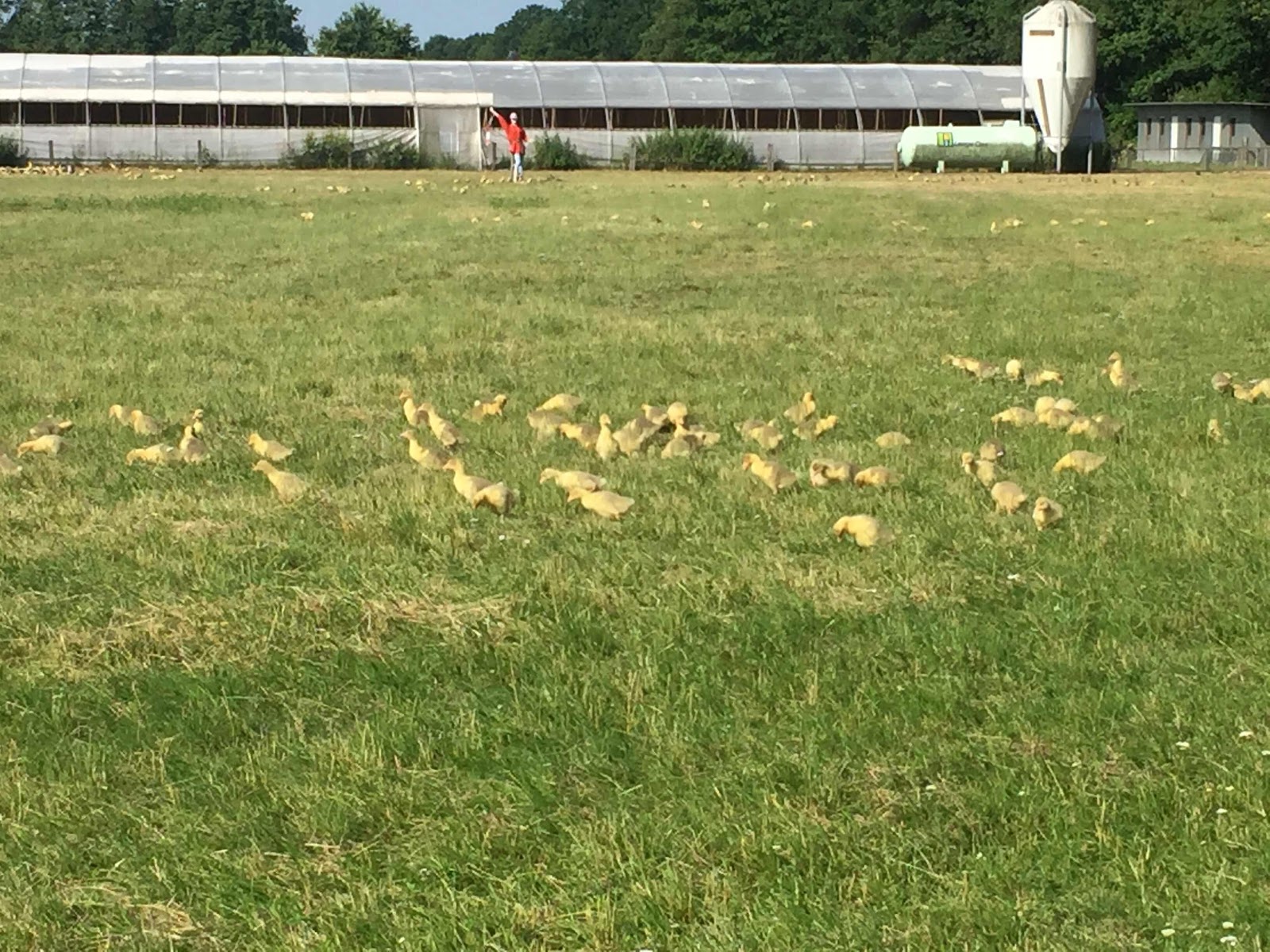 Here we passed a field full of next Christmas’s goose! 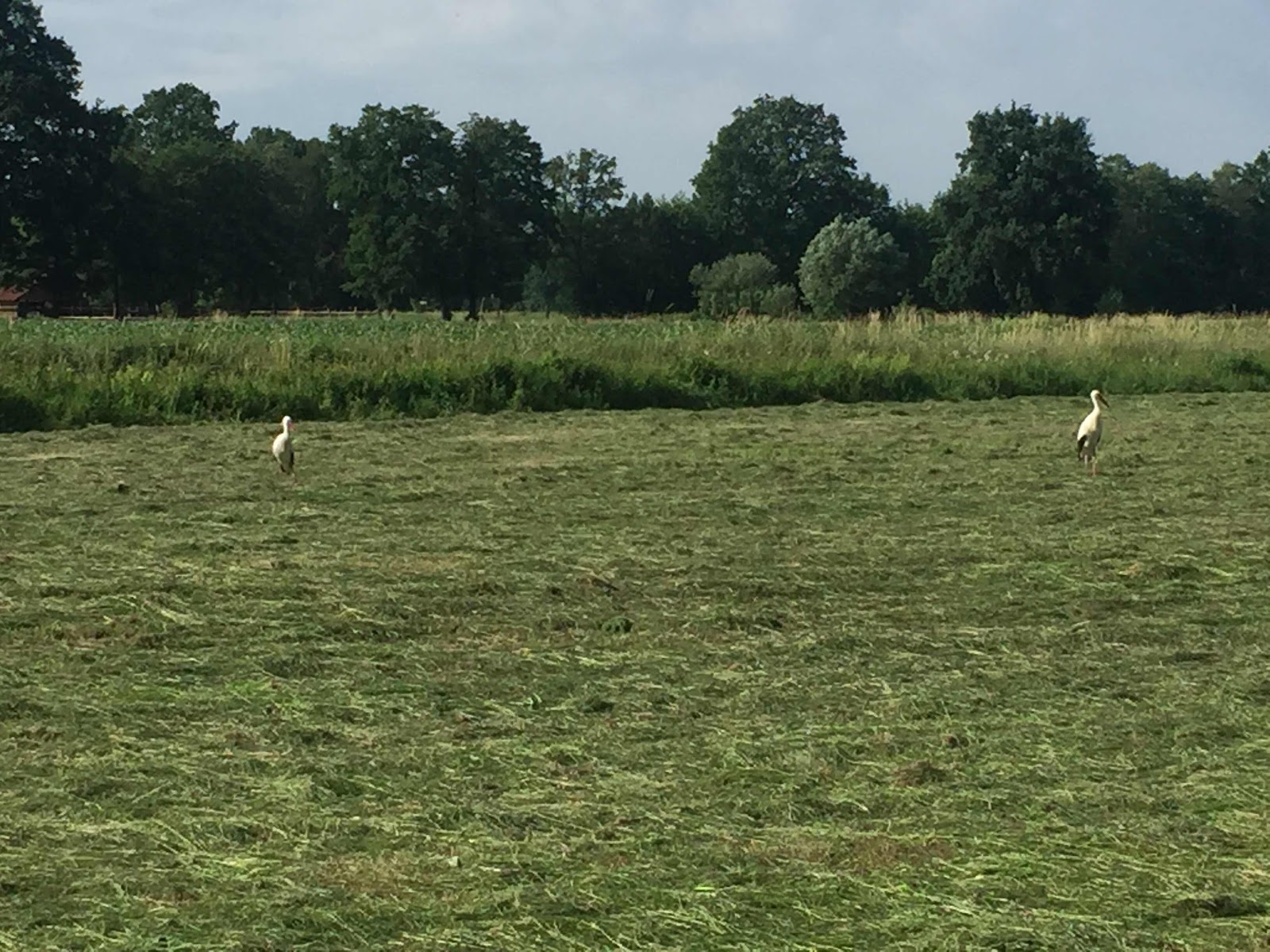 We wondered if these storks had already delivered their babies!
Alan’s Navi which our two had been following now tried to lead them through a locked side gate to Mansergh Barracks, so a bit of casting about was called for before they found the main gate where the local RBL Branch welcome party were waiting!
Introductions were made then we had to hand in our passport and ID card and they were led to the Branch’s office and clubhouse! 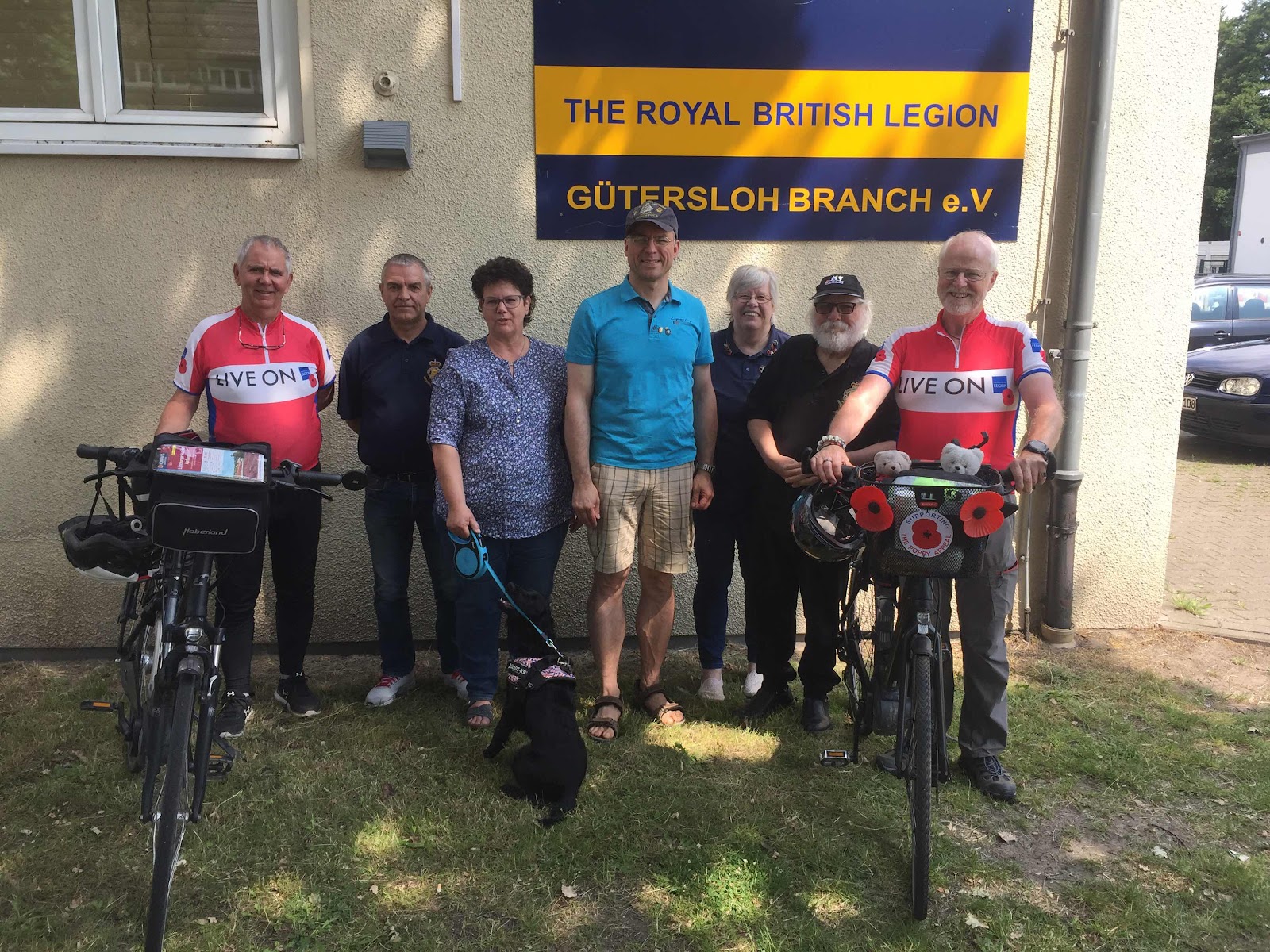 The welcome party consisted of:
Robert Neale the Membership Secretary
Kirstin Neale the Treasurer
Brigitte Doswell the Poppy Appeals Officer
John Doswell the Secretary
Volker Lehmann the Vice Chairman
Mathew Smith the Chairman was the Head Chef at Kings School which as it happened was having a grand reunion and closure celebration, so was working. Our two went over to meet him in his kitchen and he kindly offered to store the bikes in his building for the night!
It had been arranged that Dusty would collect our cyclists take them back to Paderborn for the night and return them to to their bikes after breakfast on Sunday! 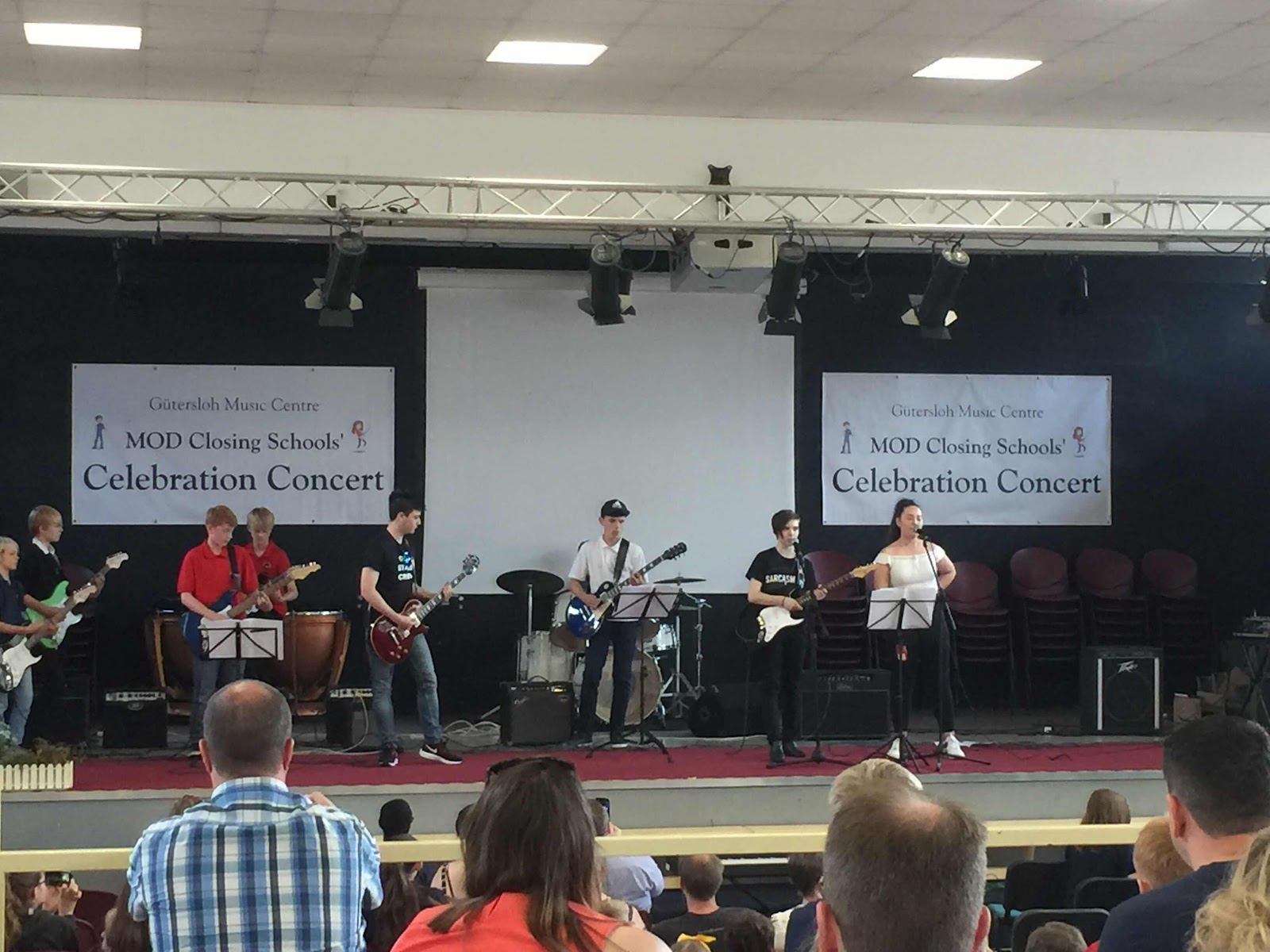 Kings School were clearly having a good day and the children were showing off their musical and singing skills in a big concert!
Our two cyclists then with the help of Volker Lehmann and an RBL Poppy Appeal Collection Box talked to people outside the RBL clubhouse about their 1000 kilometres cycle ride. Those they talked to kindly made donations and by the end of the day they had collected €80,51!
Once the bikes were secured we returned to the guardroom to collect our passes! Our BBF now discovered that he had lost the temporary pass they had given him! The nice Gunner at the gate returned his ID Card anyway! 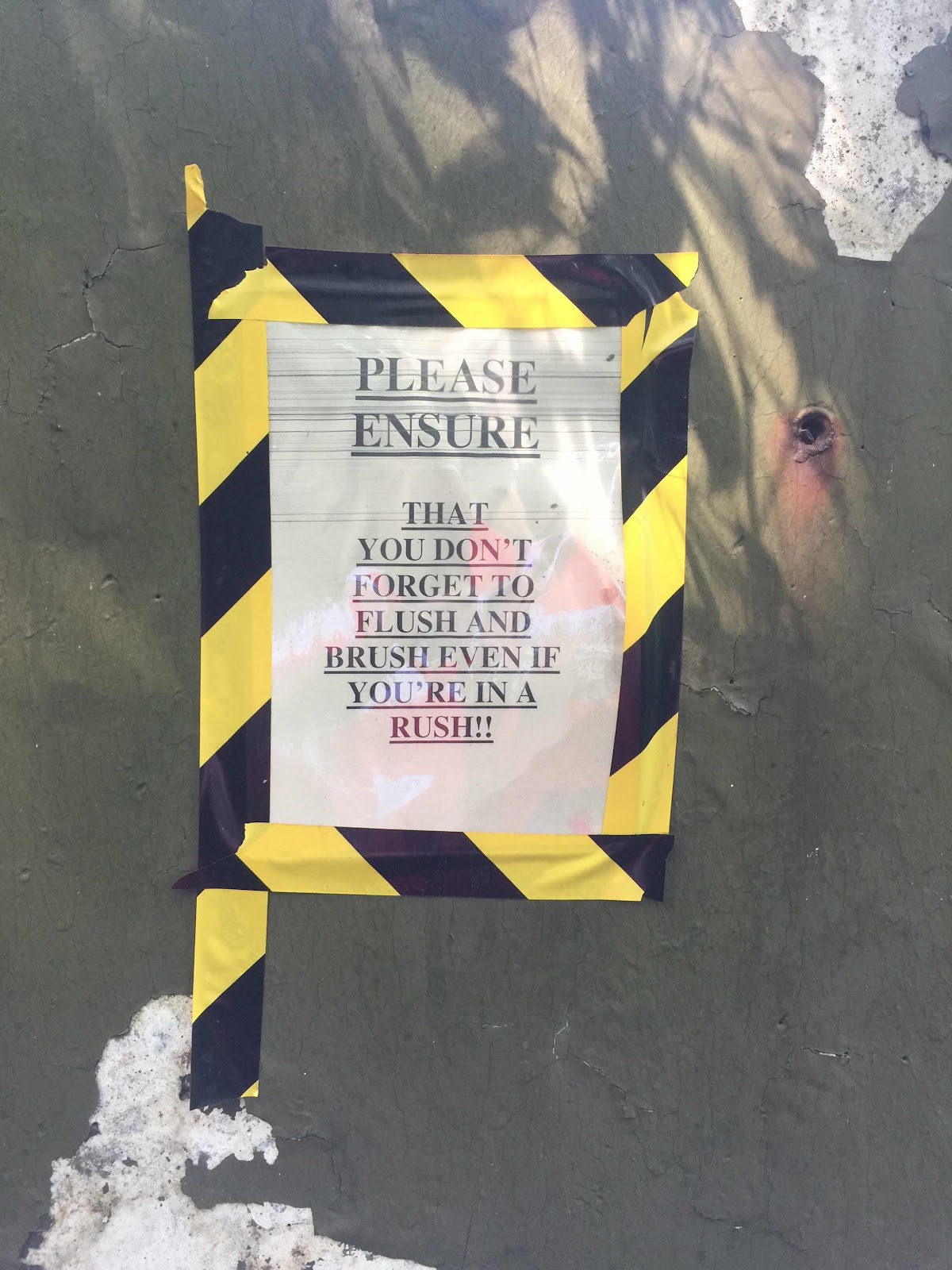 While waiting for Dusty to come and get us, our BBF was now embarrassed by needing to wee! He snuck round the back of the big concrete bomb proof blocks to attend to this call of nature only to find this notice on the back! Clearly the Army still has a good sense of humour.
Back in Normandy Barracks showers were had. Dusty waited in the NAAFI to take us out to a restaurant for our evening meal. He will return in the morning to join us for breakfast and then take us back to Gütersloh where we will cycle on to Osnabrück!
Posted by Alan Tyson-Carter at 18:18