It’s why we came!

This morning our BBF made us get up early! The Cathedral opens at 07:00 hrs and he said if you want to pray in the crypt by the remains of the Saint, this is the time to do it. At other times of the day there are just too many people, mostly tourists, to be able to pray in peace.
So shortly after 07:00 hrs we passed the pilgrims office where the first pilgrims were queuing already. It doesn’t open till 08:00 hrs, so even this way they have to wait an hour! 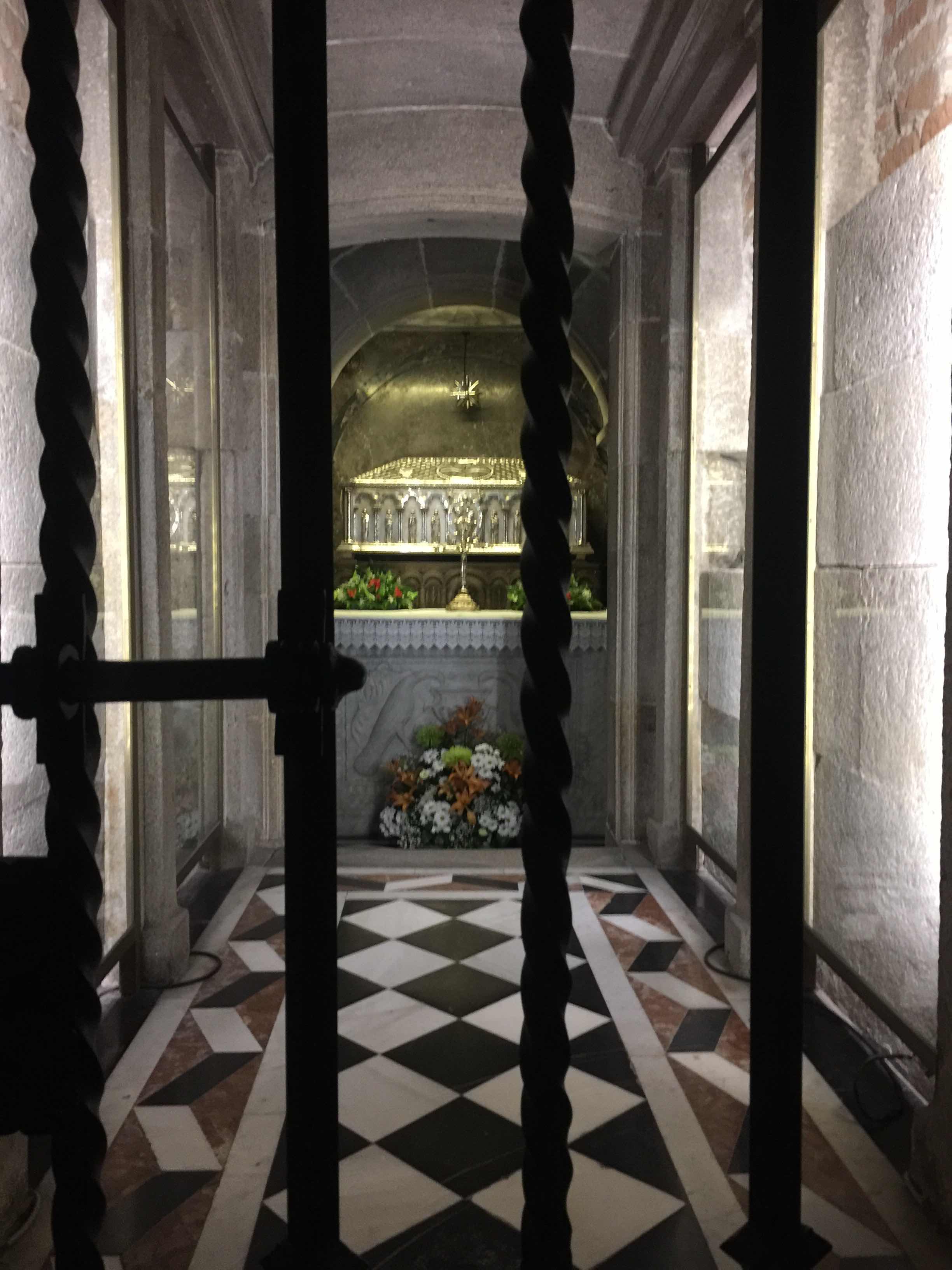 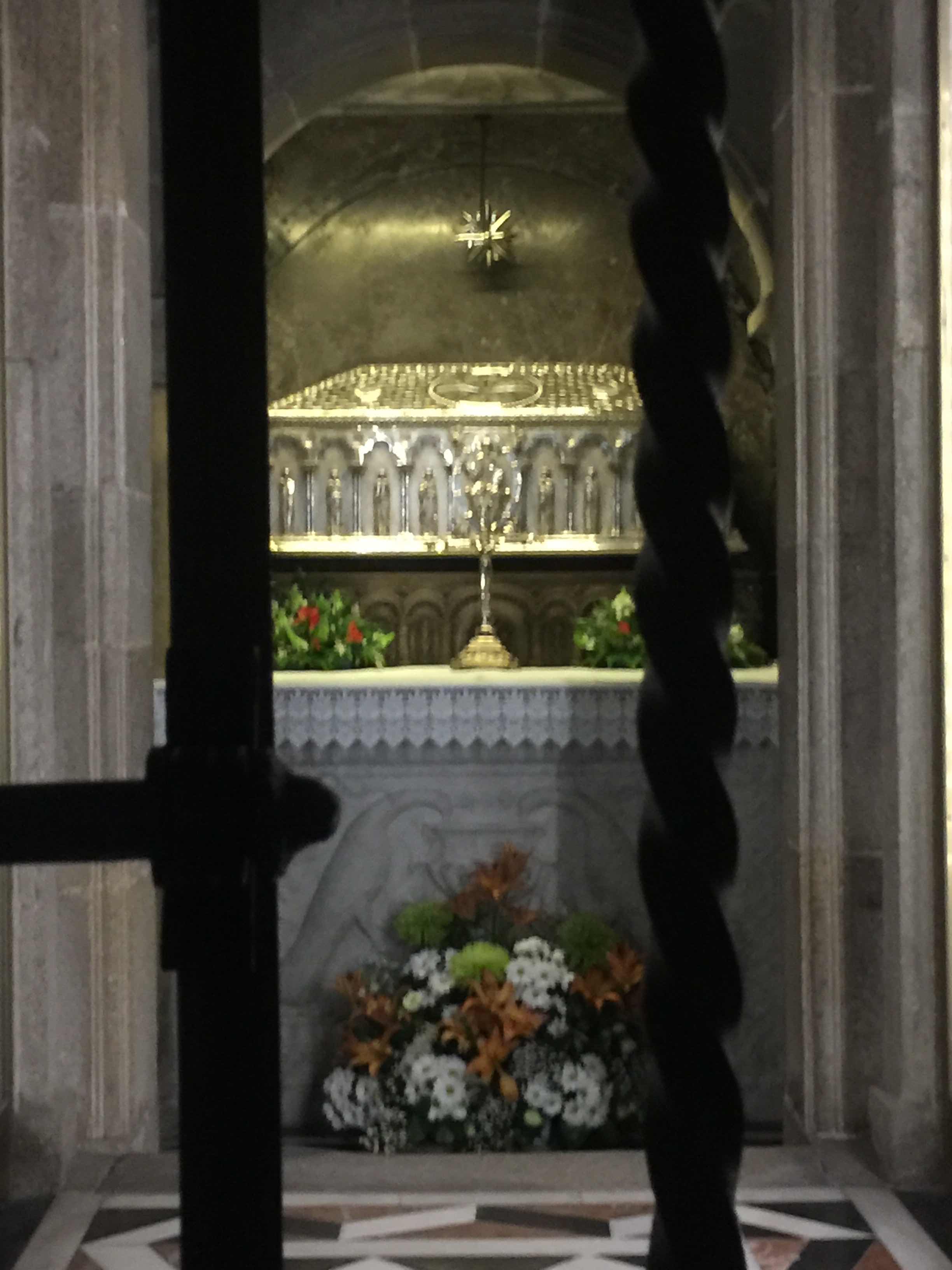 As expected we had it to ourselves, but not for long! Alan knelt and  sang the pilgrims Hymn quietly, but so one standing by him could hear and as he got to the last verse a number of people cane into the crypt and stood quietly behind us. They left we stayed to pray. We had come a long way for this moment and we would use it, for it maybe our last! 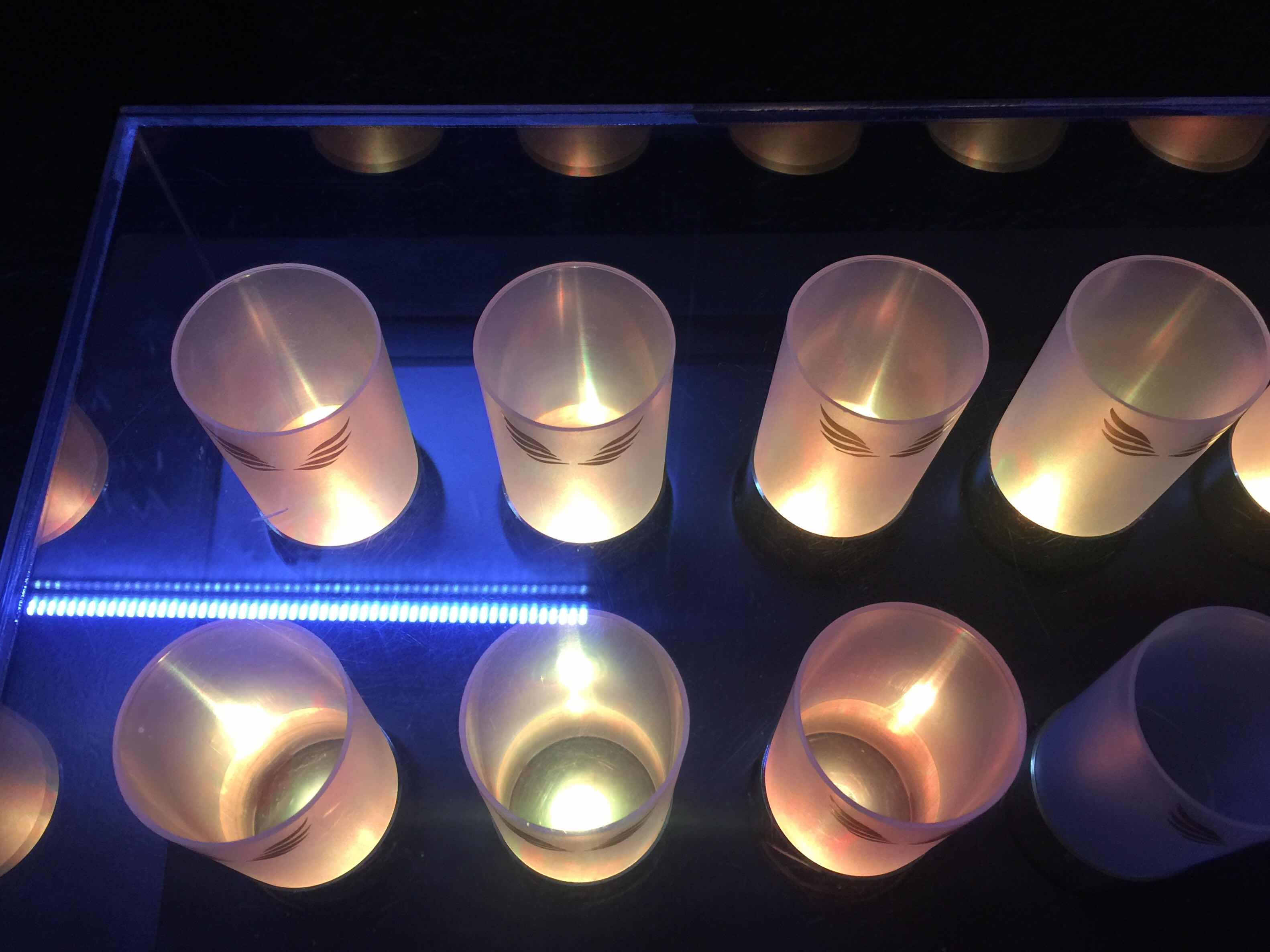 Along the wall in the crypt behind the kneeler are electric candles! We don’t like them, but there was no other option for us than to light up four candles, one each for his poorly friends and one each for his little family’s! 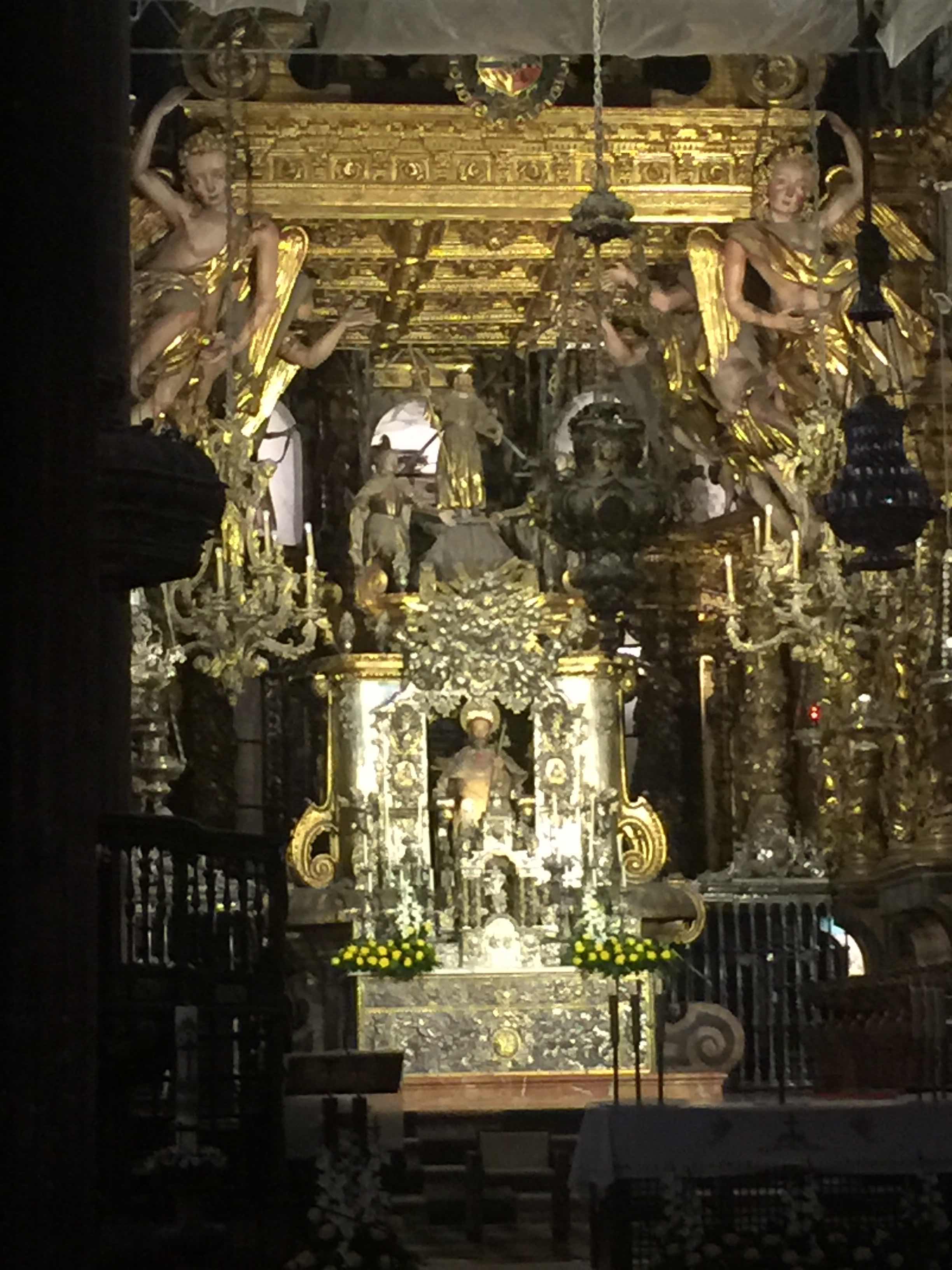 The statue of the Saint behind the Altar and above the crypt was our next stop! 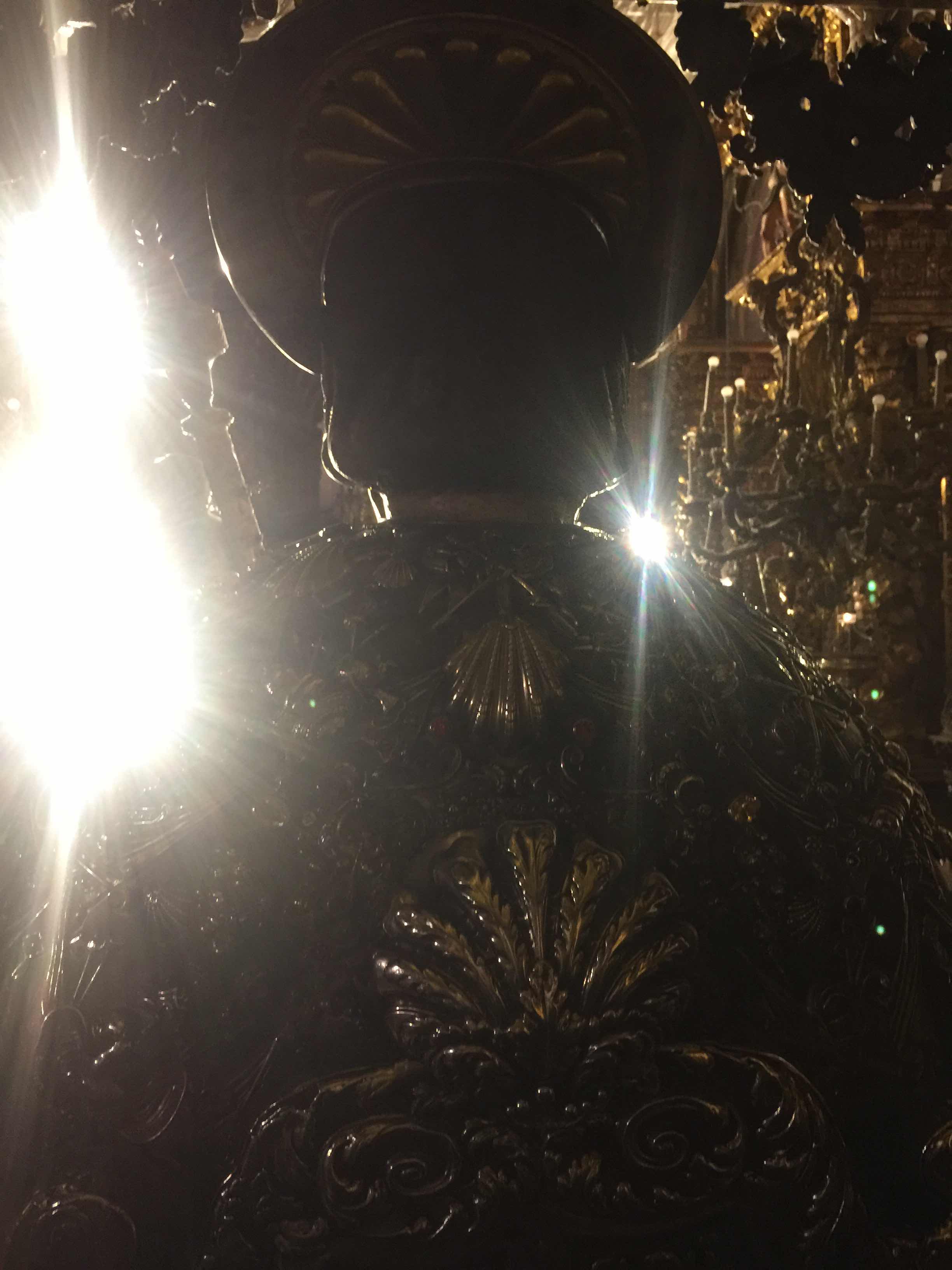 The last thing a pilgrim should do before leaving Santiago is to hug the statue, which is what our BBF did from here, giving thanks for the adventure and privilege of doing the pilgrimage! 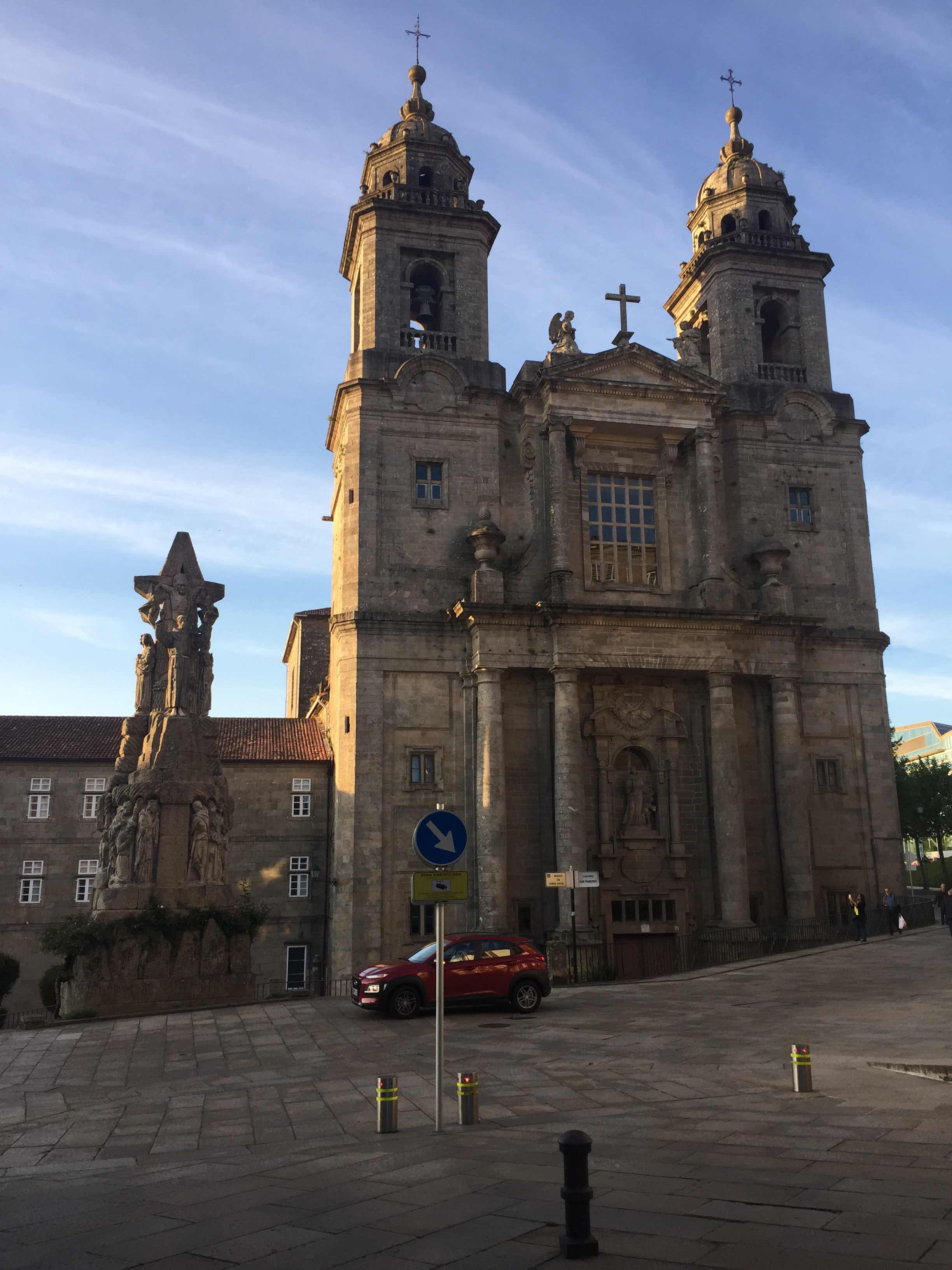 Suitably at one with ourselves we toured the town a little before breakfast! 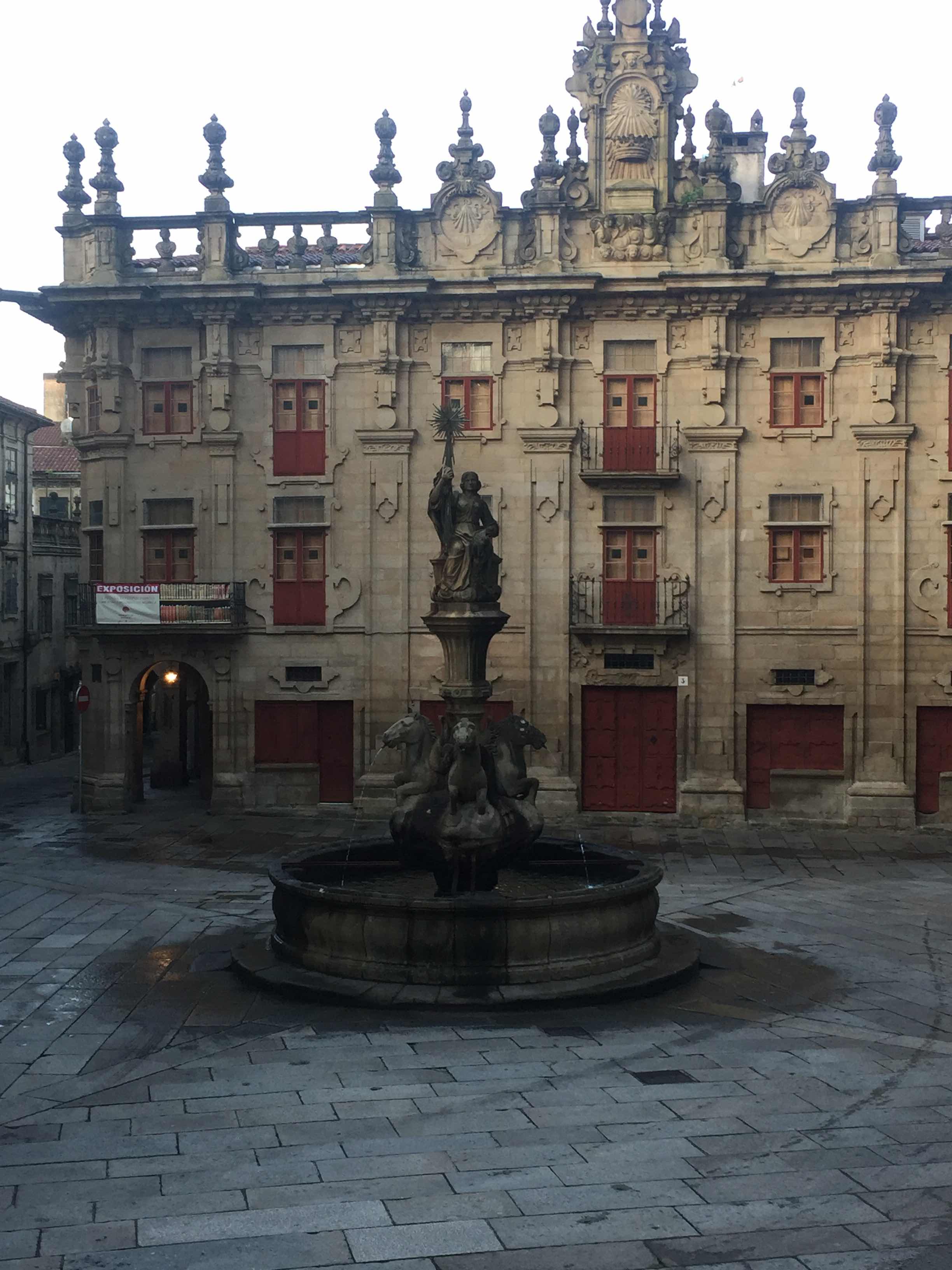 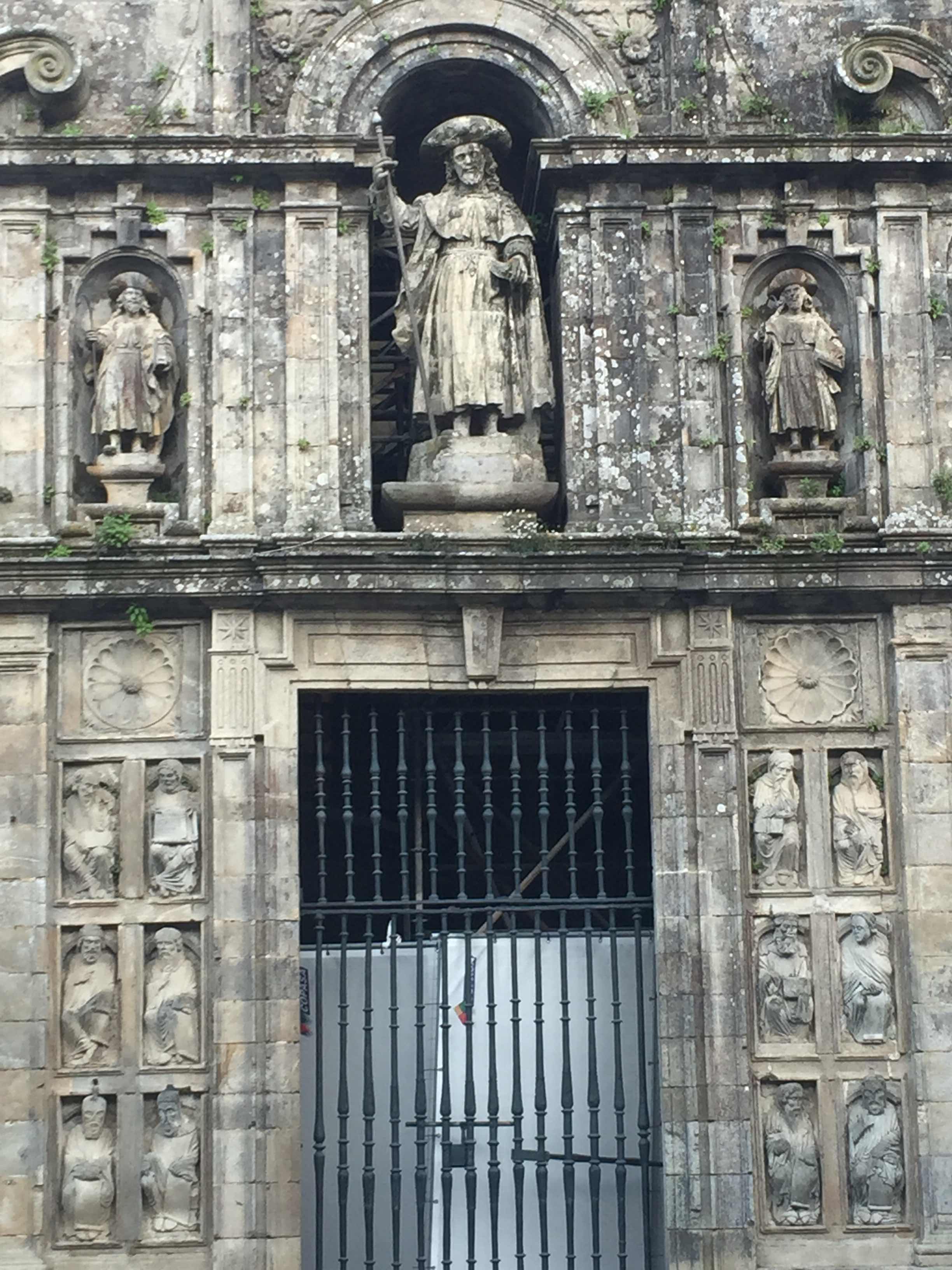 This is the Holy Portal to the Cathedral which in 2016 when we last came was open and by which we always entered it. You may remember that the new Pope had declared it a Holy Year! 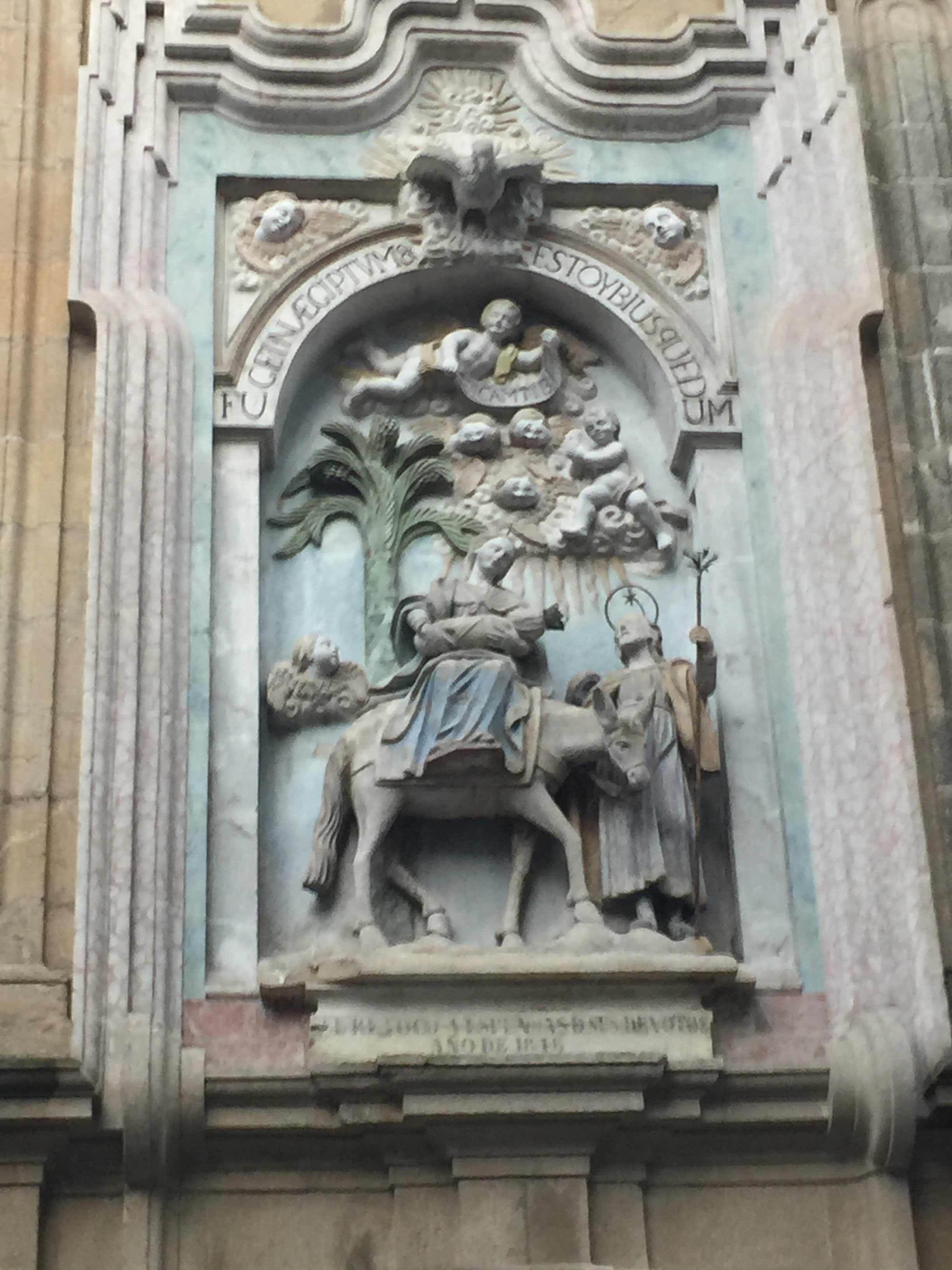 Above the Portal of this church was we presume a depiction of the Holy Family’s flight to Eygpt! We have visited the shrine in Cairo where the Holy Family once took shelter under a fig tree we thought! How we got there and what happened while there is a story for another time, but we were reminded of it as we saw this!
After breakfast we did a little shopping and found a suitable T-Shirt for No 2 grandson! Then we took our seat in the Cathedral to await the Pilgrim‘s Mass. If you want a seat near the front you have to be at least an hour or more early! There were many Japanese tourists already there saving seats for their party! Not much humility exhibited we thought! 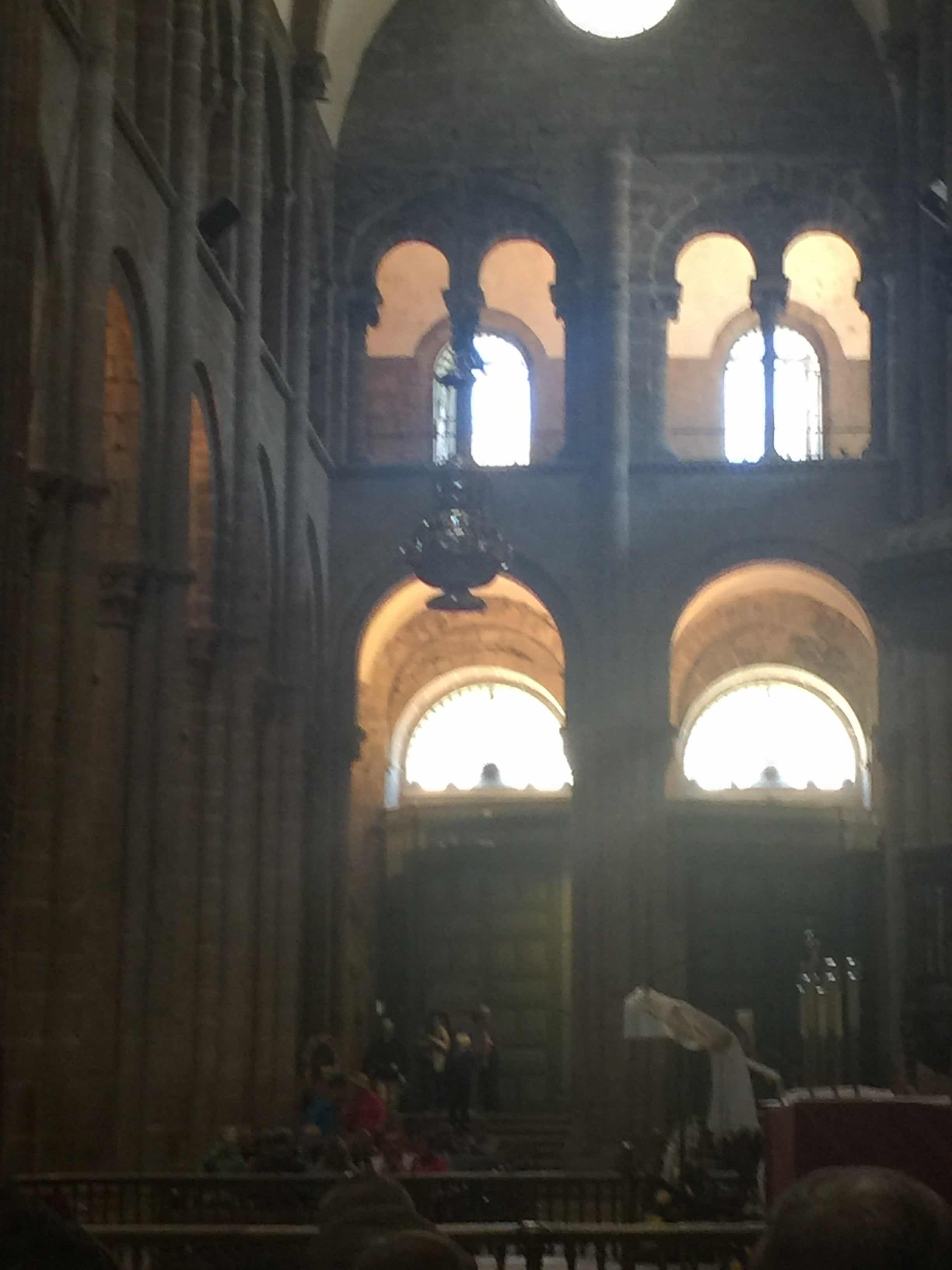 We sat on the south side as we have always done. Our BBF likes it because if they swing the Botafumerio then it swings almost over head. If you sit in the main aisle you only see it swing side to side out of your vision. 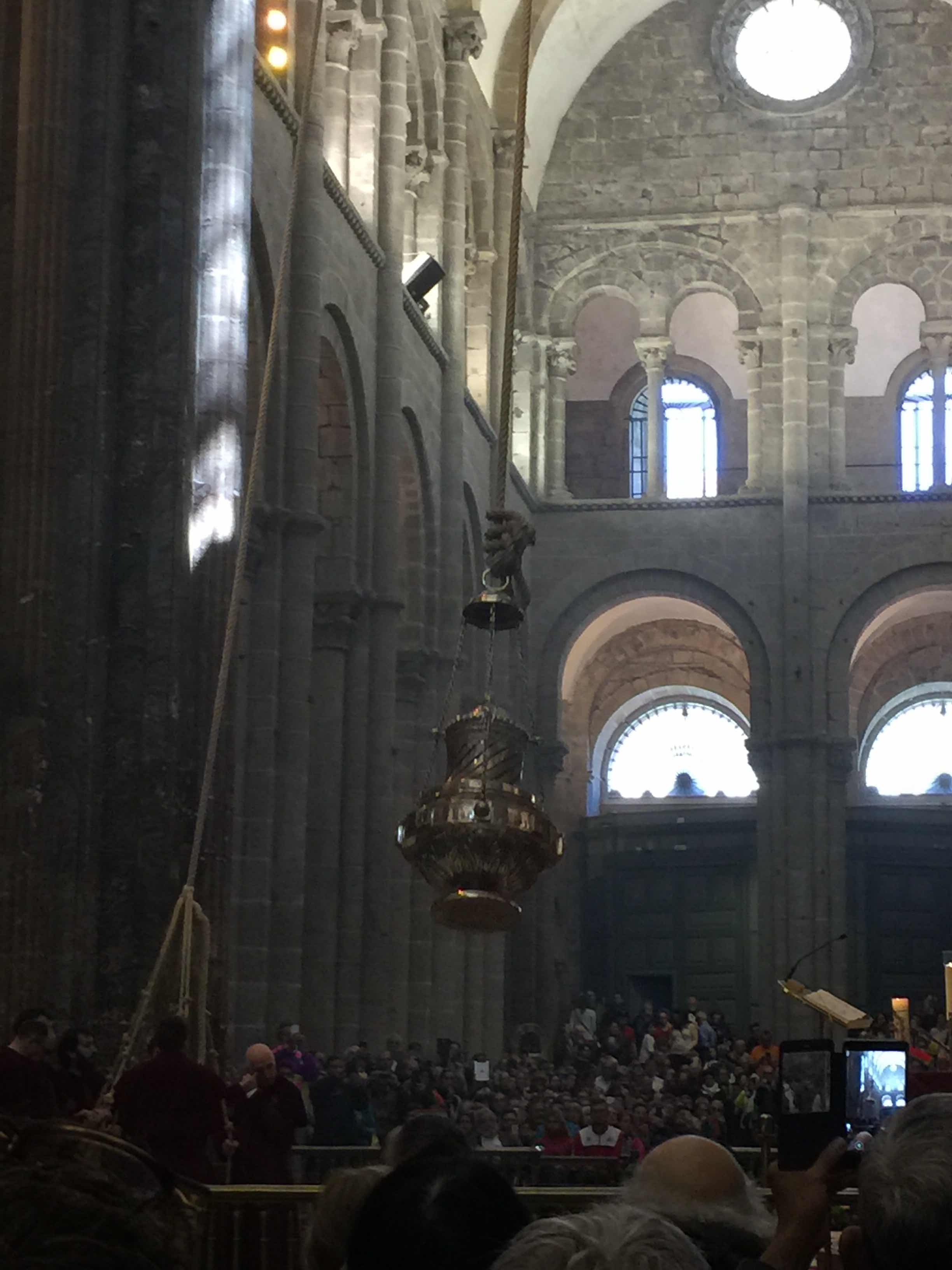 We did video it but have no idea how to get it into the blog. While they swung it the Nun sang and she has the most beautiful voice. 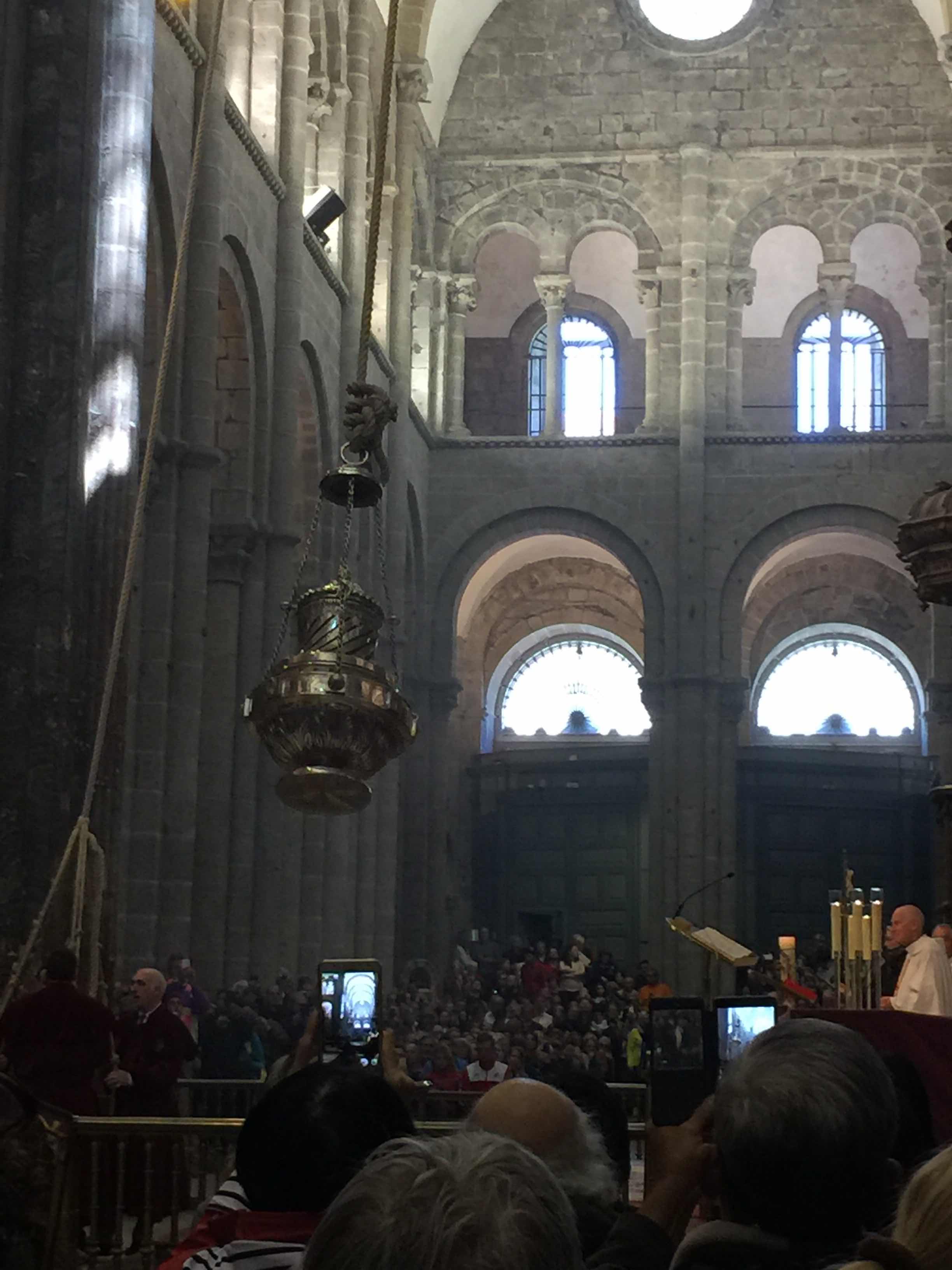 Lunch was in order when we came out. 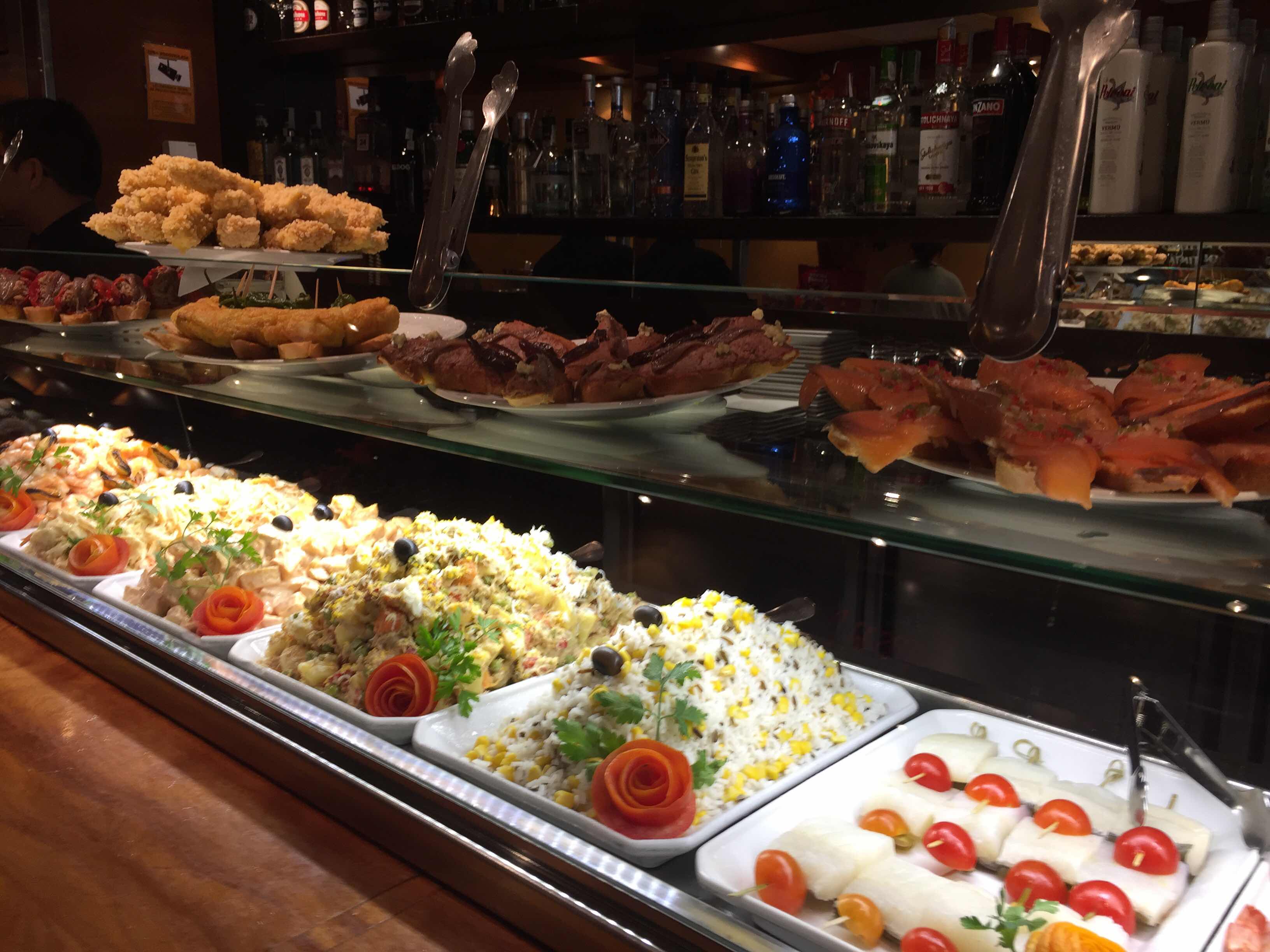 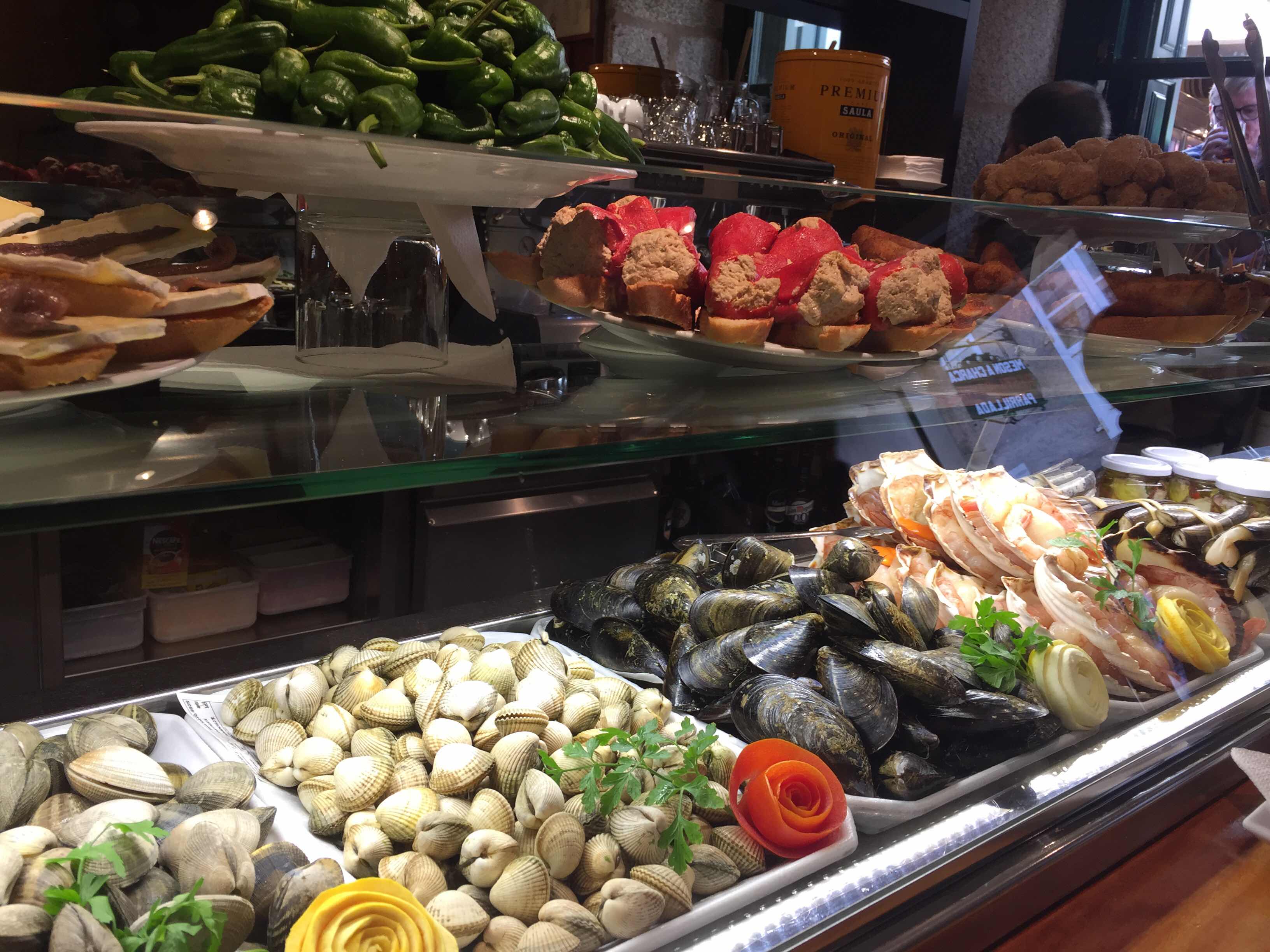 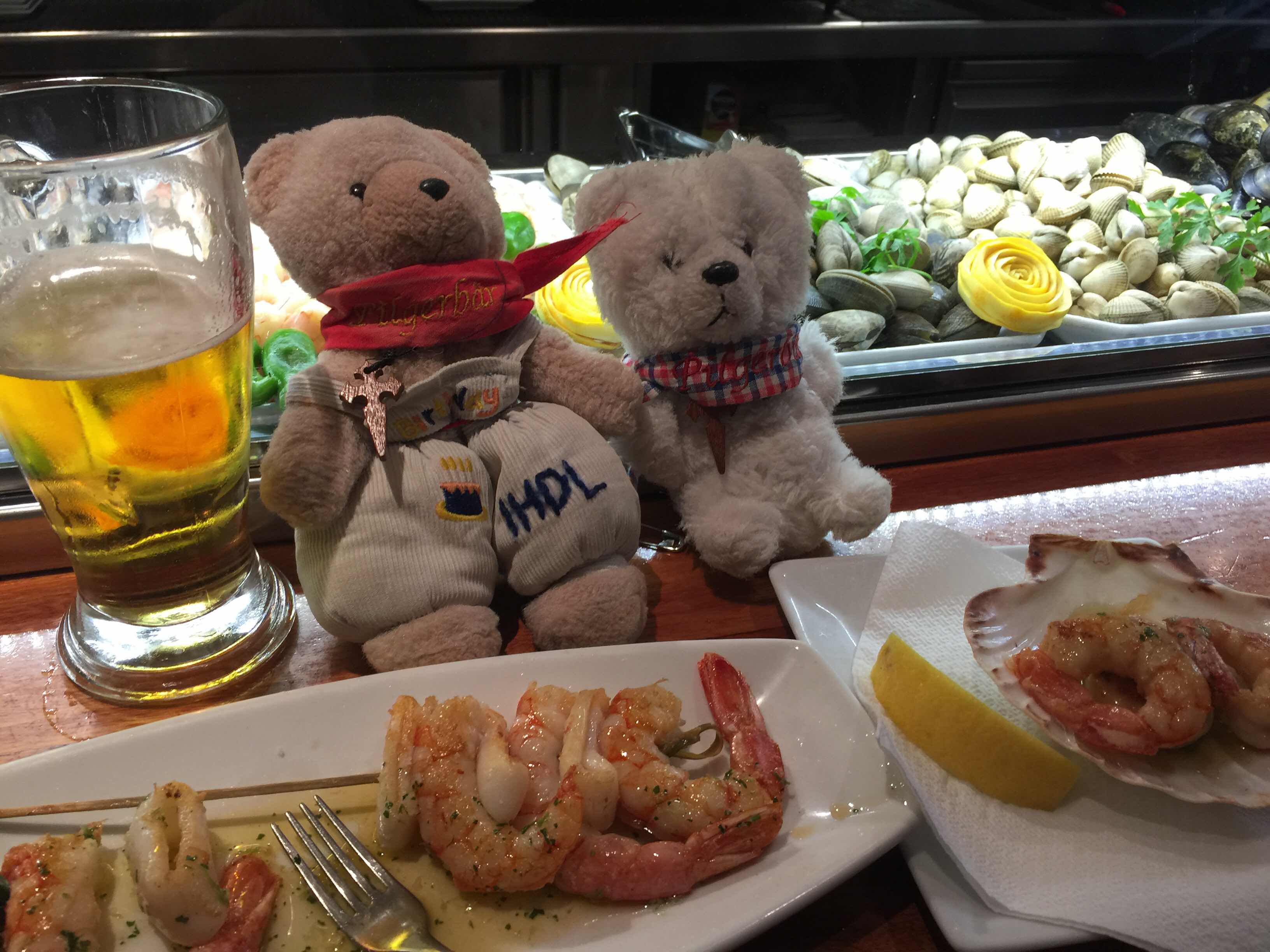 We tried the other Tapas bar today, this has equally good Tapas, but is not so friendly as our favourite one. Alan said Scallops were in order today!
Feeling full and satisfied with ourselves we returned to our hostel for a siesta! When in Spain............
Buen Camino 🐻❤️😇
Posted by Alan Tyson-Carter at 18:03