Are we there yet?

It was very late when we went to bed last night, but we were up early. Vigo was also already up and about as we found the Camino path out the city. In Caminha, Portugal, We heard much talk among the pilgrims at breakfast about how the Way from Baiona to Redondela was all along roads and through built up areas. It was said that most took the bus to avoid it!
Perhaps this was why there were so few other pilgrims on the road. Nor was it true for we were more often than not on woodland tracks and going between small villages as through the city! 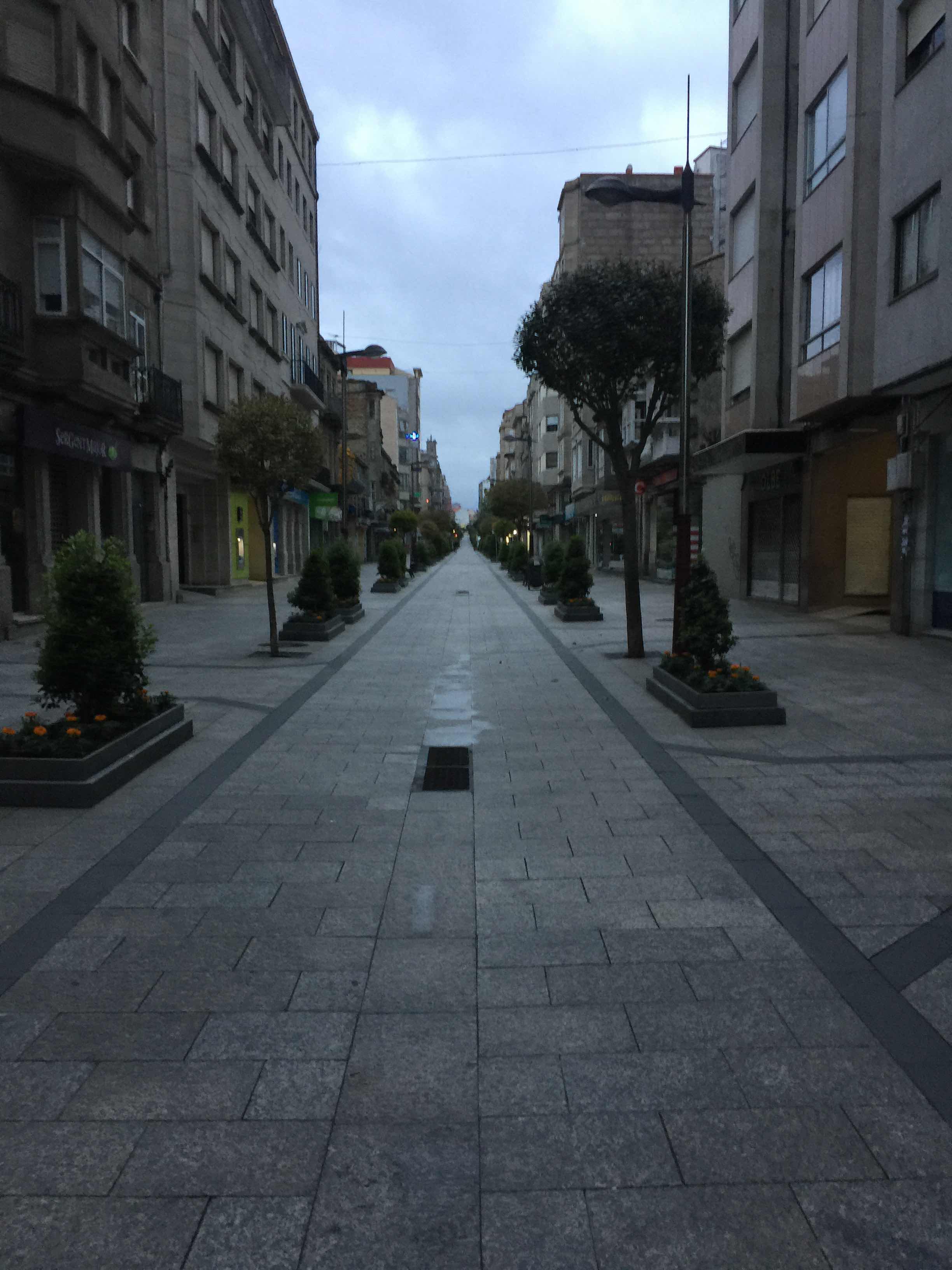 Getting out of town always seems to be up and today was no exception. 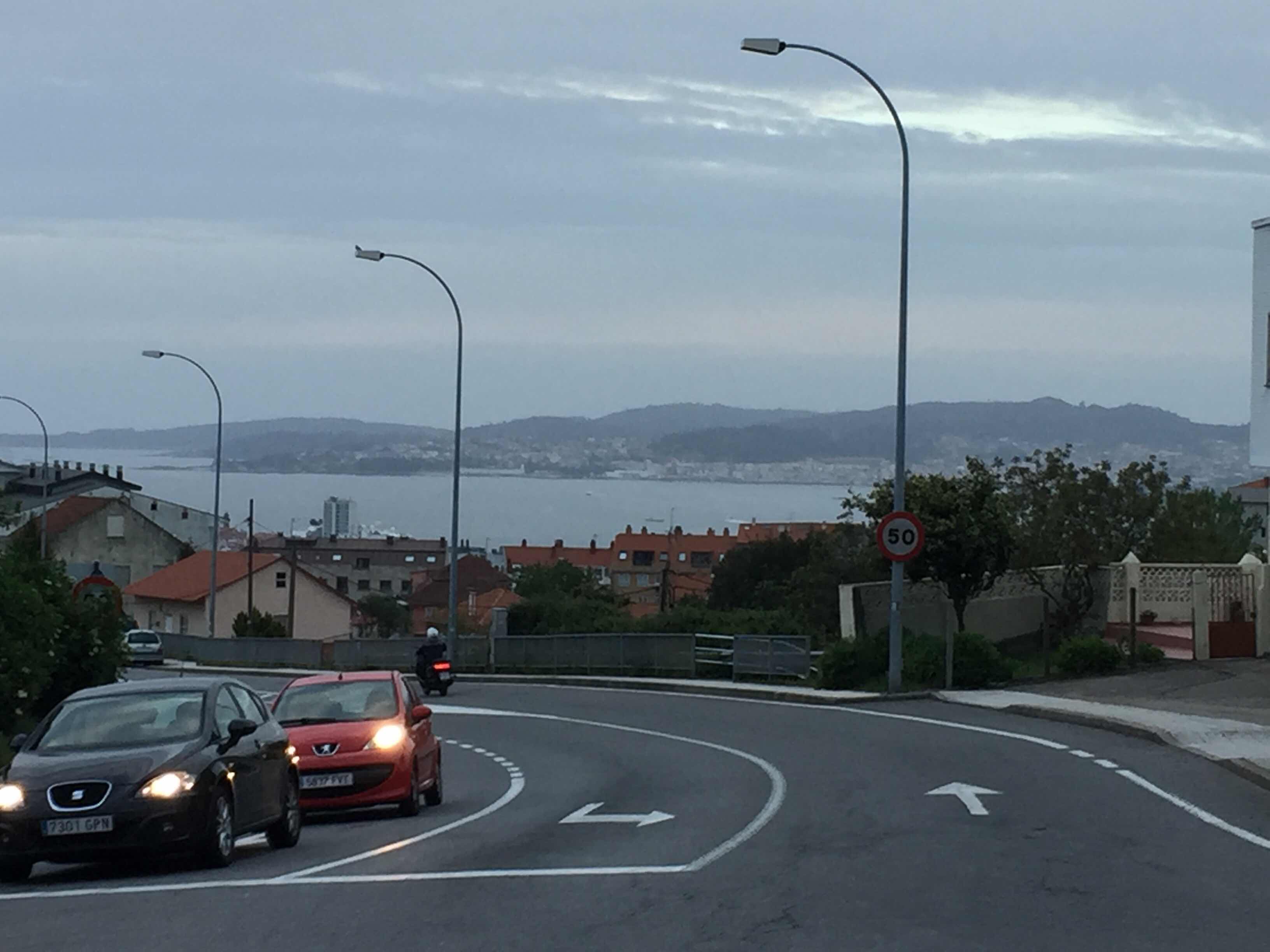 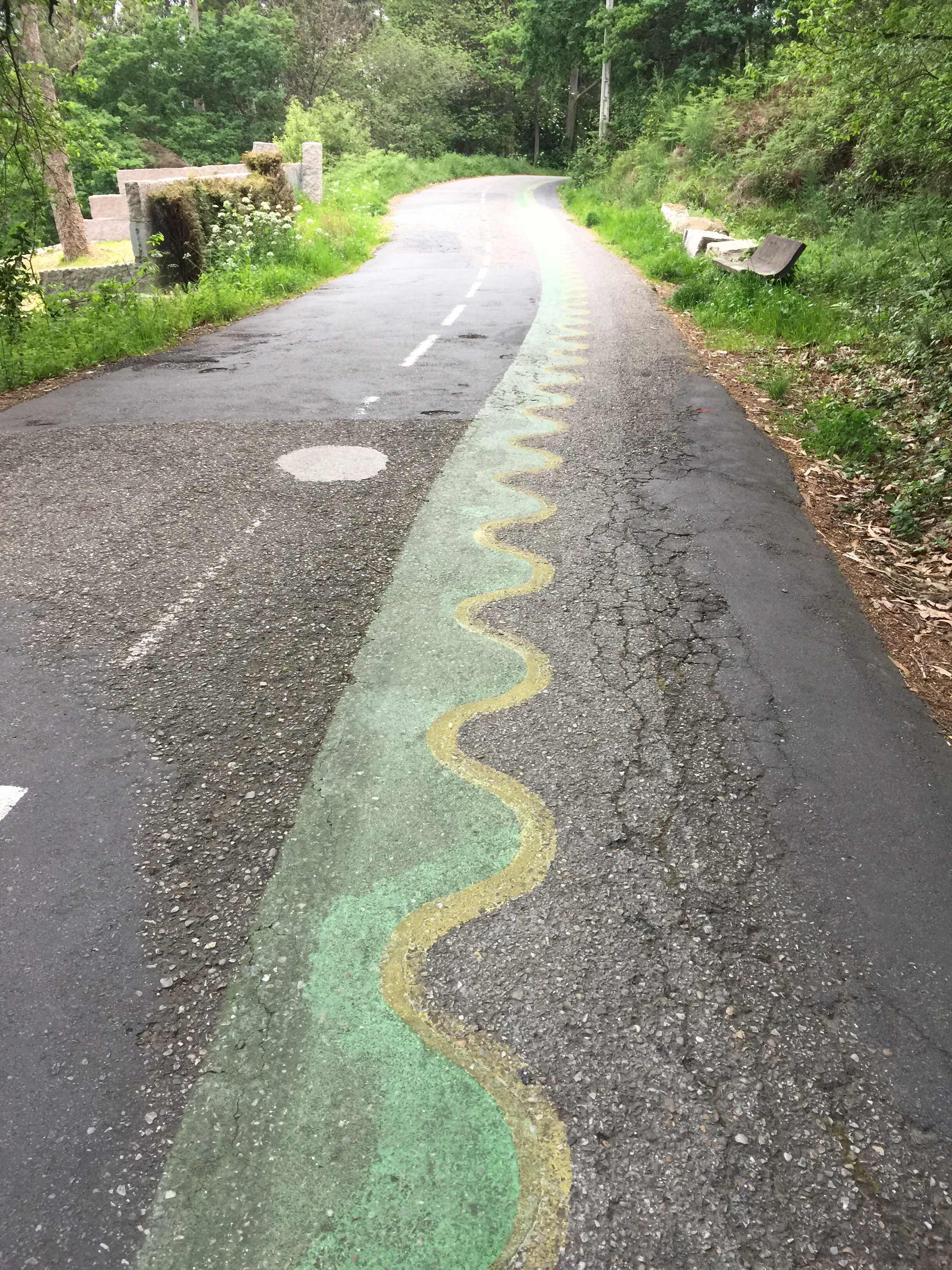 Once out of town and up the hill we followed this wavy line for quite a way! What did it represent? 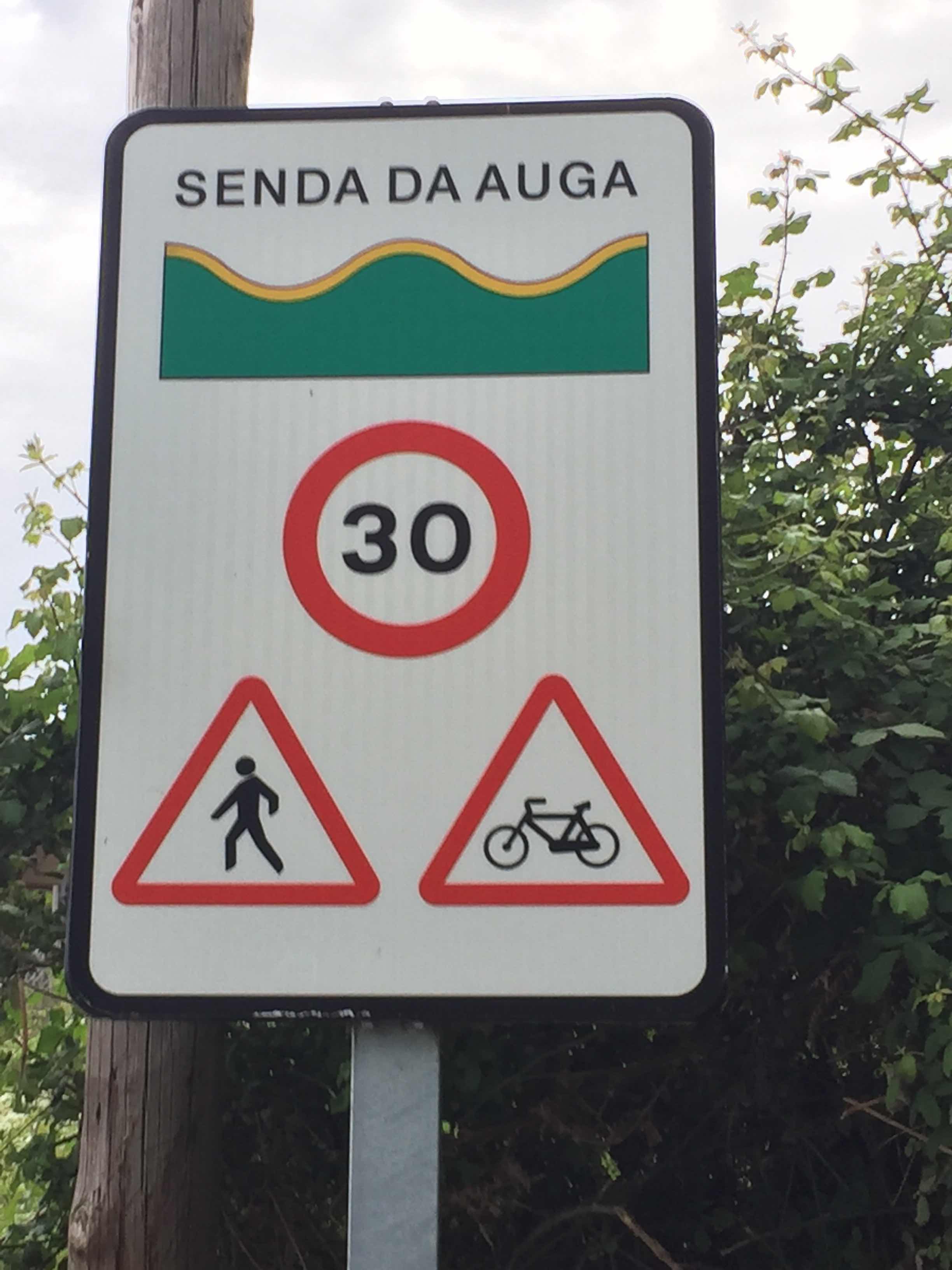 This sign translates as “water path”! Is it the same as the German Wasserschutzgebiet? Or is it literally a water pipeline? 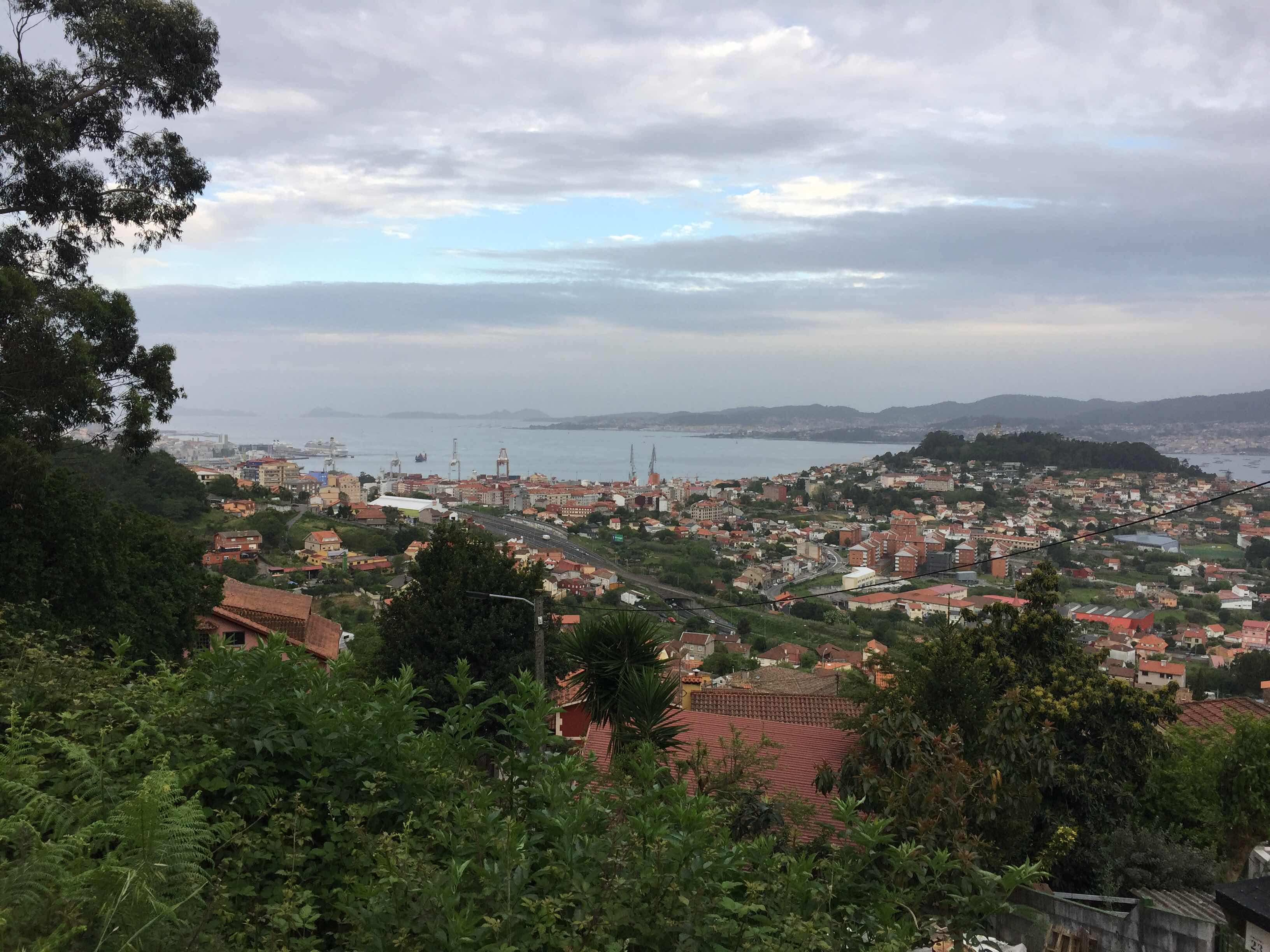 The views always compensate for the effort involved in getting up hill. 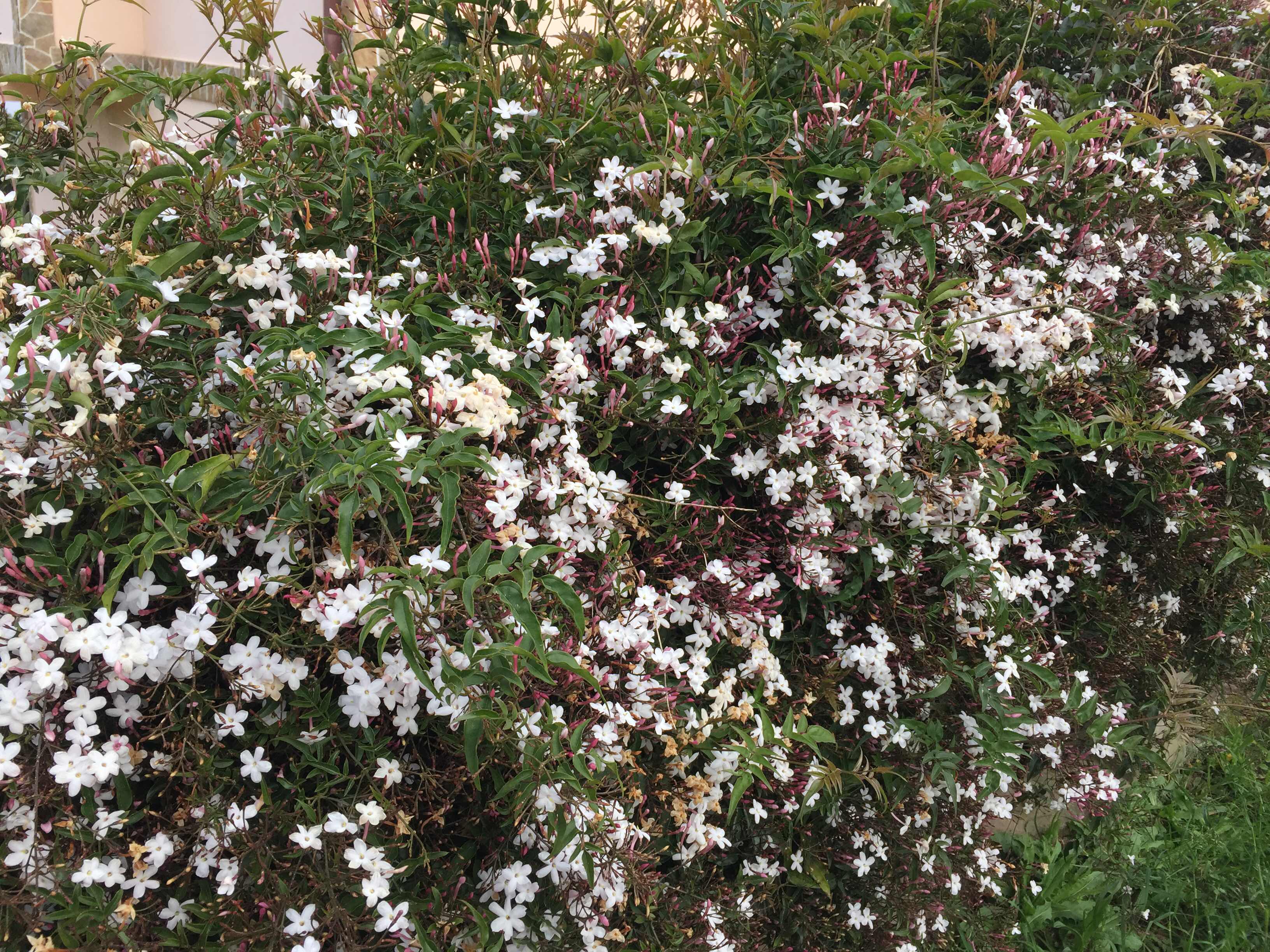 Our BBF always stops to smell the roses or as in this case the other flowers and is pleased when, as here, they give off a wonderful scent. 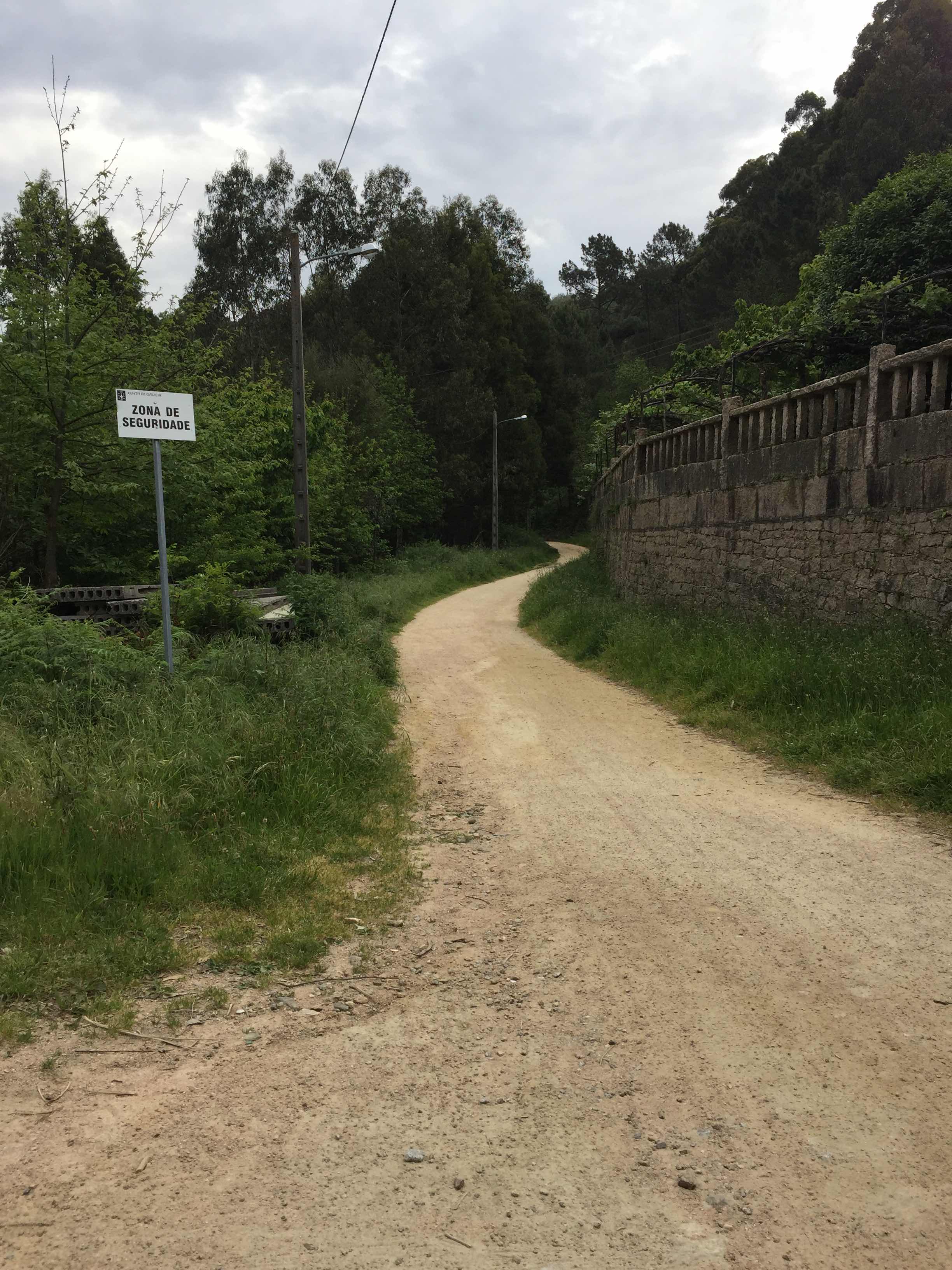 Virtually the whole Way was along paths like this one. 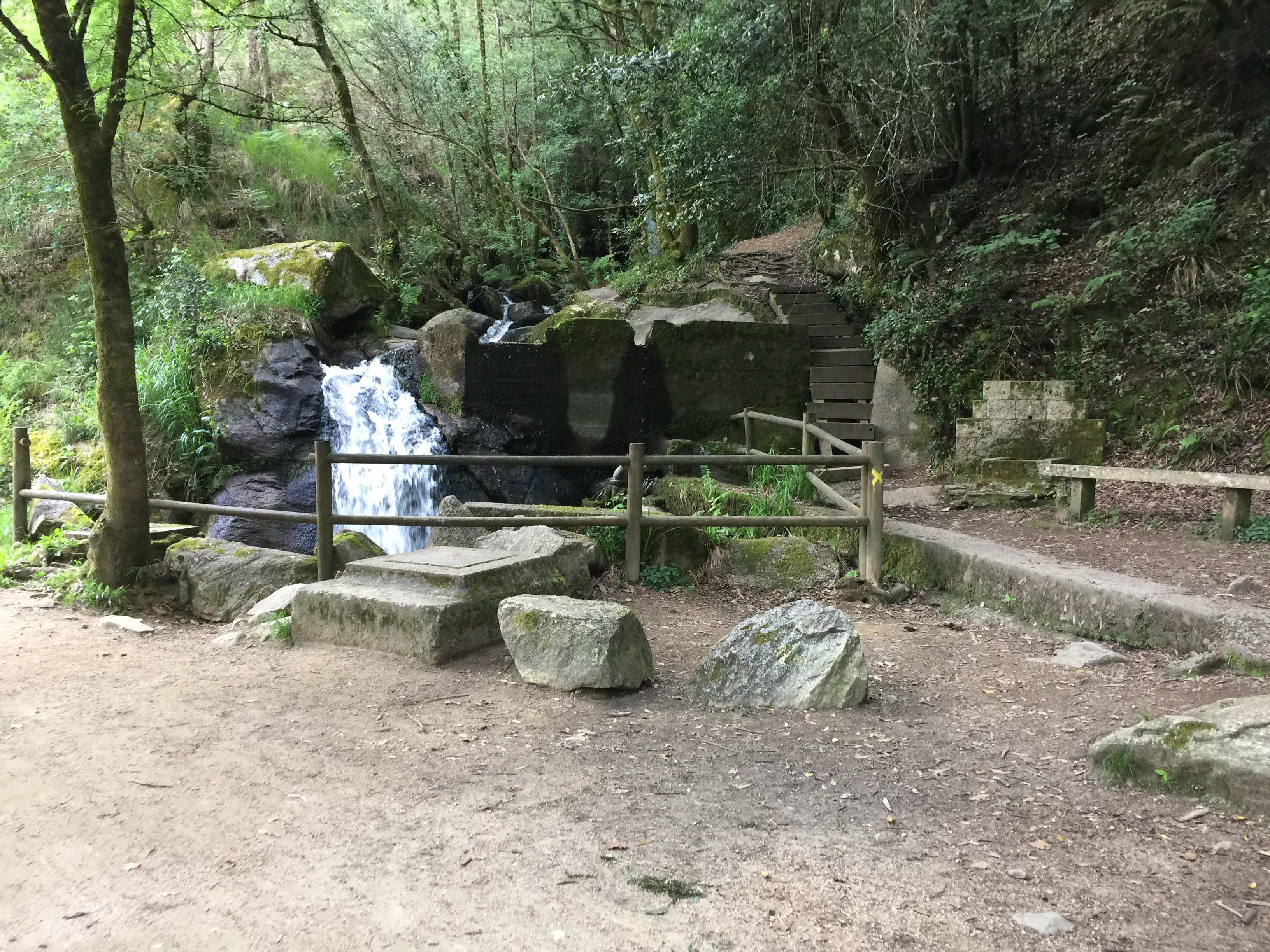 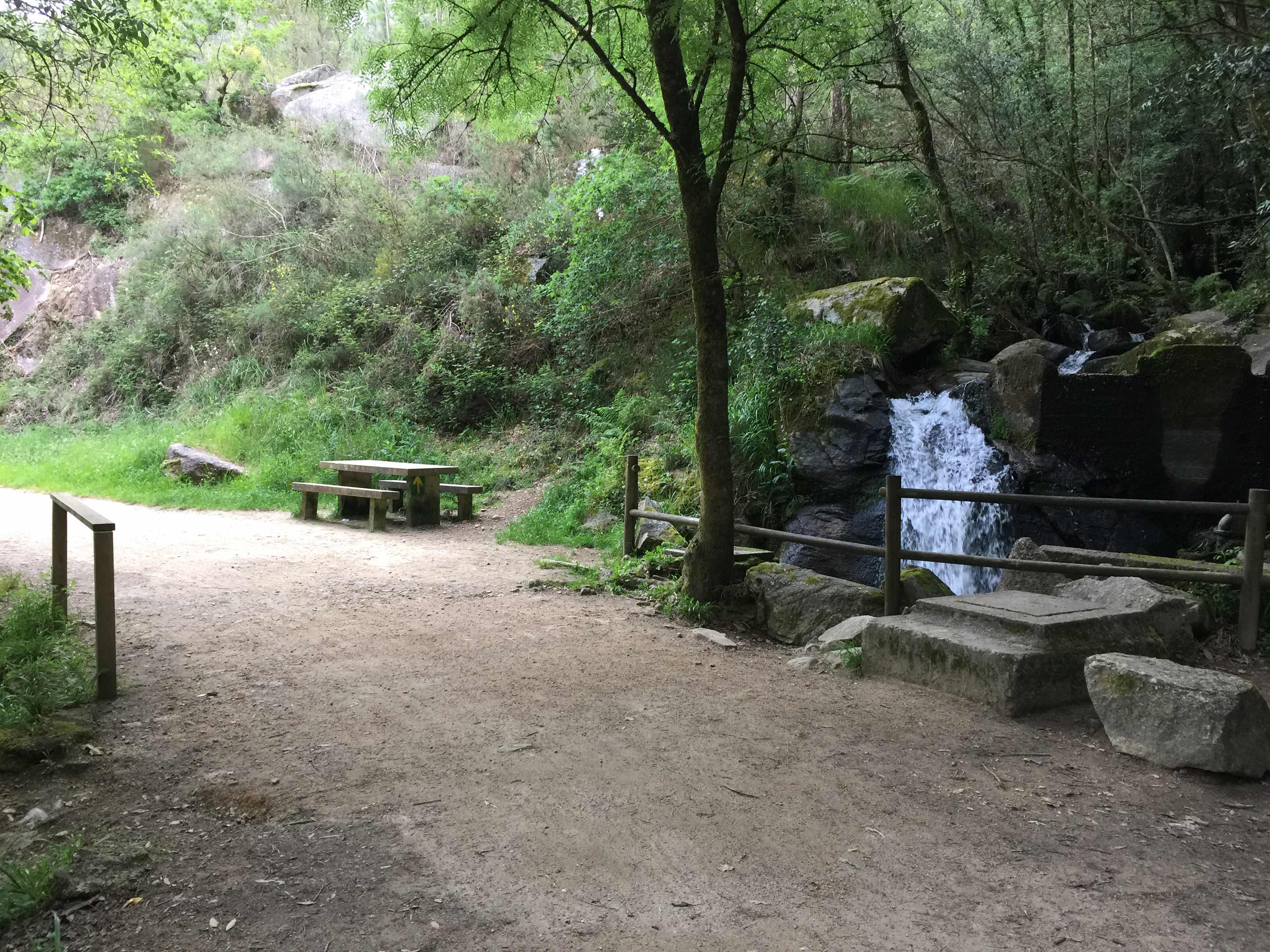 And we were rewarded with a picnic area. 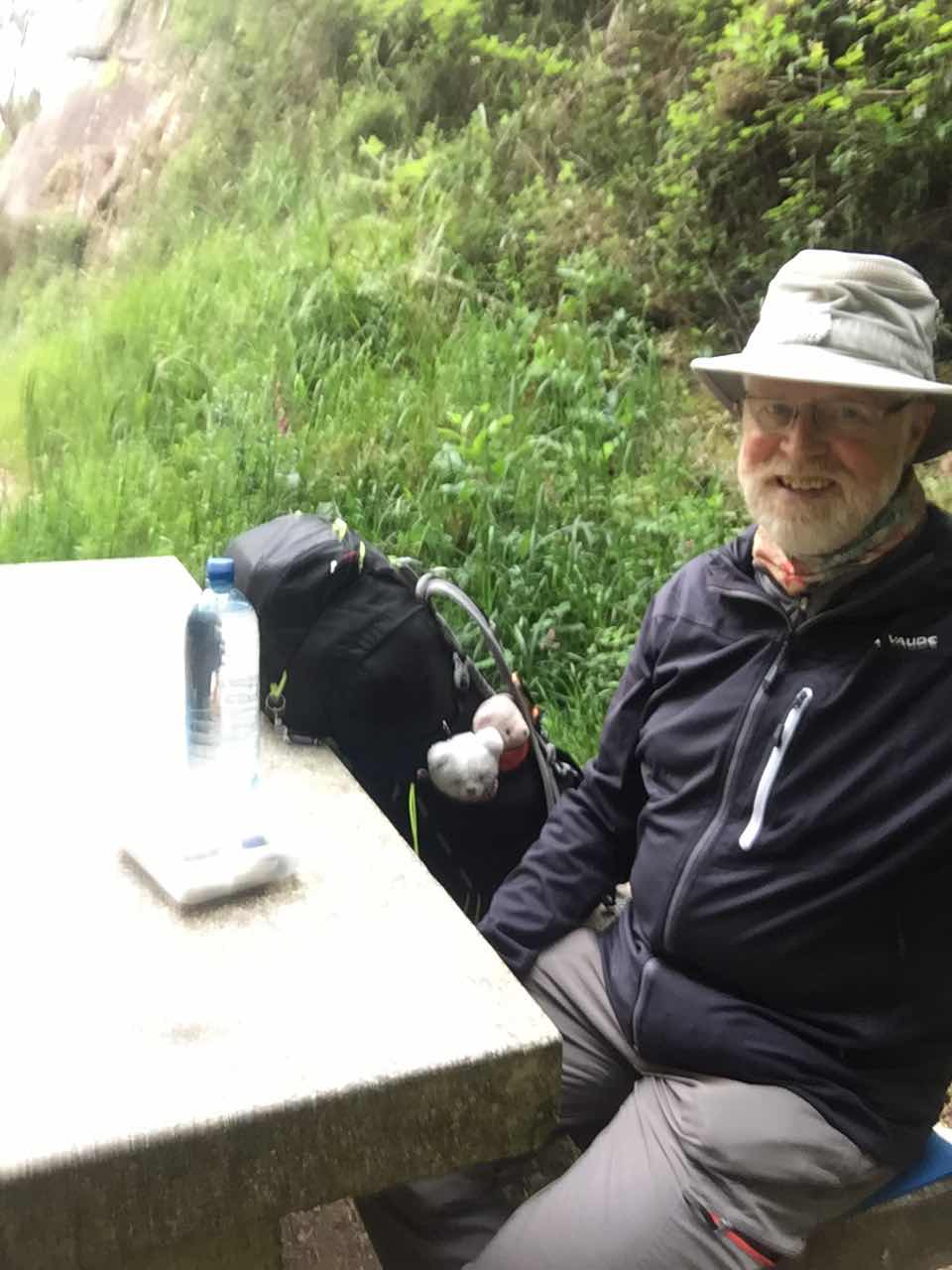 So after some 8 kilometres we stopped for a picnic breakfast. Now four pilgrims passed us, but would have said nothing had not Alan wished them Buen Camino. Only the one woman in the group turned and replied, The males ignored us! The Day as you can see was grey and overcast, but the rain held off till much later after we had arrived at our destination. 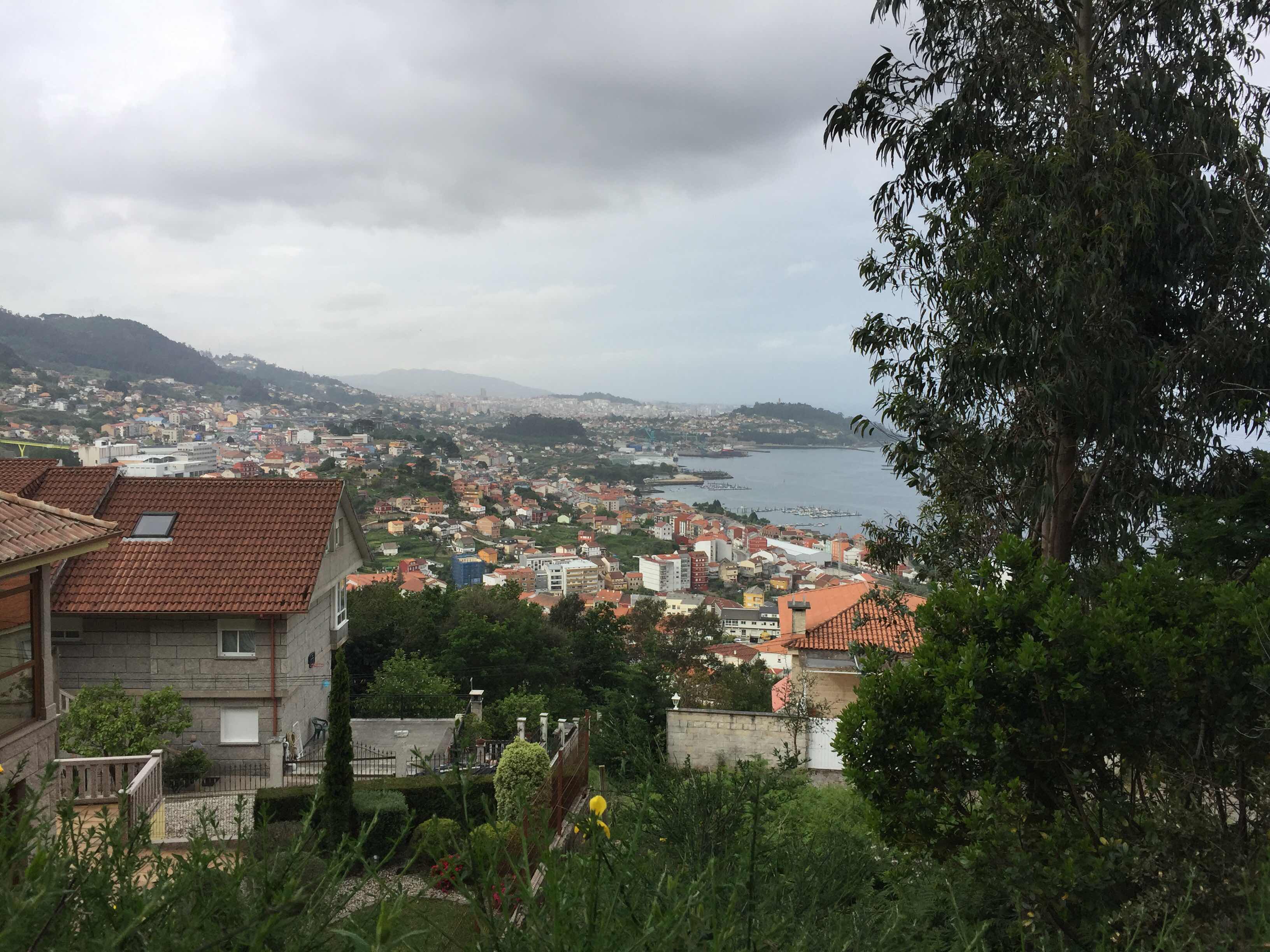 In the distance now one can see Vigo from whence we came. 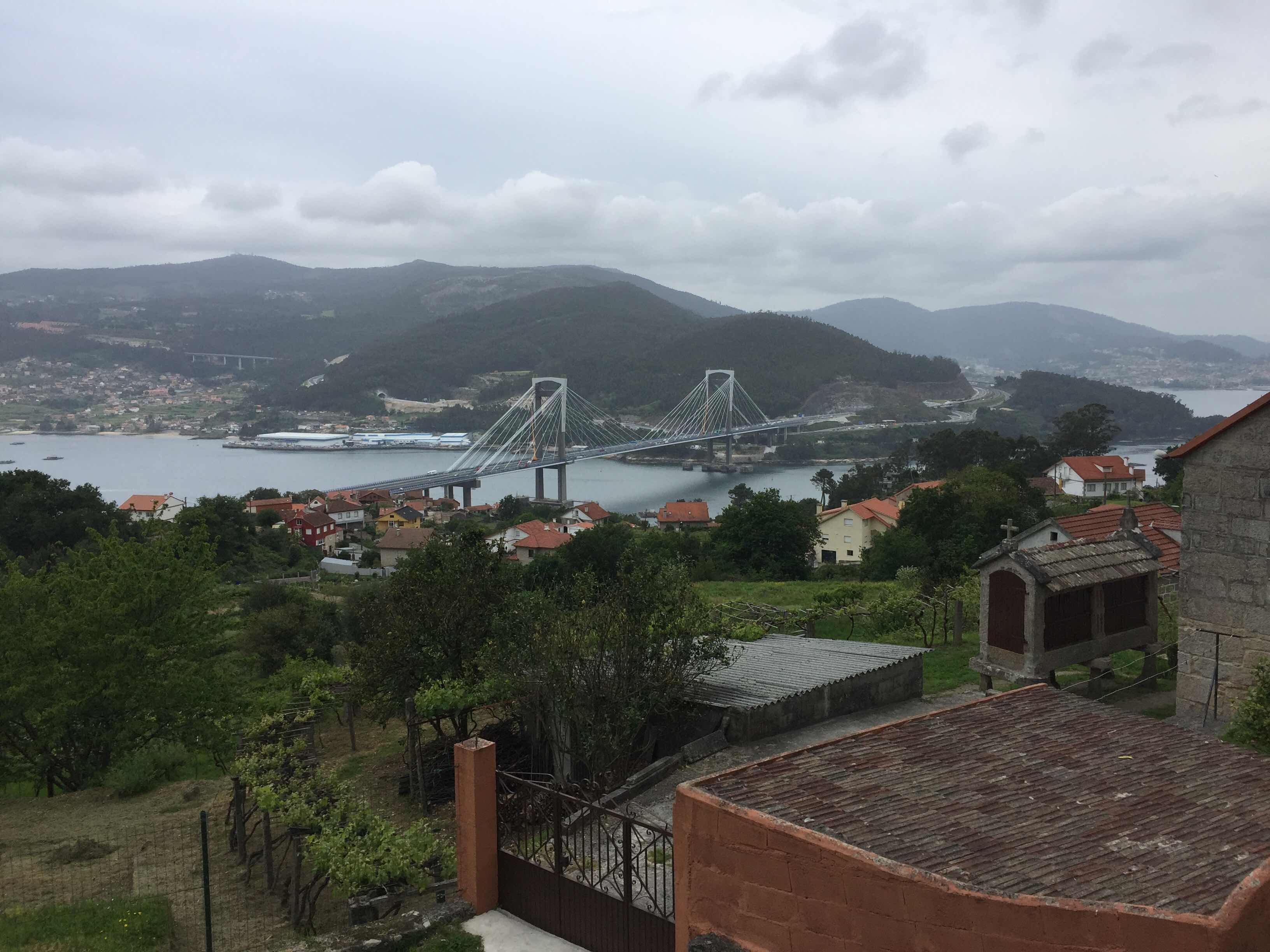 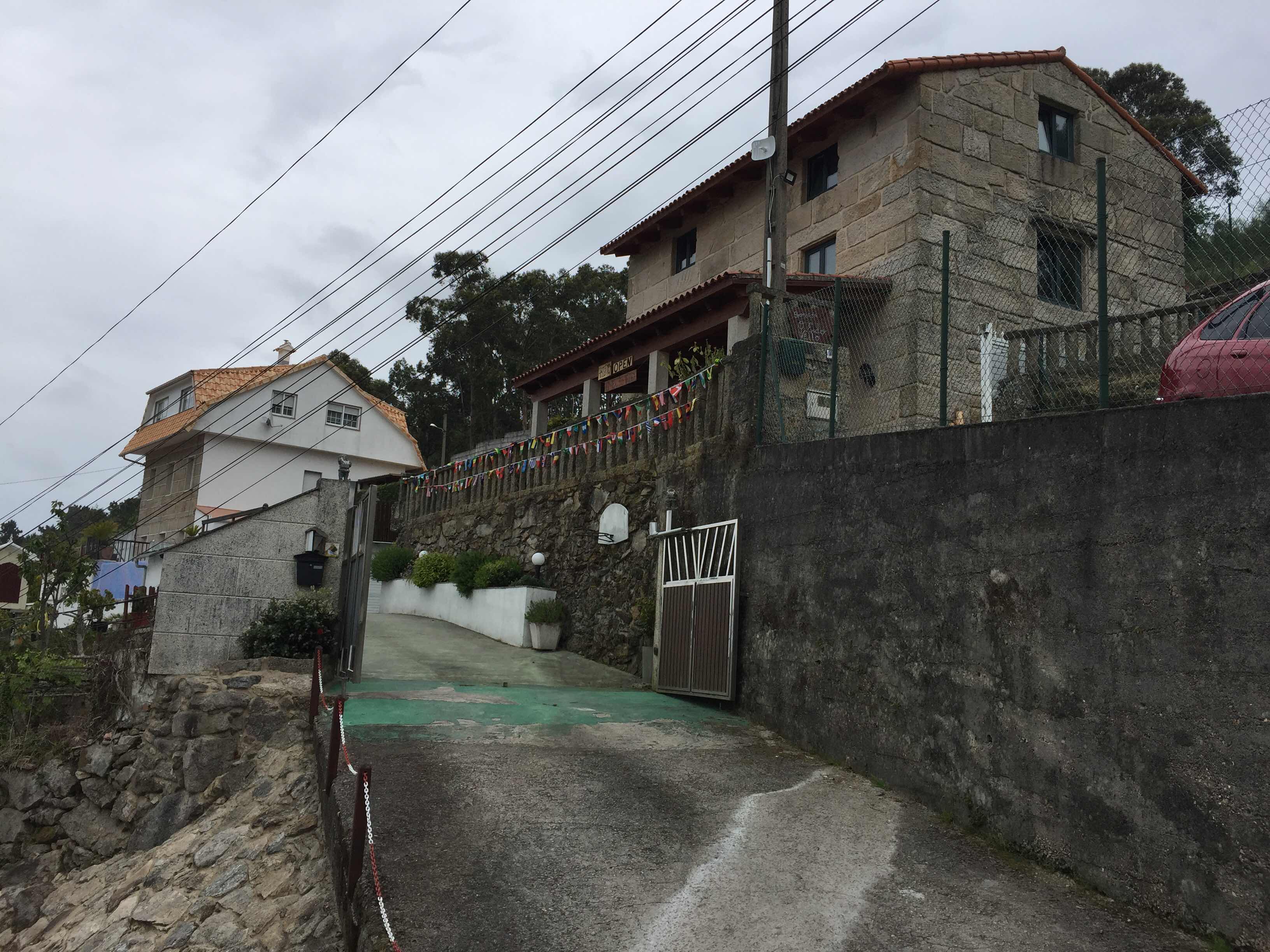 This bar invited one to stop and we needed a toilet stop and WiFi to find out where we were. 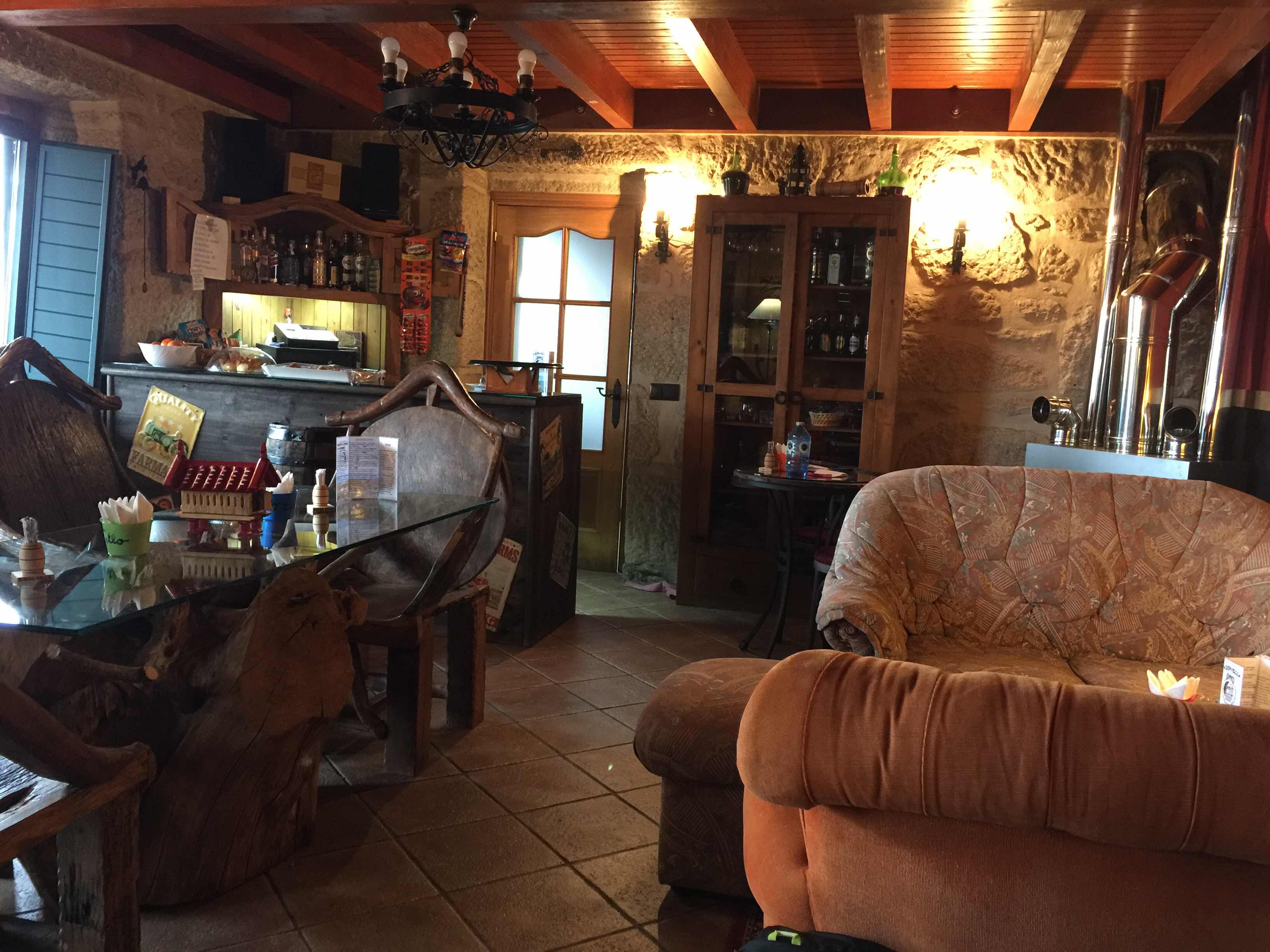 The inside was tastefully done and we enjoya second breakfast. 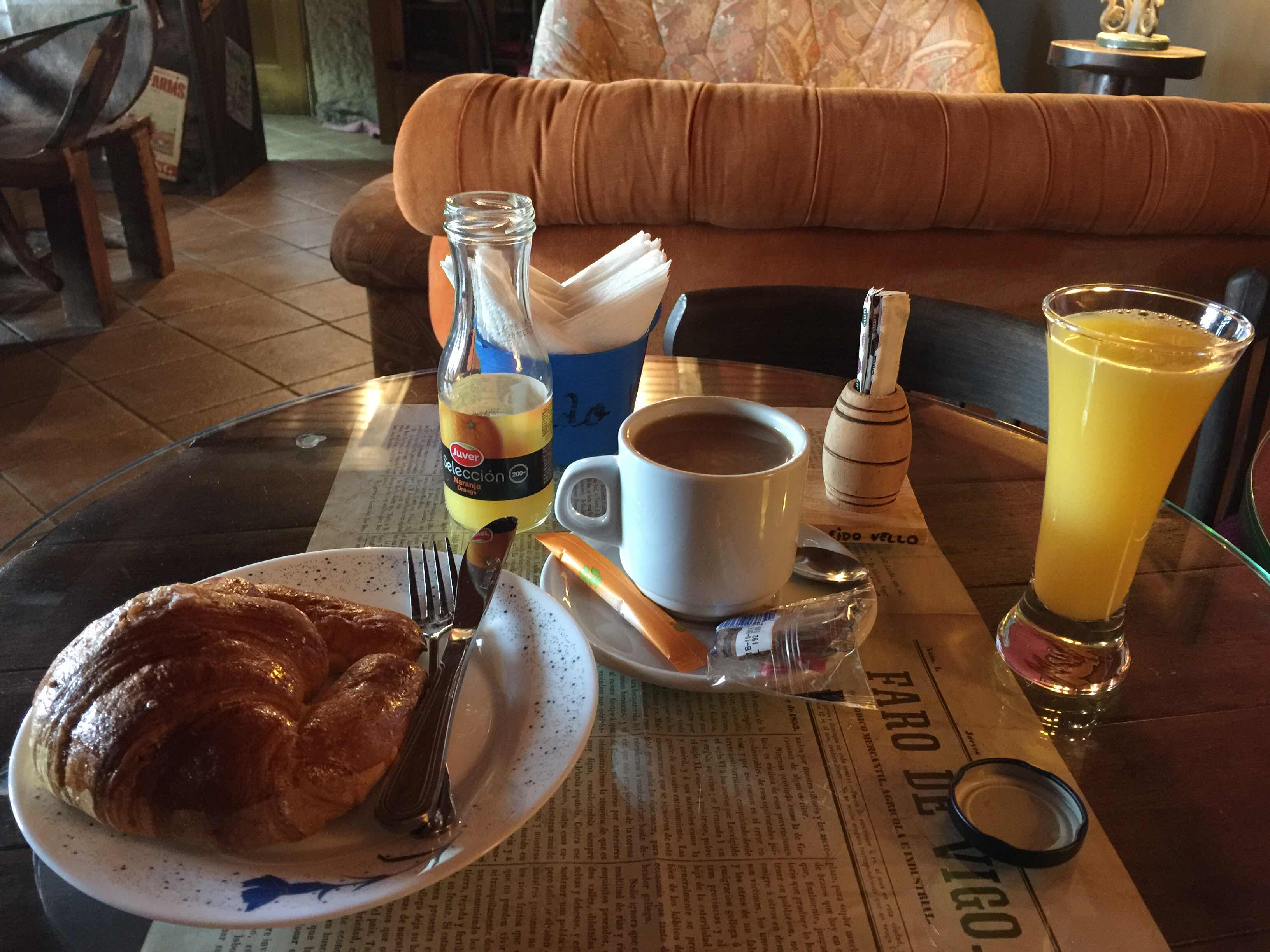 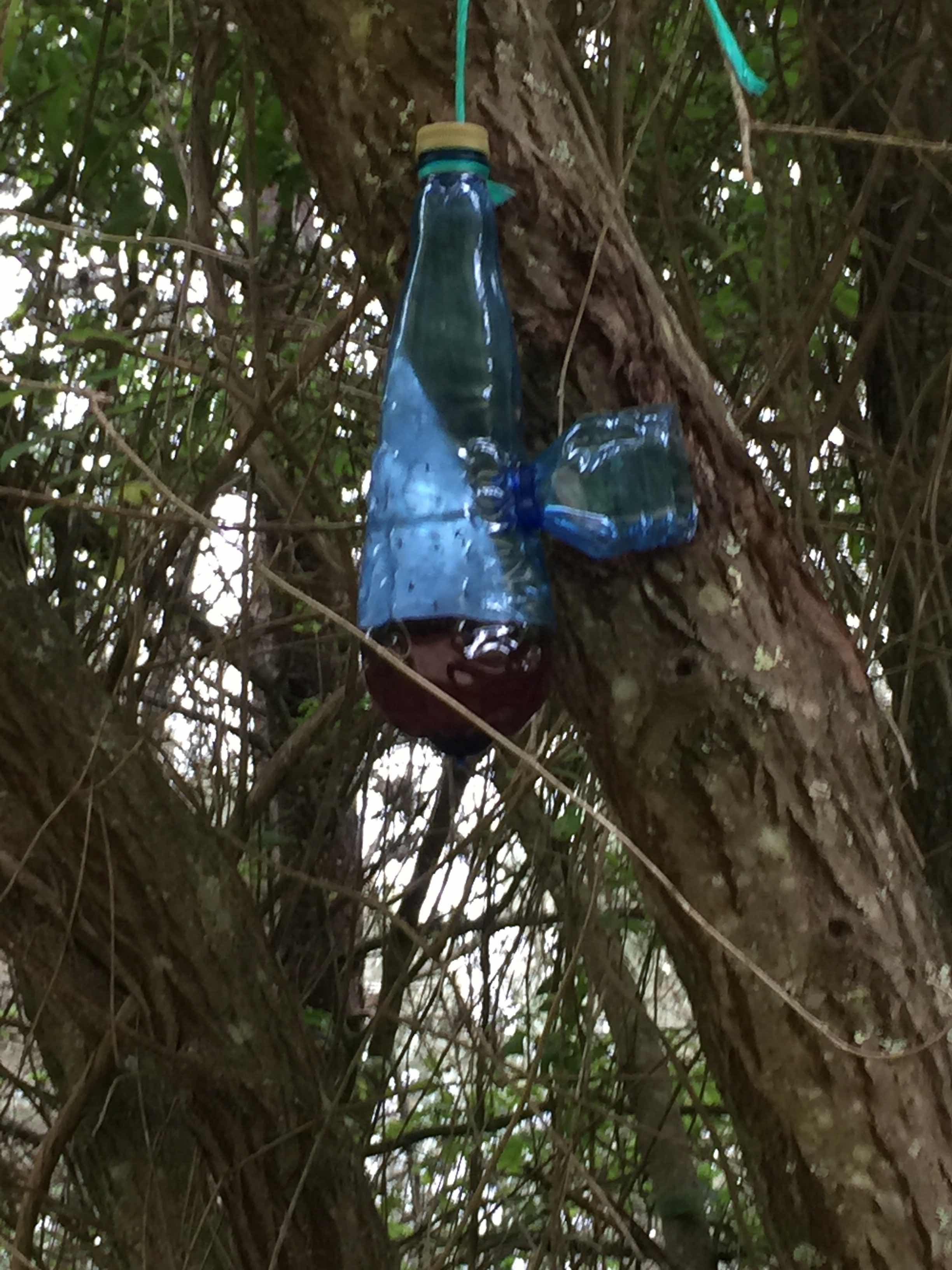 Back in the woods we came across a number of these contraptions! What were they trying to catch and for what purpose? Were they doing a census of insects of bees or wasps? When out and about we always seem to have more questions than answers! 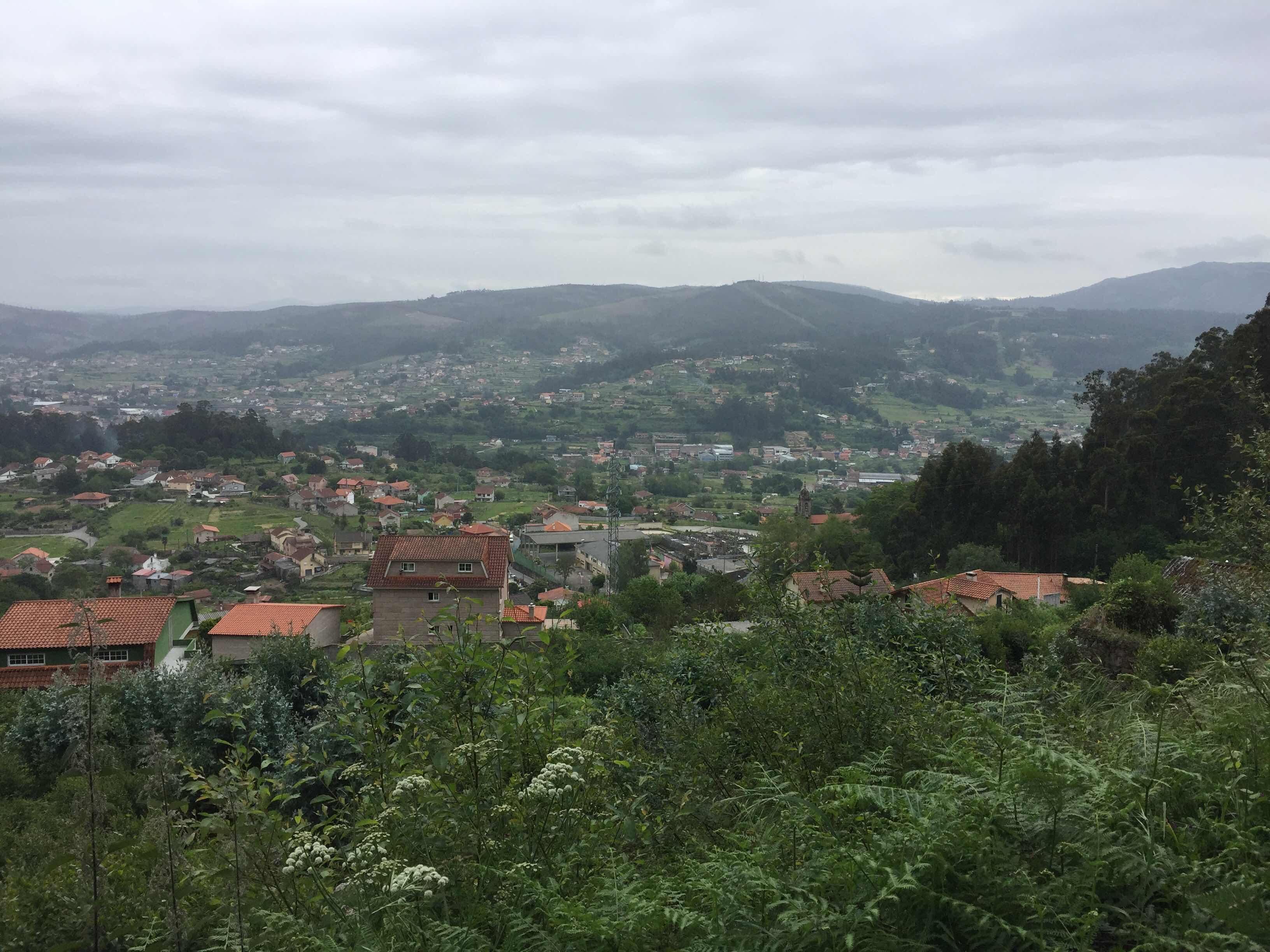 Then we crossed the divide and it was downhill from here. 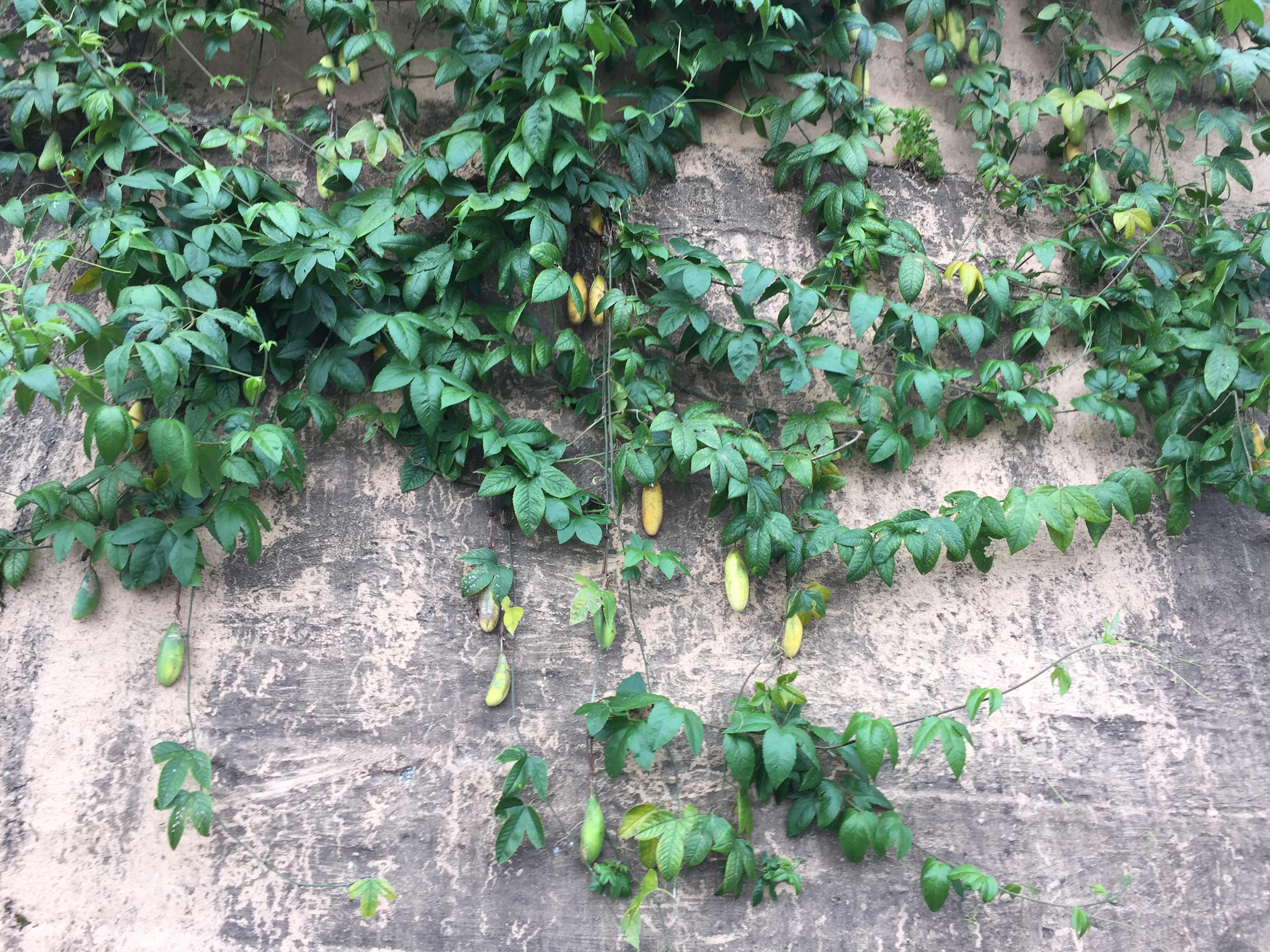 Above this is a house, but what were these and are they edible? 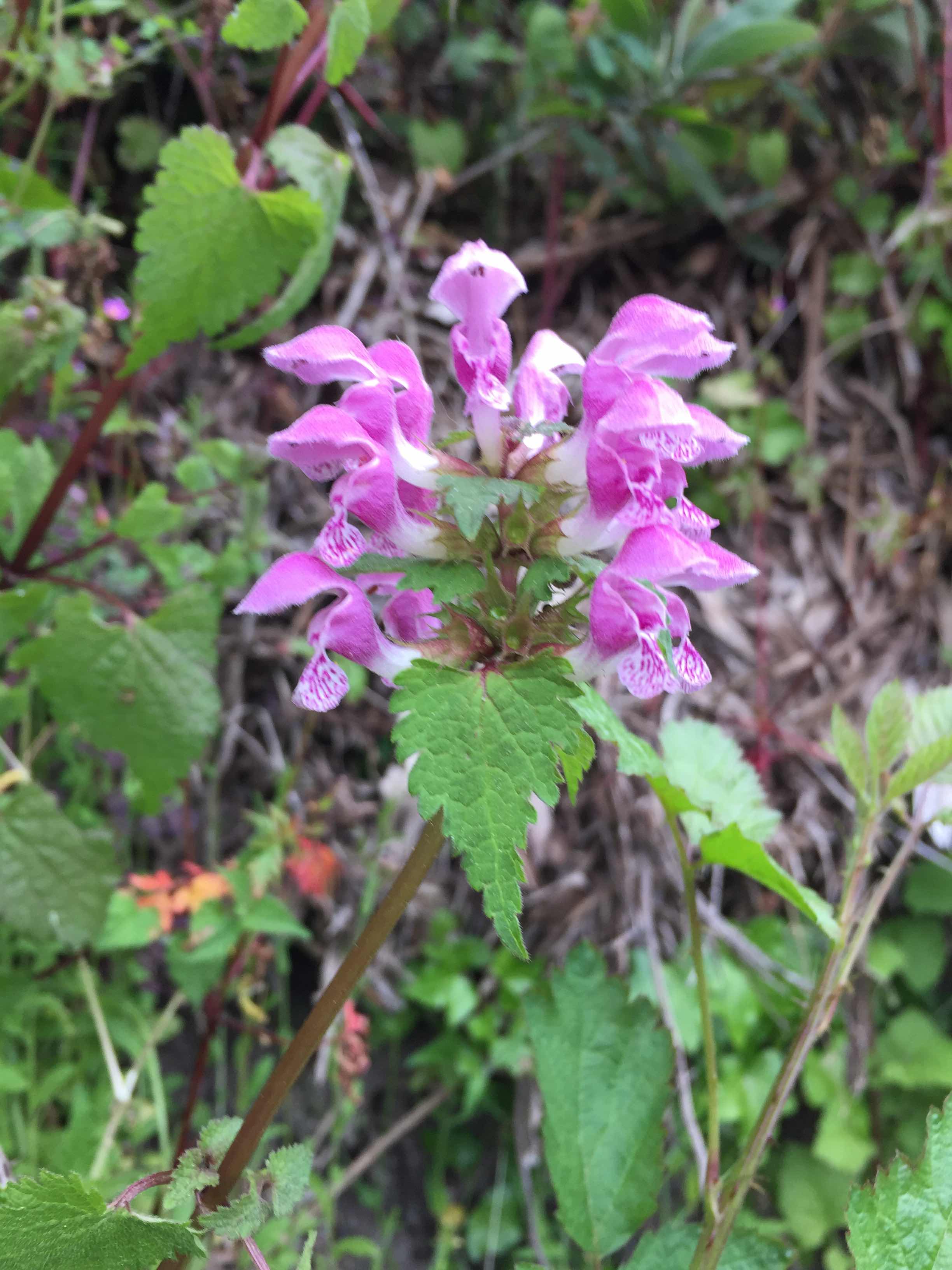 The usual pilgrims fountain as we entered a village 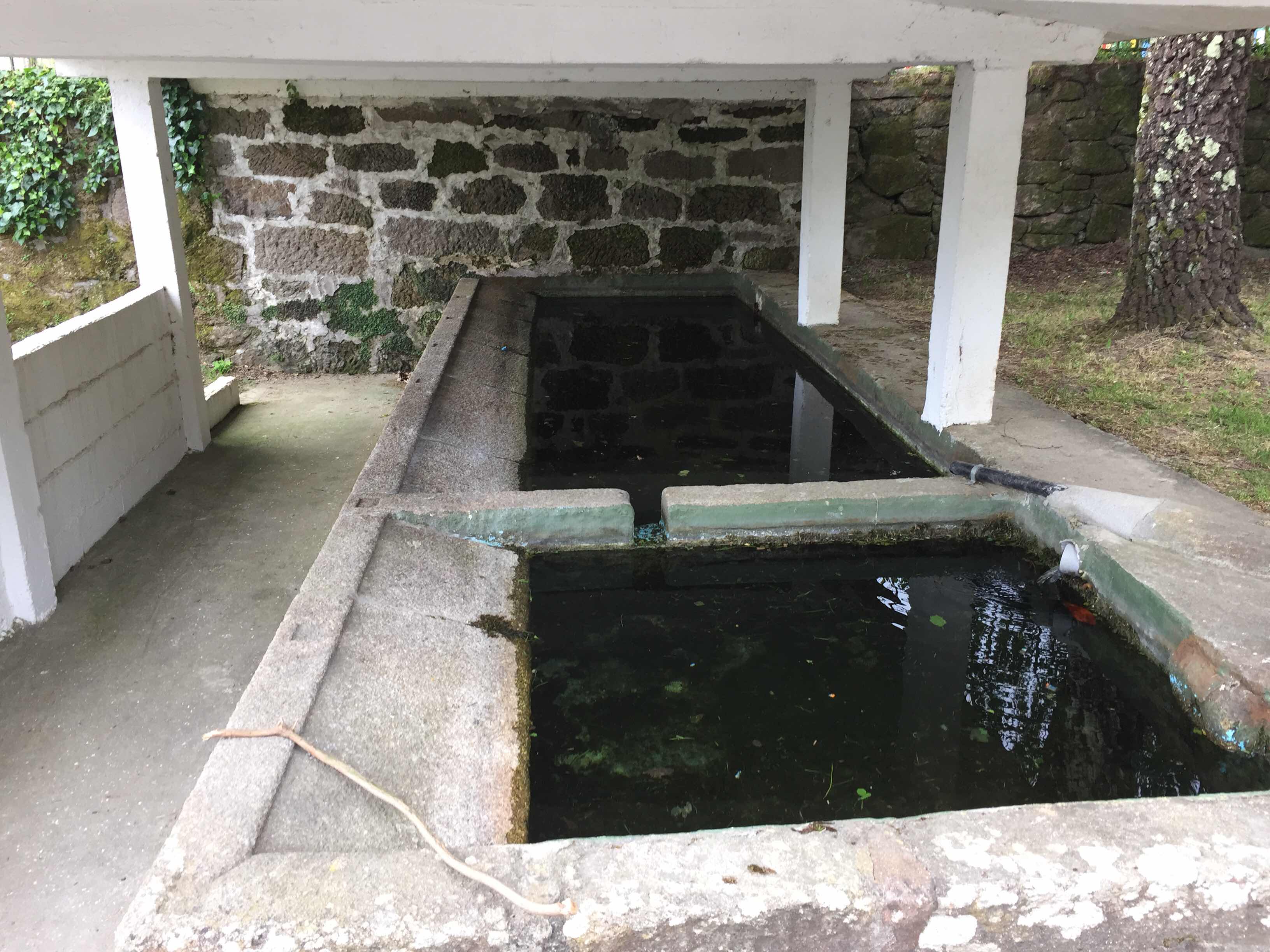 closely followed by the laundry area. 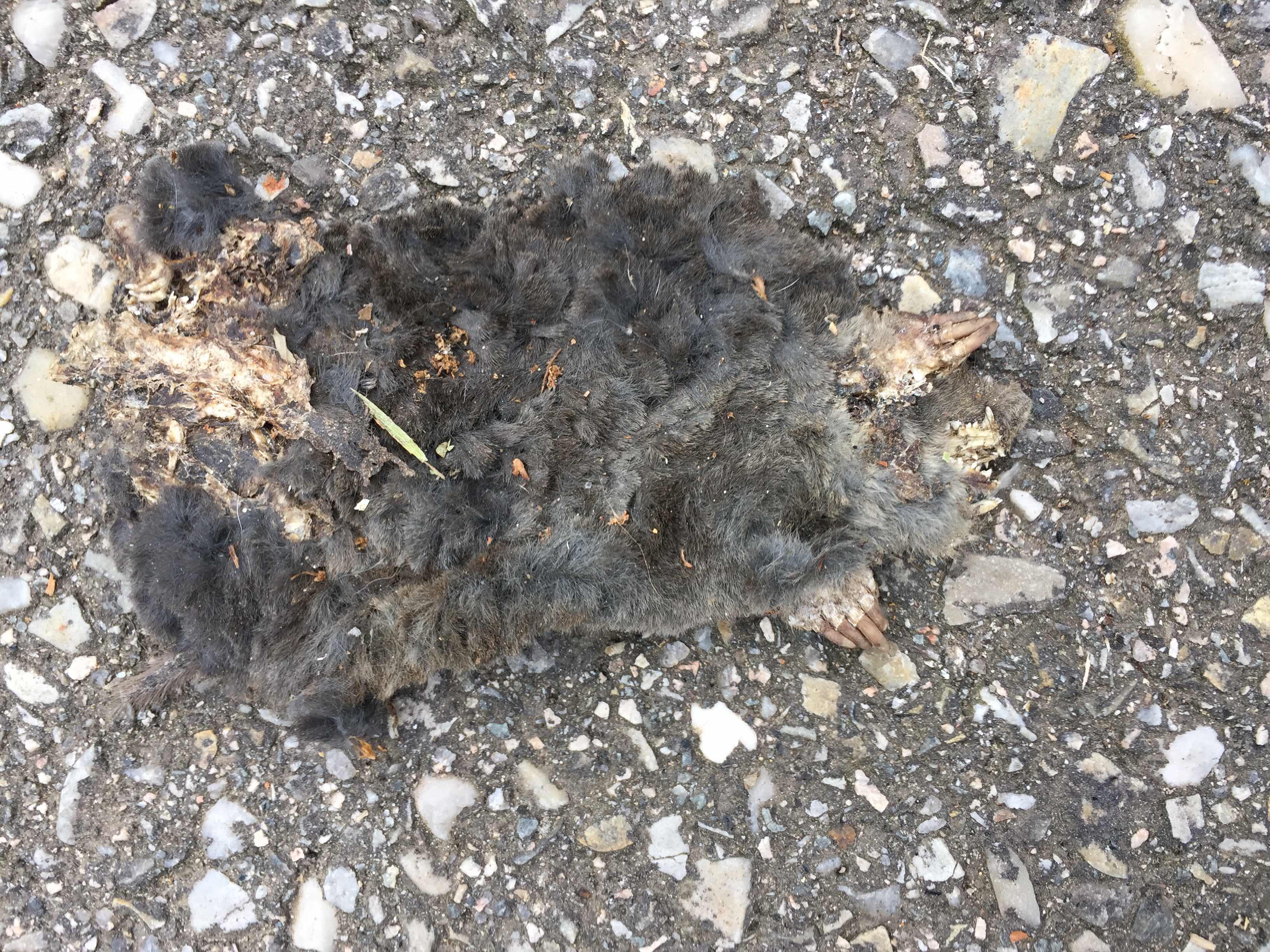 The saddest sight today known as “road kill” was a poor little mole! Our BBF was reminded of a time when he was 12 or 13 and he had helped his grandma’s neighbour dig up and kill a mole. Alan had then asked if he could have the dead thing. He skinned it and with his grandma’s help, she gave him an embroidery frame, he stretched it and cured the skin. He did a good job for he had the skin for ages and it remained soft and pliable. The skinning was the first he had ever done and served him well when it came to getting his German hunting license years later! 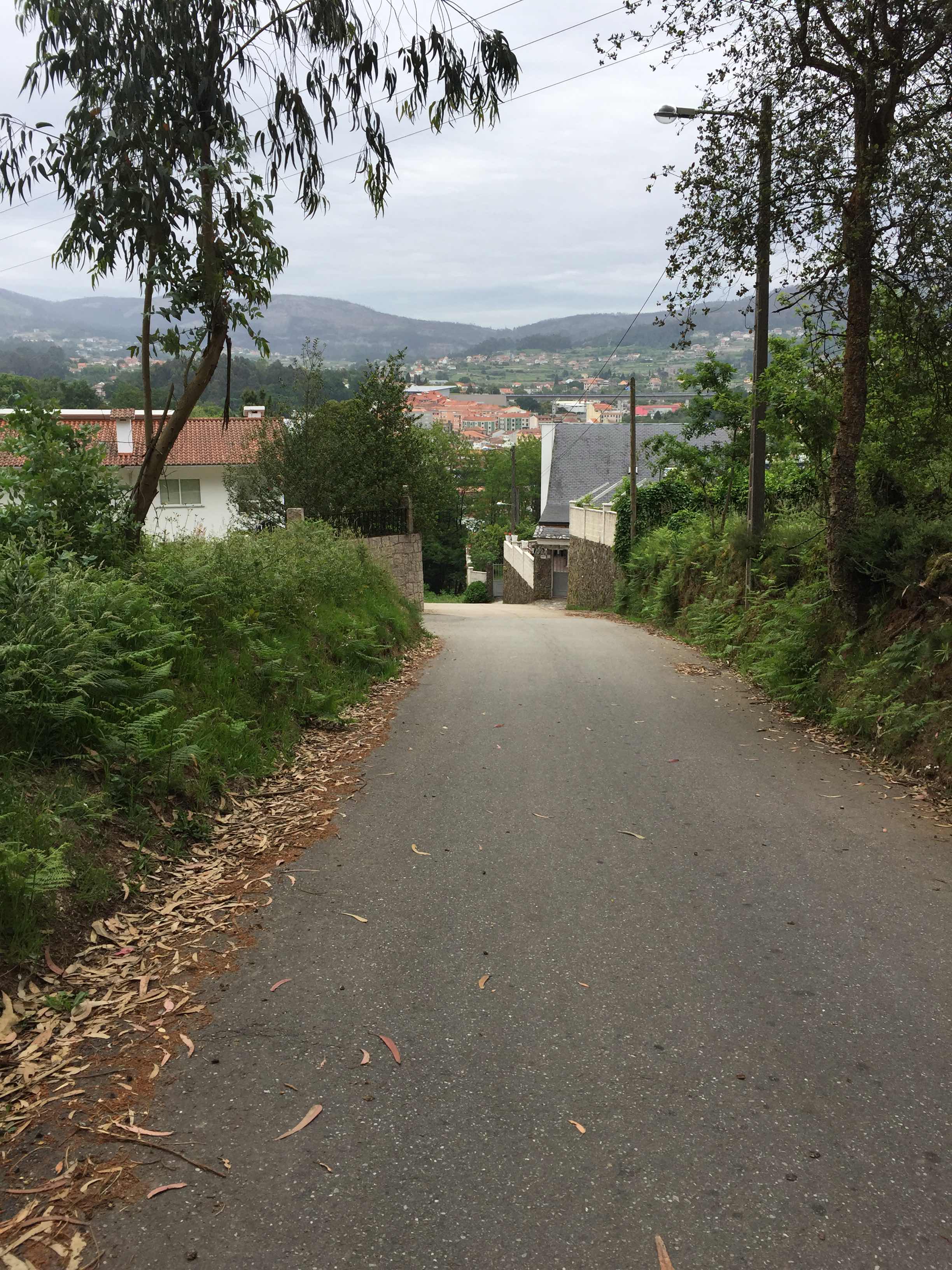 Slowly we descended into town. 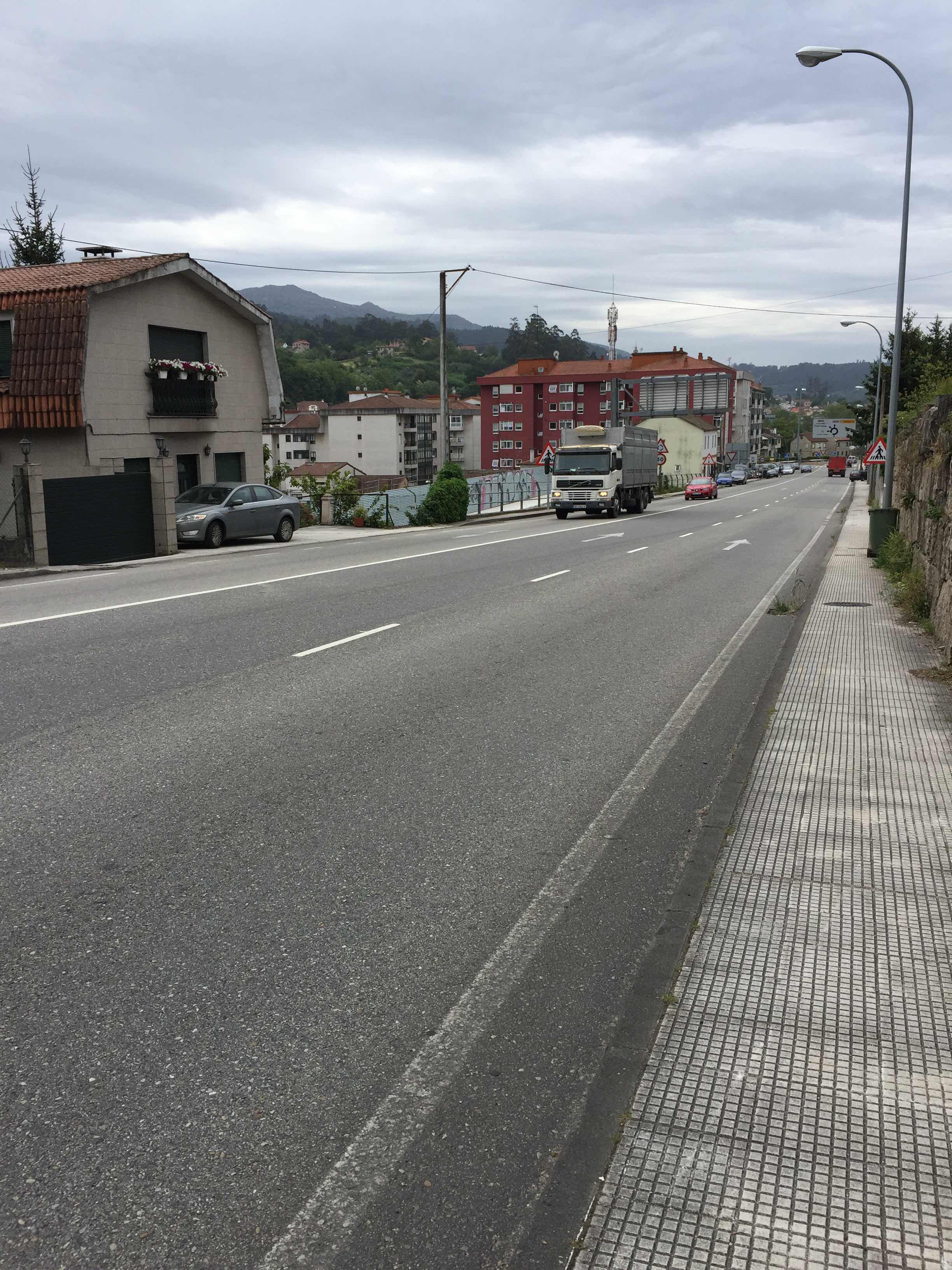 More pilgrims were now seen on the streets as they had come in via the central route through Portugal. 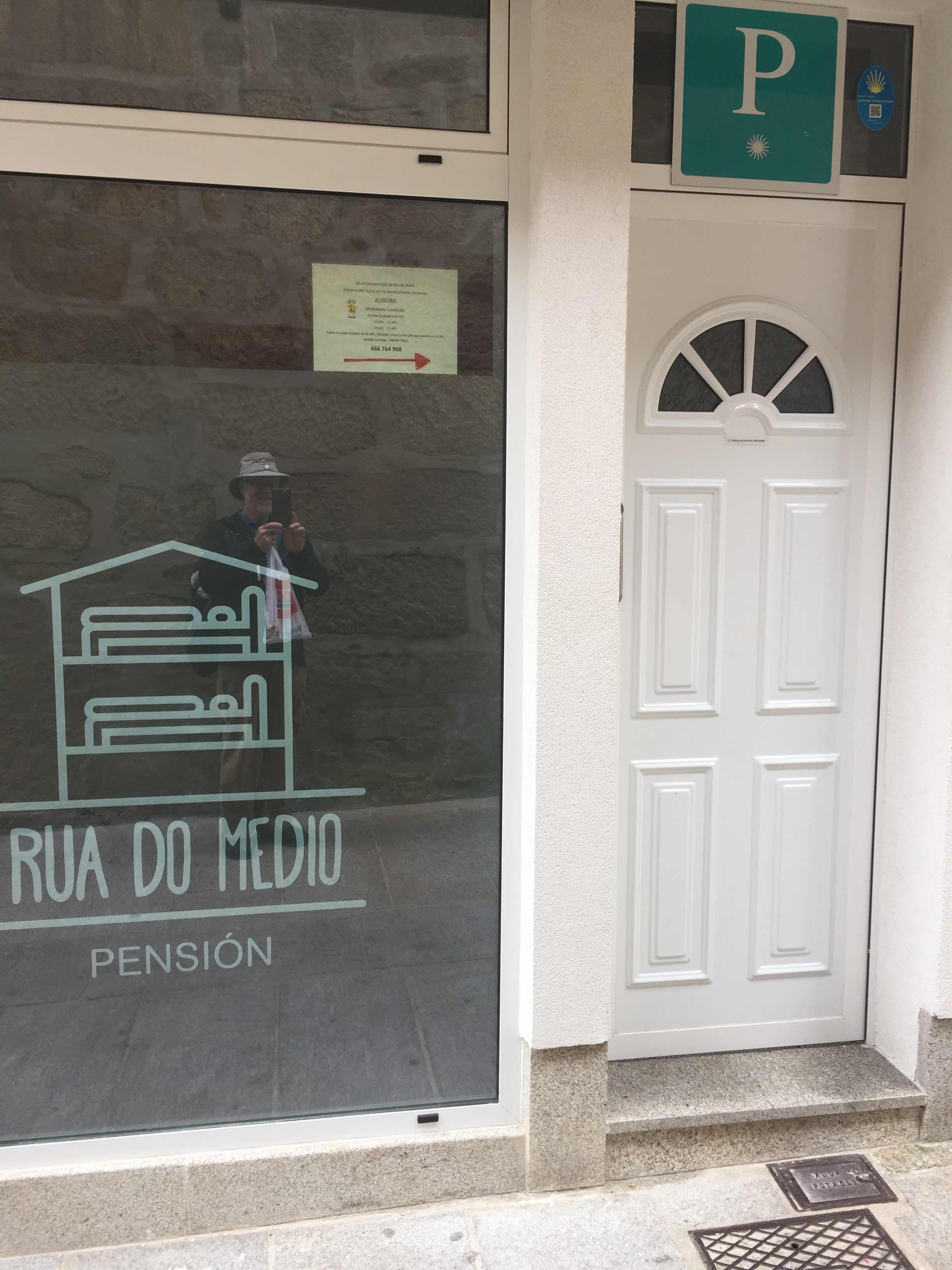 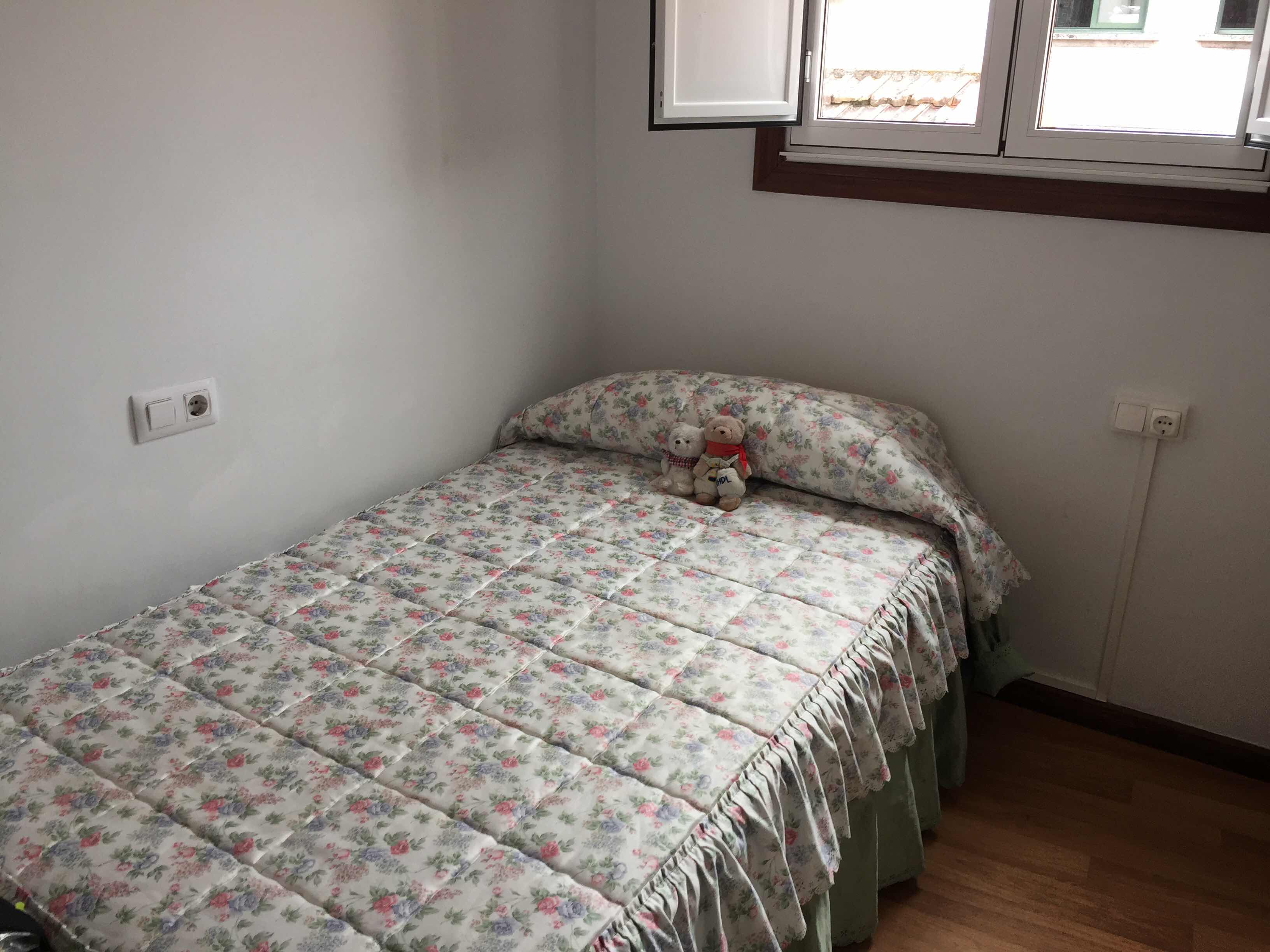 We have the room at the very top of the house and at least a toilet to ourselves. We were the first in so far, showered two floors down. Did the washing and then went in search of lunch. We did some 16 kilometres today, but will walk further each of the next two days at least.
Alan spent time planning the last stages of our Camino and is now a happy Teddy! Buen Camino 🐻❤️