The forecast before we set off this morning was for heavy showers. Consequently our BBF prepared for it! His rain trousers, over- shoes and helmet cover were placed in readiness in the basket. We had to travel in the backpack which also had its cover on. 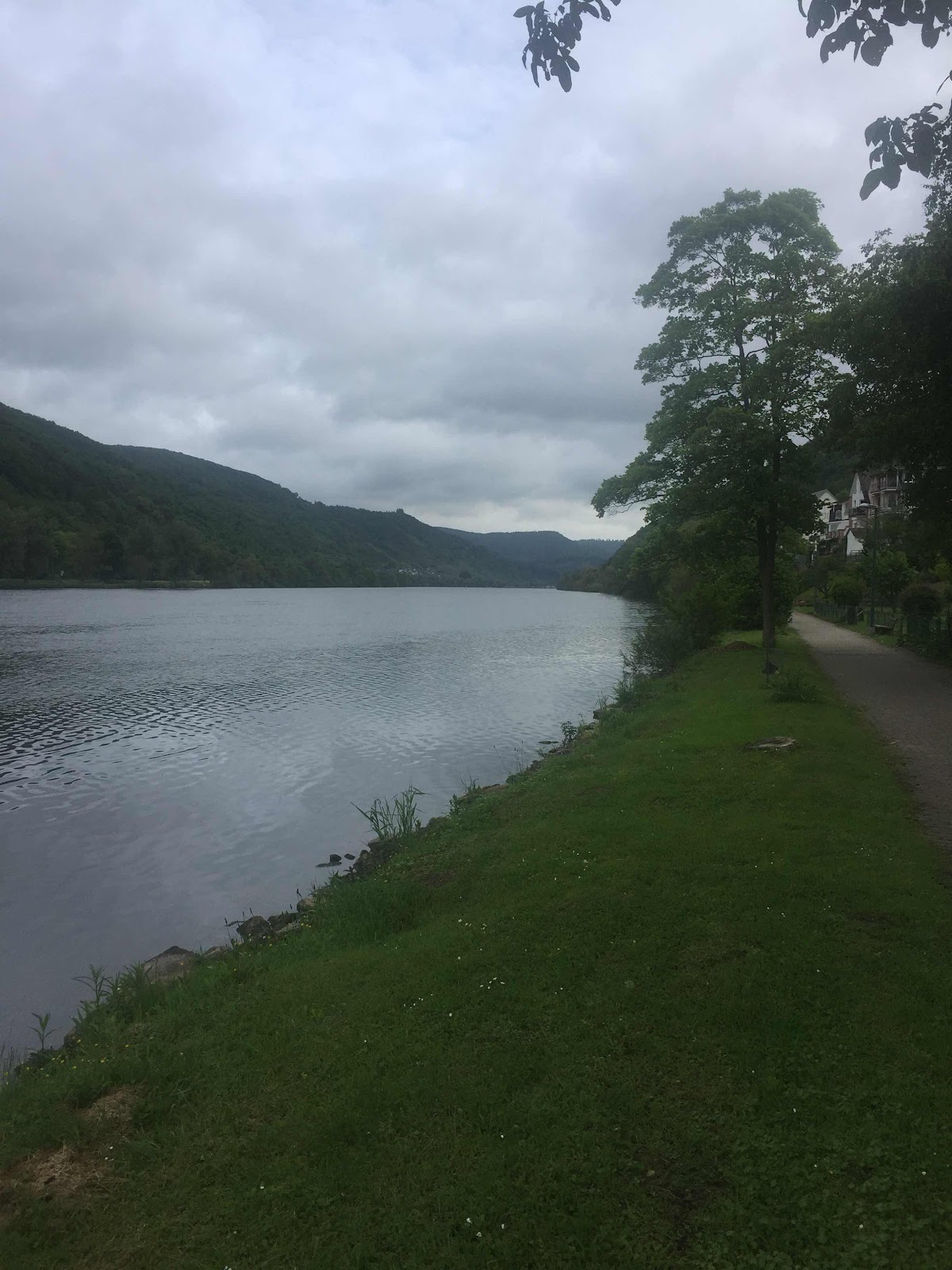 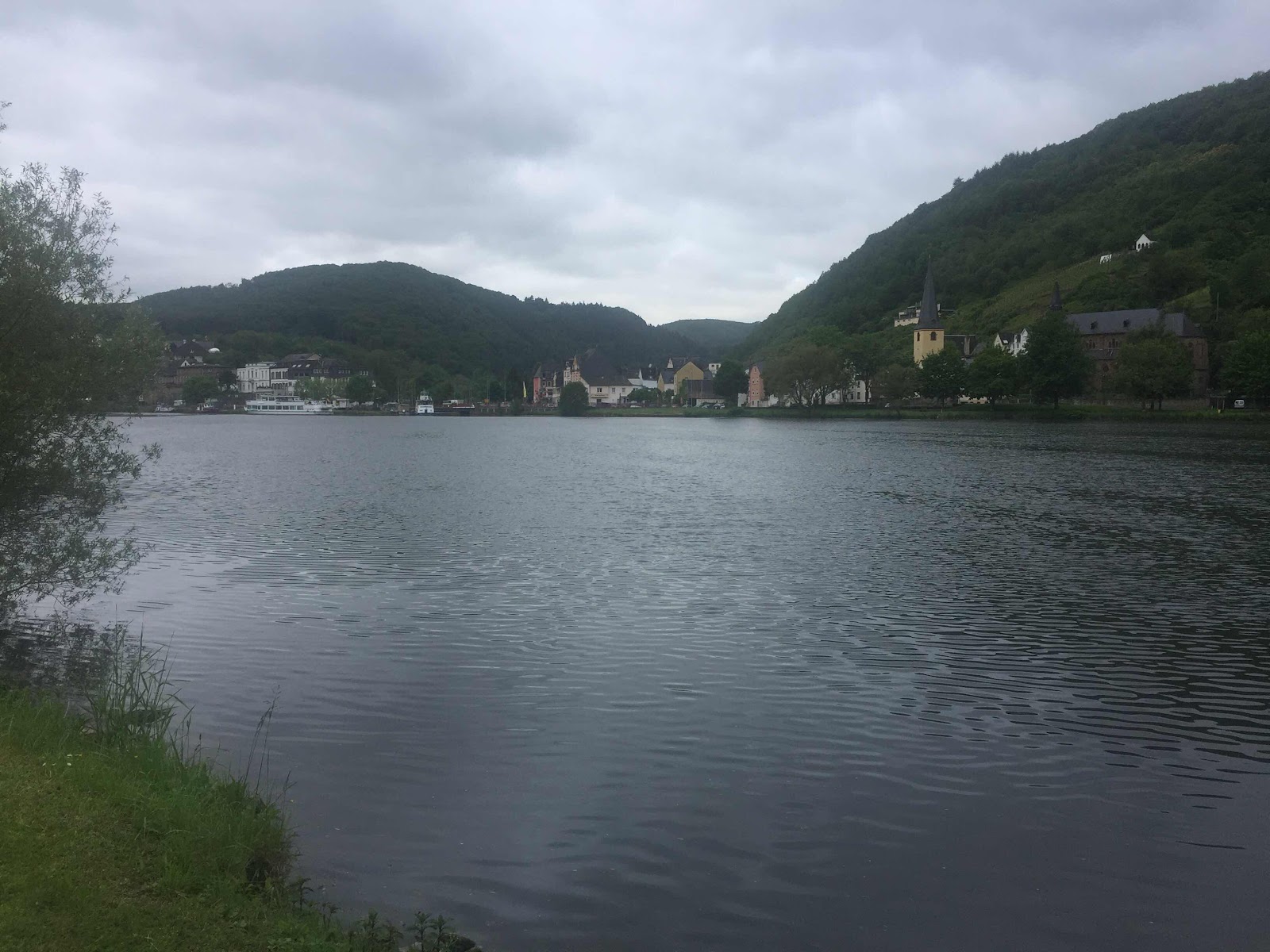 It didn’t matter in which direction you looked the clouds looked ominous! The going was easy and Alan set a good pace. His idea was to get to Koblenz, weather permitting today, some 86 kms away.
We stuck to the right bank of the river which we knew was shorter than the route on the left bank and that it World take us on unpaved tracks through two nature reserves. This old Abbey at Stuben was just along the start of our first unpaved section.
At one stage in the morning it attempted to rain, but this fortunately came to nothing more than a few drops.
There were few cyclists about so we made good progress at 22-25 km/h. 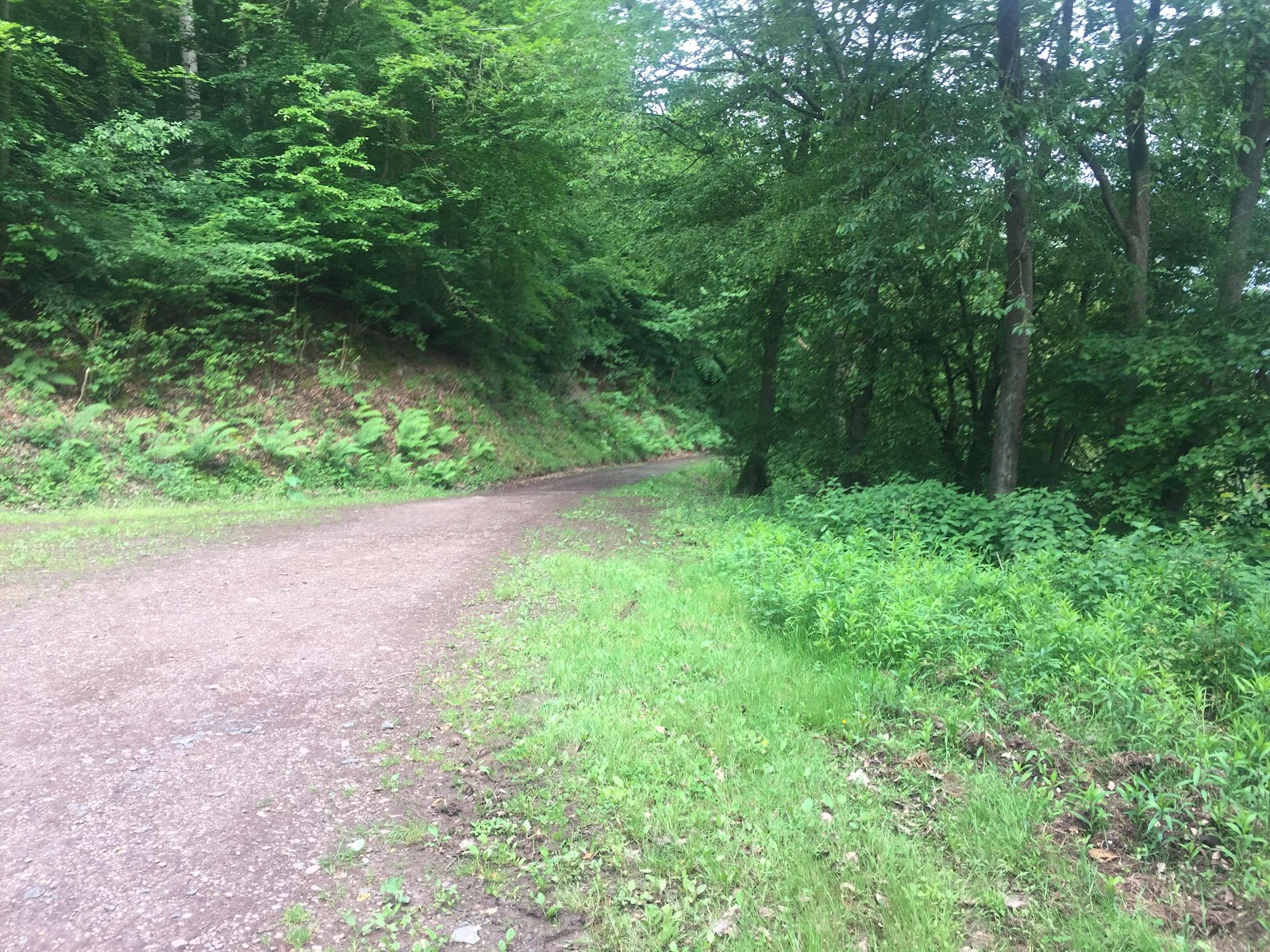 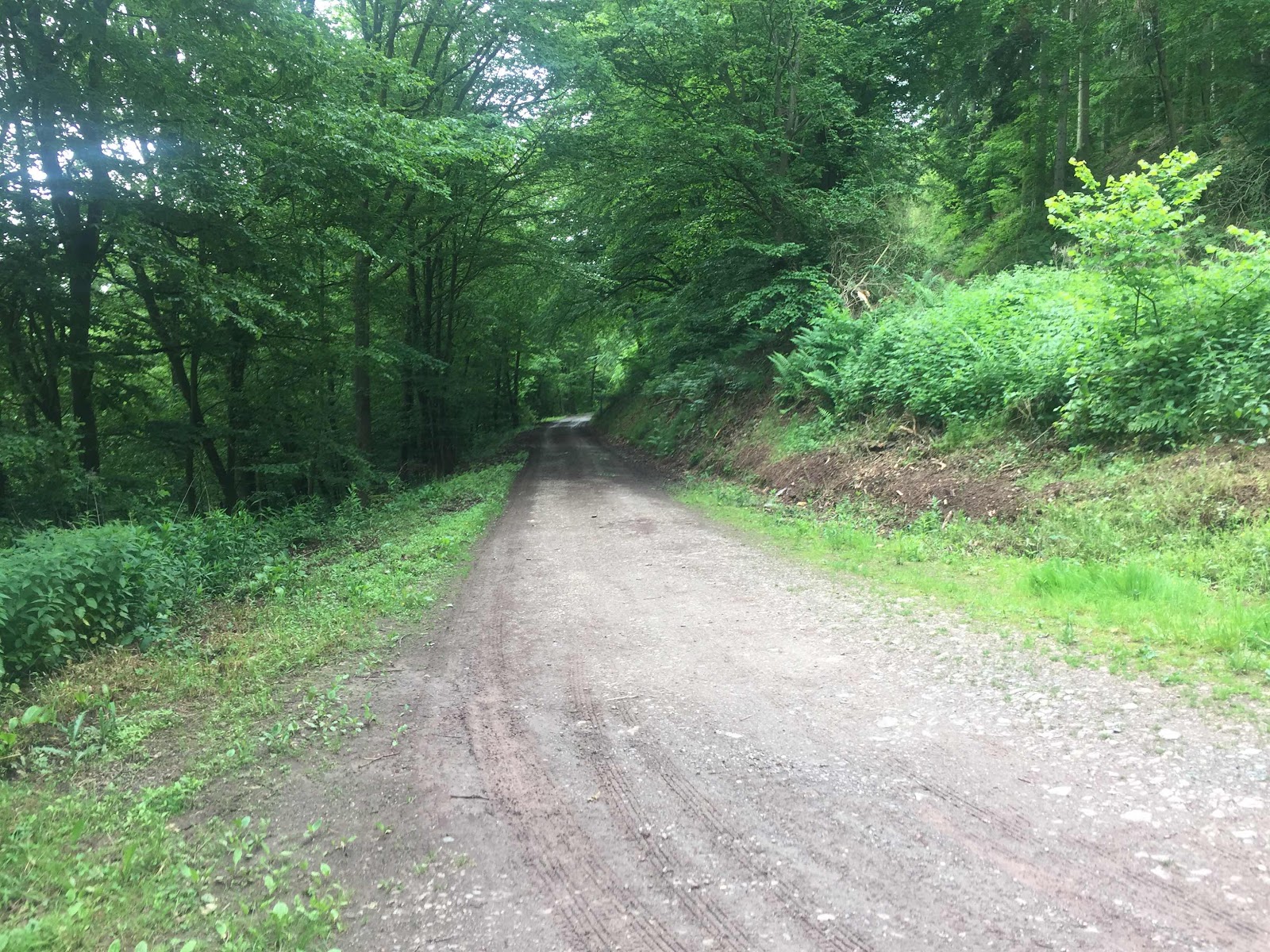 This first woodland section the track was quite good though sometimes bumpy. 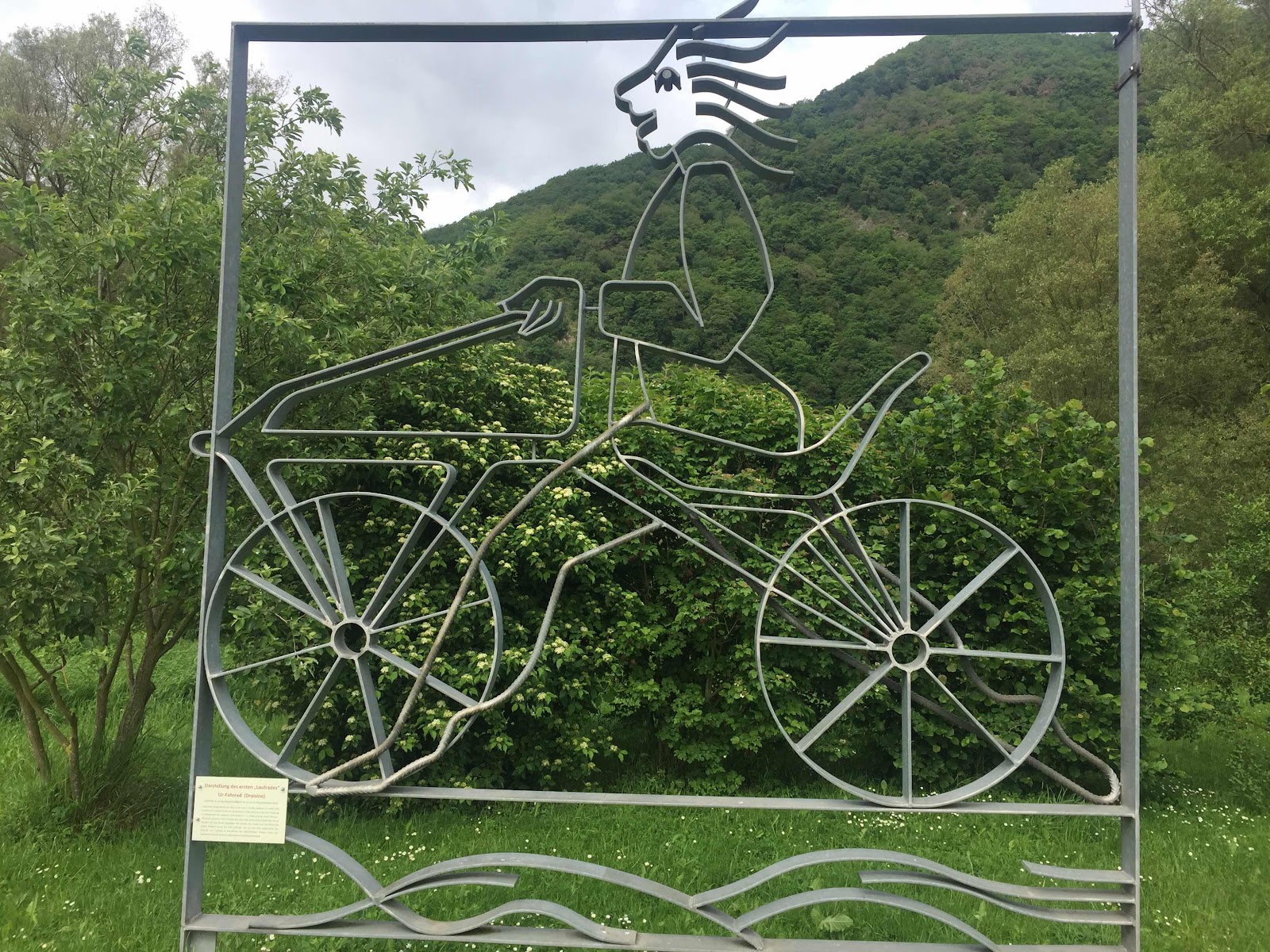 There was a bench by this Motiv of the first cyclist so we stopped for a short break after some 25 kms or so. 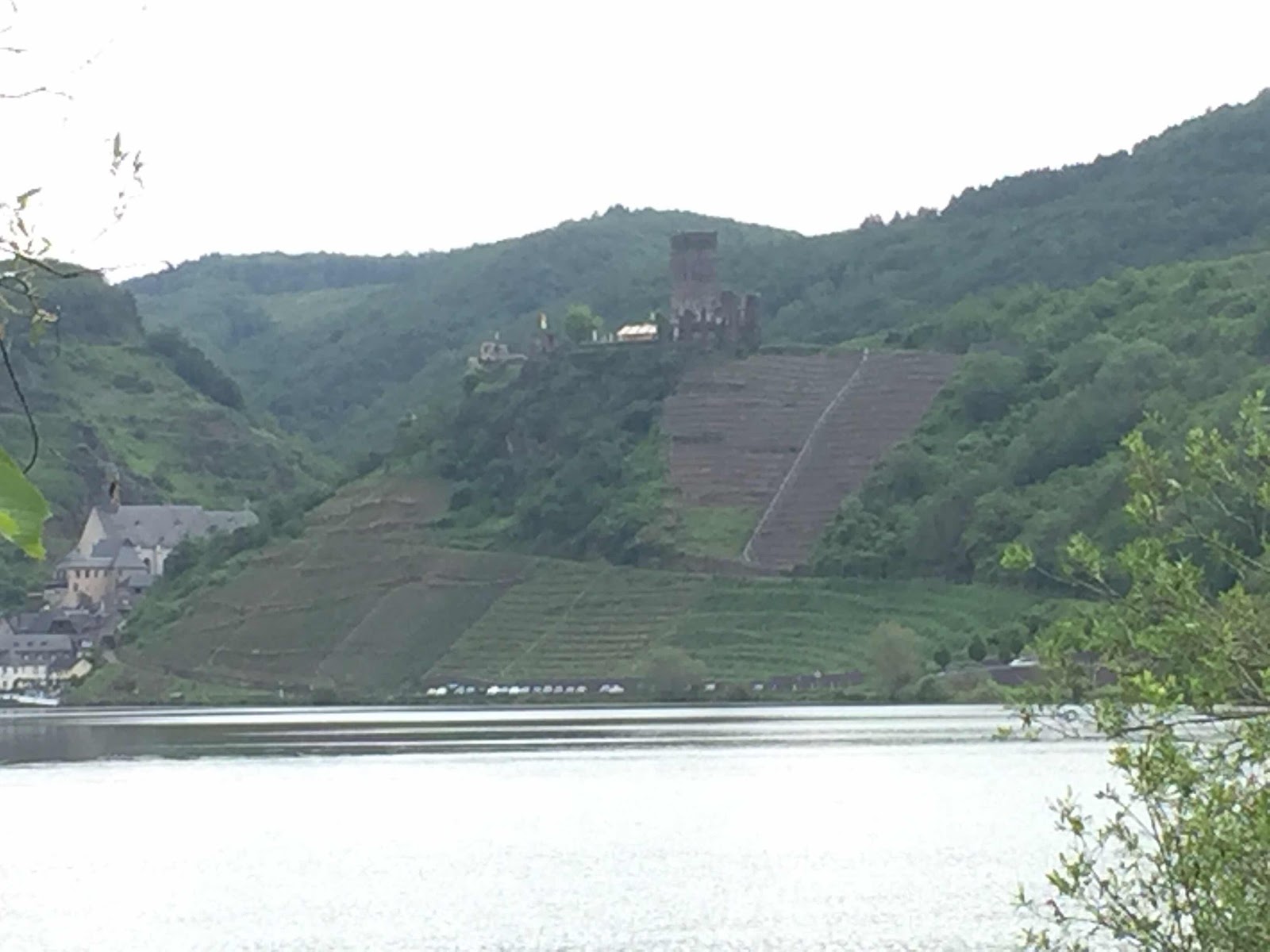 There were quite a few castles on the route, some more ruin than fort others more impressive dwelling places. 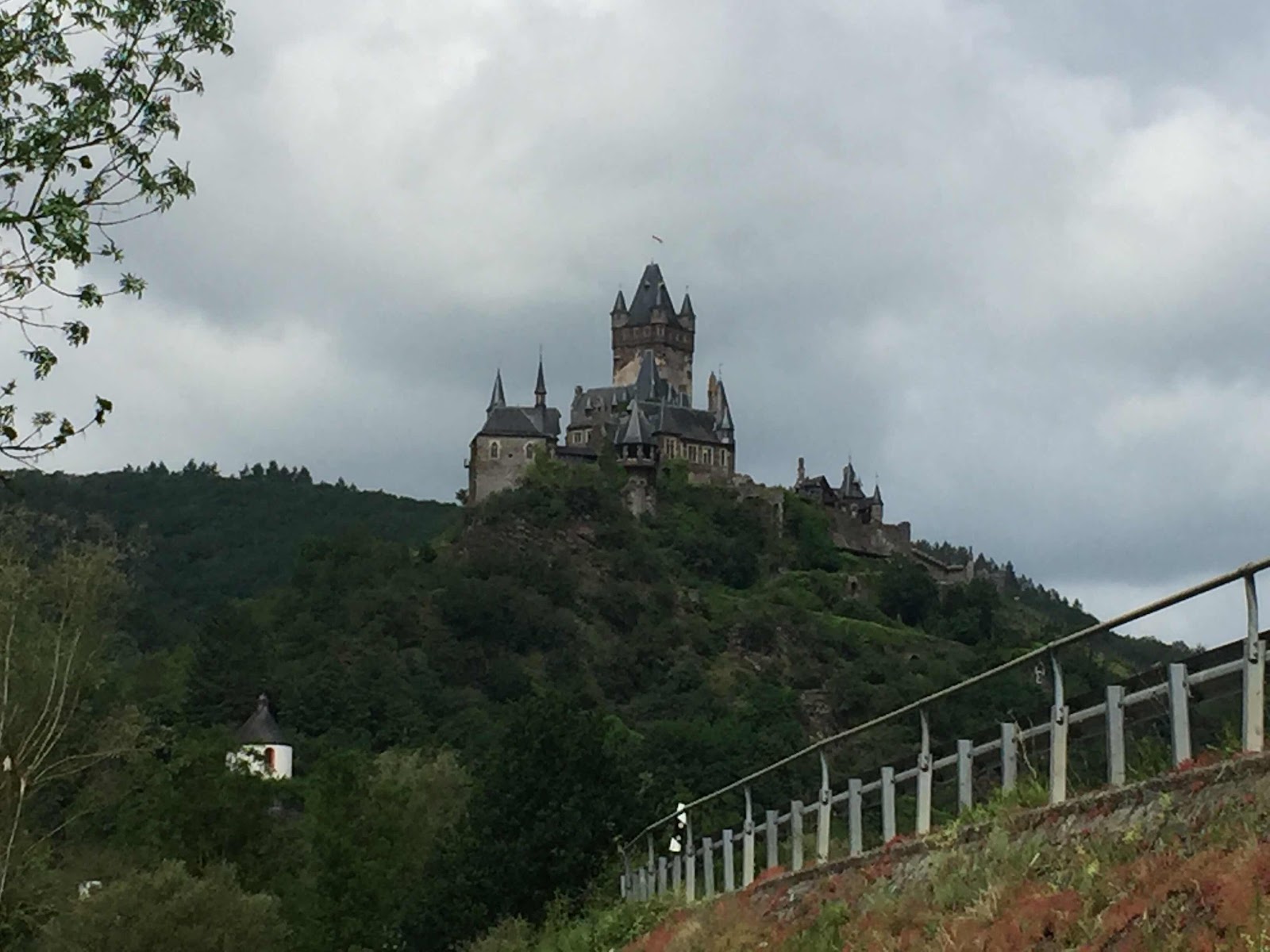 The sky was still not good looking so we only stopped long enough to take a picture. 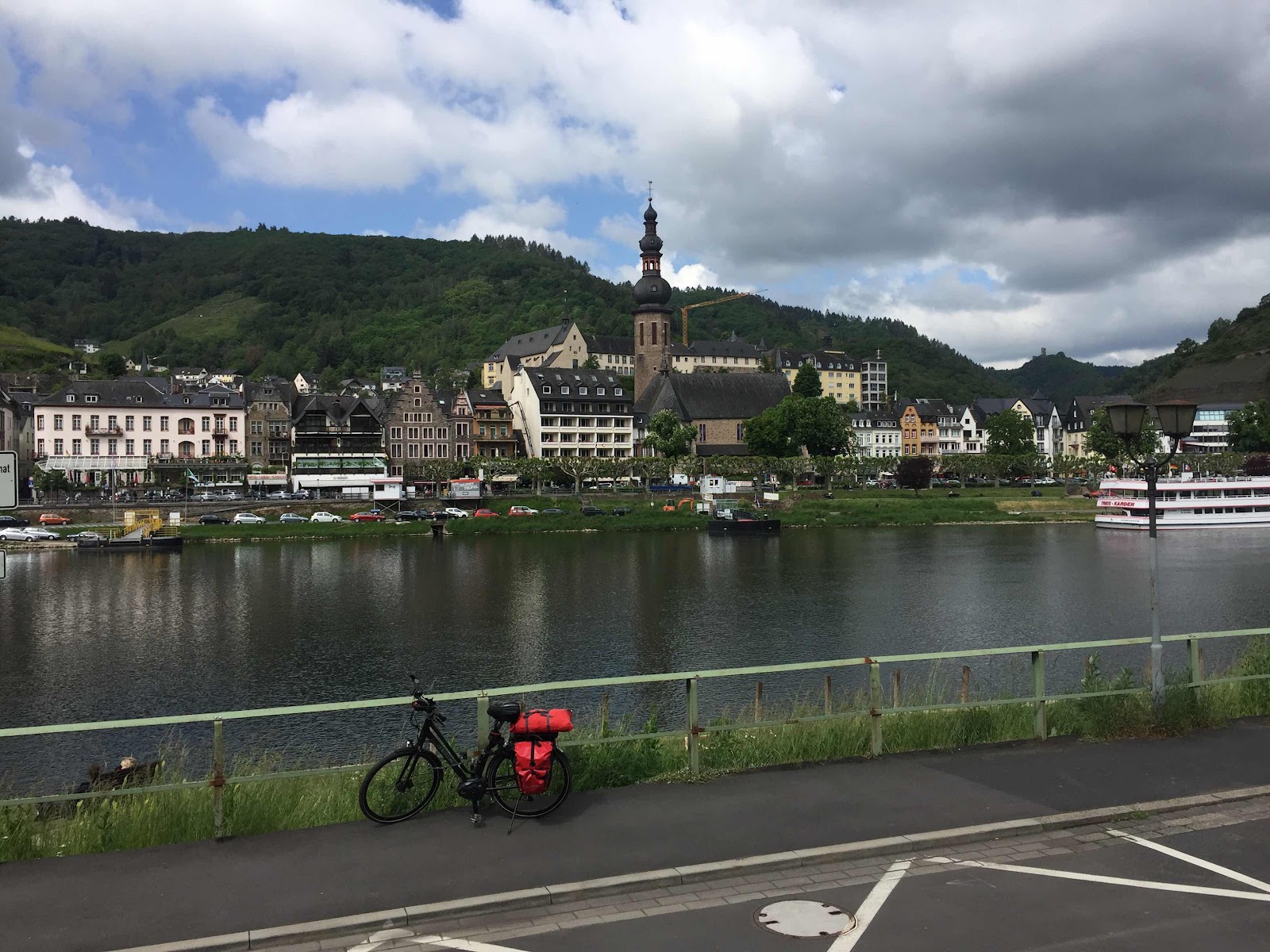 At Cochem we had a proper stop for Kaffee und Kuchen! 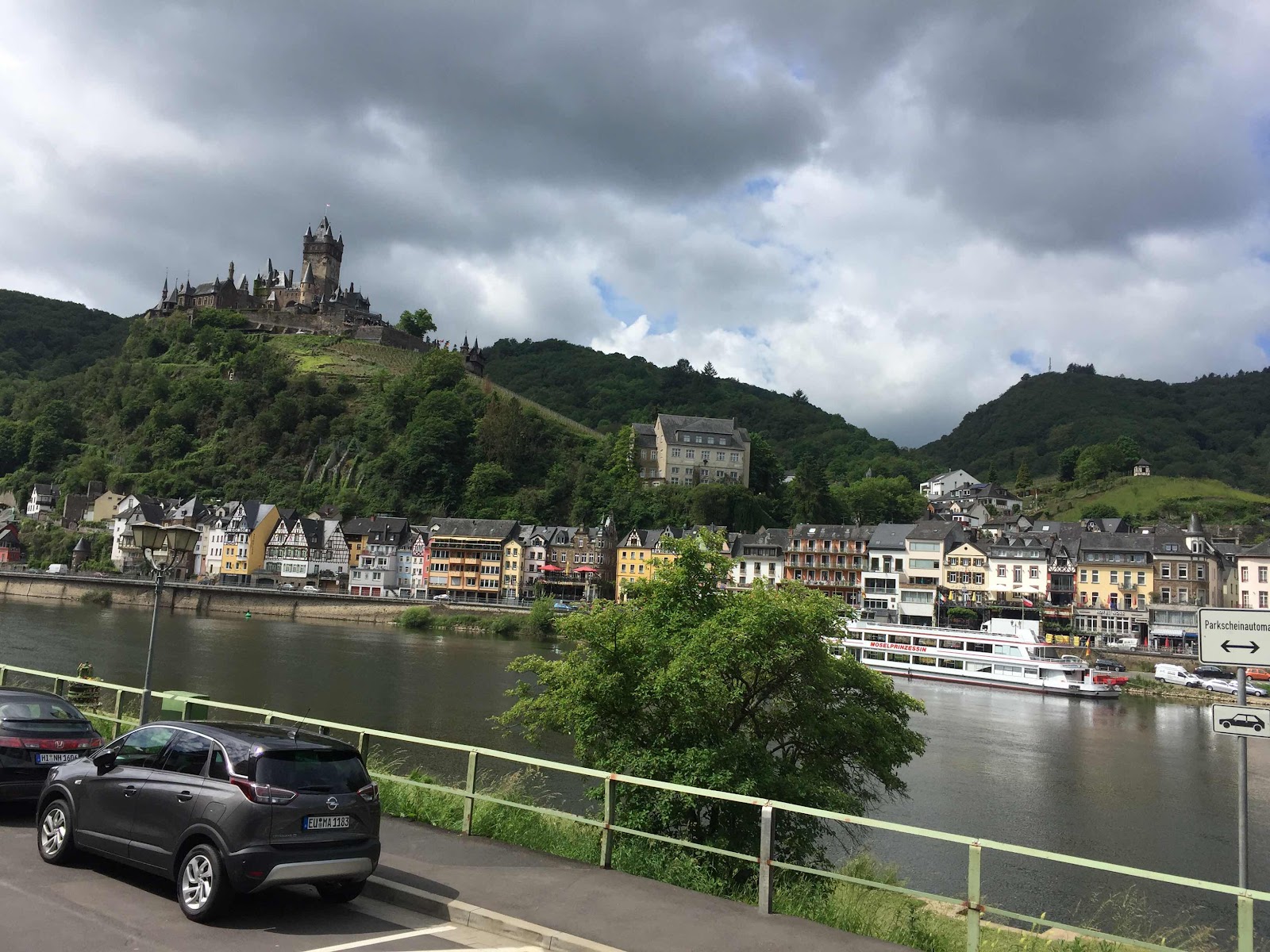 Once we set off again we were soon onto the next bit in a nature reserve. 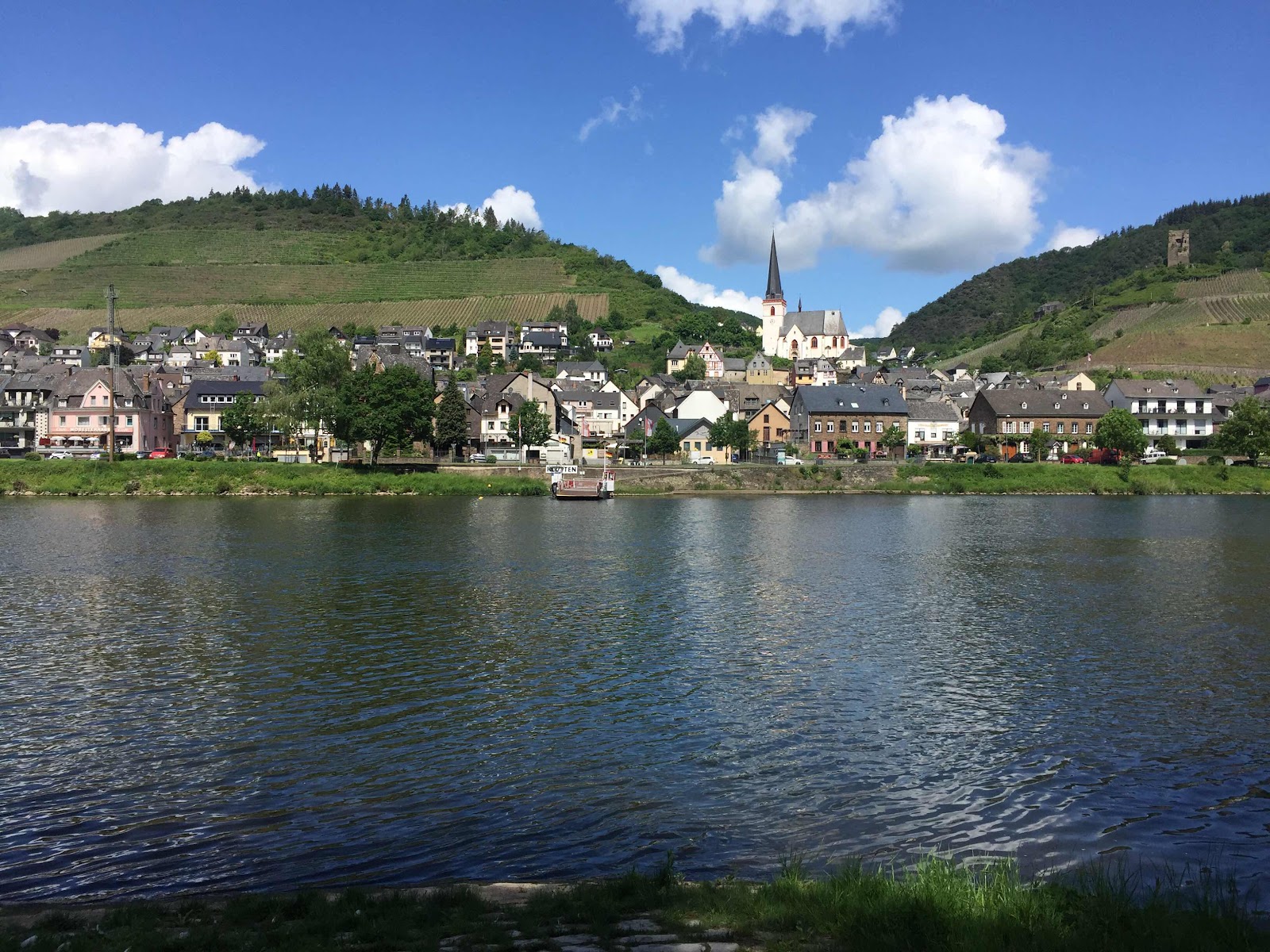 At this point there was a sign indicating that we should take the ferry as a detour as the path ahead was not recommended and rough going!
Although Alan rang the Bell and shouted no ferry came to get us. We waited about 15 mins and then gave up and rode on! The path started ok, but did deteriorate as we went on. 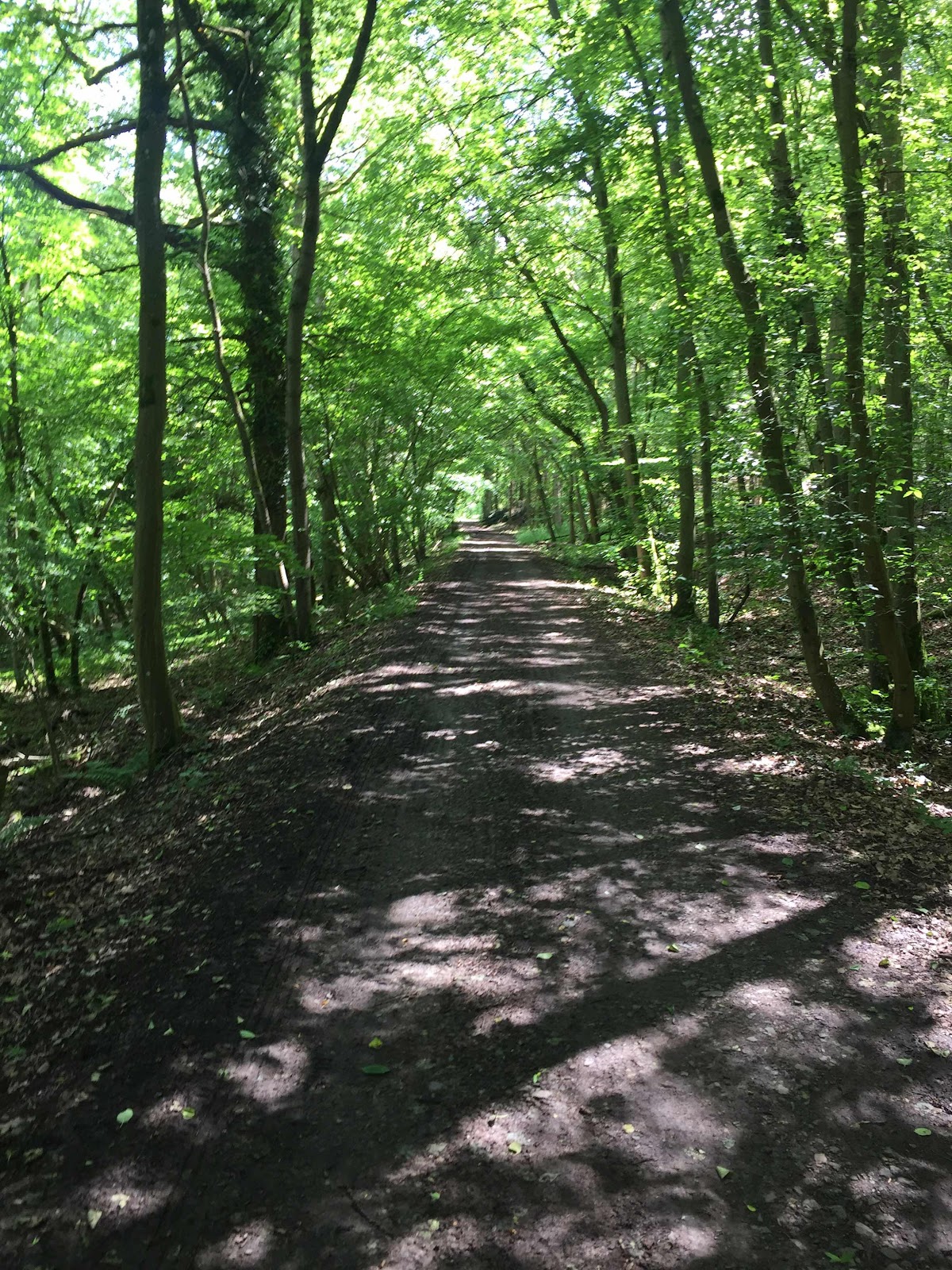 Stages of it were very muddy and so we ploughed on through them slipping and sliding. 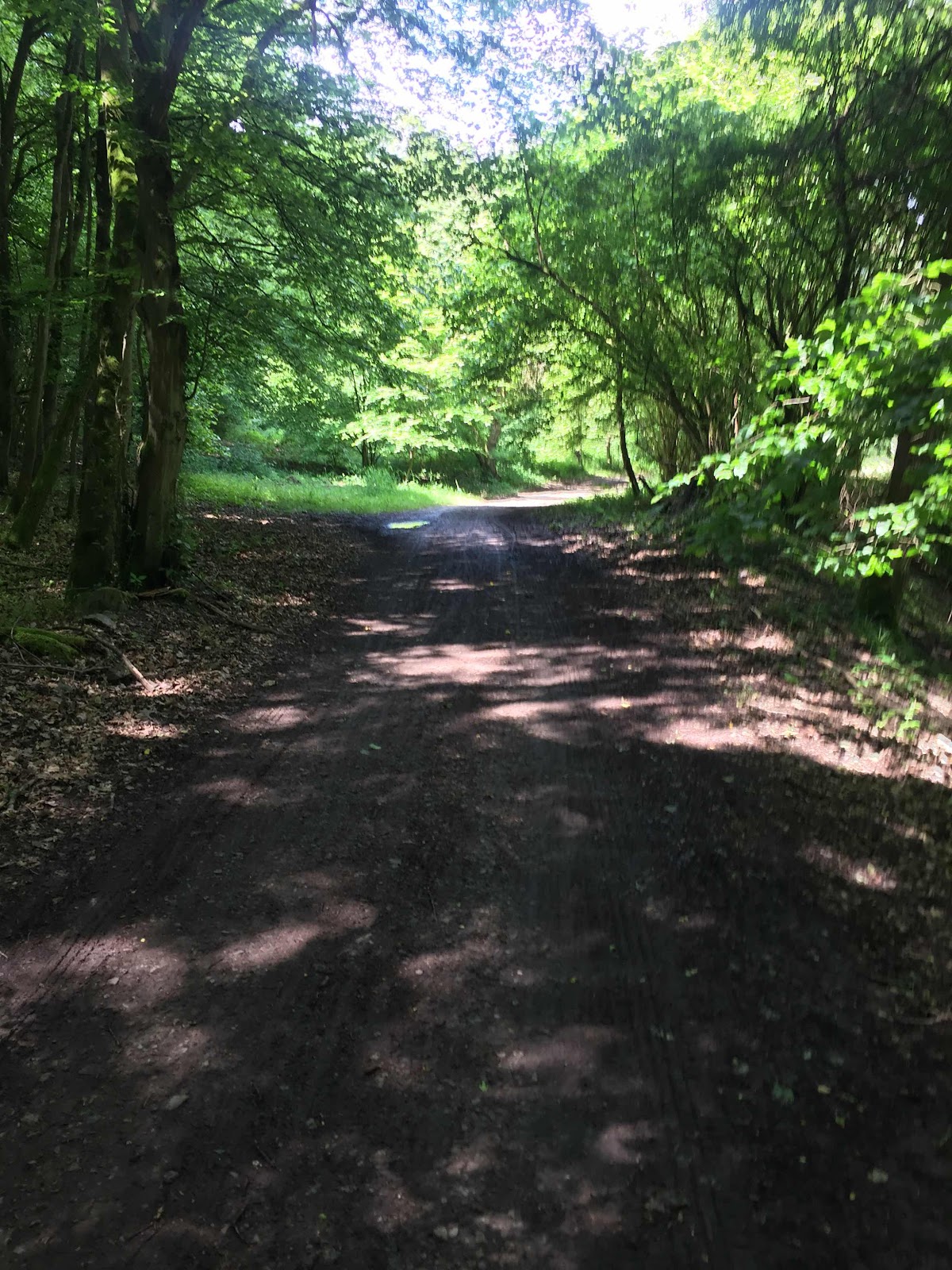 The sun came out though and so at one stop Alan took his rain jacket off and let us out into the fresh air. 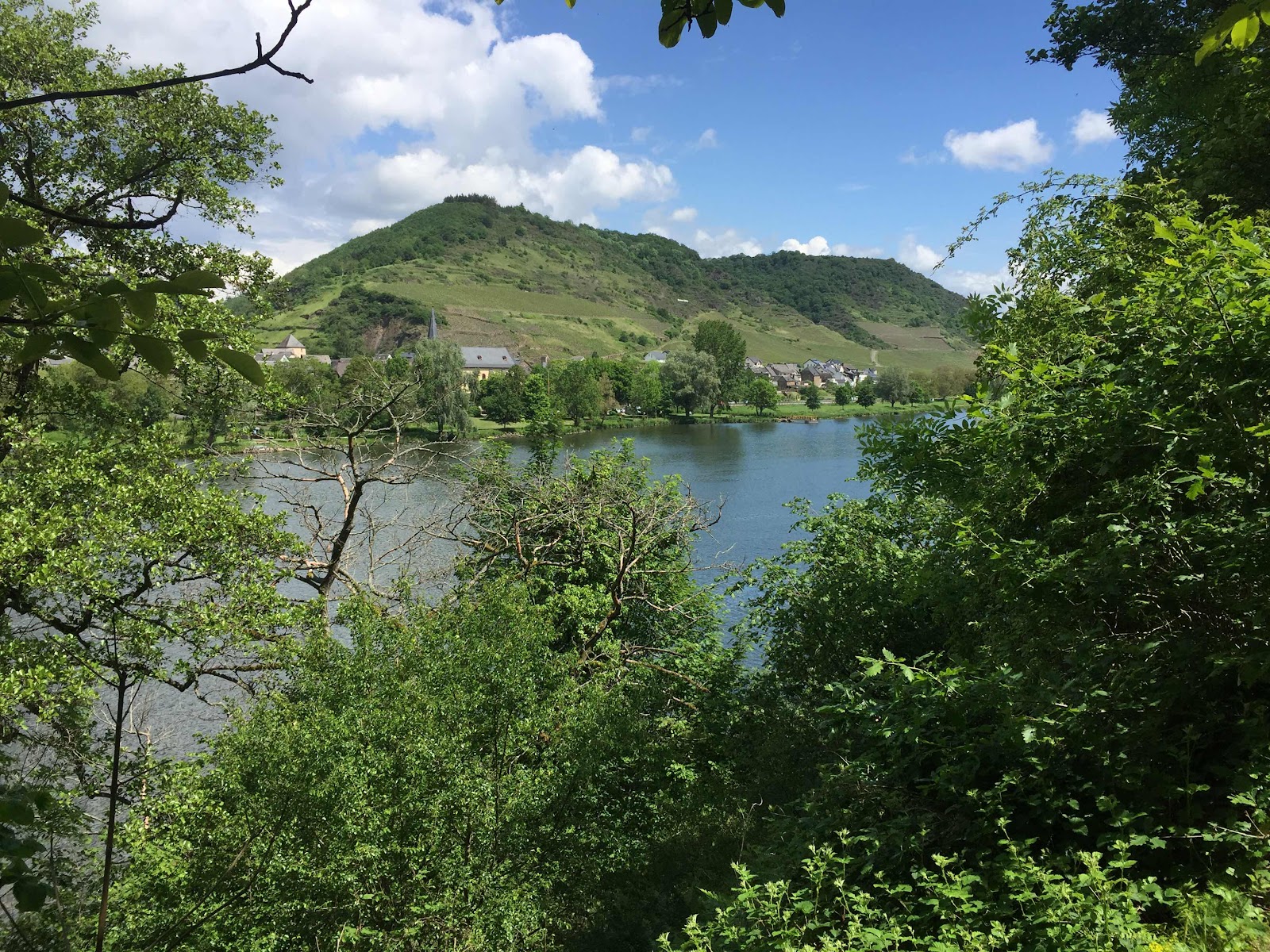 This was an enjoyable adventure. Occasionally we passed some intrepid cyclists going the other way, but generally we had the woods to ourselves! 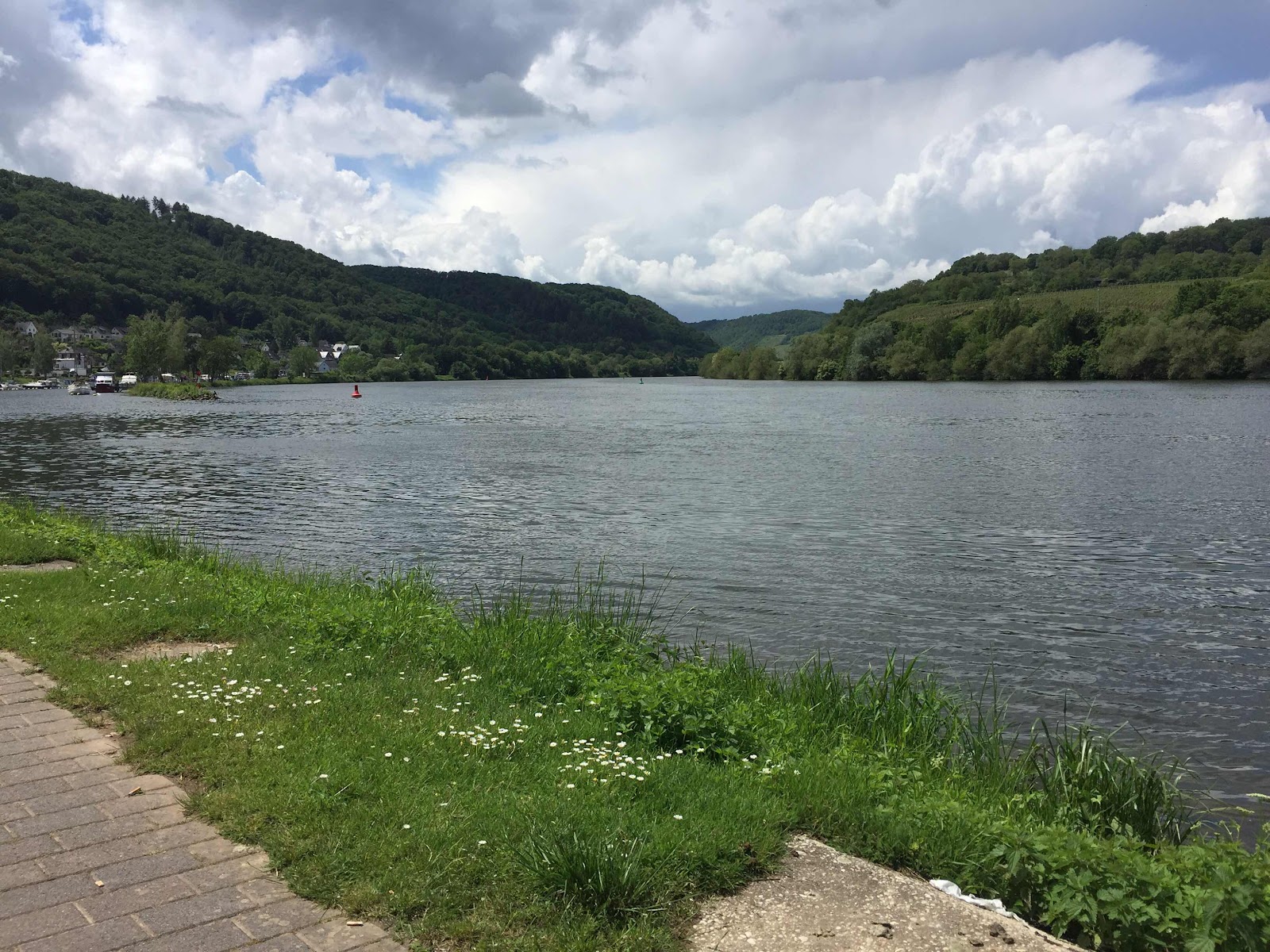 Once out of the woods we came to a village that offered our human a toilet so we stopped and chilled on the river bank for a bit.
Then it was crack on for we had some 30 kms still to go! 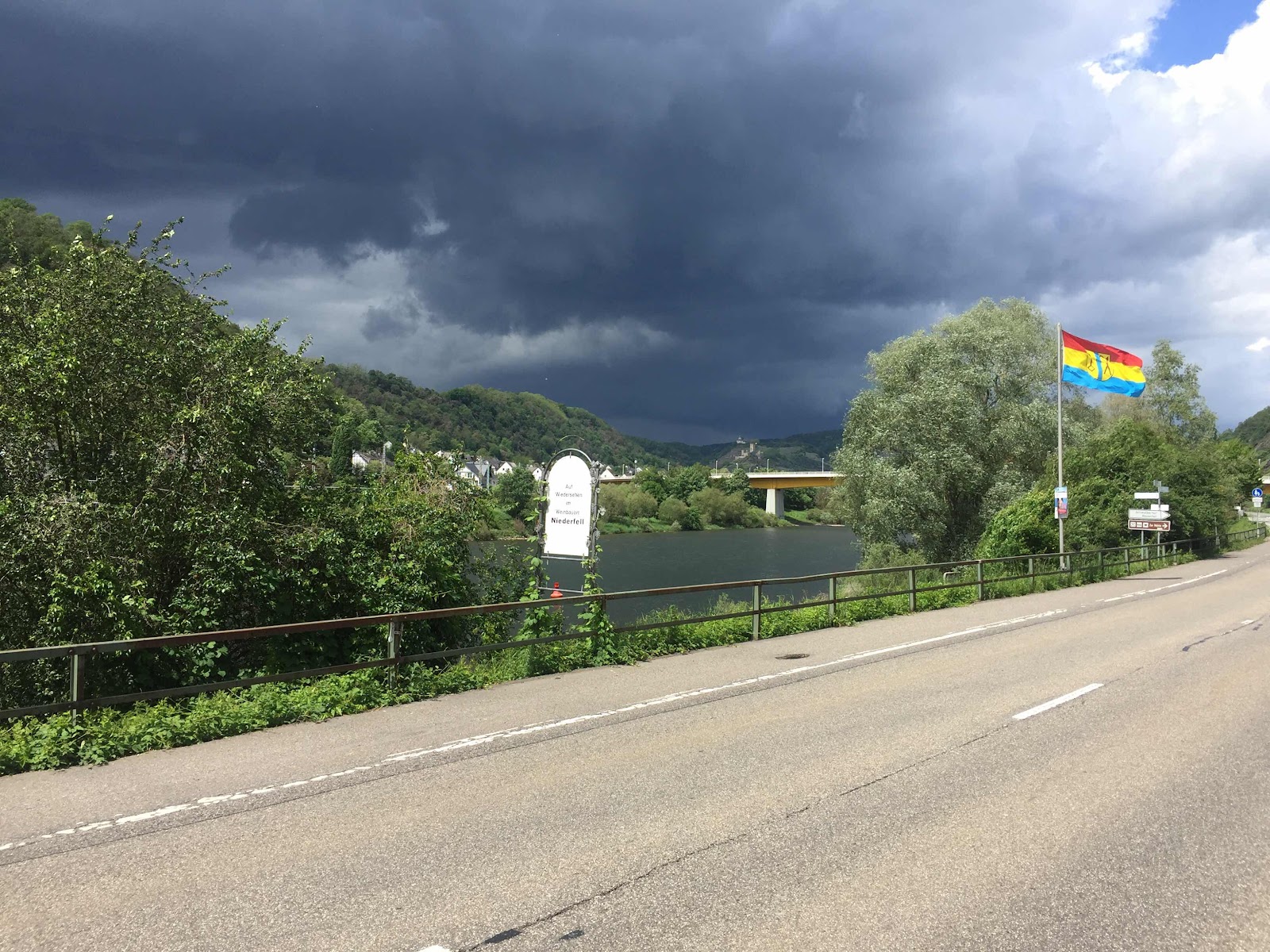 As we passed through Niederfell the thunder started to roll in. When the wind increased we knew we were in trouble. Alan stopped to put his rain jacket and helmet cover on, as well as putting us in the dry. We still had some 20 kms or so to go and it was clear that we would get drenched.
So Alan decided to quickly find accommodation in the village we had passed through, which luckily he did. We turned round and rode hell for leather before the storm reached us. 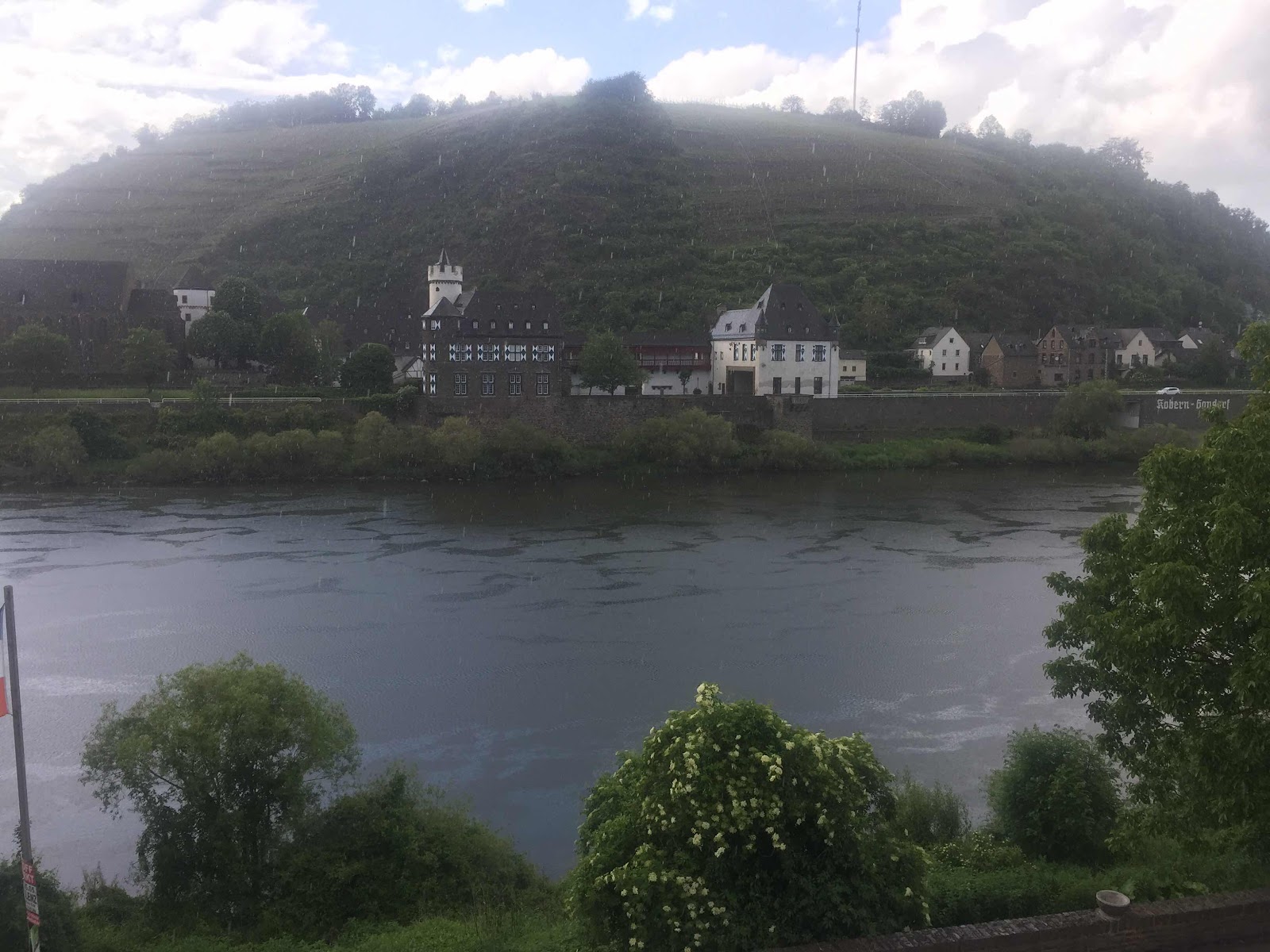 The Thunder passed and followed the River it seemed but the rain stayed as you can see from the photo above which is the view from our window! 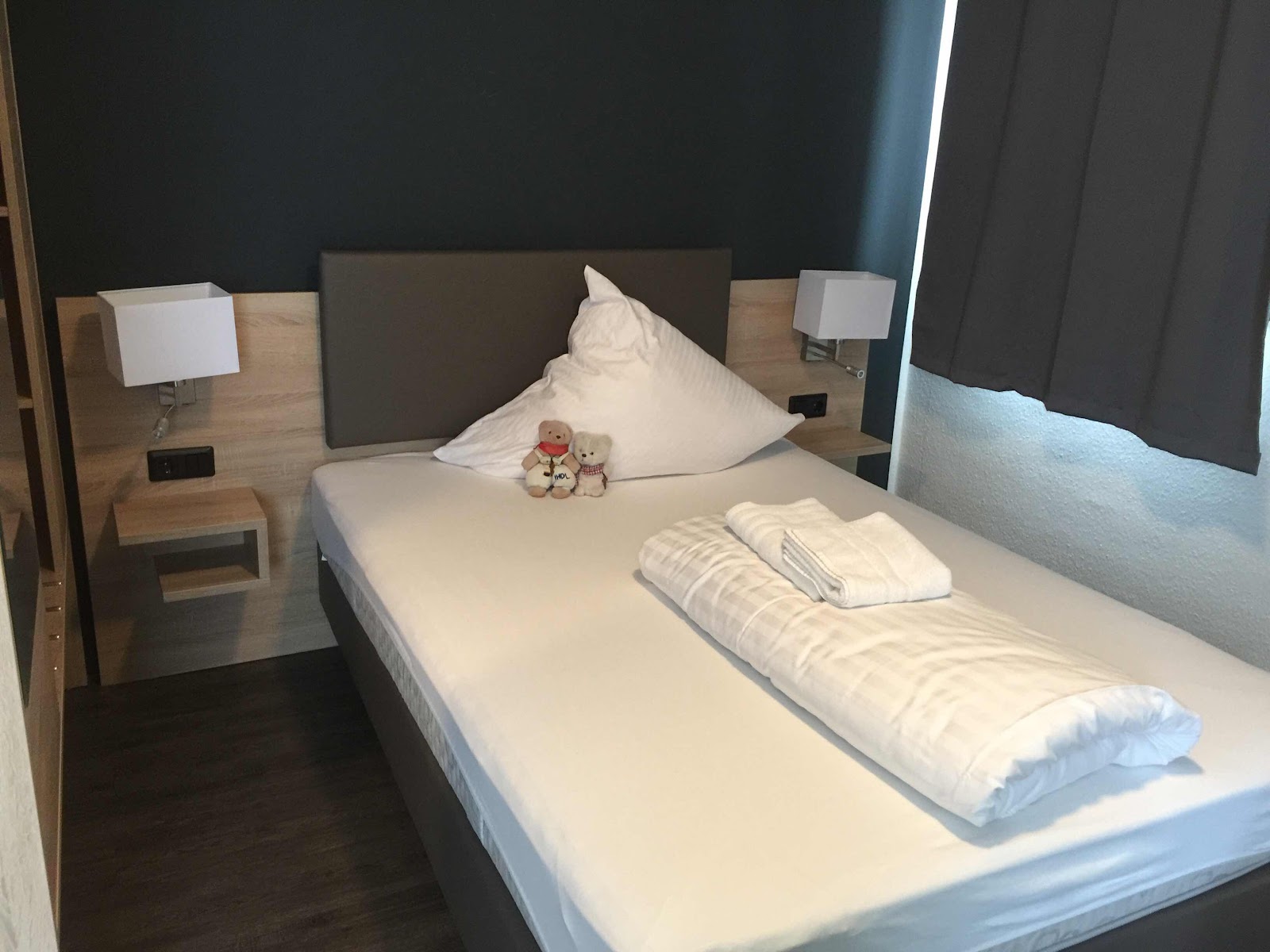 So here we are nice and dry. After a shower and a short nap Alan made a new plan for us.
He intends now to strike across country to reach the River Rhine which we will then follow more or less all the way home!
Posted by Alan Tyson-Carter at 18:03