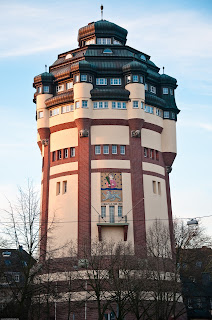 In the shadow of the water tower in Windberg, Mönchengladbach , some 500m from where I live is the Protestant cemetery. 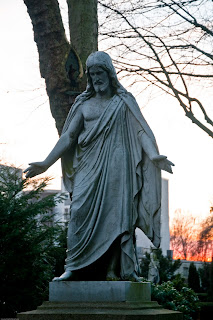 It was here that the burial of Hanna's good neighbour took place on Friday. 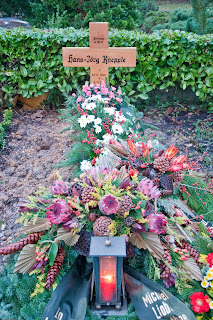 I say burial﻿ because the funeral was a very large affair with a Catholic Mass said in the St Anna  church, Windberg before hand and the committal taking place immediately after in the protestant cemetery. The church was packed and we ended up sitting behind a huge column in this beautiful neo-Gothic church.
My going to two funerals in three days makes me realise that very soon I will belong to the older generation and the next to go, Inshallah! However, as long as there are relatives and friends of my parents still living I don't quite feel part of the older generation just yet. On my father's side there is a brother and his wife, a sister-in-law, my aunt, and at least two cousins of my father still living, as well as his war time comrade. On my mother's side there are no siblings left, but there are a couple of friends from her generation. That said a comrade from my Army service only three years older than me died over the Christmas holiday period as well. This all goes to show that the grim reaper is closer than we imagine.
The moral of the tale? Enjoy and live each day as if it were your last.
﻿
Posted by Alan Tyson-Carter at 01:02