A Mini Adventure in September

I don't know about you, but we Bears are getting fed up of this pandemic and the reduced freedom to travel at will. We were fortunate enough to have a super summer holiday on the island of Borkum in July with Vincent and the rest of our Worms family, but that was it!

We badgered our BBF to plan something to get us out of the house for at least a couple of days. Now he has been thinking a lot about cycle adventures he could have. He says he fancies cycling down the Rhine and Elbe Rivers. Staying in B&Bs each night makes the trip expensive and so he thought that camping along the way was the way to go. Staying in B&Bs when the weather is bad. Part of his problem though, is that he is a gadget maniac, loves and uses them all, (iWatch; iPhone; iPad; iPod; hearing aid)but they need power at the end of each day. In a B&B charging is not a problem, but on a campsite? We have heard stories where campers charge phones and leave them in the toilets, not something he was willing to do. We have all the kit so we needed to get out there and see how it goes. To this end our BBF planned a trip of three or four days staying at three campsites marked on a cycle map. 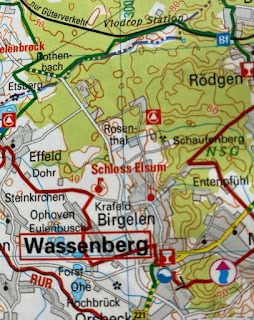 Here at the top of the picture you can see our first intended destination. Each leg of this adventure was to be around 50kms. 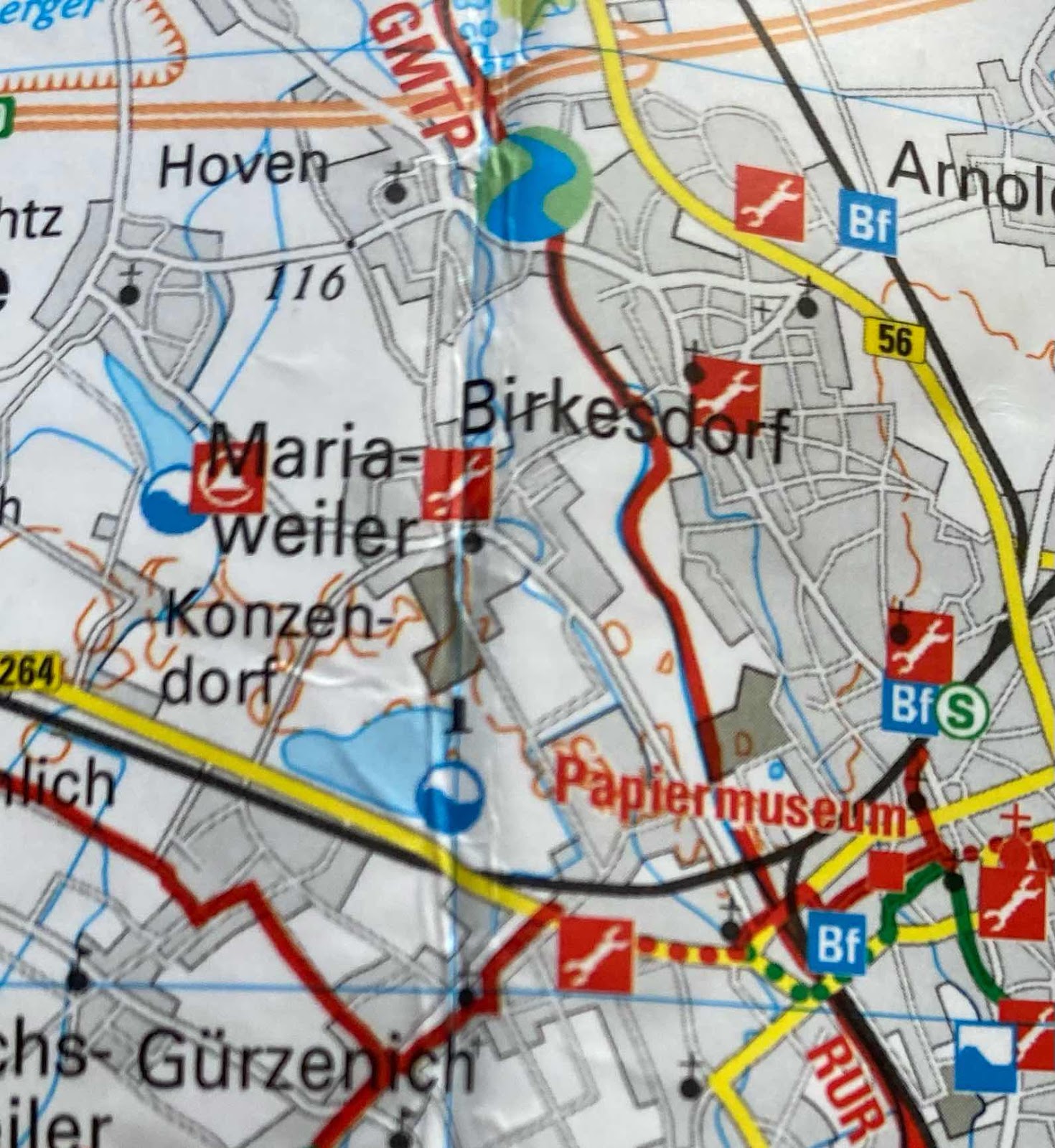 Our second destination by a lake near Düren. He thought we should stay here two nights as there was a nice interesting circuit of just over 40kms we could take on the second day. 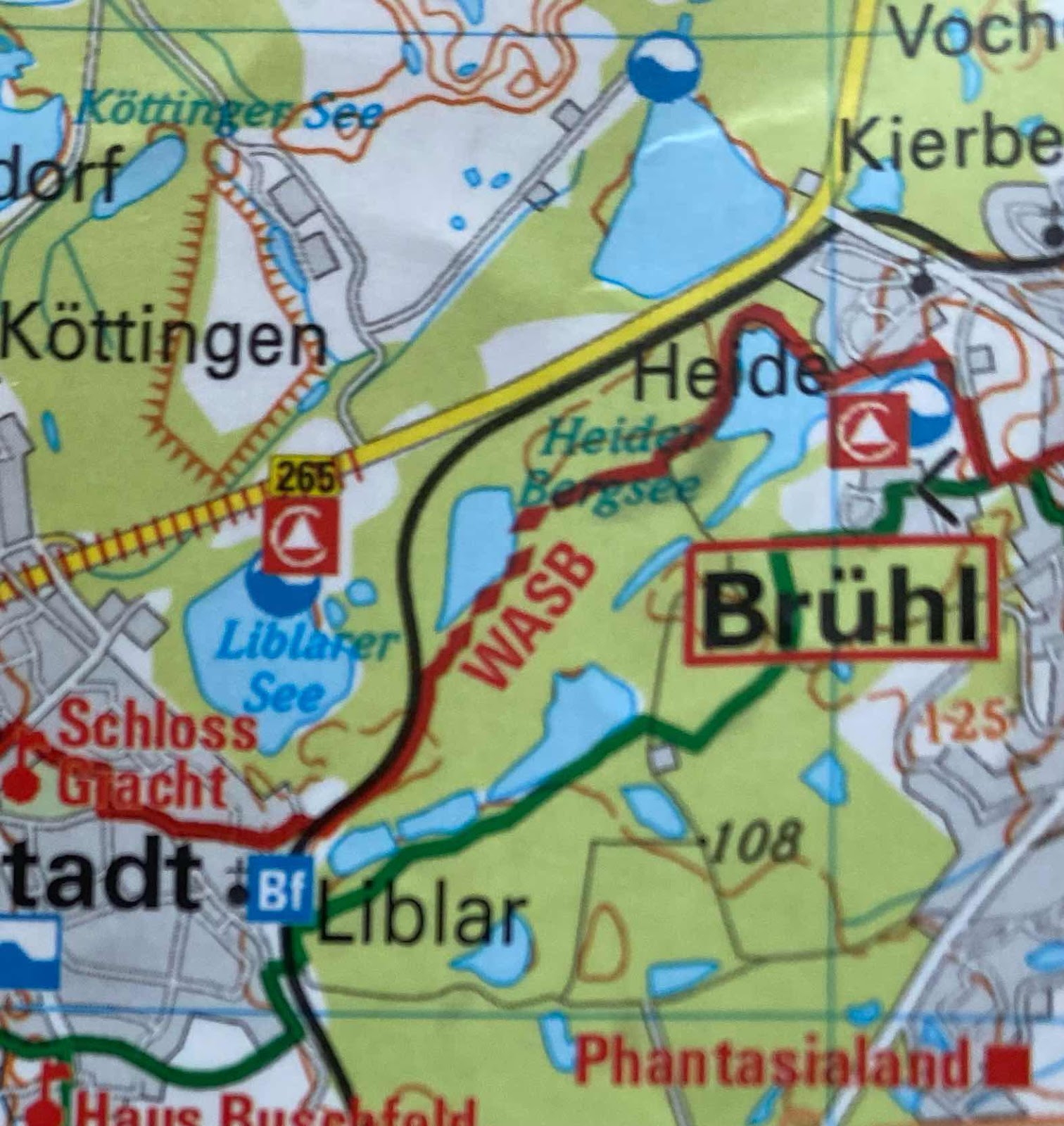 This the third site chosen off the map was to be the last before returning home! 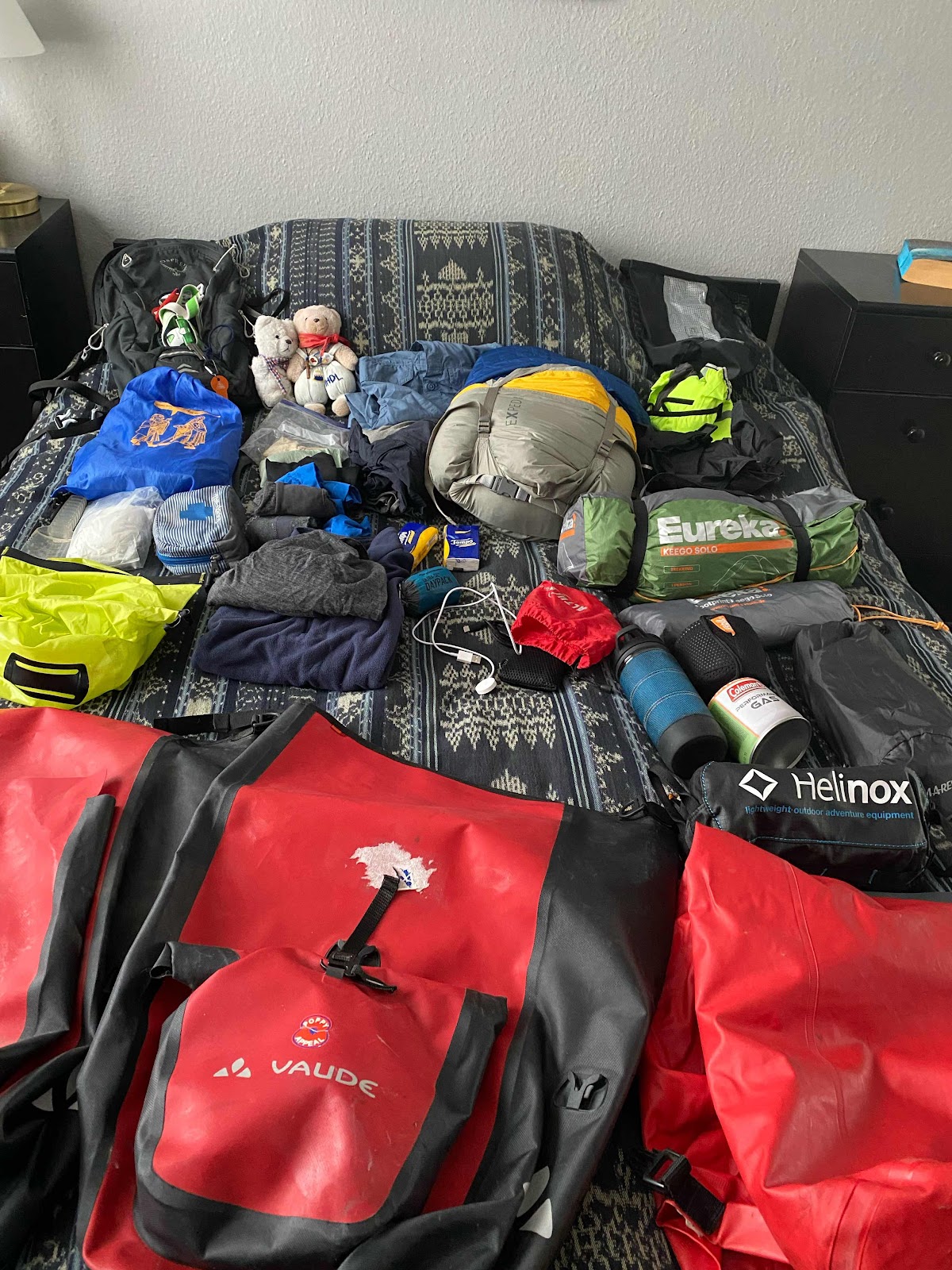 We had a trial pack and so now all we needed was good weather. On the Friday 3 September the ridge of high pressure arrived so we could set off after lunch, as the first destination was not so far away. However, Alan had ordered another gadget a mini air pump to blow up his mattress and to suck the air out when packing it up. Alexa informed us at breakfast that it was to be delivered that day so we waited and waited. 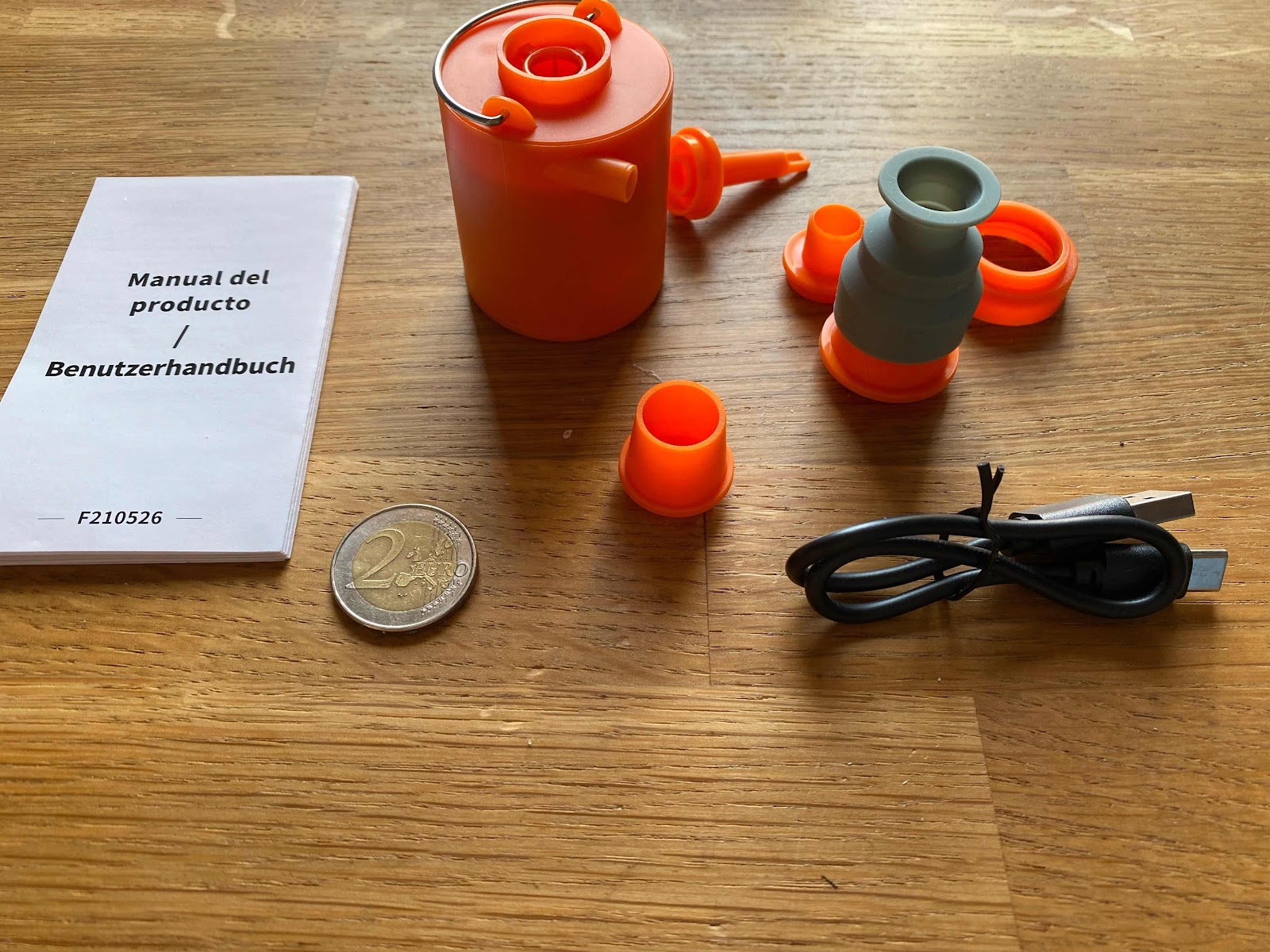 There are generally three delivery times for Amazon depending we believe on which logistic depot the item is dispatched from. 11:00; 15:00 or 17:00 hrs. Pot luck decides when. It arrived at 15:00 hrs, but needed charging up, so we left it behind and set off on our adventure without it. 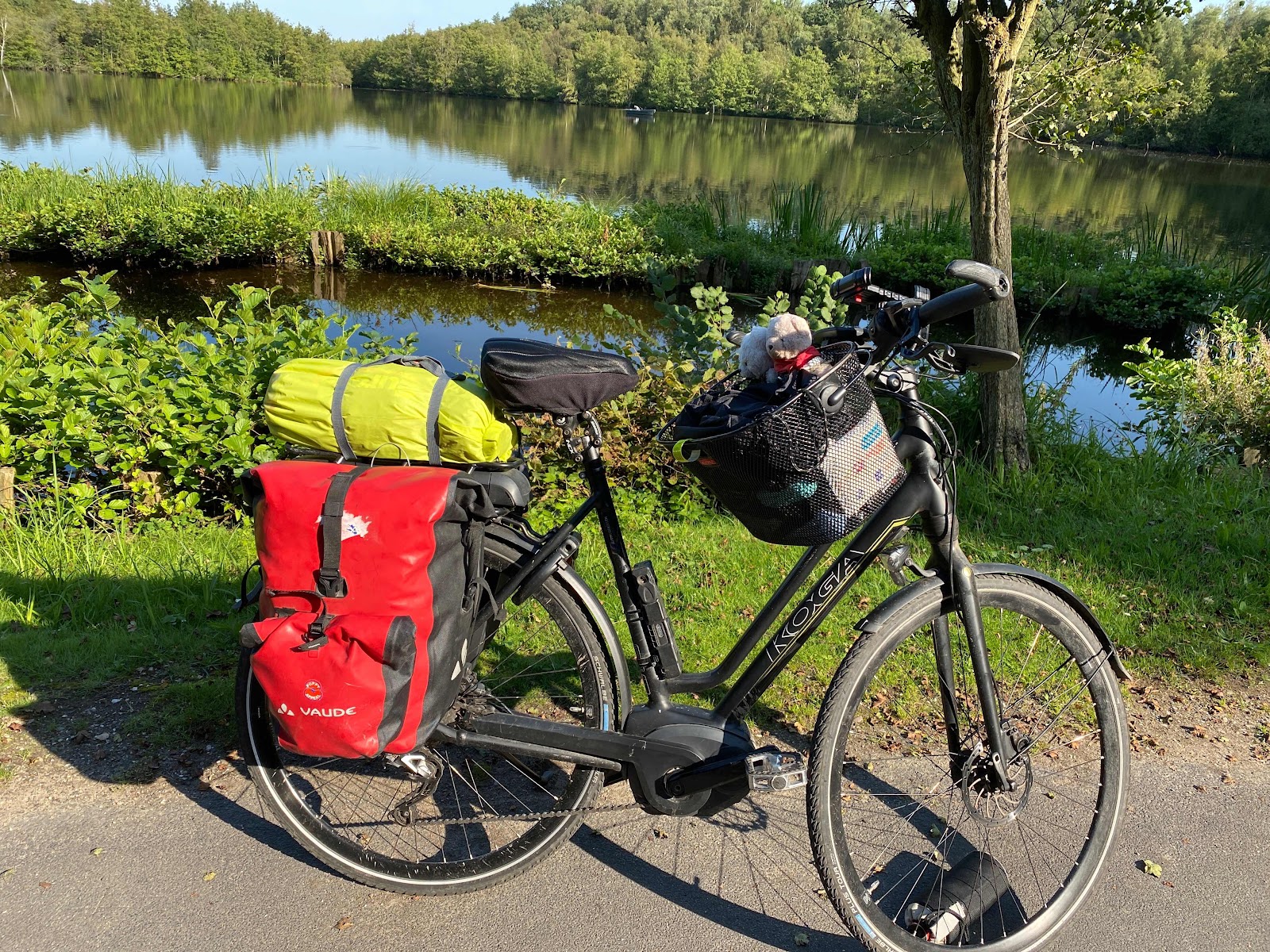 We all throughly enjoyed being on the road again out in the wonderful fresh air and sunshine.

Now we should mention that our BBF decided at the outset NOT to book or phone the campsites. He felt that this would tend to be the way one travelled down the Rhine. Making a booking meant one was forced to go the distance to get there and did not allow for the spontaneity of going off the beaten track.

The ride to our first campsite in Rosendahl went well and without any problems. The campsite was easily found, though initially the entrance was not and we ended up cycling right round it. 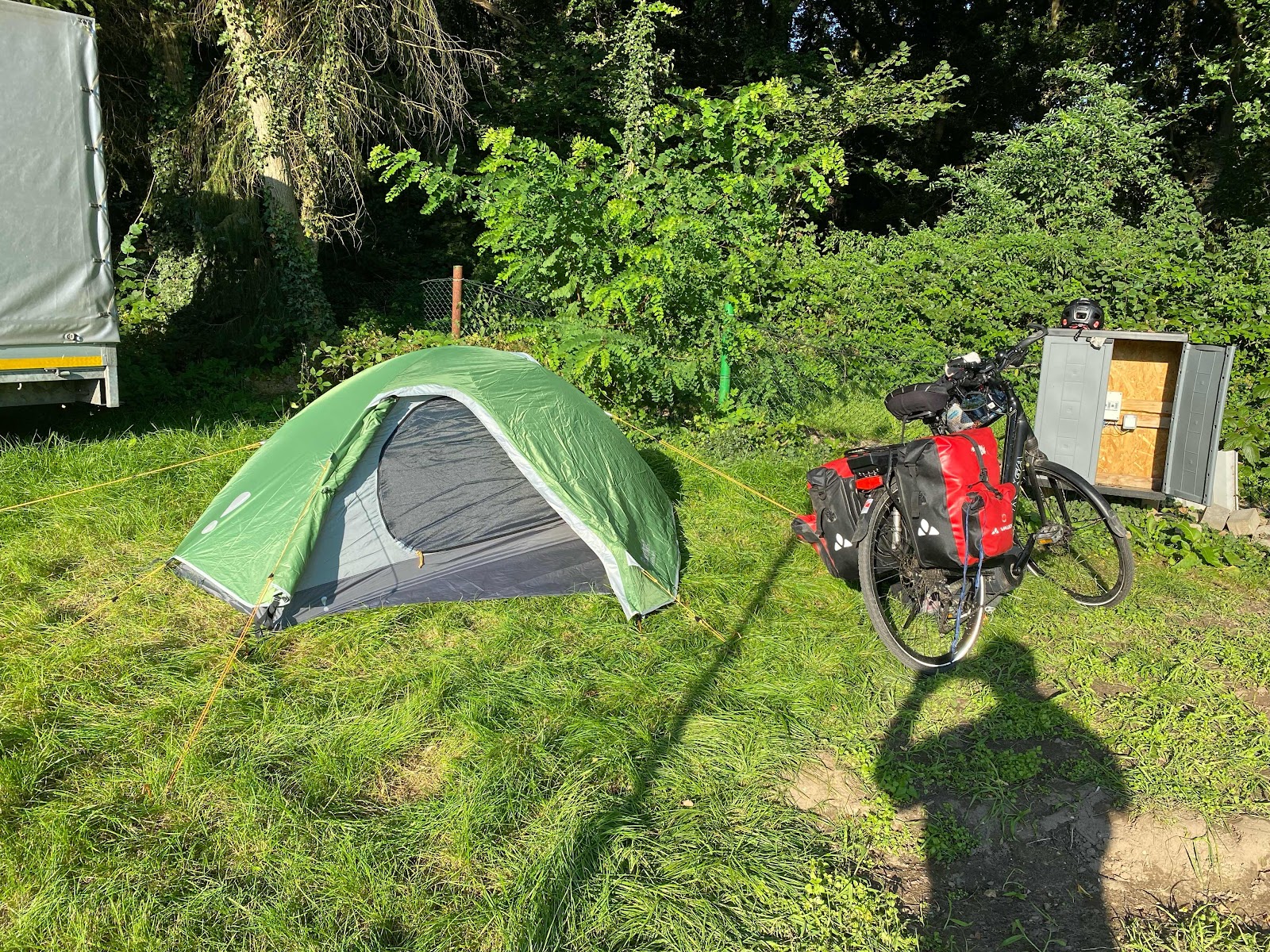 The campsite is hidden in a wood and consists mainly of caravans parked permanently. It had a bit of run down feel to it, but we were offered a site with access to power and close enough to the ablutions to please our BBF. In no time at all we had erected our tent and made ourselves at home. 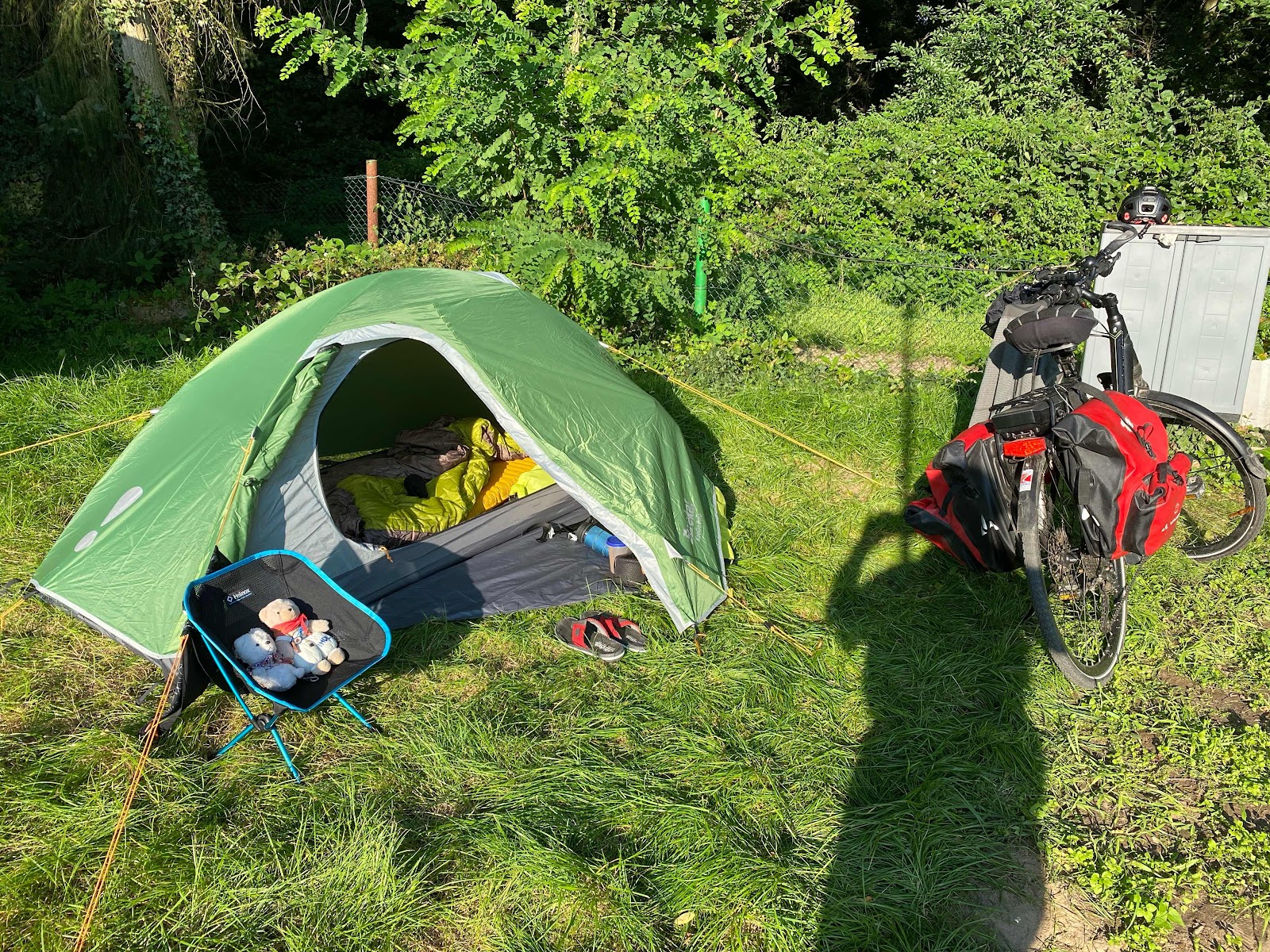 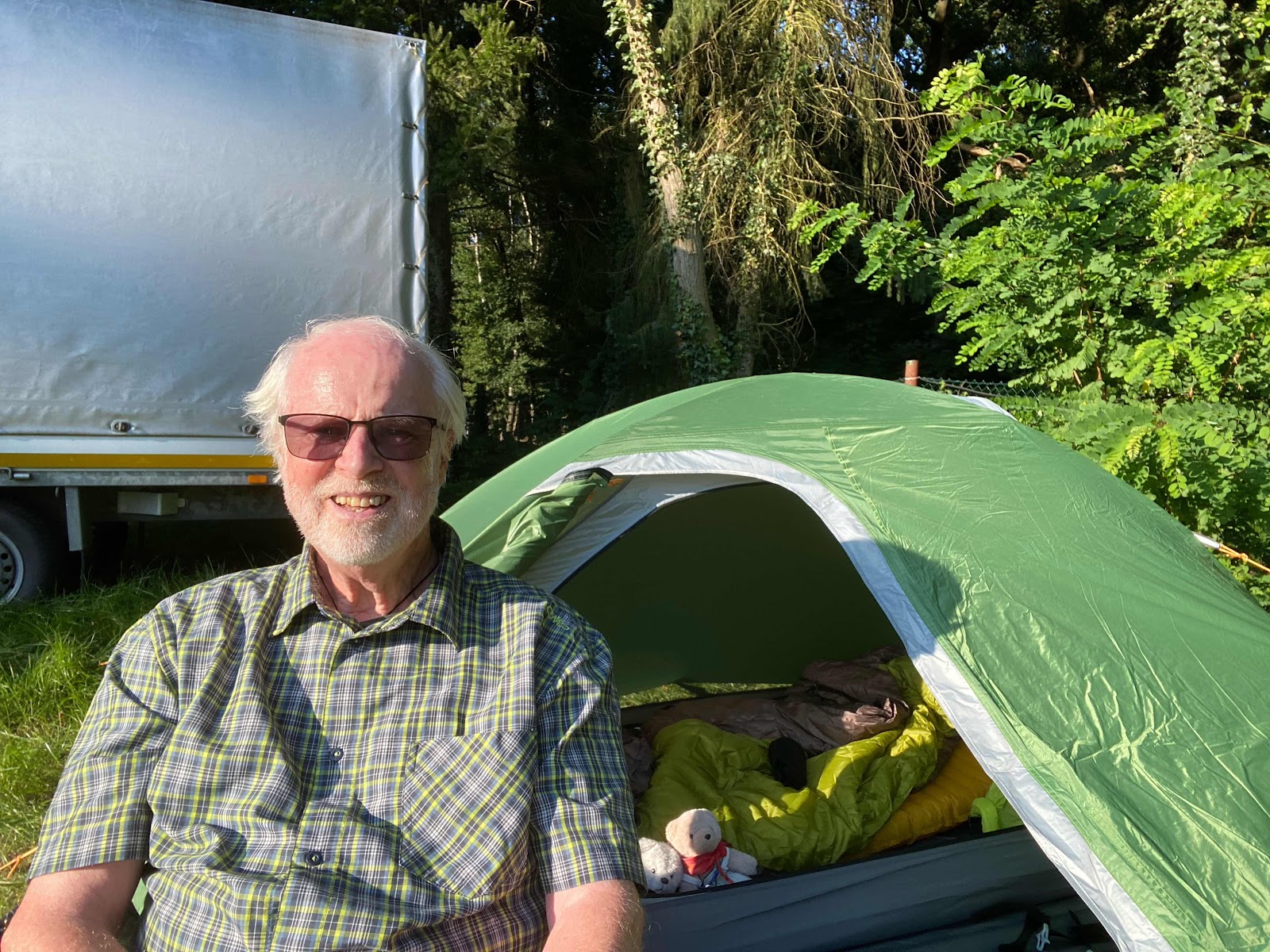 Meals was now the next problem as the campsite had none and Alan did not intend on cooking meals though he did have the makings of coffee for the mornings. So once we had set up, checked in and had our isotonic drink which the campsite could provide, Alan set off alone, leaving us Bears to guard our tent.
He told us later that he had to ride into Wassenberg, where there seemed to be some sort of festival going on as the place was crowded and all the restaurants  were full. Market stalls were set up and live music was being played. He eventually found a seat in an Italian Pizza Parlour and had lasagne with a glass of Lambrusco. By the time it came to return it was dark and he had not programmed his iPhone to navigate back to us! Consequently he missed the way and got disorientated! (He is never lost! He says!) But return he did.
The night proved to be unsettling and a little noisy. Campers talking loudly and teenagers wandering constantly around was one of the main causes the other was that the Lasagne and Lambrusco lay heavily in Alan's stomach. Cramp, despite all the magnesium Alan takes, was the other reason. Getting in and out of the sleeping bag was not as easy as it used to be he found. Old bones don't fold up as easy as they used to! But sleep we did, even if fitfully, finally waking at 07:30 hrs. 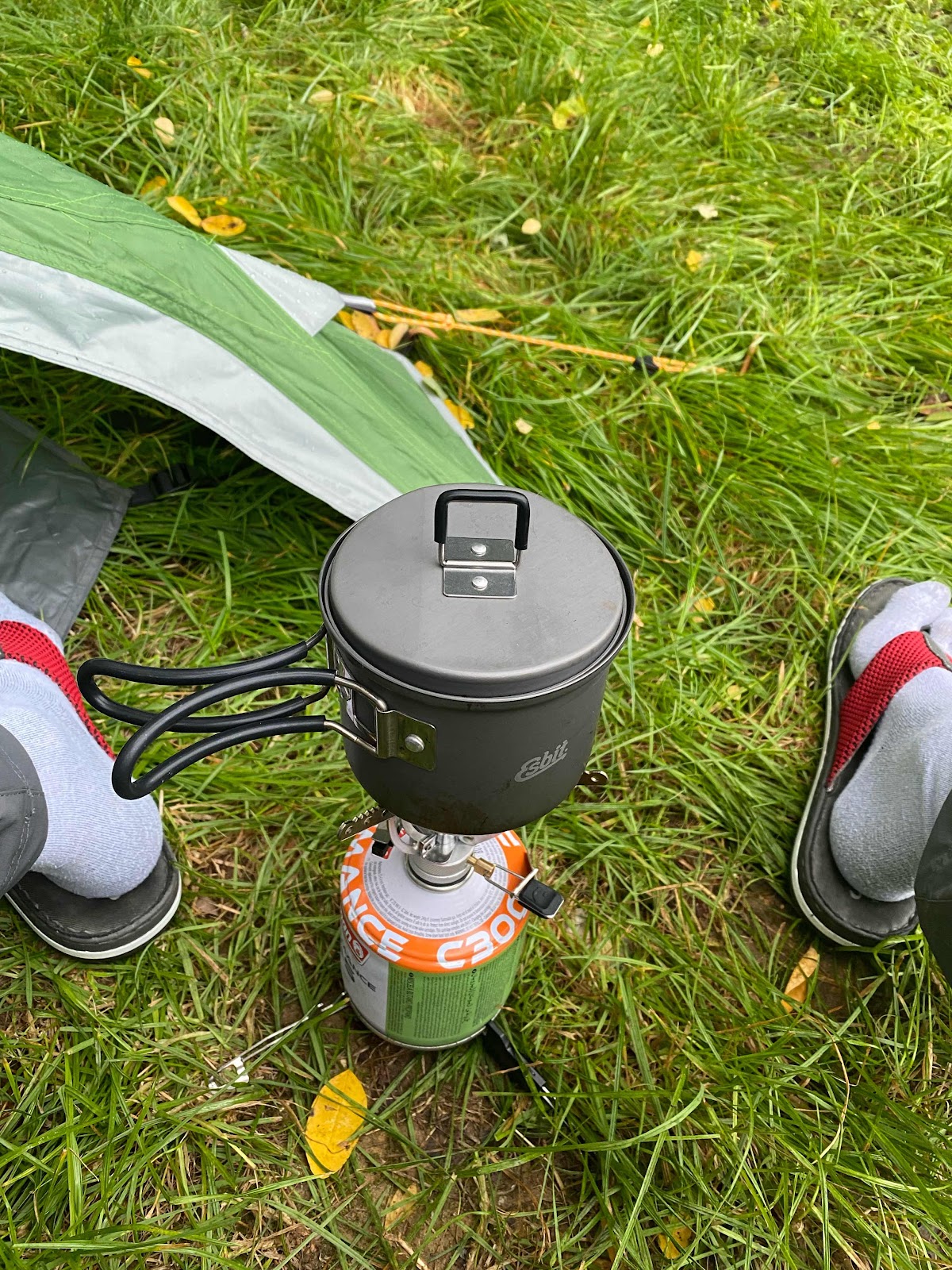 The morning was damp and chilly, though we had all been warm as toast in the night. The inside of the tent was wet with condensation, whereas the outside was dry, though the grass and bike were wet from the morning dew. Coffee was called for after our BBF had had his wash and brush up. He had the makings of real coffee which was prepared in a French Press Mug. 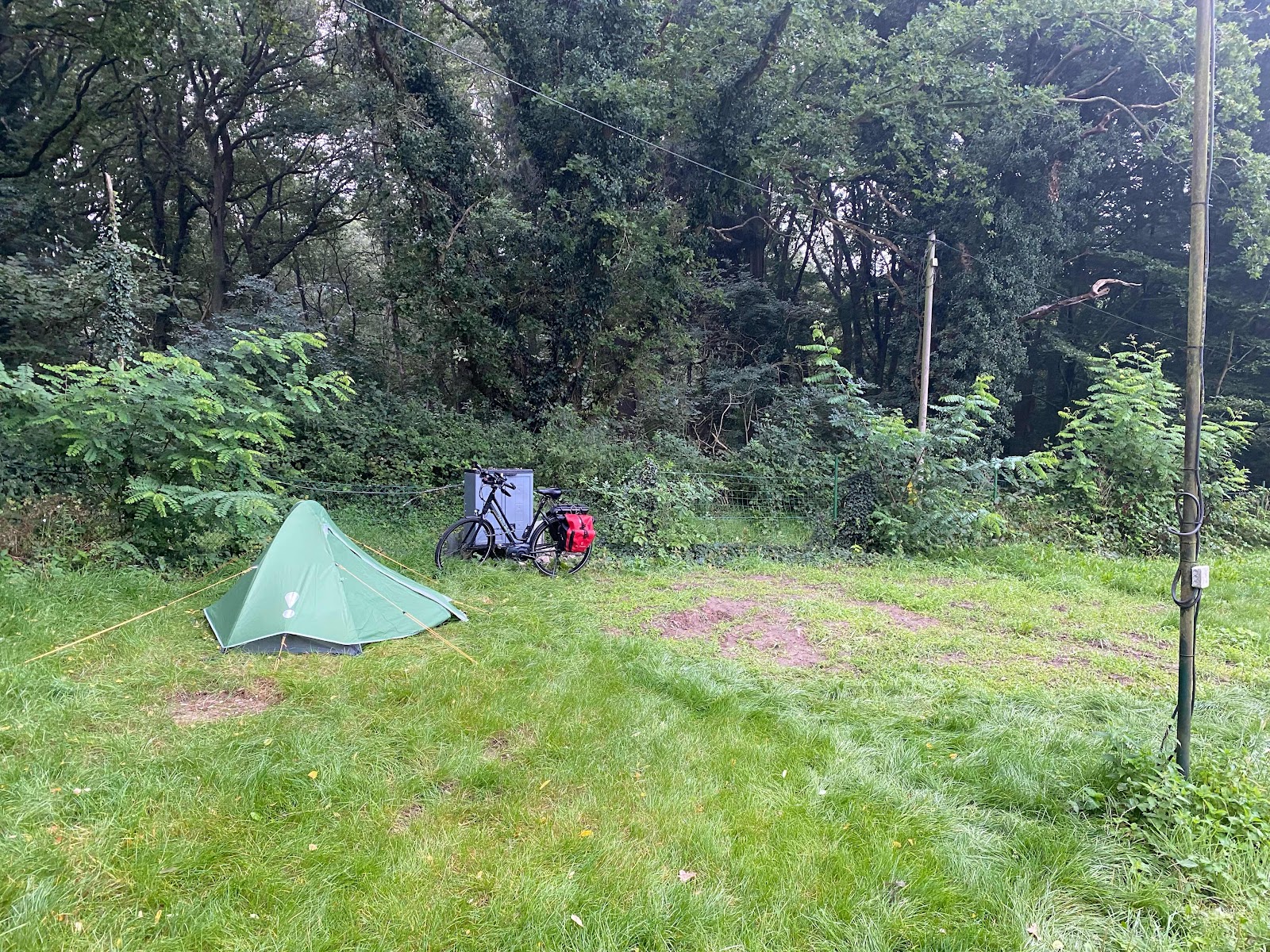 Alan wiped the condensation off the inside of the tent with a tea towel, so it was dry when we packed it up. The Bike Power pack had been plugged in and charged during the night,. The iPhone and iWatch had been charged up using an extra power pack and now this was plugged in to charge up again. Sadly this takes some time and it was only charged up to 82% by the time we set off around 09:00 hrs. 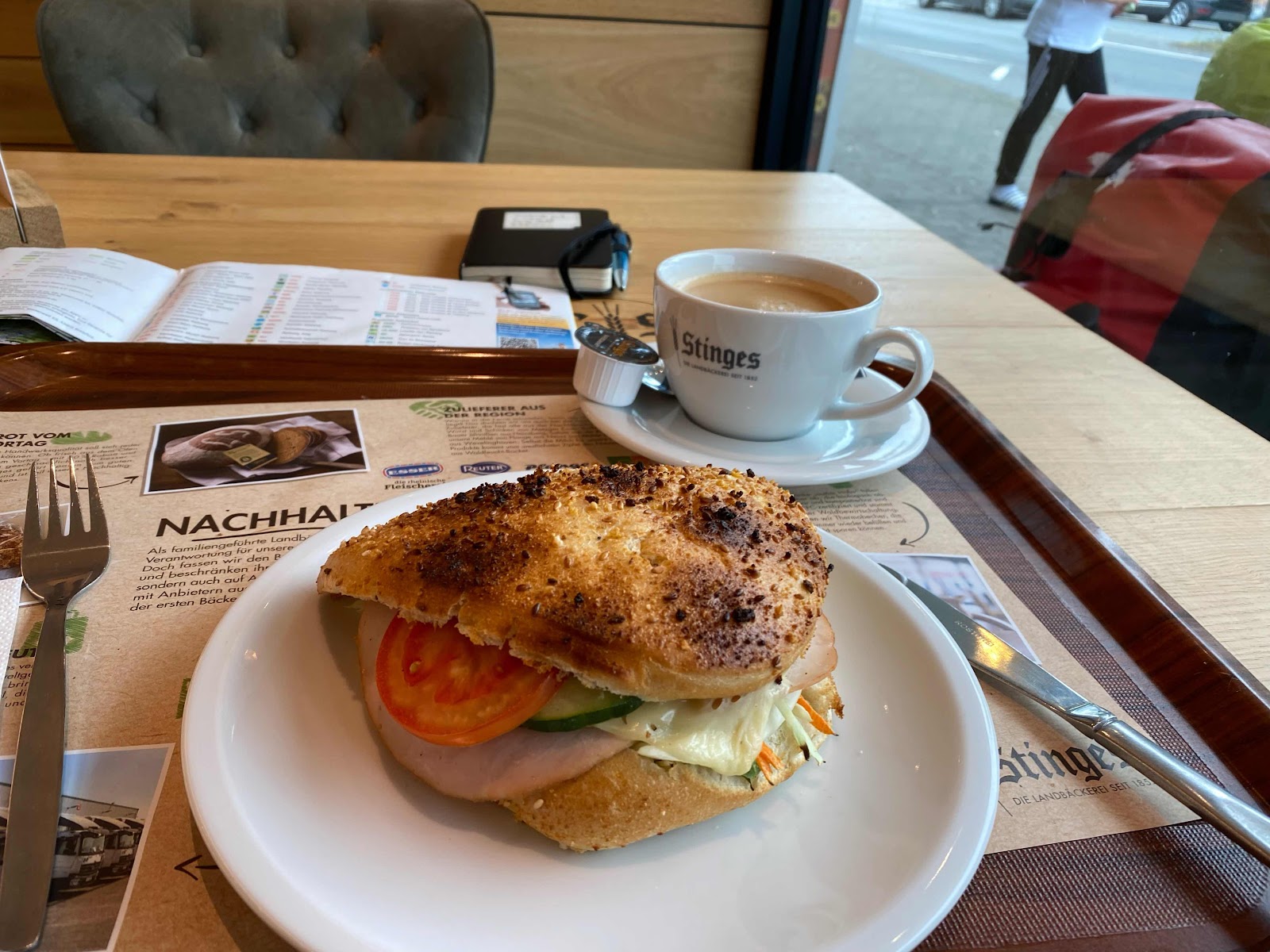 Along the route we found a Baker's Cafe where we were able to have breakfast. Our route now took us along the Rur River valley. Not to be confused with the Ruhr Valley which is a larger and different river. 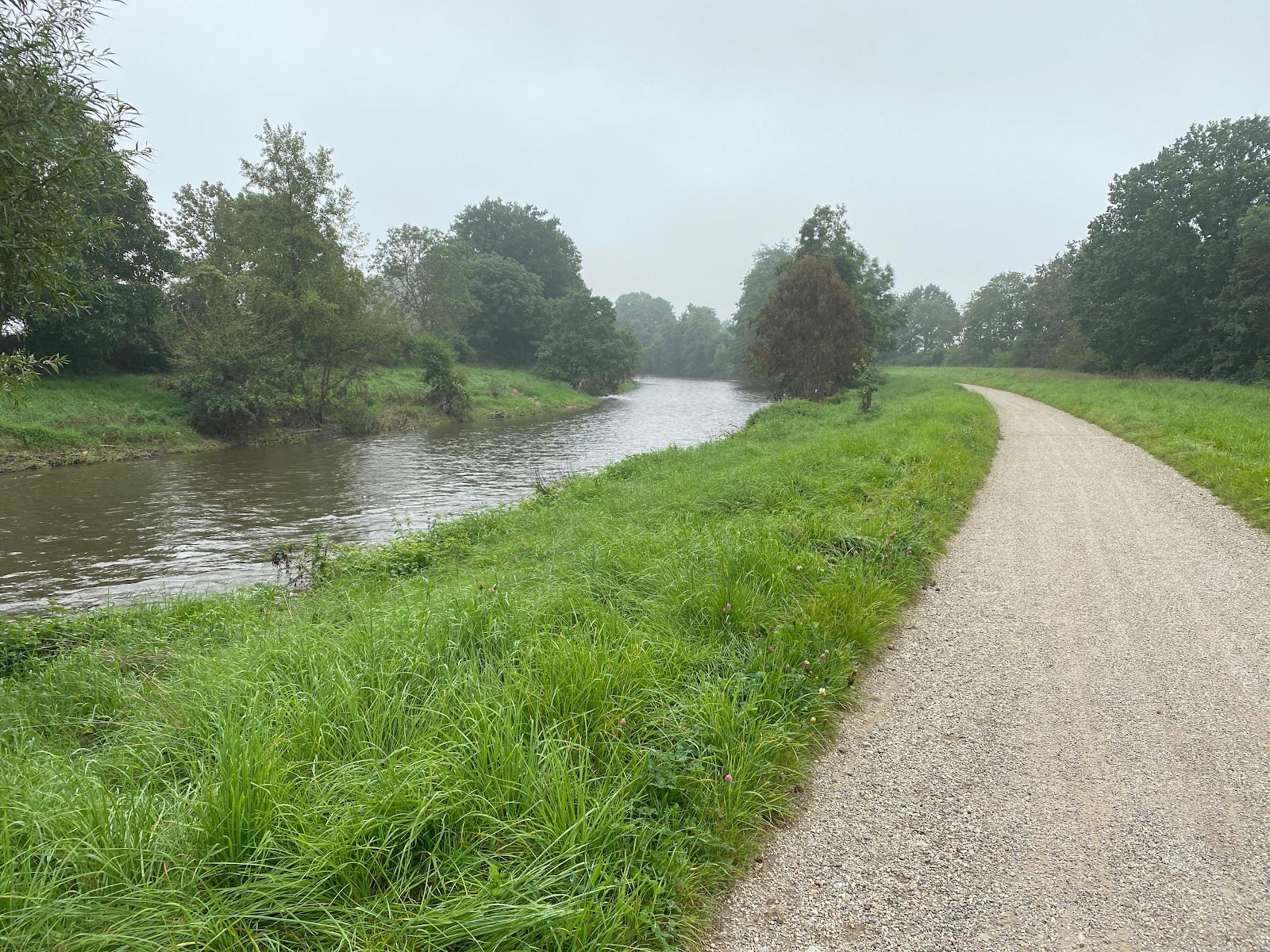 There was a fair bit of water in the river and at various places we came to rapids and overfalls, which impressed us. 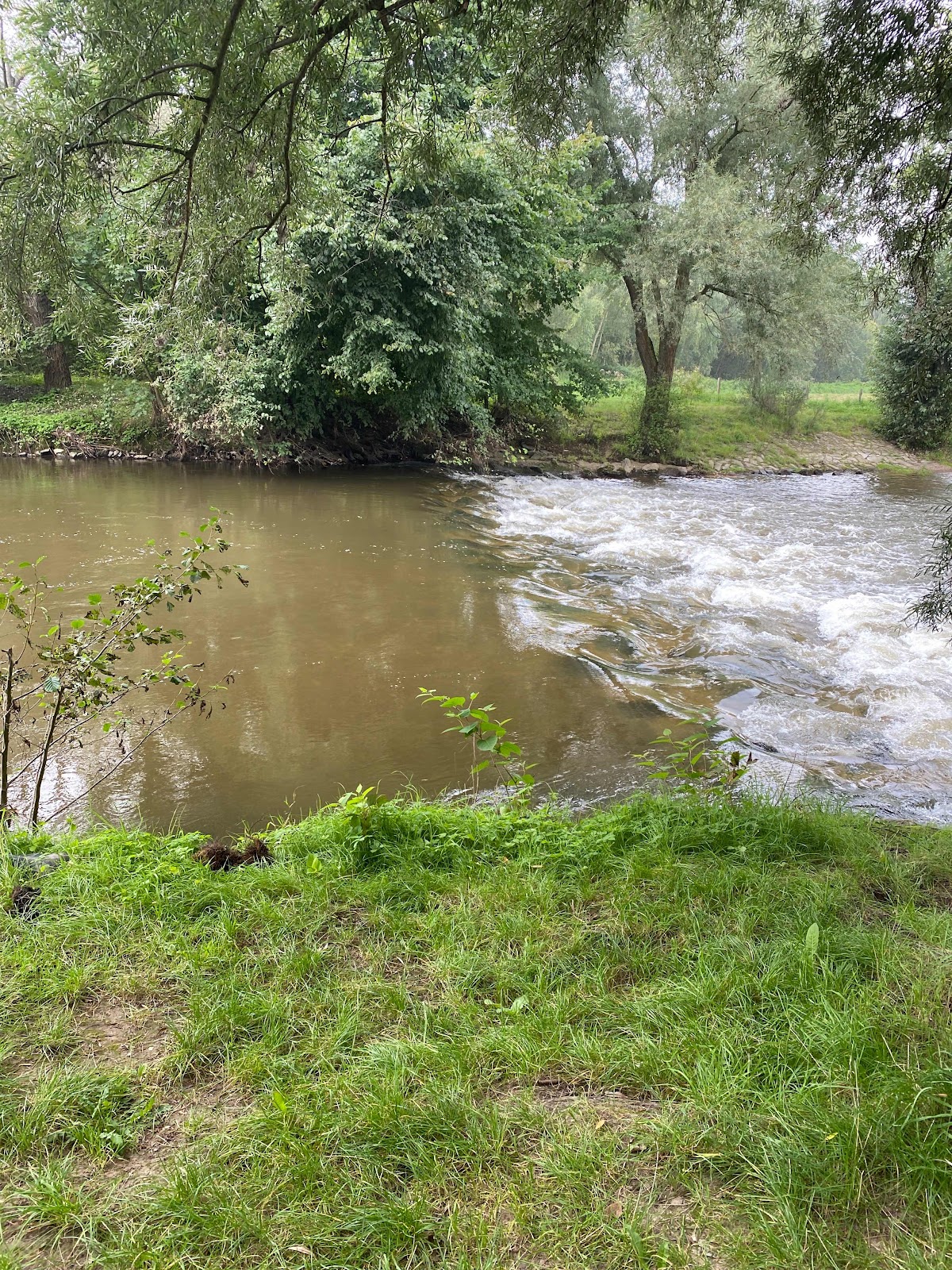 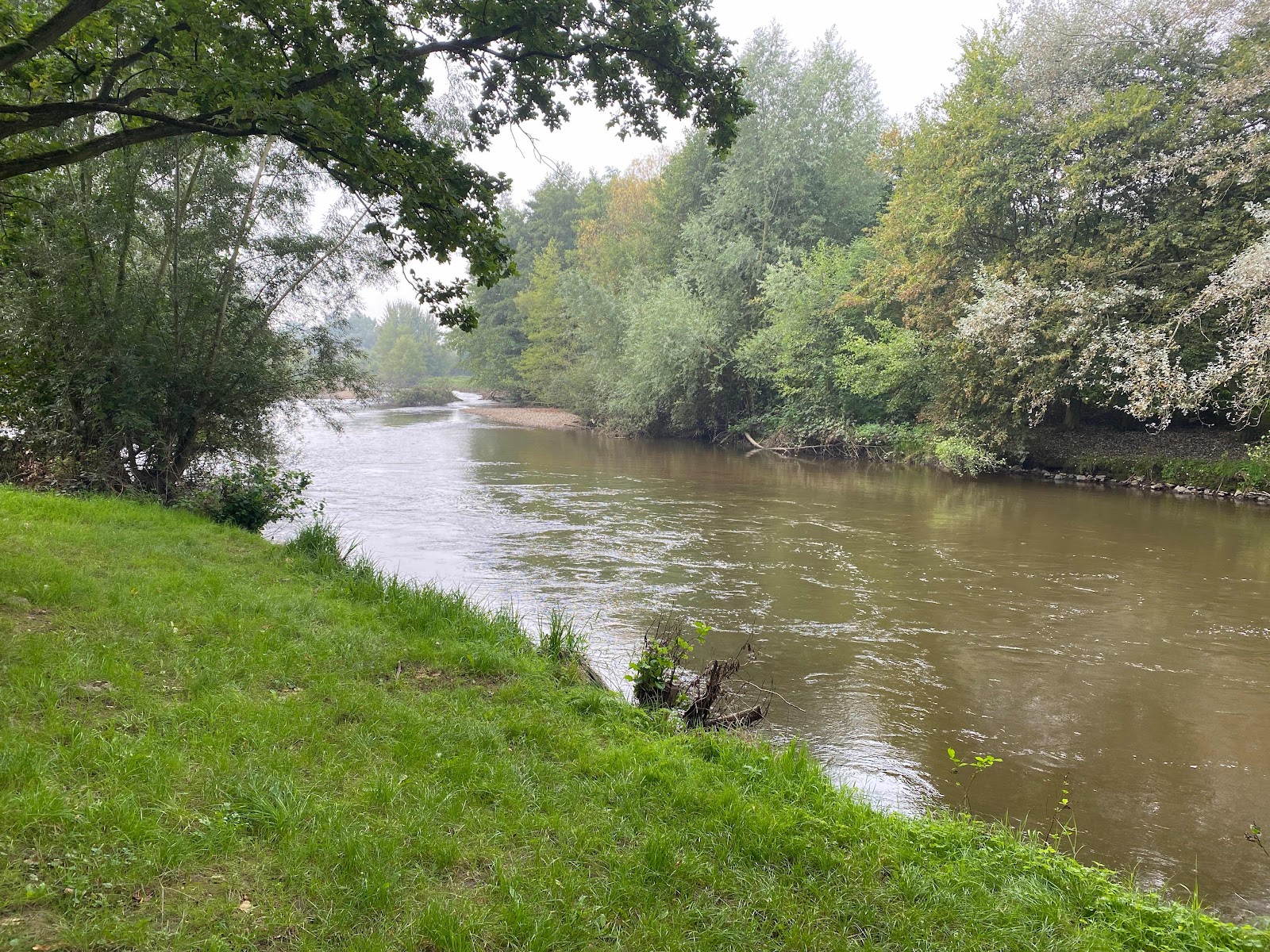 The day started cool and foggy, but by lunchtime the sun came up and burned off the fog. 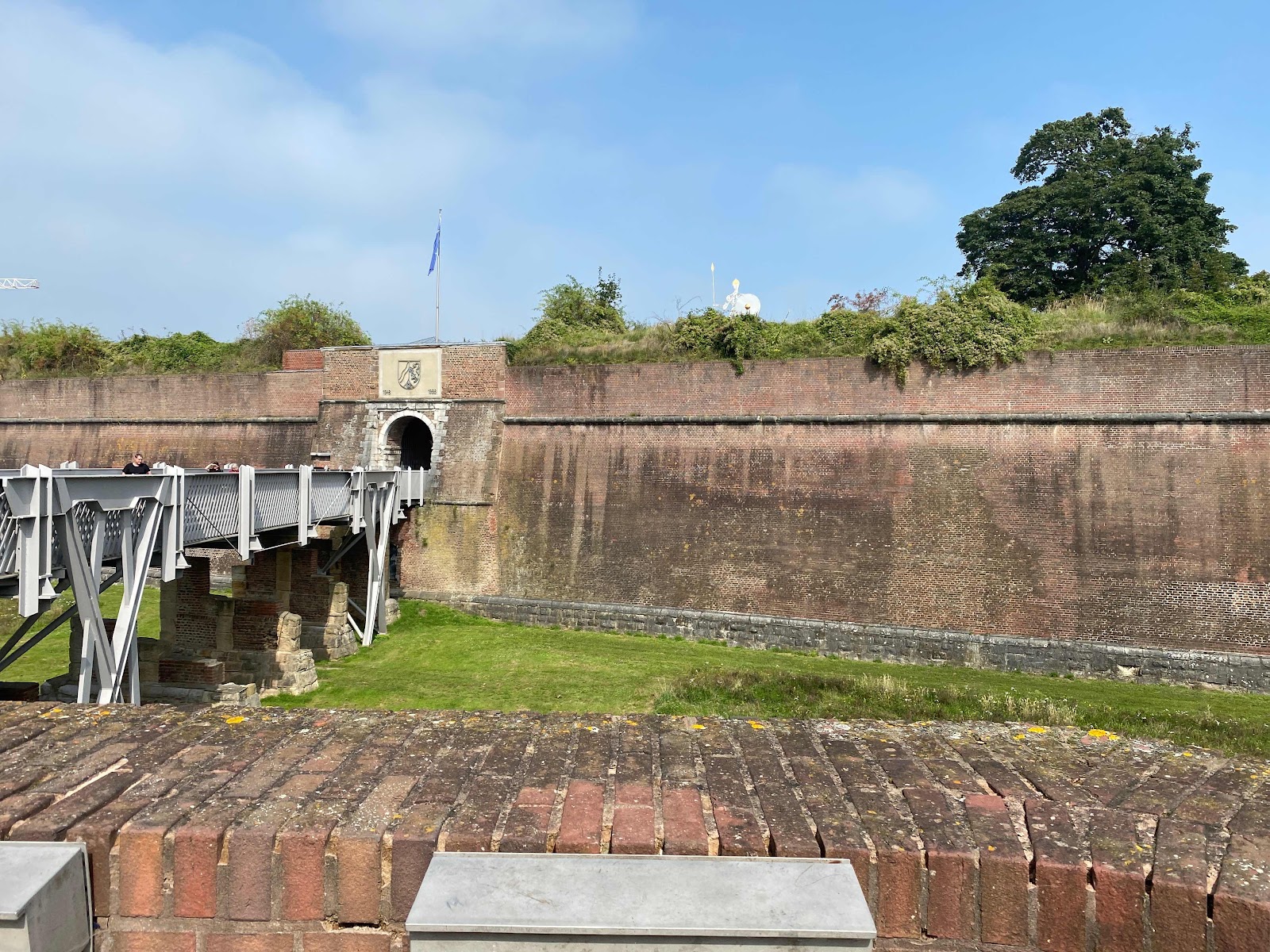 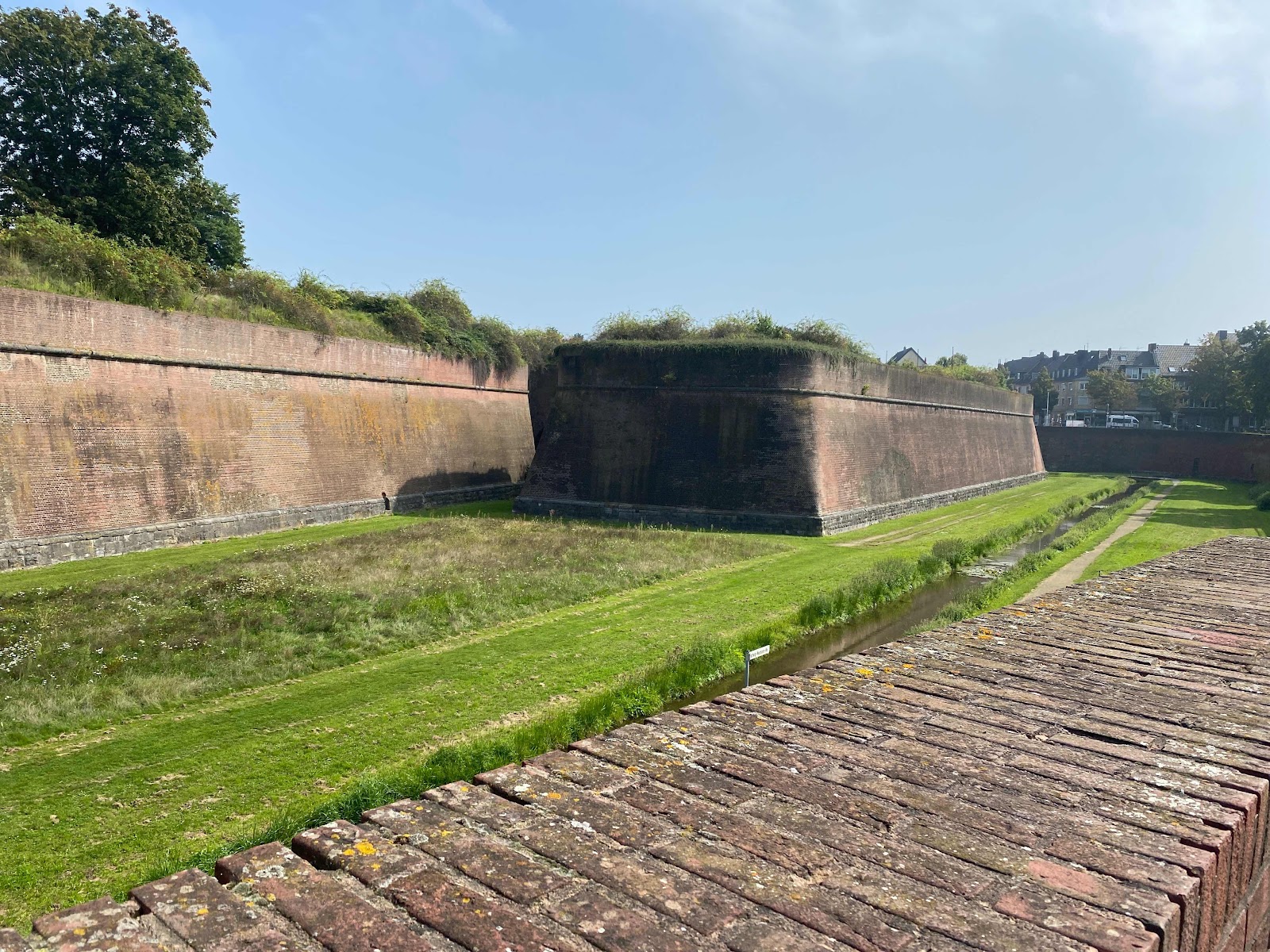 In Jülich we discovered an old Citadel which was worth a quick look. 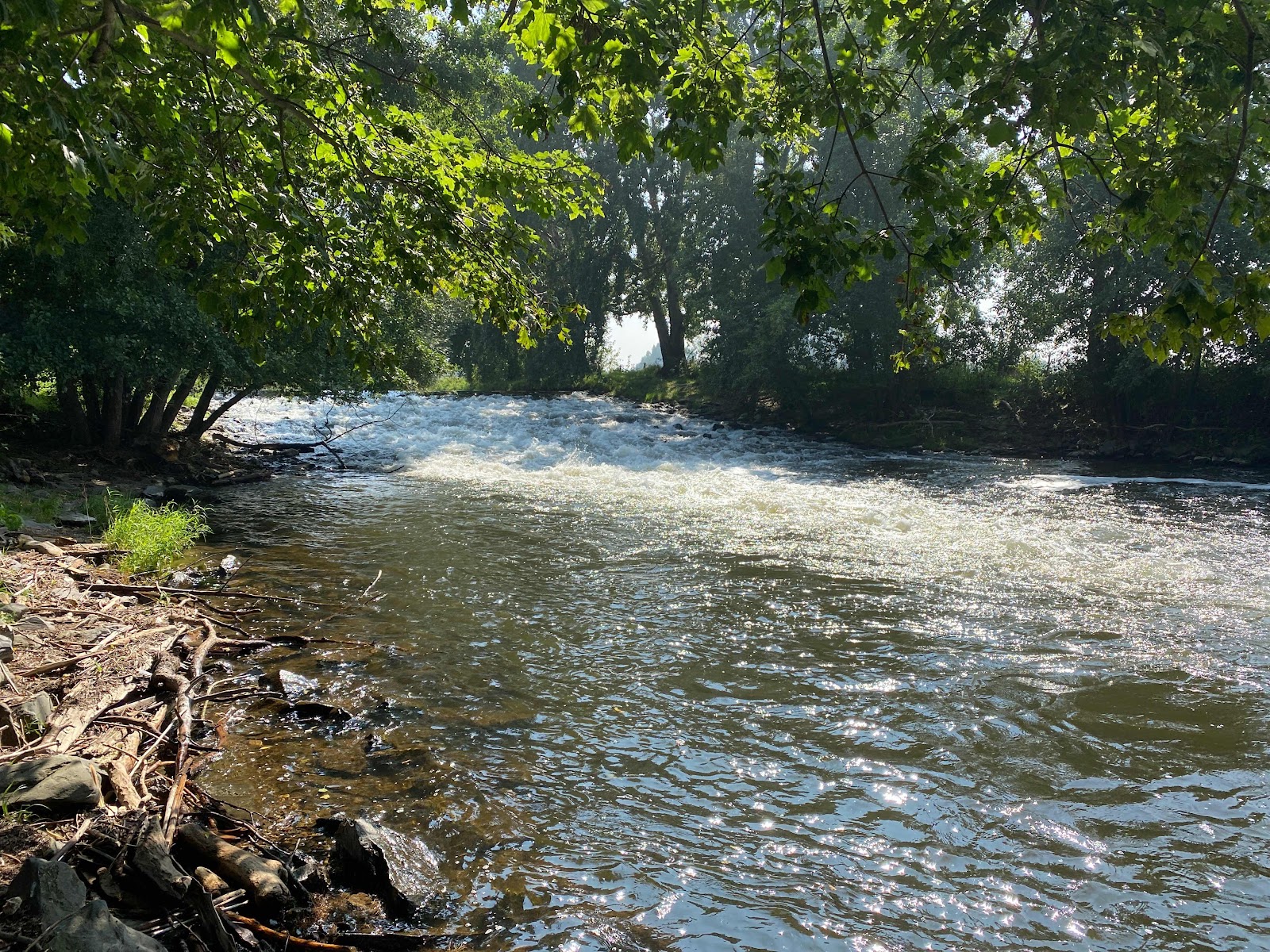 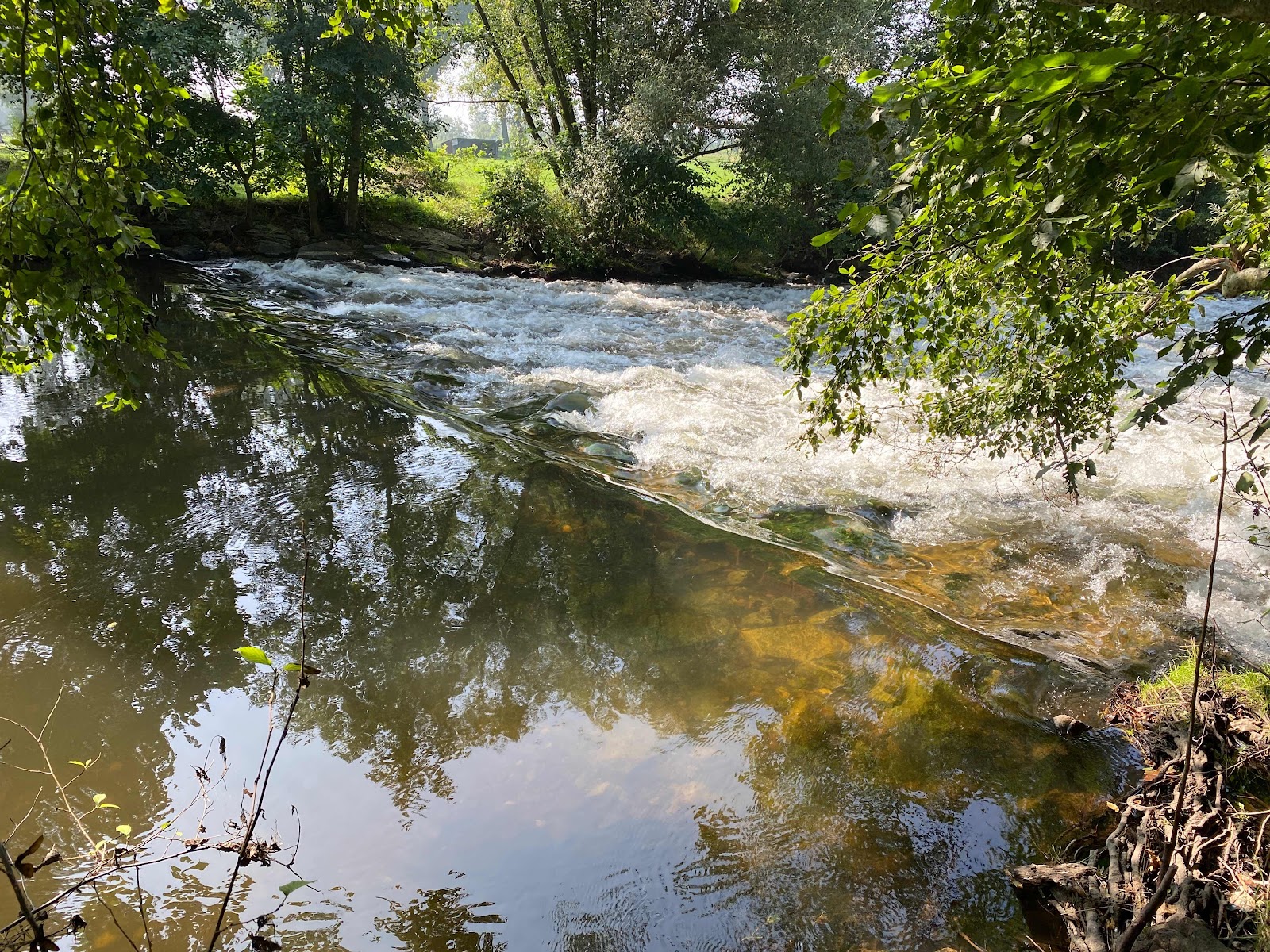 The route beside the river was nice and sometimes we were able to stop and enjoy the view and the sound of rushing water. However, often the route followed major roads, admittedly on a cycle track, but the traffic noise spoilt it.
It was nice and warm and sunny when we got to our next camping site! This was beside a swimming lake and looked really nice. When we asked for a tent site we were informed that they had none, nor could they tell us where one might be! Alan had an isotonic drink beside the lake and applied his grey matter on what to do!  A B&B it would have to be. Booking.com had not been used for so long now that we couldn’t use the App as our clot of a BBF had forgotten the password! The App Bett und Bike (bed and bike) came to the rescue with a bed in Düren, so off we set having programmed the GPS anew! 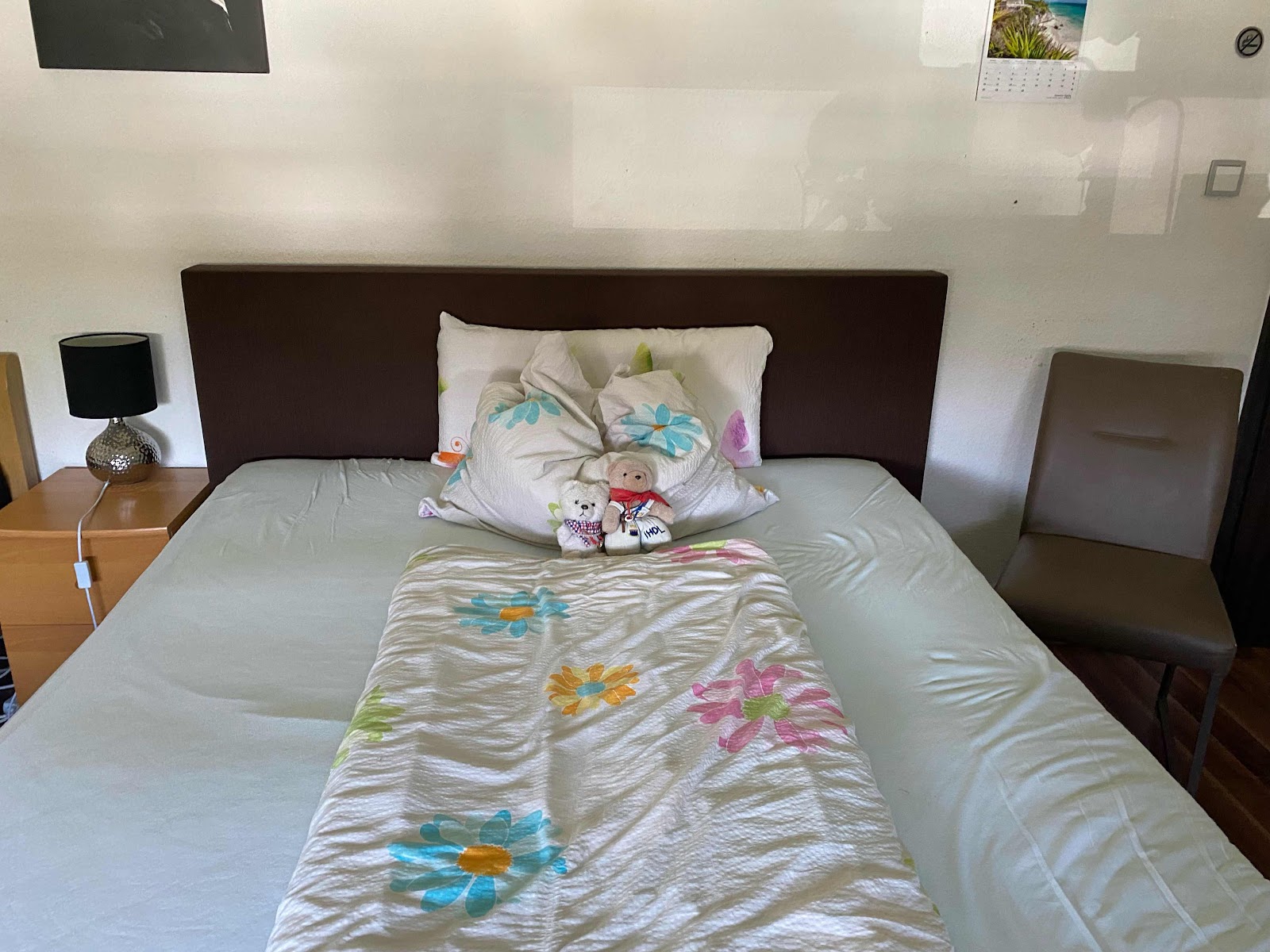 Sadly there was no breakfast in this place that seemed to cater to the Building Trade with itinerant building labourers staying. It had a kitchen where they clearly prepared their own meals.
Having had one campsite disappointment we did not want another so Alan checked and yes the next place didn’t have space for tents either! Alan’s aim had been to gather tent and campsite experience and not B&B, so as there were no campsites that accepted tents within a 60km radius, he said we would go directly home!
Having showered and changed he left us behind to go and find somewhere to eat! In the Centre of Düren right on the edge of the market square he found an Israeli restaurant called Nish Nush! Alan chose the Royal Jerusalem Street Style Dish which consited of Shaawarma, Kebab, Hummus, Amba, Tahini, Mama-Style Fries, Salad, Mixed Pickles and Zhug which was spicy. 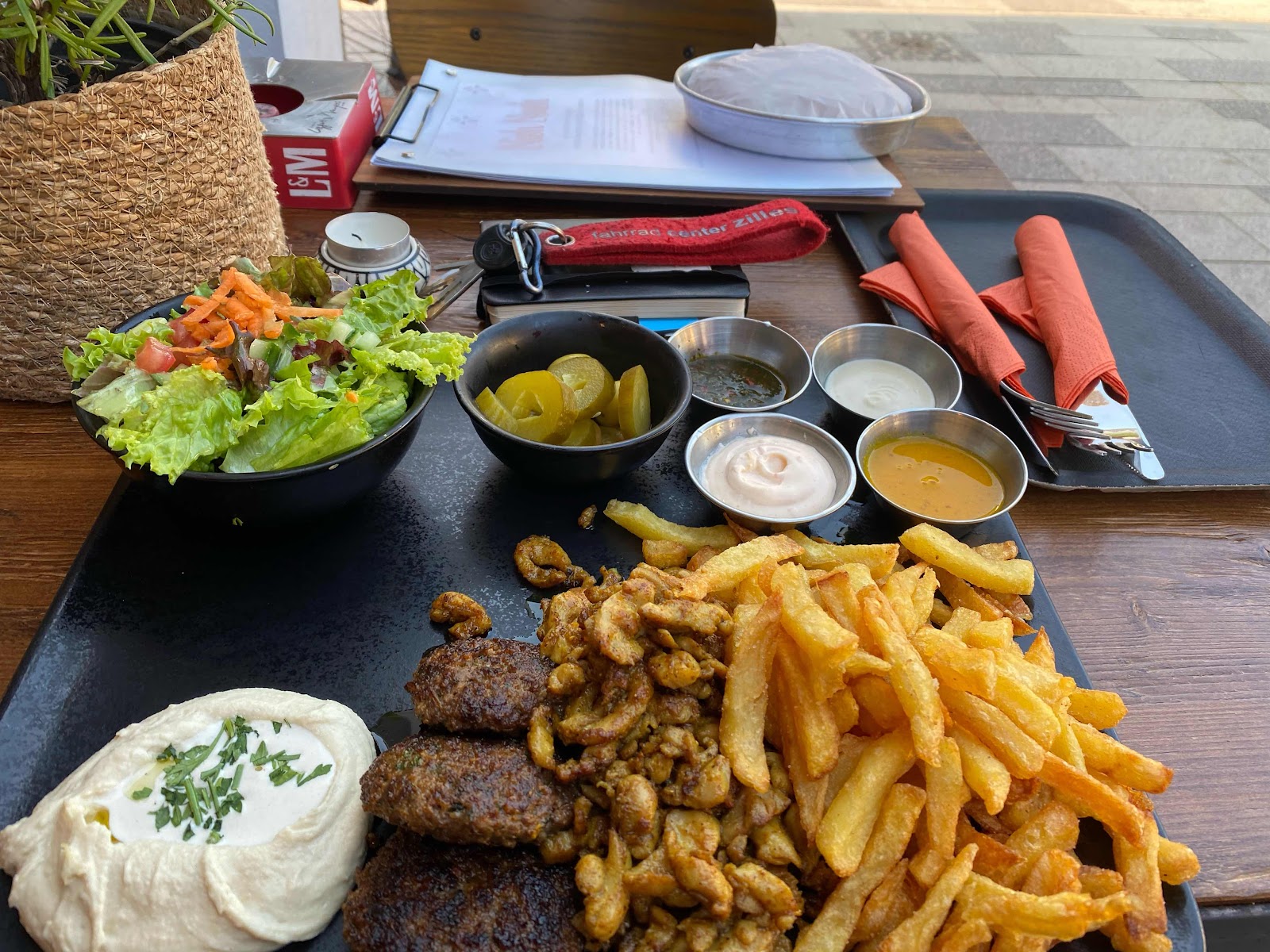 It was good eating and can be highly recommended. He washed it down with an isotonic drink and had a double espresso to finish! Since he had learnt from his mistake he had programmed the return route and returned to us without a problem before it got dark!
We all slept really well, but were rudely awoken by a neighbour’s very loud music alarm at 06:24 hrs! He apparently turned it off and rolled over again. We on the other hand were wide awake! So we got up packed our stuff together and set off around 08:00 hrs. Though the sun was up the morning was cool, so a jacket was called for!
A little way along the route home which now followed a main road we came across a junction with a Burgerking next to a petrol station on our side of the road and a McDonalds on the other side! Sadly Burgerking did not open on a Sunday before nine, so we crossed over to McDonalds which was open! 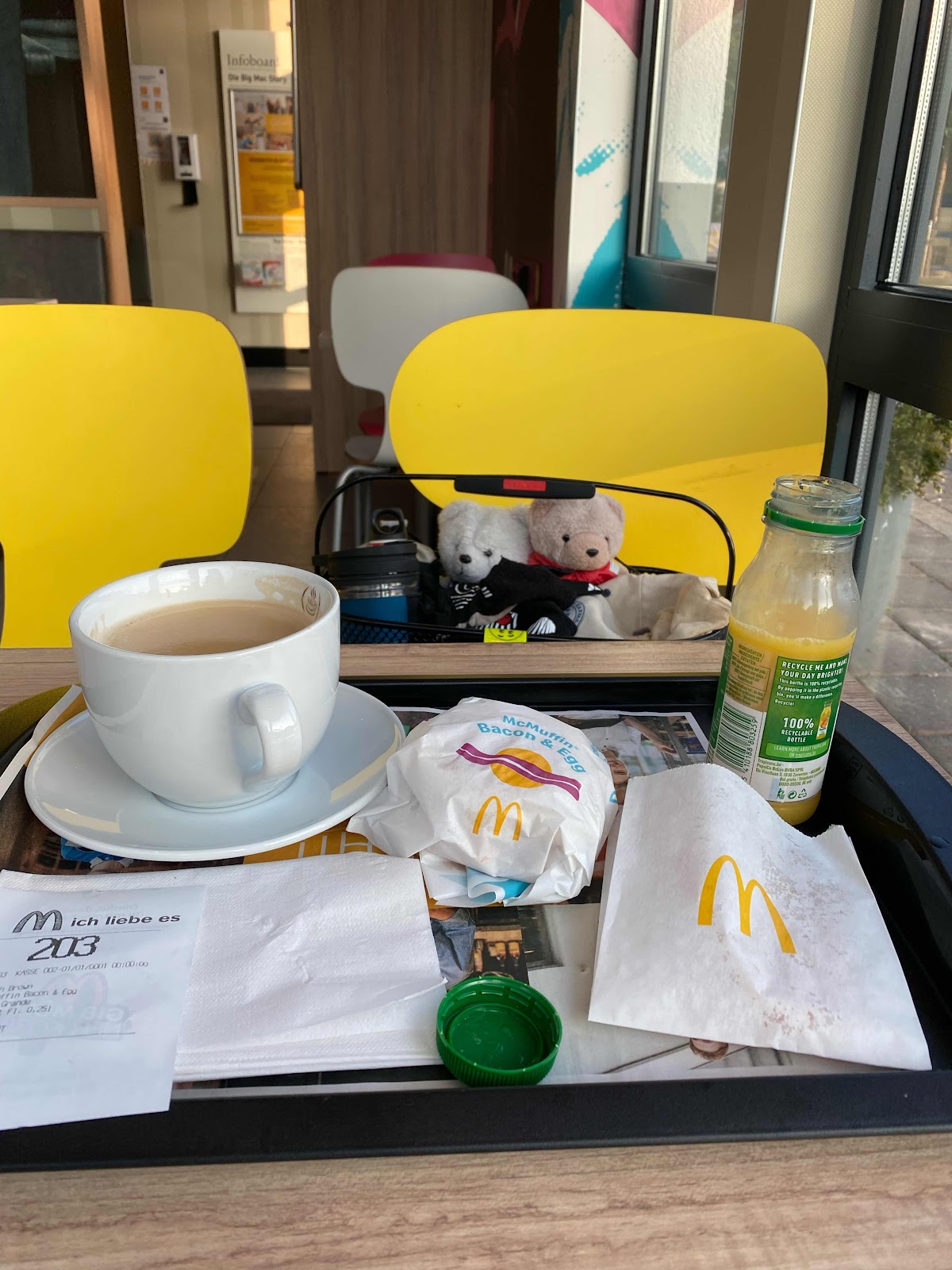 We took our time over breakfast using the wifi to check mail and the route we would take!
The sun had warmed the Earth when we next set off again so there was no need for a jacket anymore. 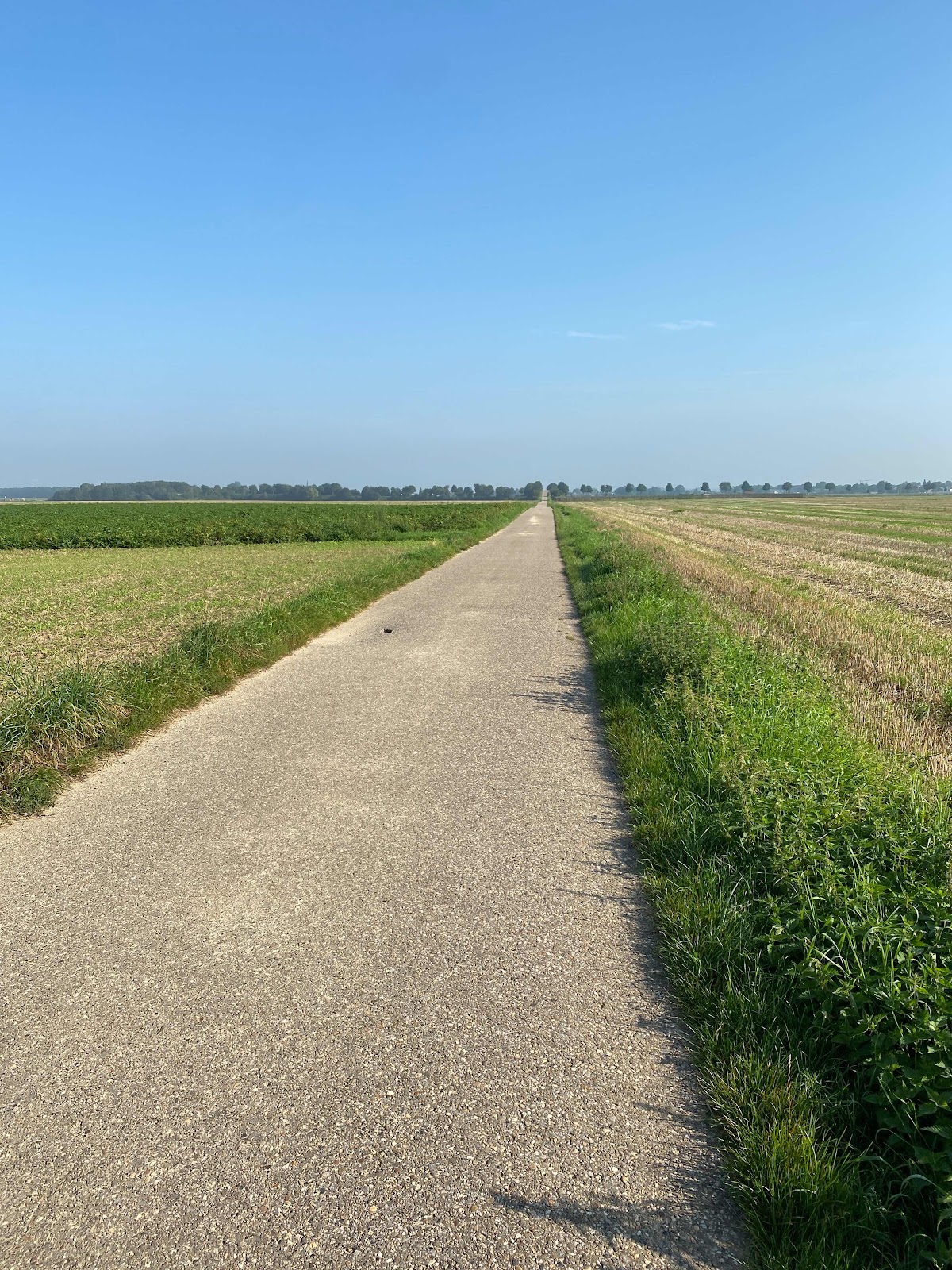 When we were not on cycle paths alongside the main road the route took us on minor farm roads and tracks through the country side. 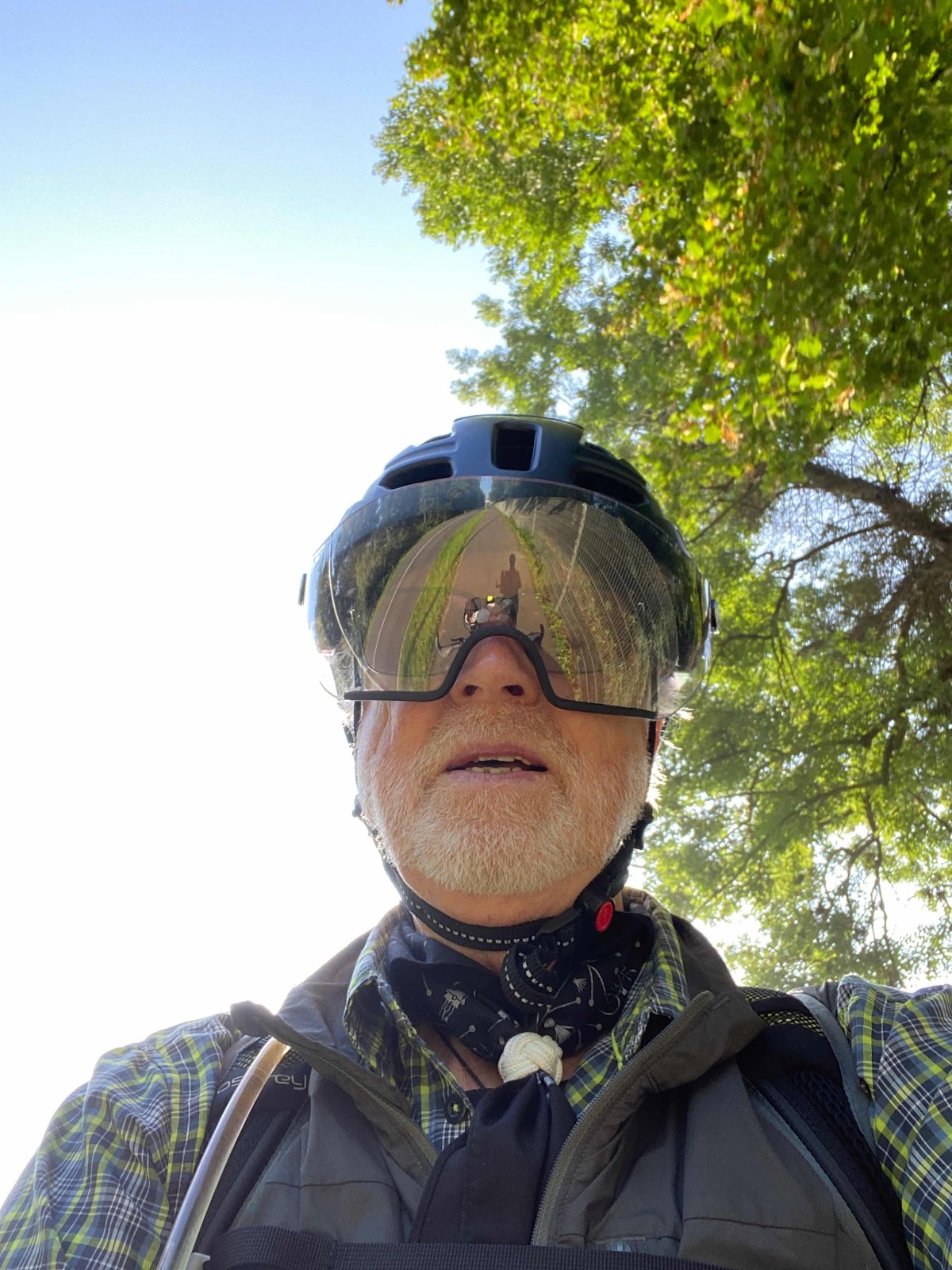 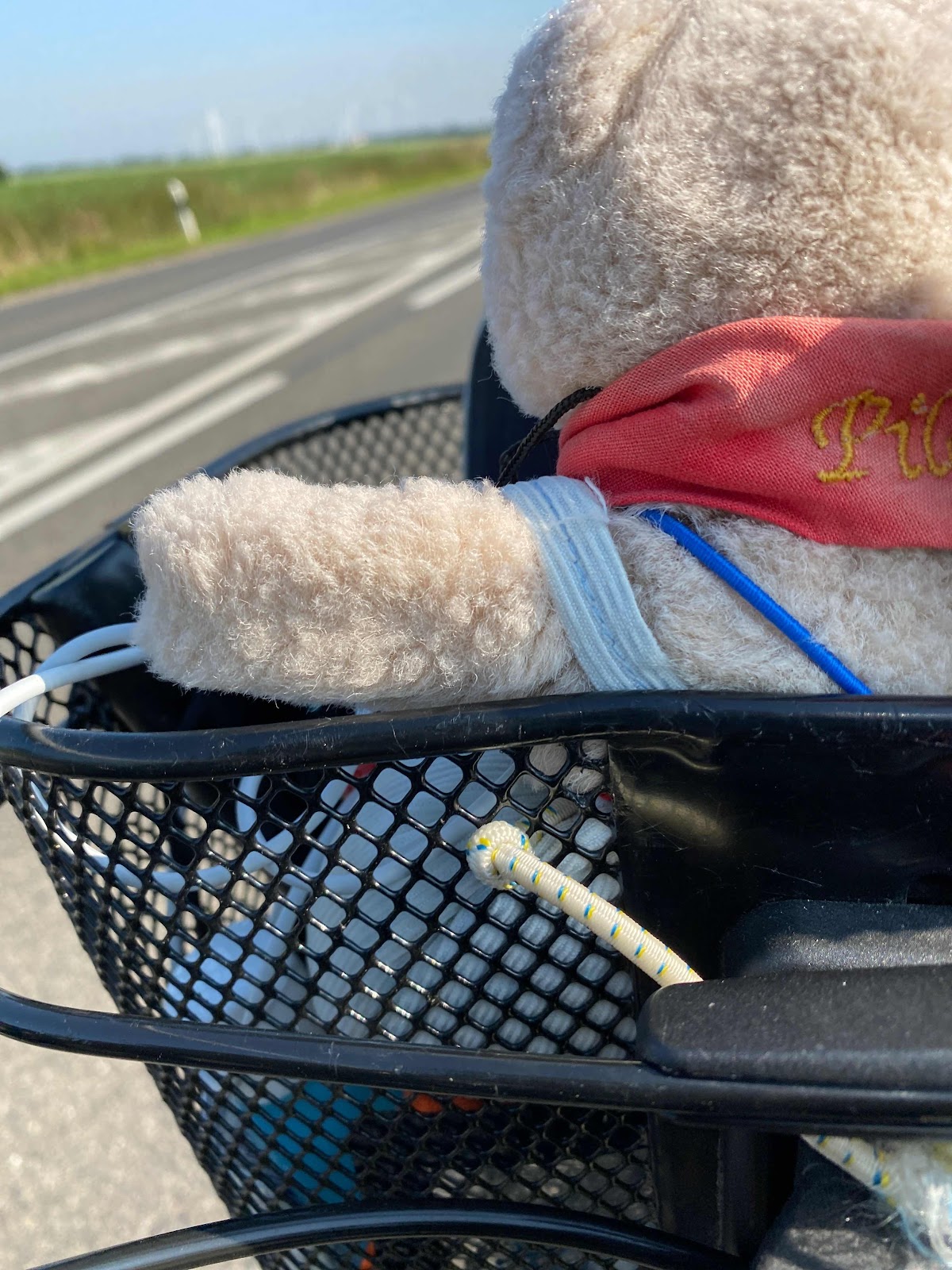 Sometimes we had to share the road with cars which we never enjoy! 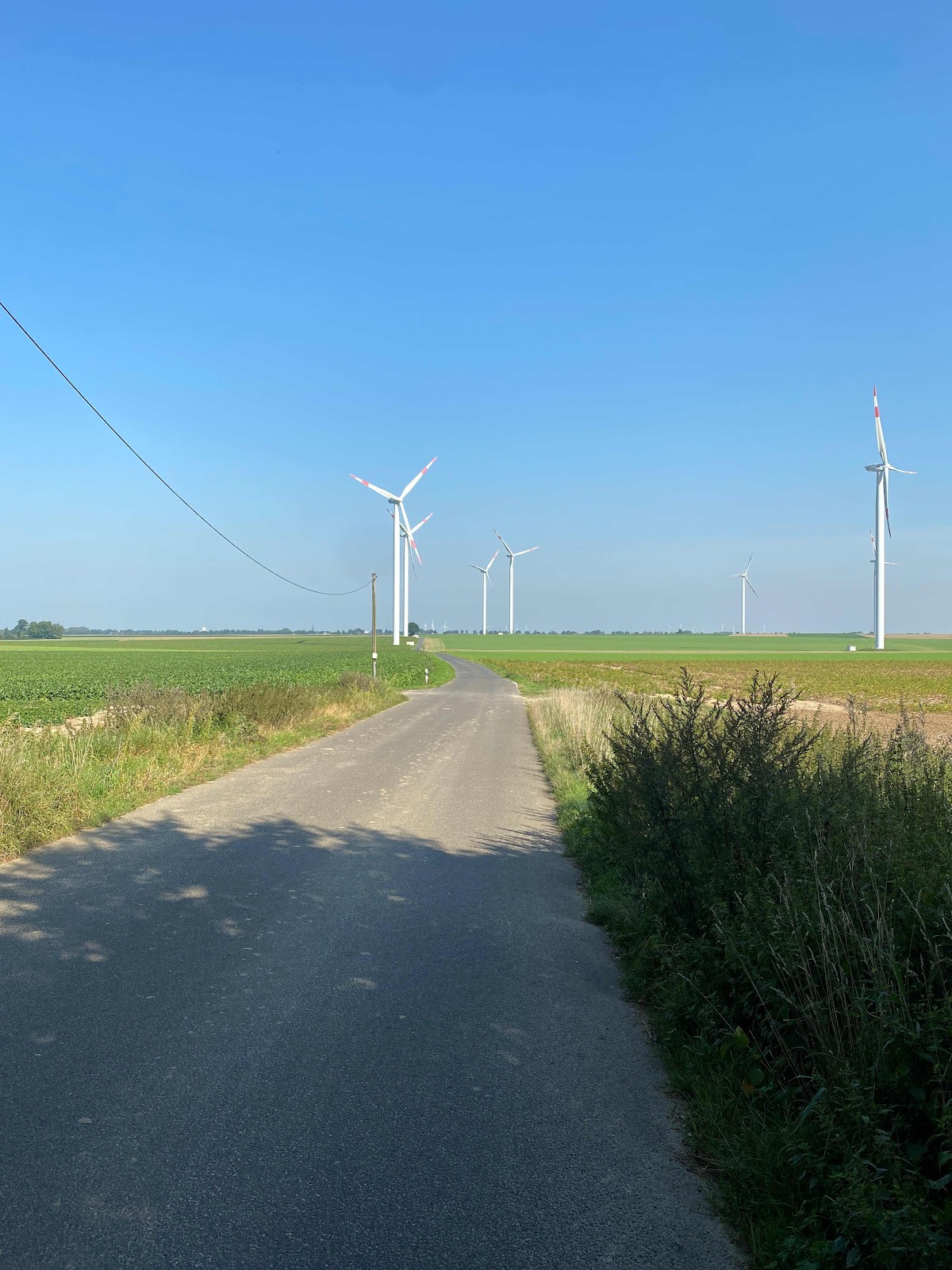 But it was a lovely Sunday and we enjoyed the ride home! 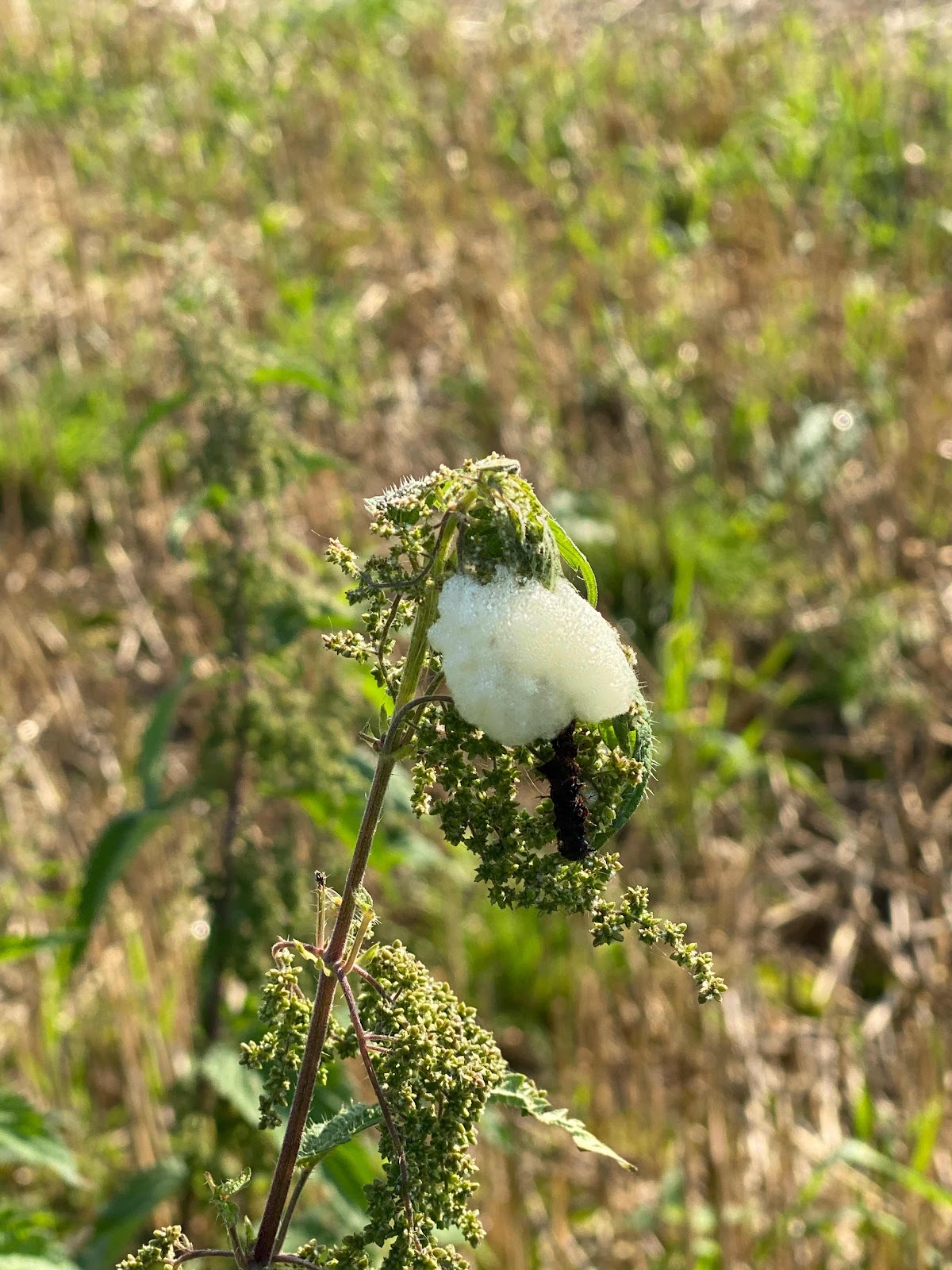 Cuckoo Spit ( Froghopper insect) found on the side of the road! 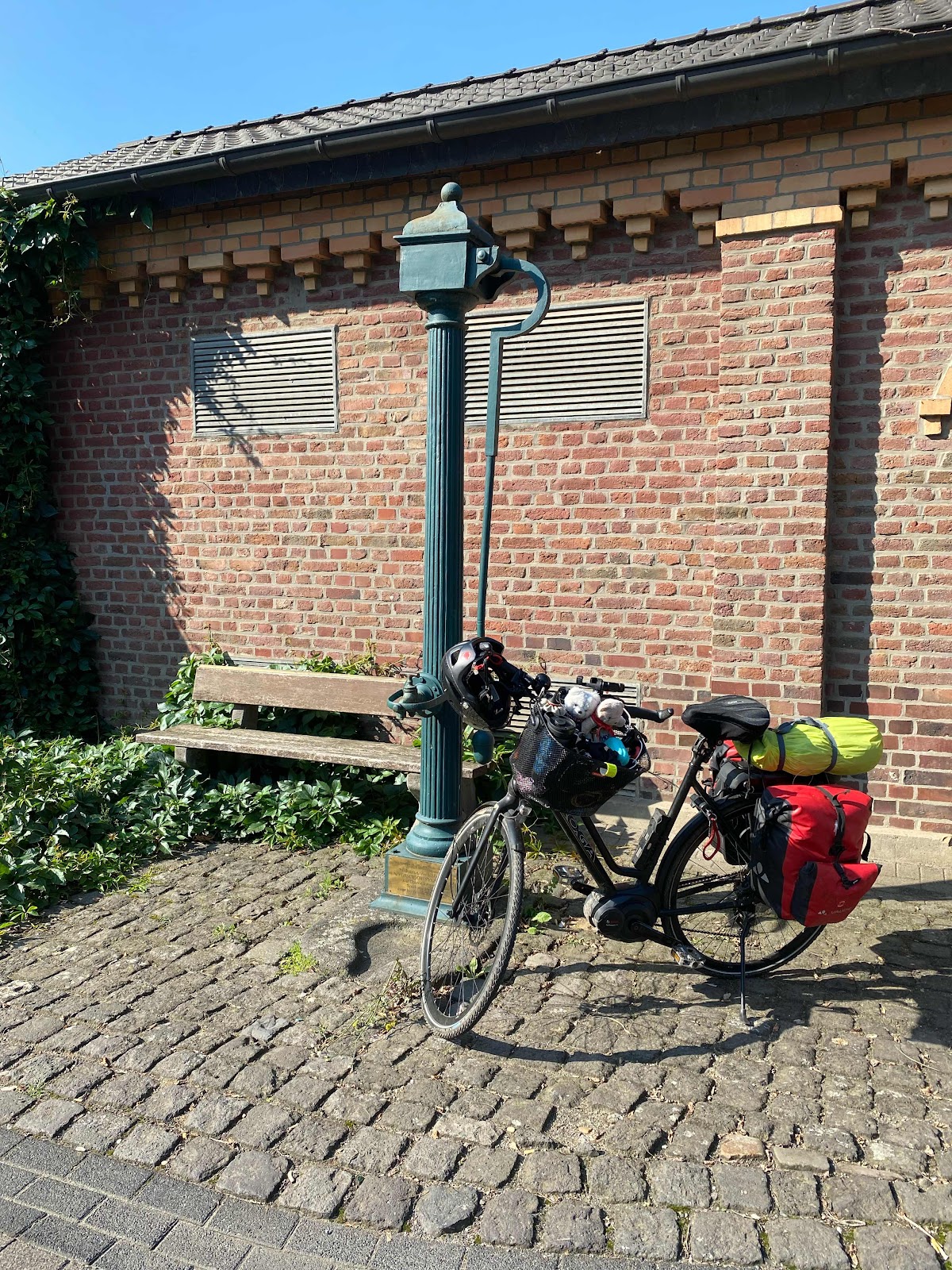 Places to stop and rest were few and far between, but when we found one we stopped for a rest and to drink, though our BBF with his water bladder on his back was able to drink and cycle!
Home was arrived in due course earlier than planned, but with some lesson learned for bigger and more ambitious adventures in the future!
Buen Camino!