I woke the other day to the realisation that I had become a 75 year old codger! How the hell did that happen? In my heart I still feel the beat of a 12 year old out for a life of adventure and excitement. Yet my body says wake up, you are over weight, have an artificial knee, arthritic finger and toe joints and a number of other minor ailments, we don't do adventure and excitement anymore. Rubbish I reply, you do as you're told. Sadly sometimes my body wins as I don't fold up the way I used to. 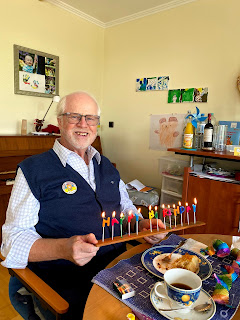 At 15 I wanted  to become an African Missionary, since Albert Schweitzer was still doing it, whereas all my other heroes were not only deceased, but the World had been discovered, so it seemed the only way to have this life of adventure. My biology and religious affairs teacher of the school I was then attending, was most impressed and agreed to help me follow this path. Sadly two major events then occurred in my life which led me down a different path. The first was yet another move and change of school, but perhaps more importantly I discovered girls and a celibate life did not appeal to me after all.

I joined the Army, following in my father's and my explorer heroes footsteps. This was a decision I never regretted and the rest is history as they say.

I have been fortunate in that I too stood on the shores of Lake Victoria and the source of the Nile and fished big Nile Perch out of the river so was at least close to where Speke and Burton had been. I have canoed down a river in Canada, maybe not the one Alexander MacKenzie canoed down, but at least in the same country. I have followed in the wake of Captain Cook, indeed in the Pacific I navigated with a chart where the last survey was by Lt James Cook!

During the covid pandemic lockdown I treated myself to some big boys toys, so the 12 year old heart was kept sane for a time. But we now have the urge to travel again.

I can say that it's been one hell of a ride so far and my 12 year old self still is out for the adventurous life. Being a grandfather means one gets to relive parts of the journey so far. Watching grandchildren discover the world and sharing their love of life and adventure is itself a great reward and very exciting.

My Canadian Camino brother and sister Dan and Pat have offered to take my on a canoe tour of the Canadian wilderness and my sailing brother Brec in the USA has promised to sail with me up the Hudson river. So my life is full and has promise of adventure and excitement to come. So an old codger I am, but I have no complaints and look forward to the rest of my life with the same sense of adventure as my 12 year old self did. Ultreia et Suseia!