Two weeks according to the cuckoo. 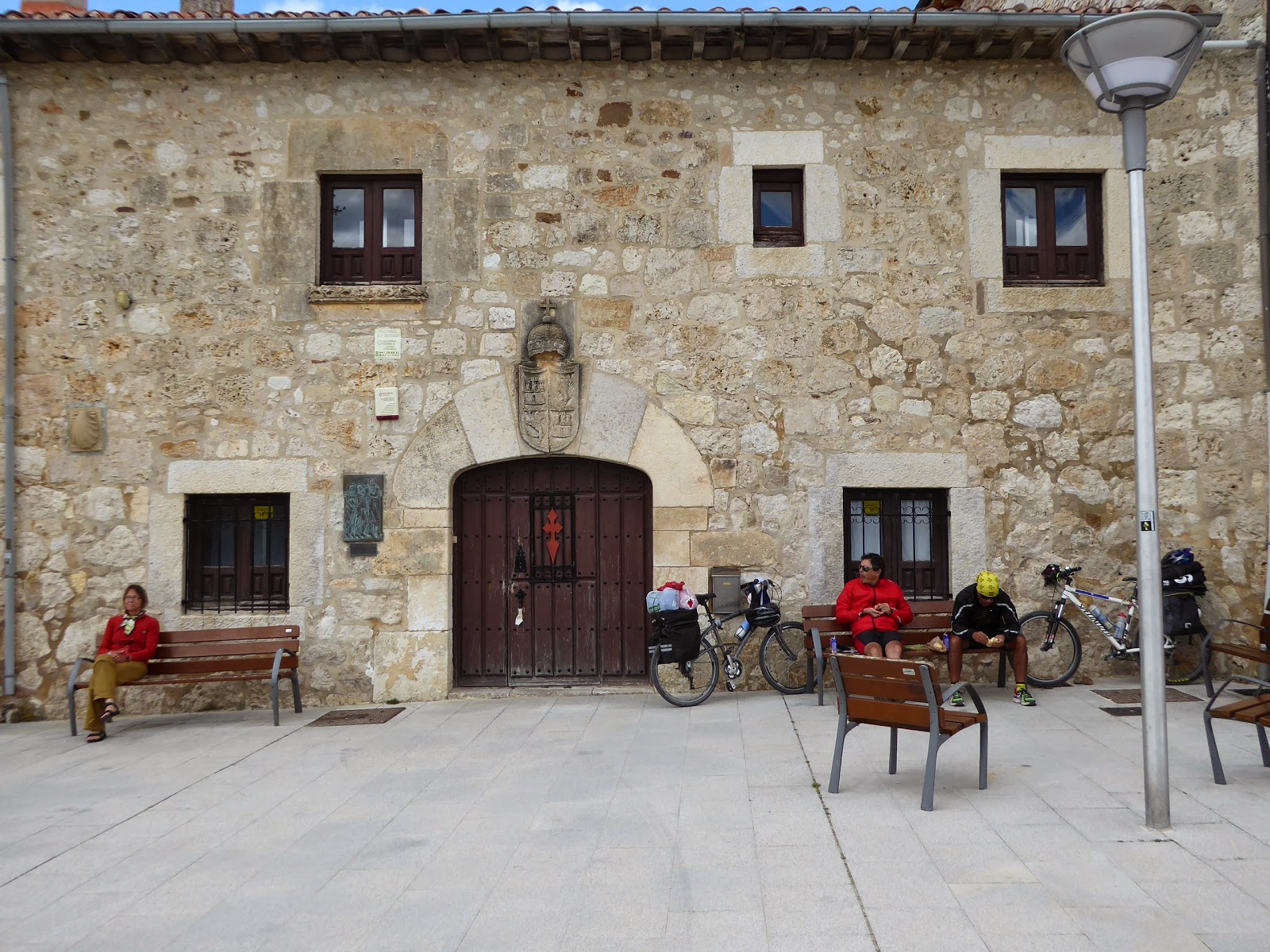 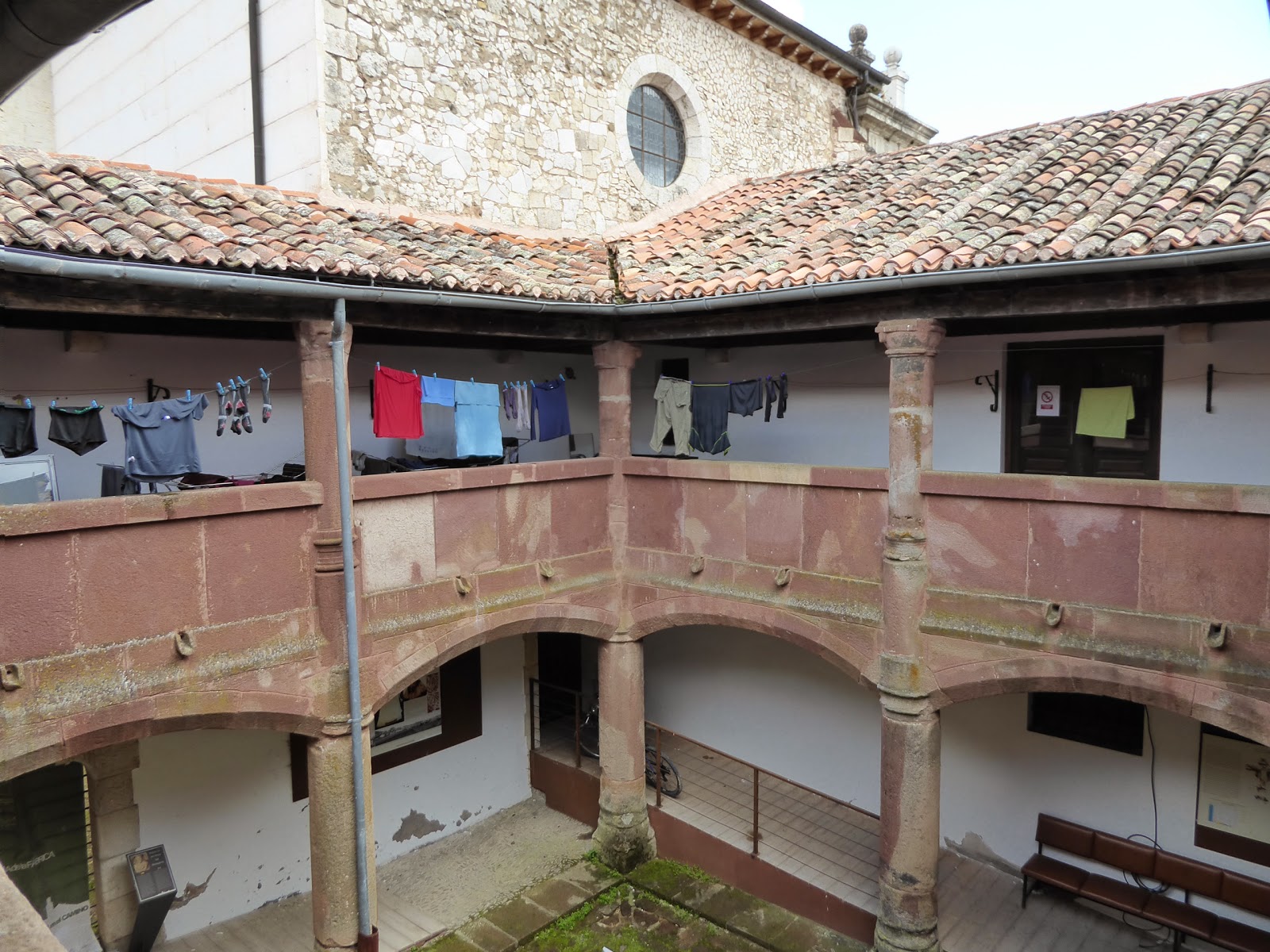 The cloisters where my washing is hanging on the left 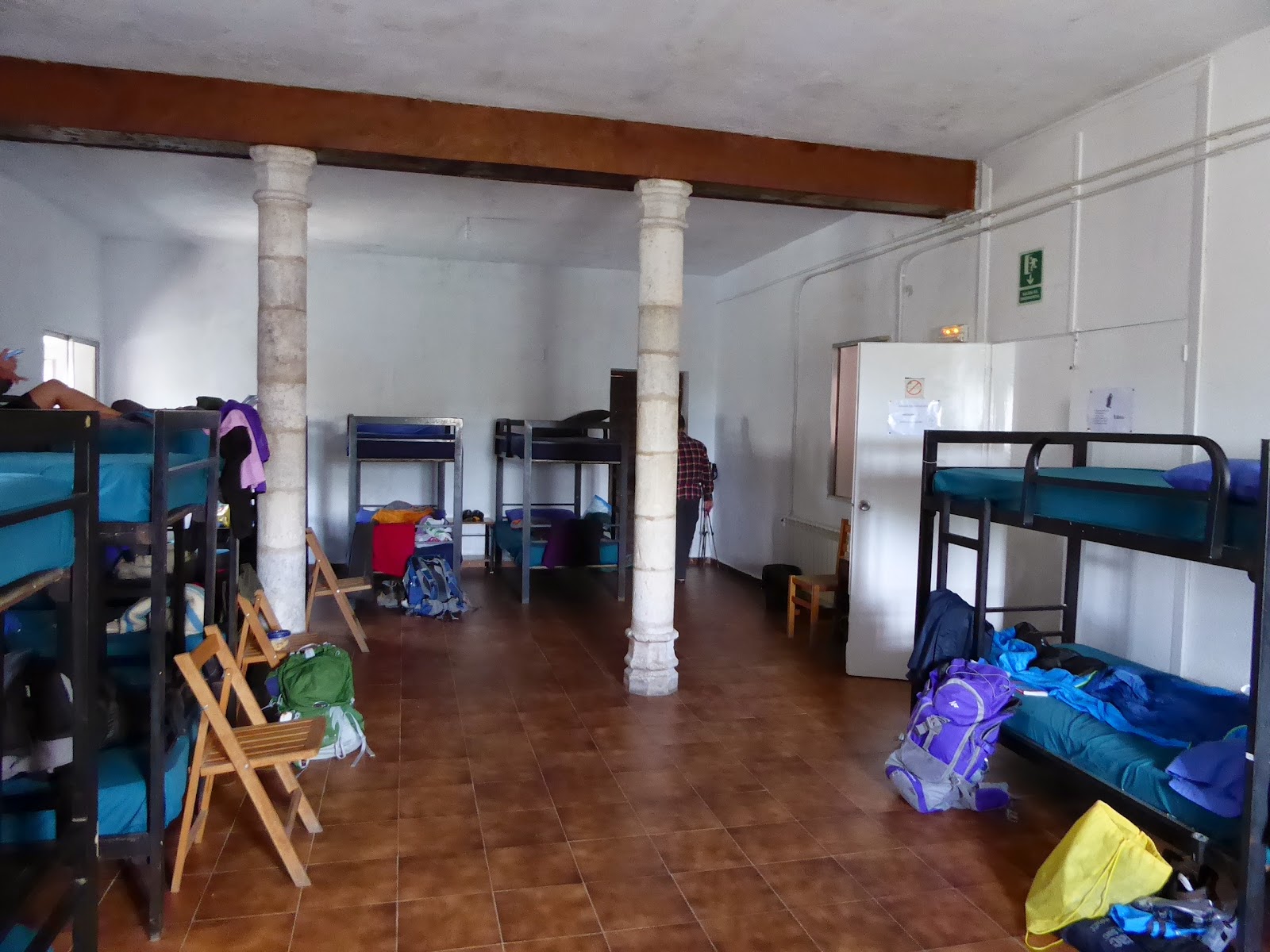 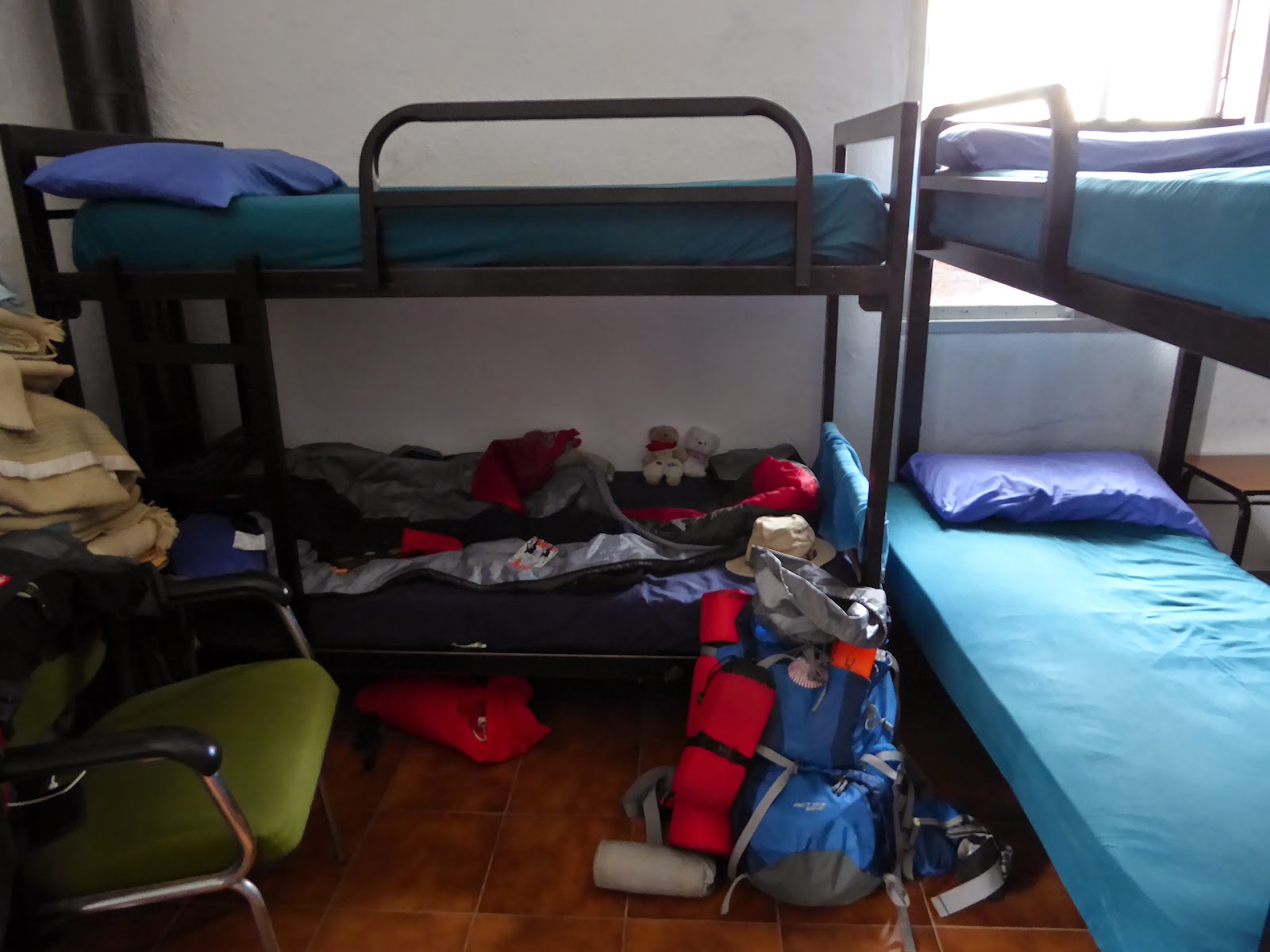 Our bed, typical of all bunk beds along the Camino 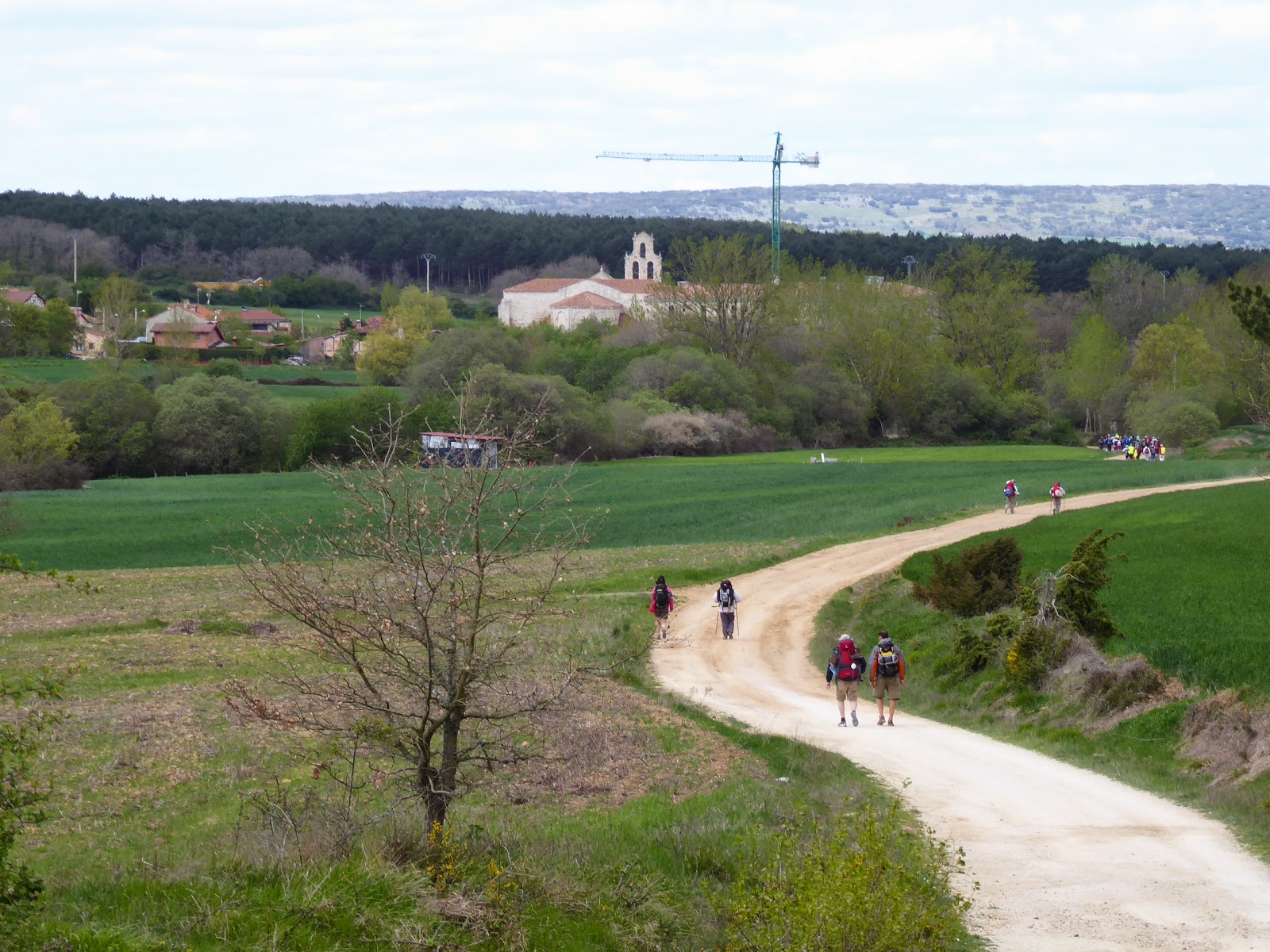 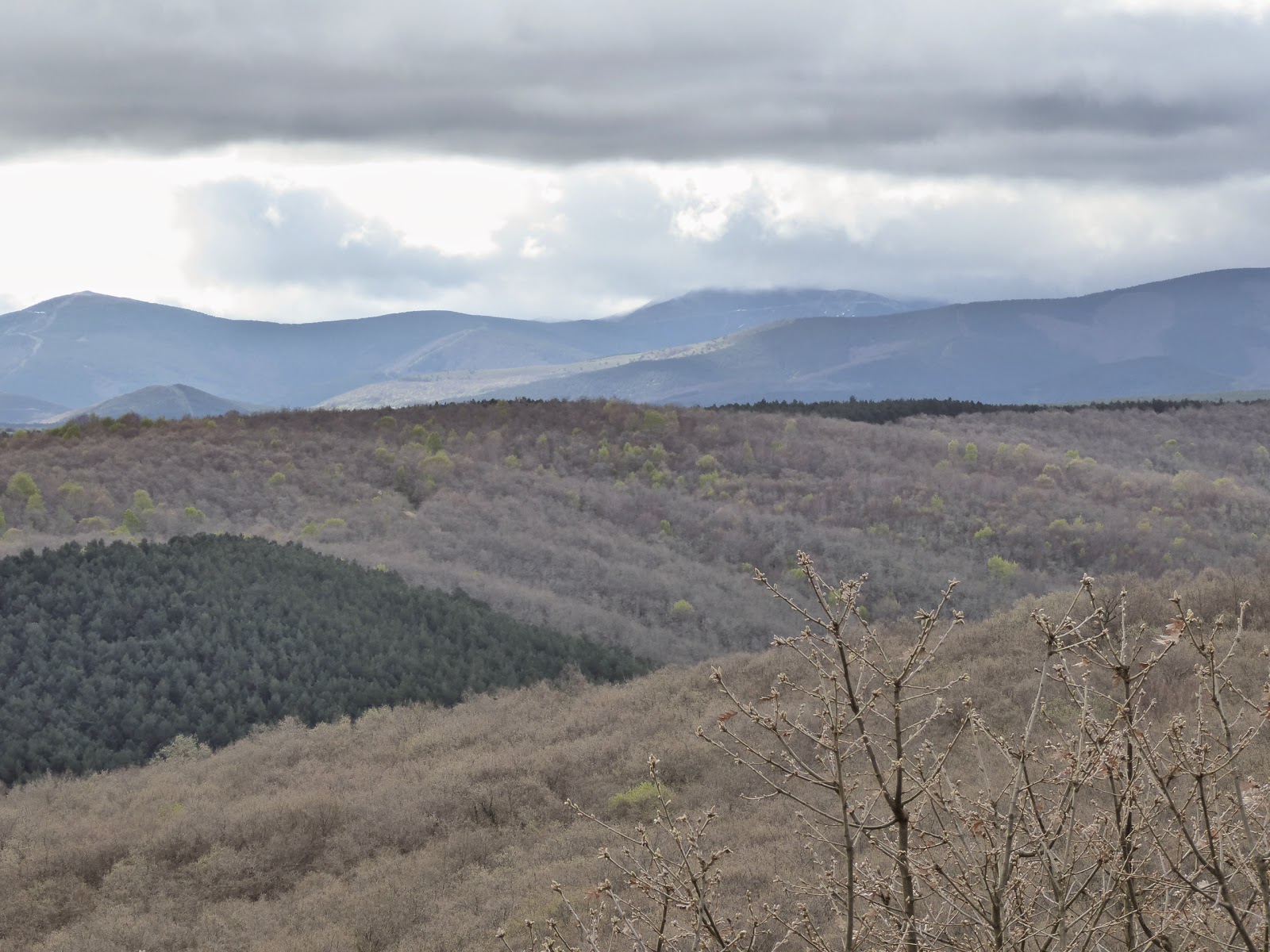 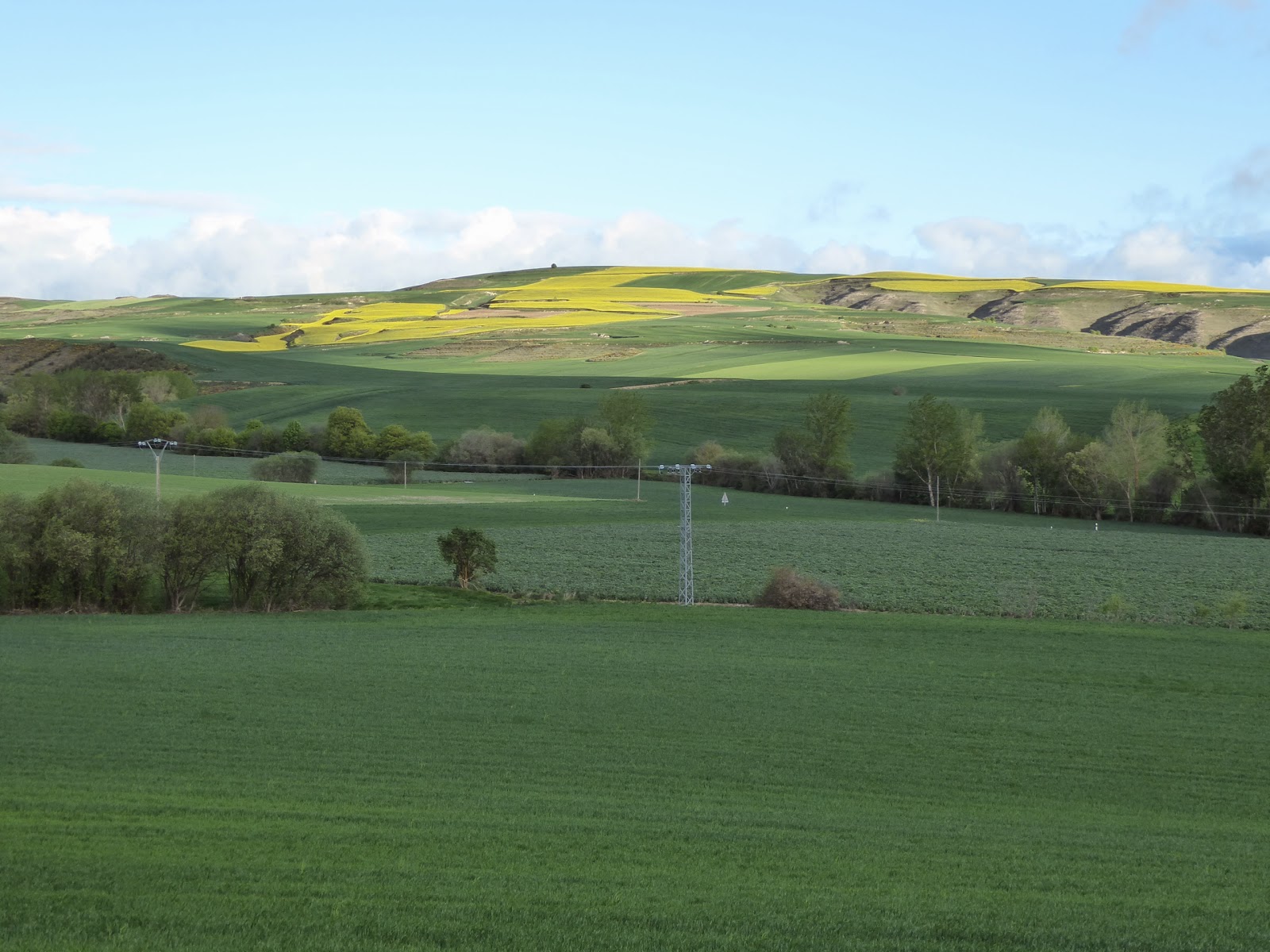 We have been underway now for over two weeks and we have to report that all things considered we are doing well. Our BBF, Alan is holding up well. We think he still walks too fast, but then that's just us, bears of little brain!
All along the way, from the very start in St Jean Pier de Port, in France we have heard a cuckoo. The bird song too is one of the marvellous things we have heard every step of the way. There seem to be many Larks as well as many other birds we do not recognise, but their voices are marvellous and delight our every step. May be it's just because we are up early, either way we are thankful. Now we are also in the area of circaders so the air is never silent. Nor are we alone on the Camino. There are many hundreds of walkers from all nations, which is perhaps why it is so unique. The reason they are here is as diverse as the nations represented. There is though universal respect for each other as they are all doing it, each carrying his/her own burden and walking at their own pace. It is always a pleasure when we see a familiar face at the next overnight stop. Today, Thursday, 7 May, we even met two perigrinos on bicycles who had been in the same Spanish course with Alan, way back in February!
Alan likes to walk alone. He is happy to converse with pilgrims in passing, but prefers to remain silent as he journeys. So it is that when the chattering masses, as he calls them come up behind him, or he overtakes them, he does his best to keep away. It is not just the women  who seem to talk all the time either, the men do it too. Some of these conversations are not worth the breath either. A couple of German men were being very arrogant about what was necessary to walk the Camino, for example and a couple of young women were chatting for chatting sake about clothes and men. One young woman's voice was so loud that as they passed, Alan could not resist asking them to moderate the tone!
They say that it is during the third week that pilgrims experience strong emotions. Alan has done so from the start. In Roncesvalles at the pilgrim's mass when the blessing came and he was thinking about Hanna and why he was there, he experienced a feeling of such joy that he wanted to cry.  Then when we left Zubiri early in the morning he was thinking about Hanna's last days and was so saddened by the memory that he just wept for the next kilometre! Then  the feeling he had was of calm and peace. About three days ago now
he again was thinking about Hanna, but of the life and love they had shared and was overcome with saddness and loss that again he wept for quite awhile and thereafter was filled with peace and calm.
We have done our best to visit all the churches in the towns in order to pray for the family and friends who are in need of God's help and support. Alan's view is that is what we are here for and so we must make the best of it. In the monastery in St Juan de Ortega all the pilgrims after the blessing were given a cross to hang around their neck. Alan wears this outside of all his clothes as a sort of badge of office now.
This gesture is typical of the friendly nature of all the Spanish we meet along the way too. At no time have we had the feeling that they want to exploit us. When having a pilgrims meal, which are at so reasonable rates and include water and wine, the host never expects a tip. The cost of most things is reasonable and certainly cheaper than Germany. As are the hostels where we stay. Some pilgrims are so worried about finding accommodation though, that they spend much time trying to book ahead. Alan works on the basis that God will provide.
The weather has been good to us too. We have had a couple of really cold days but now the sun is shining and the forecast looks good for more of the same. As we write we are in a small town called Hornillos del Camino. There is very little here, but our hostel is comfortable and we have made some new friends and so all is right with the world.
Buen Camino!