What’s the use of being a travel blogger if you can’t blog due to technical difficulties? Life for us bears is not always as easy as you lot seem to think. Obviously if you are reading this we are back on line, but let us go back to the beginning.

We left Gozo on Monday in brilliant sunshine. “A” kindly came and took us all to the ferry terminal. We had such a nice time with her being shown around this lovely little island, but all good things must come to an end. Alan did invite her to come and visit us in Germany so we could reciprocate the kind hospitality shown us. Maybe next year she said!

The journey back was largely uneventful. We saw again all the new hotels and holiday camps which have been erected around Melliha Bay and even St Pauls Bay has changed almost beyond recognition for those old Malta hands who used to come here in the 80s and 90s. Alan even came in 1968 for the first time and he said Strait Street in Valletta was a red light district in those days!!!  “It was because all the nice girls love a sailor,” he said. We didn’t understand it, but he wouldn’t elaborate! Mass tourism has its price he was then heard to remark.

When we got back to the lovely little flat in Senglea we were treated to the view of an oil rig being towed out of the Grand Harbour. Better than seeing cruise ships we thought. Then we discovered our technical difficulties. We could not get onto the Internet at all. Our mobile Wi-Fi was on strike! Strangely late at night it came on briefly, but then dropped out again. While he had a connection he was able to agree to meet his friend “L” for coffee in Valletta in the morning. Alan read a book, or rather his Kindle and eventually went to bed early in disgust at not being able to email or surf the web. 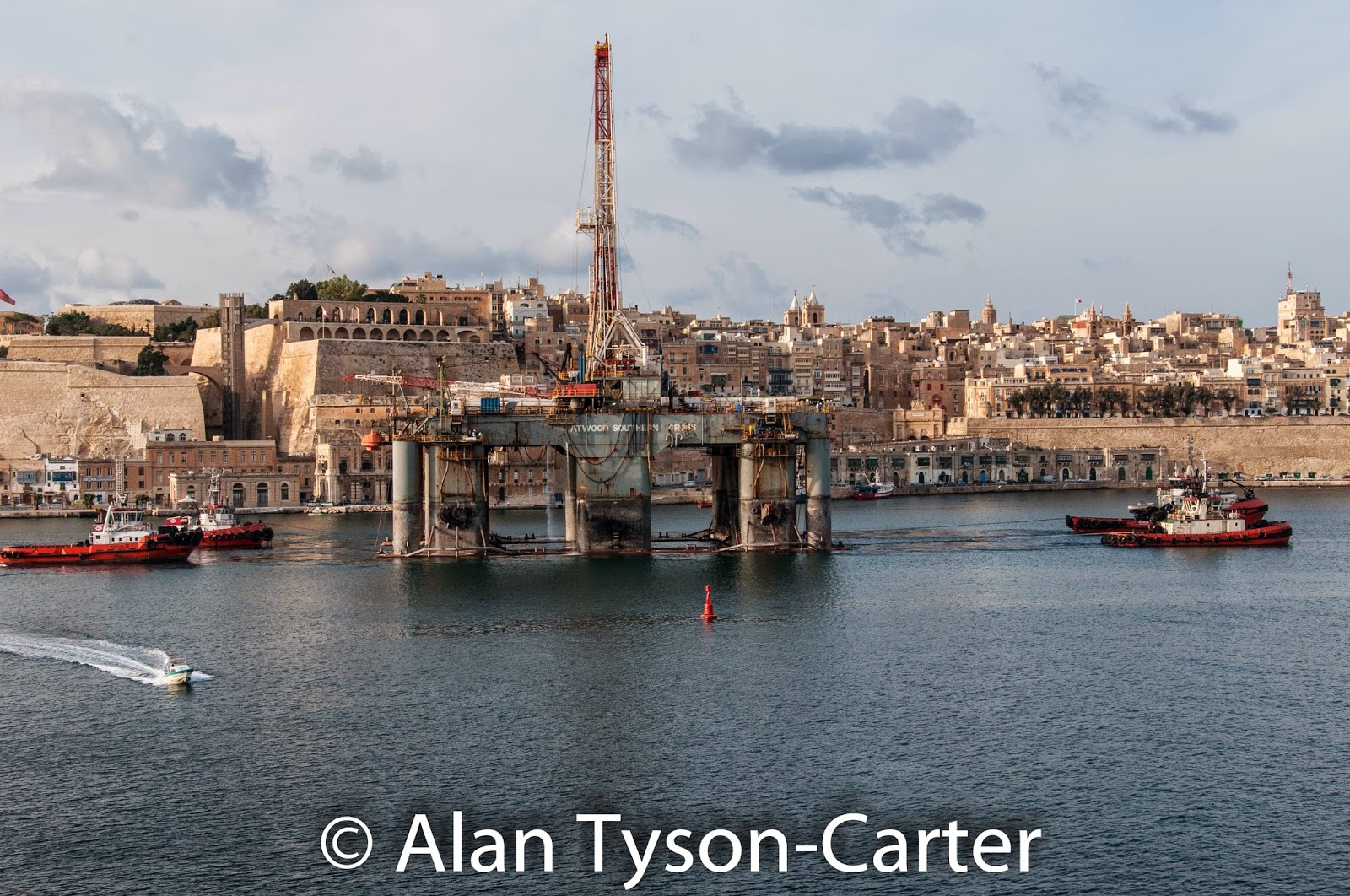 Early to bed generally in this household means early to rise and so it was that we were all awake at dawn. Alan likes dawns, but we prefer to sleep late. We enjoyed the view from the balcony over a very leisurely breakfast.

After breakfast Alan went to the “GO” shop where he complained that he could not get on to the internet. The nice young lady there then showed him that it was his mobile Wi-Fi which was at fault as she could not use it with her phone either? As we had to get on the ferry no immediate solution was found and Alan said he’d come back later.

As there were no cruise ships in, Valletta was relatively quiet. Alan was to meet “L” in the Café of M and S of all places. He knew where it was so took us straight there. “L” was already there and they decided to go out into the sunshine and sit in a Café in St George’s Square. These two then just talked the morning away and then to cap it all, changed Cafés for a light lunch and went on chatting. After lunch “L” showed us where we could buy one or two nice souvenirs. She also recommended one of the places we should see. Casa Rocco Piccolo. When they parted Alan took us more or less straight there.

We sat for a little while in the courtyard of the Palazzo until the time for the guided tour began. Sadly one could not take flash pictures in the Palazzo and so we have few to show you since the light was too poor. However, this Palazzo is the only one still in private hands and lived in by the owners which is also open to the public, a bit like some Stately Homes in the UK. Of interest is that Alan had to carry his pack on his front, so for once we saw what he saw going and not leaving as usual!! They said this was to ensure he did not sweep some glass crystal off the table when he turned round! Well I ask you is he a bull in a china shop? Don’t answer that!


Sadly their shop was closed for restoration so we were unable to buy any souvenirs there.
When we came out of the Palazzo the sun was beginning to set and so we made our way slowly back to the ferry and home. On the way we stopped again at the “GO” shop but the nice young lady was not able to offer us any solution to our problem.

Without an internet connection it was a case of cooking a meal and off to bed, this time to read for Alan had been given a book by “L” about the American Civil War and the Gettysburg battle called “The Killer Angels” by Michael Shaara. It is this book on which the film of the same name is based.

This morning, Wednesday, it was up at dawn again. Today we were to meet “S” one of Hanna’s nieces. The first shock of the day was that it had been raining and was trying to rain again. Alan had to put us in the pockets and do them up so we did not get wet.  Alan stopped at the “GO” shop, on the way to the ferry. We think Alan fancies the young lady or else why does he keep going there when she can’t help us?

In Valletta we went to Costa Coffee as Alan knew they had free Wi-Fi and hoped to catch up with all the news on Facebook and Twitter that we have missed over the last two days. We were early and so not only did he check the Social Networks, but was able to read the Malta Times. The talk here is of building a bridge over to Gozo!! This is cheaper than a tunnel! Not sure the people of Gozo want a bridge or a tunnel for that matter. One article recommended investing the money for a bridge on the infrastructure of Gozo instead. We rather feel that a bridge would spoil the environment, but we know of many such bridges in Europe where similar discussions were held and then the bridge was built anyway. They call it progress! 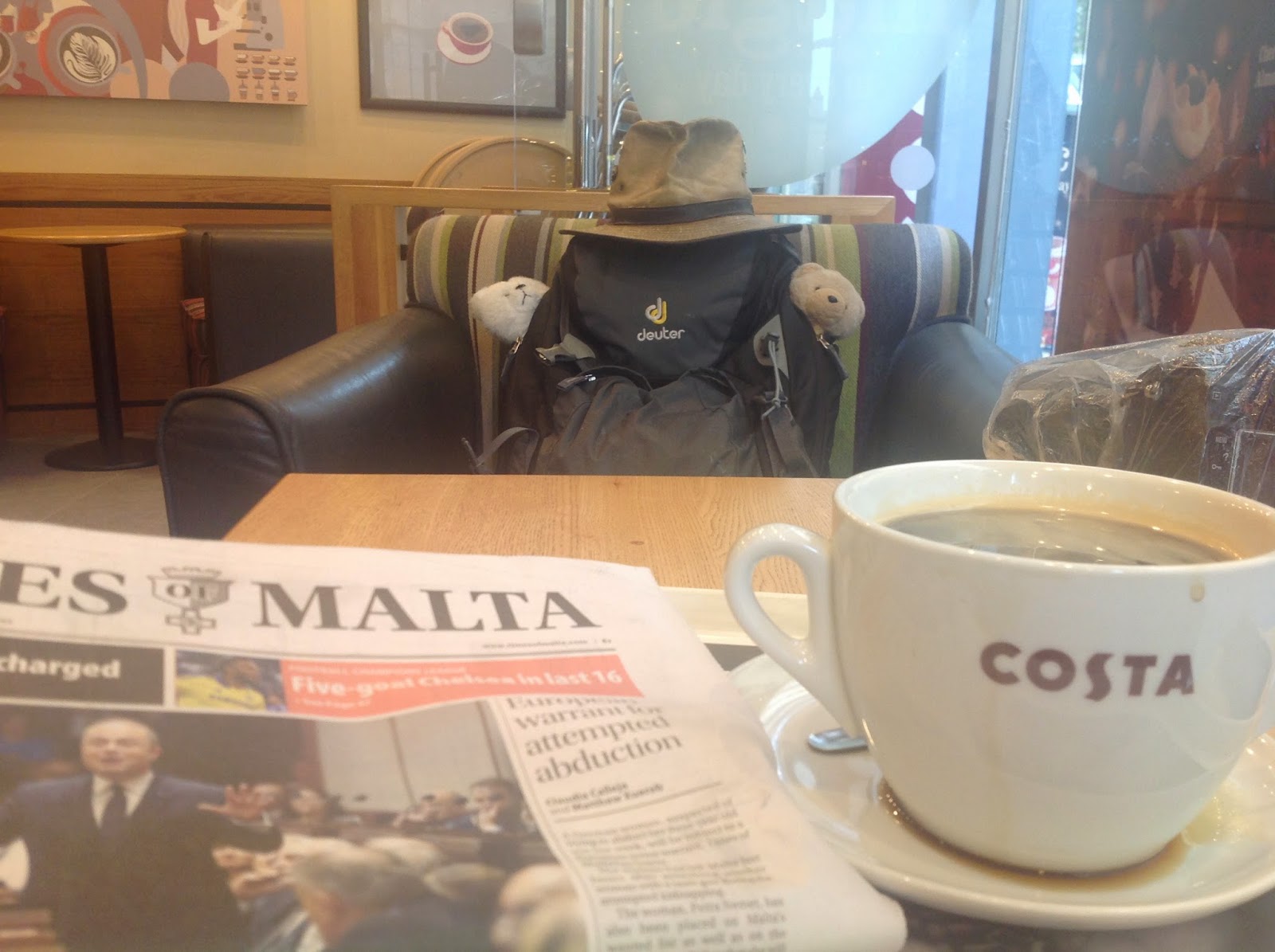 “S” arrived and then there was a lot of catching up to do as they had last see each other in 1995!! We found it a very pleasant morning listening to the humans and watching the world go by. And then it started to rain in earnest. When “S” left Alan stayed to write some emails, had a light lunch and when the rain had slowed a bit left to do some shopping.

Back in Senglea we all had a nap. Then as the rain had stopped Alan went back down to talk to that nice lady in the “GO” shop! What did we tell you? She even took his telephone number!

Strangely we had a connection for a bit and Alan checked up on the super yachts in the harbour opposite us. He discovered that one of the ships out there, the one with the helicopter on the deck, called GARÇON is the support ship to the super yacht ACE also in the harbour!! Some people just seem to have too much money. The crews are all working hard to secure the yachts for the winter.


Since we still have not achieved a workable internet connection by this time, Alan poured himself a glass of wine and sat and read his book. We think it will be early to bed again tonight.
Posted by Alan Tyson-Carter at 20:12