Katie a rather sweet Australian bear living in Melbourne has invited us all to join her for a picnic. http://thehouseonthesideofthehill.blogspot.com/

This caused quite a stir in my house since a decision had to be made as to who was to go. I nearly had a mutiny as they all wanted to go. Since there are well over 60 bears in my house, and I have to say, not all of them are well behaved and can be trusted not to get into mischief, we had to come to a workable solution. Since Pippa and Squeak the matriarch and patriarch of my family more or less entertain friends to tea constantly in their under the table cave, and are now far too old to go off gallivanting in the woods it should not be them. 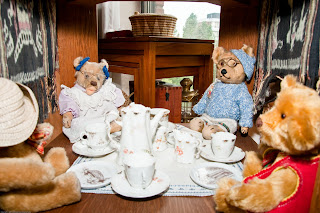 After a lengthy discussion it was decided that three bears should go. The eldest, on the right, is  Wagner, who is a Kiwi (note the passport he is holding in his paw) and was made for me by my mother. He is a circumnavigater since he sailed around the world with me. He is wise and can be trusted with your last piece of chocolate. The one in the middle with his "KARMA" hat is called Fred. He comes from Aitutaki in the Cook Islands and was  given to me by my friends Norma and Clive. Norma felt I needed a bear with a roughy toughy name since she felt most of mine had sissy ones! The bear on the left is also a Kiwi and he is an Americas Cup sailor who joined me in Auckland and so is quite a tough chappy. He is called Bongo. 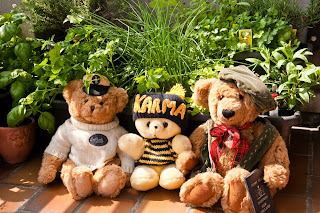 These three bears are great friends, and though they can be trusted not to tell tales or eat your last piece of chocolate they are awful womanisers, so be warned.
Posted by Alan Tyson-Carter at 13:44