COVID 19 and What the World Needs Now!

Have you been in lockdown since 14th March like me? How are you coping? Are you beginning to get cabin fever? Or bored and looking for things to do?

What I can say is that being confined to my fourth floor flat is very much like sailing alone around the world. One is alone on board, and after essential work of setting sails, navigating, and doing minor repairs one is at liberty to sit and watch the world go by. Reading was the main activity for me. Now after essential work around the flat, cleaning and tidying up,  instead of reading I play computer games or chat on Social Media. I have regular contact to friends and family, not via radio schedules, but by Facetime or WhatsApp. The real major difference is that there is no motion (unless I've had one too many) and my bunk is not lying on its ear! 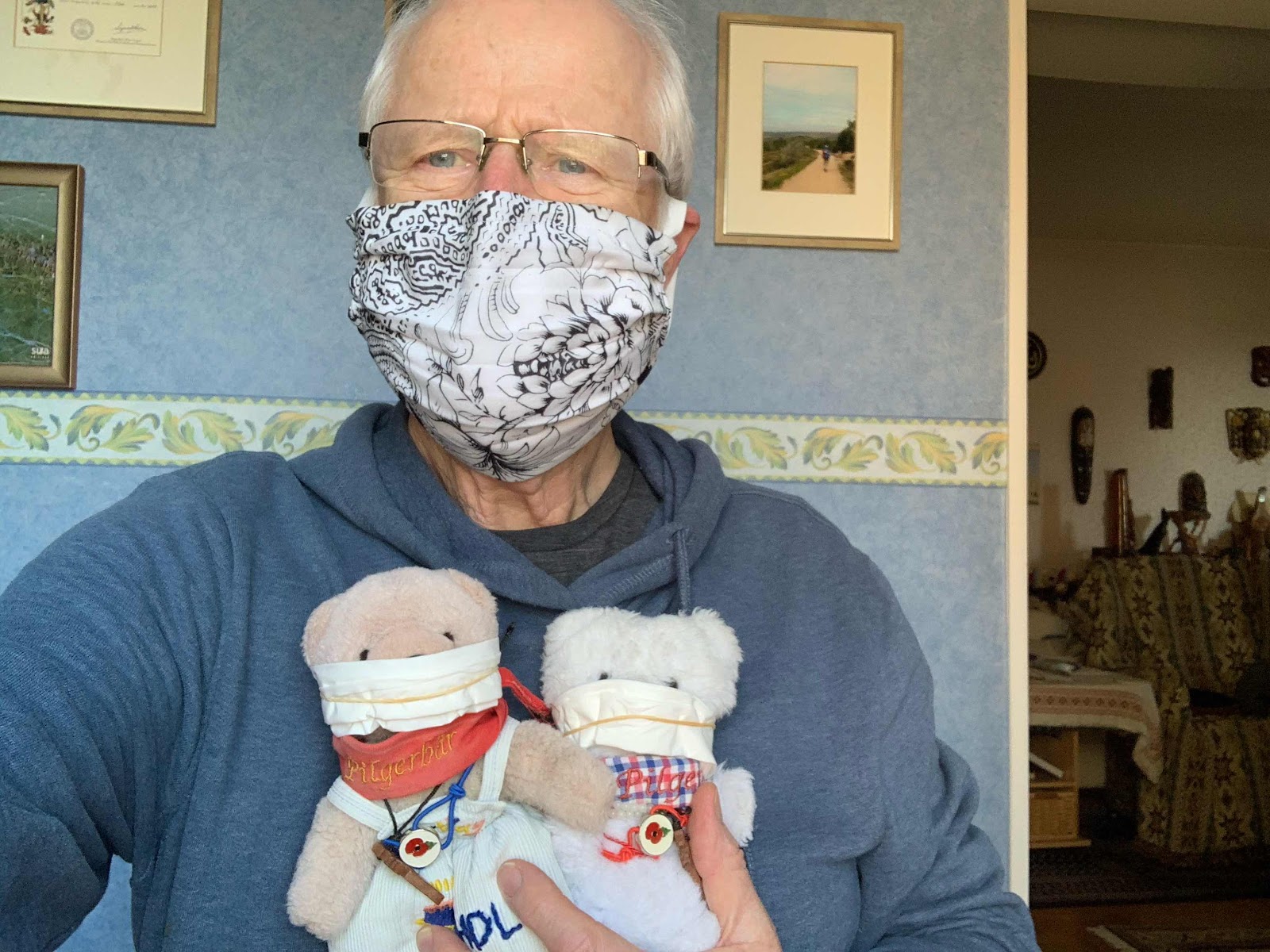 Petra as I indicated in my last blog is working hard to maintain her Patchwork Family and is very strict with us OAPs. She has her hands full with working from Home  and having to care for Vincent as the Kindergartens are closed. But she thinks ahead and orders for us online when she can, or receives the orders from the local Bio Bauer. (Farmer). Now though, we have felt safe enough to go and collect from her, saving just a little of her time.  As we have all been in Quarantine for the last four weeks, we were allowed to have a walk together on Easter Monday, wearing facemasks made by Sigrid and maintaining social distances!

I personally don't have a problem with being shut in my flat, as long as I can get out on my bike once per day I can cope. I've started to declutter my life. Going through old love letters and photos, takes time though and sometimes my mind will only cope with so much nostalgia. The size of the Paper Bin also determines how much I can shred at any one time. It is not as much as I would like, so I often have to wait a week to 10 days before I can resume. It means my flat is a bit untidy as I do not put it all away again, it sits there in various piles waiting for me to begin again with the trip down memory lane.

My main thoughts though are to the future and here I am fearful. I am fearful for the whole World, for it requires not a country by country solution, but a world solution. It is no good that China is on top of the problem now, when the USA and other countries are not. The only way we are going to get to defeat this pandemic is if we work together, sharing knowledge and resources.

Instead each country is competing for the limited resources of facemasks and other PPE (Personal Protection Equipment).

What the World needs now is a dynamic selfless leader to coordinate the effort to defeat the virus, and we don't have one. The Buffoon in the White House is not it. Boris and his BREXIT mentality is also not it, though perhaps if he changed his attitude he could apply his mind to it, but I doubt he will. Ursula von der Leyen is not it either, which is sad, nor is Angela Merkel, though she could be if she put her mind to it. It needs a super power to lead the way.

We do not need to look too far back in history to find examples of how it should be done.
When the EBOLA Virus spread out of the Guinea borders in 2014 President Obama activated the Emergency Operations Centre at the Centre for Disease Control in Atlanta. The CDC was immediately deployed to West Africa to coordinate a response that included vector tracing, testing, education, logistics and communication.

President Obama worked with the UN and the World Health Organisation and rerouted all travellers heading from Africa to the USA to specific airports that were equipped to handle mass testing. In the USA more than 6500 people were trained through mock outbreaks of a pandemic, before a single case arrived on their shores.

Three months after Obama instigated this response a man travelled from West Africa to Dallas and slipped through the testing net. He was, however, immediately detected and isolated, but died a week later. The two nurses that cared for him contracted the disease, but thankfully recovered. All the protocols worked and Ebola was  contained.

Now before anyone knew about COVID 19 even in China, Trump disbanded the pandemic response team that Obama had put in place. He cut funding to the CDC and he cut the US contribution to the World Health Organisation. Trump fired the one person on the National Security Council in charge of stopping the spread of infectious diseases!

When the outbreak started in China, Trump assumed it was China's problem and sent no help of any kind. They were in a trade war, weren't they, so why should the egotist and isolationist (make America great again) help them.

I could go on listing the man's bluffing and blustering, but need not as the virus moves faster and now America and in particular New York is harder hit than anywhere else in the World.

The Spanish Flu pandemic lasted two full years from January 1918 to December 1920. It came more or less in three waves and finally died out in the summer of 1919.  More or less the same methods were tried then to control the spread, though not as successfully as now I would suggest. They didn't have the medicines to cope then, nor did they have a vaccine, just like now. 500 Million people were affected and 50 Million died world wide! This time we are or seem to be slowing its spread, but we have a long way to go before we can return to normal life. Consequently I feel the public need to be warned to dig in and not ease the lockdown or travel restrictions too soon. Countries will ease up because of economic pressures and history will show which countries were more successful than others at controlling the spread.

Stay safe, "for it's a jungle out there"!